Kutaisi is the second largest city in Georgia though much smaller than the capital Tbilisi. It has a relaxed, friendly vibe and we really liked the central area with its bustling park, elaborate fountain and excellent market. There are plenty of interesting sites within day trip distance too, so in order to do them justice as well as reach a few other places in central Georgia we hired a car for our final week. 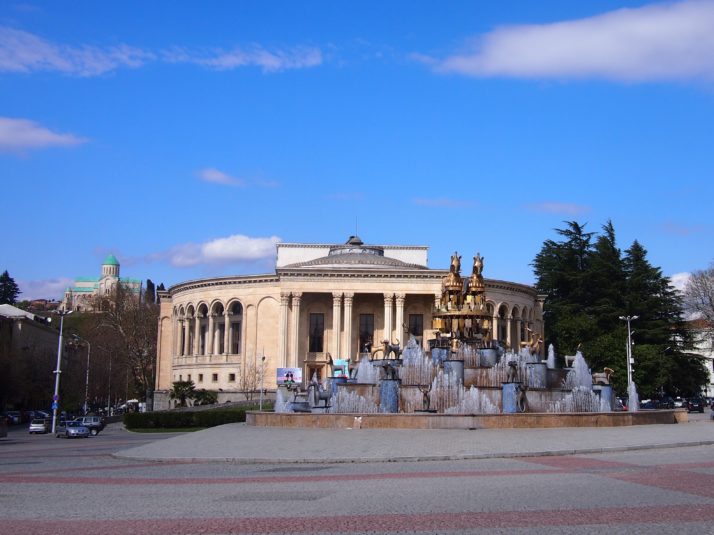 The Colchis Fountain stands in front of the Drama Theatre in the centre of Kutaisi. The Bagrati Cathedral is on the hilltop in the background

The Colchis Fountain forms a roundabout in the city centre and is decorated with large scale replicas of 2000 year old gold jewellery excavated from a tomb in nearby Vani. The Colchis civilization which was responsible for the jewellery has been linked to the Ancient Greek legends of Jason and the Argonauts and their search for the Golden Fleece. (Note to Kutaisi City Council: please make a pedestrian crossing to the fountain so that tourists can get a closer look at the sculptures without getting run over…) 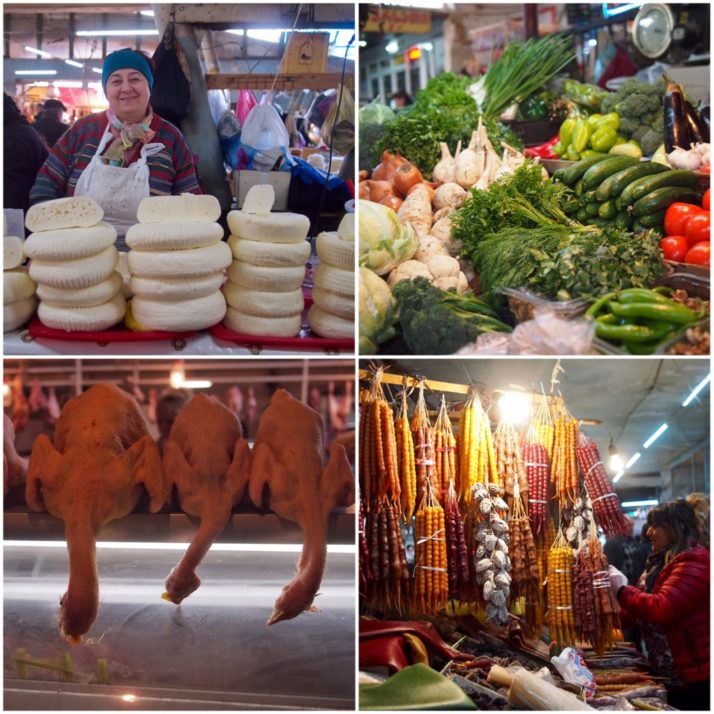 The market was just as friendly as the one we visited in Tbilisi with sellers eager to chat, offer samples and let us photograph their wares

The Georgian Parliament was moved from Tbilisi to Kutaisi by the government of Mikheil Saakashvili to decentralise power from the capital and boost economically deprived Kutaisi. The futuristic building was opened in 2012. Tours inside need to be booked in advance so we just parked up and had a look around outside. On a hill overlooking the city centre stands Bagrati Cathedral, one of two UNESCO listed sites close to Kutaisi. The pale stone walls and green roof have been pretty much completely rebuilt after lying in ruins since 1692 when it was destroyed by the Ottomans. The grounds around it and the view over the city to the Lesser Caucasus mountains are beautiful but we found it rather staid inside. 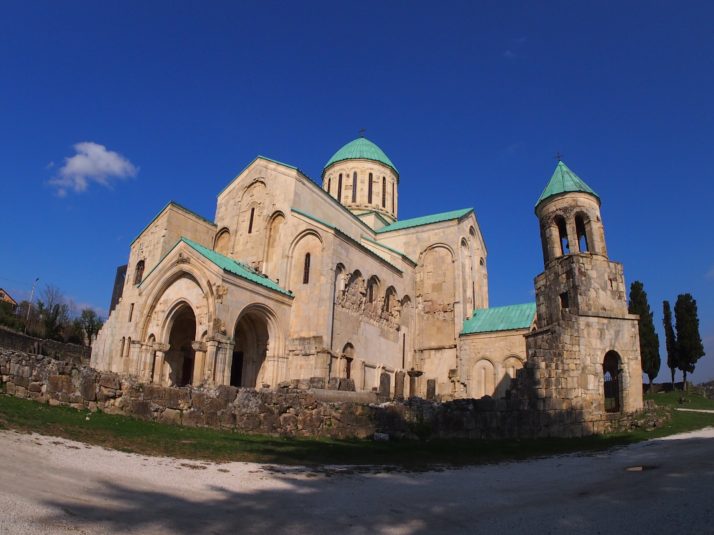 Bagrati Cathedral has been almost completely rebuilt from its ruined state

Under the same UNESCO World Heritage listing as the Bagrati Cathedral is Gelati Monastery, just a 20 minute drive into the hills to the north-east of Kutaisi. We found this much more interesting, from the old monk poking about in the engine of his equally aged car just inside the entrance to the stunning frescoed interior of the main church. The monastery was founded in 1106 by King David the Builder (guess what he was famous for!) as a centre of culture and learning and it retained that reputation until the communists arrived in the 1920s. 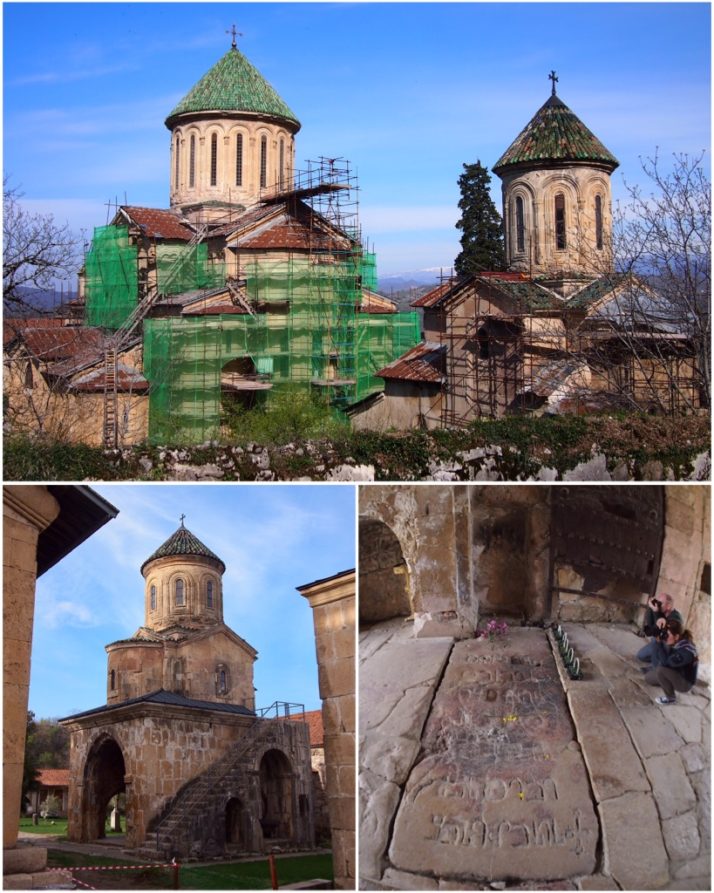 Gelati monastery (clockwise from top): restoration works were being carried out during our visit with rather natty green roof tiles being added to the buildings; Andrew and Jo taking photographs beside the grave of King David the Builder; the small Church of St Nicholas stands on an unusual arcaded base

King David the Builder wanted to be buried in one of the monastery gates so that visitors would have to step on him to enter the complex. The gate is now permanently closed for passing through and today’s visitors take care to not step on the gravestone! 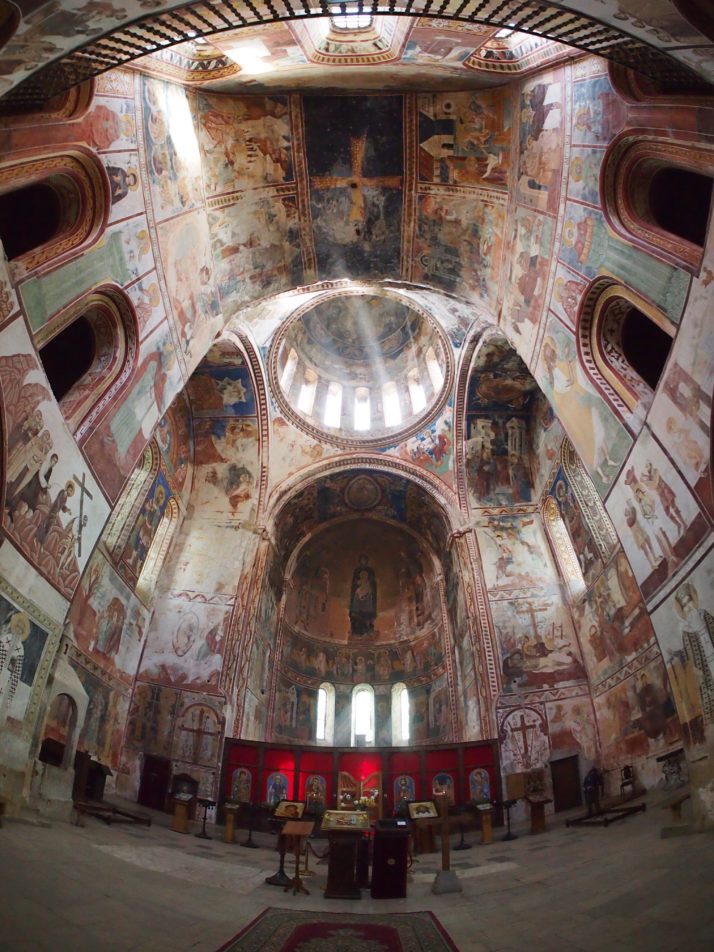 Just down the hill from Gelati is the tiny Motsameta Monastery. Even by Georgian standards its location is spectacular. The church is home to the tomb of two brothers who were killed during an 8th century massacre by the Arabs and who were miraculously carried up to the monastery site by lions. The faithful believe that their tomb grants wishes. 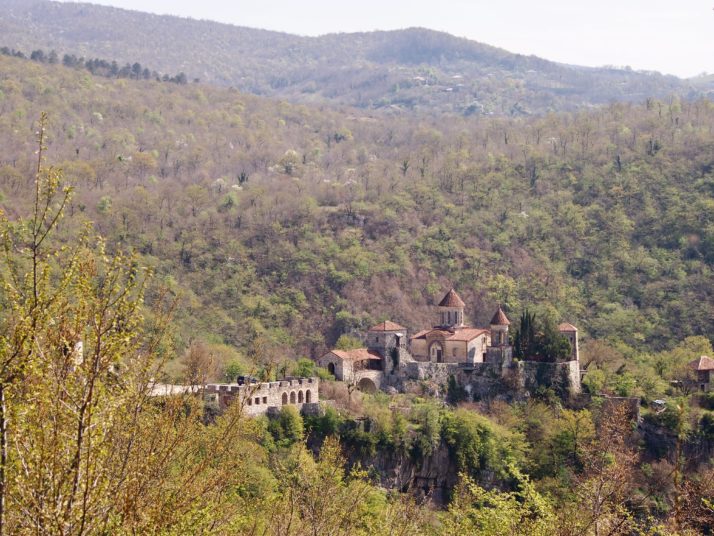 As a break from the churches and monasteries we headed out to see the natural beauty of the area north of Kutaisi. Our first destination was the walkway along Okatse Canyon. Unfortunately I can’t tell you much about it as our GPS directed us onto a rough unsurfaced road which was bad enough, but by the time we reached the bridge at the bottom of the valley that it expected us to cross we decided to give it up and head on to our next stop instead. Rough road detour north of Kutaisi: (top) with hindsight we should have turned around here instead of driving for half an hour to the river where we were forced to retrace our steps rather than crossing this very rickety looking bridge (bottom)

The Prometheus Cave is 1.4km long and the concrete walkway passes through six large chambers full of impressive stalactites and stalagmites. Entry is by guided tour only and we ended up with a Russian group rather than waiting over an hour for an English-speaking one. In the end that was probably better as we didn’t feel obliged to keep up to hear what the guide was saying and just hung back taking photos! Our Lonely Planet describes the lighting in the cave as ‘discreet’, the word I would use is lurid, but I suppose it creates some interesting effects on the rock formations. I found the Vivaldi background music less offensive as it served to dampen the echoes from the large group. Prometheus Cave (clockwise from left): Andrew admiring some stalactites; the ‘discreet’ lighting on the rock formations; cross-section through a broken stalactite

Our final stop of the day was at the Sataplia Nature Reserve, an area of sub-tropical Colchic forest, home to birds, wildlife, and fossilised dinosaur footprints! Spring flowers were beginning to bloom on the forest floor and with the sun shining it was a very pleasant walk along the trail to the Sataplia Cave, which honestly was not particularly impressive after the Prometheus Cave. 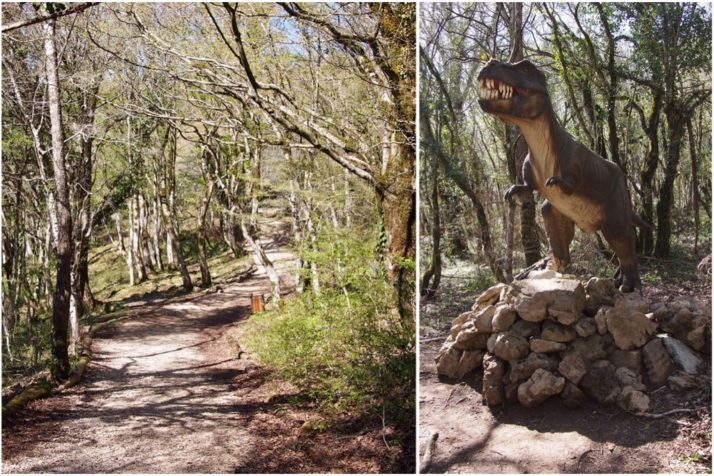 Sataplia Nature Reserve: one minute you’re walking along a woodland path…the next, dinosaurs!

The word Sataplia means ‘place of honey’ and is so called because of the tradition of collecting honey from the bees found in this area. There are a couple of great viewpoints along the trail including a glass floored walkway which reminded us of the glass path that we walked on at Zhangjiajie in China. The one here was closed when we visited but we could get close enough to see the view. Gorgeous view over Kutaisi and the Lesser Caucasus from Sataplia 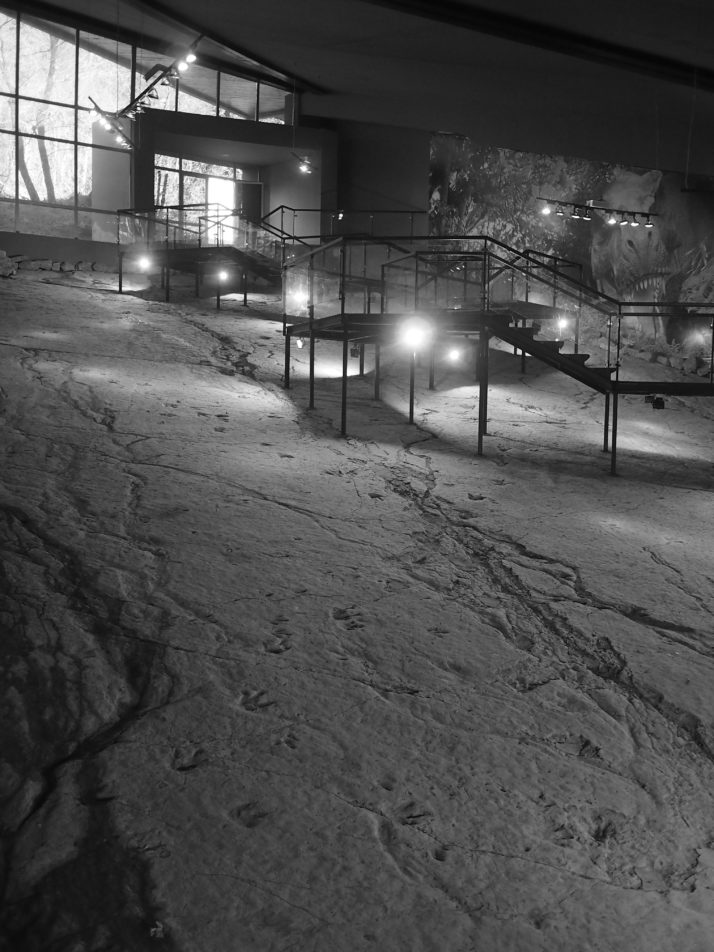 70km east of Kutaisi is the small mining town of Chiatura. It’s very much off the standard tourist radar but we’d read that there are several still-functioning Soviet era cable cars linking the town centre with the mines and residential areas in the hills above so we stopped off for a brief visit to frighten ourselves with the rickety contraptions. On the way to Chiatura we visited the Katskhi Pillar, a monastery atop a rocky outcrop. Apparently one monk still lives up there!

The first cable car we rode had a lady operator who was in charge of locking the door and stopping and starting the system. At the top we seemed to have reached a residential area though we didn’t venture far from the station. That car ran at 15 minute intervals and there was no charge or ticket. On the way down we were sharing with (among others) a chatty old lady who wasn’t going to let her lack of English or our lack of either Georgian or Russian stop her from finding out all about us! 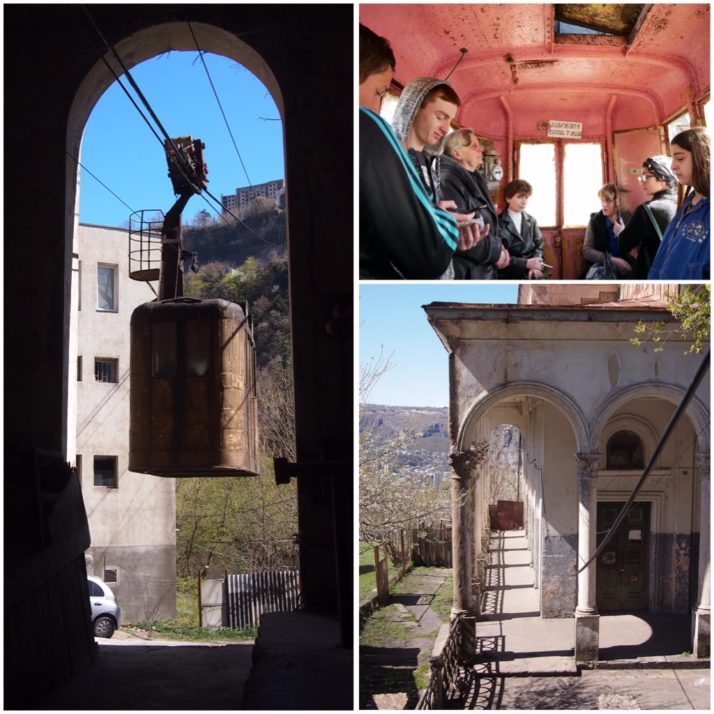 Chiatura cable cars (clockwise from left): cable car arriving at the bottom station; inside the cable car, the lady in the leather jacket (centre left) is the operator; the stations must once have been grand but are now in the same level of disrepair as the cable cars 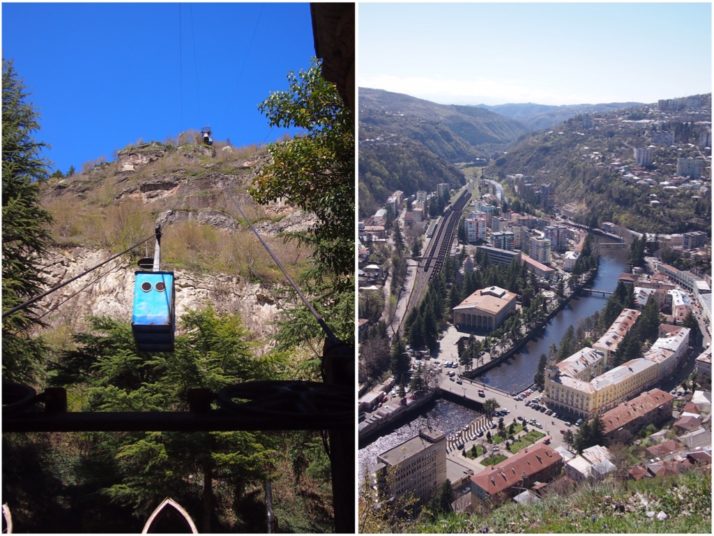 The second cable car we rode was on a particularly steep line. At the top we found a mine entrance and a spectacular view down to the town

Final mention should go to our rental apartment in Kutaisi. We didn’t quite believe the pictures on the booking website but it really was as grand as it looked! 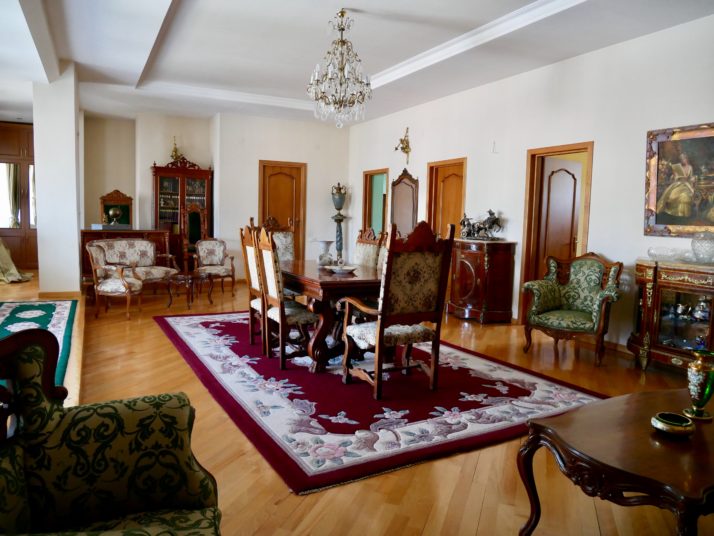