This is a guest post from our good friend Jo who came out to tour Uzbekistan with us. Take it away, Jo …

Although it shares with Samarkand similar grand architecture, Bukhara is a very different place to visit – better-preserved, but because of that, more touristy.

The city has had a series of incarnations but has always been of significance, either politically or religiously. From the 16th century to 1920 it was the capital of a ‘khanate’ before being captured by the Bolsheviks. In 1924 the city was absorbed into the Uzbek SSR.

Despite the Russians, Bukhara is still at its heart a medieval city and most of the mosques and medressas survive in good condition. The most spectacular sight, which we returned to at several different times of the day, is the Kalon Minaret – built in 1127, this 47m high tower has survived the invasion of Chinggis Khan. It was partially damaged by the Soviets but has been well-restored and its golden brick patterns reflect the light beautifully. 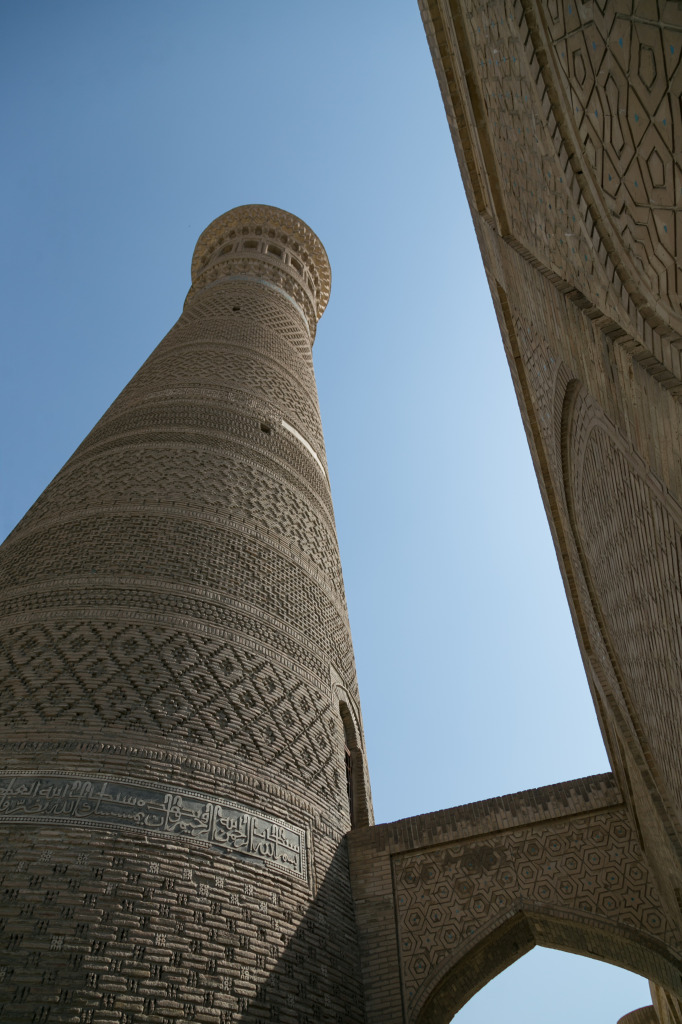 We began our three days of wandering around Bukhara’s baking hot streets with the Ark. Sadly this great construction does not float, although there was a solitary camel standing outside for tourists to have their photo taken with. Unlike much of the other architecture we’ve seen, the Ark is not a religious building but instead was a fortress and palace for the Emirs of the khanate. 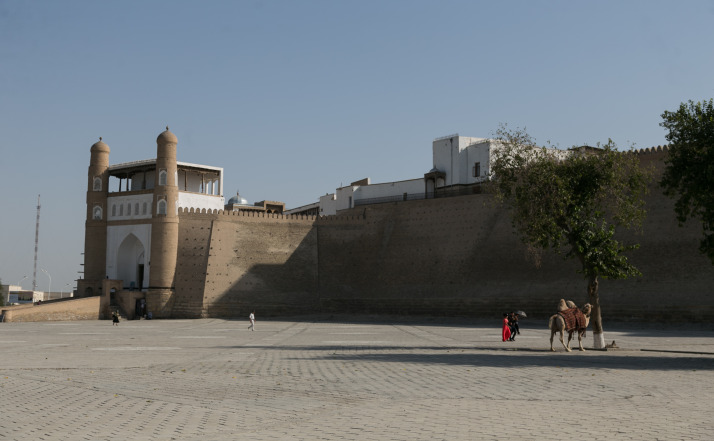 The Ark and its walls

It’s also a bit like a reverse TARDIS, as much of the vast inside is inaccessible. Many of the buildings are now used as little museums of Bukharan history, some more interesting than others. We shared the experience with loads of tour groups, the first we’d really seen in any number, and as it was a Sunday, lots of locals too. Any prospective visitors should note that the entrance fee of 4,500 sum is separate from a 4,200 sum fee for a guide – we managed to get the latter back on exit as we a) hadn’t been offered a guide, and b) hadn’t wanted one.

Bukhara also has any number of smaller mosques and mausoleums. We passed several of these in our wanderings, including the Chashma Ayub Mausoleum, where apparently Job found water by banging the ground with his staff, and the lovely 9th-century Ismail Samani Mausoleum. 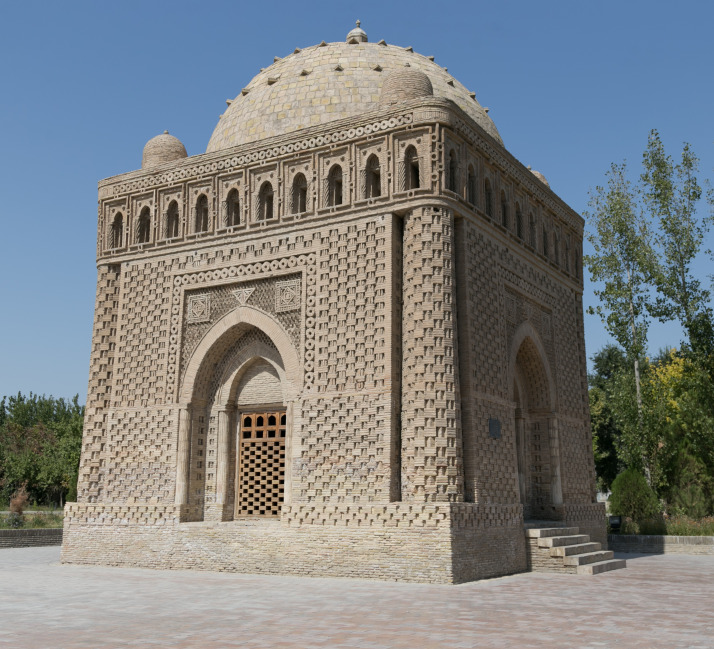 Of course we also looked at the bazaar nearby and had a truly excellent lunch of plov for the kingly sum of about £1 each, including free of charge a friendly conversation with the nice chaps at the next table, who didn’t seem to mind that we couldn’t understand more than a couple of words of what they said. 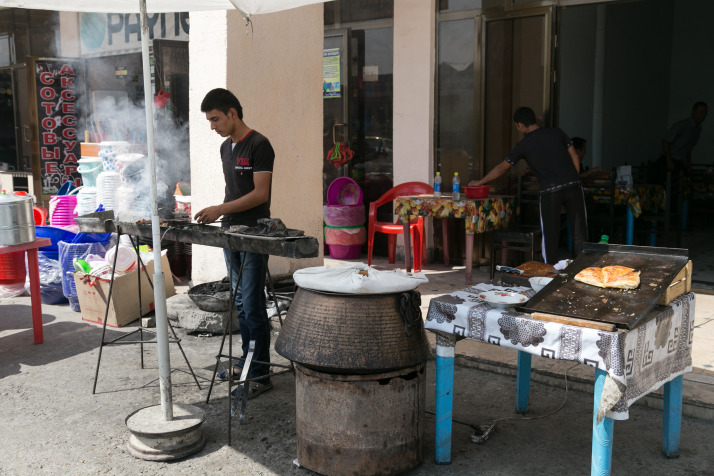 On day two in Bukhara we started out by visiting the cute little Char Minar, once a gatehouse for a medressa. The towers aren’t minarets but just decoration, we were able to climb to the roof to see the old town from a different perspective. 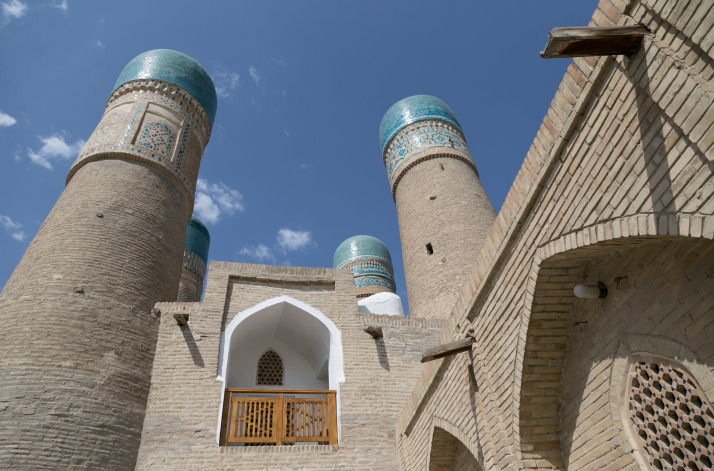 We also went into the Kalon Mosque next to the minaret. Julie and I went to the effort of putting on headscarves as it asked us to, but frankly we shouldn’t have bothered as nobody else did. The mosque, which can house 10,000 worshippers, is vast in size although it’s mostly an empty space with some more beautiful tilework. We felt it was a bit overpriced at 6,000 sum (£1.20 – but a lot in Uzbek terms!). We declined the offer to spend 45,000 sum (£9) each to climb the minaret, although we would have liked to. 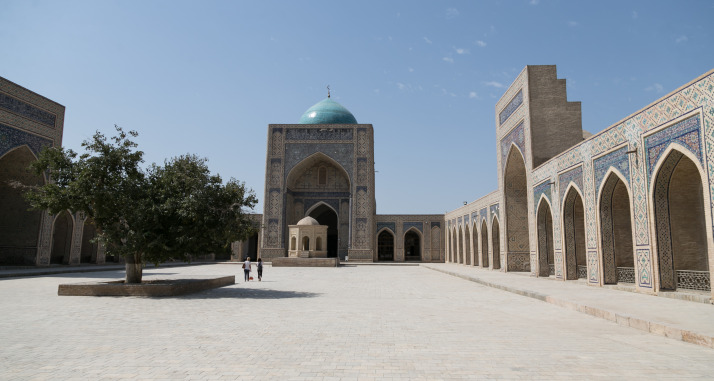 The courtyard of the Kalon Mosque

On our last day in Bukhara we ventured off the beaten track a little, first venturing to a couple of medressas that were on the map but not described in the guidebook. One was closed, but the door was open to the other so we poked our noses in. There was (predictably) a souvenir shop but mainly the place was under renovation. In search of the stairs to the second floor one of the workers invited us into his workshop-come-living space, where he turned the lights on to show us a large owl! Apparently he’d brought it up from an owlet and it ate mice and snakes. An owl was the last thing we expected to find in a medressa, but it was a nice surprise. 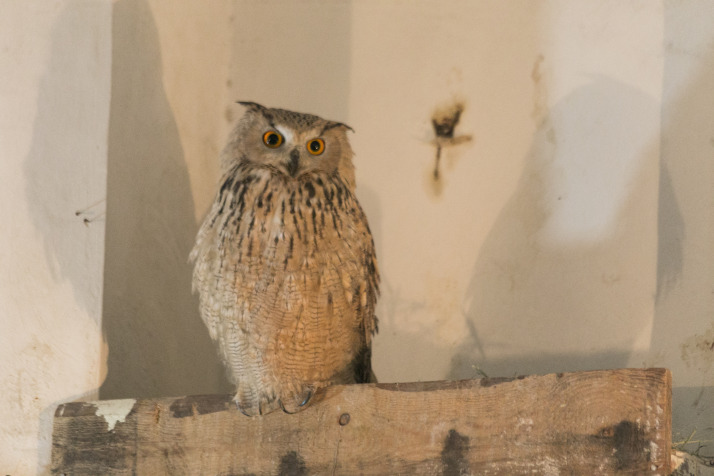 We wandered through the streets of the old town to the Jewish cemetery in increasingly hot sunshine and finally retreated to the ‘small’ market for another bowl of good plov.

There wasn’t much left to see in Bukhara, so we spent a pleasant hour in a teahouse drinking spiced tea and coffee and eating local sweets, and also visited an excellent contemporary photo gallery full of portraits of local Bukharans.

Overall we enjoyed our three days in Bukhara. More would have been too long as it’s not the largest town in the world, but it was so hot it was nice to retreat back to our guesthouse (the hospitable Sarrafon B&B) in the afternoons for a rest in the shade.

After Bukhara, we got in a car and were driven seven hours across a flat and featureless desert to the next stop – Khiva.

Oh, and the title for this post? If you ask a Bukharan shopkeeper, everything they sell is “almost free”.