We’ve visited Switzerland before as our good friends Heidi and Olivier live there. This time around we had an action packed week in the country, staying with them at their home in Bern for most of the time and ending with a couple of days in Geneva. Here are a few of my highlights:

I didn’t learn to ski as a child and although I’ve tried it as an adult I think I’m too afraid to really get into it. Sledging on the other hand turned out to be much more my cup of tea and we had an absolute blast on the Saturday of our stay. 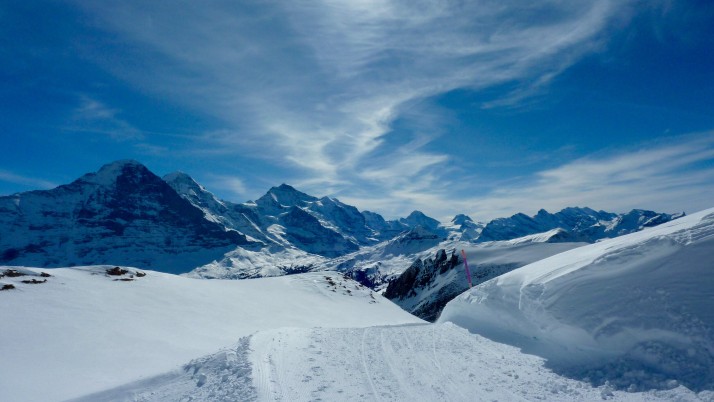 Grindelwald is about a 1.5 hour drive south-east of Bern and is home to the longest sledging run in Europe – a total length of 15km and a descent of 1600m. From the village we caught a bus partway up the mountain to Bussalp where it was time for a fortifying glass of gluhwein (mulled wine) and a slice of Swiss fruit and custard pie on a terrace with views across the valley before hiring our sledges and beginning the hike to the top of the hill. 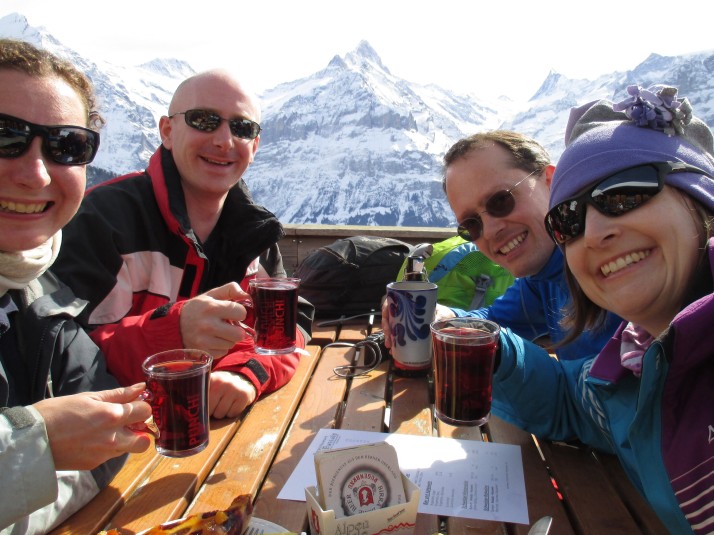 Gluhwein to give us energy for the climb! [photo credit: Heidi Kern]

The information website claimed that it was a 2.5 hour hike from Bussalp to the top of the sledging run and while this may very well be true if you’re walking unencumbered, for us it was closer to a three and a half hour uphill slog dragging the sledges behind. 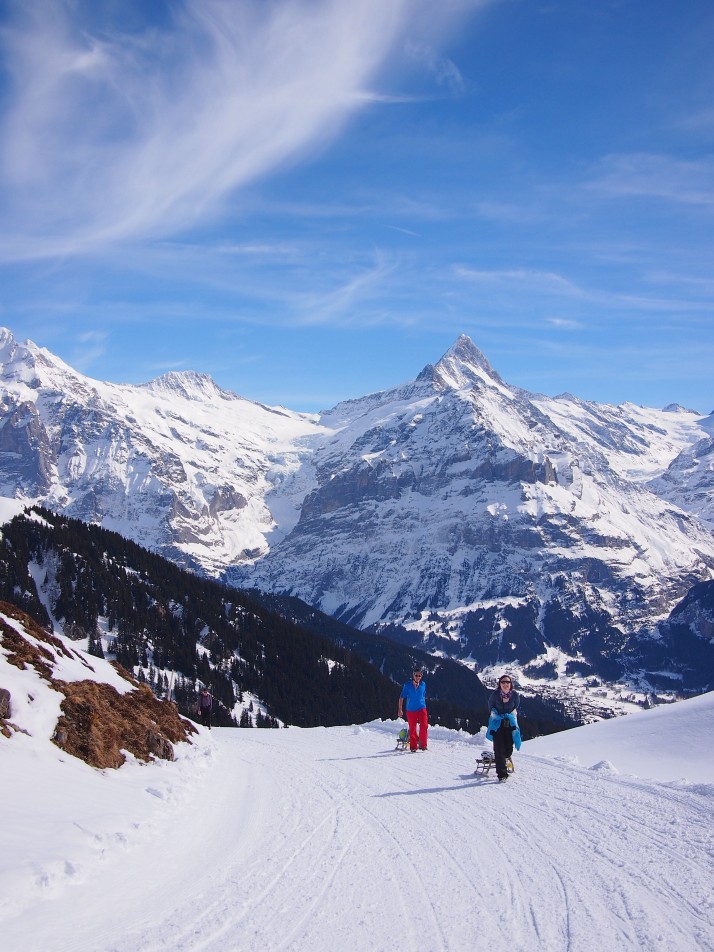 The sunshine and views kept us smiling as we trudged uphill

Eventually we reached the top and were able to begin the descent. It seemed a little unfair that it took less than an hour to sledge down the section that had cost us so much energy to climb. As we’d walked up we’d seen others sledging down and seeming well in control of their sledges, we felt much less in command and both ended up ‘off-piste’ at least once. It took much less time to get to the bottom than it had to reach the top – Andrew and Heidi zip downhill while Olivier looks concerned as I lay face down cackling like an idiot after crashing my sledge!

At times our stay in Switzerland felt like a bit of a cheese fest which is no bad thing as far as I’m concerned. Most people will have heard of cheese fondue, a famous Swiss dish, which Olivier cooked for us one night. Another local specialty is raclette which Heidi has made for us before and which we enjoyed again. For raclette, melted cheese is used to top boiled potatoes and pickled vegetables. Cheese also featured in miscellaneous breakfasts and lunches during our stay so that we thought that maybe we might need a cheese free few days after we left. Then we remembered that our next destination was France – better just buy a bigger pair of jeans now… 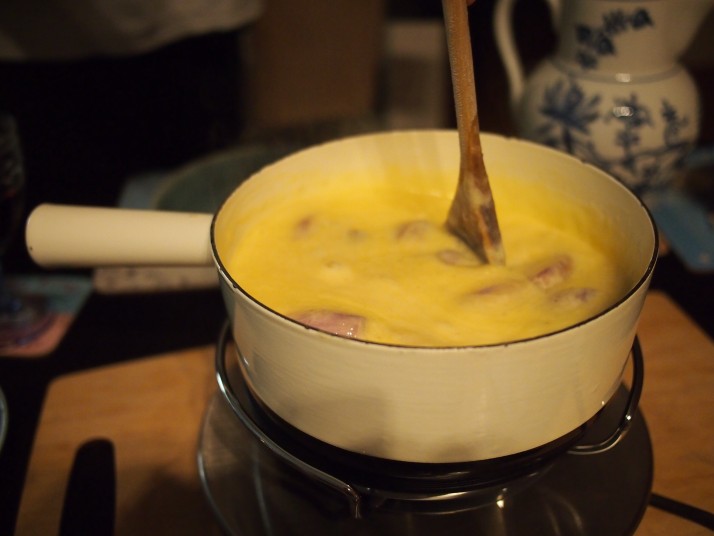 One evening we enjoyed cheese fondue for dinner. The purple bits are shallots which cook in the hot cheese as you dip in chunks of bread and are then ready to eat at the end of the meal

One of the cheeses which is almost always included in the mix when making a fondue is Gruyère, named after the medieval town of Gruyères. Although it’s technically a town, with a population of only about 2000 people, Gruyères is smaller than many villages. At its centre is a pretty town square (naturally surrounded by cheese shops and restaurants serving fondue) and at its eastern end is the castle with a fine view down the valley. 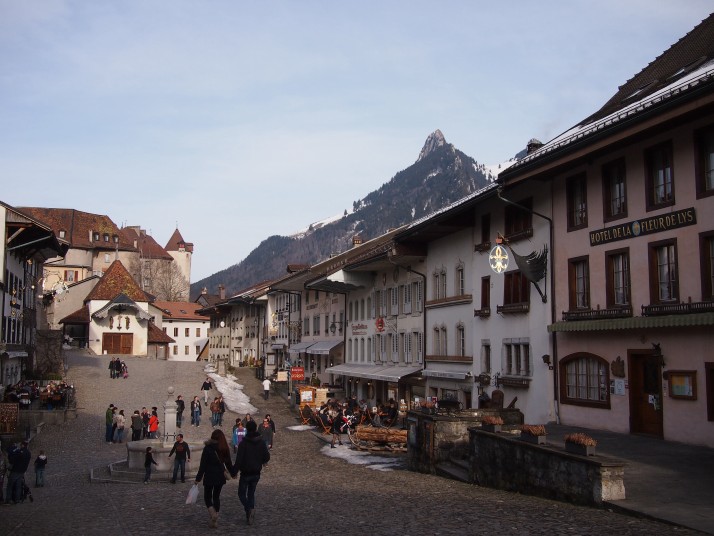 The pretty town square in Gruyères 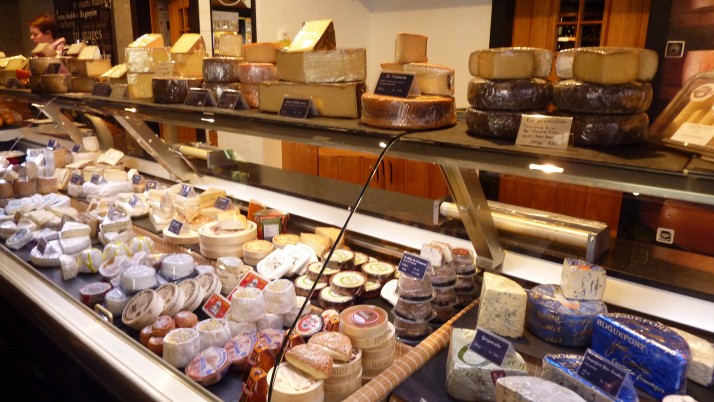 Switzerland’s cities are generally very well preserved and lovely places to visit. Luzern turned out to be no exception to this rule. The compact historic centre is full of half-timbered buildings with paintings on their fronts and is home to the oldest covered wooden bridge in Europe, the Kapellbrücke (Chapel Bridge). The bridge which dates to 1333 was originally 285m long and part of Luzern’s fortifications. In the 17th century painted wooden panels were added along its length under the roof, sadly 81 of these were destroyed by a fire which broke out on the bridge in 1993. Luzern’s Kapellbrücke zigzags across the River Reuss; only around 30 of the bridge’s paintings now remain Unfortunately the city walls don’t open until Easter but it was worth the walk up to them for the view across the town and down to the lake. 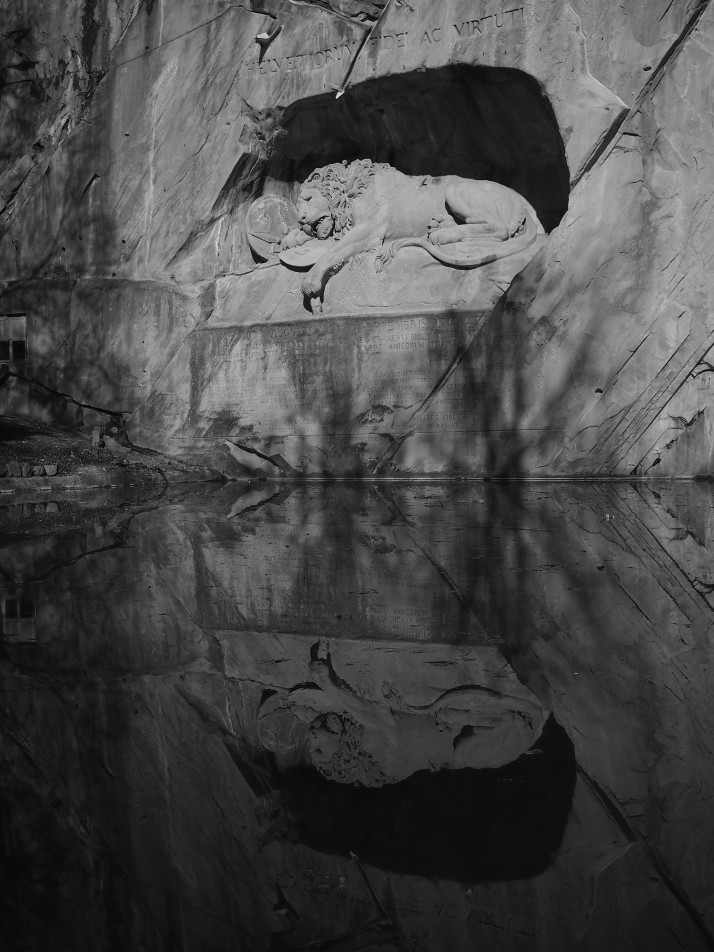 In the afternoon we ventured out onto Lake Luzern for a one hour round trip cruise (Rundfahrt in German which tickled our childish sense of humour no end). Although it was a bit hazy the mountain views were beautiful. 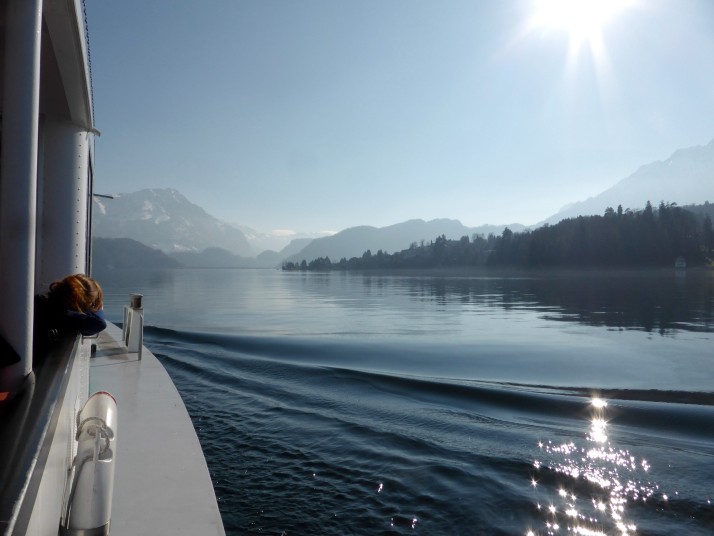 A beautiful afternoon for a short cruise on Lake Luzern

We considered moving into Heidi and Olivier’s spare room but eventually decided that we ought to move on so we headed to Geneva for a couple of nights. One of the things which Geneva is famous for is CERN – the European Organisation for Nuclear Research – and Andrew discovered that it’s possible to take a guided tour there, it’s even free! 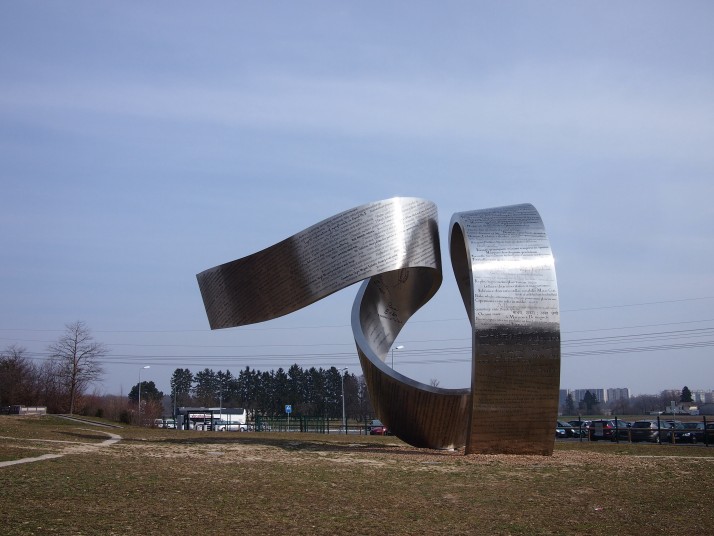 The ‘Wandering the immeasurable’ sculpture is the first thing you see when you get off the tram at CERN. It is engraved with great discoveries in physics from throughout the ages

After checking in at the reception, our group was met by our guide Anastasis, a computer scientist. He gave us some background on why CERN was set up (to create a centre for science in Europe after WWII and be a place where different countries could collaborate) before leading us to the 600 MeV Synchrocyclotron, CERN’s first particle accelerator, built in 1957 and decommissioned in 1991. It now serves as part of a very fancy audio visual display to explain how particle accelerators work. We’d read that final preparations were in progress to restart experiments in the Large Hadron Collider (LHC). I knew that the huge particle accelerator is an important part of the science done at CERN, and certainly the highest profile, but I hadn’t realised that basically everything is centred on those experiments. Our next stop was at the control centre for the ATLAS detector, one of four points where the data from the particle collisions is collected and analysed. ATLAS detector control centre, the mural on the side is one third the real size, and the actual detector is 100m below ground

Anastasis’s explanation of the data collection was even more mind-blowing than the idea of tiny fundamental particles whizzing around and banging into each other. When the collider is operational, thousands of collisions happen every second generating 40TB of data. This is a staggering amount of information – equivalent to 8,500 DVDs every second. Fortunately the clever folks here have algorithms to sort it and filter that 40TB down to 300MB which is still quite a lot but can at least be feasibly stored. 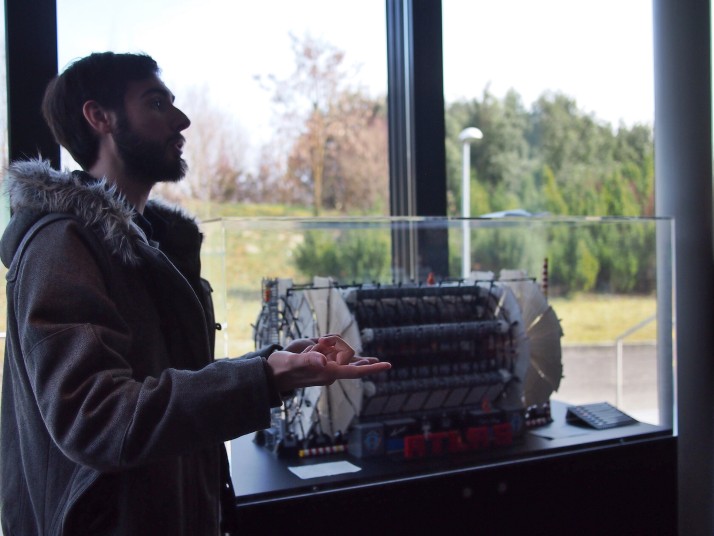 I could go on for ages with the fascinating stuff that we learnt on the tour but I’ll finish with our favourite fact from the visit: when a proton is zooming around the particle accelerator at close to the speed of light it has the same mass as 6.5 mosquitos. We’re going to think of that every time we swat one from now on!