We find cemeteries to be fascinating places to visit – they give an insight into a country’s religion and cultures as well as often containing sculpture and interesting architecture.  All of which makes them great places to take photos.

In Cuba we found cemeteries to be peaceful, hassle-free places to explore, though be warned if you want to follow in our path, there’s rarely any shade and the heat can be brutal in the middle of the day.

Here’s a selection of my favourite photos from the Cuban cemeteries that we visited. 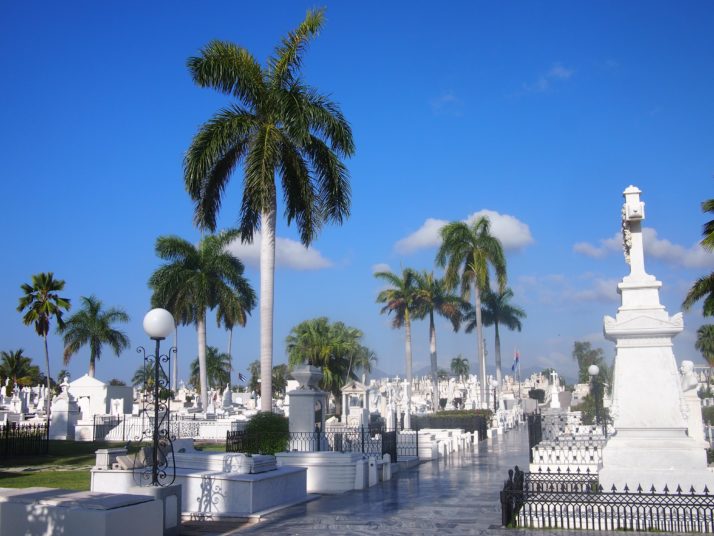 The first cemetery that we visited was Santa Ifigenia in Santiago de Cuba, a sea of white marble and palm trees against the blue Caribbean sky Inside José Martí’s mausoleum, the casket is draped in a Cuban flag and catches daily shafts of sunlight in response to a line in one of his poems about being buried with his visage facing the sun 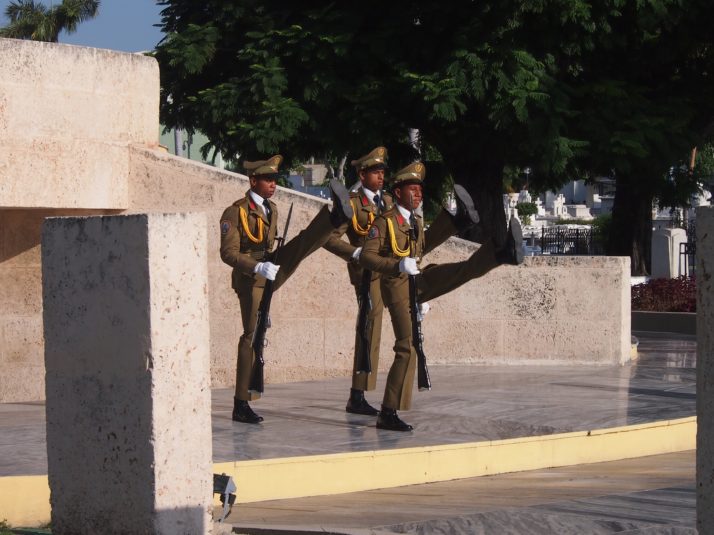 There is a twice hourly changing of the guard ceremony at José Martí’s tomb. At 8.30am we were the only ones there, by 10.30am the audience lining the path was large. All the cemeteries we visited had mausoleums for soldiers killed during the revolutionary fighting, this one honours those who lost their lives during the Moncada Barracks attacks 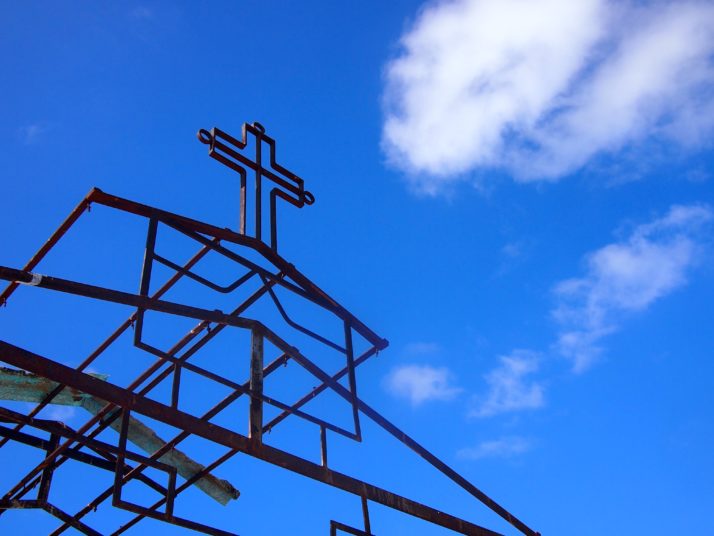 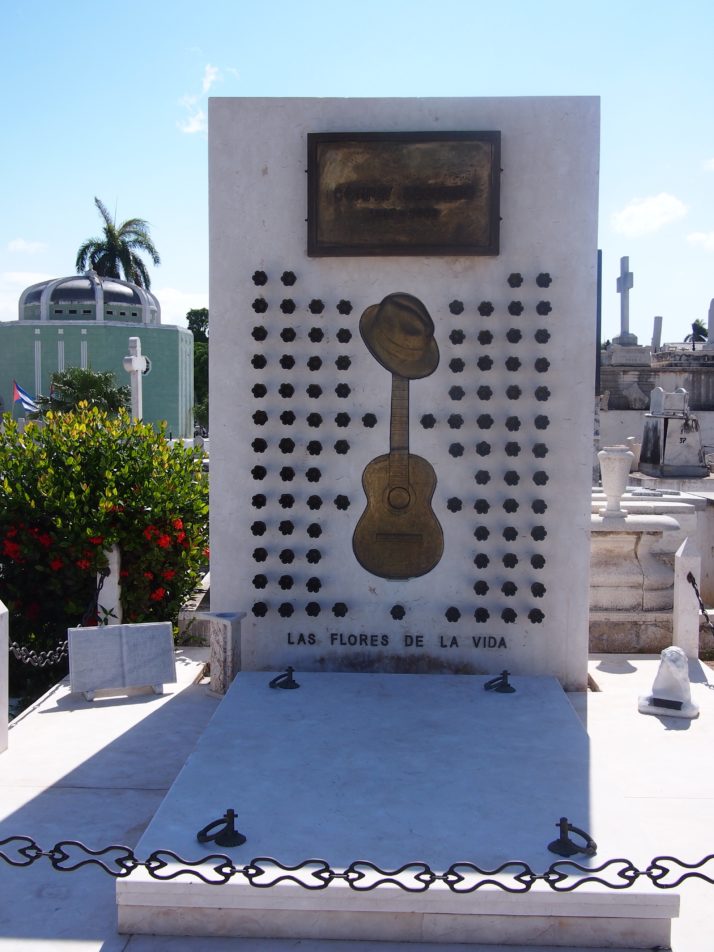 Every cemetery we visited had huge blocks containing square niches, presumably for ashes (there was usually a crematorium building hidden in a back corner as well). Some were simply decorated with the deceased’s name either handpainted or scratched into the wet cement while others had professional plaques, flowers or other decorations 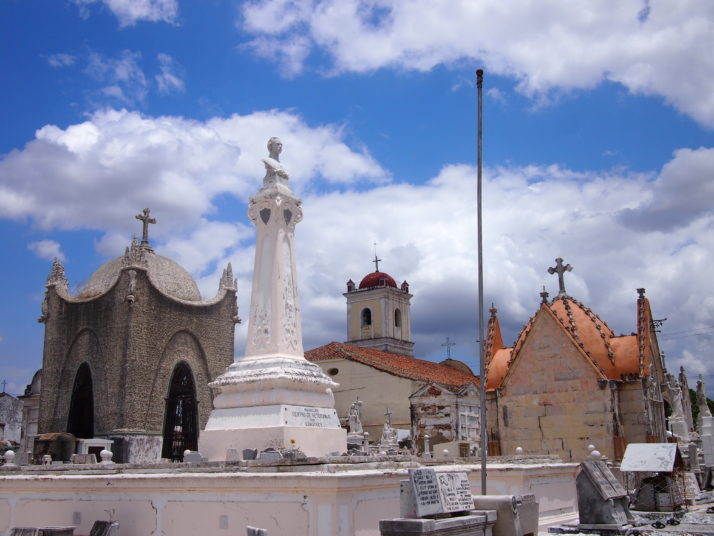 The cemetery in Camagüey was one of my favourites and with barely any other visitors (and no other tourists) we were free to have a good look around. These grand tombs are close to the entrance near the Iglesia de San Cristo de Buen Viaje (Church of St Christopher). 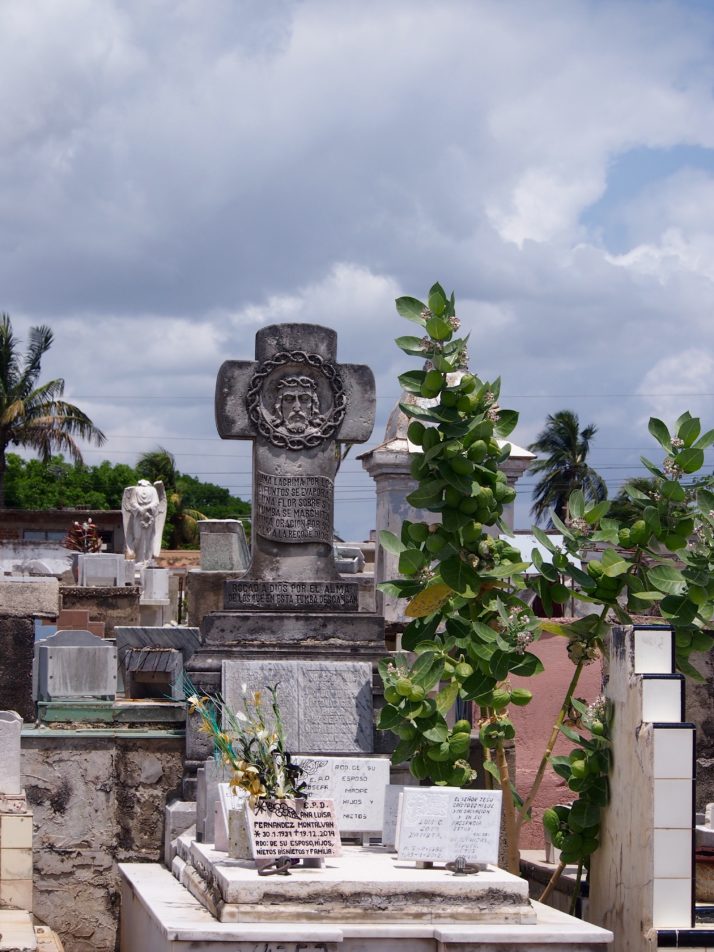 Plots often seemed to contain whole families with a crowd of plaques on top of the grave, each carrying a different name 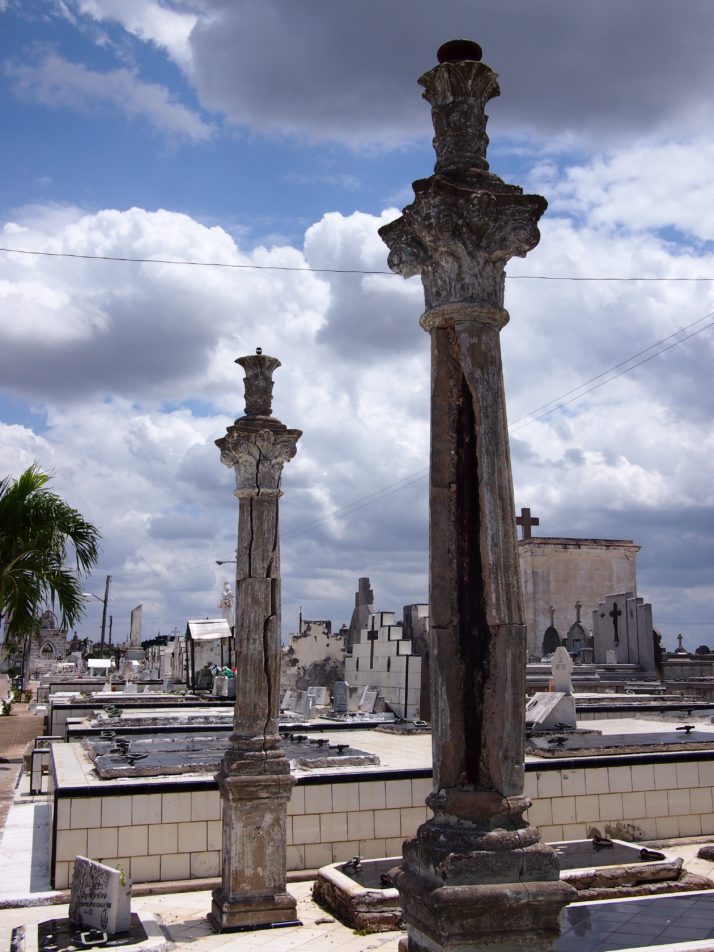 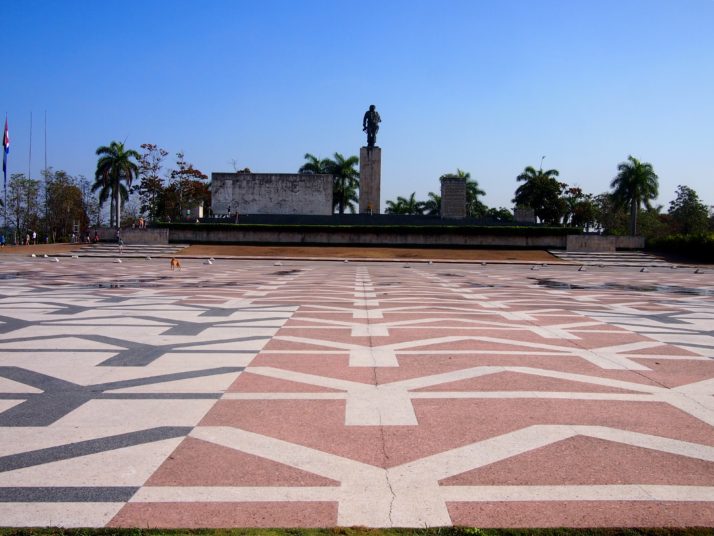 In Santa Clara we didn’t visit the cemetery but the city is home to the most famous mausoleum in the country which contains the remains of Ernesto ‘Che’ Guevara and 16 of the 37 fighters who were killed alongside him in Bolivia. Underneath the statue is a peaceful room of remembrance and an interesting museum documenting Che’s life. 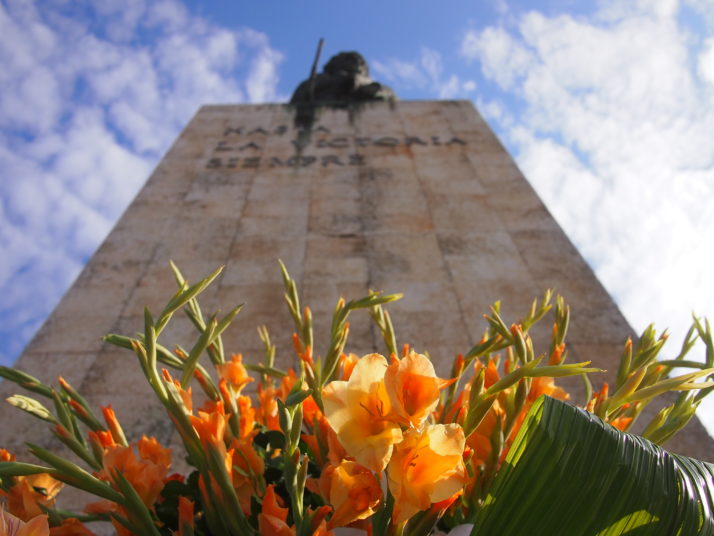 Fresh flowers are placed below the statue of Che each morning. The most famous grave in the cemetery belongs to Amelia Goyri, also known as La Milagrosa or miracle-worker. She died in childbirth in 1901 and was buried with her son. The story goes that when the grave was opened some years late Amelia’s body was uncorrupted and the baby was found not at her feet but in her arms.  Since then locals have prayed for her to help with their hopes for children, new houses, etc and now several nearby plots have been overtaken with thank you messages from thoses whose wishes have been fulfilled. 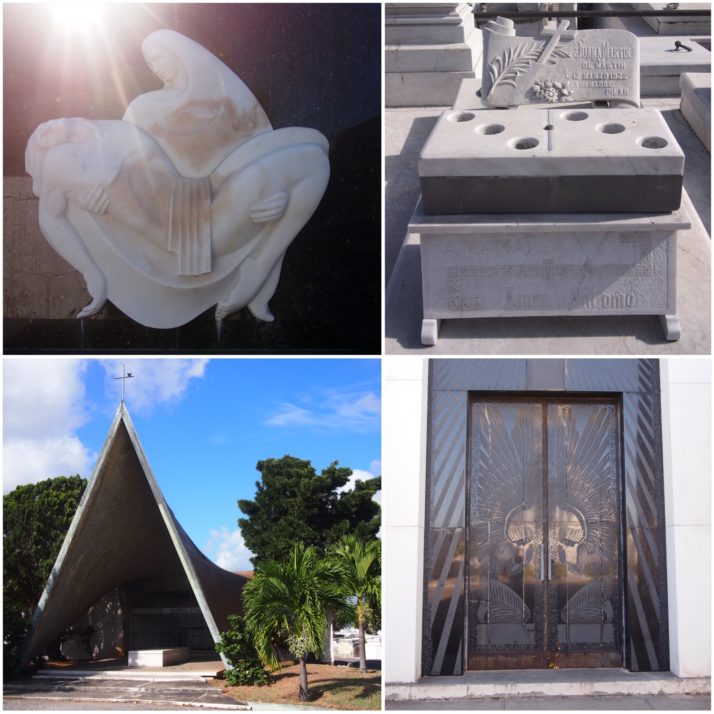 We enjoyed some of the modern graves in the Necrópolis Cristóbal Colón (clockwise from top left): a modern take on the Pietà by sculptor Rita Longa; according to the internet (!), Juana Martin died while playing dominoes; the glass doors on the pantheon of the Baró family were designed by Lalique; tomb of Nuñes Gálvez But there is plenty of beautiful white marble as well There were a number of mausoleums for societies like this one for the Japanese Colony of Cuba. Inside are walls of square niches. 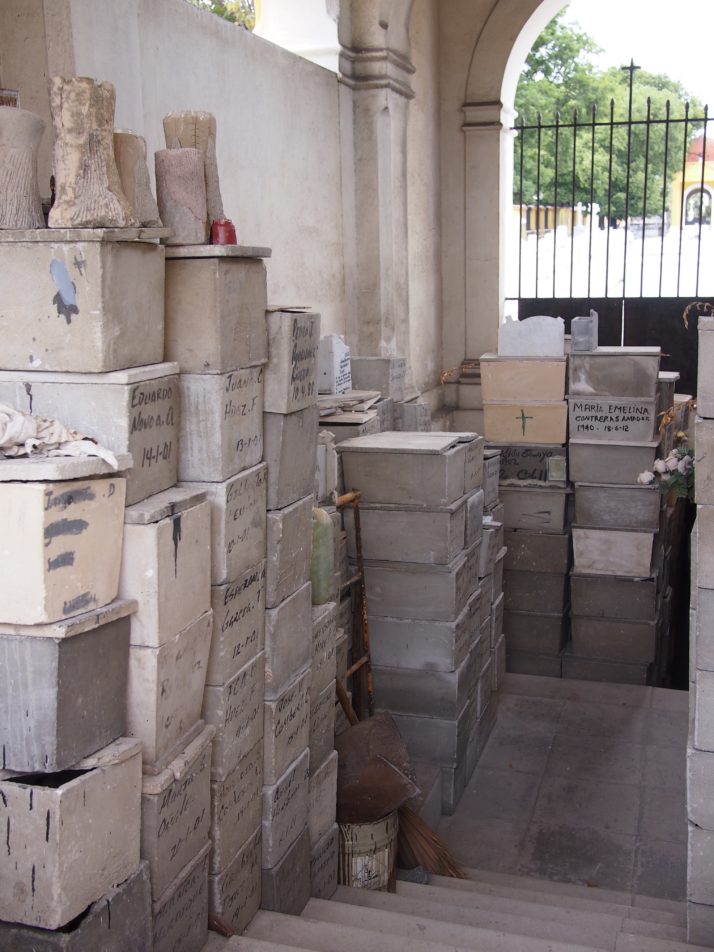 The Tobías Gallery is a 100m long underground gallery. We couldn’t enter but from what we could see from the doorway it looks to be piled high with small boxes like these which presumably contain bones or ashes We visited the cemetery in Trinidad mainly to have a destination away from the tourist-filled city centre. We were rewarded with this tropically apocalyptic view. Flowers dry out very quickly in the hot Cuban sun and many graves had fake rather than fresh flowers. This grave is topped with a statue of Babaluaye, one of the orishas from Santeria, the religion fused from African animisism and Catholicism. It also holds what I think is the remains of a cigar A forlorn and battered cherub tops a tomb in Morón