Our final stop in Georgia was the once thriving southern spa town of Borjomi, famous for its warm and fizzy restorative mineral waters as well as being the gateway to the Borjomi-Kharagauli National Park. Sadly we didn’t have time for the latter as we’d planned to spend most of our penultimate day exploring the nearby cave monastery of Vardzia.

And we thought Davit Gareja was big! At its peak, Vardzia had over 400 rooms, 13 churches, 25 wine cellars, a bakery and a forge all spread over 19 levels. That said, it’s a quarter of the size of Old Khndzoresk in southern Armenia

Although excavations show the area has been inhabited since the Bronze Age, with cave settlements starting around the 5th century BC, the remains at Vardzia date back to the reign of King Giorgi III in the 12th century and continued in phases for the next 100 years or so. They’re still excavating and adding caves to the site as they’re being restored. 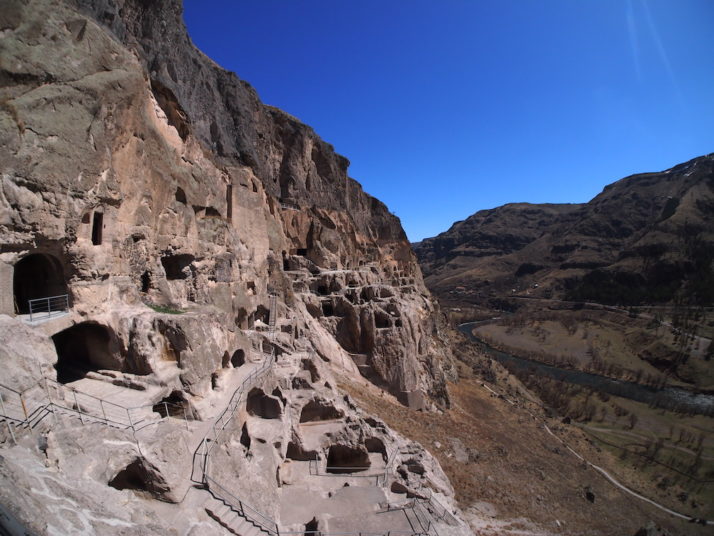 Look at all of those caves.. it’s immense!

We’d read the guides rarely speak English so we opted for the cheap audioguide (quick tip – they provide a set of headphones but bring extra ones and a splitter to share – you’ll hear it better too, and don’t forget some ID to leave as a deposit) which was great for the history and context but we felt went into a little too much detail about some of the rooms and frescoes. 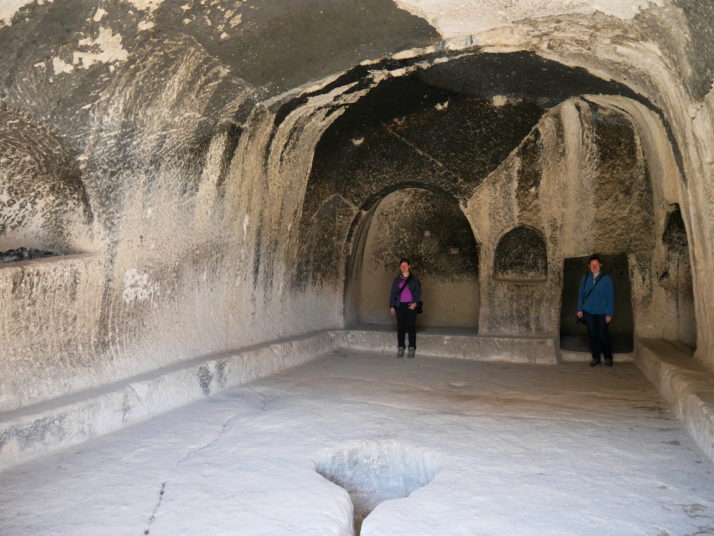 Jo and Julie in the wine press, some of the caves are huge inside 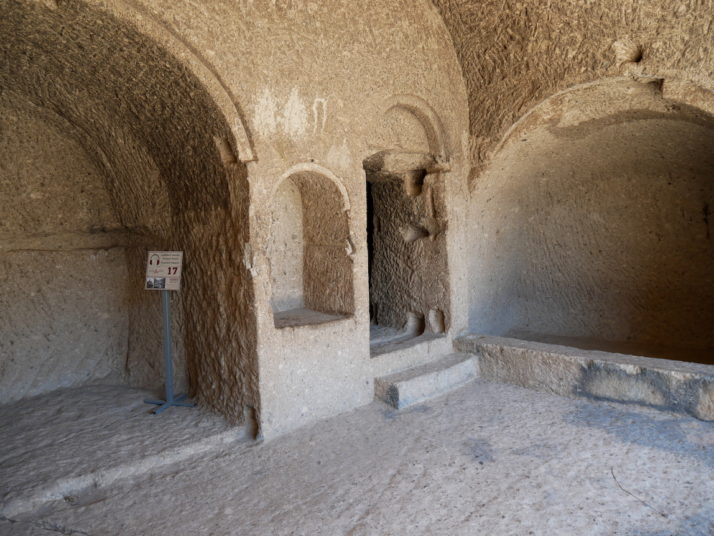 While others are intricate, like this one which was Queen Tamar’s, daughter of King Giorgi III and continuer of the Vardzia Monastery. Most of the cave cells are simpler than this one but had a similar layout

The cave complex is centred around the very impressive Church of the Assumption which is set back into the cliff face, saving it from the earthquake of 1283 that destroyed the outer tunnel network and exposed a lot of the caves to the open air. I say it’s impressive but we weren’t able to see inside for ourselves despite hovering around another couple who were with a guide who had a set of keys on him. I suspect that it was being renovated ahead of the main tourist season as we could see a lot of scaffolding inside through the cracks in the doors, so we made do with the overly detailed audioguide, recollections of our research, and photographing the frescoes on the outside! 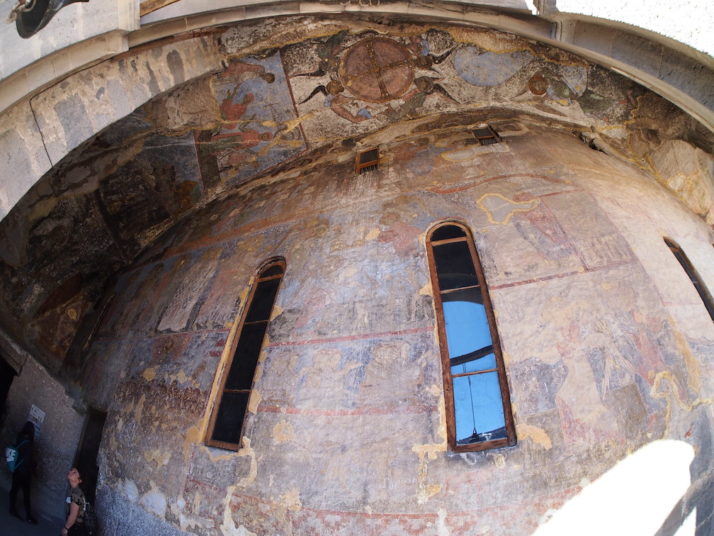 The wonderful frescoes on the outside of the Church of the Assumption. The audioguide added history and context to our visit, but sometimes it was difficult to hear and we started skipping some of the more laboured descriptions

Had it not been locked, the Church of Assumption would likely have been the highlight of an altogether astounding visit, pipping it to first prize therefore goes to The Refuge, a secret chamber accessed through a narrow, dark 150m tunnel complete with defences that winds its way from chambers behind the church up through the rock. 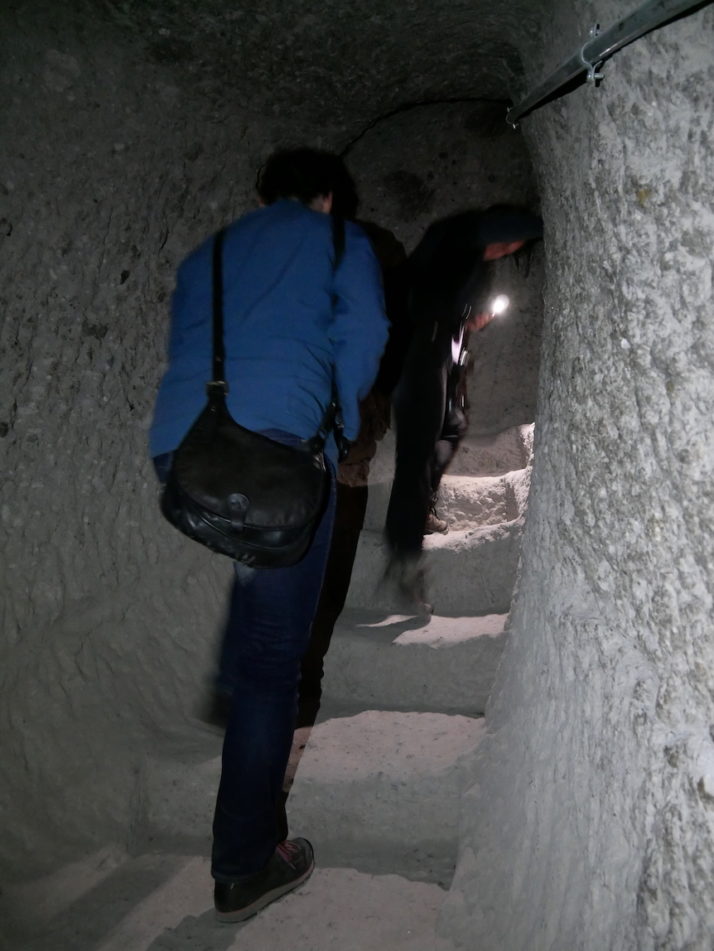 Exploring the escape tunnel to The Refuge with torches was exciting and a little bit scary as we were on our own. The tunnel has two heavy rock doors that could be closed behind those fleeing, and a battlement style murder hole 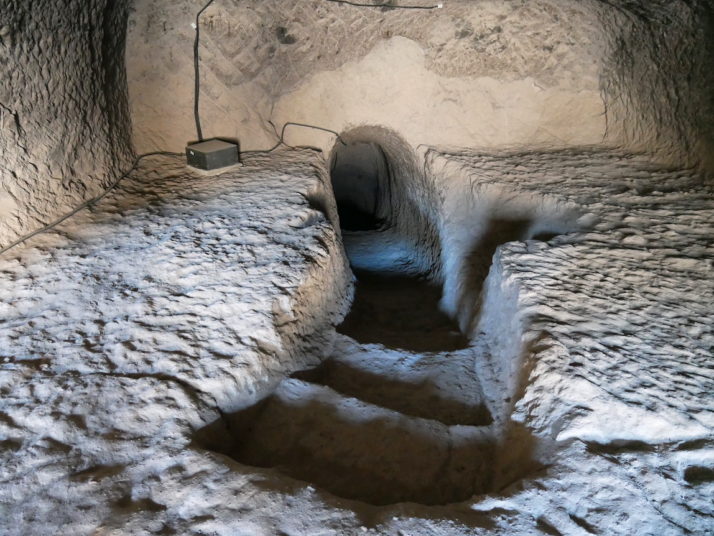 The Refuge! This is the exit from the tunnel and the room itself has a couple of tall, narrow windows for firing arrows and catapults through in defence

We really enjoyed our time exploring the multiple levels and variety of caves. Taking our time and taking lots of photos we found it was just the right length. Before heading back to Borjomi we picked one of the on-site restaurants for a bite to eat and were pleasantly surprised at the quality and the price compared to similar captive audience establishments back home. We’d had a similar experience at the Prometheus Cave just outside Kutaisi too.

Even stopping for 10 minutes at the Khertvisi Fortress for a quick photo opportunity and to stretch our legs on the way back to Borjomi, we had time to dust off our clothes from scrambling around the caves and tunnels and head to the Mineral Water Park for one last hike in this beautiful country. 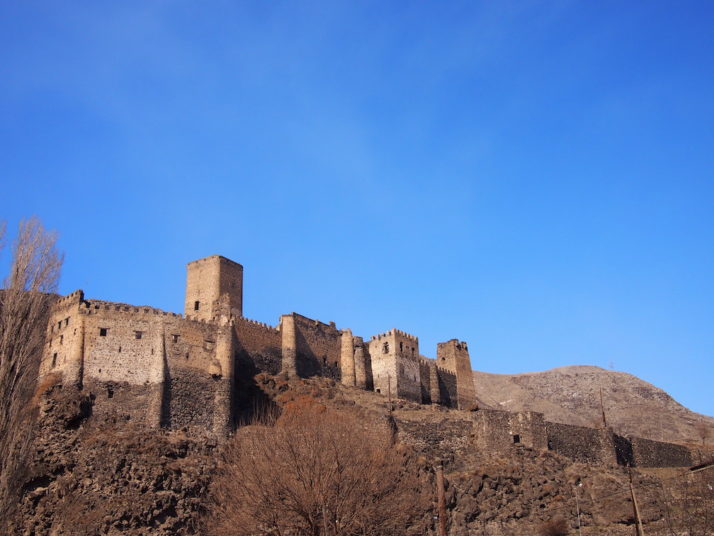 Borjomi’s central Mineral Water Park is on the site of the first spring (which is named Ekaterina), and contains the original bottling plant which looks like it was gearing up to be a museum. We filled our bottles and weren’t too put off by the sulphuric smell, or the fizzy, salty taste. Refuelled for our hike we took yet another cable car to the top of the park and followed the 3km forest trail back down. 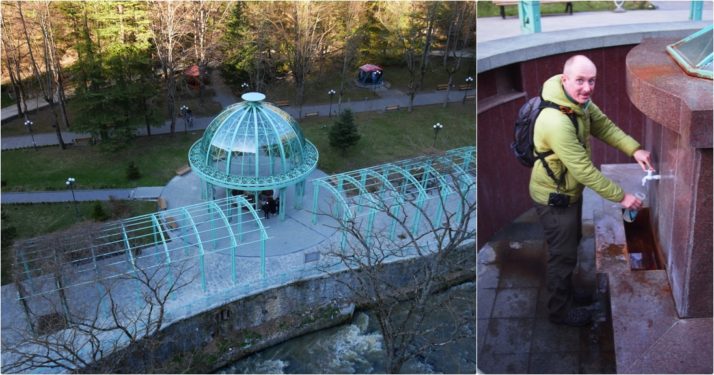 Filling up with Borjomi’s biggest export – there are some 40 bottling factories in the area and the waters are exported throughout Georgia. Truth be told, we drank about half a bottle between us as the taste was pretty strong! 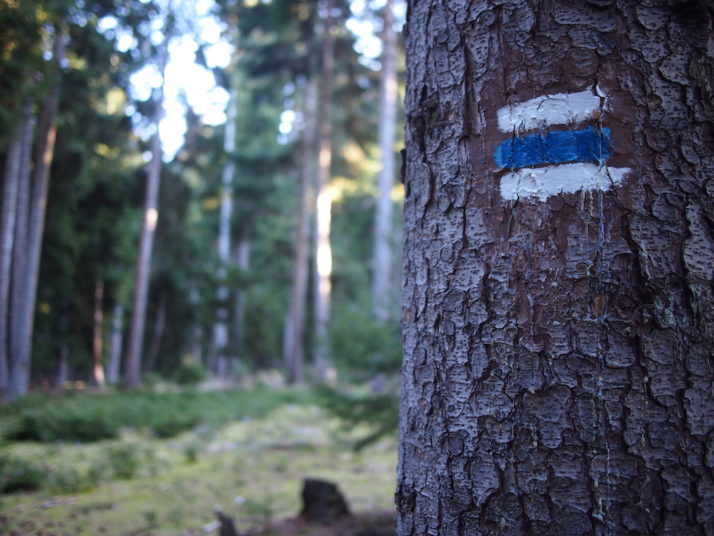 Though the trail was marked, spotting the markers was tricky at times as new barbed wire fences had gone up right across the path! 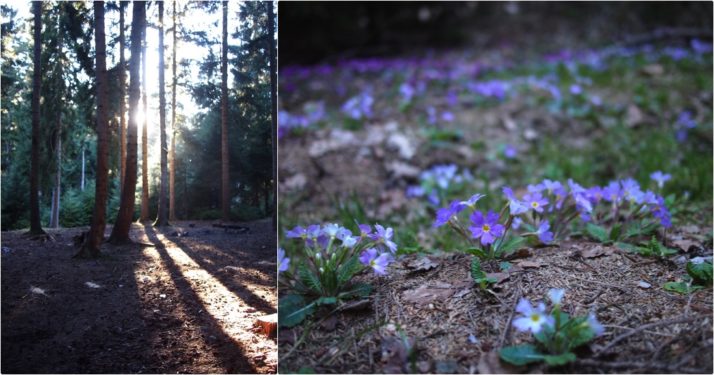 Still, we were treated to a fantastic tranquil sunset through the trees 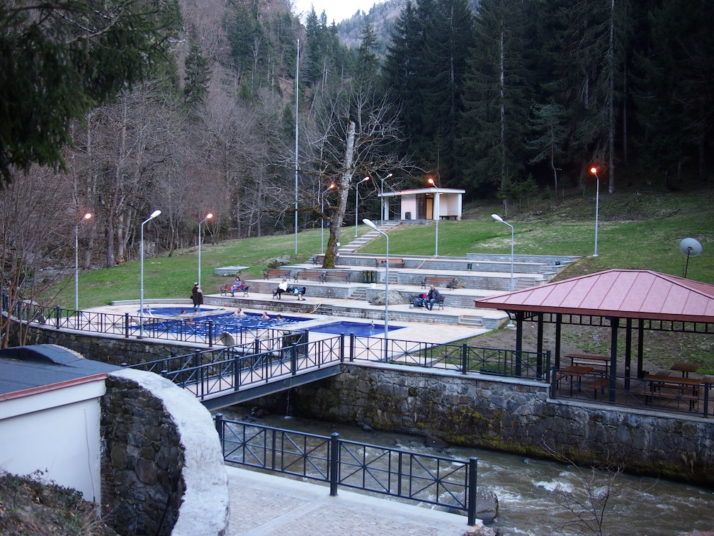 Near the end of the trail are public open-air mineral water swimming pools, time for a dip..

The water wasn’t as warm as we’d hoped, and the changing room block was closed so we did the wrap-around towel thing but it was a perfect end to an amazing day and a relaxing end to our time in Georgia.