Wuhan has been a major port on the Yangtze River for over 3000 years and has the layers of history which that suggests, from excavations of ancient tombs right through to the site of the 1911 Wuchang Uprising which sparked the nationwide Xinhai Revolution resulting in the overthrow of the Qing Dynasty and the formation of the Republic of China. View over central Wuhan and the Yangtze River

We only spent a couple of days in the city, and we were pretty worn out from walking for miles around the sights of Nanjing so one of those days was spent recuperating and making the most of a stable and moderately fast internet connection to catch up with some blogging and photo backups. On our second day though we ventured out to see what the city had to offer. 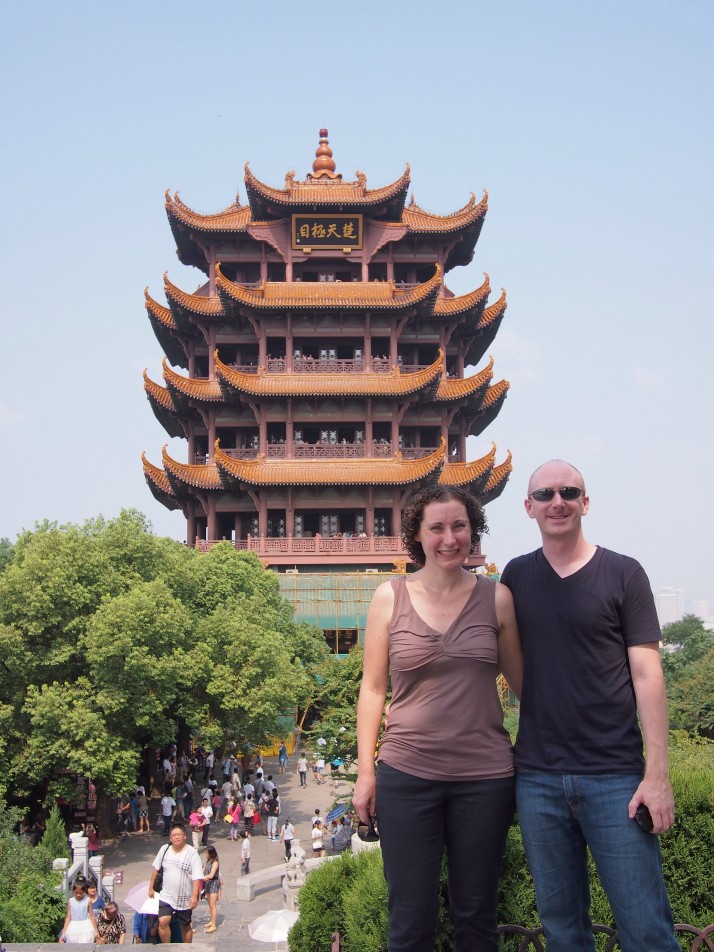 Us with the Yellow Crane Tower

Our first stop was the Yellow Crane Tower, probably the most famous landmark in Wuhan. There has been a Yellow Crane Tower in Wuhan since 223AD although the current structure dates only from 1981. There is an exhibit on each of the five floors of the tower, one of which had models of five of the historic towers. 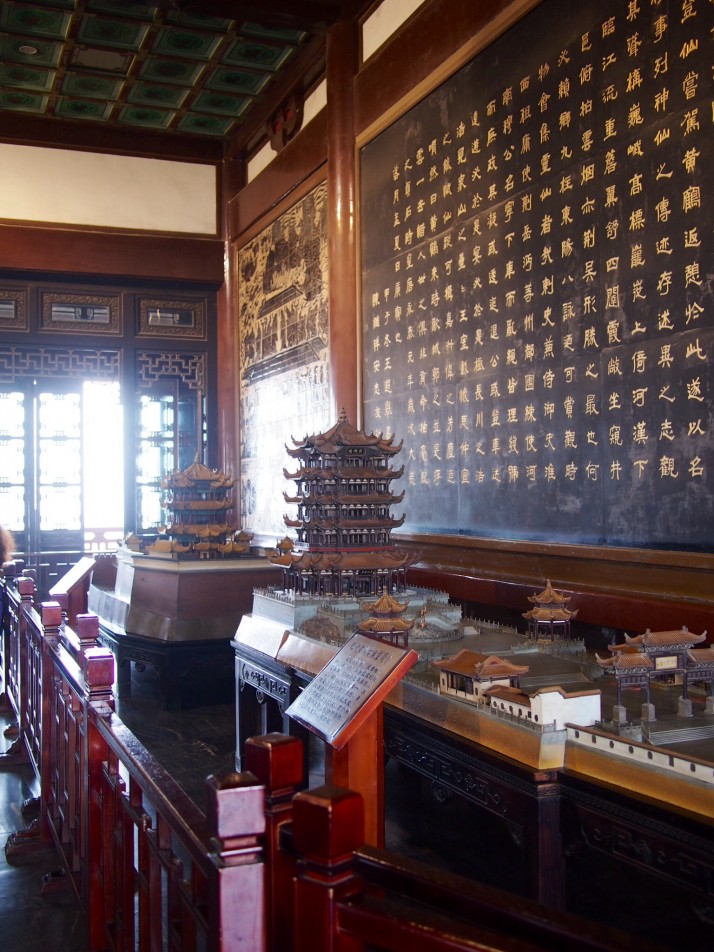 Models of some of the tower’s incarnations

As we climbed, we found ourselves taking photos of the same view in each direction at progressively higher heights and enjoyed getting a closer look at the bright mustard yellow tiles. We could see construction work in the distance (a common sight in China), grass growing on apartment block rooftops below and several bridges spanning the huge Yangtze River. 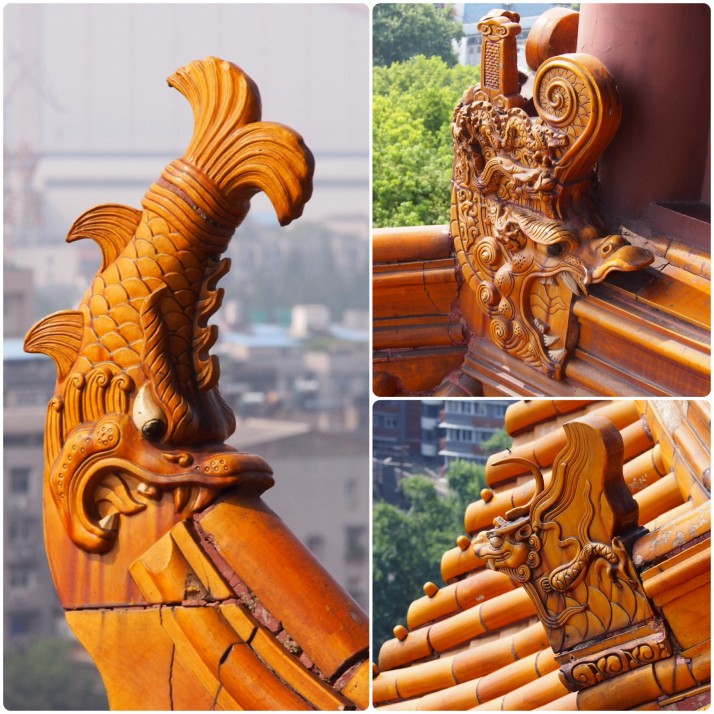 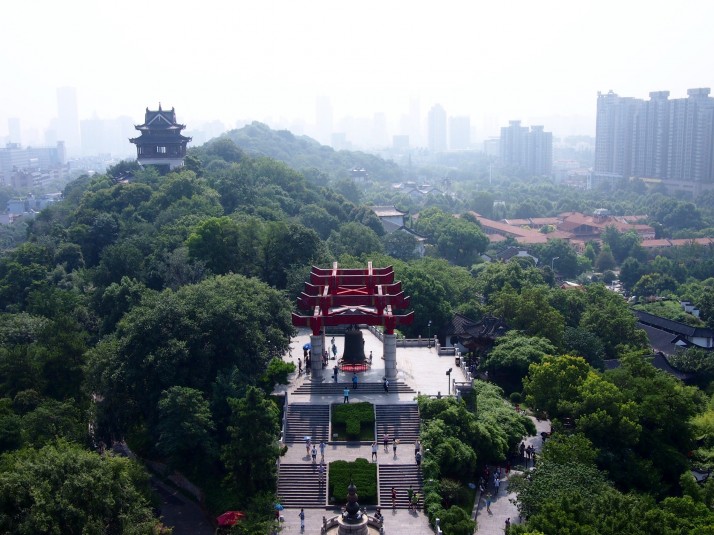 View over Snake Hill Park including the bell pavilion, from the top floor of Yellow Crane Tower

After descending the stairs we wandered through the rest of the park, there is a huge ‘lucky’ bell which for a charge you could toll, a statue of Yue Fei who was a 12th century local military hero and a lovely garden with lawns which to me looked almost English until Andrew pointed out the numerous bonsai trees… 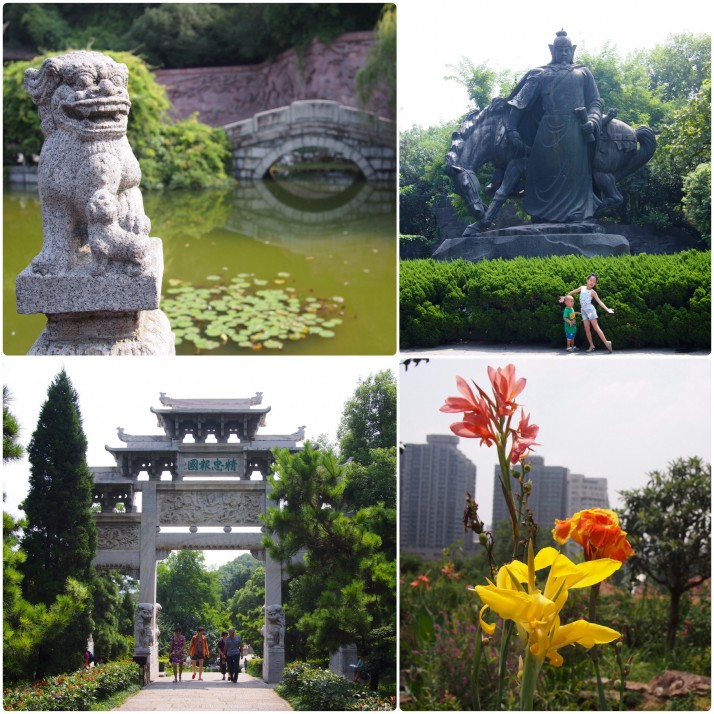 City buses in China generally have no English signage though they are frequently the best way of getting from one sight to another. Fortunately we’d done some research on bus numbers and written down our stop names in Chinese so were able to navigate the system to our next destination, the Hubei Provincial Museum. 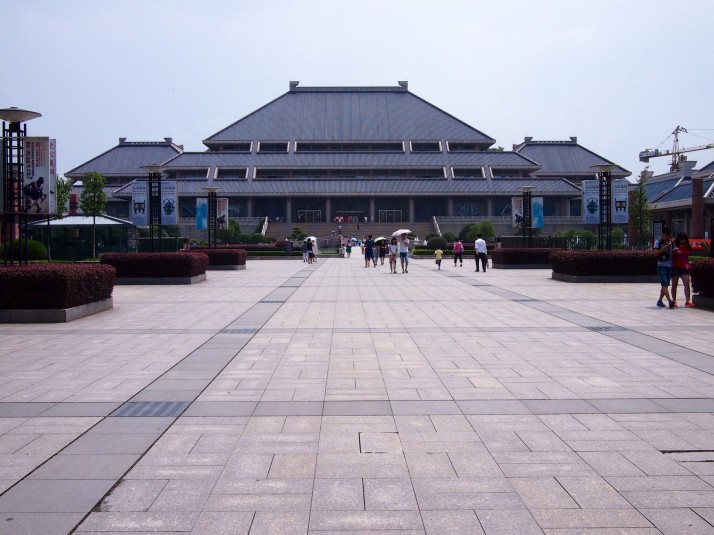 This huge and very modern museum displays mostly archaeological exhibits especially from this region of southern China. The highlight, and where we focussed our attention, was the exhibit on the Tomb of Marquis Yi of Zeng which was excavated in 1978. It is the tomb of a feudal king buried 2400 years ago and incredibly, academics were able to date it by calculating when the observation of a chart of constellations decorating the lid of a trunk was made! 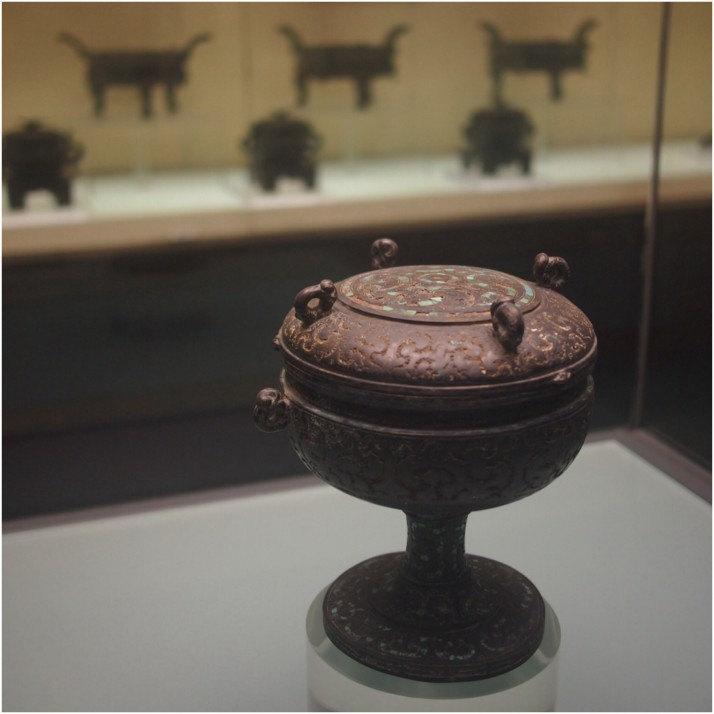 Inside the tomb were lots of intricately decorated food vessels, including this bronze lidded dou which would have been used to hold seasonings

Particularly noteworthy are the musical instruments, 125 pieces in total including drums, stringed instruments, panpipes and stone chimes as well as the centrepiece, the heaviest musical instrument in the world, a set of 64 bells weighing in at a massive 5000kg. According to the explanatory notice

Each bell is able to produce two tones. The whole set covers a range of five and a half octaves with twelve pitches and change of keys.

which sounds pretty impressive to me with my limited musical knowledge… 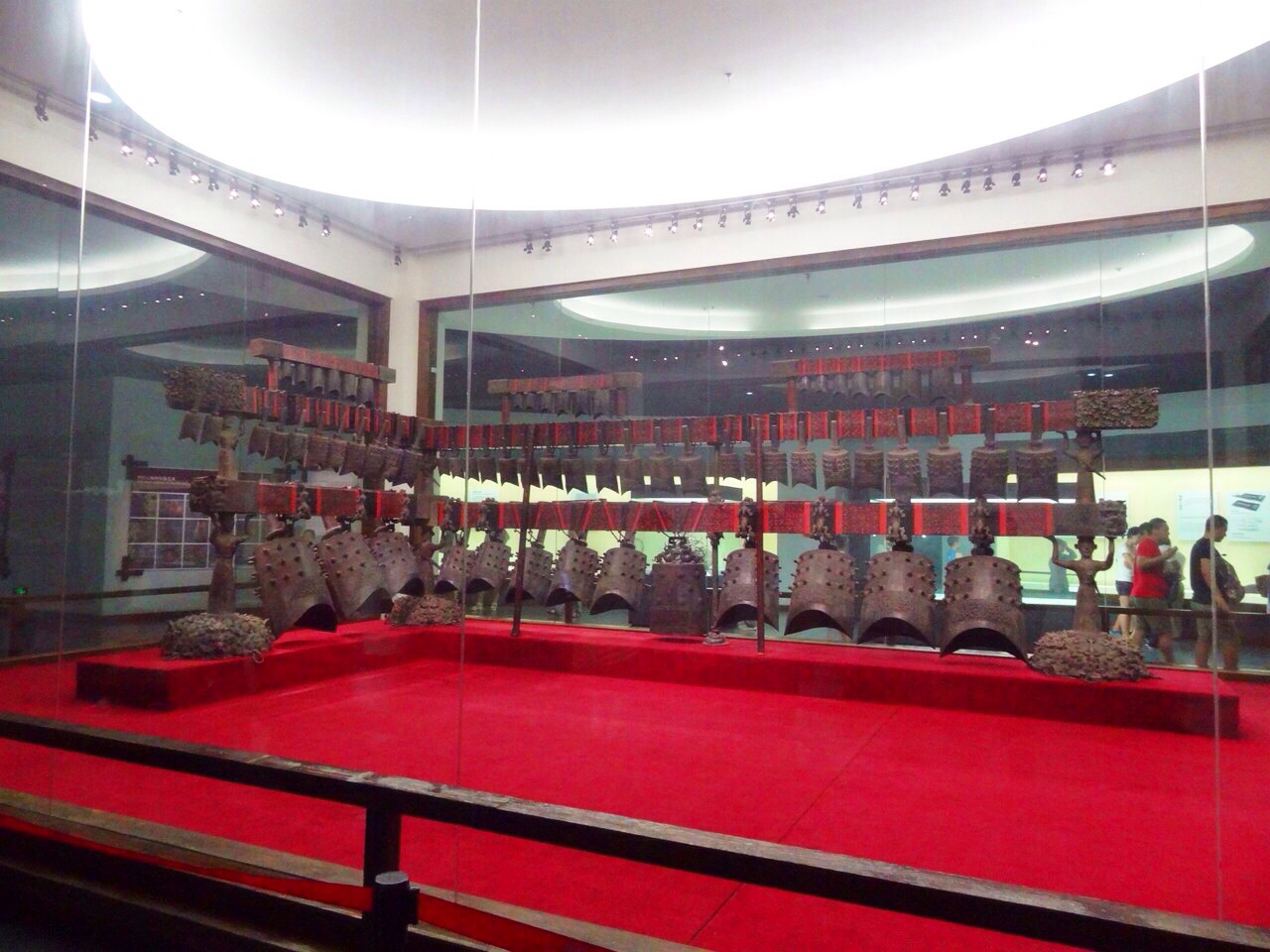 The highlight of the afternoon was attending one of the 20 minute performances of replicas of the instruments in the small on-site concert hall. Very professionally done and thoroughly enjoyable we wished it had been longer. 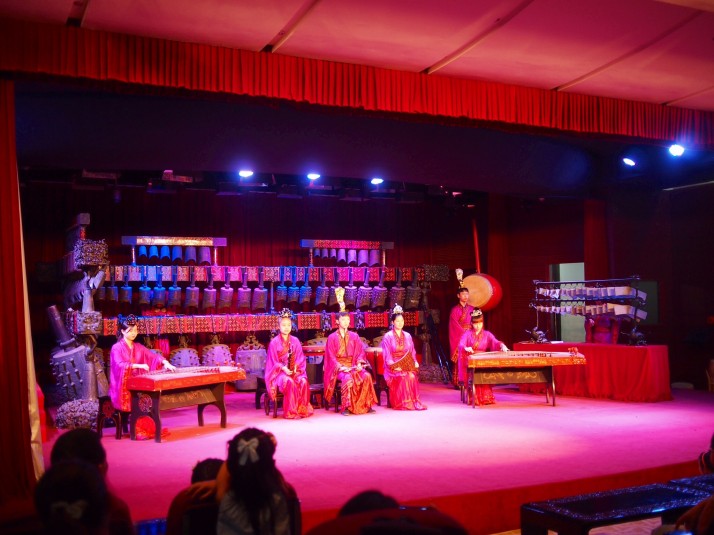 One of the pieces that we are sure we recognise but thus far have been unable to dredge the name of from our memories is this – if anyone can put us out of our misery we’d be very grateful!

[update: with many thanks to Clare who emailed to let us know that it’s Beethoven’s Ode to Joy]

One thought on “Wuhan, China”