Having enjoyed our time in the second largest Sicilian city of Catania, we were equally looking forward to Palermo which is the largest. Anticipating that it would be a larger version of the same, we weren’t at all disappointed, there’s more to do and more to see. Also like Catania we found ourselves a nice little apartment with a kitchen so we could make full use of the Sicilian markets when were weren’t out trying the local street food. 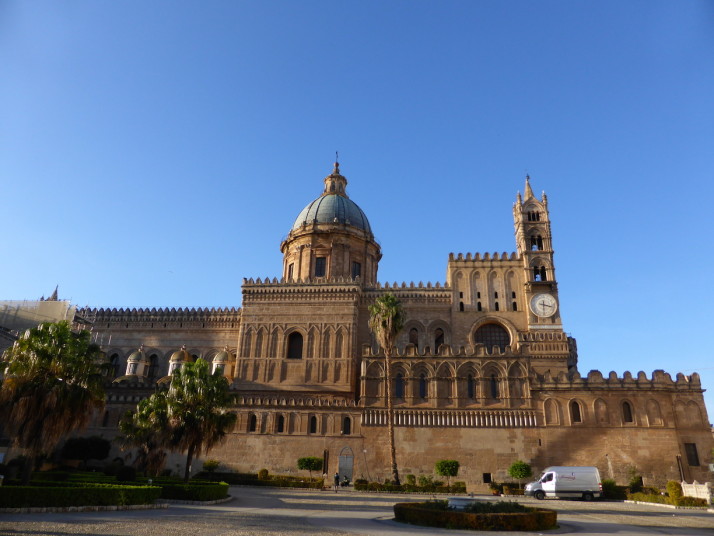 Built in 1185 on the site of a former Byzantine church, Palermo’s cathedral, like the Monreale Cathedral that closely preceeded it, is a hodgepodge of the styles and influences of multicultural Sicily: Norman, Arab, Gothic, Baroque, and Neoclassical. Inside the huge Palermo Cathedral. Quite restrained in its decoration given its proximity to Cefalù and Monreale

A nice surprise was the international nativity scene made up of models from around the world! The Sacristy of the Canons was given over to an international collection of nativity scenes. We tried to spot as many as we could from countries we’ve been to! We especially liked the Panda bears of China and although we haven’t been to the North Pole, we liked the Polar Bear but wondered why there was a giant penguin there.. (they’re native to the South Pole)

We were staying not far from the cathedral, and even though we passed nearly every day, we couldn’t help taking photos of the outside apse end! Outside of the nave at the rear of the cathedral was our favourite part, we just couldn’t help taking photos of it every time we passed! 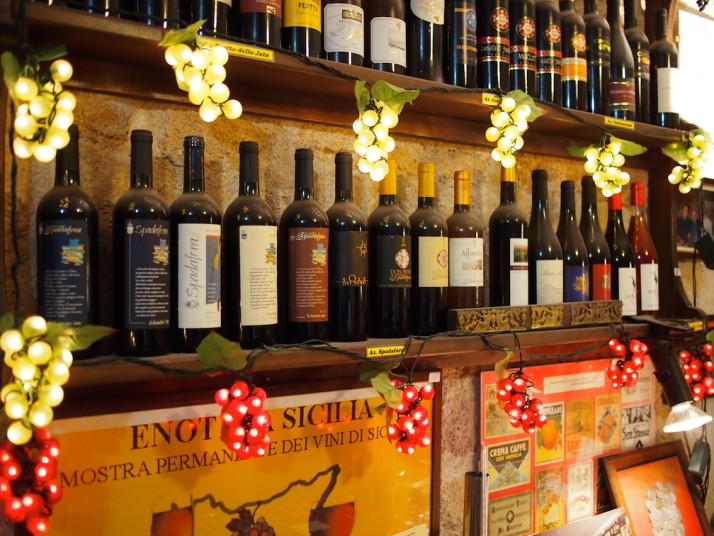 The private wine museum in Palermo

On our first night in Palermo we found our local enoteca or wine shop, run by a young guy who, while filling up a two litre water bottle with Nero d’Avolo for us gave us a ¾ plastic cup to taste, then the same of the house white, followed by a small taster of the house moscato! As we’d enjoyed them all we decided it’d be a good idea to find out more about how Sicilian wine is made so we booked a tasting at the Enoteca Sicilia. Guido Ferla explained that every year 10% of this barrel has been taken out and replaced with 10% new wine since 1928. It smells fantastic!

This very impressive collection of all things wine related appears to be very much a personal labour of love. The underground Aladdin’s caves are packed with memorabilia, tools, bottles, labels, maps and has a small bar where we received a small glass of wine. The President of the museum, Mr Guido Ferla met us and explained, in English, that he didn’t speak English, which is fine with us and so we thought we’d spend the next hour or so wandering through the museum on our own. However, he then proceeded to show us around pointing out some of the more interesting artefacts with a little English explanation! It was as good as some of the tours we’ve had that are advertised as being in English! Anything and everything related to wine and wine making, the museum is a treasure-trove

We came away with a much more rounded appreciation of Sicilian wine making and its history, and a book of wine-related quotations and thoughts put together and signed by the President himself! Dating back to 1143, construction of this little church was started after the Cefalù Cathedral, but before the Monreale Cathedral and the major work on the Palermo Cathedral. And, like those, it was on our must-see list because of its amazing ceiling.. Wow! What a ceiling! The apse is decorated in beautiful golden mosaics like the cathedrals of Palermo, Cefalù, and Monreale, but the nave is covered in delightfully delicate pastel murals

The smaller size of Martorana made it easier to take in a lot more of the decoration compared to, say, Monreale. Close up of the ceiling of the Martorana, murals in the foreground and golden mosaics in the background Exhibition hall at Palazzo Riso. The satellite dishes in the foreground are sitting on speakers playing a recording of the Syrian riots, with a pile a couscous on them. I’m in the background watching the video of a wall being shot by the artist

Feeling a little church and cathedral’d out, we took a change of pace and picked Palazzo Riso, the most central of the modern art museums in Palermo. We’re not sure if the building restoration works have impacted the displays, as the galleries seem confined to one wing and spill out into the staircase, but regardless we felt a little underwhelmed or un-inspired by the works on display. However, there were 2 standout pieces; firstly, a section of wall of photo frames peppered with bullet holes. In the centre was a small screen that showed a video of the ‘creation’ where the artist quickly circled the faces before opening up with a handgun taking out almost all of the portraits with admirable marksmanship. Our favourite piece in Palazzo Riso – wardrobes hanging from the ceiling. Sadly, we don’t know who it’s by

But our favourite was undoubtedly the massive upstairs room full of wardrobes hung from the ceiling. We don’t know why it was done or what it means, but we like it! 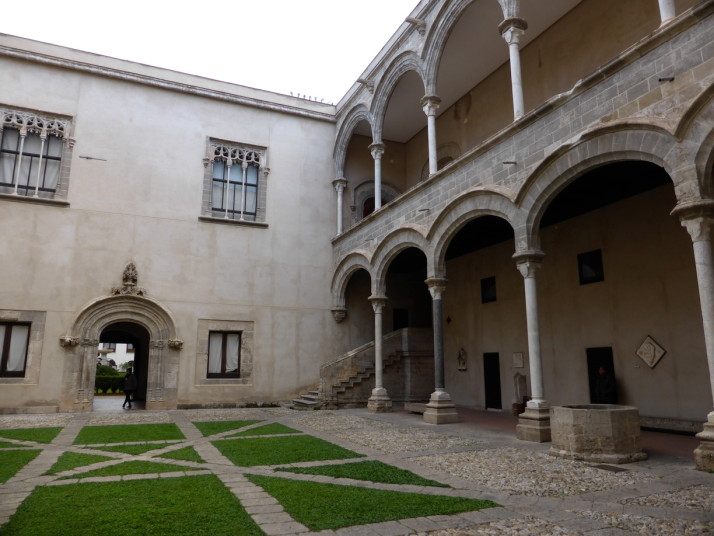 The peaceful courtyard of the Palazzo Abatellis, home of the Regional Gallery of Sicily

The Regional Gallery of Sicily, more commonly known as Palazzo Abatellis was a highlight for us because of the great use of space. Formerly the residence of Francesco Abatellis, the port master of the Kingdom of Sicily and built in the 15th century, the building was given over to be used as a monastery after the death of the last family member. Following restoration after being bombed in 1943, it reopened as a gallery of medieval art. 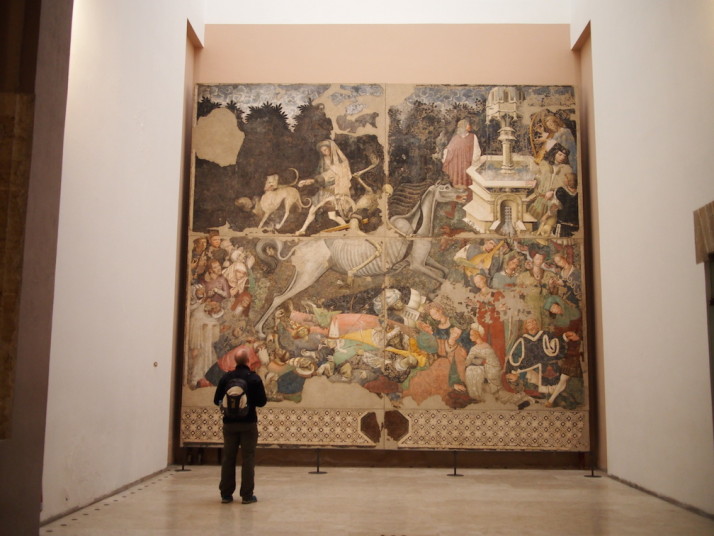 Trionfo della Morte, or The Triumph of Death, a huge fresco painted around 1446 depicts Death launching arrows at all levels of society

As well as the good use of space, there were 3 pieces that stood out for us in the museum, firstly the Trionfo della Morte, The Triumph of Death, which depicts an indiscriminate Death taking lives regardless of social status. We understood it was commissioned for the entranceway of a hospital!

The second was the room displaying the giant cathedral crosses that are decorated on both sides. As they’re usually hung high in the nave, it was nice to be able to see examples of them up close. 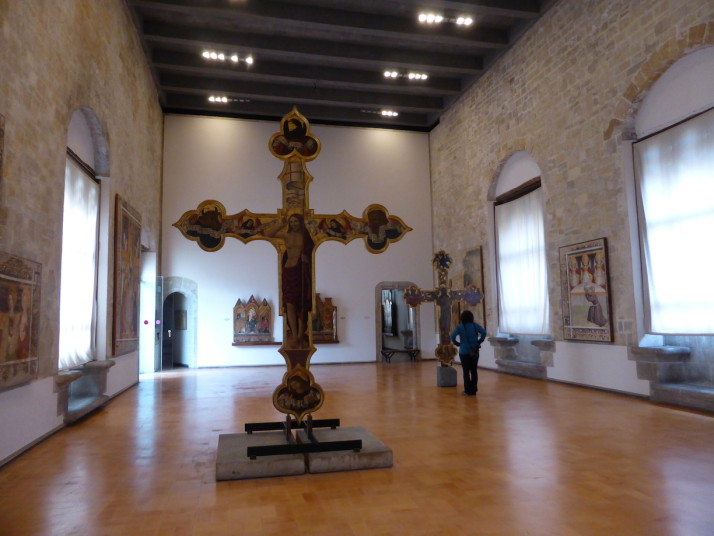 Croce Dipinta, or painted cross. Typically one side shows the crucifixion and the other the Resurrection

The final piece is the Annunciata, or Virgin Annunciate by Antonella da Messina, a vivid painting of Mary interrupted by the Angel of the Annunciation. It reminded us of the Mona Lisa as it’s a lot smaller in real life than we were expecting. “Annunciata” by Antonella da Messina, one of our favourite pieces in the Regional Gallery of Sicily

Just outside the Palazzo Abetallis I spotted a graffiti version of it.. A clever graffiti version of the Annunciata, just outside the Regional Gallery of Sicily where you can see the real thing! 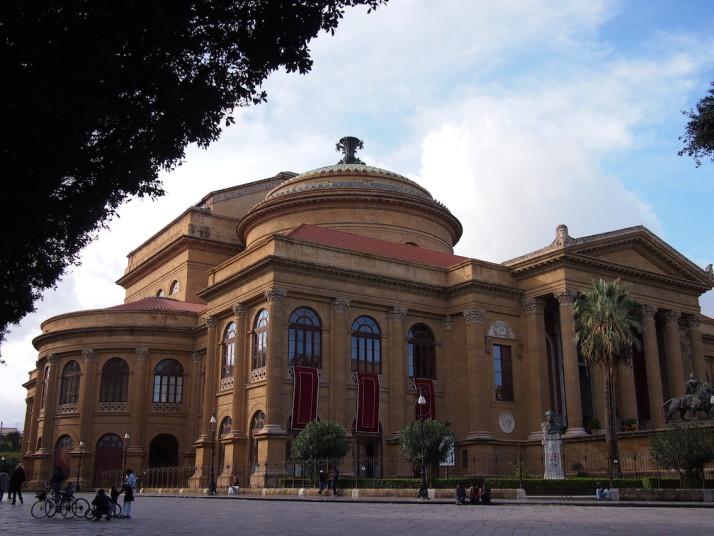 The Teatro Massimo in Palermo, the name literally means Maximum Theatre, but translates as Playhouse

We didn’t see a performance at the Teatro Massimo, but it makes it into our highlights list because it’s the filming location of the climactic final scenes of the Godfather part III. Palermo also has a pretty big Botanical Garden, and as we’re big fans of parks and gardens we spent an hour or so wandering through the varieties and exhibits on show. Obviously it’s not at its best in the winter months, but nevertheless it was a pleasant escape from the hum of the city scooters, and we especially liked their water-species pool which was full of lilies and home to lots of terrapins too! 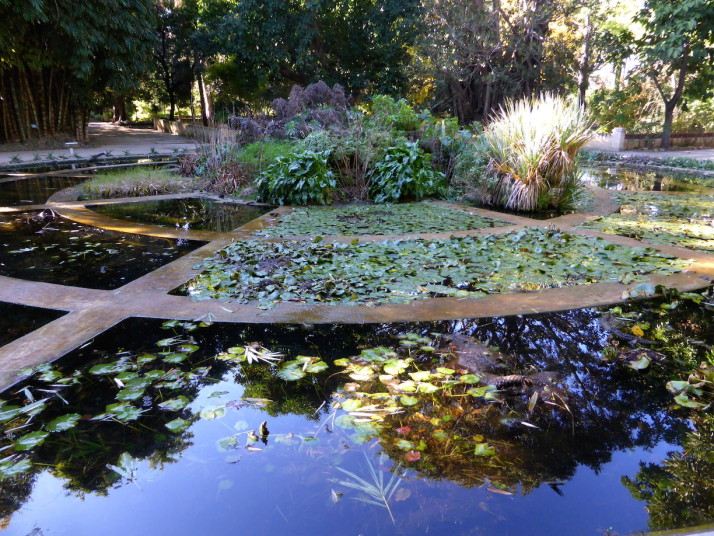 We liked the clever outdoor aquarium with its separate concentric circles .. which was also home to sunbathing terrapins!

We were surprised by how eclectic the collection was – we saw plants and trees from as far away as Ethiopia and the Canary Islands, including a species of tree that has leaves and spikes that grow up the trunk – something we’ve never seen before! 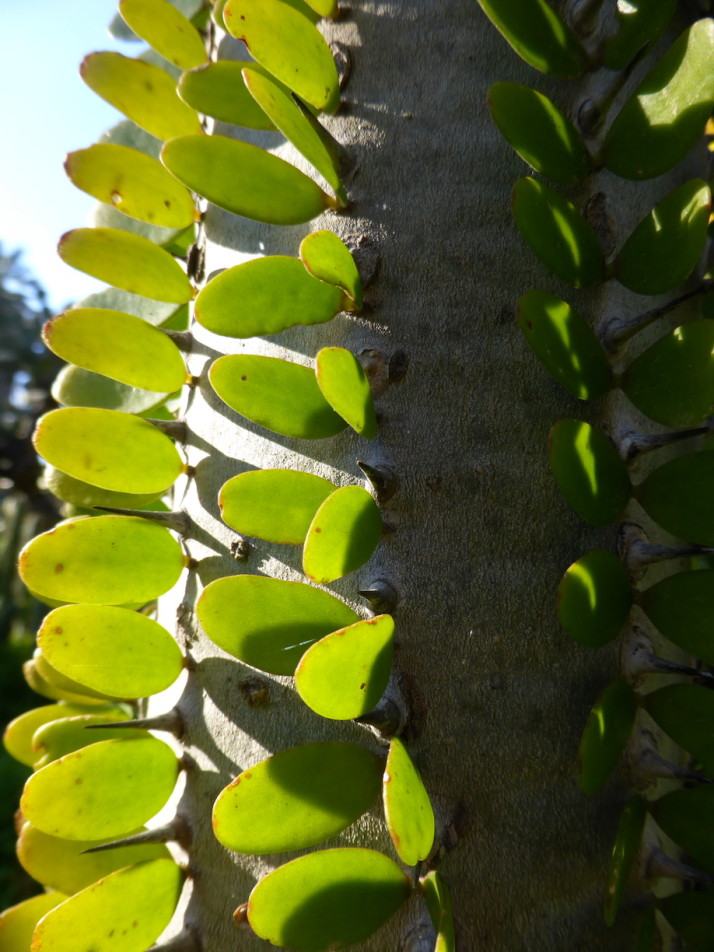 The very strange Alluaudia procera from Madagascar, is a tree without branches, instead the foliage grows up the trunk protected by spikes! Not strictly a museum, this is actually a private collection of Neapolitan and Sicilian floor tiles from the 16th century onwards displayed in the owner’s apartment. Like the Enoteca Sicilia, viewing is by appointment only so the owner can disappear upstairs to his office while one of his very knowledgeable guides walks you through the history of floor tile design and manufacture. I know, on the face of it, it sounds as dull as watching clay dry, but as soon as we stepped through the door into the hallway we saw why this is the highest rated attraction on TripAdvisor for Palermo. Every room is floor to ceiling mounted floor tiles, complemented with modern and antique art. We walked through each room 4 or 5 times and saw something new every time Some floors were commissioned by very rich nobles such as this one, which shows off another of the owner’s properties. We were told it’s extremely rare to find and then to successfully recover complete sets like this

The collection is loosely organised by age, and the owner swaps them around occasionally. The guides try to catch him out by swapping the odd tile around too, but we’re told the owner always spots them! Most of the collection consists of single tiles, which creates a beautiful background

2 thoughts on “Highlights of Palermo, Sicily”