Having visited Yo! Sushi in the UK and seen pictures of conveyor belt sushi restaurants in Japan, we were curious about how the two would compare, so when the lovely Rio at our hostel in Kobe recommended a branch of the Kura Sushi chain we decided to take a break from the beef and give it a go.

On arrival we were given a small board with a diagram of the restaurant and arrows showing us how to get to the table. OK, they don’t even show you to your table, this is definitely going to involve less human contact than we are used to in restaurants… Our table was a small booth with the conveyor belt moving along beside it. 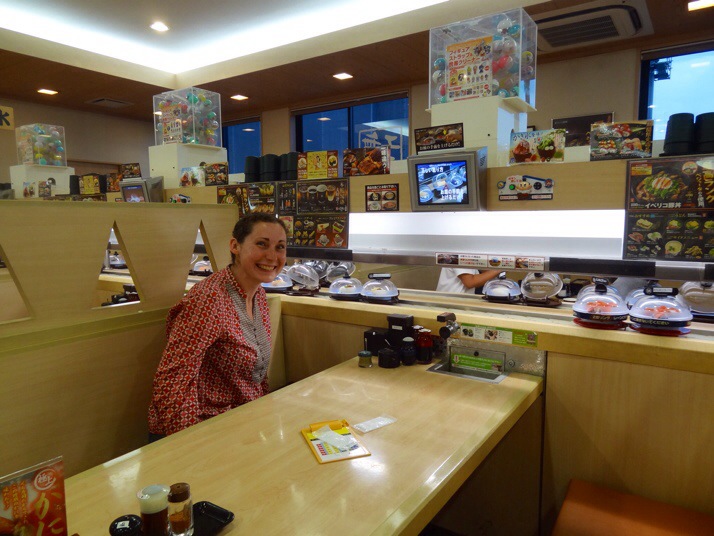 Can you tell how excited I am?!

We soon spotted the screen above the conveyor. Aha we thought, we know what’s going on here, we’d heard that you can order extra items using the touch screen so we settled into our seats secure in the knowledge of what we were doing… That all changed pretty quickly when we spotted a plate that we fancied moving past. We tried to lift it off, but we couldn’t detach it from the little train of two or three plates all with plastic domed lids. We looked around to see if we could take a cue from a nearby table. Nope, everyone was either eating or ordering from the screen. OK, we’ll try that then, why don’t we order a beer? So we scrolled through the menus until we found the drinks. Hit the picture of a glass of beer and sat back to wait. After about 5 minutes and another attempt, nothing had appeared so we collared a passing woman who was wiping down tables. “Biiru?” we enquired (yes, that really is the Japanese word). She motioned to the back of the restaurant and when Andrew went to investigate this is what he found: 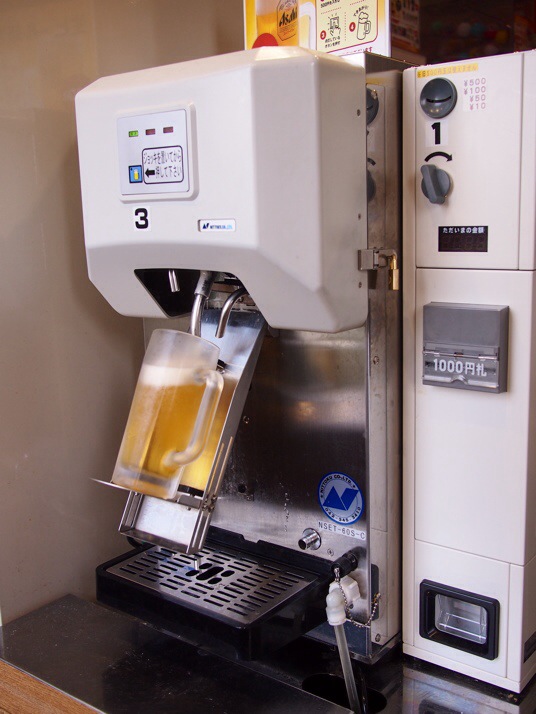 A draught beer vending machine!. Insert a ¥500 coin, take a cold glass from the fridge, place it on the stand and press start. The machine tilts the glass, pours the beer with a perfect head and away you go!

In the meantime we’d figured out how to get plates off the conveyor, you just need to grip the edge and lift slightly to trigger the release for the lid. We’d got through a few dishes that way, it’s pretty compulsive choosing things from a constant parade, but we still wanted to order from the menu screen and have something delivered, this is how it works…

By this point we were accumulating quite a stack of plates, but we could see that the nearby tables were empty apart from plates with food on. What were they doing with their empties? We’d already noticed a kind of plate shaped post box at the side of the booth, maybe we put them in there? In Yo Sushi! the plates are different colours which signifies different prices but here they’re all the same ¥100 (about £0.60) or some dishes are double and come on two plates held together with a clamp so it made sense. 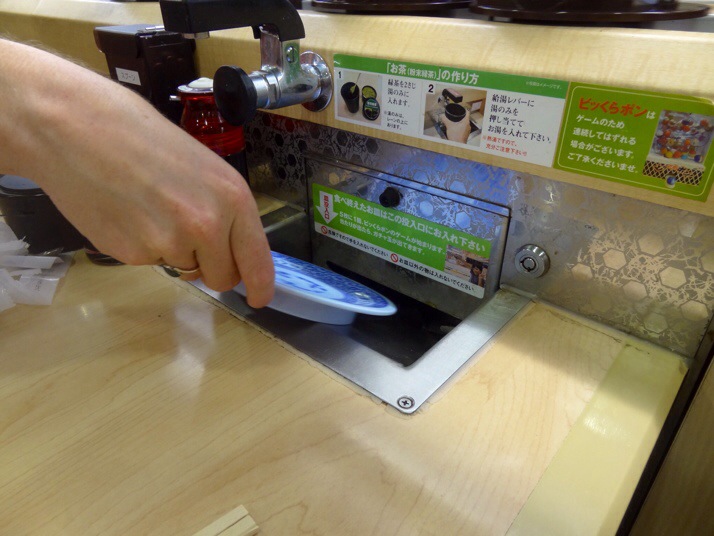 Disposing of dirty plates – I bet you wish you had a slot like this at home!

As we fed the plates into the slot we noticed a counter in the corner of our display incrementing. When it got to 5, there was a loud trumpeting sound from the screen and it started to play a little cartoon of a contest. We had no idea what was going on but it must have been a success because the hitherto unnoticed vending machine above the screen clanked into action and delivered us a prize in a plastic ball! It was a rubbishy plastic mobile phone charm, but still, we wanted another… The cartoon was activated on multiples of 5, but despite feeding in 10 and then 15 plates we didn’t see the winning version again. 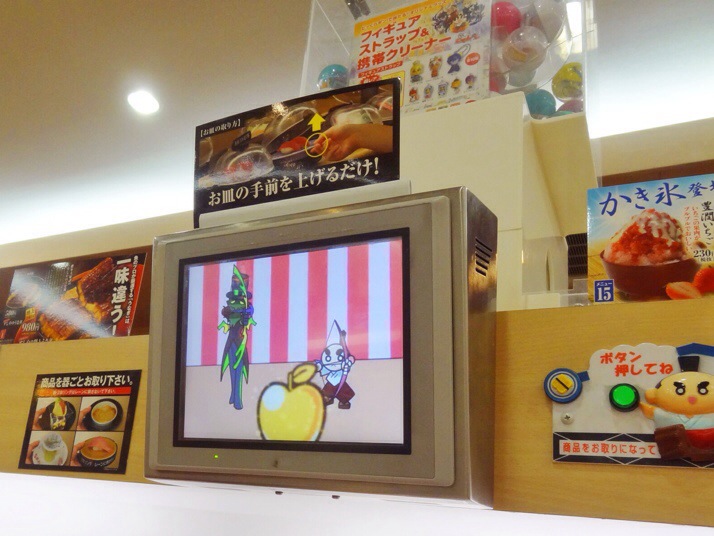 Cartoon ‘contest’, you can just see the prize balls in the dispenser above the screen 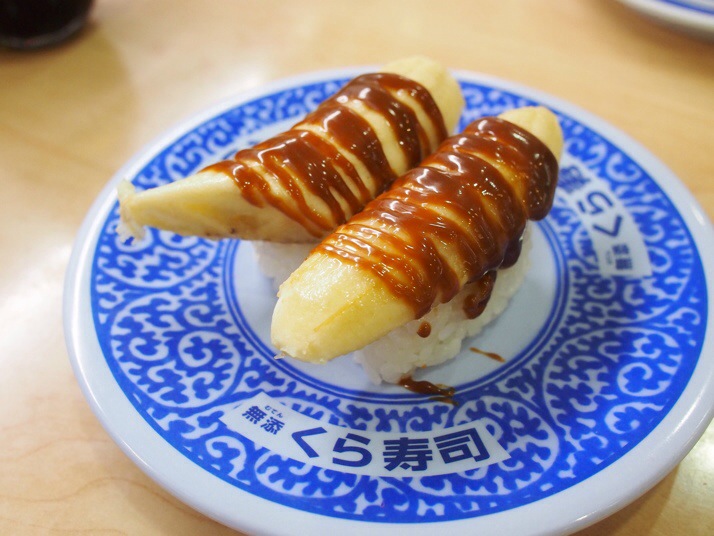 And if you’re wondering what we had for dessert, here it is – banana toffee sushi :-)

We figured that the bill probably wouldn’t be brought to the table and that, with our little table number board that we received at the start, the cashier would just be able to pull up what we owed from how many plates we’d posted. But we missed out a step, at the till we handed over our table number which generated a little flurry of activity as the cashier called across to one of the cleaning ladies who bustled off in the direction of our table. I think we were supposed to press a button to let them know that we’d finished so that someone could check that the table was clear and all plates counted. We apologised for holding up the payment and in typical Japanese fashion, he brushed aside our apology and apologised to us that everything was only in Japanese – not many places in the UK would apologise for having inadequate translation into foreign languages. 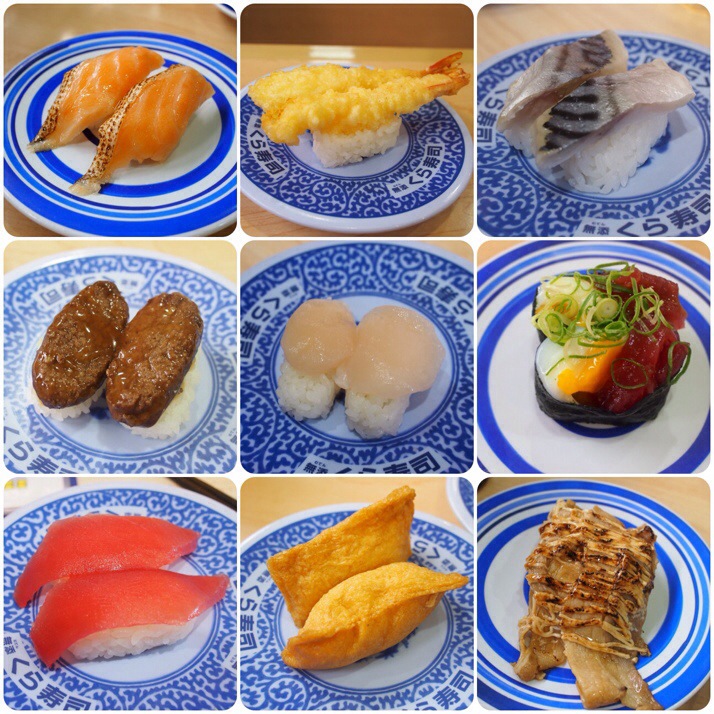 It was fun to see how mechanised the restaurant experience could be and at an incredibly low price too – we greedily ate until we were almost ready to burst but still spent less than £5 each (not including drinks). We enjoyed the experience so much that we sought out another branch of the restaurant in Tokyo, it was just as yummy but not quite the same without the adrenaline rush of trying to figure out how everything worked!

9 thoughts on “Eating at a conveyor belt sushi restaurant”