We’ve eaten more fish since we got to Japan than we ate in the whole of the preceding year but, as we’ve discovered, there’s a lot more to Japanese cuisine than sushi.

Although food is not cheap in Japan it is possible to eat out reasonably inexpensively (under £6) in noodle restaurants, or similar fast-food type places, and many restaurants offer inexpensive lunch set meals. Izakayas are like the Japanese equivalent of British pubs and they are among our favourite places to have a drink and a meal. In them, food is served in smallish portions for sharing, like Spanish tapas, and there’s always a drunk salaryman sitting down the counter ready to engage you in conversation despite having no shared language! We’ve found food quality to be excellent everywhere.

When you think about Japanese cuisine you’ll almost certainly think of sushi. We’ve had it from conveyor belt restaurants and boxed from the supermarket but without a doubt it’s best when served freshly made. There’s usually a small slick of wasabi between the fish and the rice, just enough to give it a kick but hopefully not enough to make your eyes water. 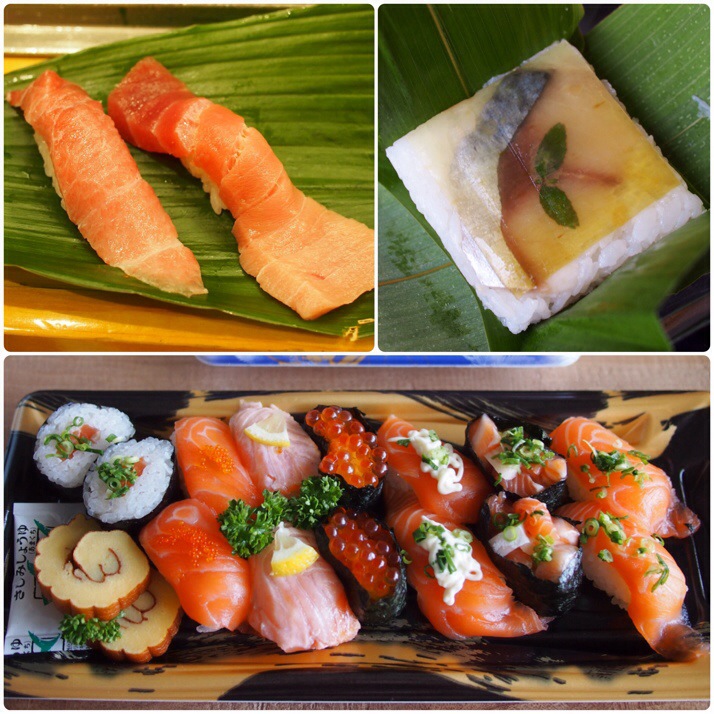 Sushi (clockwise from top left): tuna is the king of sushi fish, fatty and medium-fatty tuna freshly made at a restaurant in Tsukiji market; mackerel sushi bought in Kanazawa station; mouthwatering salmon sushi takeaway box from a fish market on Kyushu

Sliced raw fish without the ball of rice is called sashimi. It’s usually served with a big pile of shredded daikon radish and sometimes with plain rice on the side. Dipped in soy sauce and at its freshest it just melts in the mouth. 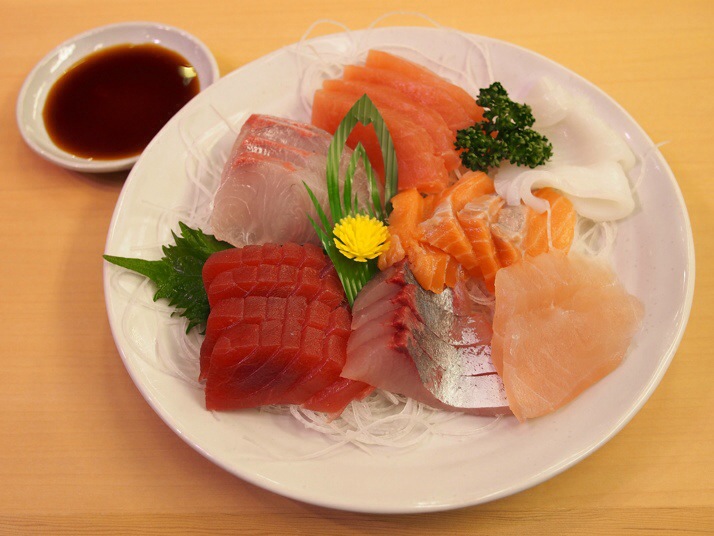 A plate of sashimi from a fishmonger in Kanazawa

We’ve had small fillets of grilled fish too, sometimes as part of a buffet or set meal and often one of the oily fish like salmon or mackerel. Squid and octopus are also common. We ate both freshwater eel and conger (sea) eel, both served grilled on top of rice with various condiments (spring onion, dried seaweed…). Clockwise from top left: a whole grilled squid; minced fish cake; grilled eel served on rice in Nagoya; a small grilled fish as part of our breakfast meal in Tsumago

Just as the fish in Japan is fresh enough for sushi and sashimi, the meat is also of high enough quality to serve raw. We had ‘basashi’, or horse meat sashimi, in Matsumoto and tender beef sushi in Takayama just flashed under a blowtorch, and of course the lightly grilled wagyu steak in Kobe. At the cheaper end of the spectrum, deep-fried breaded pork fillets, called tonkatsu, often form the protein component of a meal. Variations made with chicken are also common. Slices of roast pork are the usual topping for bowls of ramen noodles. We didn’t see lamb or mutton on the menu anywhere.

We have found three main types of noodles in Japan – ramen (egg noodles), udon (fat noodles), and soba (made from buckwheat). Soba noodles may also be served cold with the stock on the side as a dipping sauce. Supposedly, this allows the flavour of the noodles to come through and it’s actually much better than it sounds. 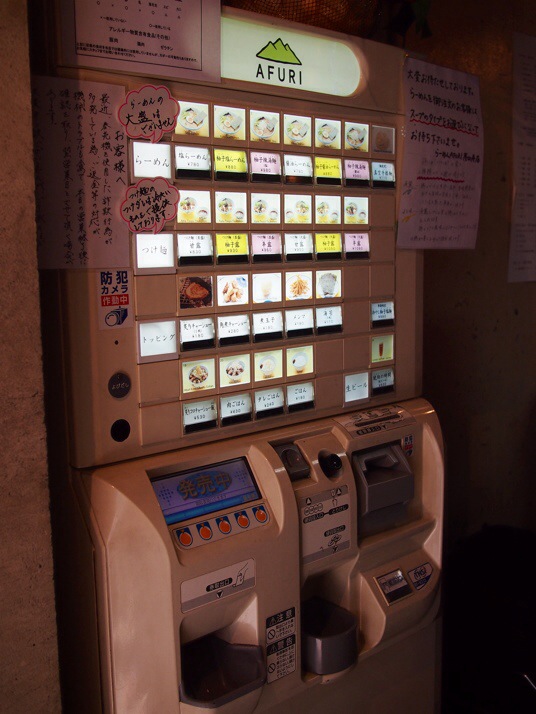 In noodle soup shops we’ve found that you usually don’t order from a waiter or waitress but by paying for what you want at a vending machine by the door and handing over the ticket that it prints out at the counter. That’s all very well if, like this one, it has pictures and English but we’ve had lucky dip noodles before by just choosing a random button!

Japanese noodles (clockwise from top left): ramen are commonly topped with roast pork; udon noodles with raw egg, mixed through the hot noodles with soy sauce we thought of it as Japanese carbonara; cold soba noodles with mushrooms from the convenience store; ‘hoto’ noodles are a specialty of the area north of Mt Fuji, these ones were served in a deliciously savoury beef broth

Onigiri are balls of cooked rice often with a small filling of meat, fish or vegetables. For us they’ve been a reliable option for packed lunch from any convenience store or supermarket. Because of the shape of the convenience store version we call them ‘rice triangles‘. I love the ingenious packaging which keeps the seaweed away from the rice and hence dry and crisp when you come to eat it. It depends on the shop but they rarely have pictures on (and never any English) so choice is generally pot luck. A grilled version flavoured with soy or miso is available in izakayas and we’ve found it to be a good filler amongst all the protein options. 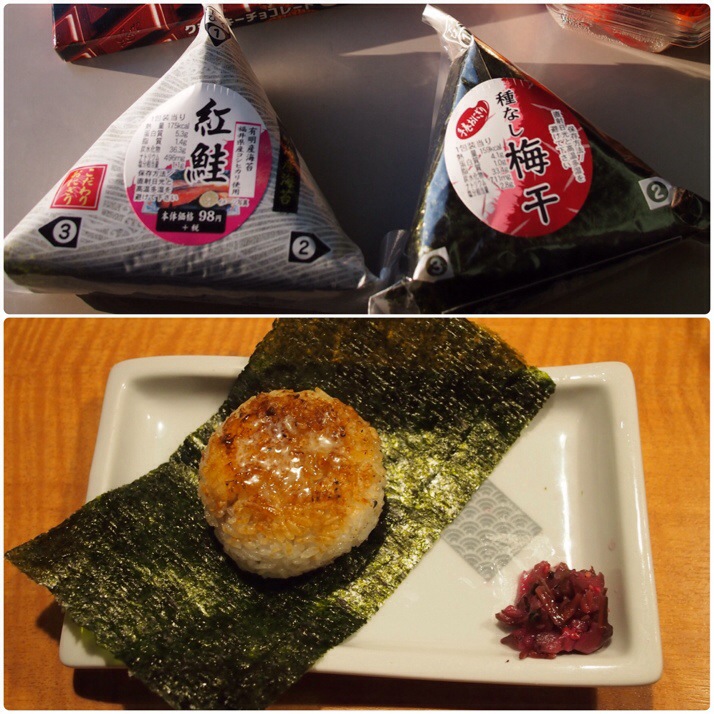 Convenience store ‘rice triangles’ and a grilled version in an izakaya

You might have come across tempura before. It’s deep-fried vegetables and fish in a light and airy batter. Most tempura restaurants had a set meal of tempura on rice with miso soup which was cheap and tasty, but it’s a common dish in izakayas too. It is always fried to order and so very fresh and crispy. We always save the prawn until last, but I like the slice of kambocha pumpkin too, and in one izakaya we had a sweetcorn version containing a slice from a corn cob – yum! 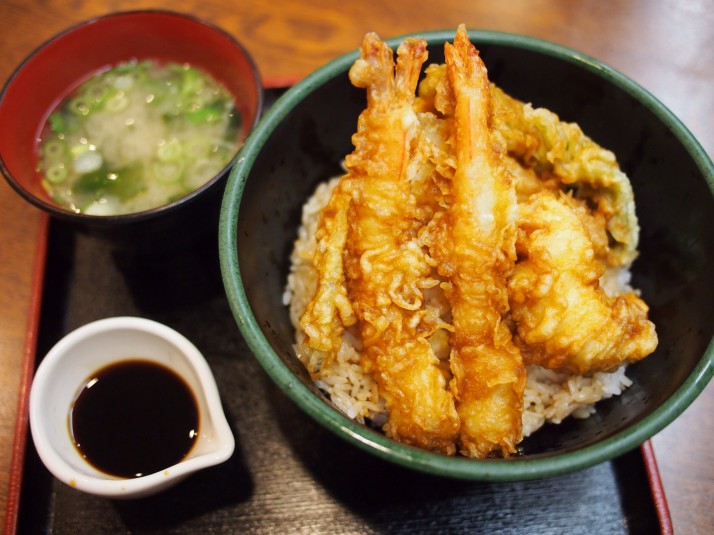 Japanese dumplings are one of Andrew’s favourites and he always orders them as a side dish with noodle soup. I was unenthusiastic about them until we went to a gyoza izakaya where the range of fillings and cooking methods was wide. We had them boiled, fried on one side (the most common way of cooking), deep fried and with pork, vegetables, and even whole prawns inside the dumpling wrapper. 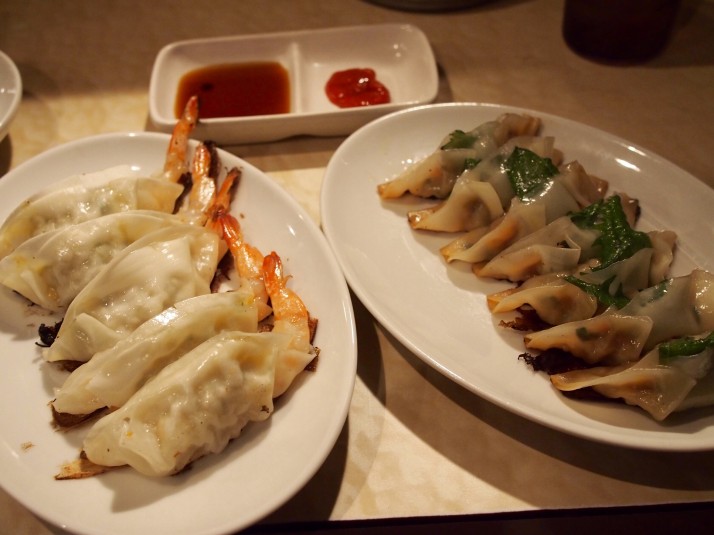 Somewhat reminiscent of fish’n’chip shop curry sauce we found Japanese curry to be a cheap, filling and comforting meal. It is usually a large portion of rice topped with a piece of deep-fried breaded meat (often chicken or pork) and covered with curry sauce. A special mention should be made for the oxtail beef curry which we had at a tiny restaurant near our apartment in Tokyo – something that I’m dying to try to replicate as soon as I return to my Le Creuset pot and a good source of oxtail.
If you need your curry on the go you can pick up a curry doughnut from a bakery! Yakitori literally translates as grilled chicken but it’s so much more – skewers of all kinds – meat, fish and vegetables. 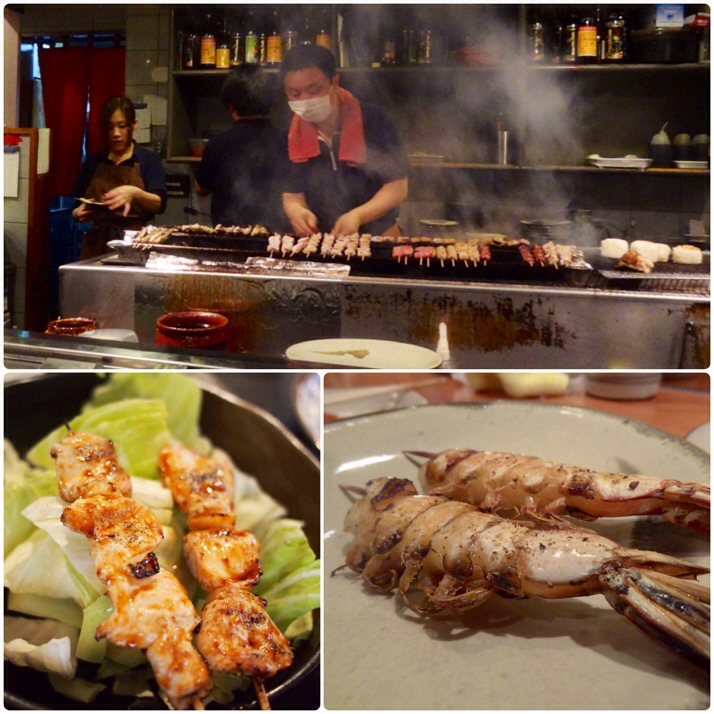 The open kitchen in a yakitori izakaya, grilled chicken and skewered prawns

A specialty from Osaka and Hiroshima which have different styles. We tried the Hiroshima version – pancakes, cabbage, noodles, sauce, fillings (mixed seafood and oysters in the ones we had) are piled high and served on a hotplate. 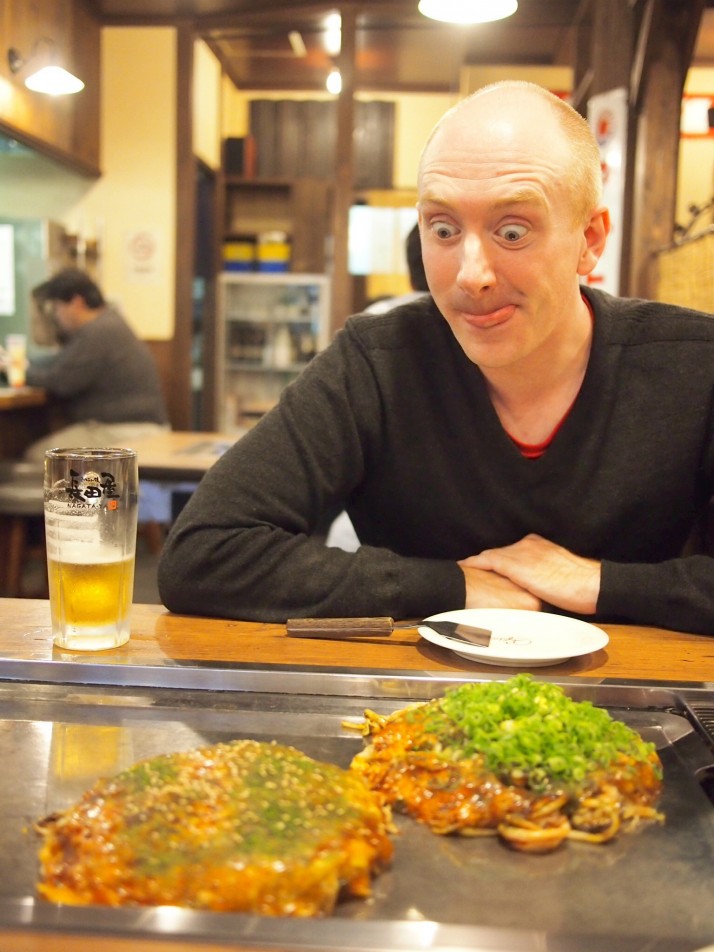 Products made from soybeans permeate Japanese cuisine. Soy sauce is used as a seasoning and a dipping sauce for sushi and sashimi, edamame or soybeans cooked in the pod are a common and tasty beer snack or starter, tofu of various kinds fills the supermarket chiller section which would be devoted to cheese back home, a bowl of miso soup is included as part of every set meal and natto, or fermented soybeans, are eaten as a breakfast food. Clockwise from top left: Edamame; a cube of tofu as part of a set meal; slimy natto is a taste we didn’t manage to acquire; a different kind of tofu as a topping for noodle soup

Despite the ubiquitous nature of much of Japanese cuisine, each region still has specialties which it is very proud of. From okonomiyaki in Hiroshima to lots of foreign influences in Nagasaki, different kinds of noodle dishes everywhere, and fresh peaches in Okayama.

Regional specialities (clockwise from top left): gohei mochi from the Nagano and Gifu regions of central Japan is a cake made from pounded rice, coated in a sweet nutty sauce and cooked over a charcoal grill; champon is a noodle dish from Nagasaki, its glutinous sauce and bamboo shoots betrayed its Chinese influenced origins; Kakuni Manju, tender roast belly pork in a steamed bun is another Nagasaki specialty from its Chinese immigrants; the area around Kagoshima in southern Kyushu is known for the quality of its ‘black’ pork (from the local black-skinned pigs)

For all its reputation as a very healthy cuisine we’ve found Japanese food to be very lacking in vegetables (restaurant food anyway) with the exception of the many varieties of pickled vegetables, a small dish of which accompanies every meal. The most common is some form of daikon radish, the enormous Japanese radish that is more like the size and shape of a giant white carrot. The only exception seems to be tonkatsu meals which are served with half a plate of shredded white cabbage only just made palatable by the addition of some sesame oil dressing. 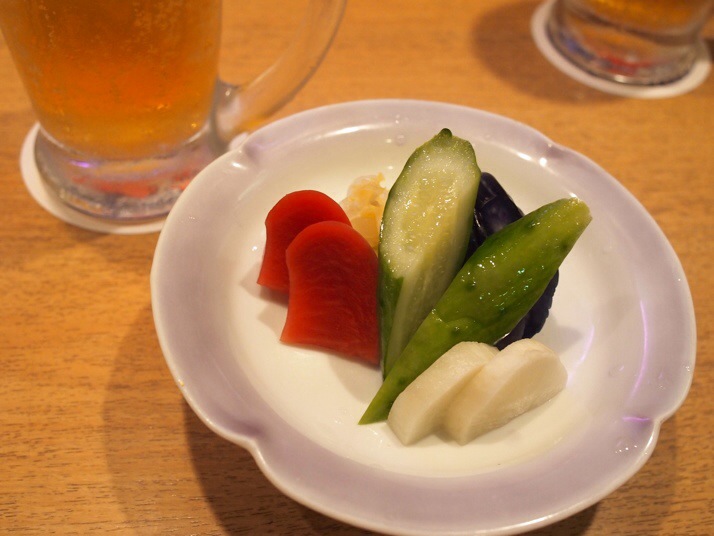 When we weren’t eating rice triangles for lunch a good option was to buy a bento box from the supermarket or convenience store. A mini feast, it will have a good portion of rice, some pickled vegetables and some form of protein, maybe a piece of salmon or katsu pork or prawns or a square of omelette or some combination of these. Then you’ll have a little sachet of soy sauce, and disposable chopsticks and a wet wipe from the cashier, and you’re all set for a picnic! 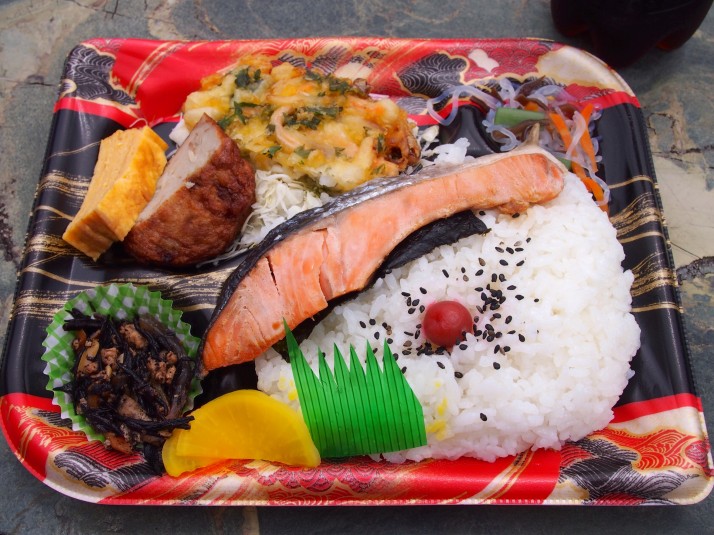 Breads tend to be soft, sweet and white with the exception of the expensive European style breads from upmarket bakeries that we gorged ourselves on in Tokyo. Similarly, cakes are usually extremely light and wispy in texture with extra sweet icing. We became obsessed with finding the small pancakes sandwiched together with margarine and super sugary syrup from the 7-11 convenience stores – just as trashy as they sound but completely addictive.

More traditional Japanese ‘sweets’ are often not actually very sweet. Mochi, made from pounded rice, are shaped into small balls with a variety of flavourings. Green tea is used as a flavouring more often than it ought to be in my opinion… Red beans, aduki beans cooked until very soft and gloopy, are also a frequently used ingredient. 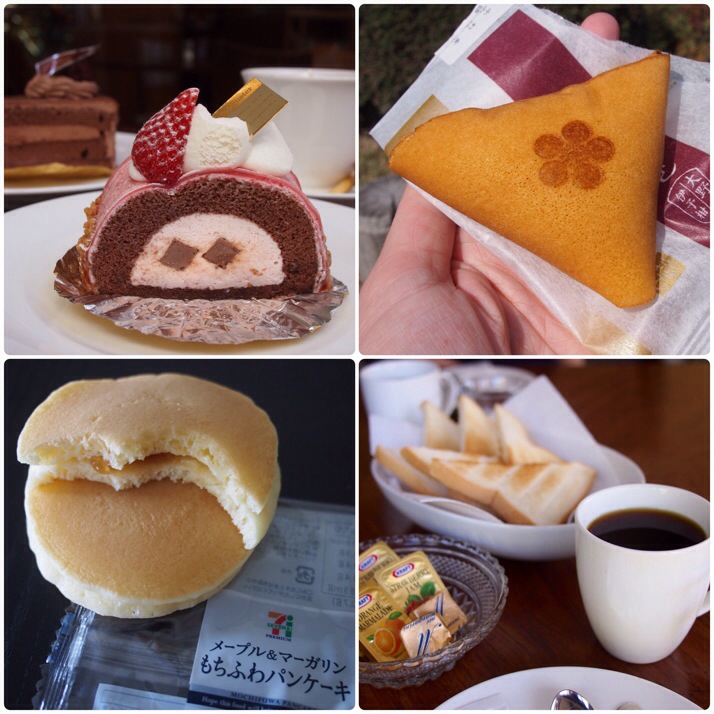 Nearly every time we sat down in a restaurant or cafe we were automatically given a glass of iced water which is a really nice touch especially if you’ve been out and about on your feet all day. Occasionally it was a cup of hot or, more often, iced tea also without charge and with as many refills as we wanted. About half of the time it was green tea, and half of the time a brown coloured beverage which we found to be vaguely reminiscent of buckwheat. I think that this was made from roasted barley, but we definitely tried a version made from roasted soybeans too. Beer was the most common form of alcohol that we drank. Due to some kind of strange tax loophole, the main breweries also produce something which is called malt drink. This more or less tastes like lager, and has a similar alcoholic content, but because it doesn’t contain hops it is around a third cheaper, so that was our carry-out drink of choice most of the time. And no trip to Japan would be complete without some sake (rice wine) drinking. We also tried its cousin, shochu, a spirit made from sweet potato, which tastes more like vodka. It was especially common in the far south of Kyushu with local varieties available in both Kagoshima and Yakushima. Tasting sake at a brewery in Takayama