I’m sure you’ve heard of the Moscow Kremlin. I hadn’t realised before we started planning our little trip that the word “Kremlin” actually means fortress, and isn’t just the exclusive moniker for the most famous of them.

The Moscow Kremlin is the centre of Moscow, and we were surprised to find that all of the places Moscow is famous for are either a block away, right next to, or actually inside the Kremlin walls themselves. 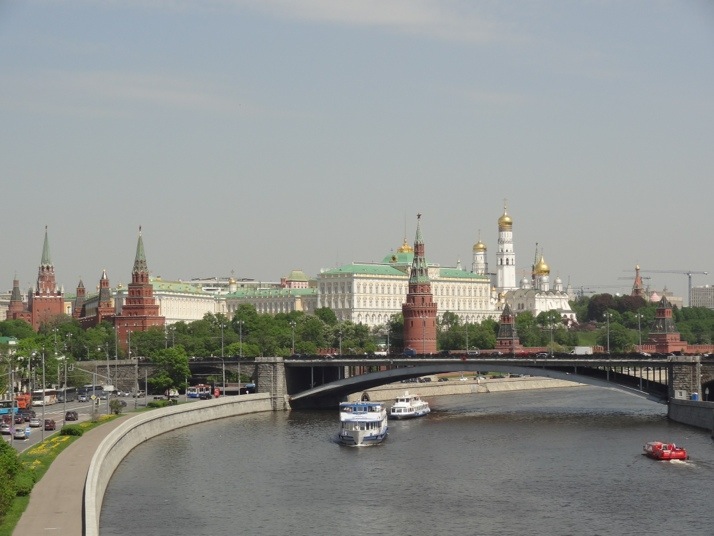 The Moscow Kremlin, viewed from the footbridge over the Moskva River. The white and gold building in the centre is the Grand Kremlin Palace, and the golden domes belong to Cathedrals and Bell Tower

We arrived in Moscow a week or so before the Victory Day celebrations, to find most of Red Square – which is the long, cobbled space outside the east wall of the of the Kremlin – closed for the massive military parade preparations. After a short walk around the outside of the magnificent St Basil’s Cathedral which is in Red Square, and the impressive and expensive ГУМ (pronounced “Goom”) shopping arcade adjacent, we decided to return a few days later when we could spend a full day in the Kremlin. Our first evening in Moscow, outside the magnificent St Basil’s Cathedral 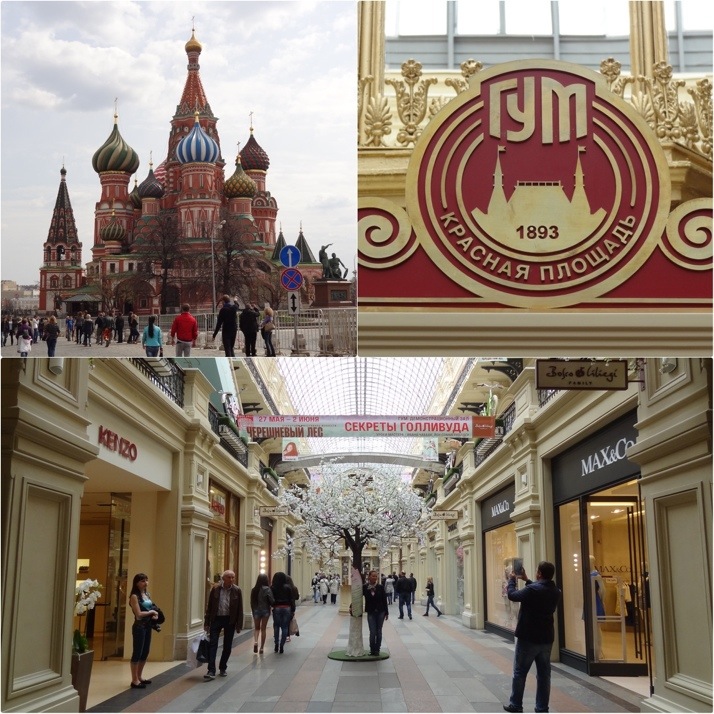 St Basil’s Cathedral from the Red Square side, and the one-time exclusive ГУМ shopping centre

Our guide book states of visiting “[the Kremlin] .. may be partly or completely closed without warning if there are VIP visitors”. Unknown to us and the 80-odd people stood at the ticket offices at 1pm that John Kerry, the USA Secretary of State was inside. Not only was there no warning, but there wasn’t any notification on the ticket offices at all – not even in Russian! The Kremlin was simply shut. 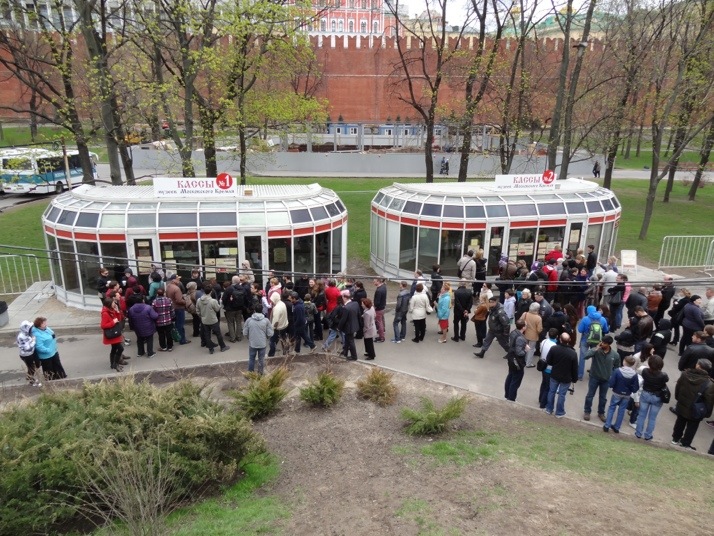 Moscow Kremlin ticket offices – closed. The queues kept moving, but it was because people were giving up!

We tried again the next day and.. sunshine and success! 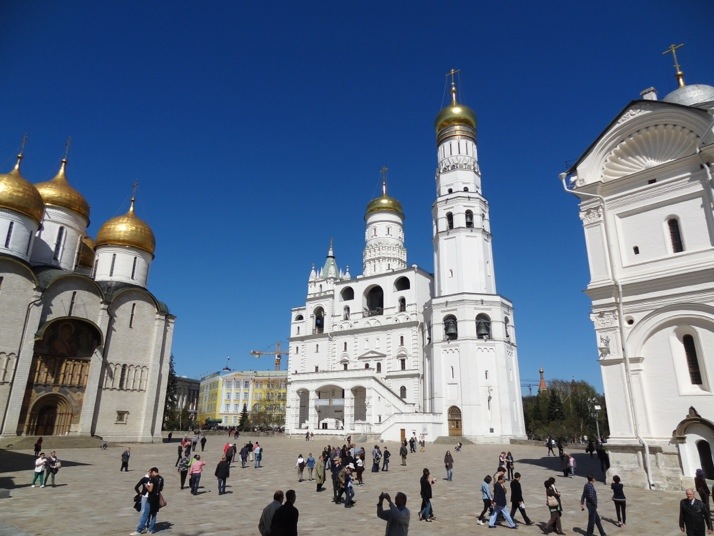 The aptly named Cathedral Square in the centre of the Moscow Kremlin. Left to right: The Assumption Cathedral, Ivan the Great Bell-Tower & the Assumption Belfry & the Filaret’s extension, The Archangel’s Cathedral

There’s strict security to get inside the walls (as one would expect) and there are uniformed guards at every corner ready to blow a whistle at you if you stray off the designated path, but it’s so worth the visit. Cathedral square is stunning. The interior is elevated to the height of the walls which adds to both the view, and the feeling of safety and superiority as you look out over the Moskva river and the southern Moscow skyline. 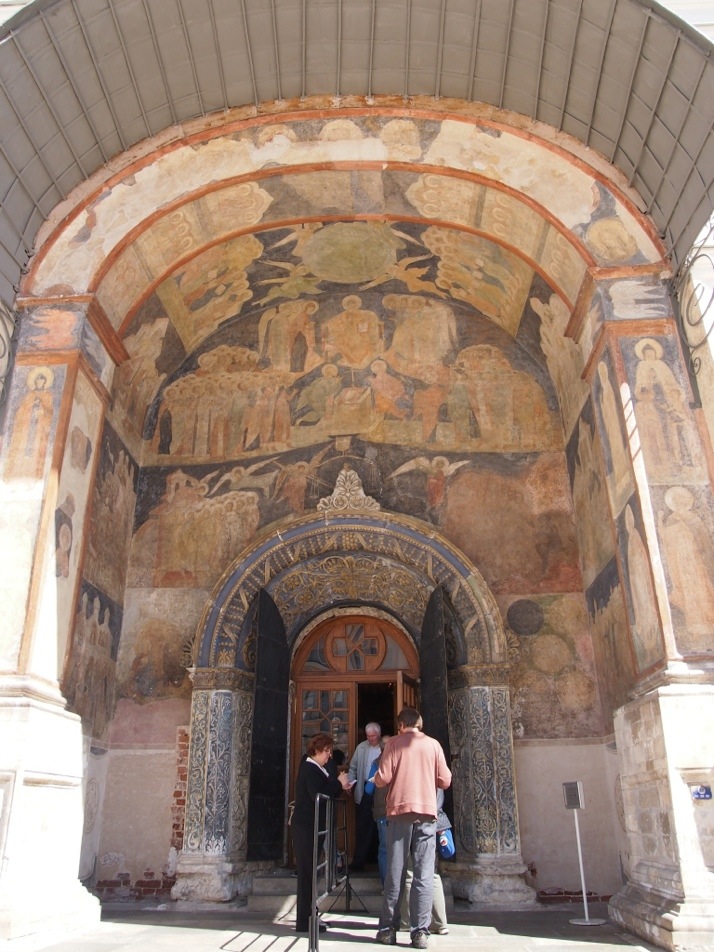 Entranceway into The Archangel’s Cathedral

Unfortunately we don’t have any internal pictures of the Cathedrals as photography isn’t allowed. 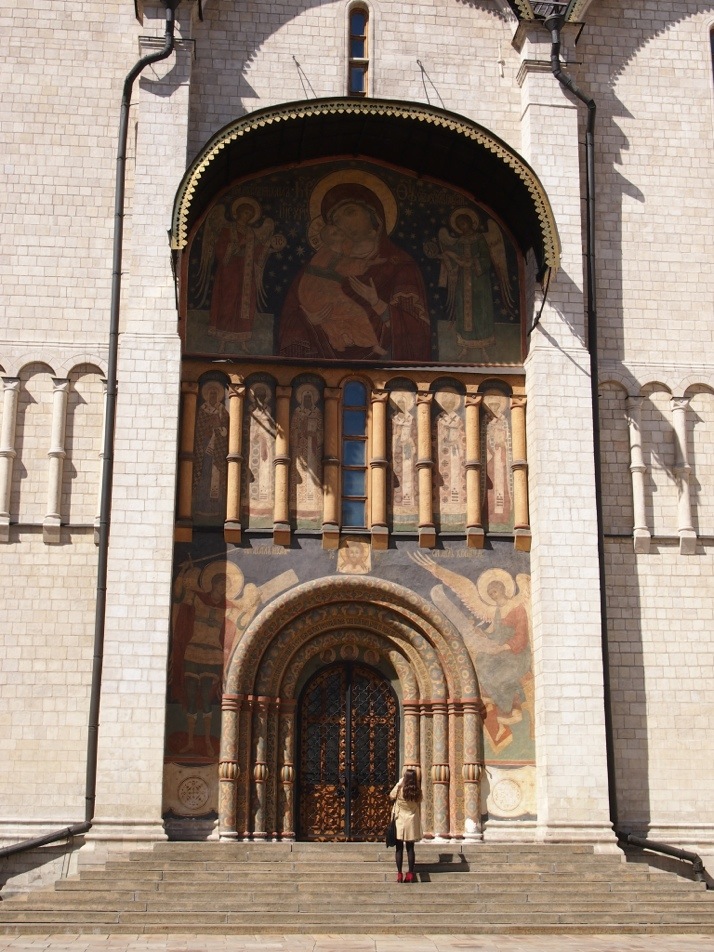 Main entranceway into The Assumption Cathedral 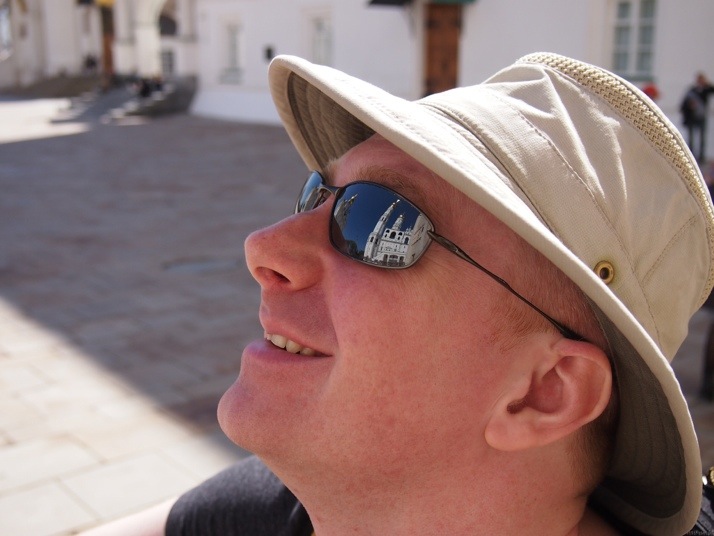 As well as the amazing Cathedrals, there are two massive Tsar artefacts in the Kremlin grounds: 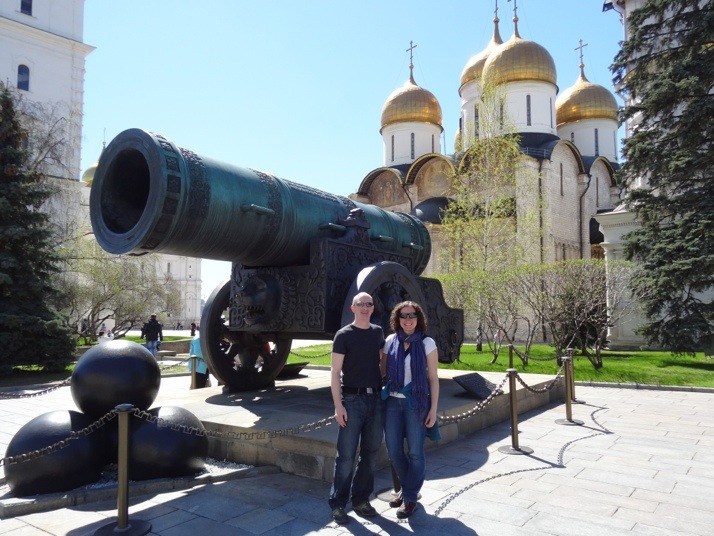 The Tsar-Cannon – never fired in battle, and apparently only ever fired once After a quick stroll in the secret gardens (which aren’t so secret as you now know about them), we were ushered out of the Kremlin as it closes promptly at 6pm.. not before I noticed the empty guard boxes on the way out.. 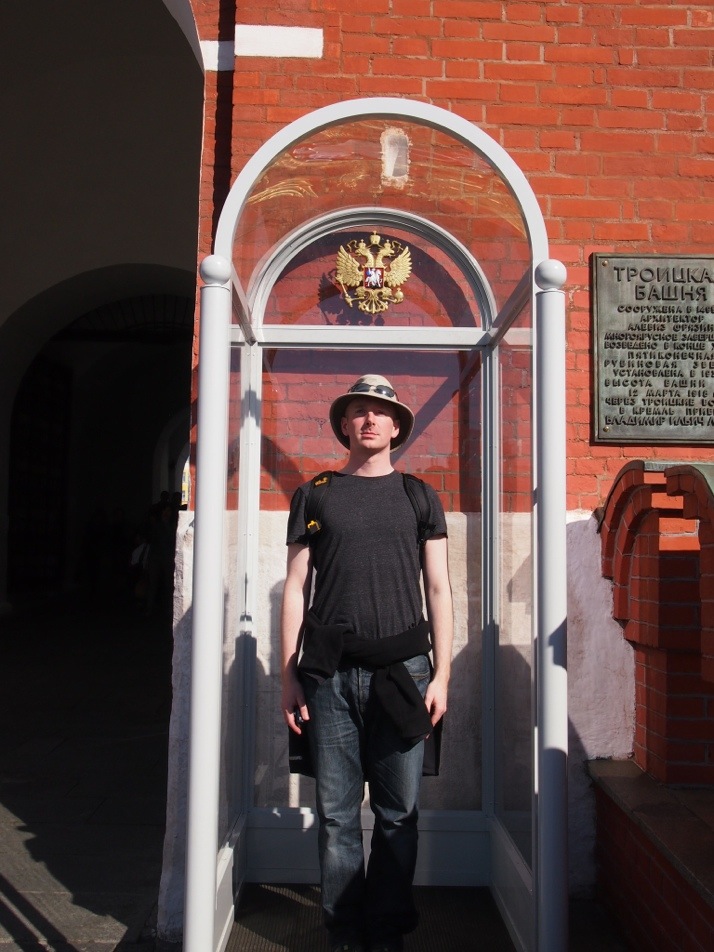 We wanted to visit the Kremlin again, this time to see the Armoury Chamber – a purpose-built museum to house the riches of the Tsars. Getting tickets was easy, but they’re for timed “seances” of two hours in duration. We arrived at the gate about 10 minutes past the start of our allotted “seance”, to find an extremely slow-moving queue of one security gate at the southern Kremlin entrance, compared to the 8 or so for the main western one. 40 minutes later with half our allocation spent on queuing, we were in. 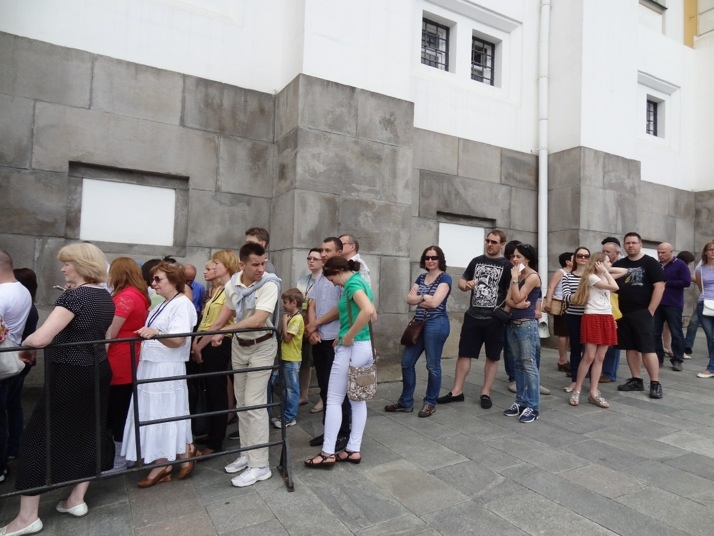 Third queue of the day – almost inside the Armoury!

On the positive side, the excellent audio-guide is included in the price, and for all we thought we would get rounded up at 11:30, our fears were unfounded and we were able to walk back through some of the rooms and re-visit their vast collections, ignoring the time constraints.

We agreed that this is the best, most well-laid out collection we’ve ever visited because of its size, variety of the collections, and for me at least, the way the exhibition differs room-to-room. For example, the first room contains religious iconography with intricate gold thread and jewels. The next contains weaponry: rifles, duelling pistols, swords and armour gifted to the Tsars and created by the craftsmen of the Armoury, and so on it goes, every room is something new and a change from the last which keeps the interest piqued. As part of the Armoury’s collection are 10 Fabergé eggs. Some of them were on loan when we visited, and it would have been thoughtful had they put a photo in their place – especially as the audio guide described two of the ones on loan! I didn’t know that they were made to order, some taking two years to make, and contain a secret inside that was relevant to the intended recipient. We’d have loved to have seen the Trans-Siberian Railway Fabergé egg! 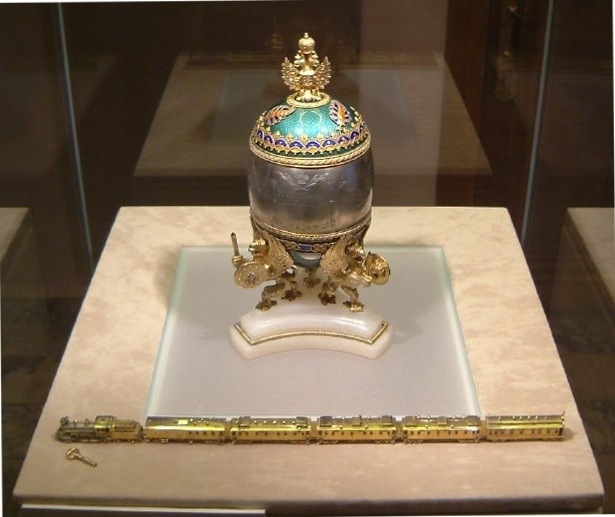 After leaving the Armoury and the Kremlin for a spot of lunch, we queued again to catch the first afternoon “seance” of the Kremlin’s Diamond Fund.
We’d read plenty of information of how you actually get to it, and it all seemed a little complicated – indeed it is..
The Diamond Fund is in the Armoury museum building, but it’s managed by a different government department to the Armoury which means the tickets can only be bought once you’re inside. To get into the Armoury you either need an Armoury ticket or you can just say the Moscow Kremlin equivalent of open sesame.. “Diamond Fund”. This not only got us into the building, but past the ticket gates too – if you didn’t want the audio guide (and you had the front to try it), you could visit the Armoury for free! – up the stairs and en-route is the Diamond Fund entrance and ticket desk. There’s a small waiting area and despite queuing outside for half-an-hour past the stated opening time to get in we’d timed it perfectly.

The Diamond Fund has even tighter security – no cameras, phones, or bags are allowed and there’s an extra security checkpoint just before the entrance which feels like you’re stepping into a posh bank vault.

Oh but inside.. Wow! The darkened rooms accentuate the sparkling wealth on show. The first display cases contain un-cut diamonds grouped by size and colour, arranged in tubes about the size of toilet rolls, maybe 15 or so tubes per case and easily 40+ diamonds in a tube.

As you progress though the first of the two rooms, the diamonds get bigger and there are cut diamonds alongside other precious stones; rubies, emeralds, and sapphires – including the world’s largest sapphire.

In the centre of the room is a large square cabinet containing gold nuggets found in the mines of Siberia. Most are larger than your hand, and there are 3 Russian stamped gold bars on display too. 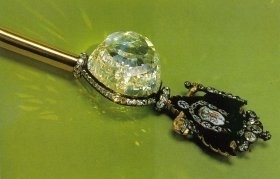 The second room contains intricate, ornate, and elaborate jewellery, including the massive Orlov Diamond, gifted by Count Grigory Orlov to Catherine the Great in the 18th Century, and believed to have been originally found in India, then subsequently stolen from a Hindu statue in 1750 by a deserter from the French army. Seeing it reminded me of the line from the movie Snatch: “Frankie four-fingers has a diamond the size of a fist” – it’s about the same size!

The two Kremlin museums are quite expensive to visit at ~£14 and ~£10 each respectively, but we thought they were worth it given the collections on display.