While we were chatting to the owner of the hostel where we stayed in Nara and telling him our rough plans for our travels in Japan he asked if we’d heard about Jomon Sugi, a really old tree in the centre of an island off the south coast of Kyushu. Well, we hadn’t but it sounded intriguing and after a little more research we found that the name of the island is Yakushima and that 20% of it has been designated as a UNESCO World Heritage site on account of the value of its ancient cedar forests. It was quickly added into our itinerary. 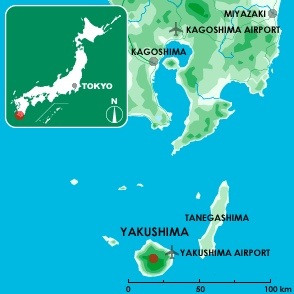 Several weeks later we had made our way as far south as Kagoshima. Our final day in the city was grey and rainy so it was a pleasant surprise when we woke the following morning to blue skies and bright sunshine. Especially pleasant as we had a four hour ferry journey ahead of us which really wouldn’t be nice if it was windy and raining.

Yakushima is 60km south of Kagoshima and there are three ways to get there, flight (very fast and very expensive), hydrofoil (takes about two hours and more moderately priced) and car ferry (takes twice as long as the hydrofoil and is half the price). We opted for the cheapest option but would recommend it to others if they have the time. The ferry was comfortable, uncrowded and Andrew was thrilled to discover that there’s an onboard sauna, although he didn’t get chance to make use of it. 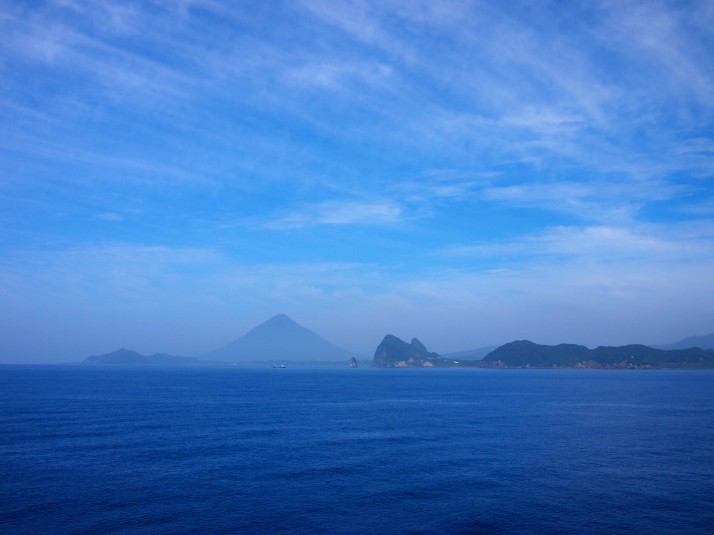 The end of the Satsuma peninsula seen from the ferry to Yakushima. The conical mountain in the centre of the photo is Mt Kaimon-dake. 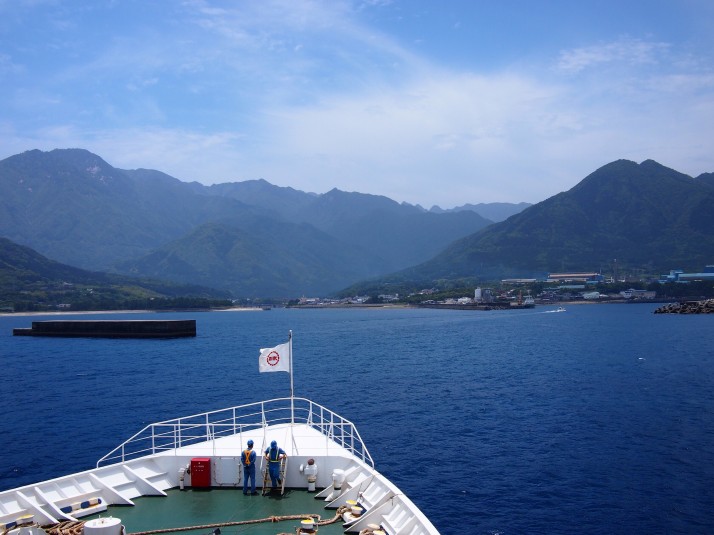 As the ferry approached Miyanoura port we were delighted to see flying fish scooting away from the ship (and stunned at how far they can travel). I was also surprised by how mountainous the island looked and began to feel a little nervous about the long walk to the old tree which we planned to do the following day.

Our first stop was the tourist office where picked up what has to be my favourite information handout ever – an A3 sheet with a map of the whole island, all the bus stops, points of interest and a complete bus timetable for all the routes – an obsessive travel planner’s dream tool! Next we wandered along the main street in search of lunch, eventually settling on Satchan where the friendly waitress managed to translate enough of the menu for us to decide on a set meal of Yakushima specialties. It was a delicious feast of sashimi, fishcake and grilled fish although the fact that it contained lots of flying fish made us feel a little guilty after admiring them so much from the ferry… 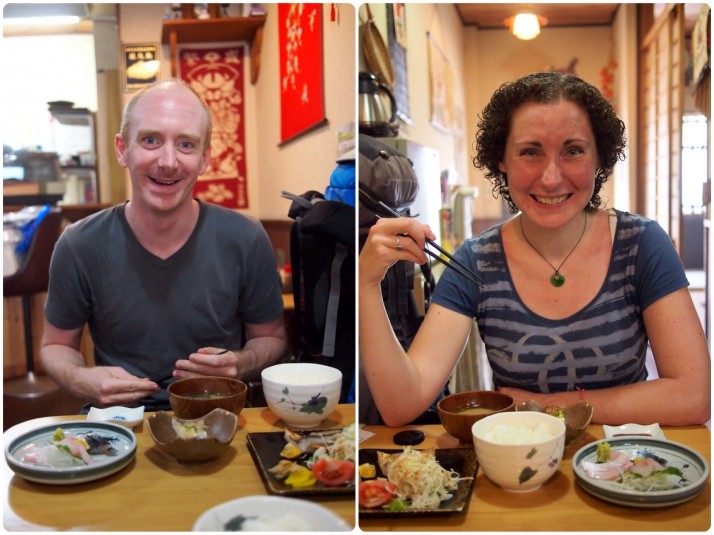 Excited to dig into our lunch!

Yakushima is famous for its ancient cedar forests and also has the rather dubious honour of being the wettest place in Japan receiving up to 10,000mm of rainfall per year. To put that into perspective, the wettest town in Britain, Dalness in the Scottish Highlands, gets an average of 3,300mm per year. Yes, that’s right, this place is three times wetter than Scotland! We had our fingers crossed for a dry day for the walk up the mountain and the forecast looked promising. 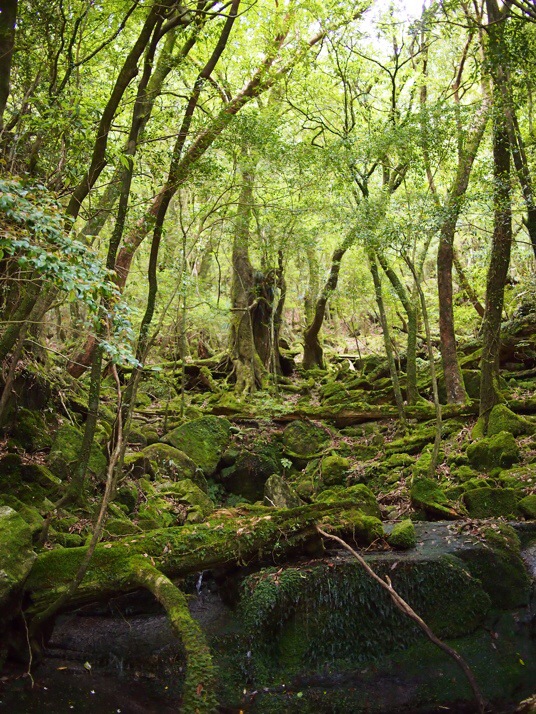 Our accomodation was a one hour bus ride from Miyanoura which Andrew managed to sleep through while I followed the route closely with my new favourite piece of paper. Alighting from the bus we found ourselves in the company of two other travellers, Brian from New York and Claudia from Zurich, and quickly realised that we were all staying at the same guesthouse. We spent the rest of the evening talking them into the early start that was necessary to join us for the 10 hour hike to Jomon Sugi. The only public transport option to the Arakawa Trail Head meant that we had to get up at 4.30am… Brian, Claudia, Julie and Andrew looking pretty chipper at the start of the trail at 6.45am

The first three-quarters of the trail are not too challenging. The path is along an old logging railway and the incline is very gentle although the distance is long (just over 8km or about 5 miles). We were by no means the only group to be doing the hike although most of the others seemed to be small groups of mostly middle-aged Japanese ladies with tour guides. Everyone was very friendly and by the end of the day, having passed each other numerous times, we almost felt like honorary members of some of the groups! 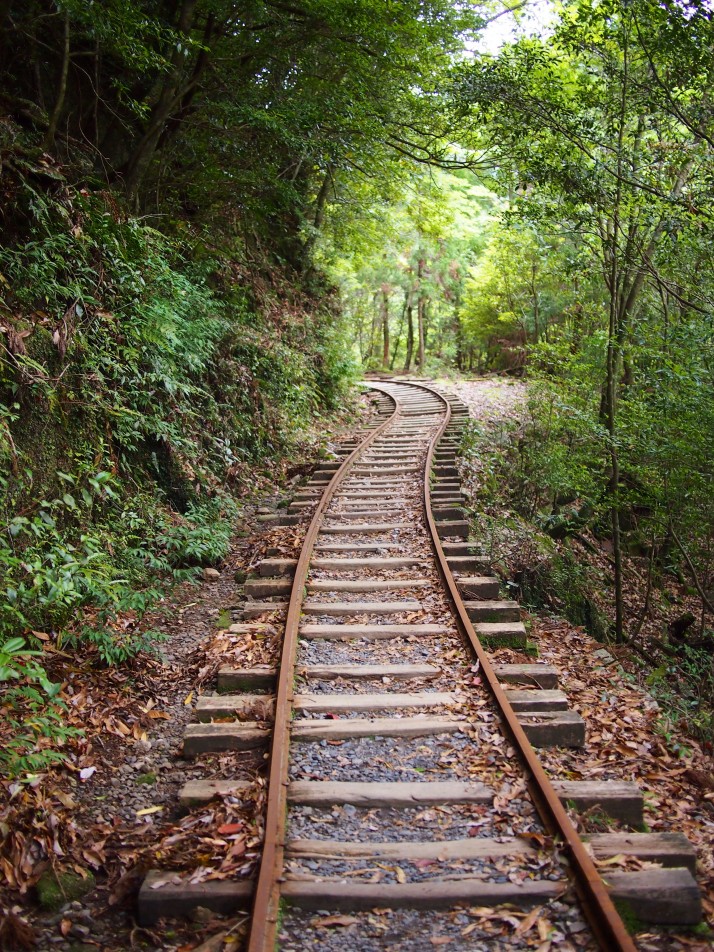 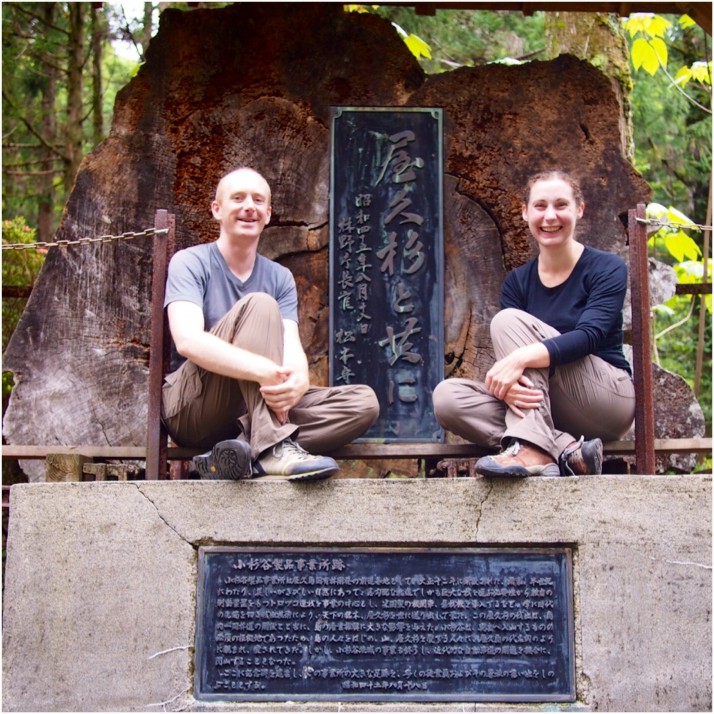 Us with a slice of the trunk of a felled cedar at the site of an abandoned loggers’ village part way along the trail.

The last section of the trail is only 2.7km (about 1.7 miles) but it is steep and the path is a combination of steps, boardwalk and twisty tree roots so we really needed to watch our step. This is close to the highest part of the island, where the old growth forest still survives. There are many old trees along the path and a couple of stumps too. Wilson’s Stump is big enough to fit about eight people inside and, when looked through from the right angle, the view up to the canopy from its centre is heart shaped. 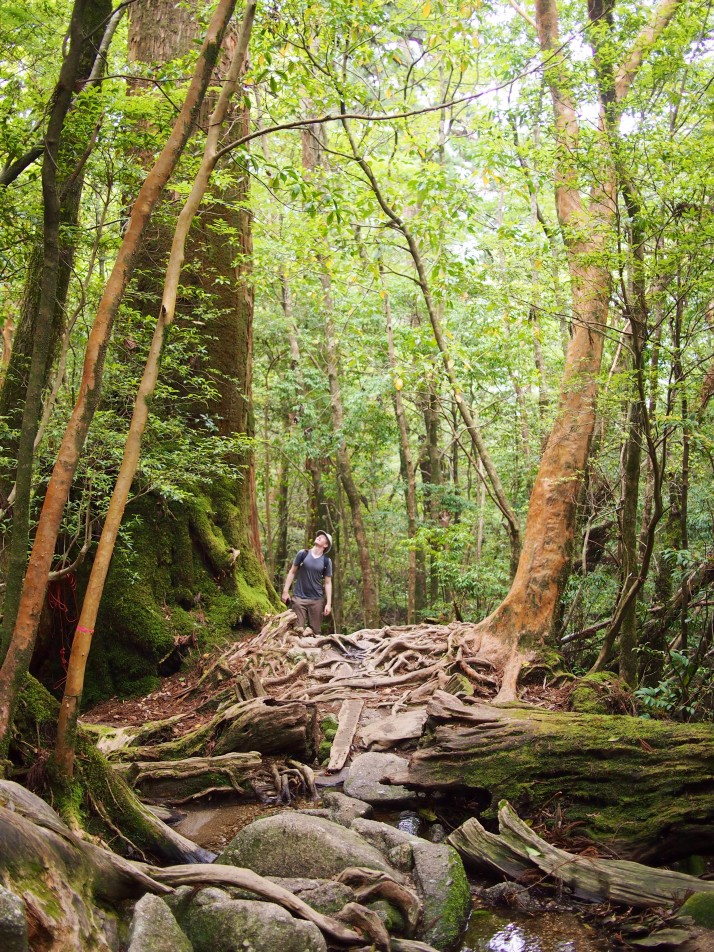 After seeing some incredible huge trees we thought that Jomon Sugi might be a bit of an anti-climax, but when we arrived it made us gasp. It’s the largest cedar ever found in Japan at 25.3m tall and 16.4m in circumference. Estimates of its age range from 2,170 to 7,200 years old, based on a scientific sampling of the trunk, and an estimate from its size respectively. Us with Jomon Sugi. Unfortunately this is as close as you’re allowed to go to prevent erosion around the tree’s roots.

After stopping for lunch, we then had to turn around and do it all in reverse. We just pressed on to get the hard part over and done with quickly and we were back on the railway line in about an hour and a half from where, even with tired legs, the going wasn’t too bad. Highlights of the walk back were seeing deer and a couple of monkeys (both sub-species indigenous to Yakushima) and also a brief stop away from the track at the riverside – the water is crystal clear and looks wonderfully turquoise blue in the sunlight. I was very tempted to give my feet a soak but eventually decided against it worried that once off, I might not be able to get my boots back on! 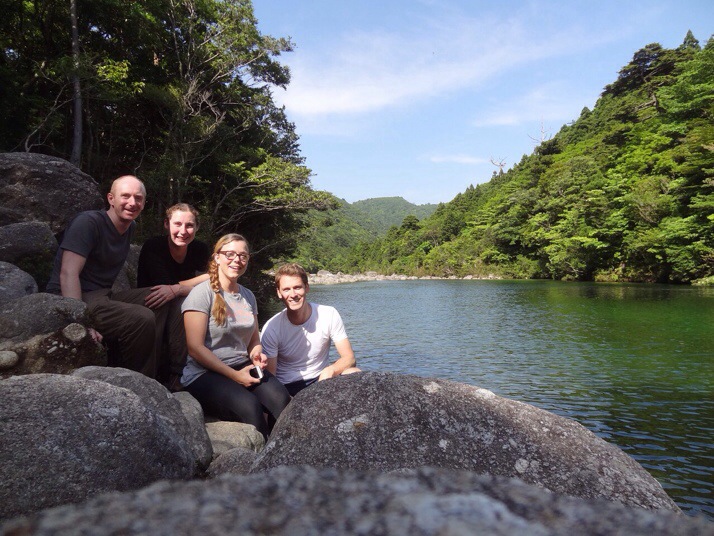 At the river in the afternoon sunshine

At last we made it back to the trail head in time to catch the bus back to the guesthouse. All four of us exhilarated but exhausted.

You’d think that after all that exertion we’d take it easy the next day but we only had two full days on Yakushima and we wanted to make the most of it so we hired bikes from the guesthouse and set off to explore the southern coast of the island. After picking up a picnic lunch, we made our way to Hirauchi Onsen to coincide with low tide. This hot spring bath is very much au natural, the sulphurous spa water bubbles up from beneath the rocks and is contained in crude concrete baths. It’s so close to the sea that it can only be used for a few hours either side of low tide. The onsen was exactly what we needed to ease our aching muscles and it left us feeling so relaxed that we thought we might go straight back to the guesthouse, but after a bite of lunch and a sugary drink we had a bit more energy and decided to carry on to see if we could reach the waterfall marked on our map. Turns out it was a bit further than we’d expected, but by the time we’d realised we were only a few kilometres away and so we pressed on. 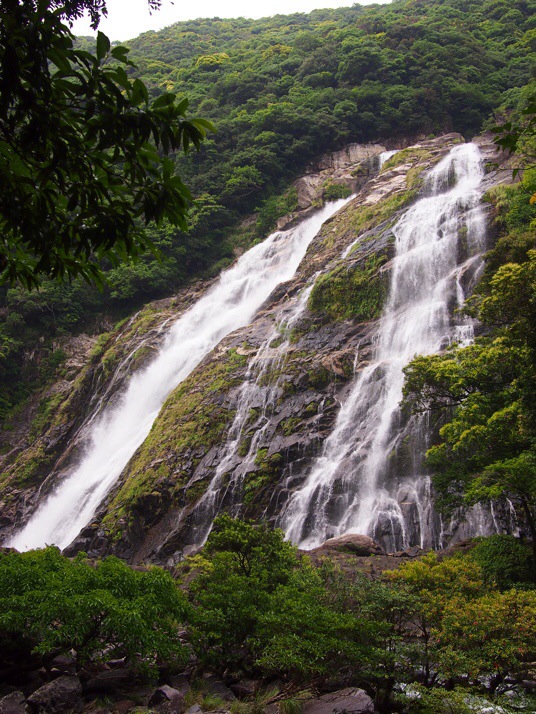 Ohko-no-taki waterfall with a drop of 88m was much more impressive than we’d expected especially considering that it was the end of the dry season.

By the time we got back to the guesthouse we were completely exhausted and when we worked out that we’d cycled a total of about 50km we joked that all we needed now was to swim back to Kagoshima and it would be like a three day triathlon! In the end though we decided to get the ferry instead… 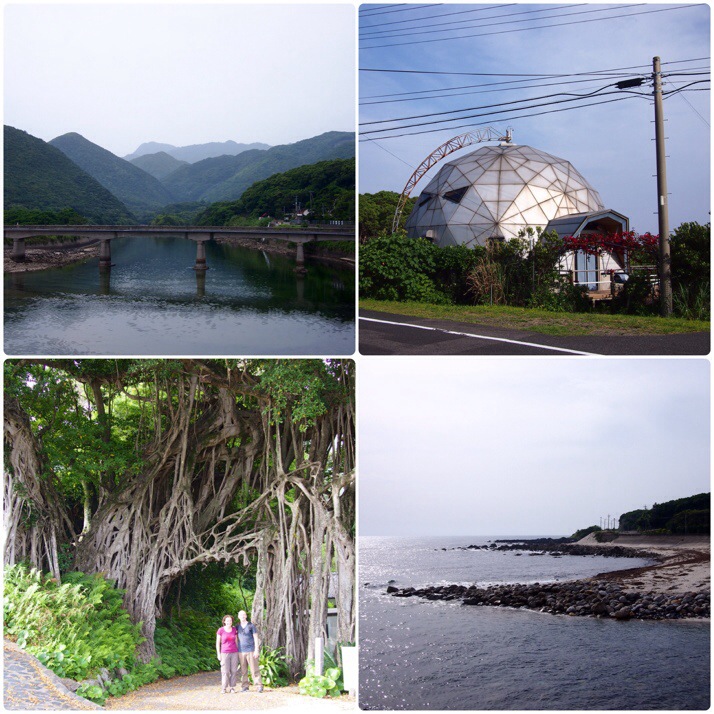 One of the very few things that we don’t like about travelling in Japan is that reasonably priced accommodation can get booked up fast and so we’ve found it necessary to have our accommodation booked well in advance. This denies us the flexibility to stay in places that we really like for longer than our initial estimate. We could easily have stayed on Yakushima for a week, gradually exploring the whole island and chilling out in its quiet greenness but unfortunately it wasn’t possible this time. We also started daydreaming about island hopping between the remote and small inhabited islands even further south so I think there’s a pretty good chance that we’ll be back!