Monreale is a small town just south of the main city of Palermo and an easy half-day trip as there are frequent busses from the centre and from Piazza Indipendenza that take about 30 minutes. The main, if not the only reason to visit Monreale is for its amazing cathedral.. 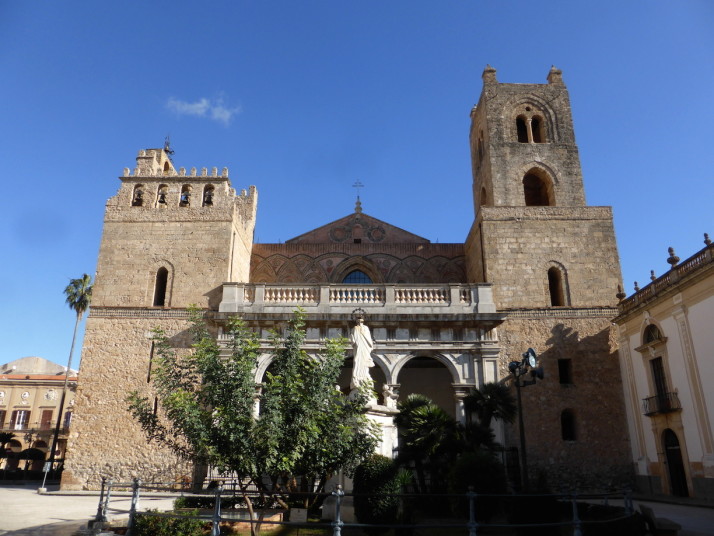 Monreale Cathedral – the front it pretty plain, but you can see a hint of the former decoration just above the porch which was a later addition 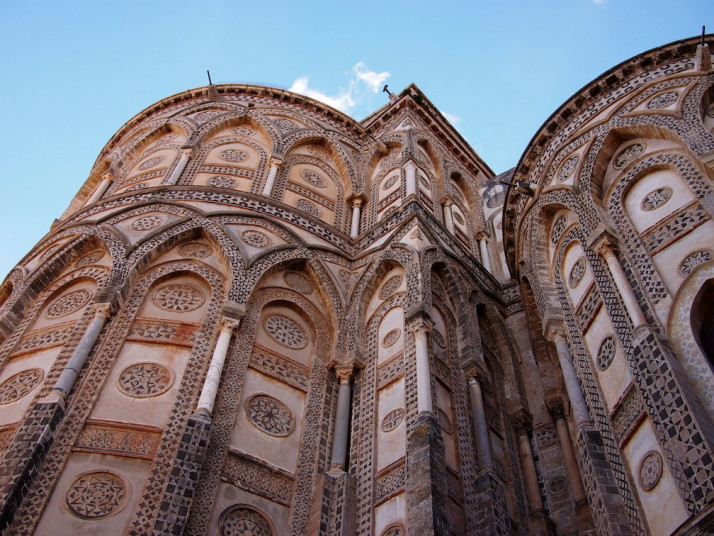 The rear, south-facing exterior is untouched and hints at the splendour that awaits inside..

Started in 1174 at the behest of the then newly crowned King William II of Sicily at the age of 19, his grand cathedral took just 4 years to build and then a further 14 years to decorate. Keen to show his independence as sovereign to nobles and subjects alike, William II was also known for the diversity of his court, and the decoration of his cathedral named “Santa Maria la Nuova” (Saint Mary the New) reflects the Arab, Norman and Byzantine influences of the day. 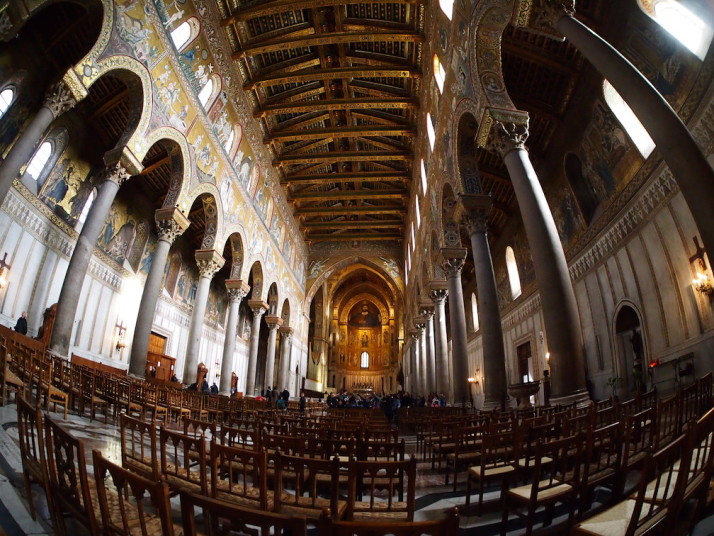 Wow. The wall to wall golden mosaics of Monreale Cathedral. Christian iconography with Greek and Latin inscriptions and Islamic inlays 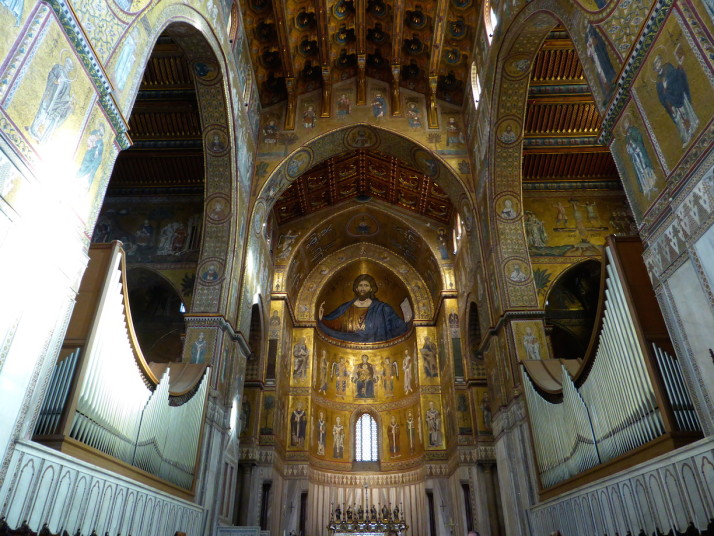 Close up of the Monreale Cathedral apse 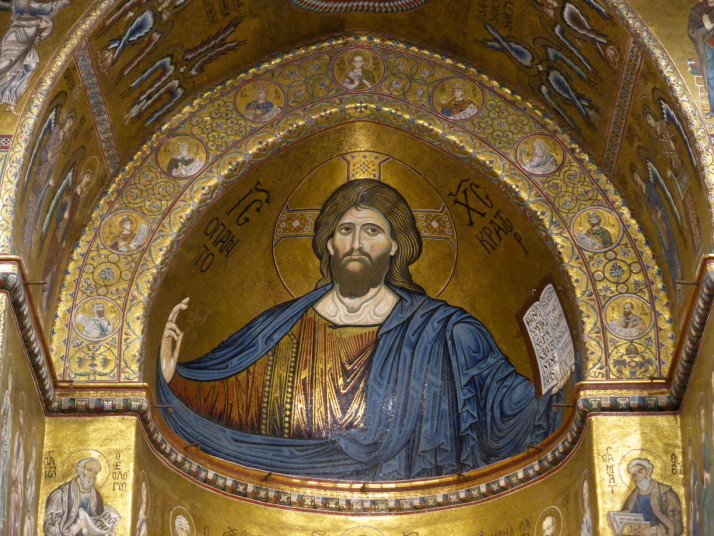 In hindsight, it feels like we’ve been working our way up to Monreale since we arrived in Sicily, and we couldn’t have planned the order of visits better. Sure, some stand out for different reasons, but when we got to Palermo we first went to the Cathedral in Cefalù and were amazed at the Christ Pantocrator in the mosaic-covered apse. Next was the Santa Maria dell’Ammiraglio Church in Palermo itself, a much smaller church with a similarly spectacular mosaic-covered apse but where the nave is a beautiful collection of painted murals. Then we reached Monreale which combines a similarly gorgeous wooden ceiling like the one in Agrigento with the mosaics of Cefalù, but that surround you like murals of Santa Maria dell’Ammiraglio. 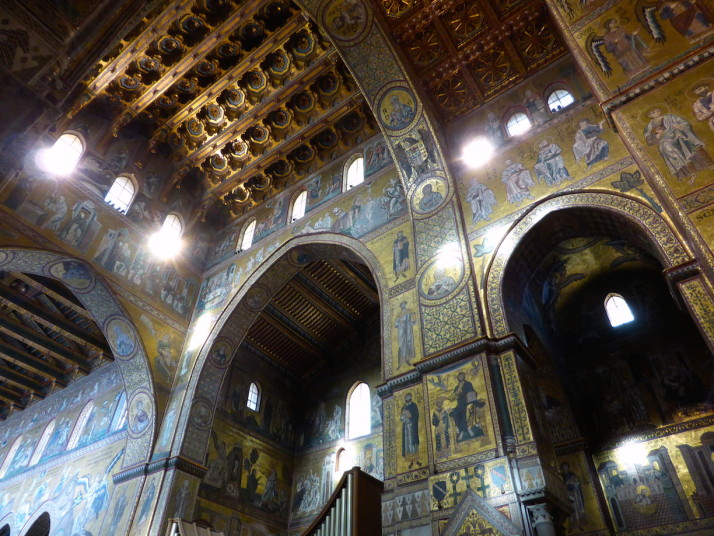 The rest of the amazing apse is covered with saints, martyrs and Sicilian royalty. Check out the ceiling too! 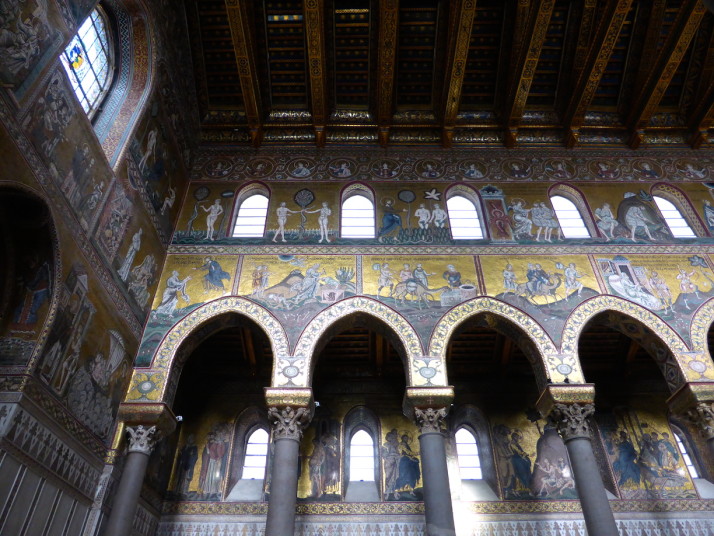 We found an online guide to the mosaics and really enjoyed walking through the biblical tales as they’re presented around the cathedral, such as Genesis pictured here on the top row where God presents Eve to Adam, they pick the forbidden fruit and are then banished from Heaven Unloading the Ark. We loved the style, the attention to detail and the clever use of patterns in the mosaics 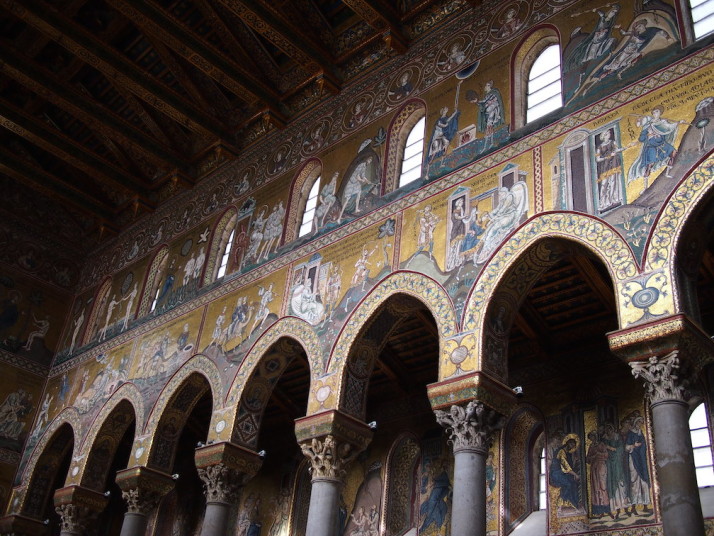 Other stories we recognised where those of Isaac and Rebecca and their children Esau and Jacob, also from Genesis.

Although it’s free to enter, there are a number of combination tickets that gain entry to restricted areas of the cathedral. We bought the €8 ticket for the gallery and the north-eastern nave, the latter of which we initially thought was steep as it appeared to be a mirror in layout to the south-eastern nave where King William I and II are interred, we then saw it contained a door to the Chapel of the Cross.. 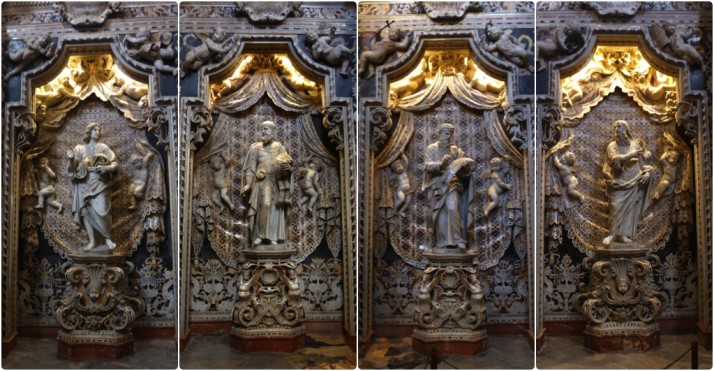 The entrance to the Chapel of the Cross opens up to a small room where 4 beautiful marble prophet statues greeted us: left to right: Daniel; Isaiah; Jeremiah; and Ezekiel 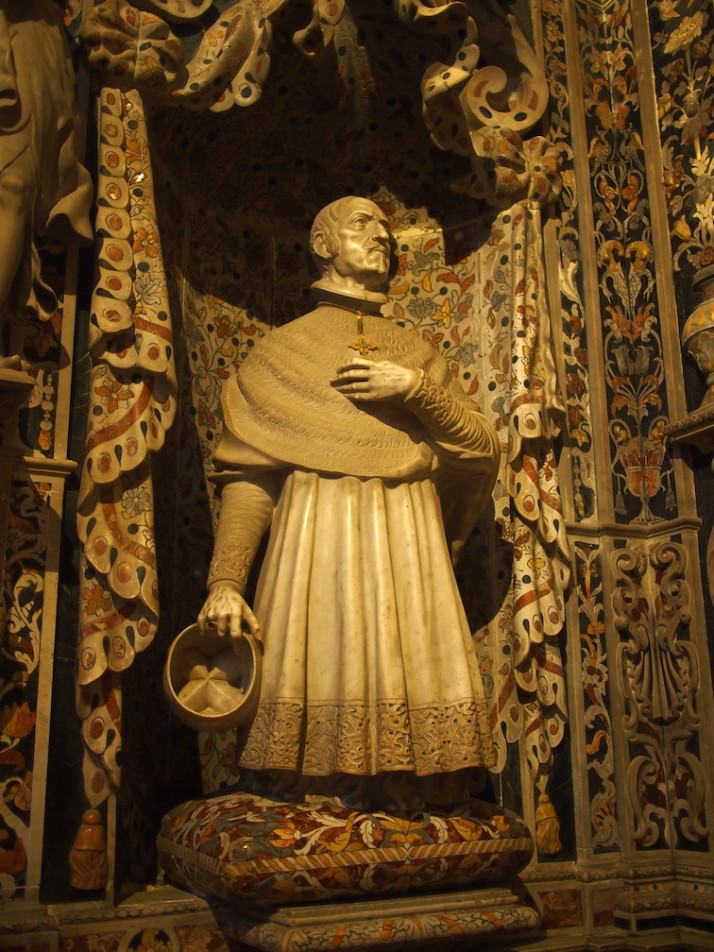 The gallery ticket was a little misleading as we thought the gallery would give us a view of the inside of the cathedral, but since all the doors pointing inward were nailed shut we just enjoyed the view of the cloister. We were quite surprised to find that the route took us all the way to and up onto the roof of the rear of the cathedral! 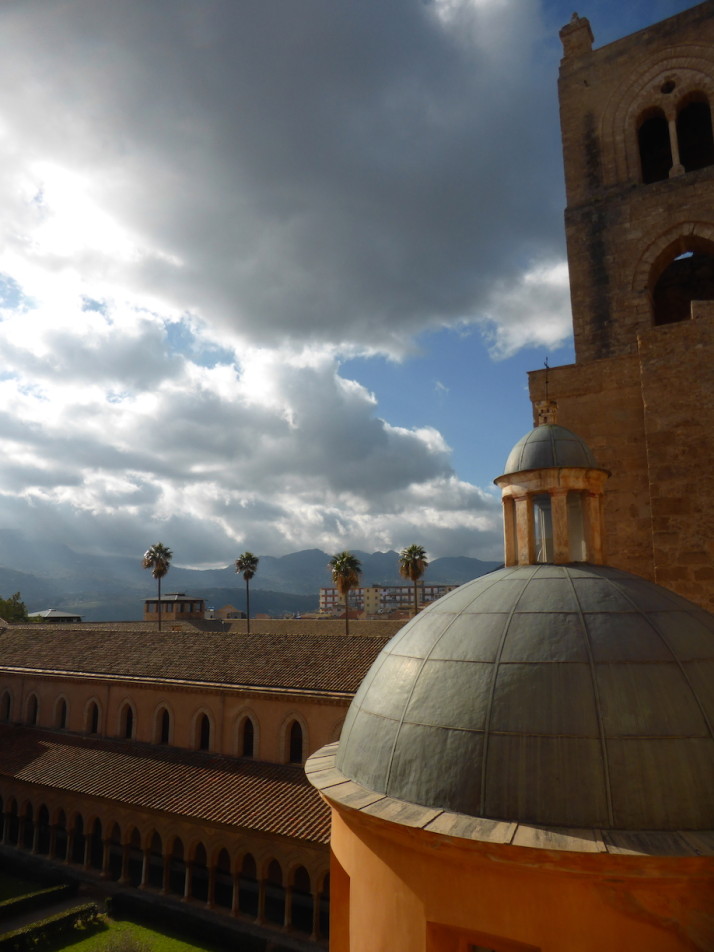 The view of cloisters, Monreale and east towards the coast and Palermo rounded off our amazing visit to this stunning cathedral

We also couldn’t help but draw parallels with Haghia Sophia in Istanbul. While they are both architecturally Byzantine, the Islamic elements of Haghia Sophia were added afterward and often at the expense or destruction of the original mosaic artwork. Here at Monreale they exist together.