We took the Phuong Trang bus company’s coach to Can Tho and found the orange livery to be somewhat reminiscent of Easyjet (the mid trip comfort break is even at a bright orange service station!). However, the plentiful leg room, assigned seat numbers and free bottle of water indicated that its service level is a cut above the budget airline. The staff were also unfailingly helpful, from the ticket clerk who changed us onto the bus before the one we’d reserved as we arrived in plenty of time, to the security guard in the waiting room who helped us find a coffee shop in the bus station and told us when to board.

We arrived at Nguyen Shack in the early afternoon and almost immediately felt the frenetic stress of Ho Chi Minh City dissipate. The homestay/guesthouse is a 800m walk from the main road at the end of the path so there’s no traffic noise unless you count the gentle put-put of occasional passing outboard motors from the river. On arrival we were given a refreshing glass of lime juice and introduced to Theu, who originally opened the guesthouse, and her Canadian boyfriend Maxime, as well as their pets – Toto the cat, Pako and Charlie the dogs, and Bacon the diminutive Vietnamese pig – before being shown to our room, a bamboo hut on stilts with easy chairs on a balcony overlooking the river. Bliss. We unwound for a couple of hours, reading and watching small boats and large clumps of water hyacinth drift past. 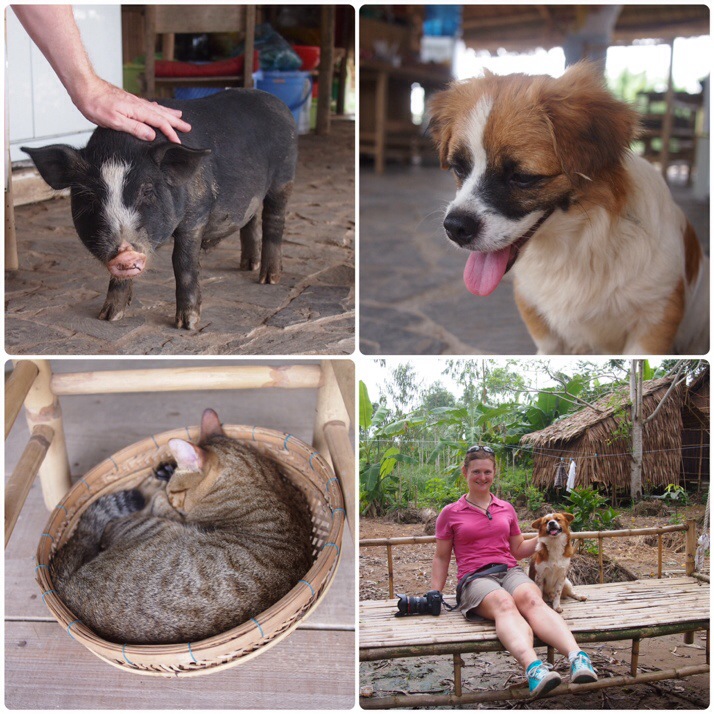 The Shack’s pets (clockwise from top left): Bacon enjoying a back scratch, Charlie, Pako keeping Jo company on the swing, Toto asleep in our room’s bin 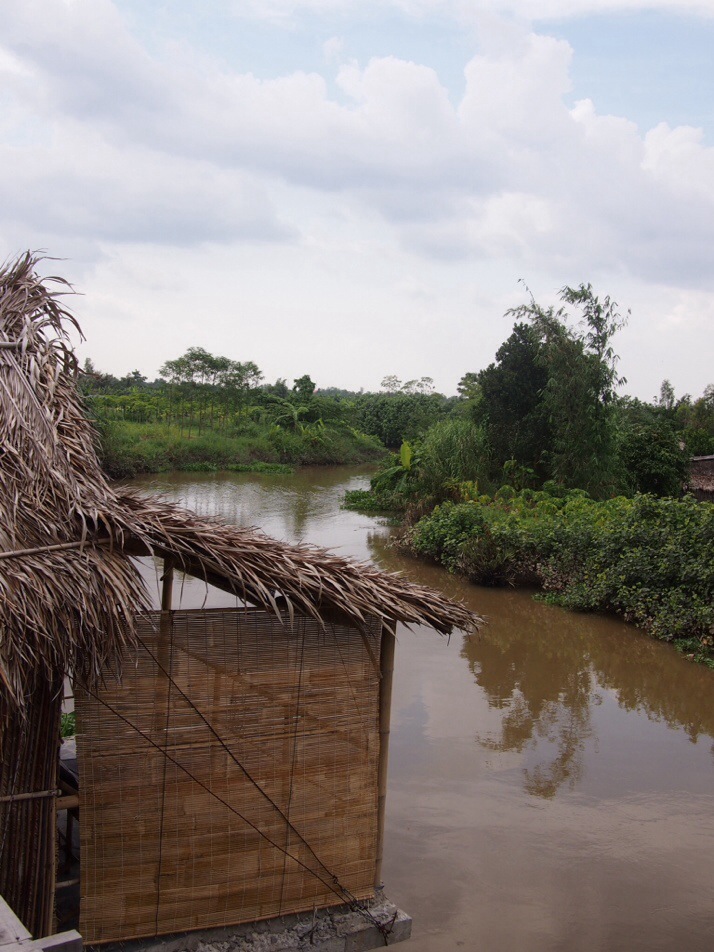 View from our balcony

At 4pm we made our way downstairs to join the sunset boat tour. As we were the only guests to have checked in so far that day we had the boat to ourselves. The boat meandered through the small river channels, past houses and under bridges. Children screamed out ‘hello’ and waved frantically to attract our attention, and adults would smile and raise a hand as they carried on with their tasks. We later learnt that English is being taught as soon as children start school so even five year olds know how to say hello and can count in English as well as Vietnamese. It was nice to be somewhere relatively untouristed where locals looked on us with curiosity rather than as moving cash machines. Drifting quietly along the waterways we didn’t feel ourselves to be intruding and it was interesting to see how integral the river is to everyday life here from fishing to laundry and bathing to transport and commerce. 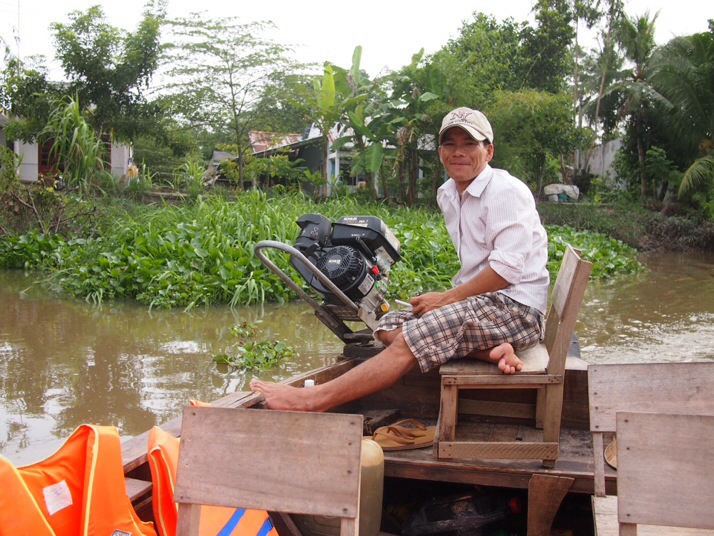 We think this couple were moving house, these girls were struggling to swim and wave at us at the same time! 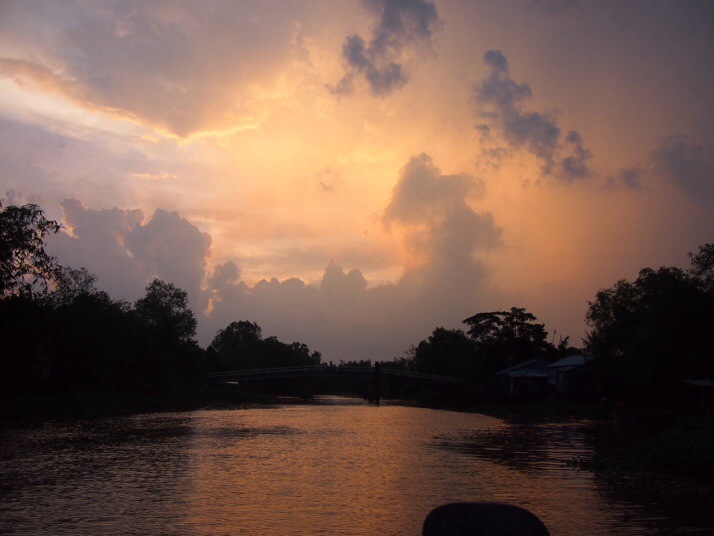 At around 5.30pm as we made our way back to the Shack the sky turned a pretty pastel pink – the promised sunset.

The next morning our alarms woke us at the ungodly hour of 5am for the tour to the markets of Cai Rang. One of the main draws for tourists to the Mekong Delta are the floating markets. These are conducted entirely on the river, vendors in large boats hang out examples of what they are selling on long sticks and customers row or motor their own boats around to make their purchases while small boats selling coffee and snacks weave in and out. Most of the action takes place before the heat of the day, between 6-8am, hence the early wake up call. We were joined on this tour by a honeymooning couple from America who’d arrived late the night before. 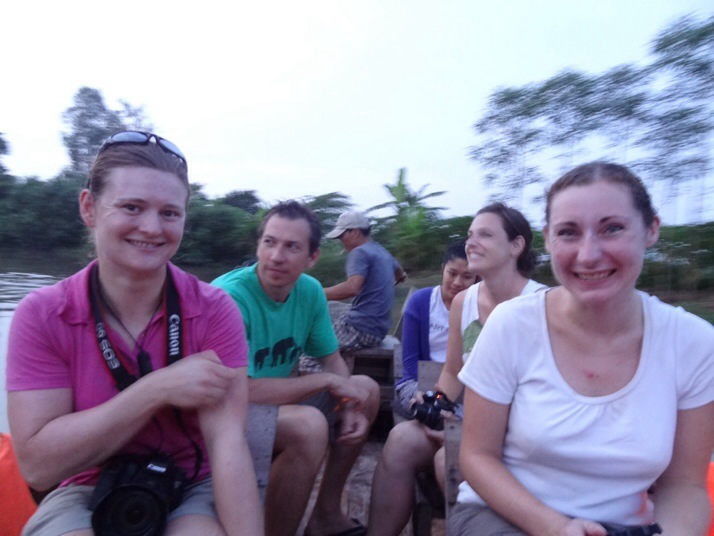 Looking remarkably chipper for 5.30am, Jo, Julie, the American couple, Phom the driver and our guide

The floating market wasn’t quite what I expected. Less bustling I think. Possibly one of the reasons for this is that it’s primarily a wholesale market selling fruits and vegetables to the smaller land based vendors. Another reason, our guide explained, is that since the road network in the delta has improved it’s not really necessary to have floating markets anymore. It’s easier and cheaper for people to get about by motorbike and so the floating markets are slowly dying. Nevertheless it was an interesting sight to see the barges piled high with pineapples and watermelons, and families slurping up noodles for breakfast on their decks. Long advertising poles with vegetables for sale tied on 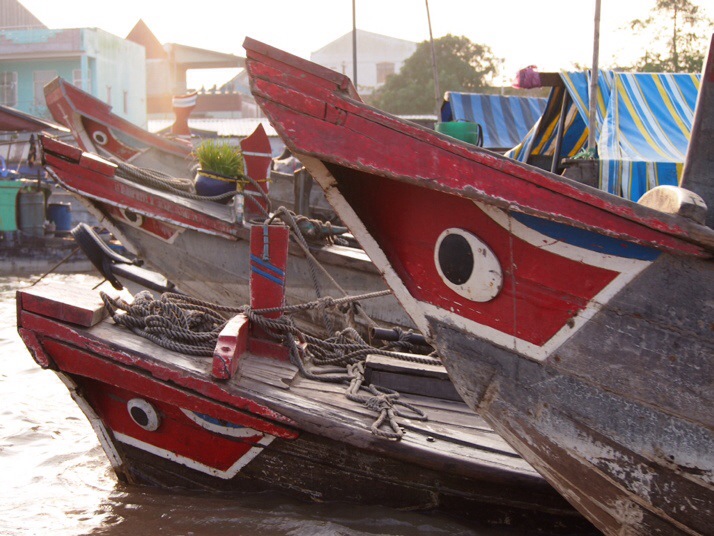 All of the boats have eyes. I’m not sure why. 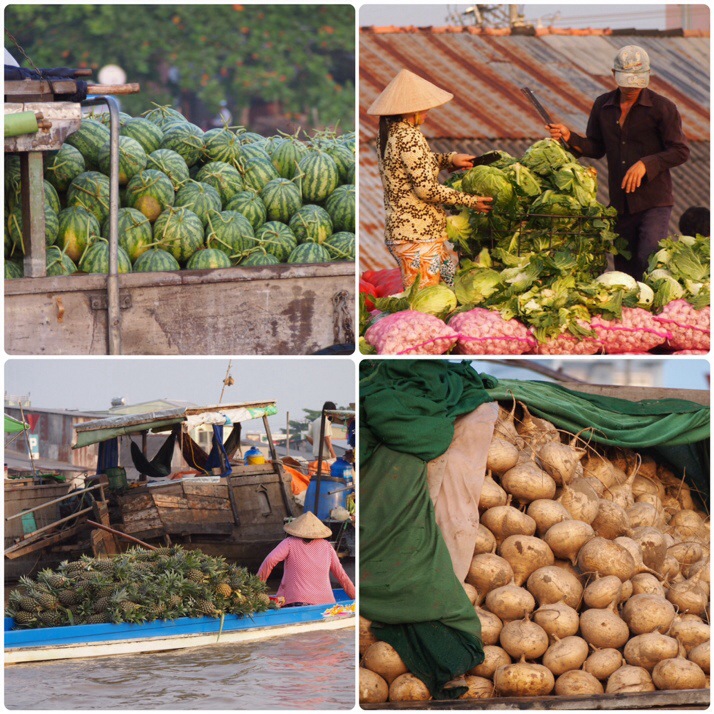 Lots of produce for sale. 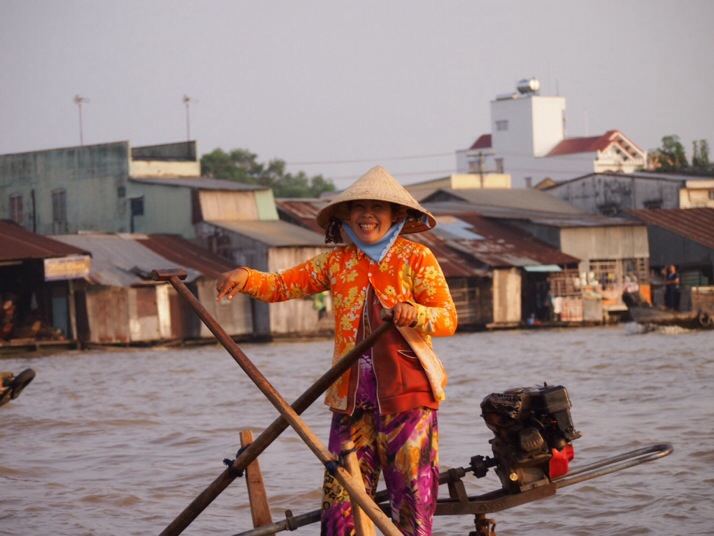 This lady was shopping with a huge grin on her face.

Nguyen Shack’s market tour also includes a visit to Cai Rang’s land market which, for me at least, was a much more interesting experience providing a real view into local life. It’s not just fruit and veg here but fish, meat, rice, flowers, pretty much anything a Vietnamese family might need. Not many (maybe not any) other tours visit this market so we got stared at a little bit, but that meant that people were pretty tolerant of, or maybe just bemused by, us getting in the way and taking photos of everything. Like the markets we visited in China, live fish were common. The vendors here seemed to prefer to dispatch them with a pair of scissors which seemed pretty brutal to us. Not quite as brutal as the tray of skinned frogs we saw though, after a few seconds we realised they were still alive (I’ll spare you the photos)… 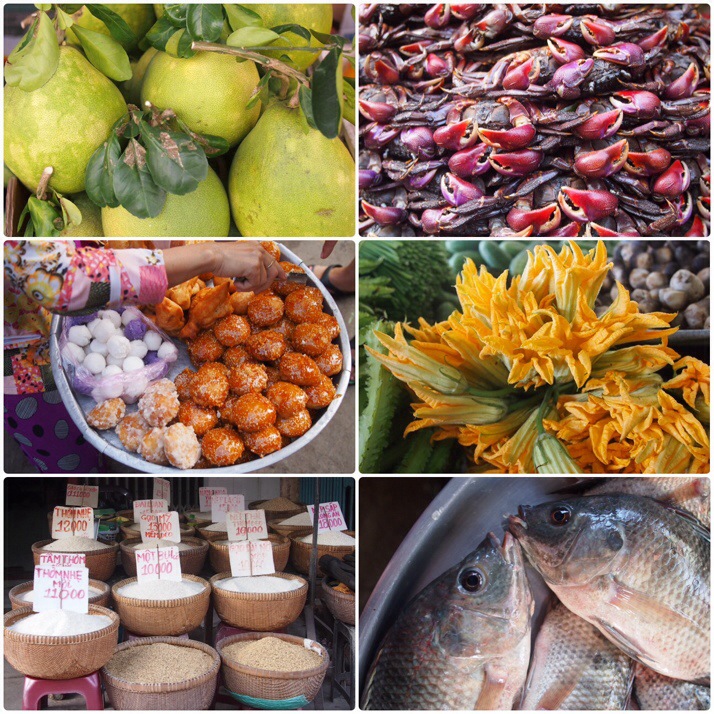 Pomelos (a kind of large grapefruit), crabs, sweet treats, courgette flowers, different types of rice, fish (I’m pretty sure these ones are dead) 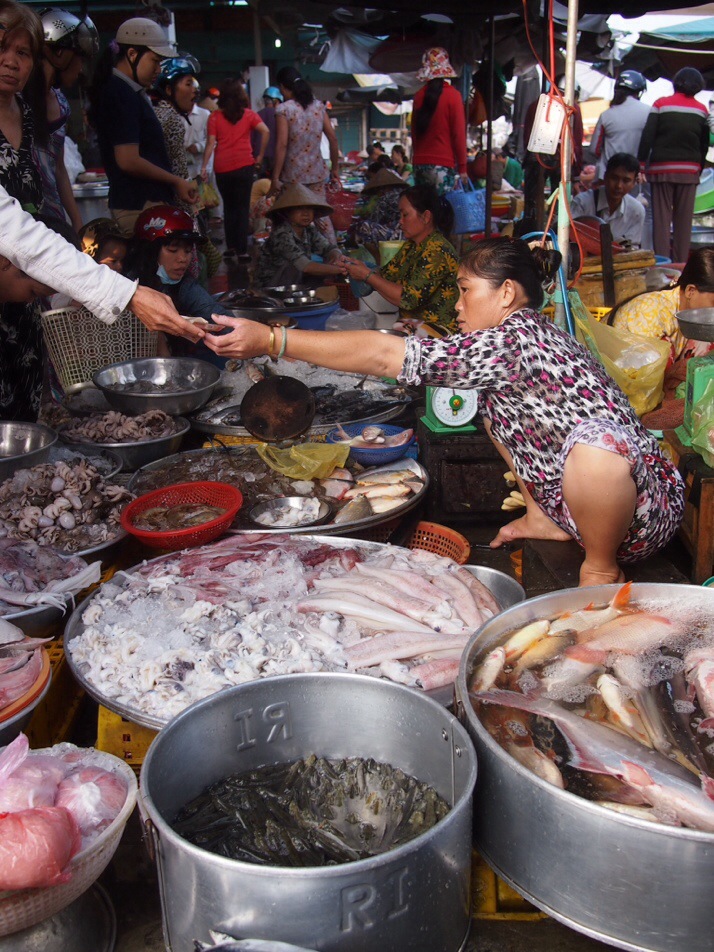 Transaction in the fish market

After breakfast back at the Shack we had planned to have a lazy morning and maybe a snooze but Maxime talked us into joining him and the American couple for a bicycling tour to see what local life is really about. He told us that this was his favourite of the three tours and that we wouldn’t regret it. He was right! We visited local tradesmen, factories and temples seeing a wide range of things that, as a tourist, you just don’t usually have access to. First stop was at the blacksmith working in a bamboo shack the way that blacksmiths have worked for years, the only concession to the modern age being automatic bellows to get the fire up to full heat. Next the small school, although holidays meant that there were no children there. Maxime explained that although school is compulsory it is not free and can often take up a sizeable portion of parents’ income especially if they have three or more kids. Blacksmith at work, Andrew on the cycle path, distillation equipment in the rice wine factory

The rice wine factory has been owned by the same family for generations. The ‘wine’ is actually more of a spirit undergoing fermentation and then distillation and coming out at around 50% abv. Not for the faint hearted but very smooth to drink (more so than good vodka). Next was the local pagoda, a Buddhist temple with a small community of nuns who also take in orphans. The rice factory was fascinating. Rice is delivered by barge into a large silo from where it is fed into the huge machine which removes the rice husks turning it from brown to white rice, sorts out any broken pieces and bags it ready for shipment. The rice is destined for export as well as local consumption – in 2012 Vietnam was the world’s second highest exporter of rice after India. Ceiling of the rice factory. This is why you should always wash your rice before cooking it…

When we visited the traditional medicine doctor’s shop, Maxime related how he had used the doctor’s services once in the past year. To make his diagnosis, the doctor asked him a couple of basic questions, took his pulse and looked at his tongue before telling him the problem which was the major reason for his visit as well as about other niggles that he had. The prescribed herbs were then tailored to treat everything. Payment is on the basis of what you can afford, so the doctor’s services are accessible to even the poorest in the community unlike the Western medical services. 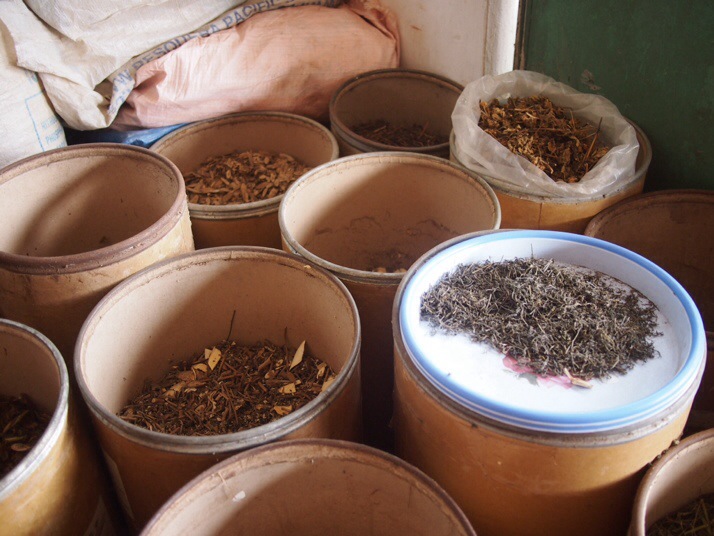 We got to have our rest in the afternoon, snoozing in hammocks in the Shack’s restaurant. In the evening Maxime and Theu invited some of their neighbours for food, rice wine and socialising. The rounds of downing shots of rice wine brought back fond memories of drinking vodka with Russian friends :). 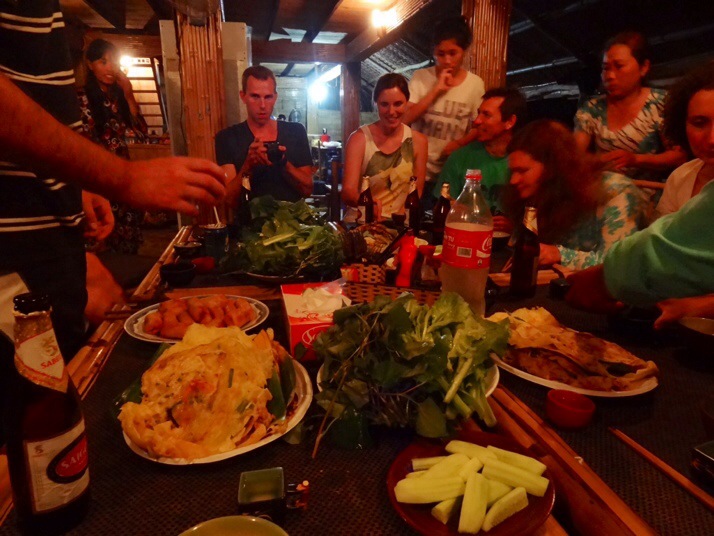 A feast to end a fantastic stay.

2 thoughts on “Rural Life in the Mekong Delta, Vietnam”