Cēsis is a billed as a lovely, archetypal Latvian town with a Medieval Castle and cobbled streets. We boarded the train from Sigulda at 11:47am, intending to spend an afternoon exploring its sights.

As it turned out, only one of us would make it.

At about 12:15, Julie says we’re near our stop, and we make our way to the end of the carriage as the train pulls into the little station. I stepped aside to let an elderly woman step onto the train, then hop off onto the platform. As I turn around, Julie isn’t behind me, as the woman had continued through to our carriage, and Julie had moved aside also – as Julie stepped out of the carriage the doors started to close and the train, not waiting for Julie or the doors, continued. 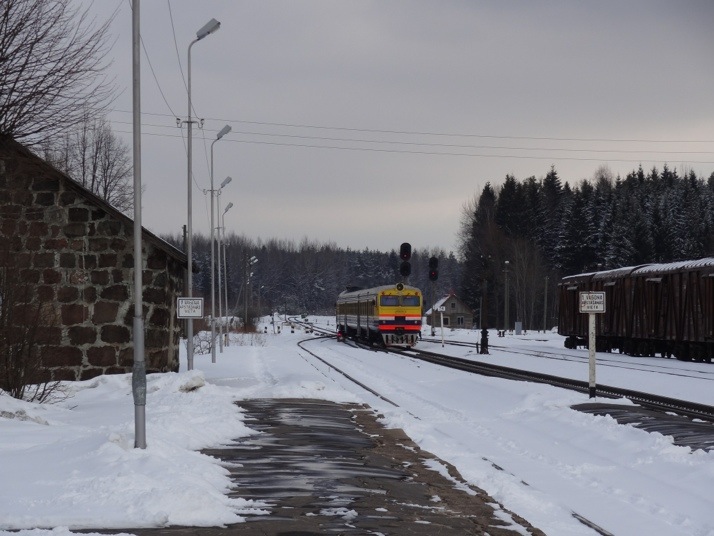 OK. No problem. I’ll wait in the station for Julie to catch the next return train to Cēsis, and we’ll continue our plans, just a little delayed.

I look at the station. It doesn’t say Cēsis. It says Ieriki.

Shit. I got off at the wrong stop.

No, wait – the train station at Jūrmala was called Majori, so this could still be Cēsis. OK, let’s scout it – the bus station should be the other side of the train station, and there should then be crossroads leading away from both towards the castle. The bus station looks like a car park and there aren’t any signs or stops visible. There are crossroads, but there are only houses on the corners, and the road away looks hardly used – there are no signs a bus has been down here.

Shit. I did get off at the wrong stop.

OK. Quick situation report. Cēsis can’t be but a few more minutes up the track, as we were just about to get off. I check the weather – midday, cloudy with bursts of sunlight. Good.
I’ve got a mobile phone, great, turn it on so Julie can reach me when she gets to Cēsis. I’ve got hiking boots on, warm clothing, a torch, penknife, lighter, small writing pad (which I could use to start kindling if needs), two packed lunches, 35Lats (about £30), a credit card, our hostel keys, and sunglasses. Great, put the sunglasses on so I don’t go snowblind.
The road parallel to the tracks veers off up ahead, so the best route is to follow the tracks themselves. 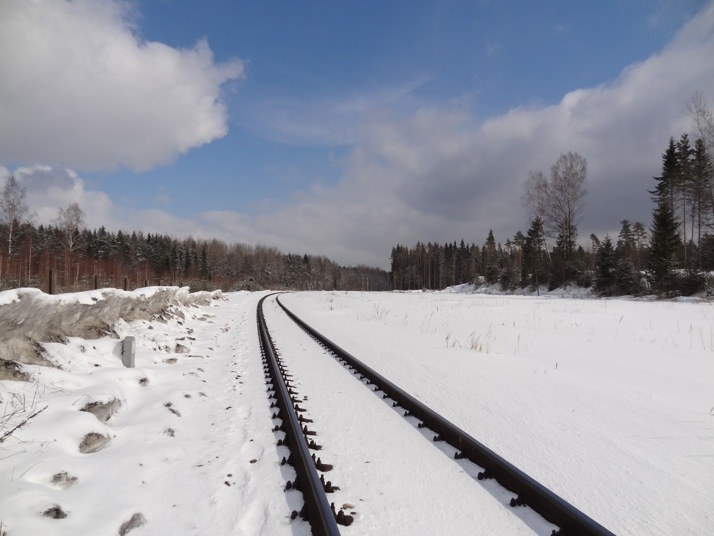 The snow is about toe deep, and uneven underfoot because of the railway stones, but I’m making good progress.

Round the first corner, 2km ahead there’s a building on the left that could be a platform.

It’s a small house set back from the tracks, the owner looks at me as I walk past – a wave is returned and he goes back inside. It’s a glorious day. I’m in the middle of nowhere, hiking trough a pine forrest in a National Park. Life is good. I reflect on the situation, and resolve to double-check before taking a course of action. I’m now thinking that was Cēsis, and I’ve headed off into the wilderness buoyed by my preparation and fondness for adventure.

Round another corner and I hear a train coming – I’d better get away from the tracks, so I head about 8 meters into the snow. It’s deep, thigh deep. After the freight train of oil drums and hoppers passes I make my way back up to the tracks, twisting my knee slightly in the process. This isn’t going to work if I’m injured. I winced the first couple of steps but I needn’t have, it was fine to walk on. Phew. I’ll see what’s round the next corner, and decide if I ought to turn back and wait for the next passenger train.

Next corner, no buildings. But there is a gantry with lights up ahead, and lots of railway signs – I see a car crossing the tracks up ahead – civilisation! 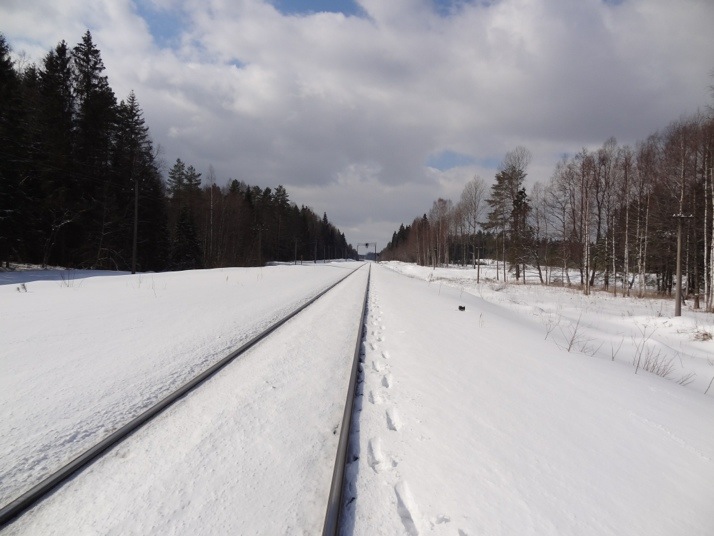 Just past the gantry I hear another train – this time it’s a passenger one coming towards me. As the banks are steep, I hot-foot it the 20 or so meters back to the gantry and hide from the snow-spray kicked up by the train by ducking behind the electrical cabinets. I wonder how dodgy I must look to the driver as I hide from the train.

Up ahead I see another car crossing the tracks. Perhaps there’s a village nearby? I spot a small
shelter set back to the right, it’s a station. Its name is Melturi. And there’s a granny-aged woman waiting for a train.

I say hello in Latvian, and read the timetables. Neither Cēsis or Sigulda are mentioned. I ask the granny “Cēsis?” and point down the tracks – first where I’ve come from, then further up the line. She gestures back the way I’ve come.

Shit. I got off at the right stop and Julie is likely on her way back there right now. Probably on the passenger train I just hid from.

Hang on, granny is waiting for a train, so I’ll wait for a train too. I sit down next to her. 5 minutes later and in perfect English, granny says “would you like to go to Cēsis?” Yes. Very much so I reply. She turns her little notebook to me where she’d written “autobus”, “2km” and “13:40”, above a cute little drawing of a bus. “Take this track 2km, there you can get a bus to Cēsis at 13:40.” I thanked her repeatedly in English and Latvian, and with 15 minutes to go, headed off once more between the pine trees. 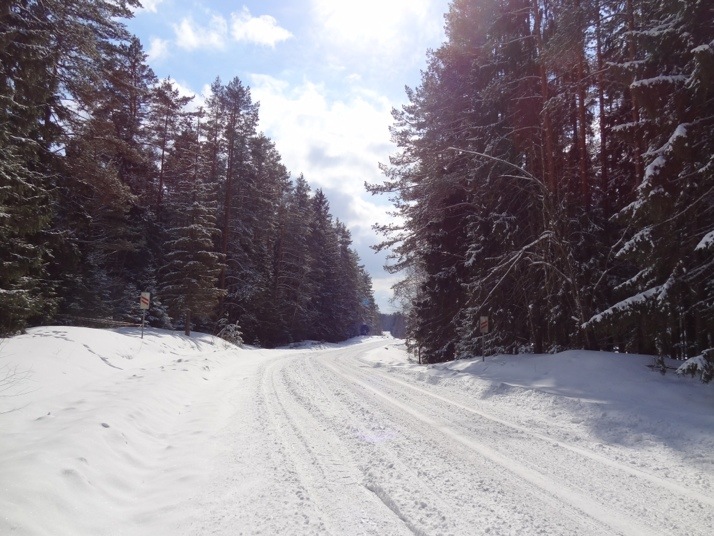 The track passed a hotel – I made a mental note in case I needed somewhere to stay or to call a taxi from – and ended at a very major road. As I’d walked east on the railway, and north on the track, I crossed the road and waited for the next bus that went west – back towards Cēsis. As I’d missed the 13:40 bus by a couple of minutes, I now had 70 minutes to wait.

Time for a sandwich. 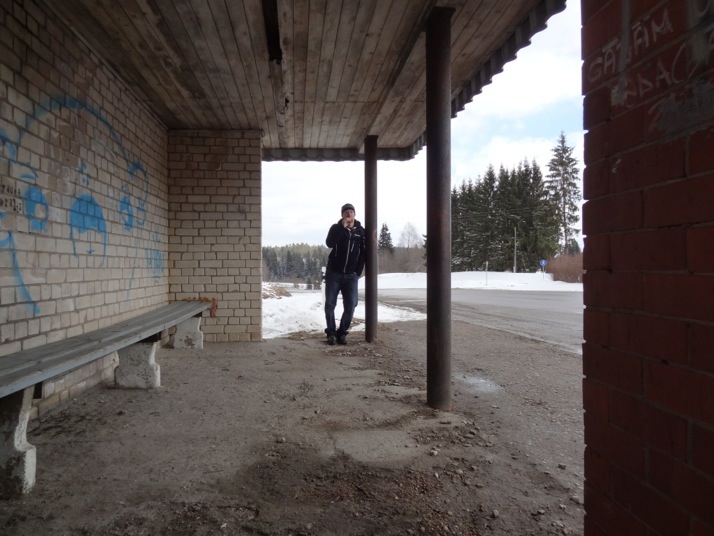 5 minutes later, a silver express bus to Cēsis & Rīga passed by but wouldn’t be flagged down. I’m at the right stop at least.

About 40 minutes later, a bus stopped and I asked for a ticket to Cēsis – the driver simply said “No” and shook his head. Confused that he mustn’t have liked to look of me, I got off. The bus clearly said “Cēsis, Sigulda, and Rīga” on the front. Weird.

10 minutes after that, another bus stopped. This time, as well as saying “No” and shaking his head, this driver pointed over the road to the opposite bus stop. Aha! But that doesn’t make any sense. Granny said Cēsis was west of here, not east. Maybe the bus route explains it. No sooner had I crossed the road, the proper Cēsis bus appeared.

The first sign I see from the bus reads “Cēsis 11km”. Holy shit, it’s miles away! It was a good decision to stop walking the railway lines.

At 15:10, 3 hours after we were separated, I arrive into Cēsis and the layout matches the map in my head and in the guidebook I’m carrying. First stop, the train station. 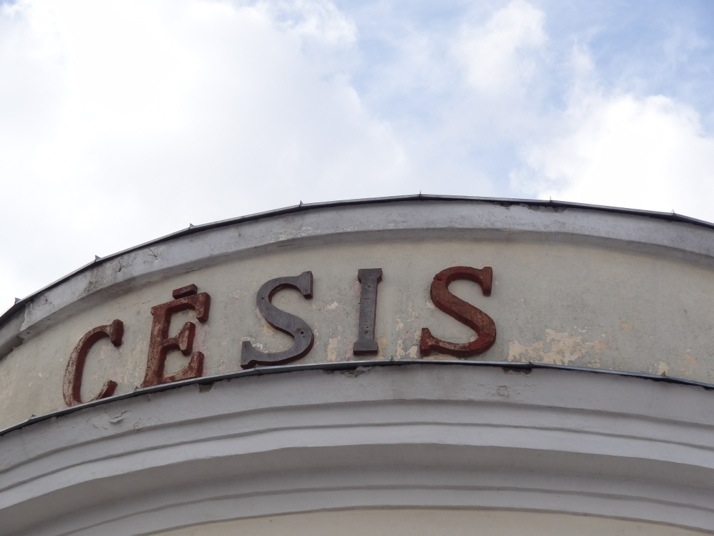 OK. I have the lunch so she’ll have been hungry – what about nearby cafe’s?

Checked all the bus stops, and the train station again. She’s not here. OK. What would she do. I’m 3 hours late, it’s a nice day, she’d likely have waited a couple of hours then gone to the castle.

So I went to the castle, hoping to see her on the way.

Got there. No Julie.

So I thought, well, I’m here, maybe she’s still inside, and I’d like to see it too, so I paid the entrance fee and walked around the castle and museum for an hour and a half, knowing that we’d planned to leave Cēsis at 17:10. Just as I’m buying my ticket for the bus back to Sigulda, my phone goes – it’s Julie. She’s safe. On arriving at Cēsis she couldn’t find a payphone to call me and had gone as far as the castle but not inside to look for one.

Figuring I’d do the same, she got the first bus back to Sigulda where we were staying.

Later reunited and over a couple of beers, we swapped our versions of the day. From her silver express bus home, Julie thought she caught a glimpse of someone that looked like me, eating a sandwich at a bus-stop.

We’ve talked about how we could have planned for such a situation in advance, but nothing really springs to mind. We reasoned that getting separated while en-route somewhere isn’t quite the same as getting lost.

Having a cheap mobile phone each would have saved us both some time, but wouldn’t have made for a good story.

What would you suggest?

8 thoughts on “Separated on the way to Cēsis”