The southern-most destination of our Armenian road trip was the once prosperous industrial town of Goris, still quite bustling but very much past its heyday. The long main streets with their two-storey houses with large wooden balconies stretching out over the pavement contrast with the functional concrete Soviet-era municipal buildings and residential apartment blocks. Everything has a partially abandoned shabbiness to it that’s quite endearing. 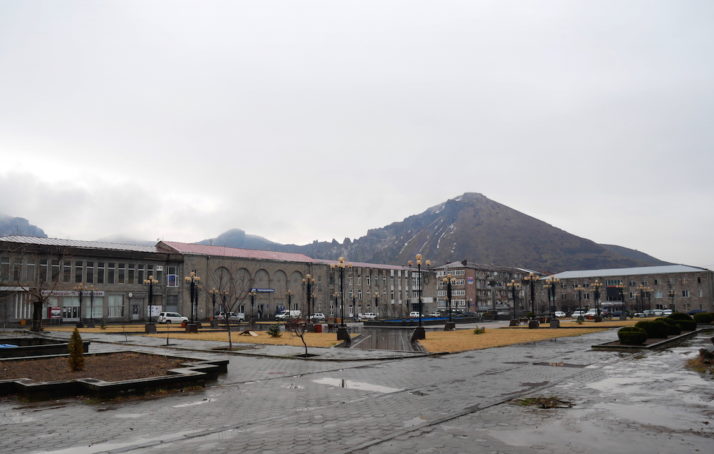 Goris’ central town square is quite grand. It’d be nice in the summer with all the fountains working

The main highway from Yerevan skirts the top of the town on its way to the Nagorno-Karabakh Republic and Iran further south (two more places to visit that we’ve added to our ever-expanding list!), but our reason for stopping in Goris was the nearby sights of Tatev Monastery and the cave settlement of Khndzoresk. Another monastery? We weren’t kidding when we said we thought every other site might be a monastery or church!

The journey to Tatev is a little more exciting than most as it involves a cable car. Somewhat ostentatiously called ‘The Wings of Tatev Aerial Tramway’, it’s in the Guinness Book of World Records as the longest non-stop double-track cable car – which makes it sound a lot more impressive that it actually is! However, all is forgiven for the views over the small village of Halidzor, the remains of a warning bell tower and the spectacular view of the monastery itself, perched on the edge of the plateau. 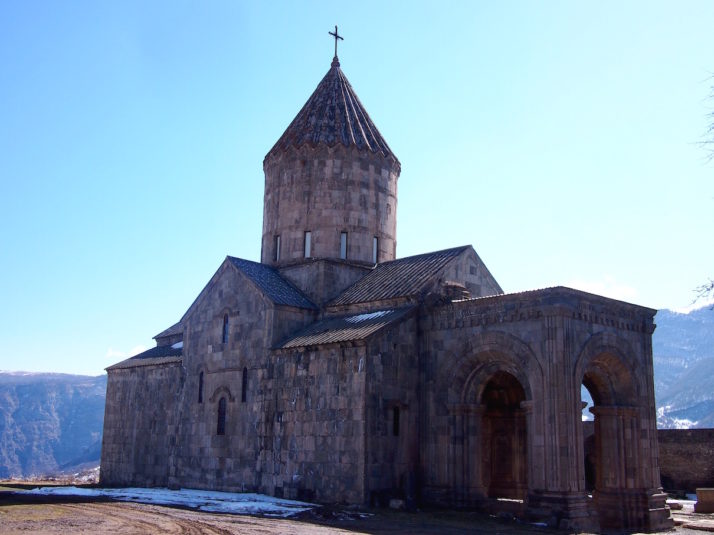 Although there was a small church on the site from the 4th century, Tatev grew into a thriving academic monastery after the main Surp Poghos-Petros (St Paul and St Peter) church was built in the 9th century to house important relics, and at its peak was home to some 1,000 clergy and students. 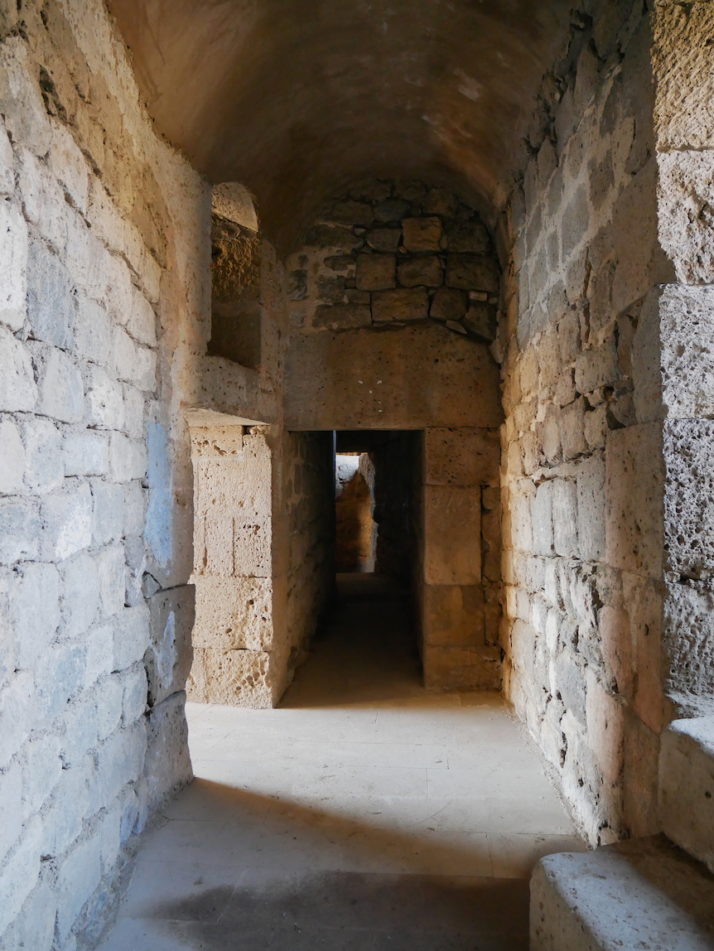 I enjoyed exploring the old monk cells more than Julie did!

When we visited in March 2017 the restoration works were well underway and we read that the intention is to restore Tatev to a working monastic university which will include an interactive museum. I hope it’ll still be possible to visit some of the monk’s cells in the outer walls that look down the valley as we enjoyed exploring the rabbit-warren of interconnected rooms. 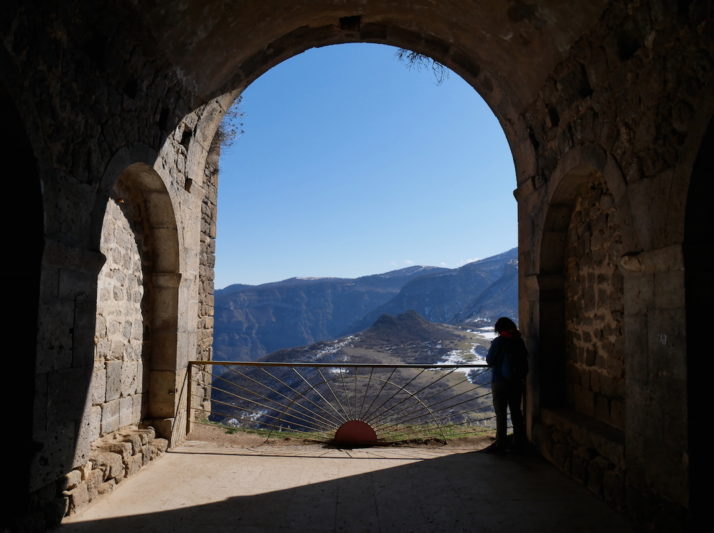 The view from the monk cells down the valley. Apparently there’s a tunnel carved into the hillside to the valley below!

The other highlight of Tatev for us was the huge communal oil press sited just outside the monastery so the nearby villagers could use it without disturbing the monks. At first glance we thought the giant screw end did the pressing but a video showed us that we had it the wrong way round – the sacks of seeds sit under the other end of the long wooden beams, and the screw end is used to control the compression. 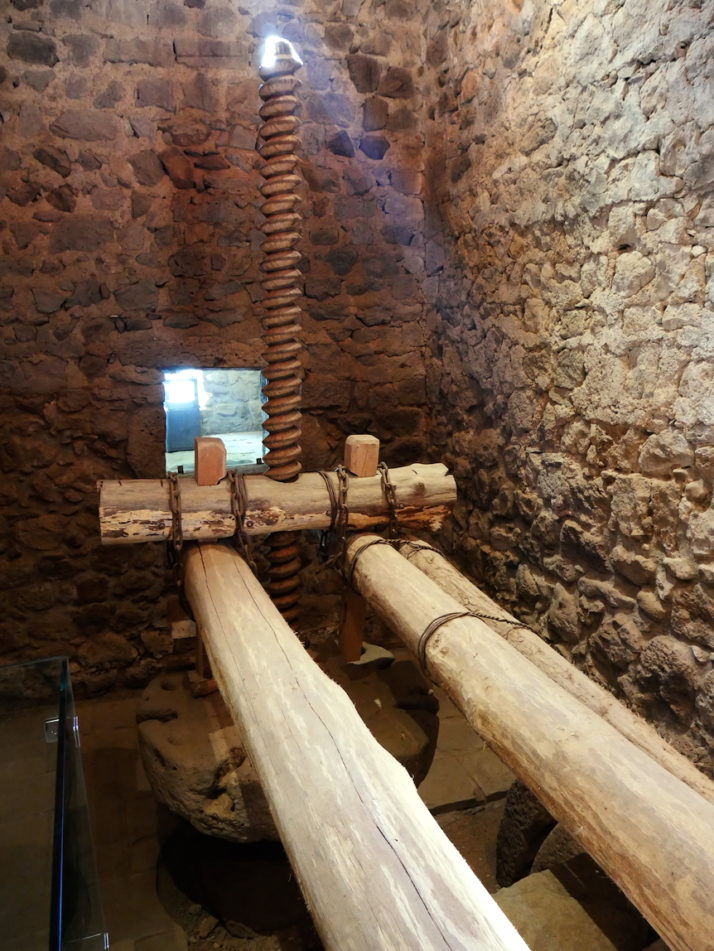 Oil presses were common in monasteries all around Armenia, but Tatev’s has been reconstructed to show how they worked

Having taken the cable car to Tatev we decided to hike the 9 miles (15km) back which meant we could visit Tatevi Mets Anapat (Tatev Hermitage) and the Devil’s Bridge both located in the valley below. After a spot of lunch on the outskirts of Tatev village, we were adopted by our requisite tour guide dog whom we named Grigor and set off on the well trodden trail down the hillside. Have pooch, will hike. It’s worth mentioning that the offline maps.me app was very helpful hiking down from Tatev Monastery as there are a few forks in the track and very few markers 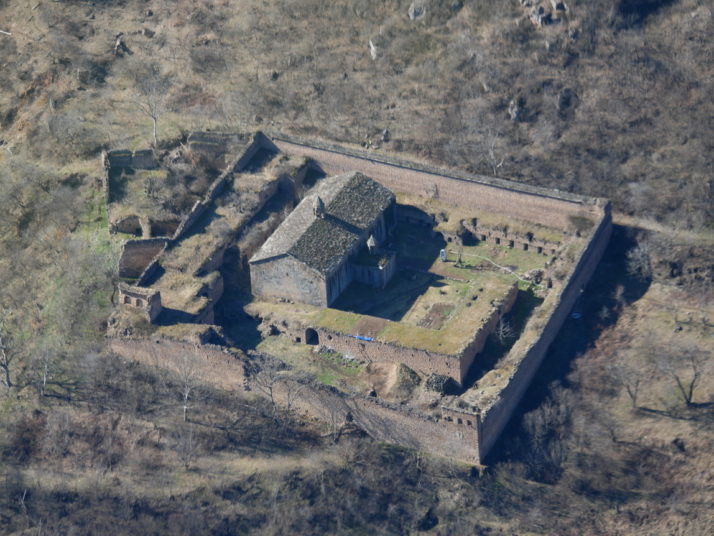 The Tatev Hermitage viewed from the cable car

Concerned that we were running a little short of time to make it back to the car park before it closed at 6pm, we gave ourselves 20 minutes to poke around the ruined hermitage of Tatev and that was plenty of time, though I still couldn’t find the tunnel that apparently links it with the monastery we’d hiked from! 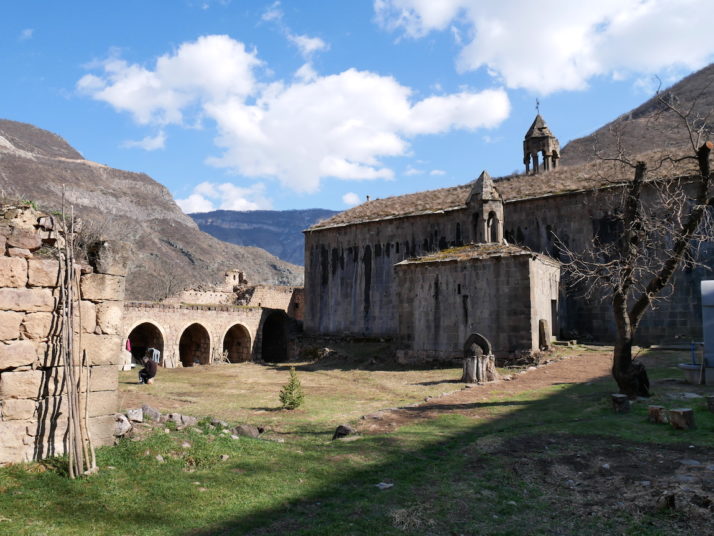 Inside the Tatev Hermitage, complete with a hermit! We offered him a biscuit but he politely declined The Devil’s Bridge, also known as Satan’s Bridge, is a naturally created, 50m wide bridge spanning the river at the bottom of the valley

Filling up our water bottles from the natural spring at the Devil’s Bridge gave us two surprises: firstly, the tepid sulphuric taste was a bit of a shock to our hiker’s thirst and we were re-united with Grigor! He’d gone walkabout as we’d left him outside while we were in the hermitage and he was delighted as only dogs can be when they see you again! 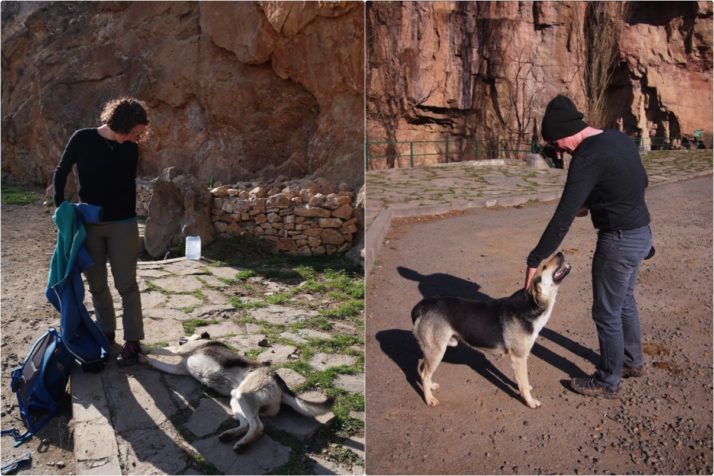 By now it was getting on for 4pm and we were both getting a little anxious about making it back in time to retrieve the hire car. We had 2 hours to hike 6 miles (9km) up the switchback valley road which was doable, but it would be close! After about 3 quarters of an hour we spotted some cars going our way and we were able to flag one of them down. As we set off with the 2 reserved Armenians in the front of their luxurious 4×4 we realised how far 6 miles is and were very thankful they had stopped for us!

The old cave settlement of Khndzoresk, all of those black dots are dwellings or storehouses

Old Khndzoresk is a large abandoned village of cave dwellings cut into the steep valley walls. The information board at the entrance said that at its peak in the early 20th century it comprised 9 districts, 1800 homes, 7 schools, shops, and workshops. We reckoned that meant the population would have been over 7,000! The caves are reached by a 160 metre suspension bridge that was hand-made by the locals to encourage tourism. They’re very proud that no heavy machinery was used! 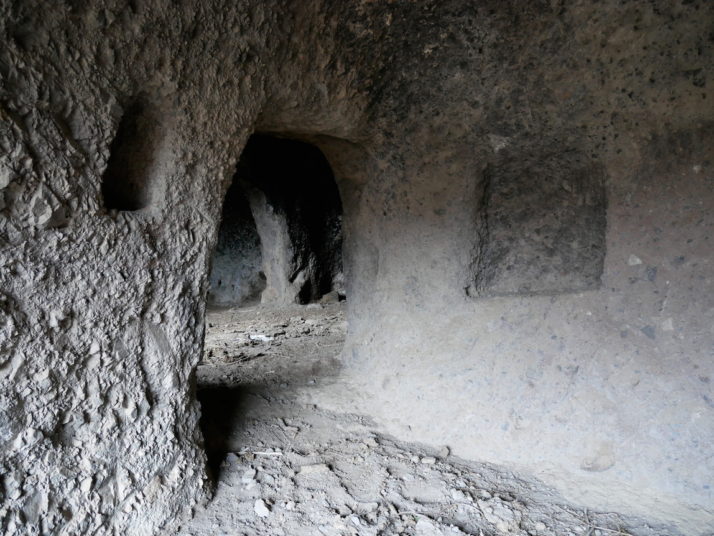 A lot of the caves were simple one-room dug outs, but some had corridors and doorways to larger rooms deeper into the rock we assumed would have been for storage 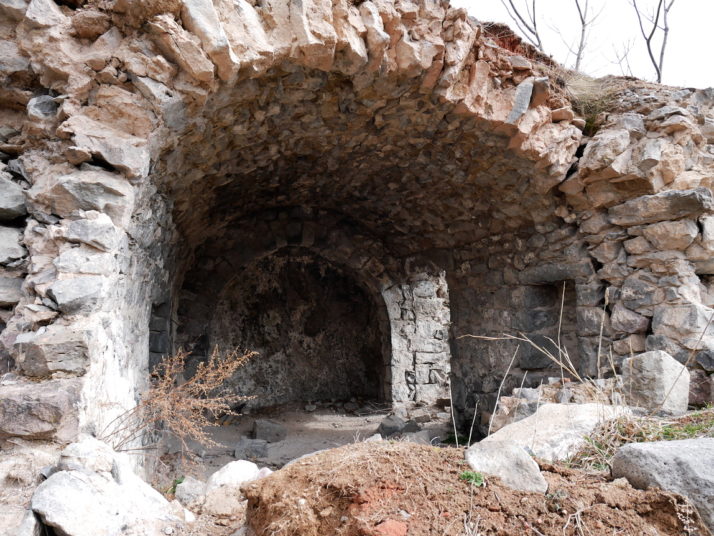 While the higher caves were used for storage and reached by rope ladders, the lower caves were often extended with porches that doubled as yards or gardens for the caves directly above them 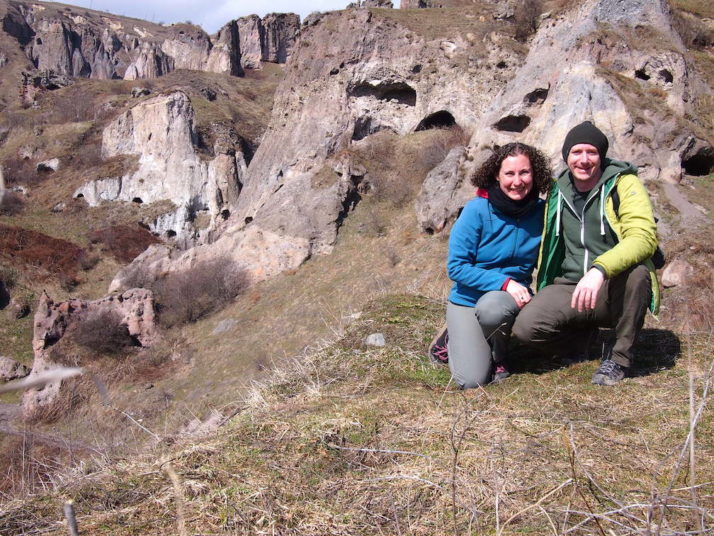 We took a little picnic with us and really enjoyed spending the day exploring the caves.

4 thoughts on “Southern Armenia – Goris and around”