We’ve been using Airbnb to find accommodation on and off throughout the trip and it’s been especially useful for finding apartment rentals for a few weeks as it’s really nice to have a kitchen and a bit more space than the average hotel room. Another option is to rent someone’s spare room, which at its best is basically living with locals in a local neighbourhood. This is what we opted for in Daegu and we felt like we’d struck gold staying with lovely Gabby and Andrew. On our final evening we all had takeaway fried chicken and beers sitting in their living room watching Korean soap operas – it doesn’t get much more homely than that!

July is the rainy season in Korea and we’ve sometimes had to juggle our plans a liitle to better suit the weather. On our first day in Daegu, the forecast was for a cloudy day but with no rain so we set out on the hour long bus ride north from Daegu to the Palgongsan Provincial Park and the fairly short but steep hike to Gatbawi shrine. The mountains were shrouded in clouds when we arrived and rain seemed inevitable but we’d come too far to turn back now and anyway I had an umbrella and Andrew had his hat, we’d be fine… 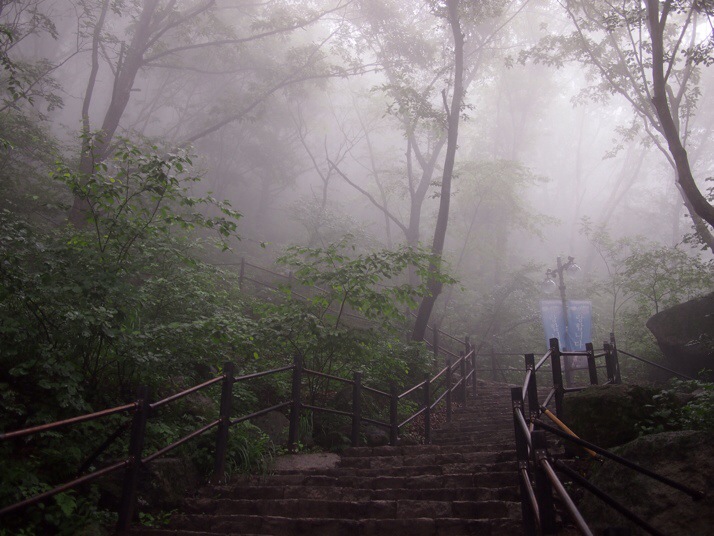 Very cloudy path up through the forest

Halfway up the hill there was a heavy shower which we were able to shelter from in a rest pavillion before continuing upwards through the damp air and dripping trees. The stairs were unrelenting with no flat sections at all but it wasn’t far really and we soon arrived at the shrine. The Buddha statue is carved from a single piece of stone and its official name is ‘Stone Seated Medicine Buddha’, but he is popularly called ‘Gatbawi’ which means ’Buddha of the Stone Gat’ (the traditional wide brimmed Korean hat) referring to his very obvious headgear. 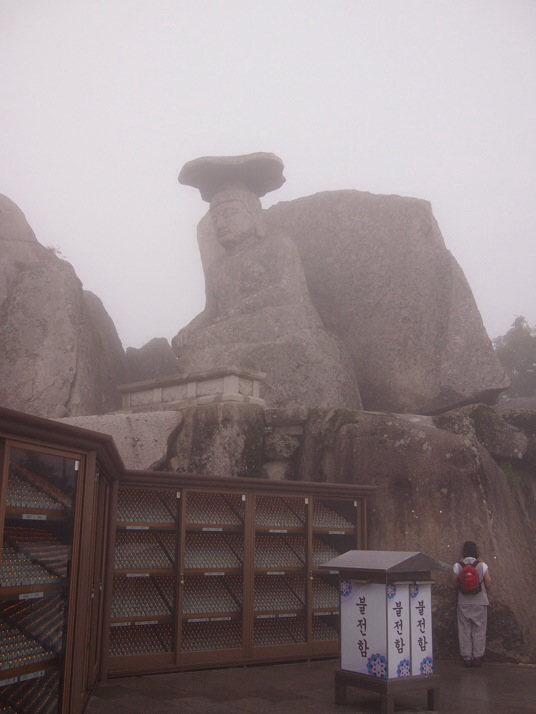 Lady praying next to Gatbawi Buddha 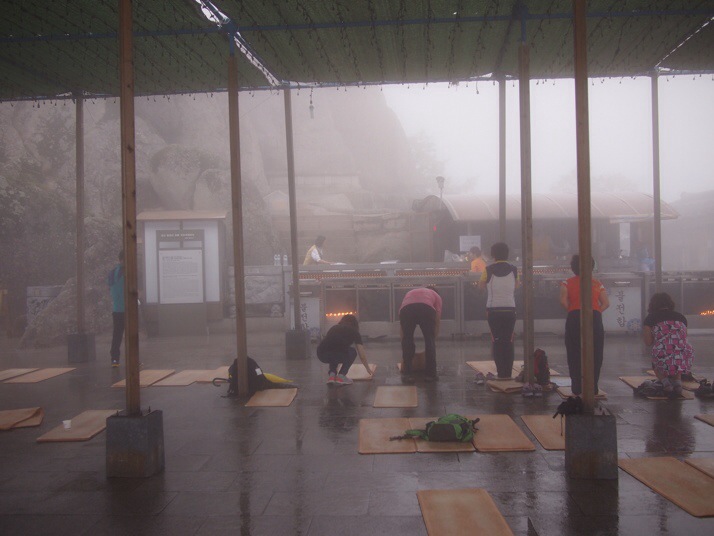 The area around the statue is set up for the devout rather than for tourists with piped monk chants coming from speakers and stacks of mats which Koreans use when bowing, a kind of meditative humbling process to bring them closer to the Buddha Nature

The view might have been fabulous but all we could see was cloud and then it started to rain again. This time it was more than just a shower and the tarpaulin over the bowing area wasn’t really keeping the wet out anyway so we decided to head back down the hill. The Lonely Planet said there were two routes between the bus stop and the shrine, we opted for the non-step route for our return. It wasn’t any easier going, if anything it was harder as the path was sometimes rocky and slippy in the wet which required more care than the reasonably regular steps. 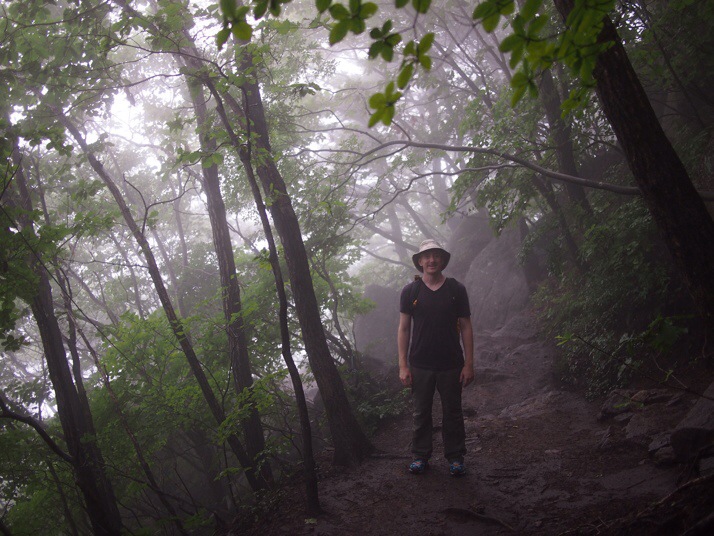 Andrew on the downward trail

Eventually we reached a crossroads with signs pointing off to different temples in each direction. The name of the one off to the left rang a bell, but that made no sense at all so by mutual agreement we set off on the path heading down the mountain. Of course, what we should have done was consult the photo of the trail that we took at the bottom of the hill and match up the Korean symbols with the sign, but it was raining, we were wet and trying to juggle camera and umbrella without getting more wet was too difficult so we just set off plodding downhill. 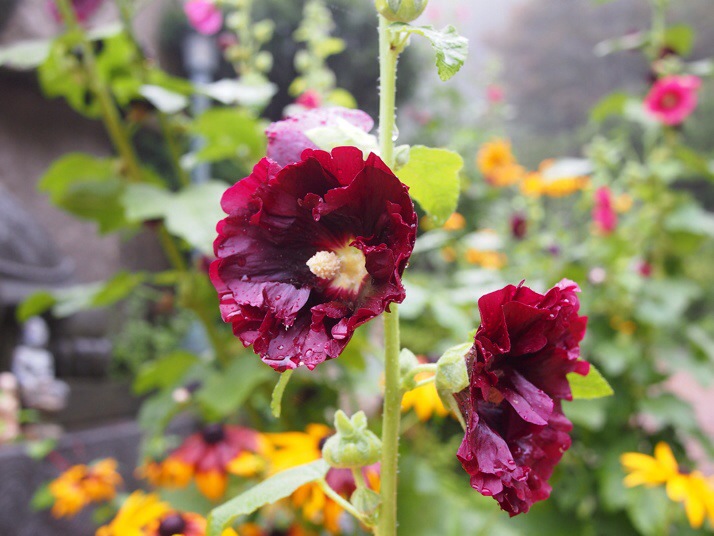 Hollyhock in the rain

After a while we rounded a corner to arrive at a car park and (closed) information point. It was clear that we were in entirely the wrong place and to make matters worse, the trails marked on the map in the car park, the photo we’d taken of the map at the bus stop and our memory of the crossroads didn’t tally up at all. We ate our lunch on a wet seat before trudging back up the hill to the last temple we’d passed to see if we could work out how to cross the ridge. Fortunately the rain had more or less stopped and it didn’t take long to arrive at the seemingly deserted Yongjuam temple. 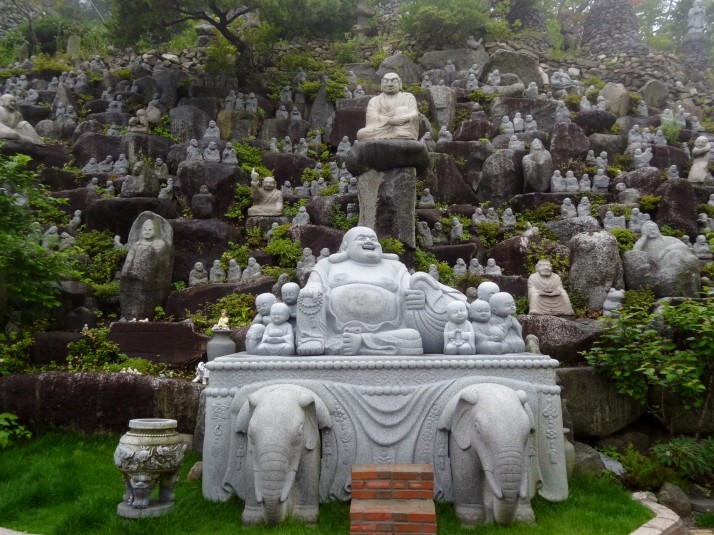 Dozens of Buddha statues at the entrance to Yongjuam Temple

After admiring the bell and ruing the lack of view due to the still massed clouds we thought to pass by the main hall in search of a trail down the other side; cue very loud barking dogs who obviously were not keen on letting us past. At last a groundskeeper appeared, shouted at the dogs and pointed out the trail to Gwanamsa temple from where we could pick up the original path down to the bus stop. 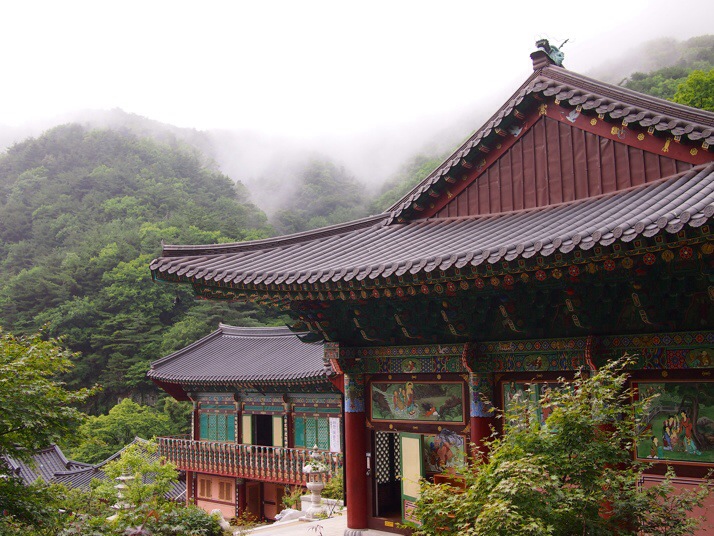 We were very glad to spot Gwanamsa temple at last!

The supposed two hour round trip hike took us more than four hours, it’s a good thing we didn’t need to be anywhere else that afternoon!

On our final day, we spent the morning chilling in a traditional Korean bathhouse before meeting Gabby for lunch at Seomun Market. She took us to “the best” food stall to sample tteokbokki, noodles and pancakes. After the delicious lunch we wandered through some of the stalls. Saturday afternoon is probably the busiest time of the week and it was packed. I was surprised that many of the clothes shops had an almost boutique look to them, much more upmarket than the clothes usually for sale in markets in England. 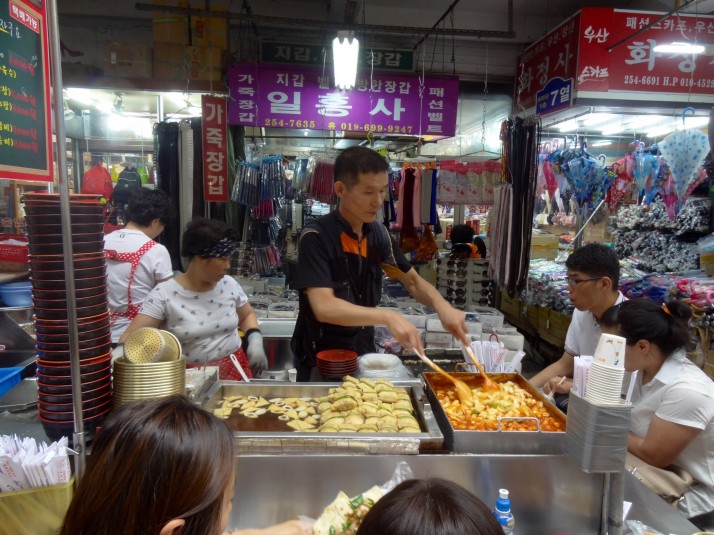 Daegu is well known in Korea for its traditional medicine market. This dates back to the 17th century when the king decreed that a medicine market should be set up there. It wasn’t quite what we expected. I thought it would be a big covered hall with shops and stalls (like a regular market) but it’s actually a couple of streets in the city centre which are lined with shops selling herbs and offering traditional medical services such as acupuncture.

A look through one of the shop’s doorways. The large glass jars contain ginseng, a vital ingredient in many Korean herbal remedies. 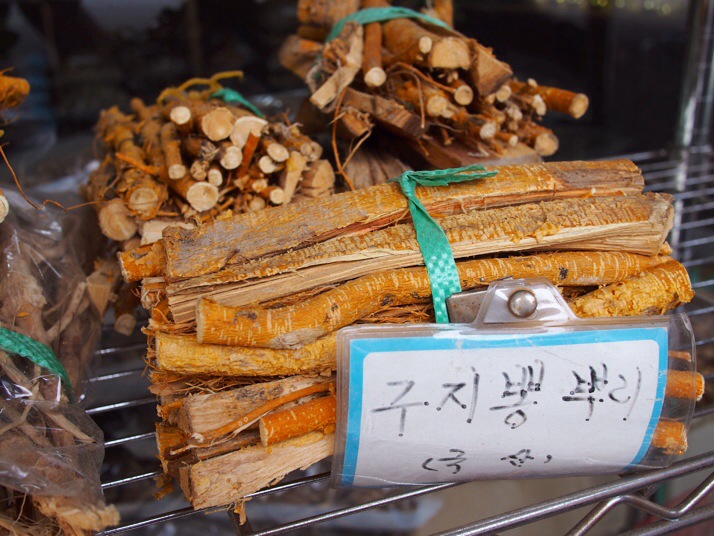 Yangneongsi Oriental Medicine Museum is just off the market’s main street. It is nicely set up but has essentially no English signage so the friendly lady on reception gave us a tour in broken English. It begins with a few dioramas showing the history of the area, followed by an overview of the different plants (and animals) used in the remedies, and some scary looking acupuncture needles. On the lower floor was an interactive space where quiz machines would work out which of the four body types you are, and we learnt how to make remedies, as well as being able to try a small cup of herbal medicine tea (quite tasty!) and try on a traditional hanbok. 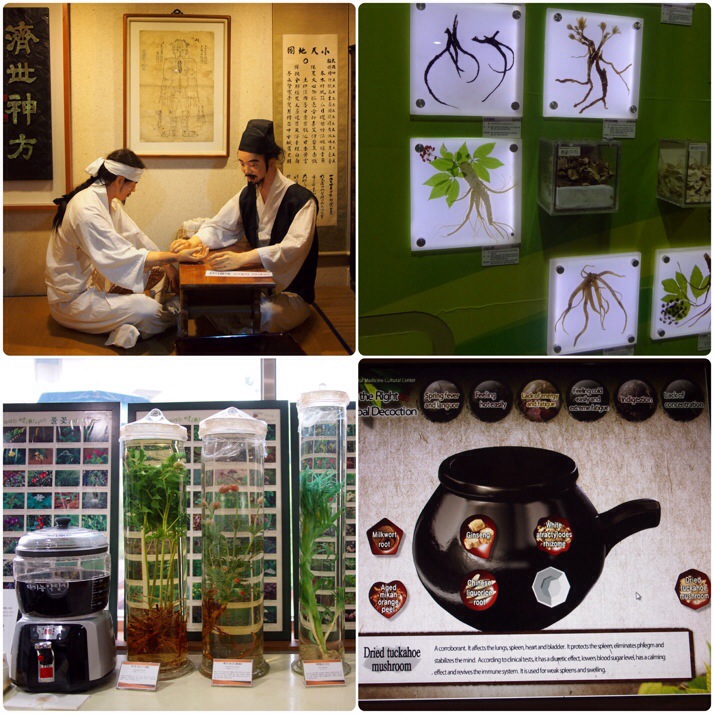 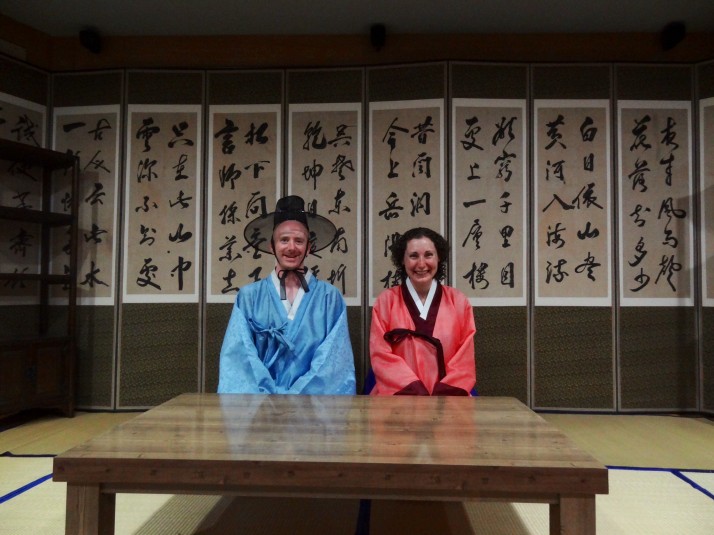 Us in traditional Korean hanbok. It’s unclear what link this has to traditional medicine but it was a fun activity. The hat Andrew is wearing is the ‘gat’ which the Gatbawi Buddha is named after.