All told, we’ve spent about a fortnight in the capital of China and we love it. It’s one of those places that we immediately felt both at home in, and very safe in. The locals feel safe too – after yet another delicious Peking Duck and a few beers, this time with our friends Maxime and Armelle, Julie and I were walking back to our hostel at about midnight and a 20-something girl in front of us was nonchalantly spinning her purse in one hand.

Beijing is our kind of town; there is plenty to see and do, and getting around is almost effortless and very cheap. I say almost because finding a destination bus stop is a bit tricky as they’re only in English on the bus company’s route planning website but they’re only in Chinese on all the maps!

Here are our highlights of what may well be our favourite city of the trip so far..

Tian’anmen Square and the Forbidden City

The central public space in Beijing, and the seat of Imperial Power. Two days and we still didn’t see it all!

Beijing was our base to explore The Great Wall at Jinshanling.

Olympic Park and the Air Corridor 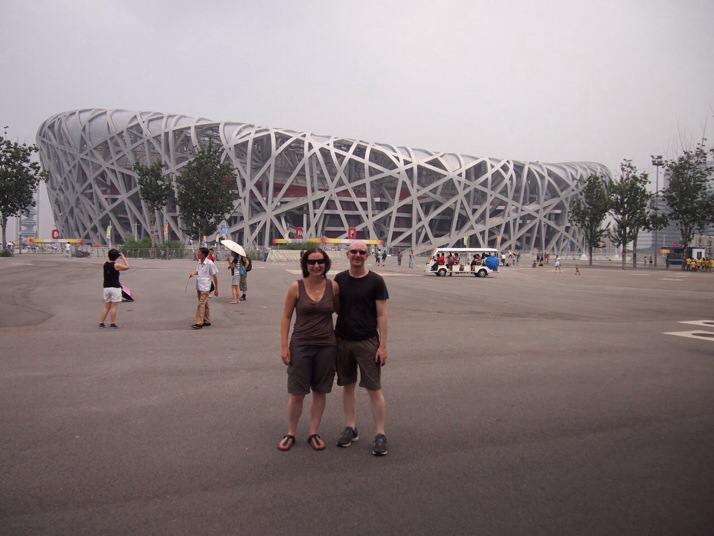 Us at the Olympic Park! Outside the Bird’s Nest Stadium! (and yes, the exclamation marks are warranted!!)

A gloomy day in Beijing couldn’t stifle my excitement at visiting the site of the 2008 Olympics – surely you remember the amazing fireworks display.. 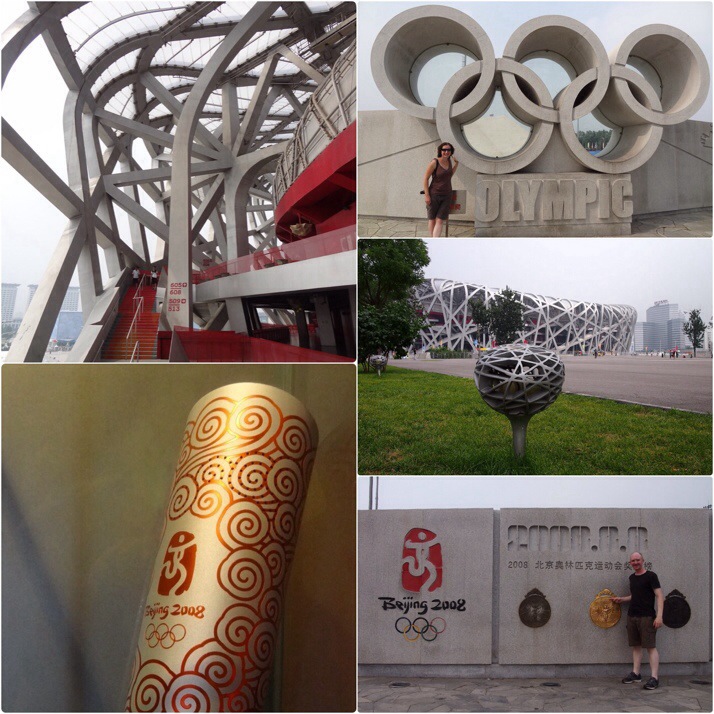 Clockwise from top-left: Inside the Bird’s Nest stadium; Julie in front of the medals wall – Olympic results engraved to the left, Paralympic to the right; Nice attention to detail – the floor lights are in the style of the stadium; Andrew going for gold; The 2008 Olympic torch

Not only did we get to go inside the Olympic stadium, but for a small extra fee (which I was able to talk Julie into!), we got to go onto the roof. Bizarrely named the “Air Corridor”, it’s a small walkway that takes you to where the massive Olympic torch was unveiled – with spectacular views over the rest of the park and down into the stadium itself. 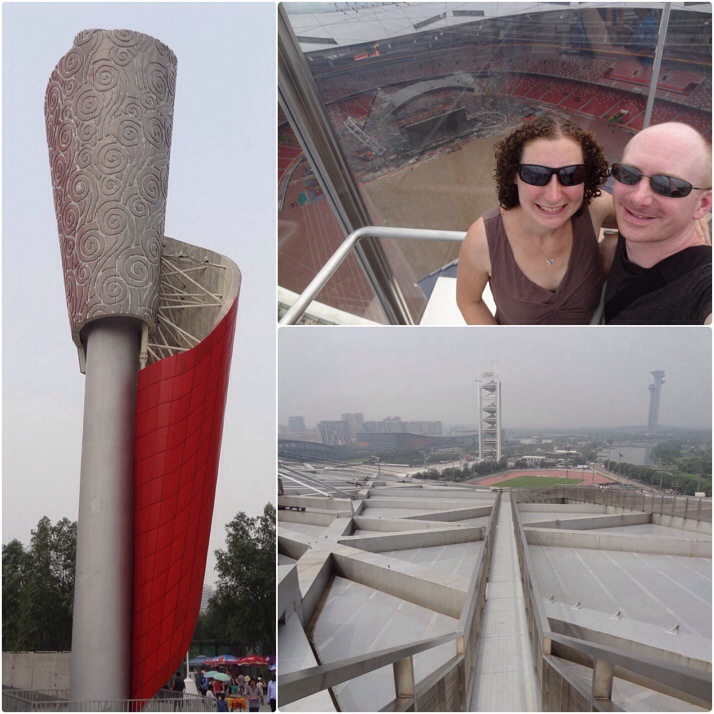 Clockwise from top-right: Us in the Air Corridor, looking down into the Bird’s Nest stadium; the Air Corridor – it’s a corridor in the open air. I think I get it; The massive Olympic torch that is now sited next to the stadium instead of on top of it.

We visited the park a second time with Julie’s parents Norman & Moira, but this time we waited until it was dark so we could see it all lit up.. 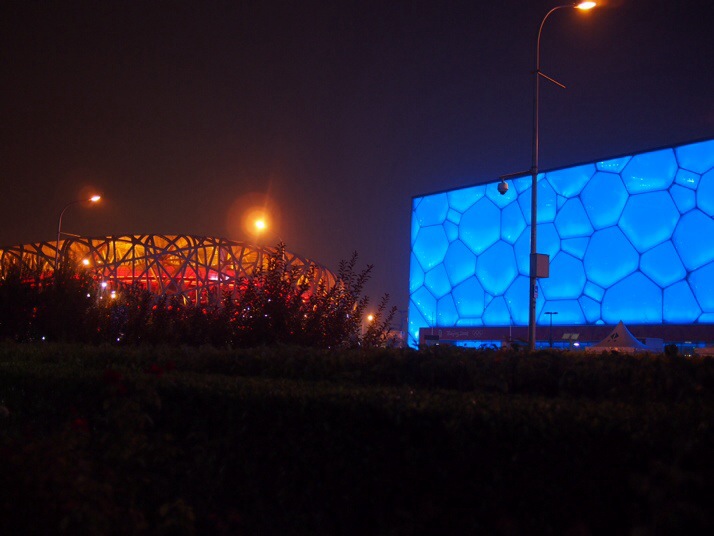 One of Moira’s favourite places that we visited, the Temple of Heaven is a series of temples previously used by Emperors to pray for good harvests, set in a lovely spacious park. 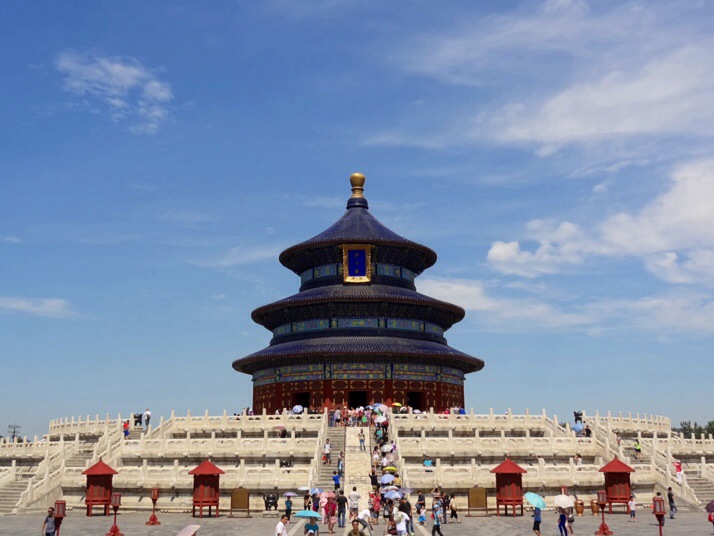 The Temple of Heaven is characterised by beautiful circular temples, like the Hall of Prayer for Good Harvests 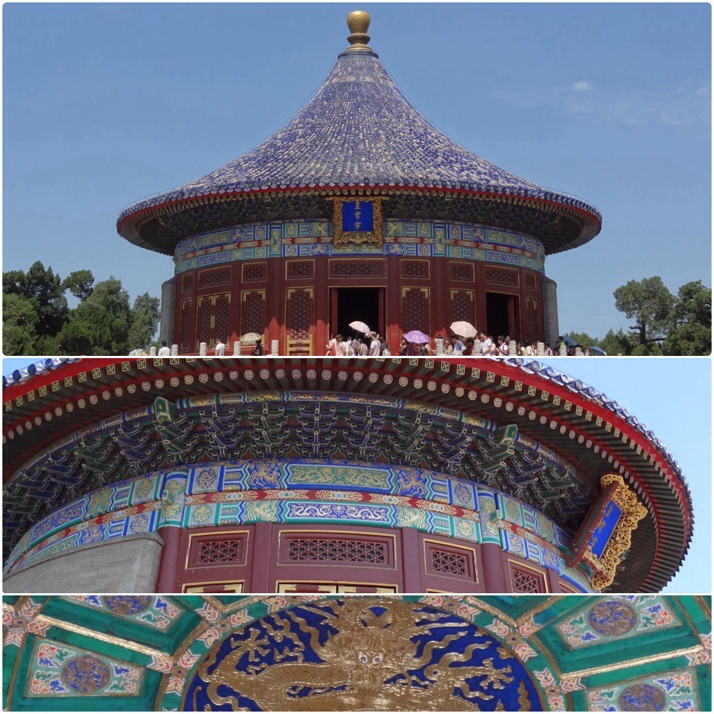 The Imperial Vault of Heaven; Roof detail and ceiling dragon 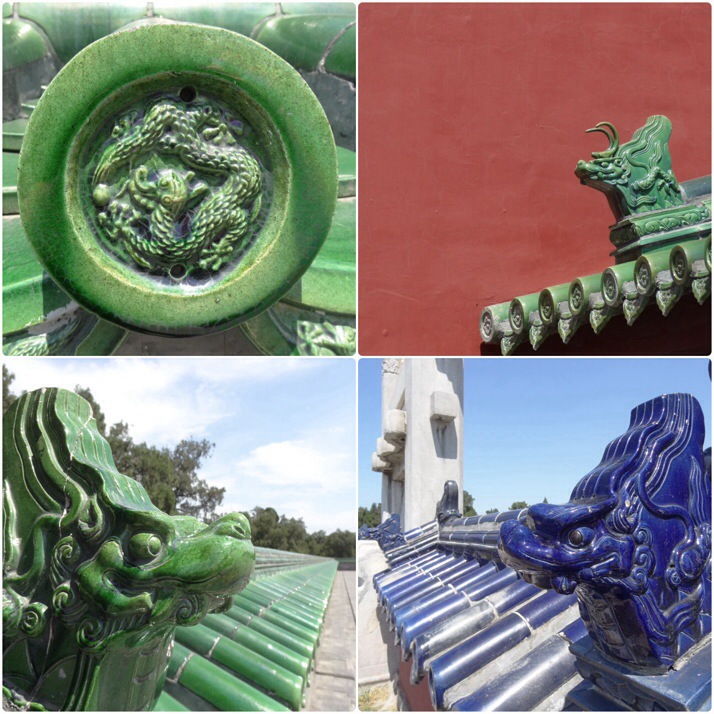 The Summer Palace isn’t so much a palace as a giant park, and its name in Chinese literally translates into “Gardens of Nurtured Harmony”. Our friends Isaac & Rebecca say they try to visit once a week, but I secretly wondered how a park could hold that much interest. Don’t get me wrong, I like parks and the outdoors – I was raised walking on hills – but every week?

The walk from the East Gate to The Garden of Harmonious Pleasures takes in a nice up-and-down meandering tree-lined pathway. So far, so good.. 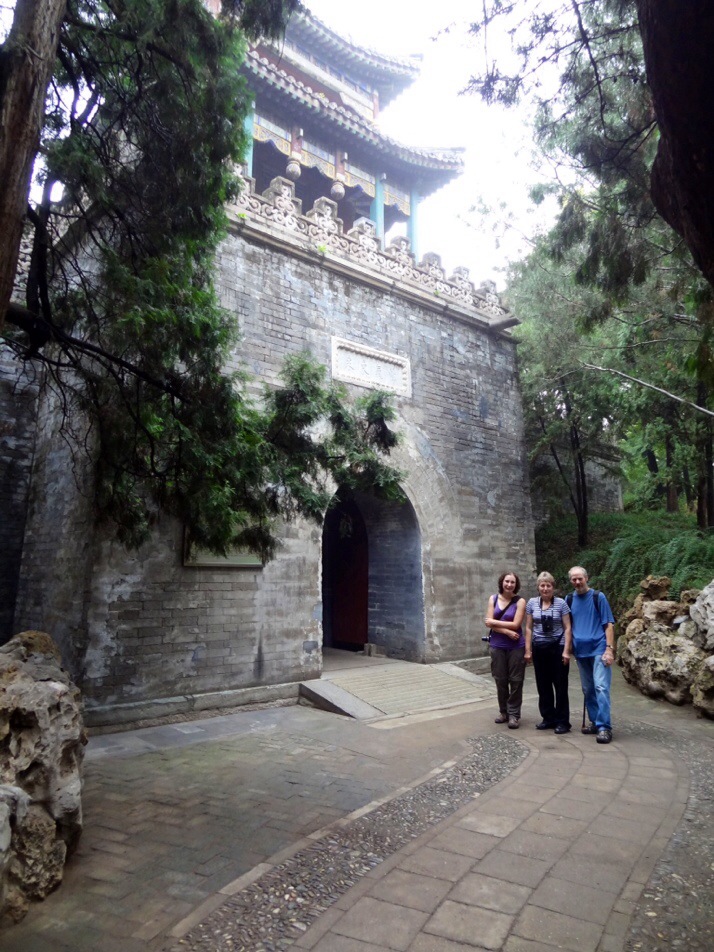 Julie, Moira and Norman at a gate on the path to The Garden of Harmonious Pleasures 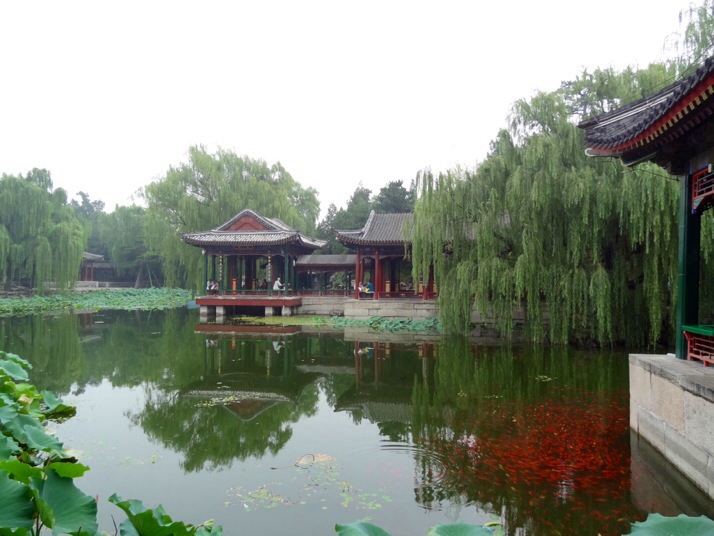 The Garden of Harmonious Pleasures. I could sit here all day

I mentioned earlier that I like parks, but I sat here and just looked out over the pond with the moving shoals of golden Koi and the pattern of rain on the waters surface and realised that I actually love parks. I decided that there would be more parks in my life from now on. And now I understand why Isaac & Rebecca visit every week.

As we’d bought the “access all areas” ticket, we made our way to the Court of Virtuous Harmony, and we’d timed it perfectly for the Chinese variety performance and the onset of the rain. Fortunately the rain was light and the performance of dance and music all but outlasted it. 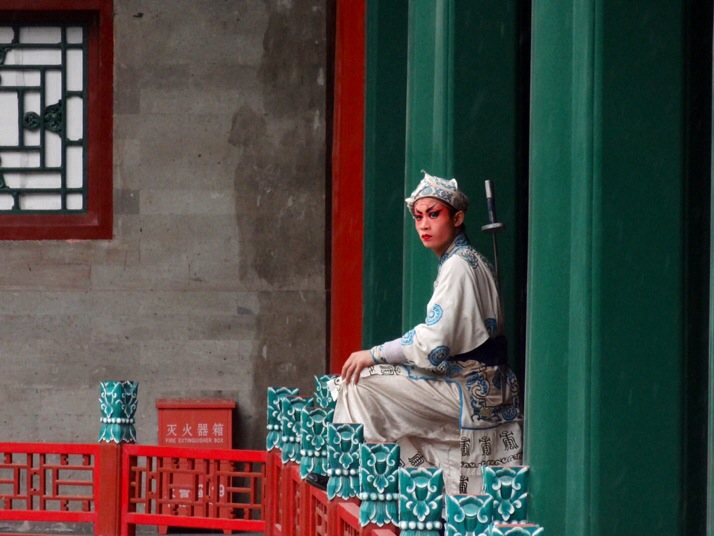 Martial Arts performer before he takes the stage

The centrepiece of the Summer Palace is the Temple of Buddhist Virtue, which takes quite a climb to reach. 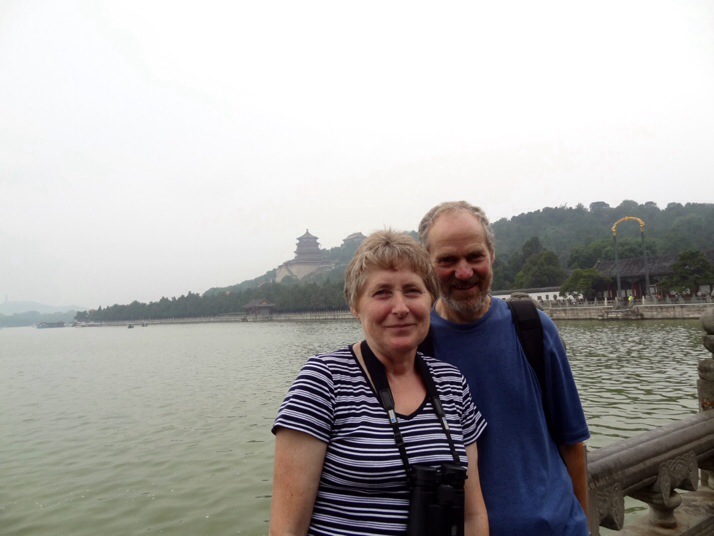 Moira & Norman with the Temple of Buddhist Virtue behind them. That’s where we’re going next! 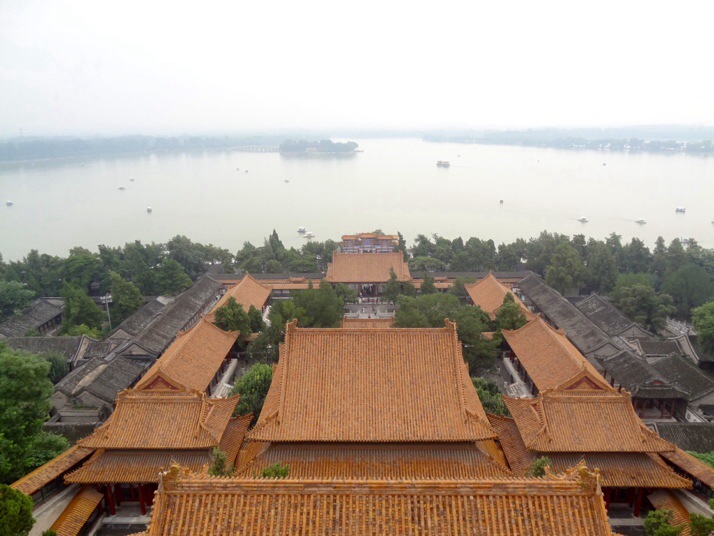 View from the Temple of Buddhist Virtue over Kunming Lake

We left the Summer Palace from the North Palace gate that turned out to be closer to the Metro station than the East entrance we walked to. On the way, we dropped below a footbridge into Suzhou Street which looked intriguingly like Venice from above.. 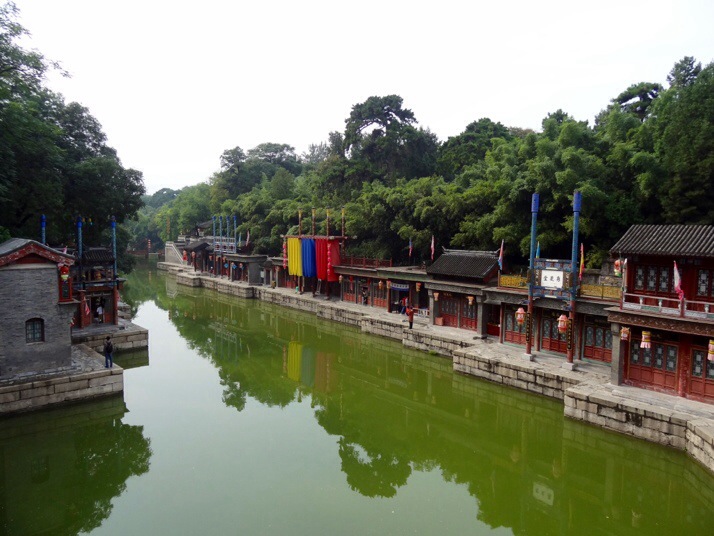