We’d heard from fellow travellers and recent TripAdvisor reviews that Himeji’s main attraction and a highlight of Japan – the magnificent Himeji Castle – was in the final stages of restoration, and everyone suggested visiting after March 2015. But, we’re in Japan now, and Himeji was en-route so we figured that we’d stop off anyway and see how much of this famous castle we could actually see. 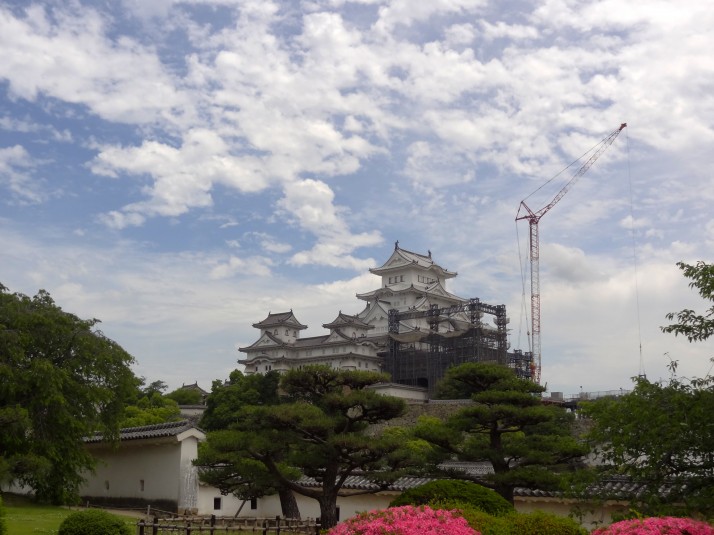 Himeji Castle in June 2014, just a little scaffolding obscuring our view. Although it was possible to visit the grounds and fortifications, the castle’s main keep was off-limits

Arriving with expectations of the castle being completely covered, we were delighted to find an almost un-obscured view of the resplendently restored Himeji main keep.

Because the cranes were still dismantling the scaffolding, the keep and its courtyard were cordoned off, which was slightly annoying because we were still charged full admission! However, as we found in Matsumoto, there were volunteers who offer free guided tours and as Himeji was quiet we got one all to ourselves. 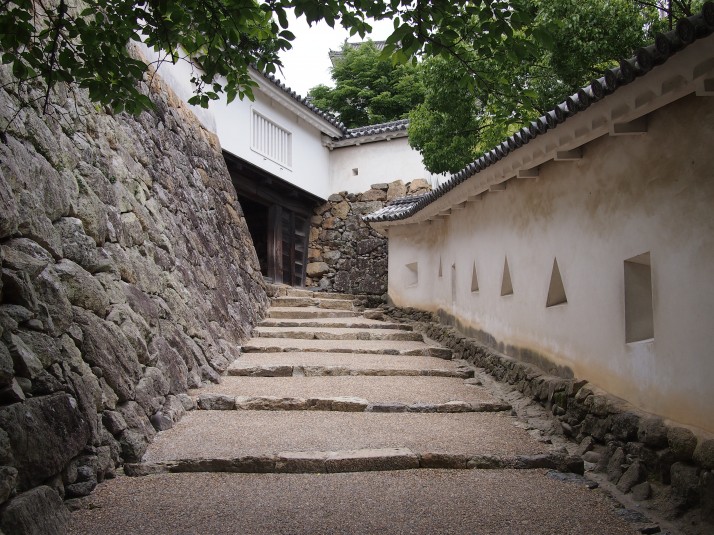 The defensive embrasures of Himeji Castle

Our excellent guide walked us through the battlements and defences, and we especially liked the different shaped embrasures designed for specific defence weaponry: square and circular ones for rifles, and tall rectangles for bow and arrows. The different shaped windows brought to mind a scene from the children’s TV show ‘Play School’ – “let’s look through the round window“.

We really like having a guide with us as they’re so enthusiastic about the castle and its history. As well as translating a lot of the exhibits they often add a lot of historical context and stories about Japanese history that isn’t included in the displays. 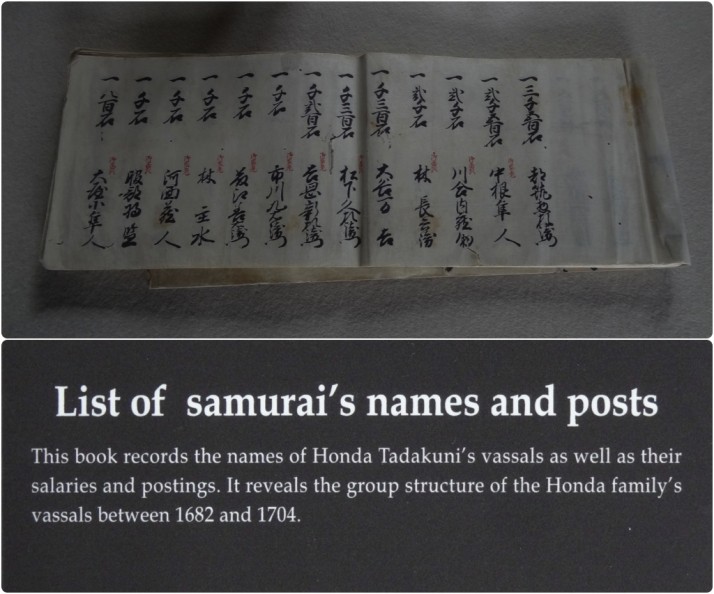 Our volunteer guide translated this list of samurai names, posts and salaries. Being a top samurai was very well remunerated! (Salary is the top line)

We opted for the combined entry ticket which included the Koko-en gardens west of the castle. Reminiscent of the walled Forbidden City in Beijing (though not even slightly symmetrical), the gardens are separated by passageways of high walls. 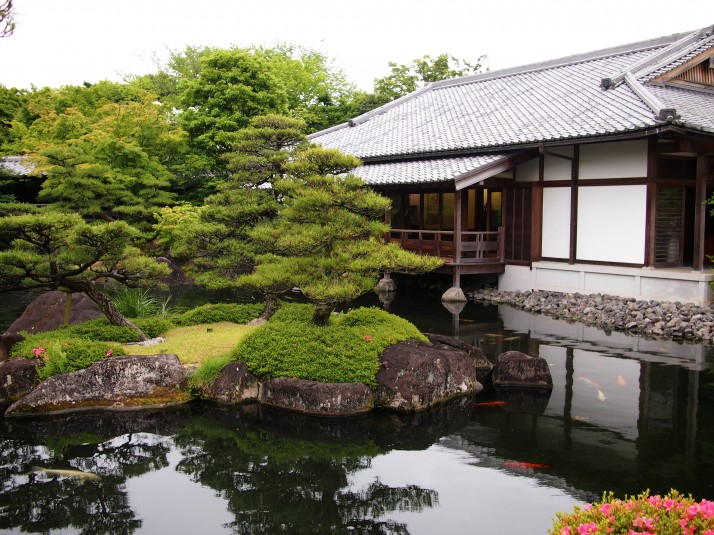 Cho-on-sai guest house in the Koko-en gardens. We sat here for about 20 minutes just watching the Koi 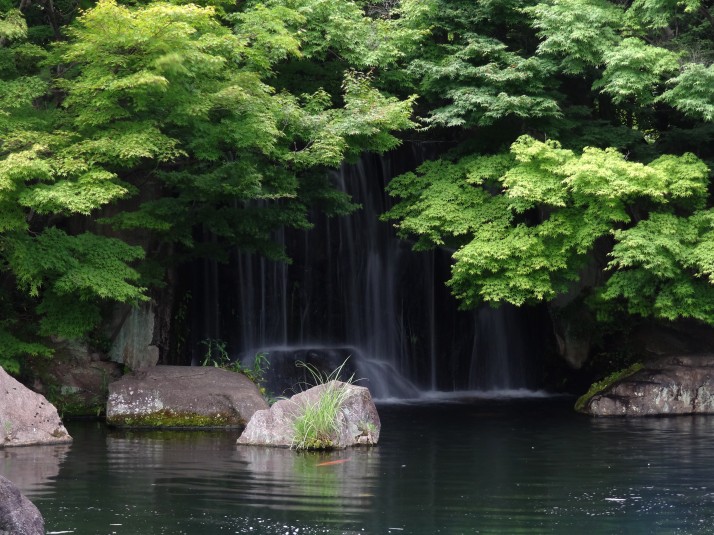 Koko-en is a collection of 9 gardens, each with a different theme. The first is a typical tea ceremony garden, arranged so the view is best from the guest house. 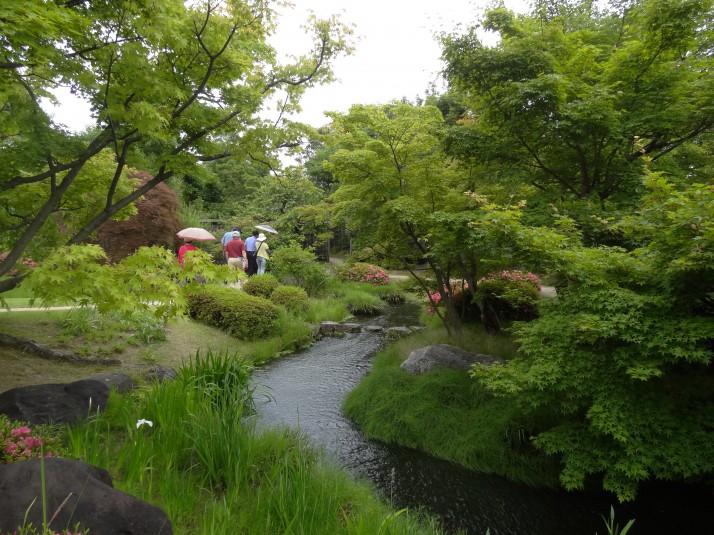 The ‘flatly landscaped garden’. We sheltered from a little rain in its pagoda

The fourth, fifth and sixth gardens share a fast-flowing, winding stream, and each has little bridges or stepping stones that invite the wanderer to cross. These joined gardens are seasonal – the ‘garden of summer trees’, and the ‘garden of winter trees’ are designed so there’s a different focal point depending on the time of year, and I thought it was also a clever metaphor – walking through the seasons is like walking through the passage of time.

But the eighth garden was my favourite. It’s a clever design of two looping pathways that each return you to your starting position, backdropped by Himeji castle. 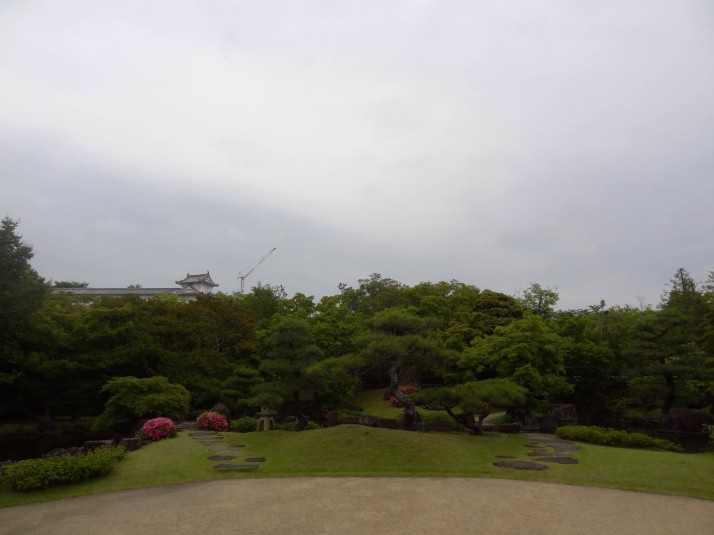 The excitingly named ‘garden with a hill and pond’ was my favourite of Koko-en. I liked the stepping stones and the single large pond

We feel pretty fortunate about our visit to Himeji. The external construction works were all but complete and we were afforded some great views.