Gyeongju was once the capital of the long-lasting Silla dynasty which started in 57 BC, ran for almost a thousand years, and grew to rule most of the Korean peninsula. Often described as a ‘museum without walls’ the area in and around the main city has more palace ruins, burial mounds, rock carvings and Buddha statues than anywhere else in South Korea. With so much to see, it was tough to decide where to spend our time.. Tumuli or burial mounds in Gyeongju. These ones are in the Daereungwon Tomb Complex which has a small entrance fee, but there are so many more that are in open parkland

The tumuli, or burial mounds, were a lot bigger than we thought they’d be, and the many open parks to the south of the city are full of them. Their size denotes the importance of the person buried inside, and while some have been looted or excavated over the years, a lot of them have been left untouched.

In the Daereungwon Tomb Complex, the highlight is the Cheonmachong tumulus – half of the mound has been hollowed out so you can see the construction from the inside. In this tomb, believed to be that of an unknown Silla King, the body was laid east-to-west, surrounded by a large, thick wooden coffin, which was covered in rocks, then covered in earth to form the mound. Replicas of the items buried with the King are on display, including a piece of his saddle that depicts a flying horse which gives the tumulus its name. 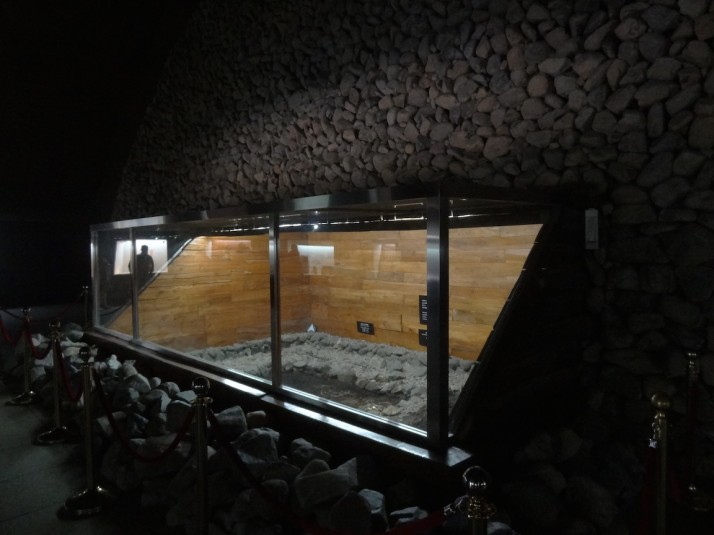 Just next to the tumuli is the Cheomseongdae Observatory. Built around 632~647, it is the oldest astronomical observatory in East Asia. It has 12 main stones forming the base – 1 for each month, 30 layers – one for each day of the month, and is constructed of 366 stones – one for each day of the year (OK, they’re one or two off!). Unlike the tumuli, we were expecting the tower to be a lot bigger than its description belies! 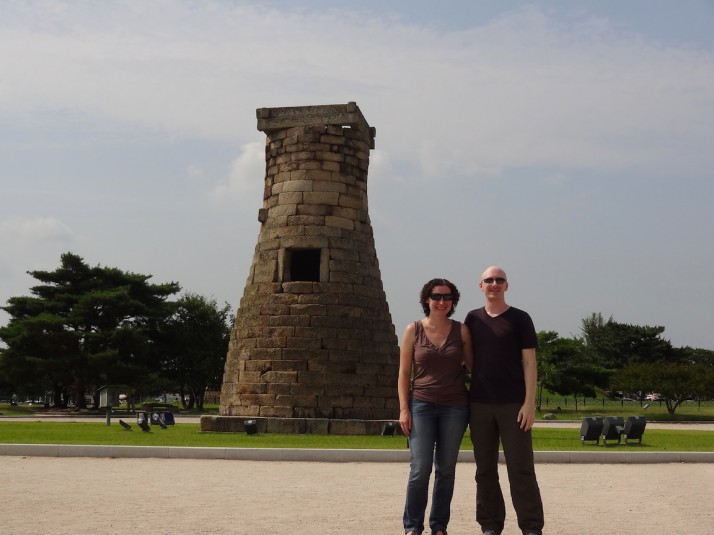 Us at the Cheomseongdae Observatory

Still surrounded by tumuli (yes, there are a lot of them!), are several lotus ponds. We were just a little late to catch them at their best, but we were just in time to see the tadpoles turning into itty-bitty frogs! 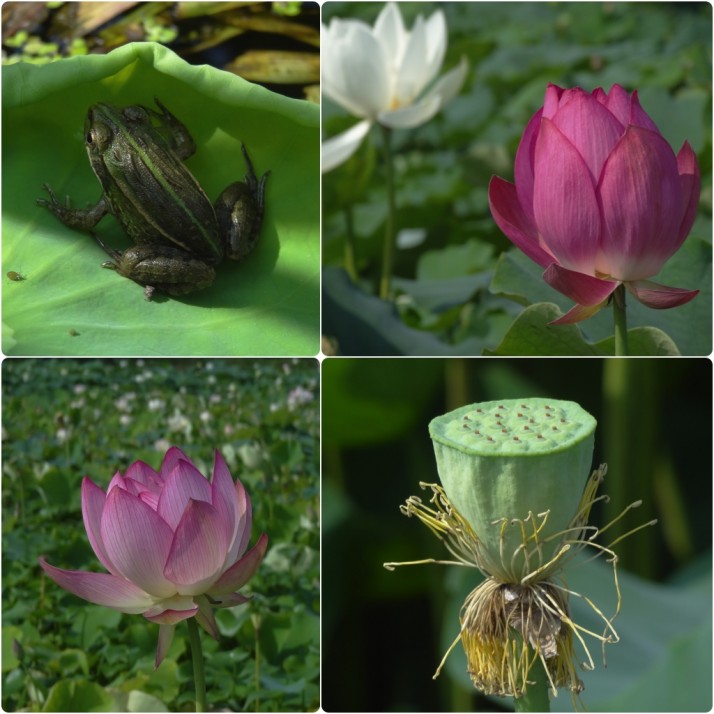 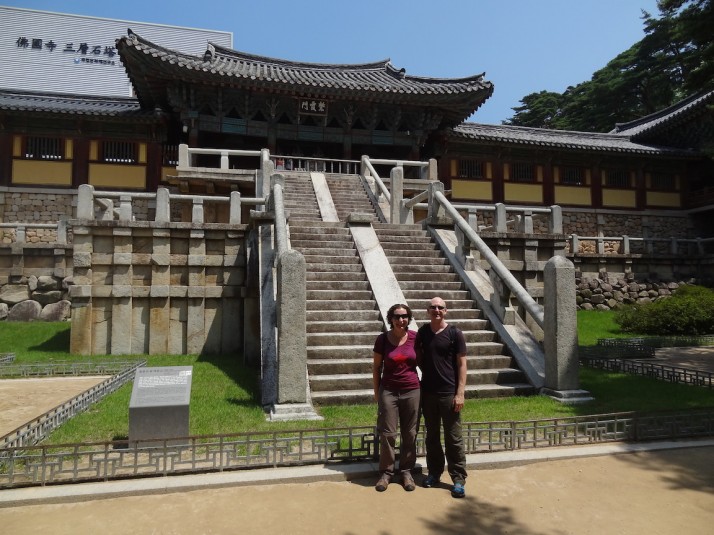 Us at the Bulguksa temple

Bulguksa temple is on the UNESCO World Heritage list and if that isn’t reason enough to visit, it’s also listed as a national Historic and Scenic Site and home to a number of designated national treasures as well as being the head temple of the 11th district of the Jogye Order of Korean Buddhism!

We arrived by bus and made our way up the steep winding pathway and through the lovely landscaped pond area to be greeted by the two magnificent stone staircases that lead up to the temple. In the main courtyard are Dabotap and Seokgatap – a pair of stone pagodas that are national treasures, one of which features on the ₩10 coin. Bulguksa temple is beautiful. We especially loved the brightly painted eaves and the separate courtyards that had their own distinctive styles – particularly Nahanjeon which was surrounded by little piles of stones, and the surprise of a finding a bronze pig in front of Geuknakjeon! Some of our favourite things at the Bulguksa Temple: beautifully carved and decorated eaves; Julie playing with the bronze pig; South Korean cairns, which are said to bring good luck, surround Nahanjeon

From Bulguksa, we made the short hike through the forest to the Seokguram Grotto.. 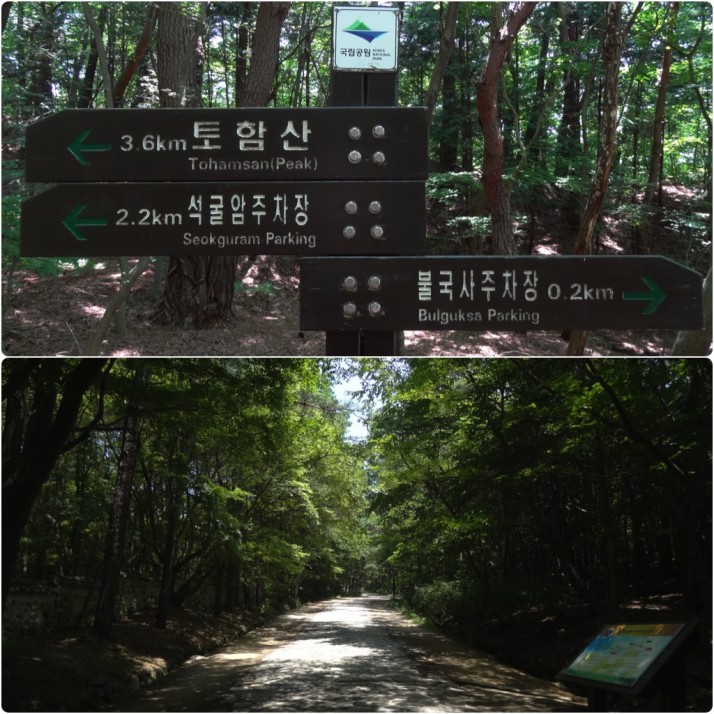 Hike from Bulguksa to Seokguram Grotto

The Seokguram Grotto was completed in 772 and is home to a large stone sculpture of the Seokgamoni Buddha, the historic Buddha at the moment of enlightenment, which is regarded as one of the best examples in the world. Seokguram Grotto. Repair work was being carried out (very noisily I might add) but we could still get in to see it 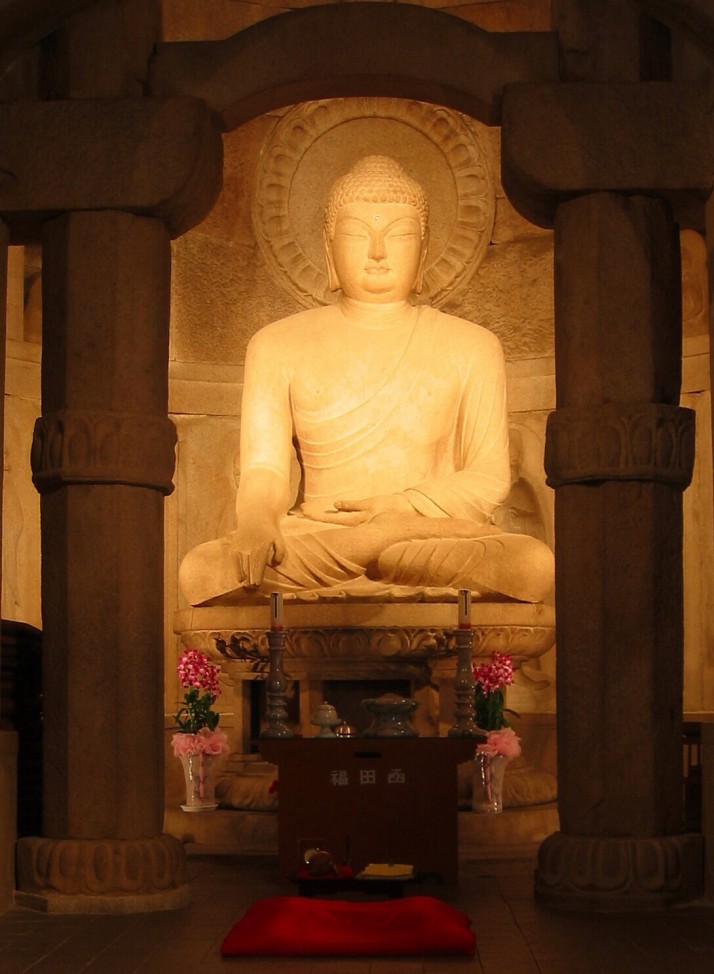 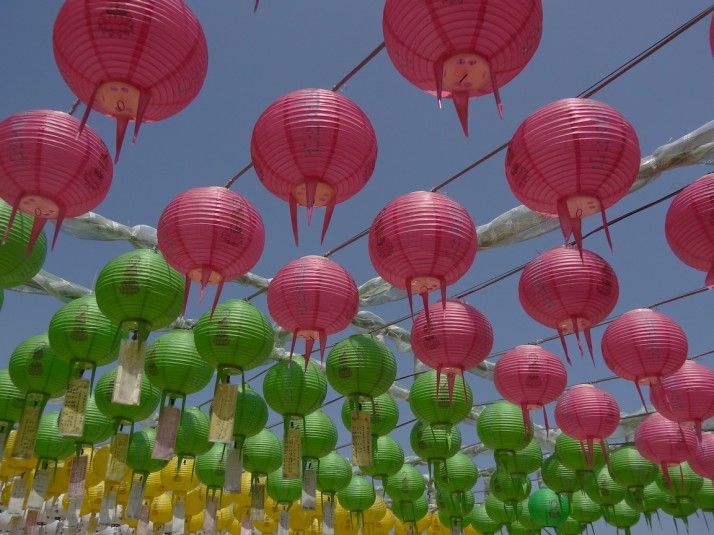 Brightly coloured lanterns outside Seokguram Grotto, where we paused for ice cream :o) The Golgulsa temple is the home of Sunmudo, a Korean martial art practiced by Buddhist monks initially as a method of dynamic meditation, and later revived to help repel invasions from the Japanese.

Set in a valley up the the side of Mt. Hamwol, the road through the grounds gets progressively steeper, and culminates in a hillside temple with an outside training area and display platform where demonstrations take place. As we had some time, we climbed up to see the Buddha carvings, and watched a chanting monk in Korea’s only cave temple. 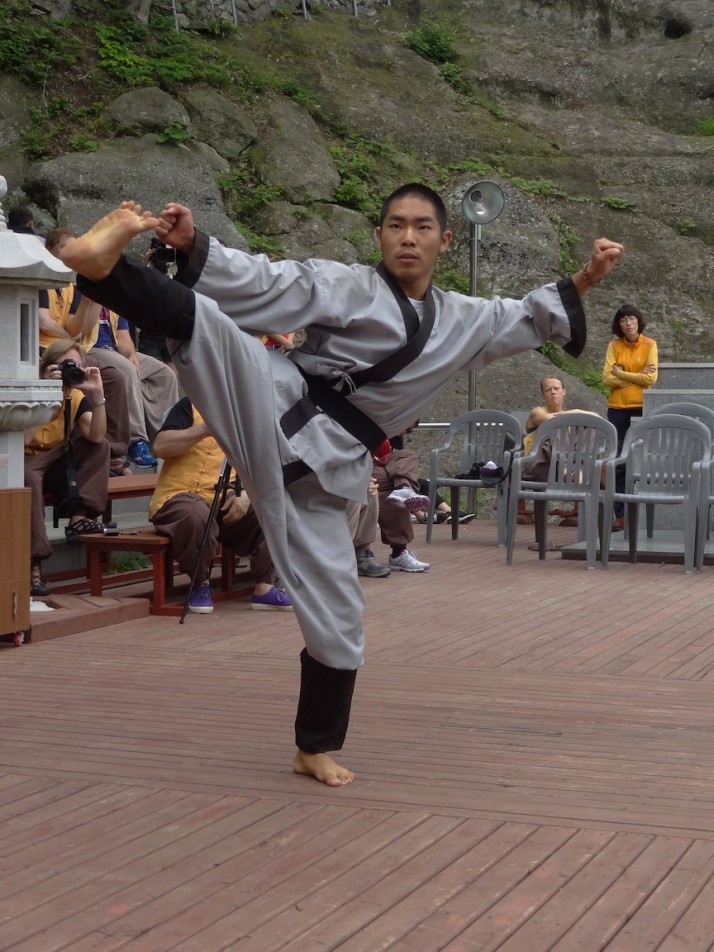 Every day at 11am and 3:30pm (except Mondays), students of the temple give a short demonstration of their skills and flexibility, which was very impressive indeed! The head monk’s routine looked more like Ashtanga yoga to our eyes, and in his Korean speech afterward we heard him say ‘yoga’ a few times. It made us want to take up our practice again.. 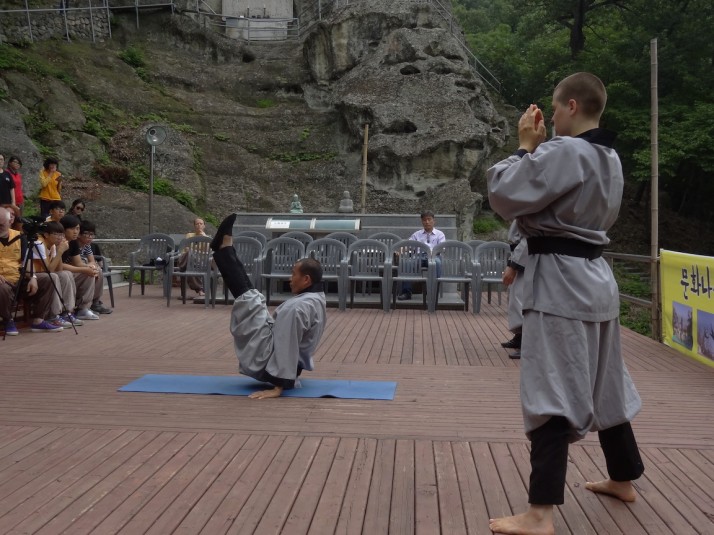 While the whole of Gyeongju befits its description of a ‘museum without walls’, we agree with Jim Cheney’s sentiment that nowhere in Gyeongju is this truer than the Namsan mountain range.

The range itself is 8km by 12km and contains various artefacts thought to date from the Silla period. We chose a simple yet steep climb up the Samneung Valley to the top of Mt Geumobong (468m high), and down the Yongjanggol valley on the same side of the Namsan range. 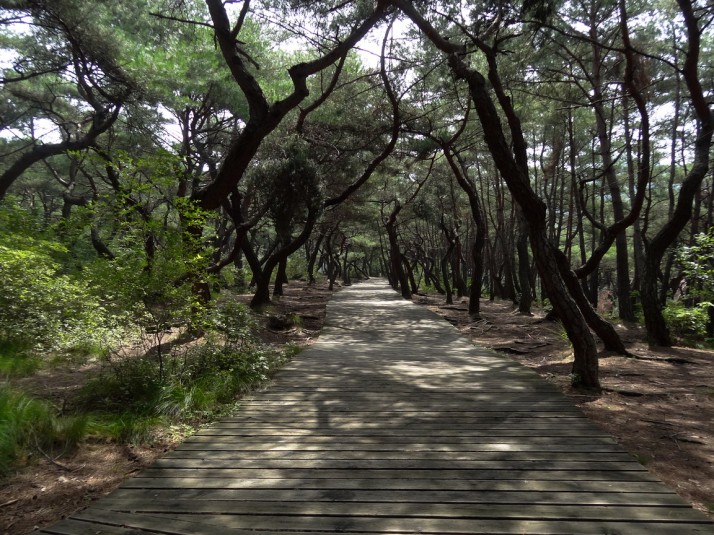 The start of the path in Samneung Valley. Just around the corner it got very steep, very quickly!

I don’t think it would have mattered which path we chose, it seemed like every few steps there was a signpost directing us left or right a few metres to some carving, statue or other point of interest. Not only was it great to see so many works of art in such close proximity (and without barriers or ropes), but it helped break up the hike so it didn’t feel so strenuous! 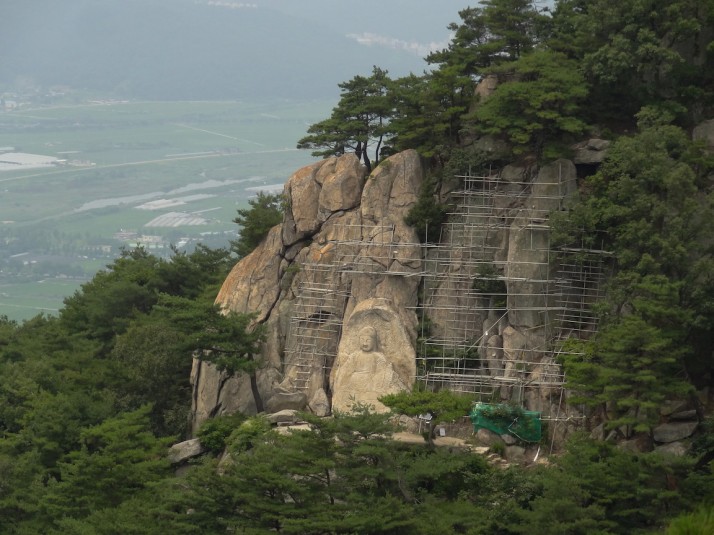 The popular 7-metre tall Maitreya Buddha carving, sadly undergoing some preservation works during our visit so we could only see it from afar

The views over Gyeongju were very nice too 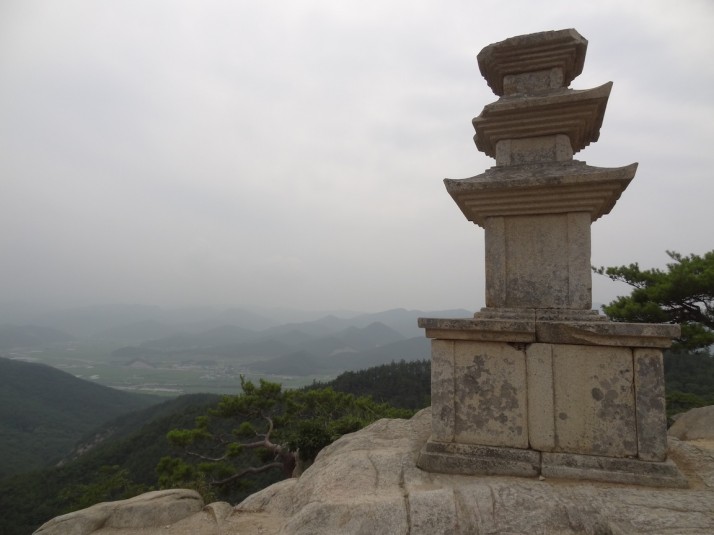 We were only in Gyeongju for a few days and we packed quite a bit of sightseeing in. We’re glad we did – there’s so much to see here and having a lot of it outside is a welcome change from air-conditioned museums!