As well as being well worth a visit for the excellent Savitsky Museum, Nukus is the jumping off point for tours to what remains of the southern Aral Sea. We booked through the Jipek Joli Hotel and they were able to match us up with another couple of travellers to share the cost of the car and driver. Andrew, Julie, our driver (who Andrew nicknamed Arnie), Tahir and Yin Yee beside our trusty 4×4

The first stop on the tour was just 13km west of Nukus at the Mizdahkan Necropolis which has been used as a burial ground since the 2nd century BCE when the area was the site of a large city. The city was destroyed by Chinggis Khan in the 13th century but burials have continued to the present day. We’d already visited with Jo and seen many of the older and more impressive tombs on the hill top so this time we struck off in a different direction and were surprised to discover some graves marked with Orthodox crosses amongst the much more common Muslim crescent moons. On our first visit we were given some information by the site’s caretaker delivered in a very inventive display of charades once he realised we don’t speak Russian. His miming of a camel definitely sticks out, but in reality we probably got a lot of the words without necessarily understanding the complexities of the history he was explaining. We noticed that a lot of the graves looked as if they were collapsed or opened up. We speculated that perhaps bodies were removed after a time and spent a lot of time peering down to see if we could get any clues. We later found out that the collapse is a natural settling of the earth over the reeds which are laid above the body so it’s surprising (and lucky!) that we didn’t see any skeletons… 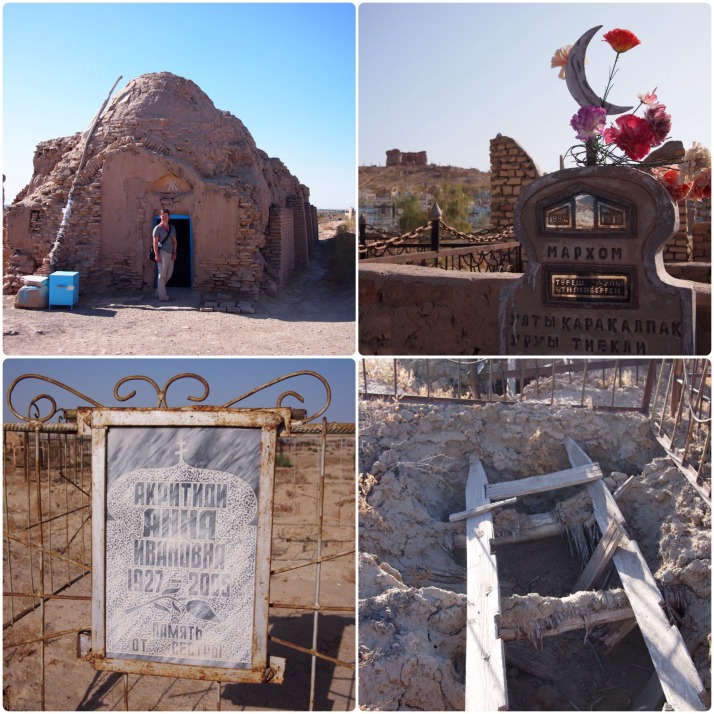 Mizdahkan Necropolis (clockwise from top left): Jo at the entrance to the Mazar of Shamun Nabi; plastic flowers and crescent moons decorate many of the graves; collapsed grave; gravestone with Orthodox cross

An hour or so after getting back into the car we stopped for lunch and met up with the passengers of the other car doing the tour on that day – three Swedish men who do a trip each year with the theme of disasters (last year they visited Chernobyl!), and their local guide. Not long after lunch the surfaced road turned into dirt track, reminding us of the tours we did into the Mongolian countryside. 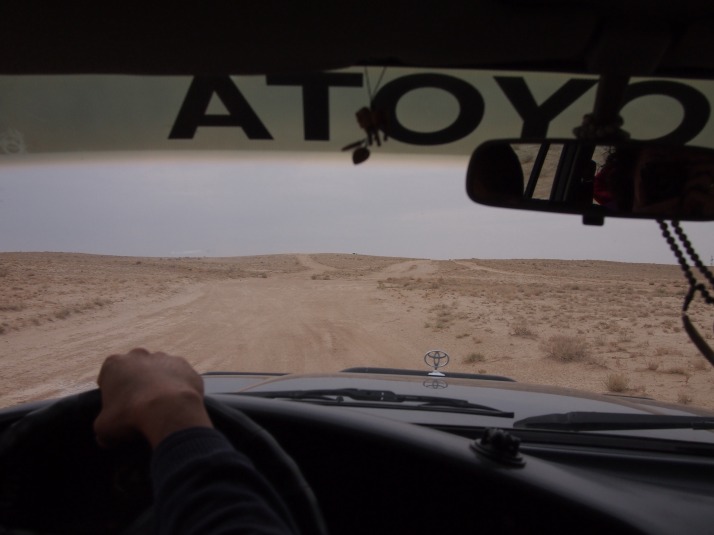 Bumping over dirt tracks on the Ustyurt Plateau

For the rest of the afternoon we drove over the Ustyurt Plateau, the raised landform which divides the basins of the Caspian and Aral Seas. This was itself once under an ocean and we found shells amongst the strange scrubby desert plants. 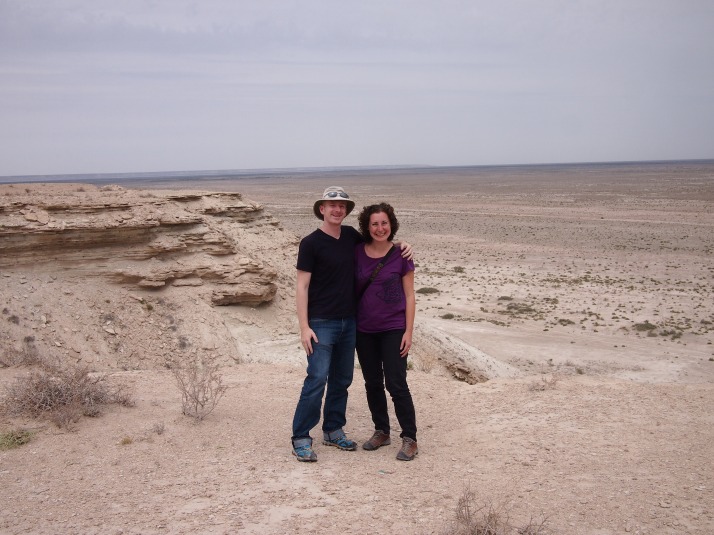 Us at the edge of the Ustyurt Plateau

Just off the Ustyurt Plateau lies Lake Sudochie and beside it an abandoned fishing village. The guide told us that this lake was once part of the Aral Sea and, although it had also dried up in the past, it has been artificially recreated by feeding it with a canal from the Amudarya River. It is home to a surprising number of birds, though we couldn’t get a good look at them as we didn’t have any binoculars with us. 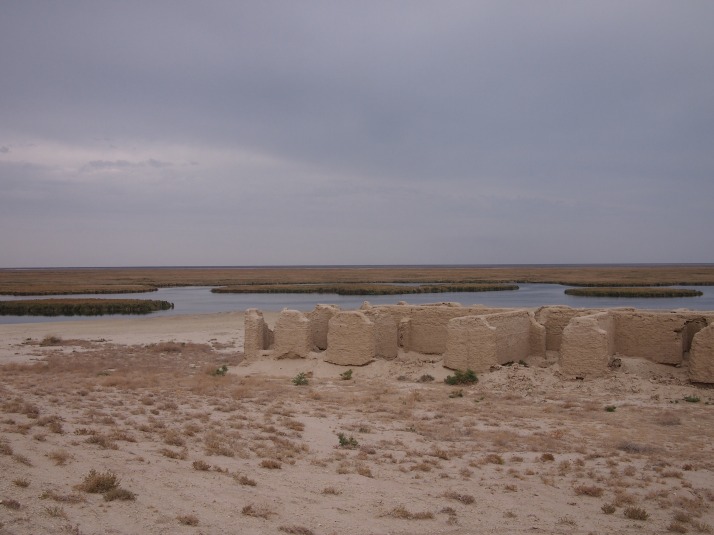 The mud walls of an abandoned fishing village beside Lake Sudochie

The Aral Sea was fed by two rivers, the Amudarya in the south and the Syrdarya in the north. In the middle of the 20th century, the Soviet Union decided that the Central Asian area would produce all of the cotton required for the whole of the USSR. As cotton is a very thirsty crop, and the Central Asian deserts and plains are not naturally a particularly wet place, hundreds of kilometres of irrigation channels were constructed to water the plants from the two rivers. Due to evaporation and leakage, these canals were extremely inefficient and up to 75% of the diverted water was being lost. Directly because of this, the Aral Sea, which was once the 4th largest saline lake in the world started to shrink. We arrived at the western shore of the remaining lake just as the sun was starting to go down. 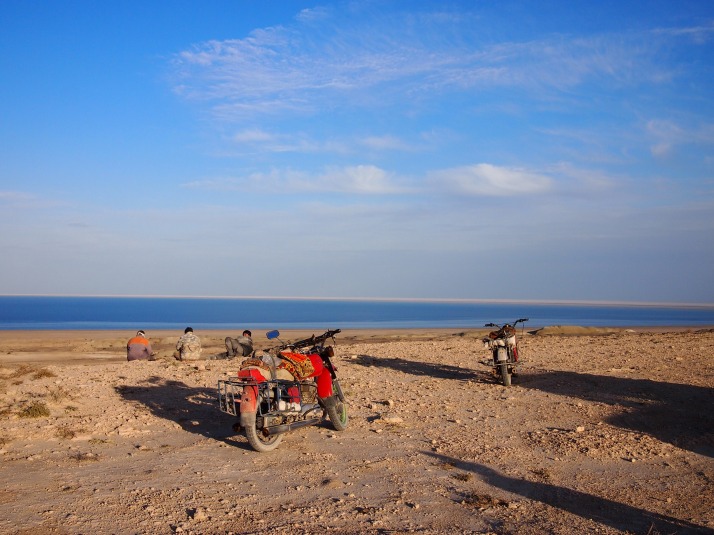 As a testament to how fast the lake is shrinking, our guide told us that just two years ago it wasn’t possible to see the other side of the lake, now we could see the yellow line of the shore along the horizon. Those willing to brave the cold, including Andrew, went for a dip in the salty water. As the water’s volume shrinks, the salt becomes more concentrated and currently the Aral Sea has about 150g salt per litre compared to 40g in the Pacific Ocean. This high level of salinity gives you extra buoyancy and it is possible to float with your arms and legs sticking right out of the water. Andrew floating in the Aral Sea

That night we slept in tents a little way from the lake’s shore. Our driver cooked us a dinner of plov over a campfire while we marvelled at the pitch black sky and the huge number of stars. 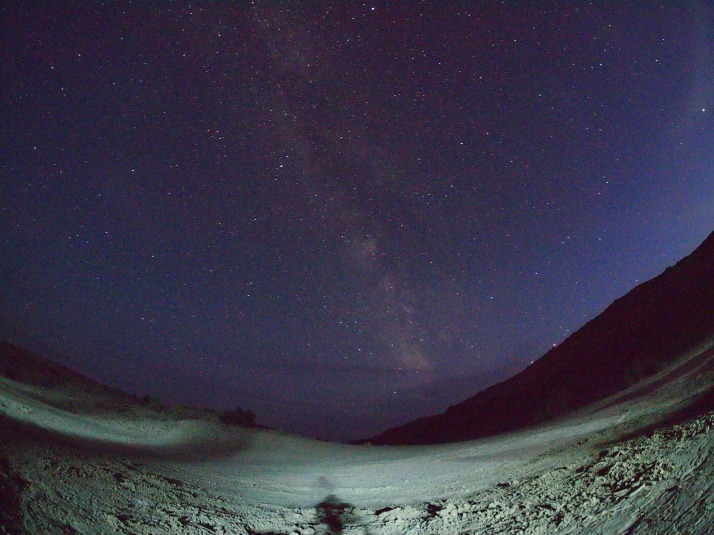 The Milky Way stretching across the sky over our campsite

We struggled to get the zipper on our tent to open and close without the zip splitting, but eventually we were both inside and settled into our sleeping bags. Predictably, I found it quite cold during the night while Andrew thought the temperature was verging on too warm. This despite the fact that I had on my fleecy hat, long-sleeved T-shirt, leggings and socks while he was just in shorts… After a breakfast of bread, cheese and salami we set off in the cars, at first driving over the Ustyurt Plateau again, where we stopped to see some old gravestones from Kazakh tribes, before descending onto what was once the seabed and driving towards Moynoq. Descending from the Ustyurt Plateau to the former seabed

50 years ago, Moynoq was a thriving fishing town producing 20 million cans of fish per year. Nowadays, it is over 150km from the edge of the Aral Sea. It’s all very well seeing pictures and hearing stories of the lake’s demise but I didn’t really understand it until we’d driven for an entire morning from the edge of the lake to a town which used to be on the lakeside. 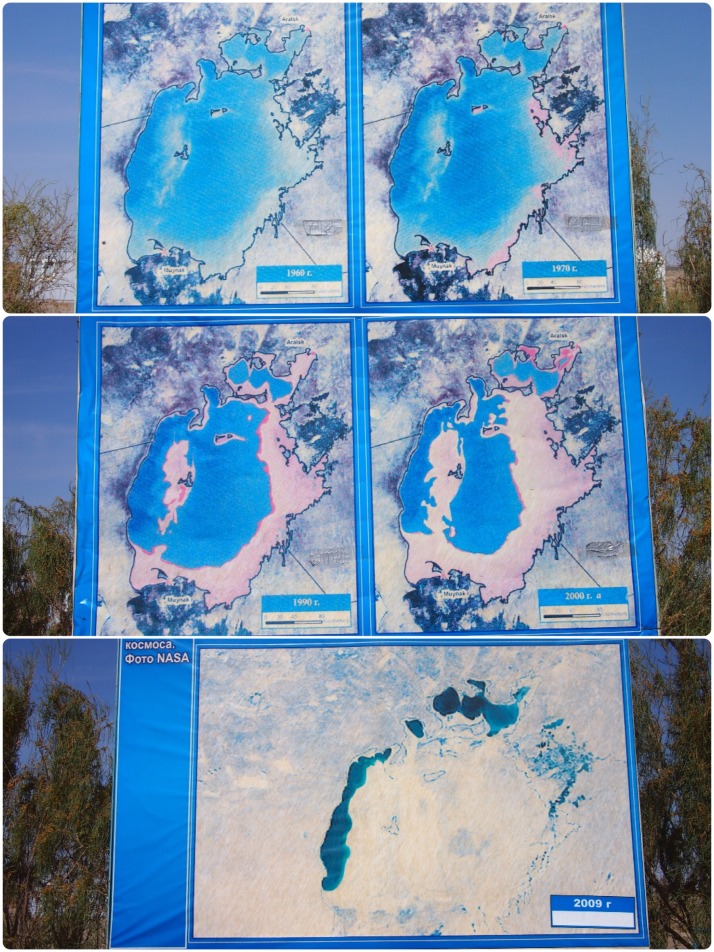 The most stark reminder of the Aral Sea at Moynoq is a ships’ graveyard. While most of the former fishing fleet has been dismantled for scrap, a few boats have been left to rust in the desert as a reminder of the former industry. To see the rusting ships and look into the distance across miles and miles of desert was incredibly poignant. Unfortunately, the effects of this man-made disaster are even more serious than the loss of livelihood for the area. Climactically, the sea used to have a moderating effect meaning that summers are now much hotter and winters much colder. Winds whip up dust storms containing a mixture of salt and sand and depositing them in the atmosphere resulting in accelerated glacier melt on nearby mountains, and serious health impacts for local residents, including respiratory diseases. 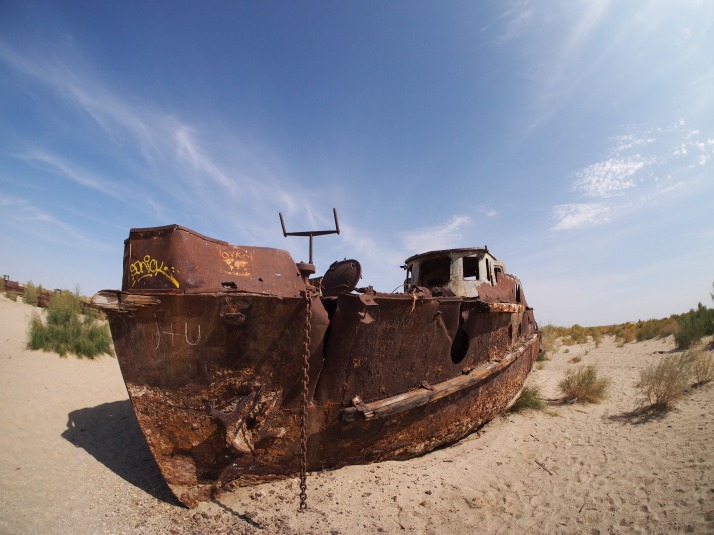 In Kazakhstan, where the northern part of the Aral Sea is situated, work has been done to reverse the sea’s shrinkage with significant success and positive impacts to both local people and the environment. Unfortunately, the Uzbekistan government seems more interested in extracting gas from the seabed than seeing it again covered in water and sadly it is likely that it won’t be many years until nothing more is left of the southern Aral Sea. 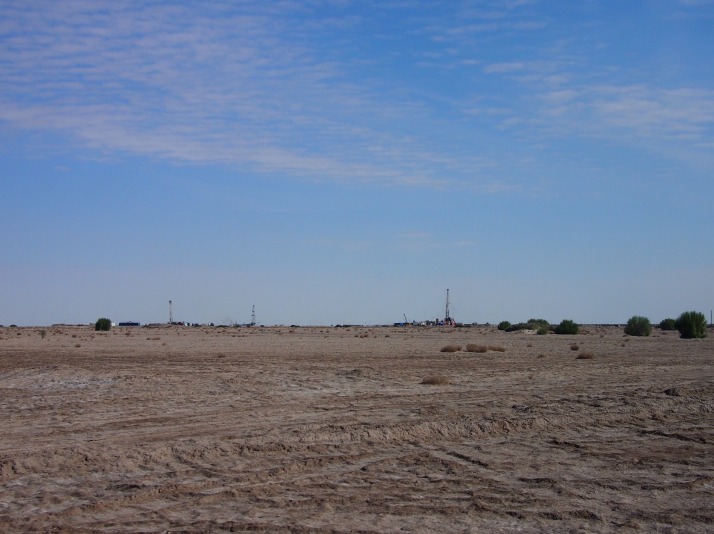 Gas drilling rigs as we crossed the former Aral seabed

Much of the information I have used about the Aral Sea’s history comes from this excellent article. I highly recommend a read if you’re interested in an in-depth analysis of the impact (thanks to Jo for sharing the link with us).

7 thoughts on “Tour to the Aral Sea”