After Cat Ba Island we travelled to Phong Nha-Ke Bang National Park. The national park is an emerging area for tourism in Vietnam with the world’s two largest caves both having been discovered there in the past 10 years. We were all looking forward to our planned activities which went something like this:

Day 1 – arrive by overnight sleeper train from Hanoi at 07.49, hire bikes and explore the area around our guesthouse, Phong Nha Farmstay
Day 2 – take a guided tour 7km into Paradise Cave, the second largest cave in the world
Day 3 – transit to Hue through the de-militarised zone (DMZ)

We caught our sleeper train with no problems and settled down for a good night’s sleep in our 6 berth compartment. Two of our cabin mates got off in the early hours leaving just the three of us and a Vietnamese lady. We knew that the train was not scheduled to stop for long in Dong Hoi so we got up at 7am, dressed, donned our rucksacks, refused the offer of some rice from the friendly lady and waved her goodbye to wait by the carriage door. After several minutes of standing in the corridor it was clear that we weren’t imminently arriving at the station and so we went back to sit in the compartment.

After another hour, no sign of the station and having had no breakfast we decided to investigate the offerings of the buffet car. The waiter gave us a menu but seemed keen for us to try the ‘chicken rice’ so we ordered three trays of rice with a fried drumstick and some sliced cucumber. It was pretty tasty considering it was cooked on the train and only cost 40,000 VND each (£1.20) or maybe that was just extreme hunger! The train stopped often, once for almost an hour, to let trains going north pass. We tried to work out where we were so that we could estimate our arrival time but we were never quite sure and anyway with all of the stops our speed wasn’t really consistent. Mainly we settled into reading, going through photos from the last couple of days and playing Angry Birds! 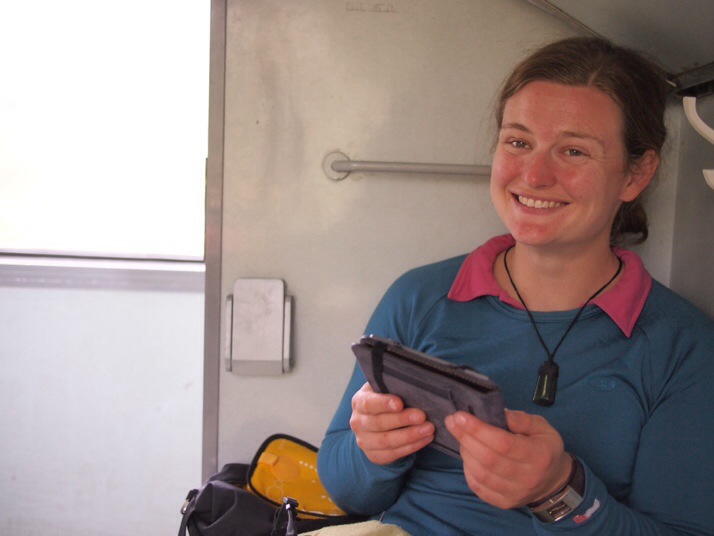 Jo reading on the train

Eventually we picked up a little speed and pulled into Dong Hoi station. 8 hours late on what should have been a 8.75 hour journey… Fortunately our taxi transfer from the farmstay was waiting for us and we later found out that the train from the day before had arrived just a few hours ahead of ours – a mammoth 37 hours to travel the 522km from Hanoi. 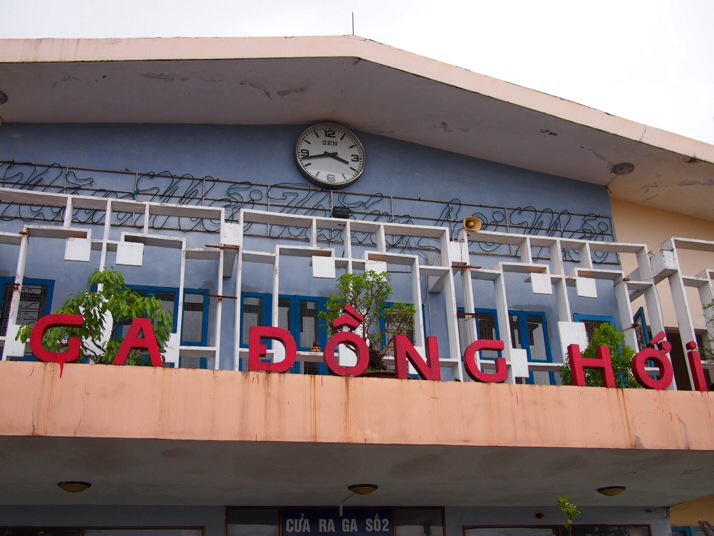 When we arrived at the farmstay there was more bad news. Due to the two typhoons and subsequent flooding which had torn through the area over the previous two weeks (also the reason for the train’s delay) there was no mains electricity. They did have a generator for lights and charging cameras, laptops and phones but it wasn’t powerful enough for air conditioning or hot water. A cold shower’s never much fun but Vietnam is warm enough that it wasn’t so bad. Much more disappointingly though, access roads into the National Park had been closed and Paradise Cave wouldn’t be open for at least another 3 days.

Oh well, we decided to drown our sorrows in a nice bottle of wine (or two) paid for with a small portion of the budget that we’d set aside for the cave tour, eat a thoroughly delicious home cooked meal, and hope that it would have stopped raining by the next morning so that at least we might be able to do a bike ride.

We awoke to find that the flood waters, which at their height before our arrival had been lapping the top step of the house, had fallen quite far in the night. Our hopes were buoyed but the weather had other plans and during breakfast it started to rain again. Heavily. We settled in to some more reading, blogging and photo editing, and Andrew amused himself by turning the 3G dongle in the guesthouse’s laptop into a wifi hotspot so that we could check our emails. 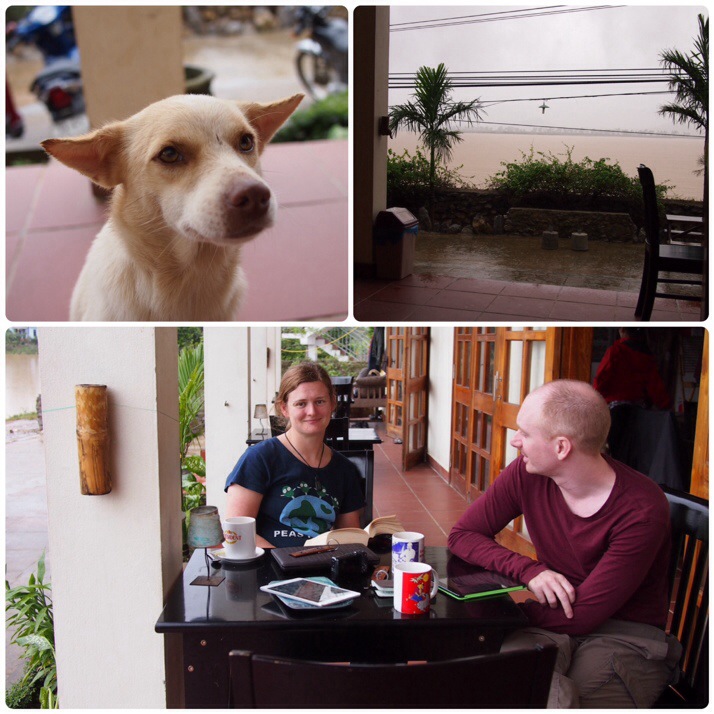 Lucky, one of the guesthouse dogs, a morning of heavy rain, Jo and Andrew reading on the terrace

By lunchtime cabin fever had begun to set in. The rain had eased a little so we decided to borrow bikes and head to the local noodle shop for lunch. After riding past it at first (when he said on the left after the turning onto the main road we didn’t expect it to be on the corner of the junction!) and meeting a number of locals who varied between shy smiles, shouting hello and trying to have us hold a baby, we turned around, looked more closely and were pleased to find the small restaurant empty but open. We ordered three bowls of beef noodle soup and crossed our fingers that the rain would stop so that we could explore some more local life in the afternoon. 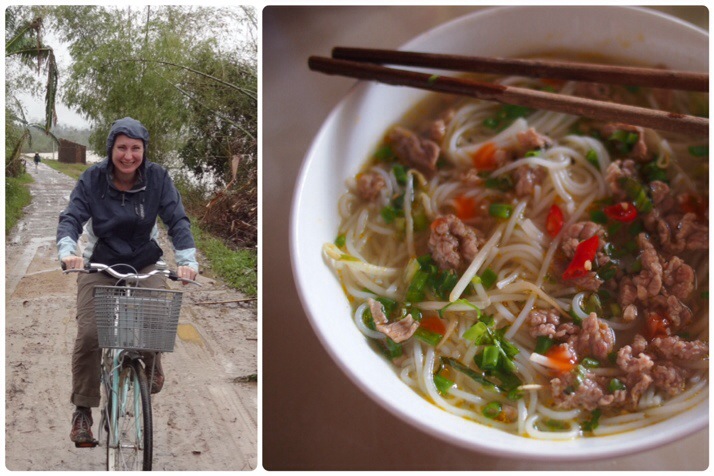 Cycling into the village, the noodles were worth it

After eating we convinced ourselves that the rain was getting lighter and we could head out a bit further on the bikes. Mike, the guesthouse manager, explained how to get to Phong Nha town mentioning that the first part would be very muddy and that “the bridge might be flooded but you should be able to wade through”. It sounded like an adventure! 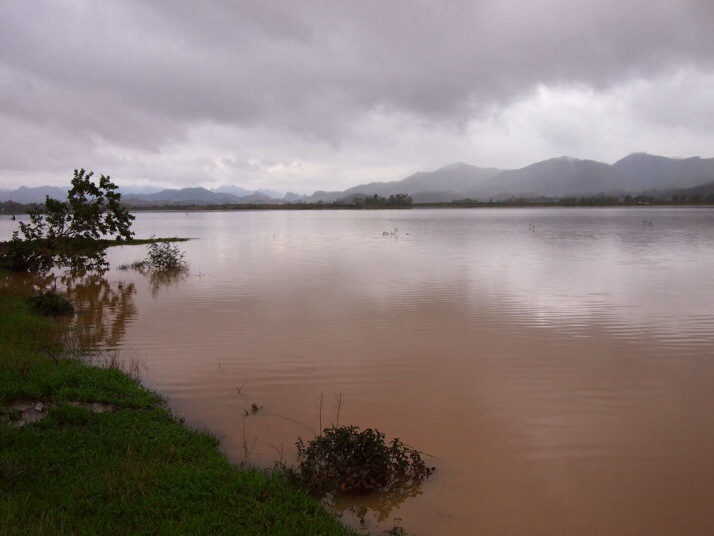 Flooded fields outside the farmstay, we’re told that there are rice paddies under there somewhere…

It soon became clear that the rain definitely wasn’t going to stop. We greeted the slightly bewildered looks of locals with smiles and more than once we heard peals of laughter following us down the road from people sitting on their dry porches. I suspect that there are several Phong Nha residents who now think that foreigners are completely crazy and enjoy cycling in a downpour without the usual Vietnamese accessory of a waterproof poncho. By the time we reached ‘the bridge’ we were drenched and, faced with a raging torrent, we reluctantly turned around. Andrew at ‘the bridge’

Back at the farmstay, Ben, the Aussie half of the Australian-Vietnamese couple who own the place, took pity on us and offered to drive us into town. During the short trip we saw some of the limestone karsts at the edge of the national park, met the man who discovered the world’s largest cave, and had a beer at the hostel which Ben also owns. After another delicious dinner we settled down to a Monopoly tournament with Ben, his wife Bich, his visiting friend Nathan, and Dean who works on reception. As with all games of Monopoly it dragged on for hours with plenty of friendly rivalry. Unlike most games of Monopoly I found myself in the winning position! 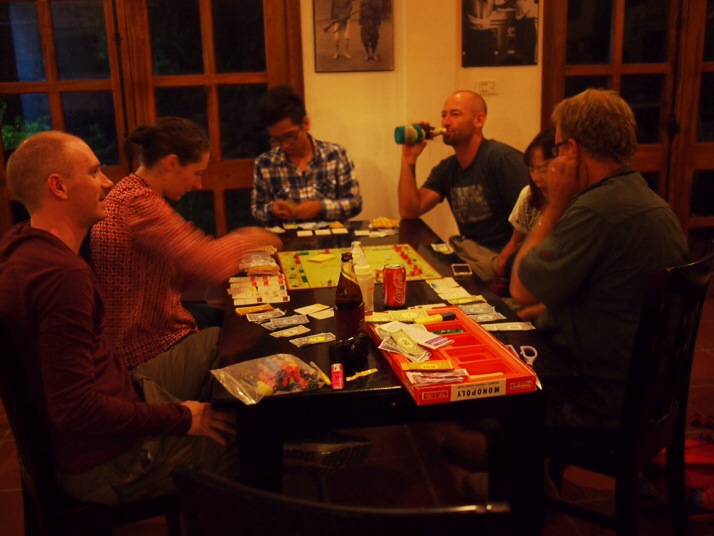 Monopoly at the Phong Nha Farmstay

At last, something that was in our original plan! The transfer to Hue began at the slightly uncivilised hour of 7am and, after a later night than expected, we were all a little groggy but there was time to rest during the two hours that it took until our first stop at the Vinh Moc tunnels. The village of Vinh Moc was an important point in the supply line of North Vietnam during the American (Vietnam) War. Because of this the Americans bombed the area heavily to force the villagers to leave. Instead they built almost 2km of tunnels and moved the whole village underground. 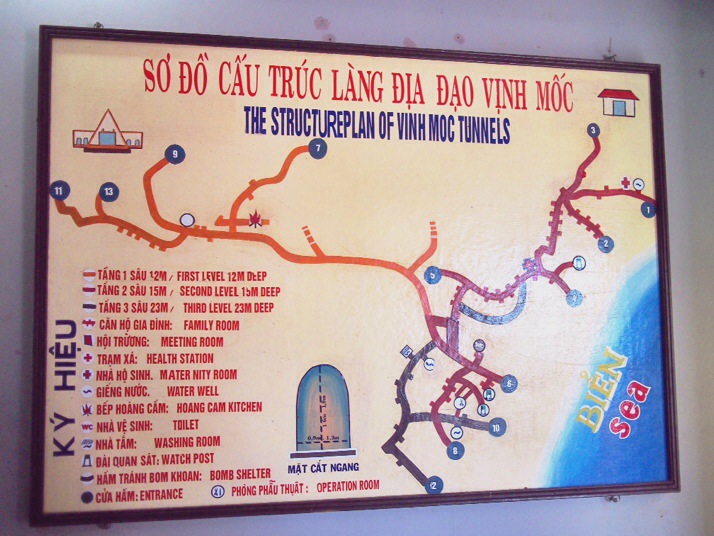 Plan of the tunnels

Our guided visit took us through the upper levels of the tunnels (the lowest levels can only be visited in the dry season). As we crept through, not quite able to stand up, we saw the tiny niches where whole families would live, the meeting room and medical stations, including a reconstruction of the maternity area. The villagers were underground for so long, from 1966 to early 1972, that 17 babies were born inside the tunnels! Despite the Americans dropping an average of around 7 tonnes of bombs per person on the area they didn’t manage to destroy the tunnels and no villagers lost their lives. Unfortunately, our guide seemed somewhat disinterested and keen to get the visit over as quickly as possible, but despite that it was a fascinating place to see. 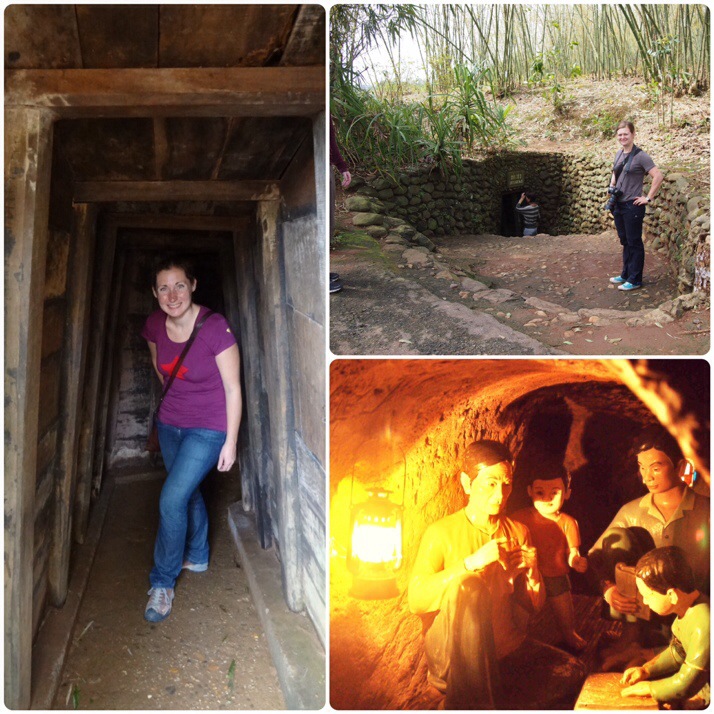 Julie just inside the tunnels, Jo at a tunnel entrance, the cramped area where families had to live 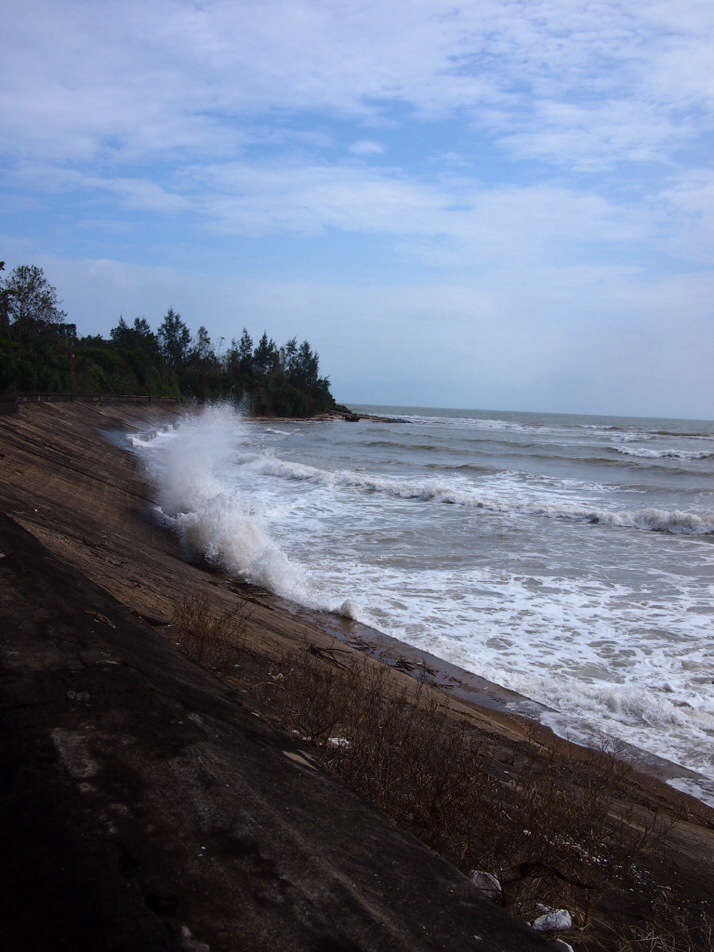 Some of the tunnel entrances are right next to the sea

Our second and final stop in the DMZ was at the Ben Hai River Museum. This was the border between the two halves of the country during the war and items on display include giant loudspeakers used to shout propaganda messages across the river and a huge flag tower. There was also an exhibit showing the injuries which are still happening from unexploded bombs and land mines. 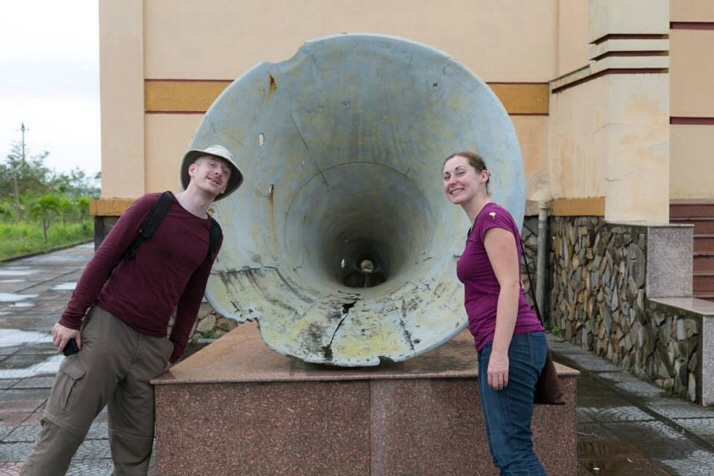 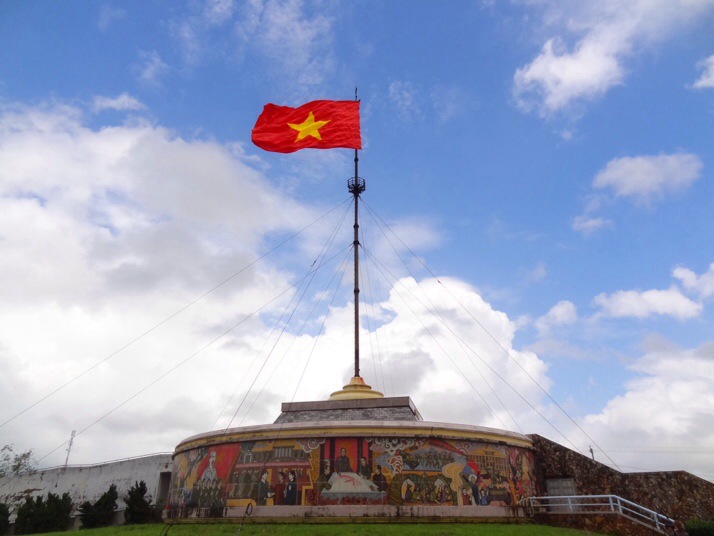 We arrived in Hue a couple of hours later. It wasn’t quite the stay that we’d hoped for, but it was nice to have some downtime and it whetted our appetite to visit the National Park again in a slightly less wet season.

3 thoughts on “When things don’t go according to plan”