Hue is Vietnam’s old Imperial Citadel. The fortified centre is similar in layout to the Forbidden City in Beijing, but as most of its population lives within the walls, it’s closer in function to Datong.

We had a bit less than 2 rainy days to explore the city and its surrounds. Besides being the old capital of Vietnam for about 80 years, it’s also famous as a site of intense fighting during the Vietnam/American War. As a result, the city was finally levelled by the USA and South Vietnamese in order to “save” it. 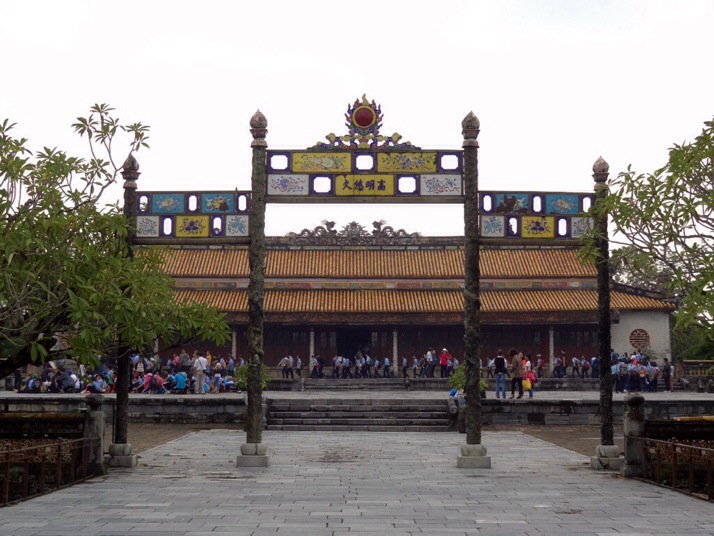 Like a Russian doll, Hue’s Citadel is actually three Citadels nestled inside one another, with a 30m wide moat around its outermost perimeter. Julie, Jo and I loved the intricately decorated gateways into to the self-contained complexes and residences, which we also found to be handy shelters from the frequent bouts of rain. 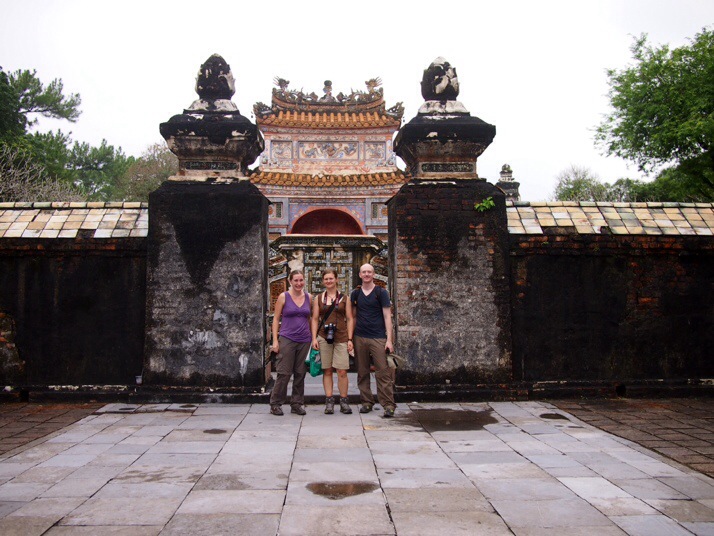 Julie, Jo and I in front of one of the many beautiful gateways in Hue’s Imperial Citadel 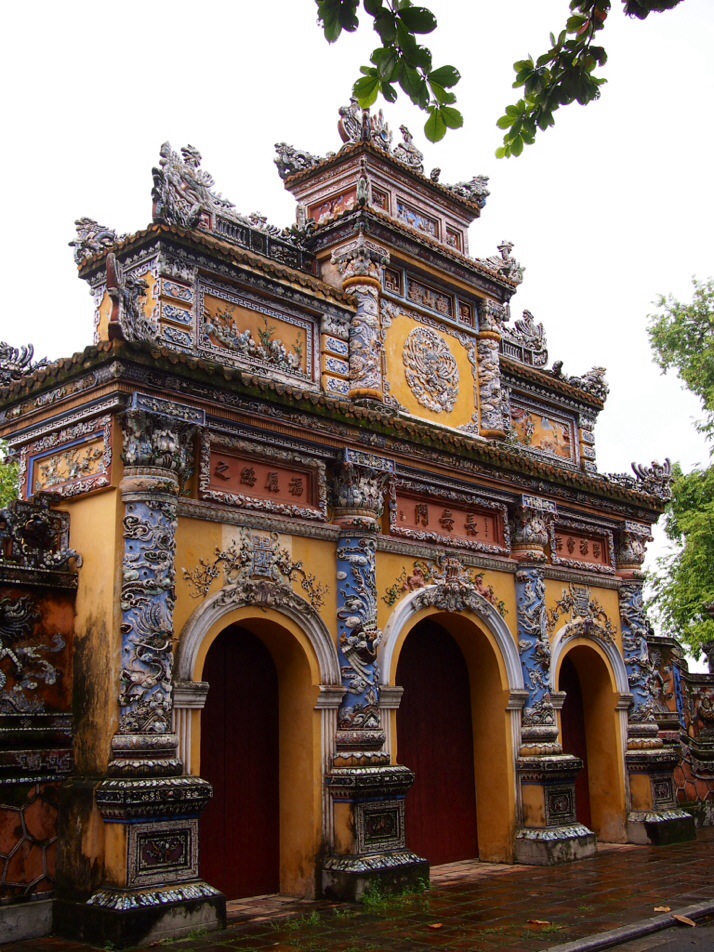 Just how beautiful you ask? How about this..

The centre-most Citadel is also known as the Forbidden Purple City and is in the process of slowly being reconstructed. 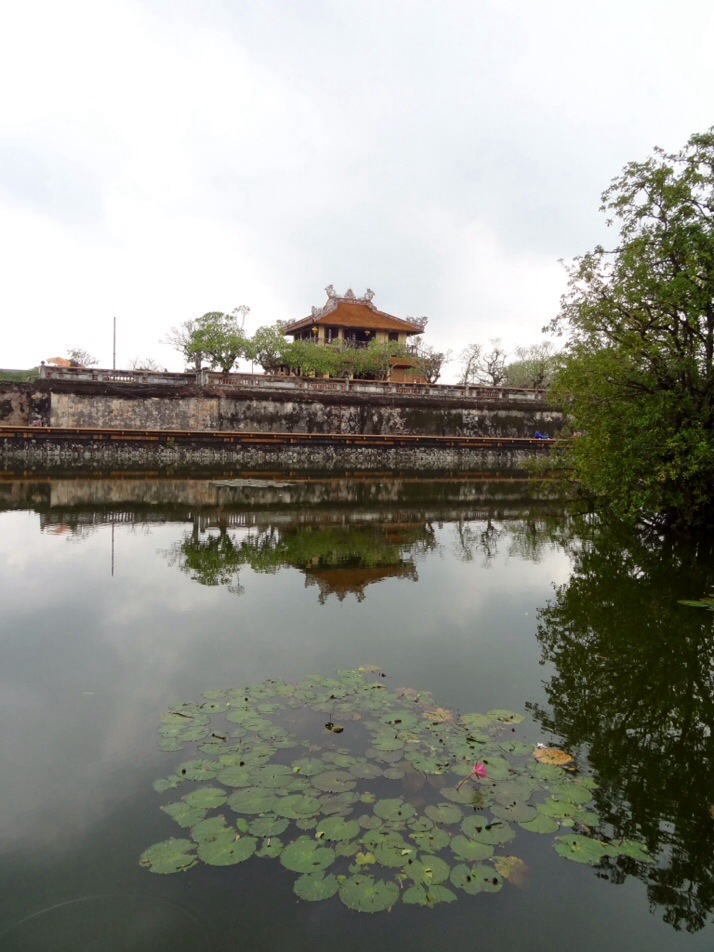 Our timing was pretty much impeccable all day – we’d just sat down and ordered a round of Bánh Khoái at a street corner food stall when it lashed it down. Fortunately their makeshift plastic sheeting roof kept us dry! Bánh Khoái – a Hue specialty. Comes with different fillings (prawn or sliced meat pate) in a crispy corn taco-like shell. Very nice if a little on the greasy side!

We’d originally thought we’d hire bicycles to visit a couple of the Royal tombs, but given the inclement weather we decided we’d hire a taxi instead. That turned out to be a fantastic decision – not only did our rain-dodging good fortune hold out as it rained while we were taxiing between the tombs, but we got to see 3 tombs instead of the 2 closest ones we thought we could reach on the bikes.

Our taxi driver took us to the Tomb of Khai Dinh first, a modestly sized hillside tomb of 5 levels in grey stone and concrete.. 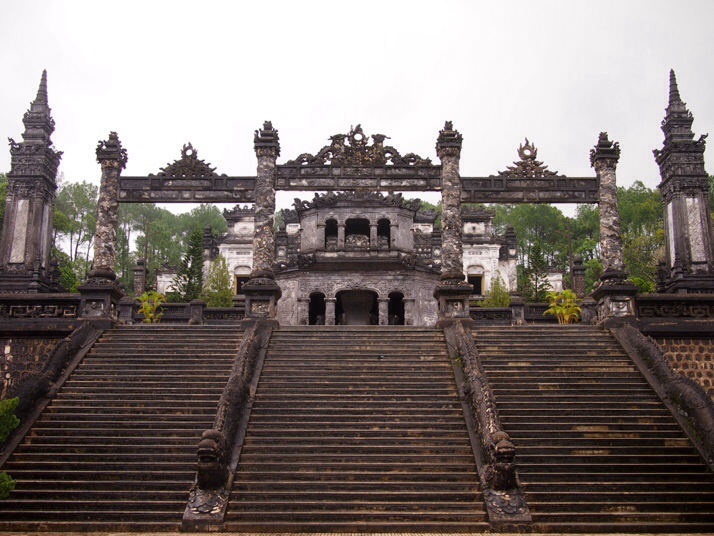 The entrance stairway to the Tomb of Khai Dinh

.. that is, until we got into the tomb itself on the 5th level, where we found the interior covered with the most spectacular mosaics.. 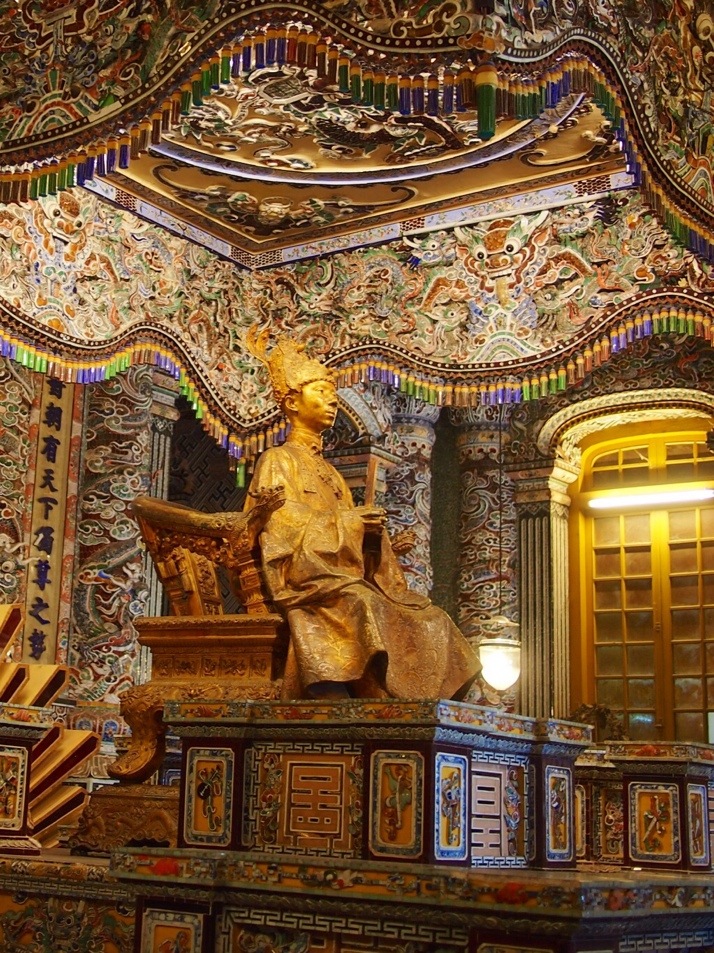 Gilt bronze statue of the man himself – Khai Dinh, the penultimate emperor of Vietnam. His remains are interred 18m below his likeness

The second was the Tomb of Minh Mang, which was my favourite because it was so serene – like walking through a park. The layout of the tomb includes two lakes which are reached after ascending up to and down from 3 pavilions. 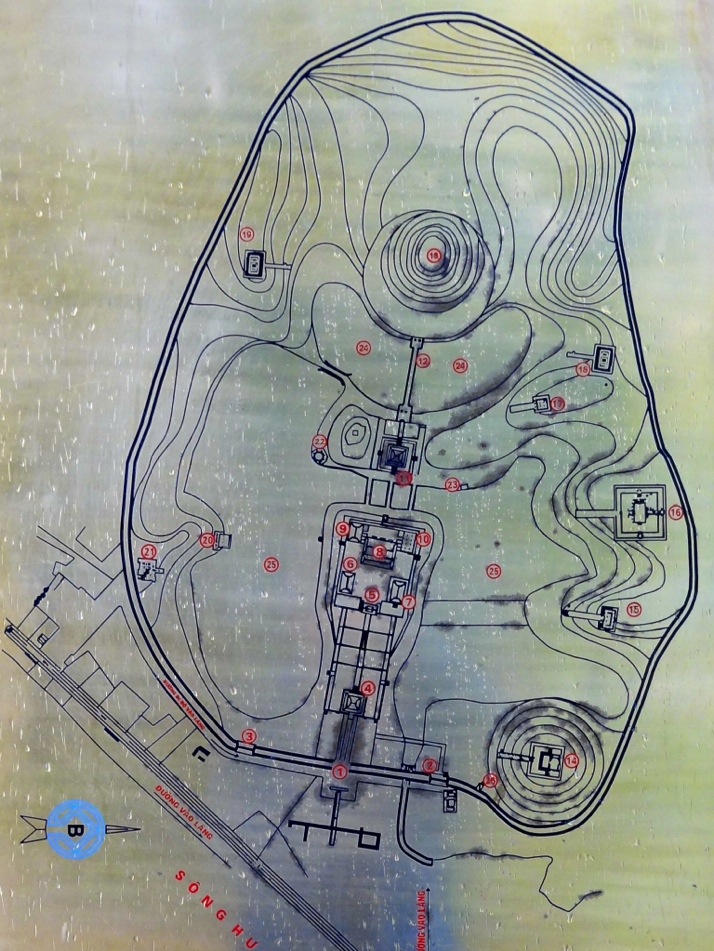 Layout of the Minh Mang tomb. Entrance is from the East (bottom of the map) 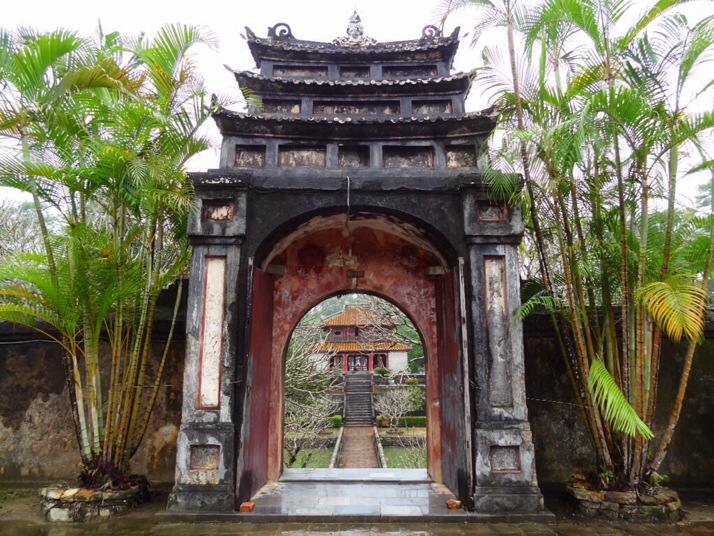 We weren’t able to climb the final steps up to Minh Mang’s Sepulchre (#18 on the map) because it’s only opened one day a year on the anniversary of his death. We’d had enough of steps by then anyway, so we walked back along the lakeshore.

The final stop was the popular Tomb of Tu Duc, which the Emperor used for R&R before he died. As such, it has a lot of extra buildings to house staff during his visits, which, according to our guide book were mostly women – he had 104 wives and countless concubines!

We found it wasn’t in as good a state of repair as the other tombs we’d visited, but it did have a boating lake complete with small island that the Emperor was find of spending time on. The Emperors tomb, along with those of another Emperor and Empress are very modest compared to Khai Dinh, as they’re simple stone sarcophagi surrounded by 6 foot high walls. Of the 3, Tu Duc is the only one that isn’t actually interred here. 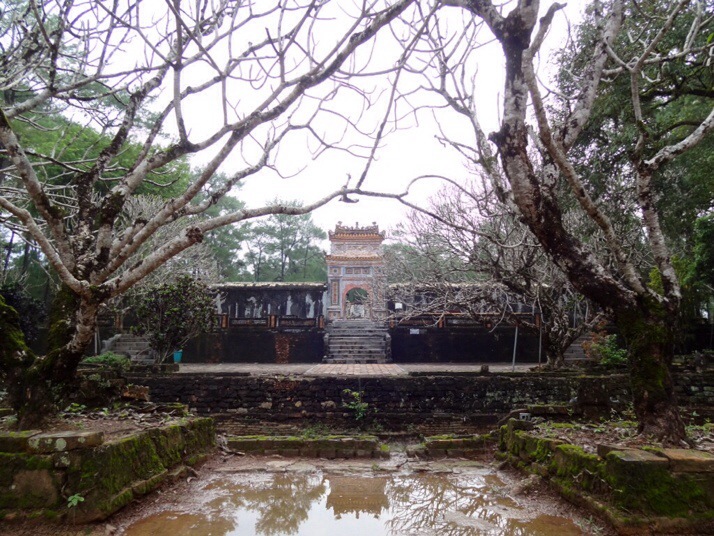 View of Tu Duc’s Burial Tomb enclosure. Unlike Minh Mang’s Tomb, you have to walk around the crescent-shaped lake in front 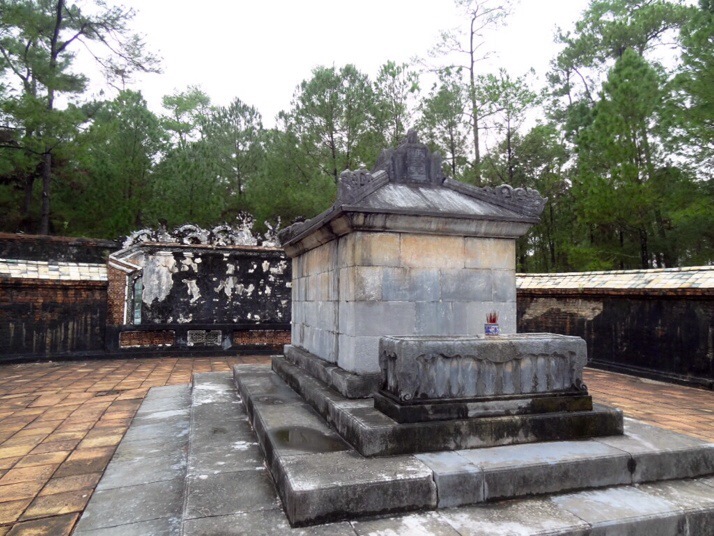 After a day with Emperors, we decided to eat like one at the splendid Le Jardins de la Carambole. 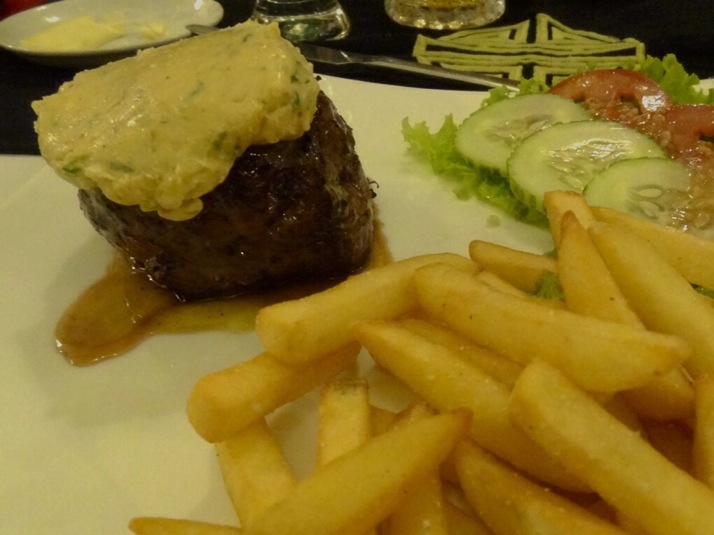