In Russia May 9th is a holiday, Victory Day commemorates the end of the Great Patriotic War (as the Russians call World War 2). In Moscow the day is marked by a big military parade in Red Square (we saw the end of some of the rehearsals for this earlier in the week), and celebrations throughout the day at Park Pobedi (Victory Park). 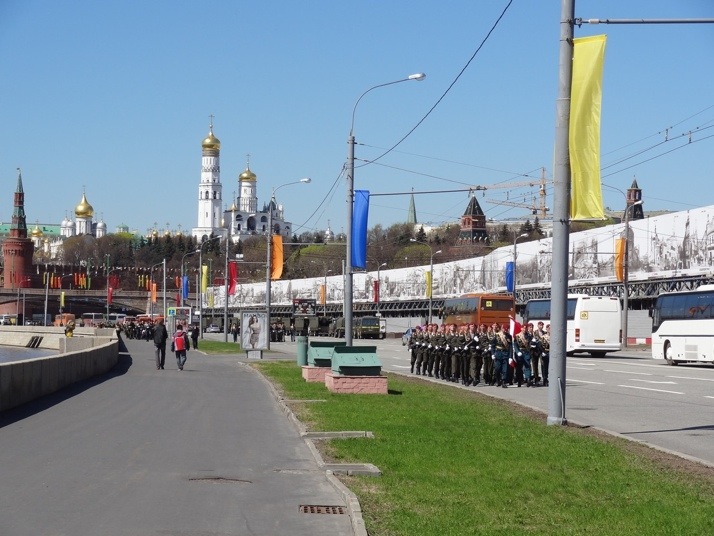 Soldiers after parade rehearsals with the Kremlin in the background

The day was sunny and we’d heard that there would be a concert in the park so we packed a picnic and headed off on the metro. As we arrived, we noticed lots of people carrying flowers (Russians seem to buy a lot of cut flowers generally and we have seen several 24 hour florists…). War veterans (presumably mostly from later conflicts than WW2) go to the park in their uniform and medals and members of the public give them a flower or two from their bunch, thank them and sometimes get their photos taken together. It seemed a really nice and touching way to remember what the veterans had gone through. Other flowers are placed on the various memorials around the park. 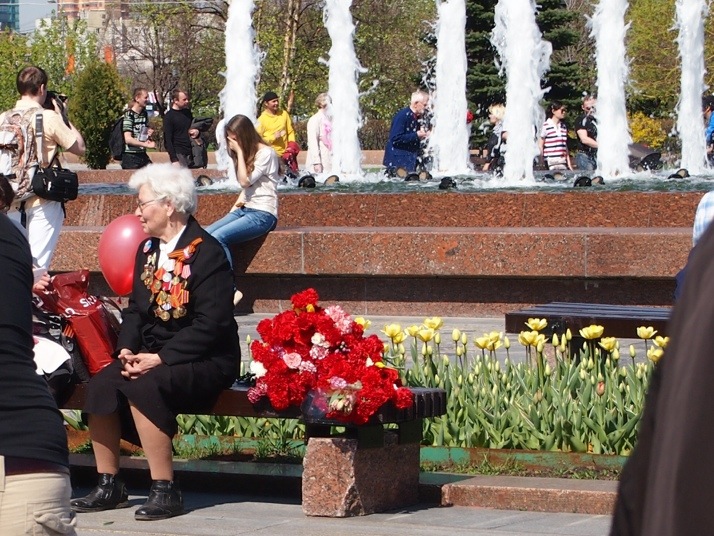 Veteran with a huge bunch of flowers 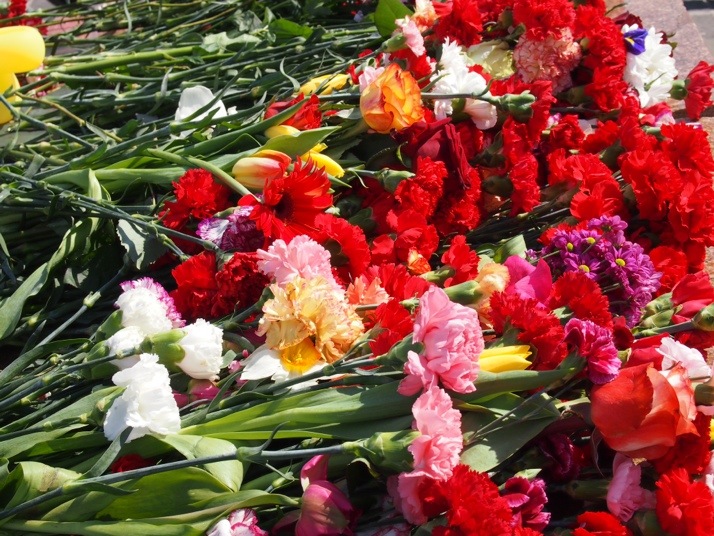 The park is pretty big, and as well as lots of grassy areas contains a small church, a large memorial obelisk, and a museum of the war. The military vehicles and fortifications part of the museum was open yesterday and we had a wander around with the crowds. 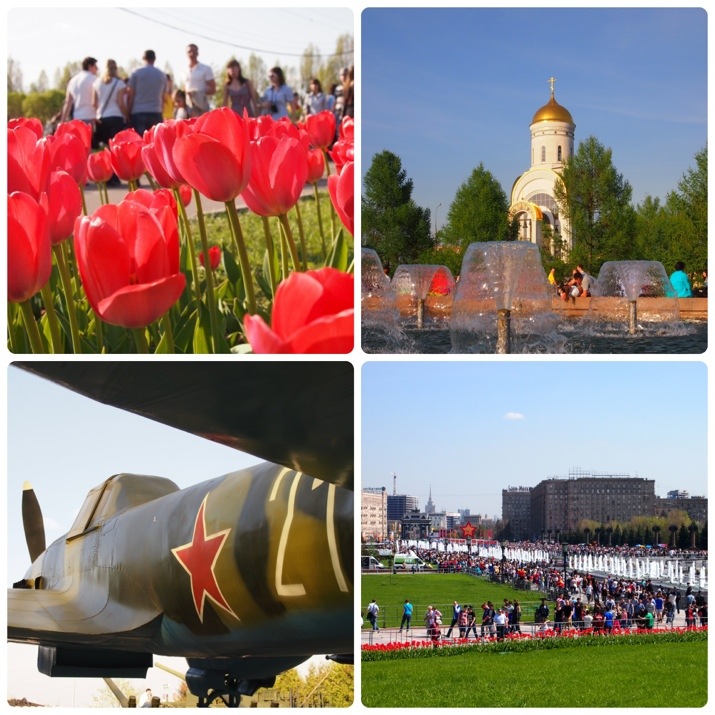 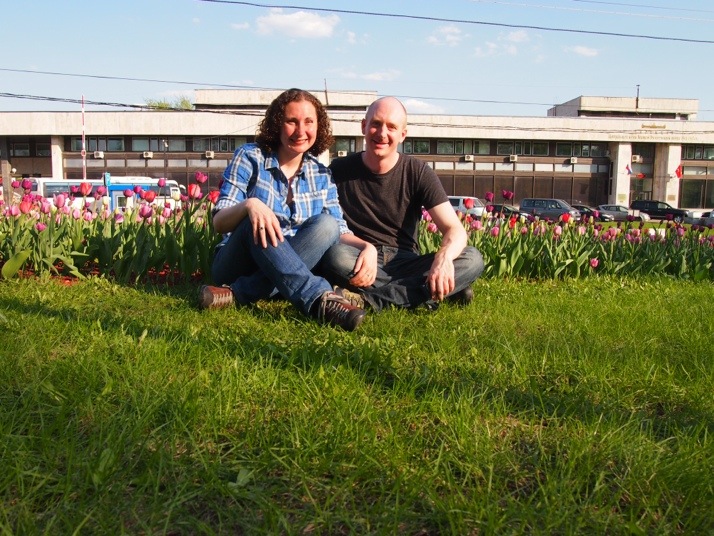 Us enjoying the sunshine

From 2pm there was live music on a stage in the park beginning with a concert by the orchestra from the Mariinsky Theatre in St Petersburg with their conductor, Valery Gergiev, and solo pianist, Denis Matsuev. Afterwards there were performances by military choirs and patriotic songs by (presumably well known) Russian singers. 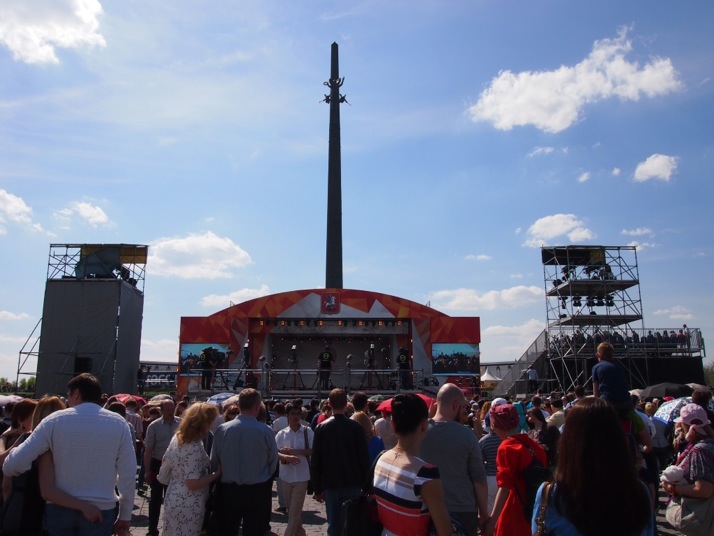 The celebrations ended with a firework display at about 10pm and us wondering how to get back across the city to our hostel. The huge numbers of people in the crowd mean that the metro stations around the park are closed down for the evening which we hadn’t realised in advance. Not having braved the local bus system in Moscow and being a little afraid to do so in the dark without knowing at least which number bus might take us in the right direction, we opted to walk with the crowd towards the city centre in the hope of finding an open metro station. Having walked for about an hour and past 2 shut stations, we paused and reconsidered the buses (nope still no good, we didn’t even recognise the listed destinations), so were left with either a 2 hour walk home, or trying to find a taxi which wouldn’t rip us off… Still unsure, we noticed a stream of people seemed to be going down the subway steps to the nearby metro station, so we followed – yay the metro was being reopened at midnight! 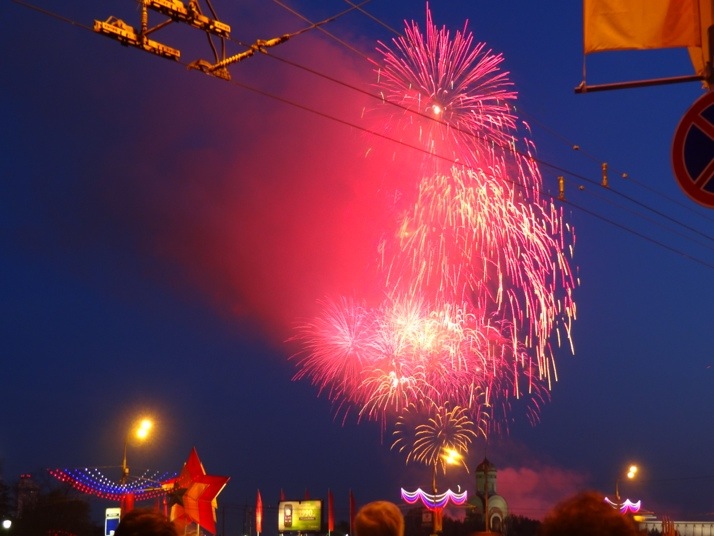 We arrived back at our hostel intending to drop straight into our beds, but the owner had just returned from holiday and we were invited to join him and some friends in the kitchen. It would have been rude to refuse, so we stayed up for tea, chats and a trip to the apartment block roof for a view of nighttime Moscow before crawling into bed at 2.30am – phew, what a long day! 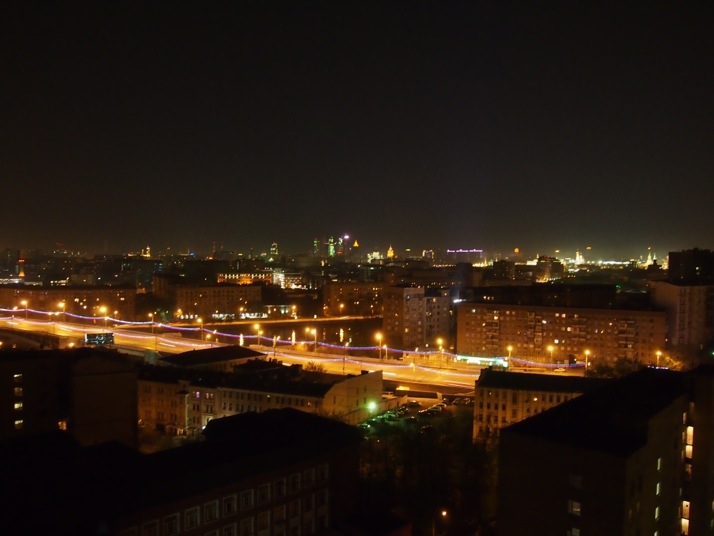 Moscow by night from our apartment block roof

5 thoughts on “Victory Day in Moscow”