The markets in every town we’ve stayed in Sicily have been fantastic. They’re full of interesting sights, lots of bustle and fresh local produce. We’ve stayed predominantly in apartments which it turns out is usually a cheaper accommodation option than guesthouses or even hostels and also allows us to save money on food by cooking for ourselves most of the time. In turn this means that we can more fully immerse ourselves in the markets by shopping there too. 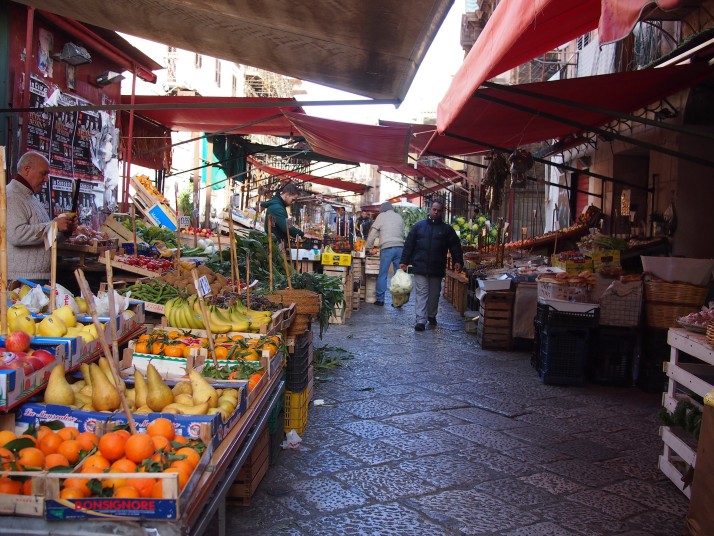 Markets tend not to be in a large building or an open square but arranged through streets. They consist of a mixture of stalls, shops, and stalls spilling into the street as extensions of shops. 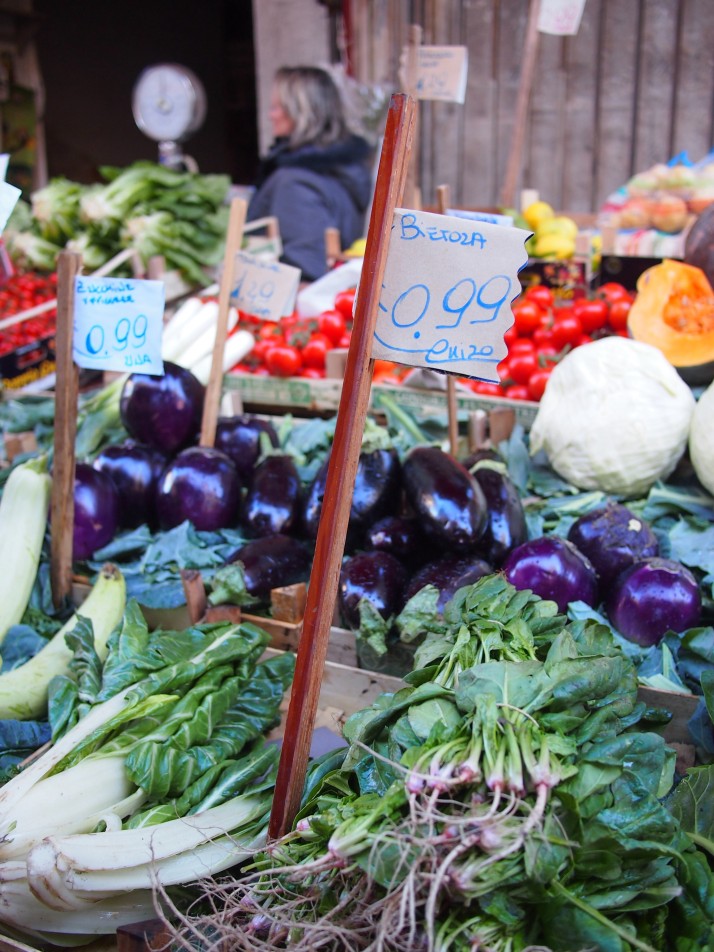 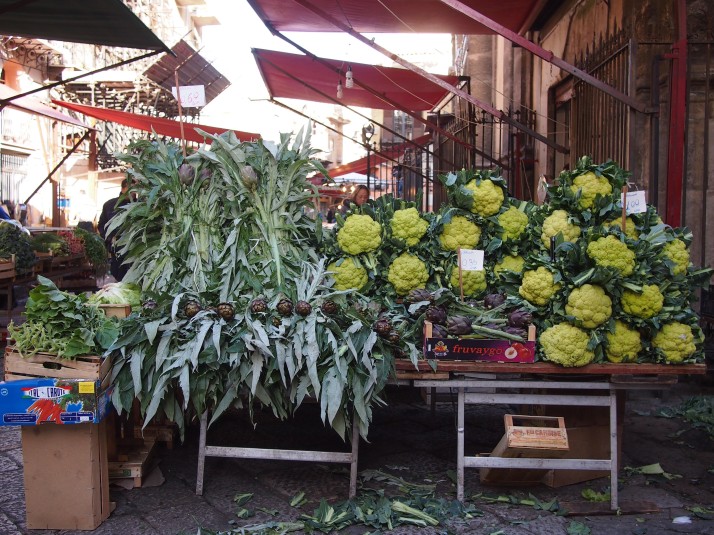 In the winter months, both globe artichokes and cauliflowers are abundant. Confusingly the Italian name for these green cauliflowers is ‘broccoli’! There are many different kinds of tomatoes available in the Sicilian markets – ‘normal’ round ones, plum tomatoes, cherry tomatoes (both round and plum shaped), and these ribbed beef tomatoes 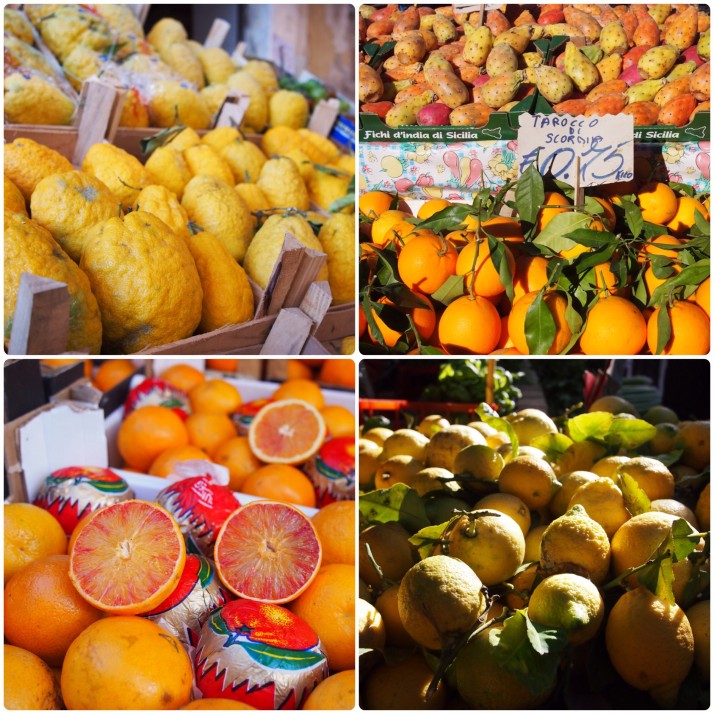 One of the main crops in Sicily is citrus fruits and winter is the main season. The markets were full of different varieties (clockwise from top left): knobbly citrons are used for making candied peel; we like that the oranges are sold with leaves attached (you can also see prickly pear fruits in this photo); lemons; blood oranges 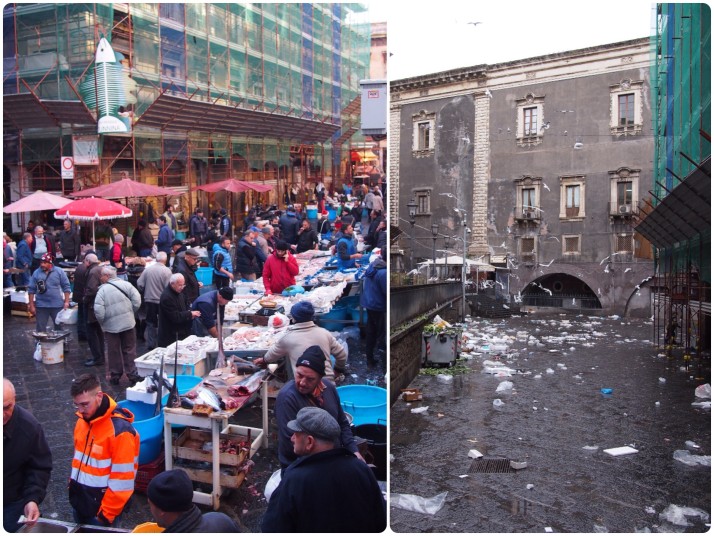 The Fish Market in Catania – bustling in the morning, just a few drifting carrier bags and gulls picking up scraps in the afternoon 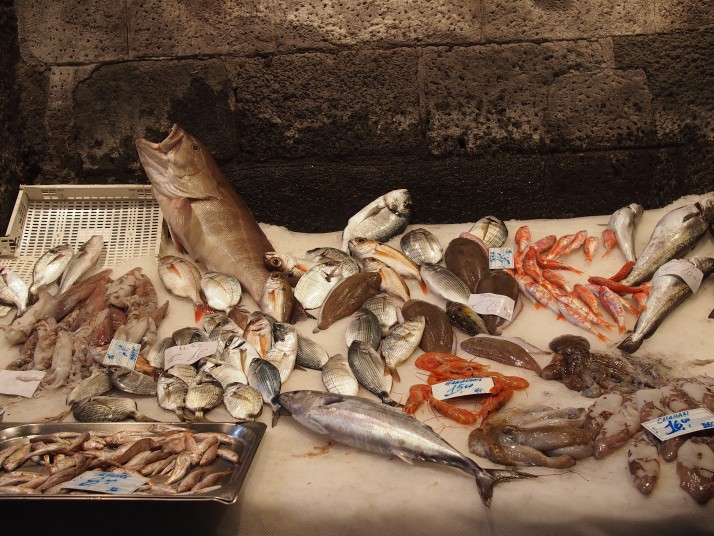 Swordfish was one of the most common (and easily recognised) fish that we saw in Sicily. We were surprised by how big the individual fish are 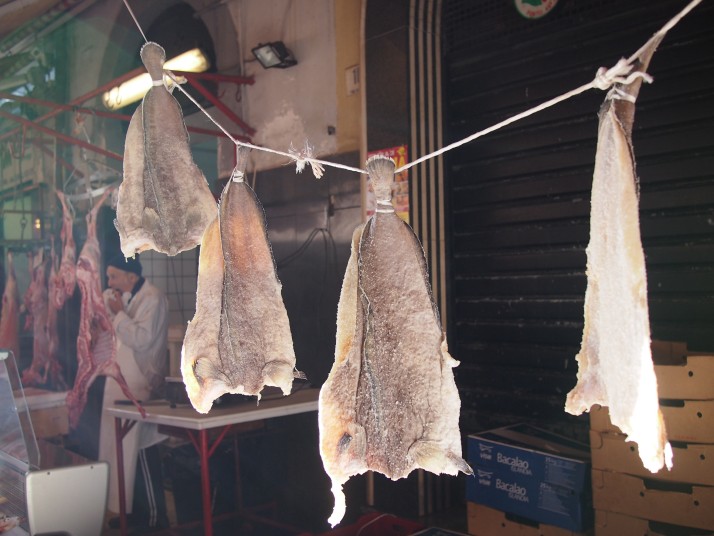 Salt cod (baccala in Italian) is a Sicilian specialty. These fillets are drying in the sun but we saw it for sale completely dry, with a salty crust and stiff as a board, or pre-soaked for shoppers who hadn’t planned so far ahead 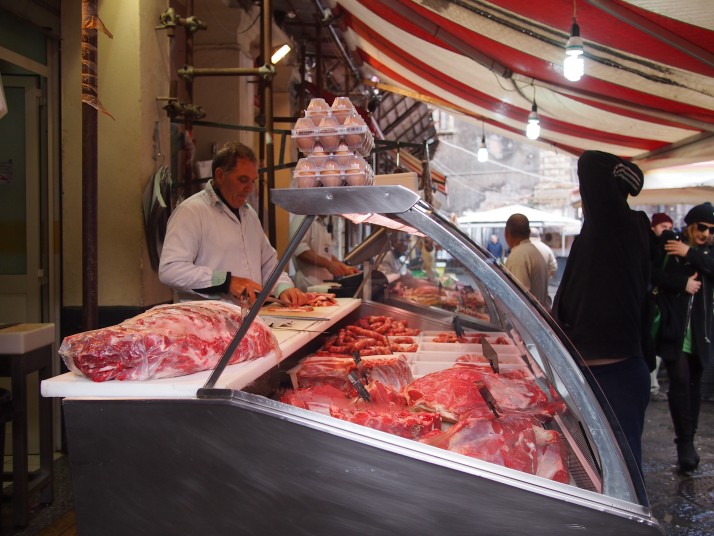 We enjoyed watching the butchers preparing the meat. They also make delicious sausages and parcels of meat or chicken stuffed with, for example, pistachios or ham and cheese before being neatly tied with string or assembled onto skewers 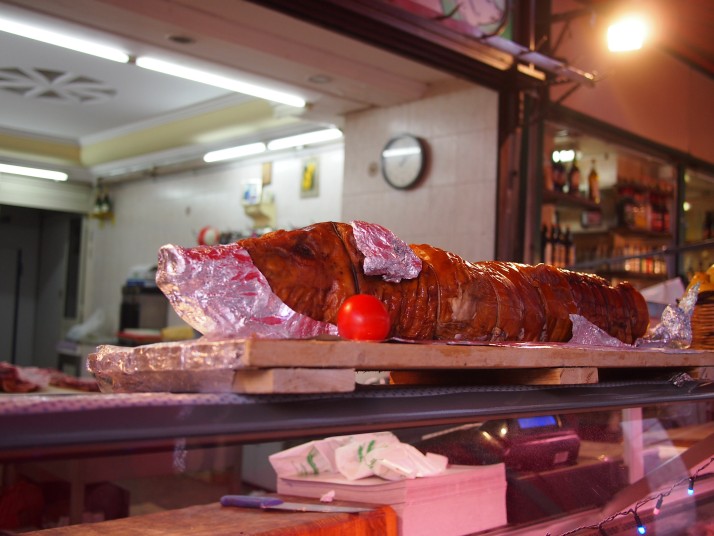 Delicatessens sell a range of cheese as well as cured and cooked meats. We found a good trick was to ask for our parmesan cheese to be ‘macchinato’ – the shopkeeper would then weigh the block before putting it through a pulverising machine behind the counter. Much fresher than the dry parmesan dust from the supermarket and better than we could manage at home as none of our rental apartments was stocked with a grater 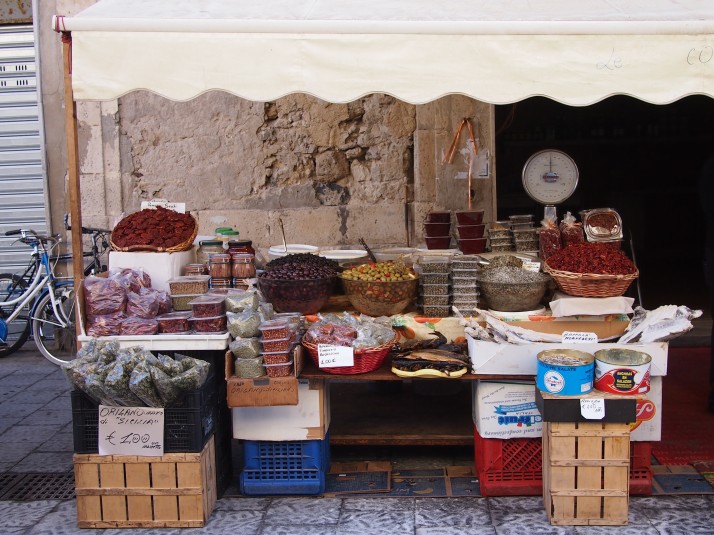 I love this stall as it’s packed with so many Sicilian specialties – sundried tomatoes, dried herbs and chilli flakes, olives and salted capers, preserved fish (salt cod, smoked herrings and anchovies both salted and jarred in olive oil) 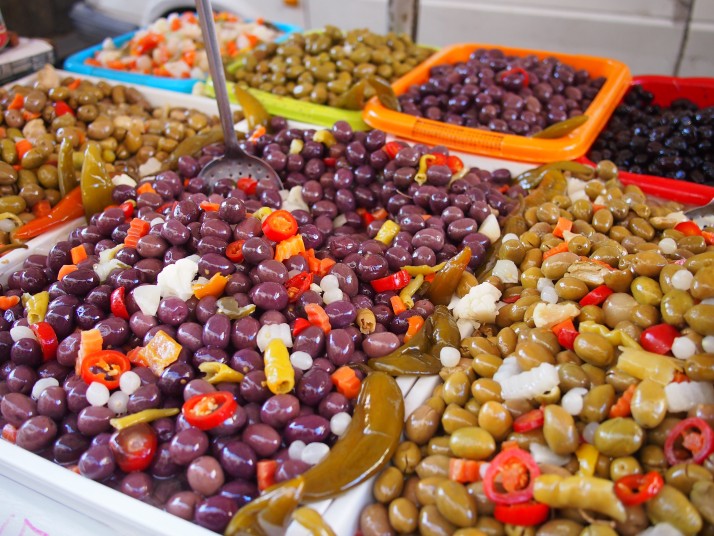 The owner of this olive stall in Siracusa thrust a spoon containing two olives towards us and said in his incredibly gravelly voice “Eat this. It’s good.” He was right 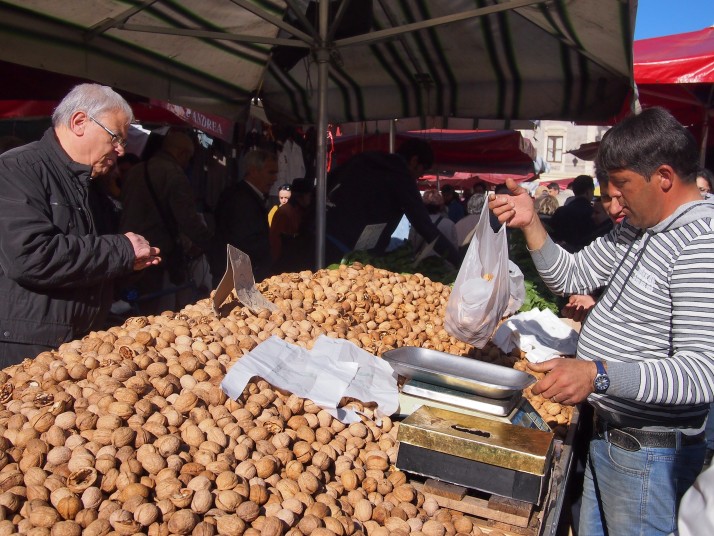 Walnuts are also locally grown. This stall was in Catania Perhaps unsurprisingly for a country which has influenced the whole world’s coffee culture, freshly roasted and ground coffee is easy to come by 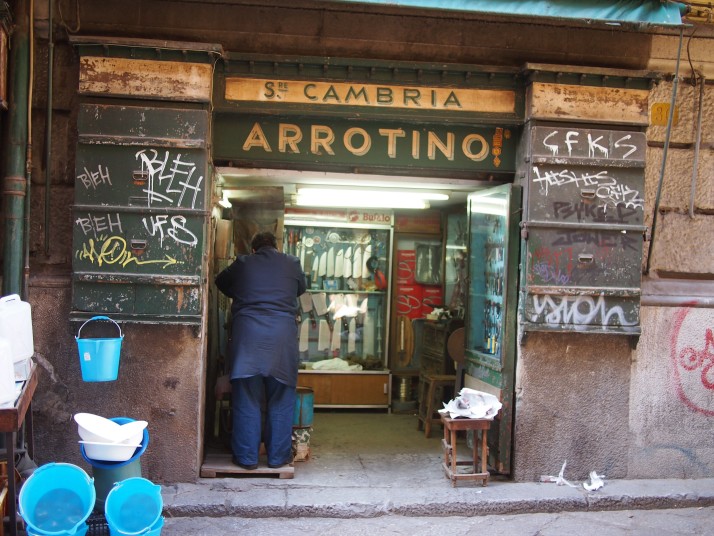