We originally planned to visit Kharkhorin for just 2 nights (1 full day), but fate in the guise of the Naadam Angel had other ideas. Naadam is a festival of Mongolian games (wrestling, archery and horse racing) which is held in the capital Ulaanbaatar on 11th/12th July and around the rest of the country on various dates in July and August. Our hope was to get tickets for the capital’s opening ceremony. All of the tickets reserved for tourists had been snapped up by tour operators, so our only option was to queue with the locals on the 6th. We arrived at about 10am to find a reasonably sized queue although the doors weren’t open. After a short while someone told us that tickets weren’t being sold on the 6th after all, it would be 7th. It seemed a bit strange that there was still a queue but we went off to the bus station to buy our tickets for Kharkhorin on 8th and resolved to get there early for opening ceremony tickets the next day. On arrival at 8am we found a longer and more organised looking queue than the day before and joined the end. It is probably the slowest queue that I have ever encountered. Ticket sales didn’t begin until 10am, meanwhile it was a colder day than usual so first I ducked out to get us coffee and then Andrew dashed back to the guesthouse for jackets (all of the locals were jumping in and out too and there was a reasonably honourable system of place saving). The queue moved very slowly until about 1pm when it seemed to grind to a halt. After a while someone told us that it was lunch break – unbelievable! When we started moving again at 2pm it was slower than ever and with rumours circulating that there were only 300 tickets left (and each person could buy 4 tickets), our stomachs rumbling as we’d only packed apples as a snack and queue shoving getting more frequent we decided at 3pm to give up. 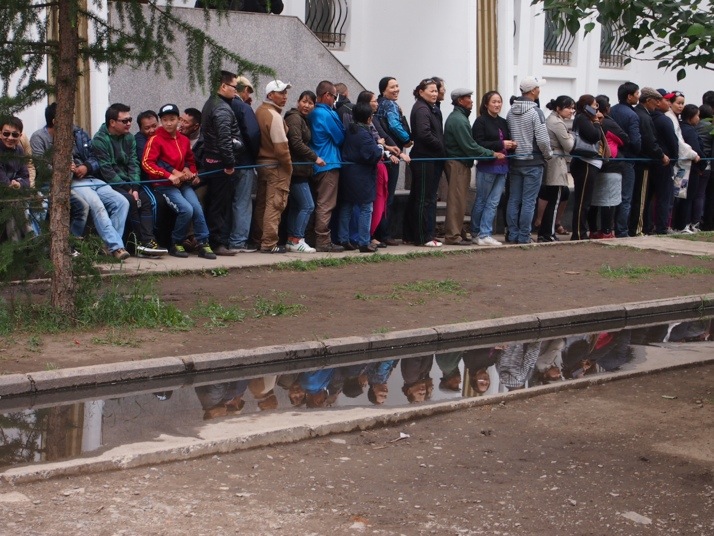 The slowest queue ever?

Meanwhile we’d emailed a guesthouse in Kharkhorin for availability and in their reply they mentioned that it would be Naadam there on 8th/9th. With our hopes for the opening ceremony in Ulaanbaatar dashed, we thought that maybe we could stay there for an extra night with one day of Naadam and one day of sightseeing. Sounded like a plan coming together…

We’d heard terrible stories about the roads in Mongolia and when, shortly after leaving the city, our bus pulled off a smooth 6-lane highway onto a very hilly dirt track with the rest of the traffic we thought we were in for a hellish 8 hours. Fortunately this was just a temporary detour where the main road was being resurfaced and we soon got back onto the proper road. We both agreed that we’ve been on much more uncomfortable bus journeys. 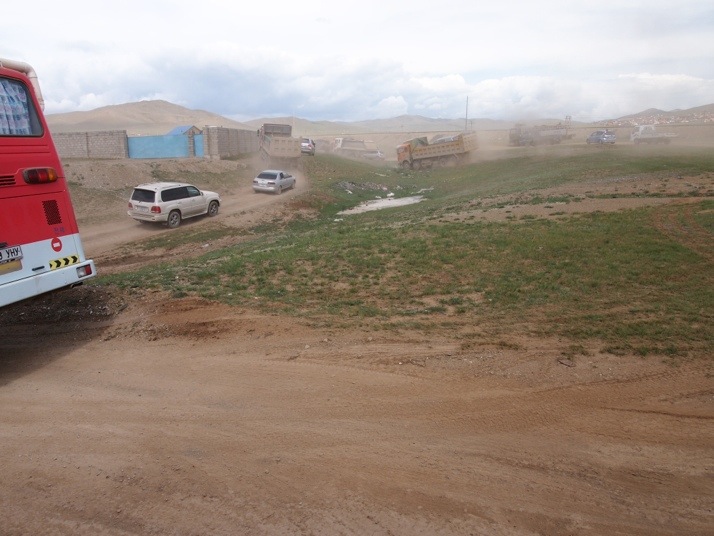 Taking a detour from the main road outside Ulaanbaatar

Kharkhorin is a small town, not very pretty, but in a beautiful location. It is built near to the site of Chinggis (as it is written in Mongolia, not Genghis) Khaan’s capital of the Mongolian Empire, Karakorum. Not much remains of the ancient city’s ruins but a beautiful Buddhist monastery called Erdene Zuu was built on the site in the late 16th century. Its boundary wall is supposed to contain 108 stupas (although we only counted 100), a sacred number for Buddhists. The bus arrived late in the afternoon, so after dropping our bags off we walked the 2km to the monastery to catch the sunset. Stupas in the evening light 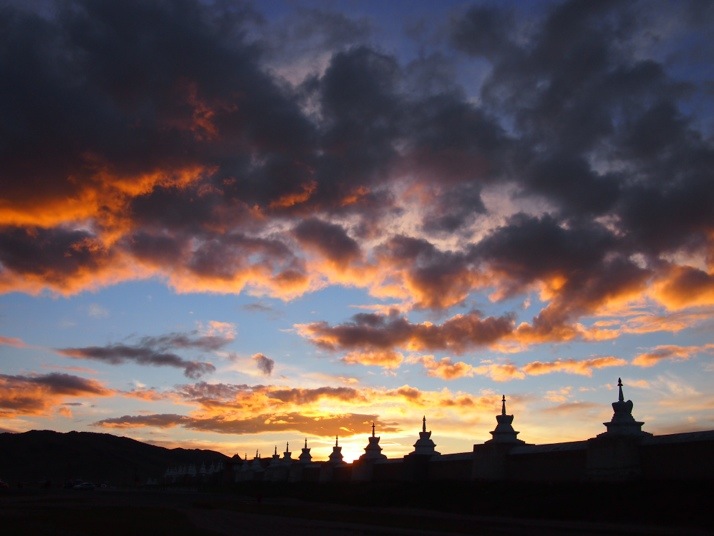 After a night disturbed by barking dogs, easily audible through the walls of our shared ger, we rose to glorious sunshine and set off through town to the Naadam fields. The first things we saw when we got there were men and boys milling around on horseback, lots of ger ‘restaurants’, and eagles circling overhead – it felt a bit like stepping back in time! 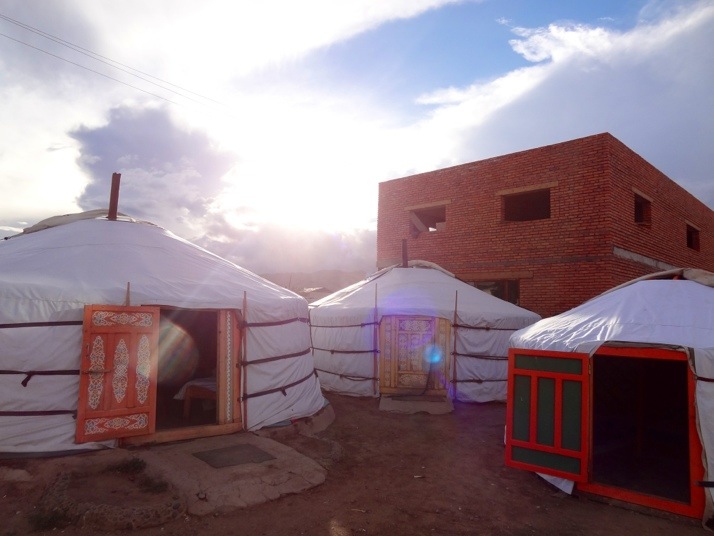 The gers behind Morin Jim cafe where we stayed 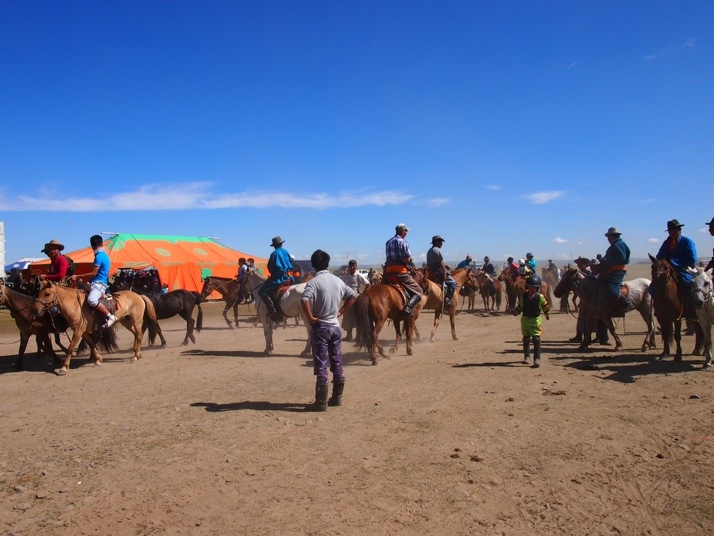 Looks like we’ve ended up in the Wild West…

The day started with some traditional music played by a quartet on horse head fiddles (Morin Khuur), surprisingly to us it sounded quite a lot like Gaelic fiddle music. This was followed by traditional dancing by some local girls in costume, and then the wrestling began! 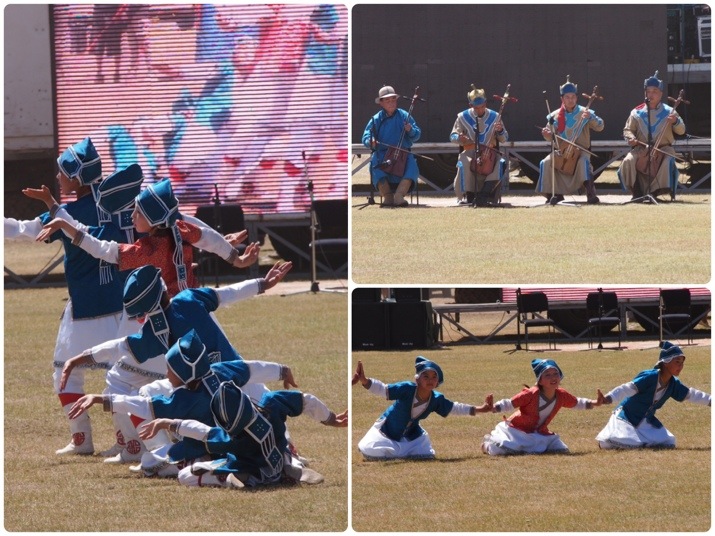 I don’t know much about wrestling from any other cultures, but Mongolian wrestling is quite a ritualised sport. The combatants enter the field dressed in shorts, a small jacket, Mongolian boots and hat. Their hats are taken by the two referees and they each do a phoenix dance before locking together in combat. The match ends when any part of the upper body, knee or elbow of one of the wrestlers comes into contact with the ground. Sportsmanship dictates that the winner must then help the loser to his feet and the loser passes under his arm to signal the end of the match. At this stage the winner does another phoenix dance around the flags at the end of the field. We got quite into it, some matches were really quick but others went on for 15 or 20 minutes, with 2 or 3 matches going on at the same time. 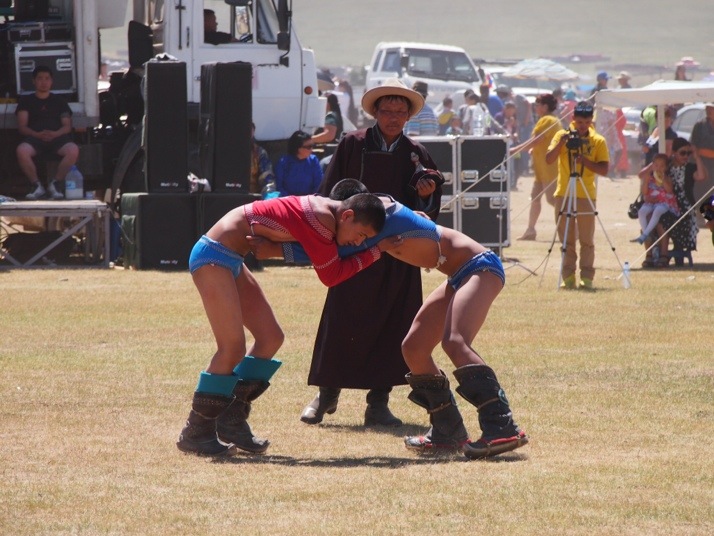 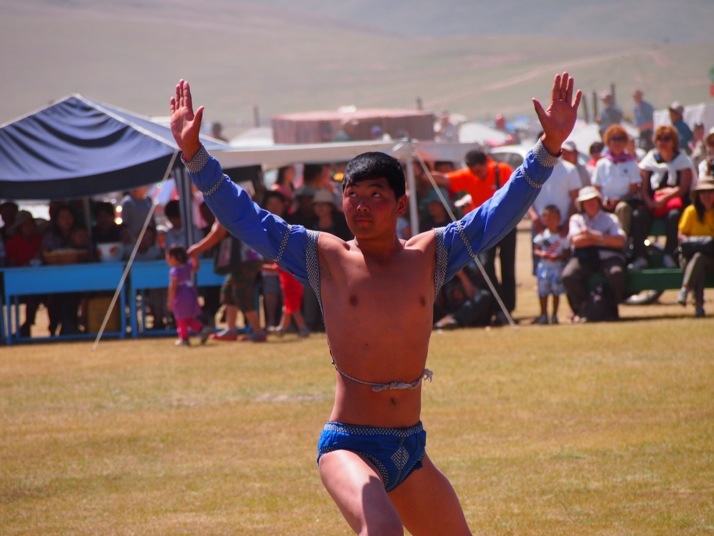 In the middle of the day a mass exodus started away from the ring and across the field, we thought we ought to follow and soon worked out that a horse race was about to end. Apparently the easiest way to get a good view is to ride your horse up to the edge of the track and view from there which meant that we pedestrians had to stand with a horse breathing down our back in order to see what was going on! The race jockeys were all children, riding with an amazing level of skill. In the afternoon the final wrestling rounds took place and we realised that we had been watching the junior levels in the morning. The men wrestling were much heftier with a physique which might not be considered fit for most sports but undoubtedly proved an advantage to being thrown over. 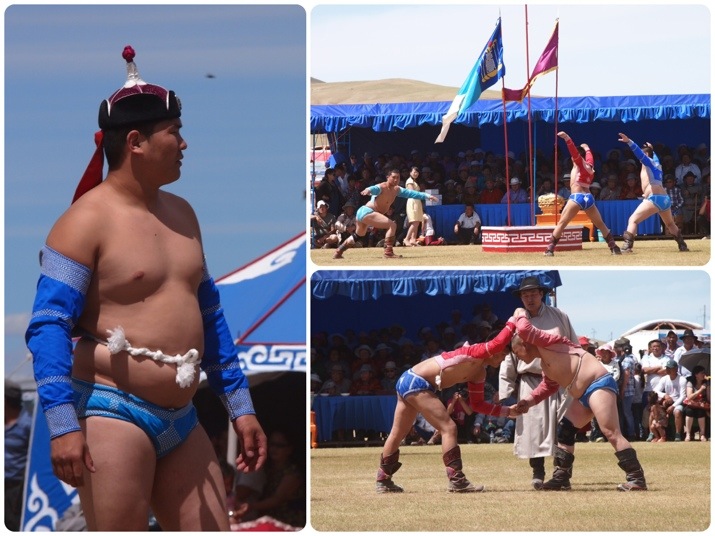 As we walked back to the guesthouse having thoroughly enjoyed the day, we agreed that we were quite glad that we hadn’t managed to get tickets for the Ulaanbaatar opening ceremony as we surely wouldn’t have been so close to the action in the capital’s stadium. About halfway back it began to rain and didn’t stop all night. This had the advantage of blocking out the barking dogs so we got lots of sleep and woke up much later than we had intended.

Erdene Zuu monastery, along with most other monasteries in Mongolia, was badly damaged by the Stalinist purges in 1937. All but three of its sixty temples were destroyed, and the monks were either killed or sent to gulag camps. Since the fall of communism in Mongolia in 1990, the monastery again functions as a religious site as well as housing a museum, and temples are slowly being rebuilt with the help of donations.

Entry to the museum includes a free guided tour (great value for money as the entry ticket is only about £1.60). Our tour group consisted of us and three hilarious Dutch men who when our guide checked whether we understood (pretty much after everything she said) didn’t just politely nod but would make her explain again if they hadn’t caught what she’d said. Admittedly her English was quite heavily accented and so to their foreign ears it probably wasn’t easy to understand, but when in about the 4th building after another repeat she heaved a huge sigh and everyone burst out laughing she had to join in. 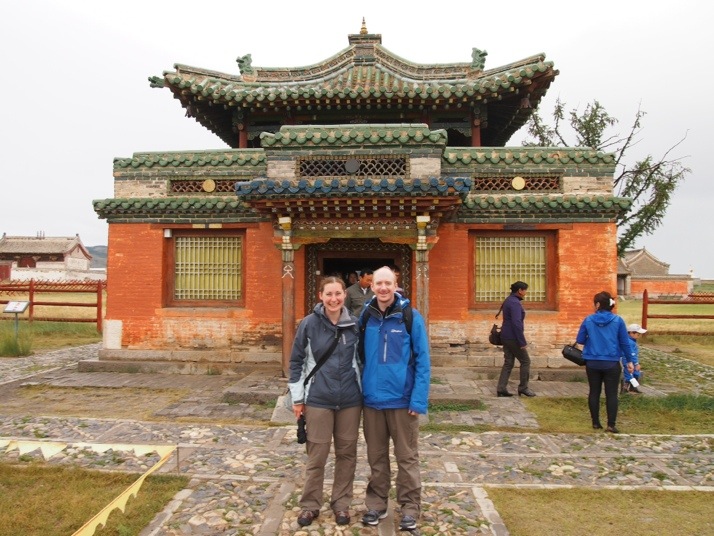 Us outside the museum entrance Our guide, desperately trying to explain… Clockwise from top left: Inside one of the temples, cymbal, wall painting, temples from outside

There was much more to see inside the monastery walls than we had expected given what we had read about its destruction. A short walk to the north of the monastery is another of the town’s most famous sights; one of the stone turtles which marked the four corners of the ancient city of Karakorum. Having read the first three books of Conn Iggulden’s excellent Conqueror series, we couldn’t pass up the chance to see something that Chinggis himself might have touched. 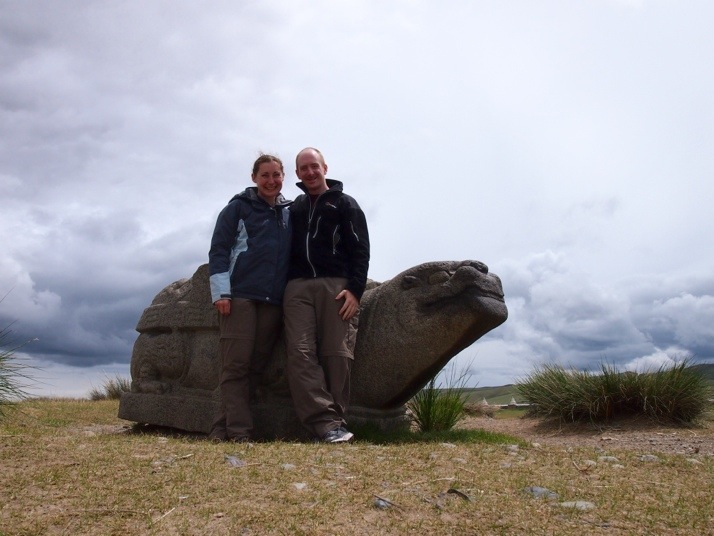 We ended the afternoon with a visit to the swanky new Karakorum Museum and a long walk to the 2004 map monument which turned out to be not nearly as impressive as the view from the top of the hill.