As we had just over a week before our friend Jo arrived to join us travelling south through Vietnam, we decided to head north-west to the once small hamlet of Sa Pa. Nowadays it’s a bustling hillside town full of hotels, hostels, restaurants, and knock-off North Face shops. Rumour has it they’re planning two 5-star hotels, a golf course (in this terrain?!), and a helipad. That’s progress, I guess.

We took the “hard sleeper” overnight train from Hanoi to Lao Cai, and a hotel transfer for another hour up and down the twisty hills. In China, hard sleeper means there are six people in your compartment – compared to four in soft sleeper class – but in Vietnam, hard sleeper means a worn in 1inch-thick mattress over a solid metal frame. We found it wasn’t as uncomfortable as it sounds, and we got a pretty decent nights kip. 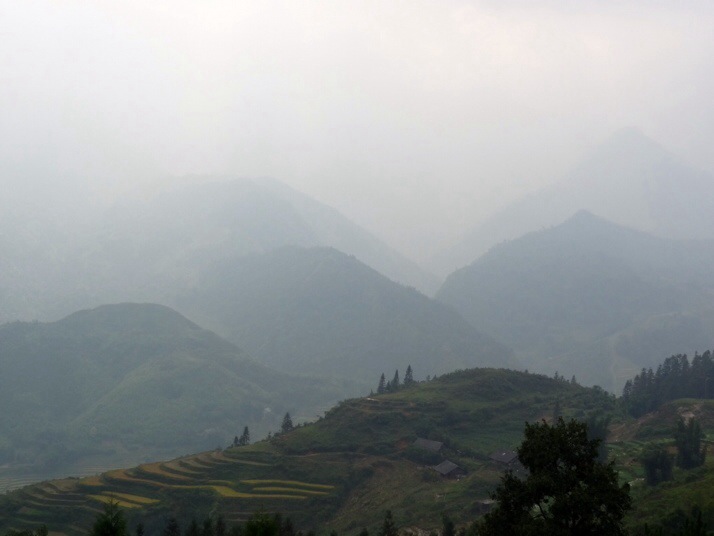 The misty hills of Sa Pa. Somewhere out there is Mt. Fansipan – the highest point in Vietnam

Sa Pa is surrounded by small, local farming villages inhabited by diverse native peoples and our hotel organises easy-going downhill saunters through paddy fields to visit a few of them. The tour started by picking up other guests from 2 different hotels in town, and each time we also picked up what I can only refer to as a “hustle” of local H’mong women. When the tourists were sufficiently outnumbered, say 3 to 1, we set off towards the H’mong village, and the good-natured hustling began. 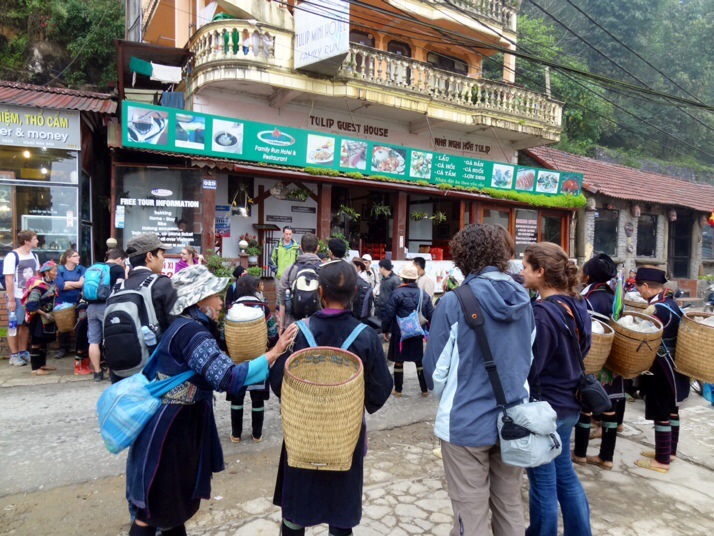 The local H’mong women, pleasantly pushy in their sales technique and won’t take “no” for an answer. If you’re persistent, they might let you off with a “maybe later?”

As we left Sa Pa, the clouds made good on their threat and a downpour ensued. Nothing could dampen the spirits of the locals and guides, and we were actually quite pleased to have them along as they helped us all through the slippier bits – their well-worn flip flips suddenly seemed more appropriate in the mud, paddy fields and streams than our western hiking boots which would need more than a quick wash in a puddle to get clean. 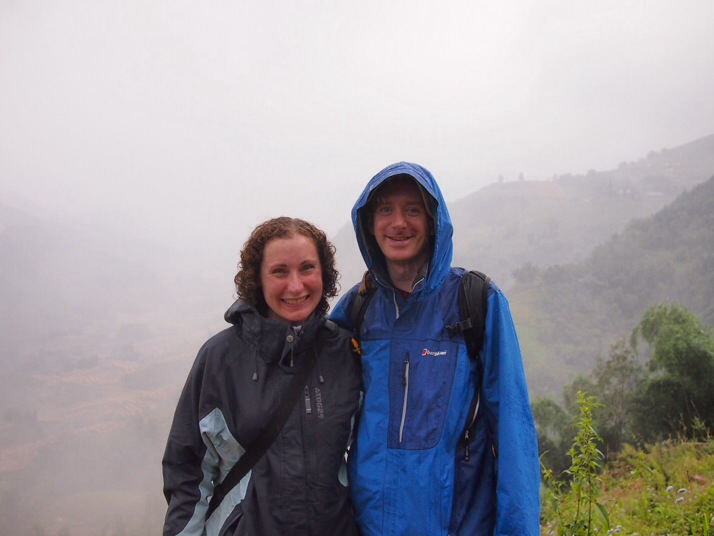 It was a little bit wet.. 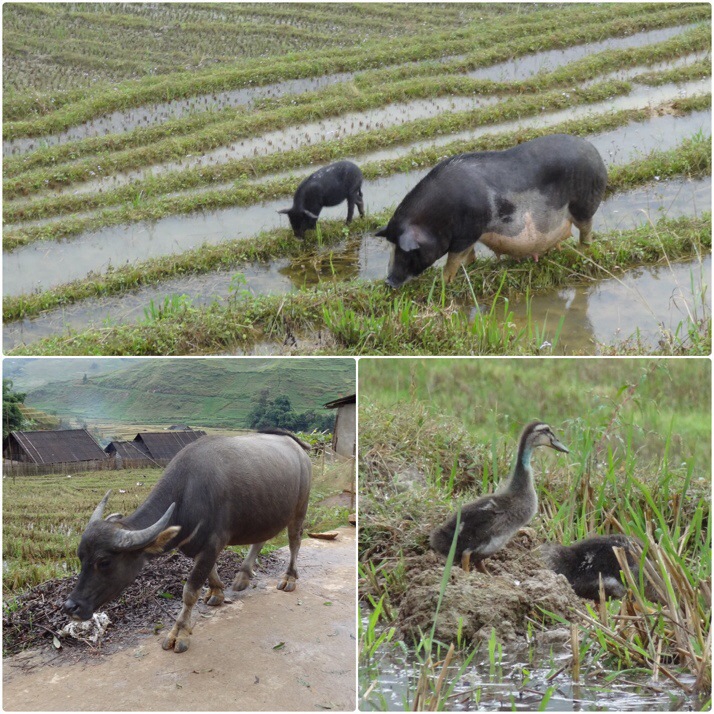 ..which suited the pigs, ducks and water buffalo.. 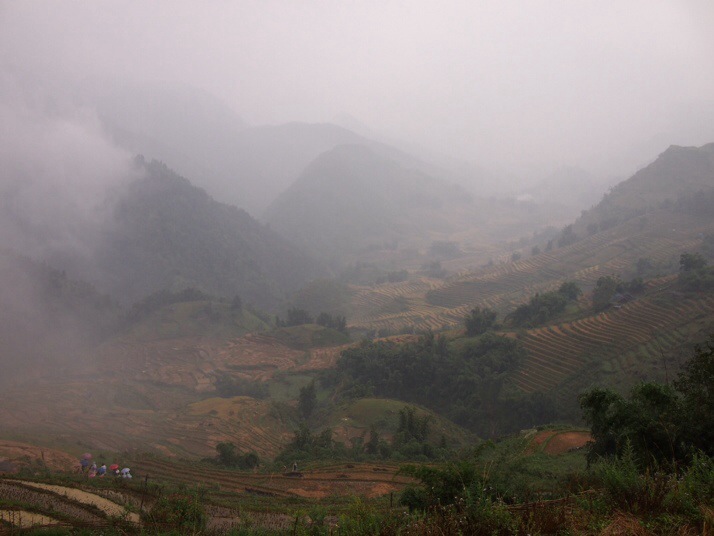 ..but even in the rain, the scenery was fantastic

Maybe it was because of the rain and the slippery footing keeping our heads down, or more likely because I was deep in conversation with Frank – one half of a French couple we later had dinner with – but I missed the first two villages, Y Linh Ho and Lao Chay. Or maybe I saw them but I didn’t know it because we didn’t pass through them.

Before the last village of the trek, we reached the bottom of the valley and stopped for lunch. It’s safe to say we were all kind of dreading it a little bit, as we knew the assistance we’d received on the way down was going to be used to guilt-trip us into buying their lovely hand-made and embroidered wares. “You remember me, I helped you?”, “yes, thank you, but..” It took a lot of effort, but we politely resisted.

The final village of Tavan was more how I’d imagined the trek would be – we walked right through the middle of it and went inside a couple of the houses to see how the people live and work. 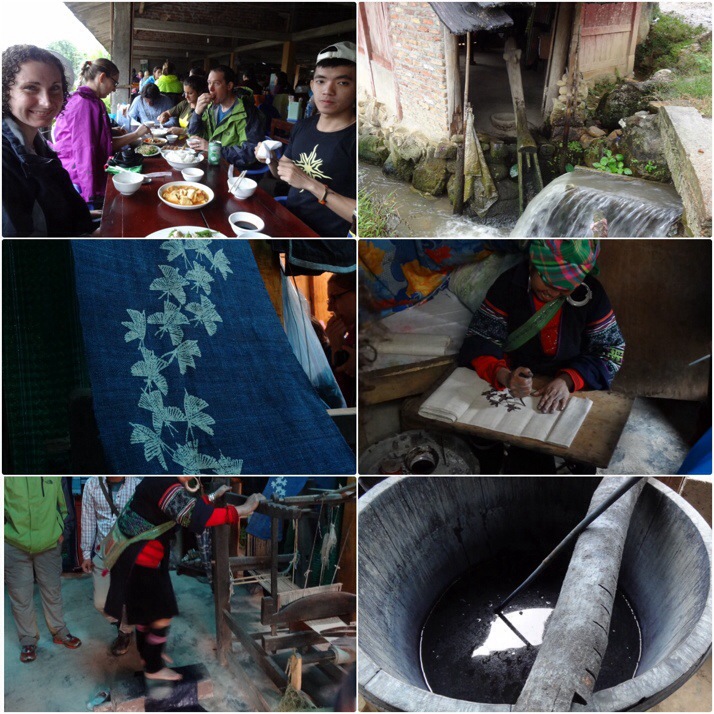 Clockwise from top-left: Lunch (the food was great); Ingenious use of water power to bash dry rice into rice flour; H’mong woman demonstrating pattern making with beeswax on hemp cloth; The famous deep indigo dye that stains their clothes (and hands); How they smooth the rough material with two stones and a balancing dance; The finished article

The trek ended with a surreal moment. As we crossed a footbridge to the car park to catch a lift back up into Sa Pa, we could hear music.. then we spotted a guy in a dinner jacket perched on a ledge miming to a ghetto-blaster. Neither of our guides knew who he was, so we don’t think we can say we’ve seen someone famous! 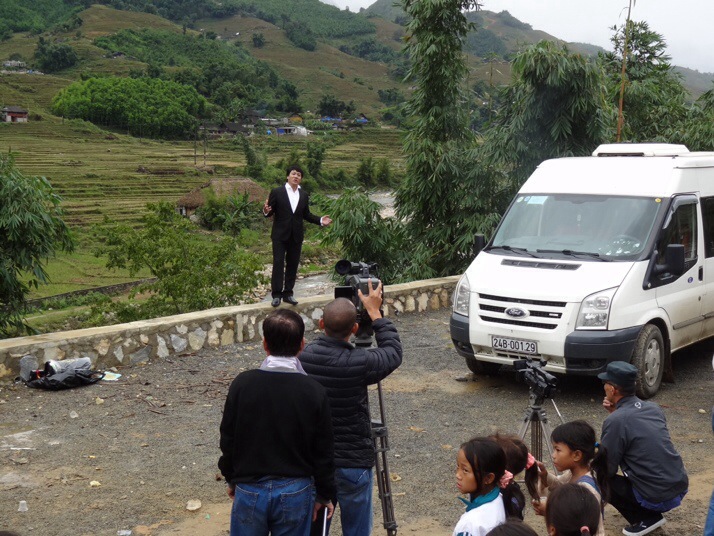 In stark contrast to the gloomy, torrential day before, we woke to blue skies and glorious sunshine. Perfect weather for a bicycle ride through the hills. Dropped off at the highest pass, raring to go

Panorama of the view. Stunning

The valley views, stepped hillside and rocky cliffs whizzed by as we twisted and turned our way for 30km downhill towards Lau Chau. It was great fun on a bicycle – especially as it was nearly all downhill – but I’d love to do it again on a motorbike!

Our support driver met us for lunch in an otherwise empty family-run restaurant that had some over-dramatised, straight to obscure-cable-channel sequel of Jurassic Park playing in the background. After we’d had our fill of bad acting, dubious plot lines and tasty omelette baguette, our bikes were loaded into the car and we drove back up through Heavens Gate pass to a delightfully dilapidated old building that fronts a small park and a 1km walk to the “Love Waterfall”.

I’m sure everyone who enters the park wonders what, exactly, makes a waterfall a “Love Waterfall”.. does merely glimpsing it confer Cupidian emotions? Does one bathe in it for the effect? Is it a secluded spot for the act as well as the emotion? We were equal parts intrigued and apprehensive of what we might find.. 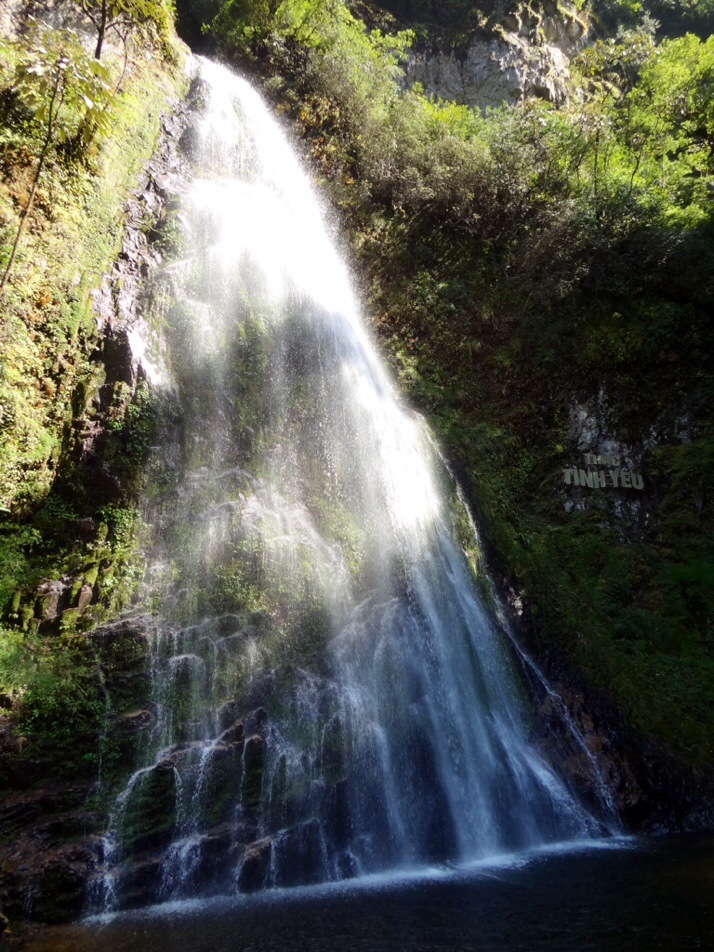 It was secluded, and with the sun cutting through the falling water it was lovely. We like to think that’s what they meant by the name.

Two nights at the Xi Quan Homestay in Ta Phin

Once again blessed with great weather, we were met by Olivier, the co-owner of the excellent Xi Quan Homestay, and his neighbour MaMe, who would guide us on the 14km trek from our hotel in Sa Pa to Xi Quan & Olivier’s home in Ta Phin. Our guide, MaMe, of the Red Dao people

The trek was more strenuous than the one on our first day, but maybe because it wasn’t raining we actually got to see more of the daily rural life. 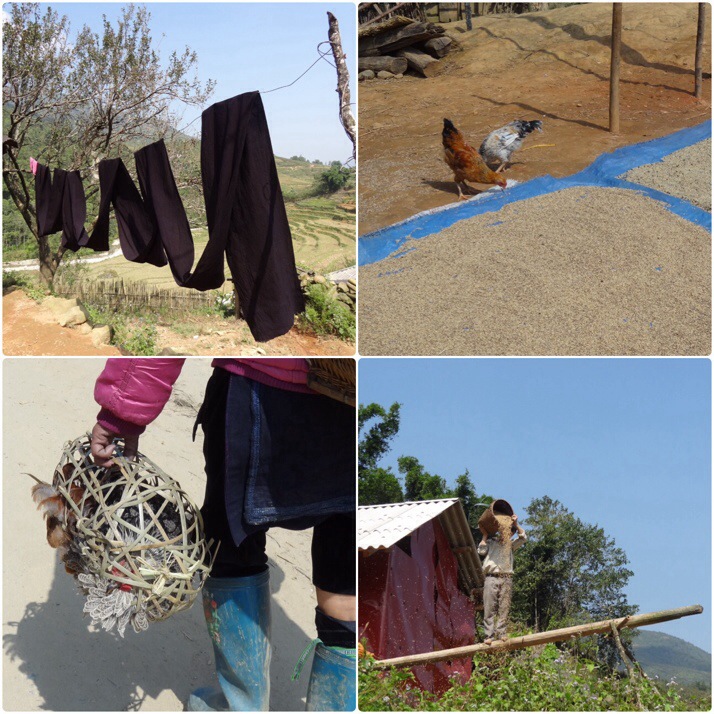 Clockwise from top-left: Dyed fabric drying in the sun; Hens peck at the harvested rice; Using the wind to sift out the rice from the loose outer husk; Delivering hens to her daughter

The Xi Quan Homestay is very remote. It is possible to get a motorbike to the door (which isn’t saying much in Vietnam, I know), but the only thing we heard was the wildlife in the surrounding forest. For our only full day, we sat back in the tranquility of it all, and what better way to relax than a herbal hot-tub bath..

We’d seen photos of the herbal baths in Sa Pa – petals and flowers floating in large circular wooden tubs, sometimes overflowing with bubbles, so when the Homestay gave us the option of helping to pick the herbs we had visions of gaily skipping through the forest, woven basket in the crook of our arms, picking a multitude of colourful exotic flora like little Red Riding Hoods. 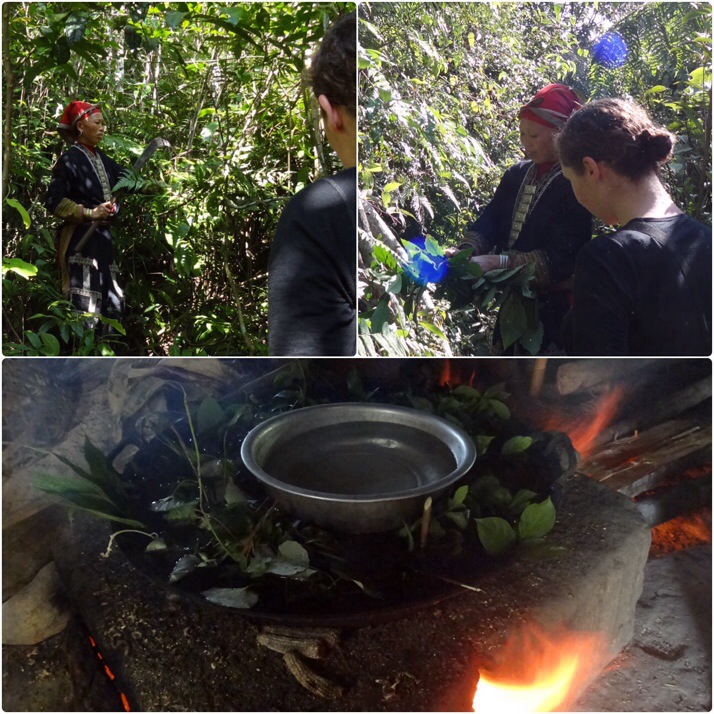 Clockwise from top-left: Xi Quan’s sister with machete in hand; Showing us a harvested green-leafed creeper; Selected forestry boiling on the stove, held down with a large pan of extra water

The reality was a lot more, erm, green. To our untrained eye, Xi Quan’s sister skillfully hacked at random creepers and brush like she was clearing a path, but each one had a very different aroma which she shared with us. We tried to help by offering to carry some of the bundled herbs, and she would appease us for a minute or two before gesturing for it back – there was no basket each, no colourful herbs to pick, and the terrain was too steep for skipping.

Back at her large house, she boiled up the collected greenery, and cordoned off a section of her kitchen with two old duvet covers to give us a little privacy for our very authentic herbal bath. 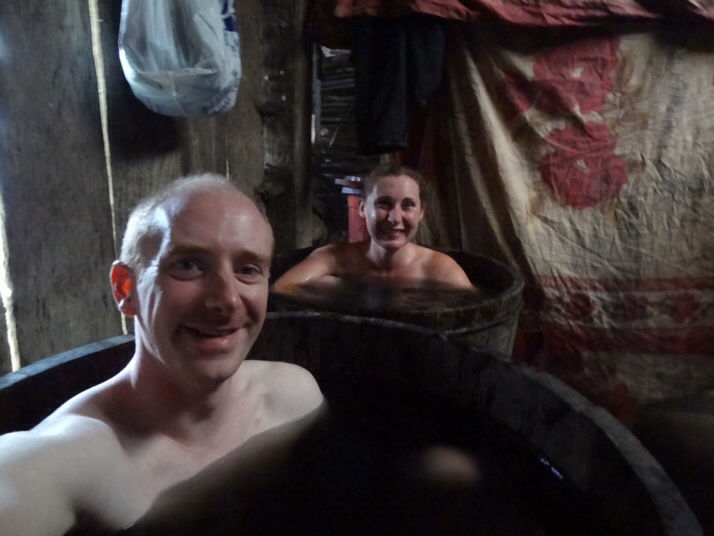 Us enjoying the Red Dao herbal bath. Couldn’t escape the thought that we were being cooked alive for dinner though

The water was hot, smelt great, and had the odd leaf in it. A perfect end to a day of doing very little!