Trinidad is one of the most visited destinations in Cuba and we arrived with some trepidation about how much of a tourist trap it would be, but the pretty little colonial city soon charmed us as much as everyone else who goes there. Yes the historical centre bustles with tour groups during the day and there are dozens of overpriced bars and restaurants but you don’t need to venture too far down the cobbled streets to find normal life. 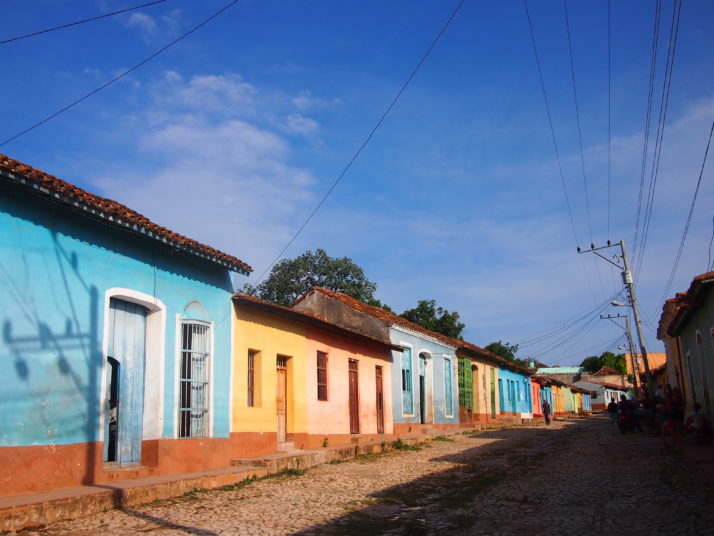 As well as wandering the streets and taking lots of photos there are a few small museums to seek out. Plaza Mayor is the centre of town and most of the attractions are within one block of it. It’s ringed with museums but, apart from poking our noses into the cathedral, we just visited the Art Gallery on its western edge which was almost more interesting for the 19th century frescoes preserved on its walls than the art on display! 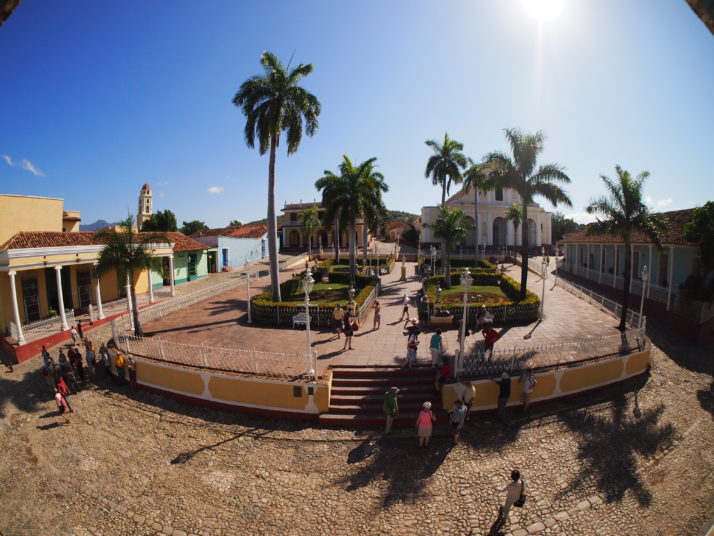 Plaza Mayor from the balcony of the art museum. The cathedral is in the top right of the square in the photo 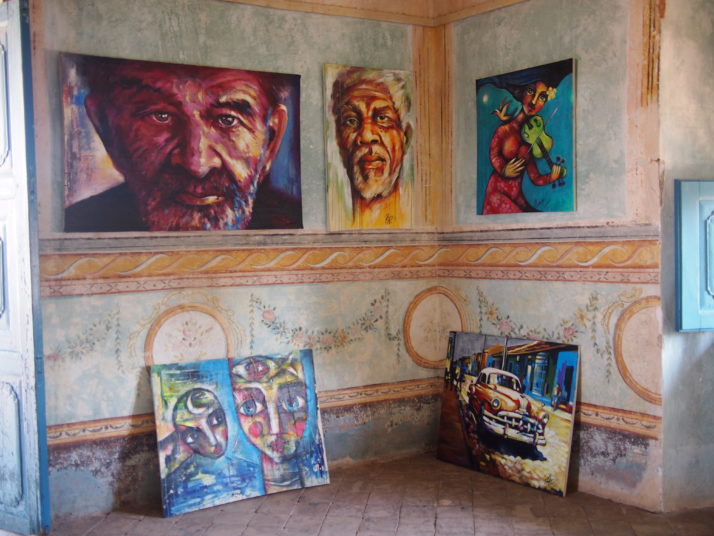 Trinidad is a well preserved example of a Spanish colonial city, and was built with the money generated in the sugar plantations in the nearby Valley de los Ingenios. Together the city and the former plantations have been declared a UNESCO World Heritage Site. The Municipal Museum is set in the one-time home of a sugar plantation owner and shows the opulent wealth that he and his family lived in. Rather bizarrely it’s weekly closing day is on a Friday which hadn’t occured to us as a possible reason for not being able to go in when we first visited.

A sumptuous mother-of-pearl inlaid bedstead in the Municipal Museum

The yellow bell tower visible from much of the centre (see top left in the photo of Plaza Mayor) and the subject of many a postcard of the city belongs to the former convent of San Francisco de Asís. The building now displays a variety of exhibits about the fight against the counter-revolutionaries who based themselves in the nearby Sierra Escambray in the early 1960s and, according to the museum at least, were backed by the CIA.

A little way outside the city to the north-east is a TV and radio antenna perched on a hill called Cerro de la Vigía. It’s a steep 30 minute climb up a rough road but from the top there are stunning views down Valley de los Ingenios and out to the sea. We did it in the late afternoon and I’d definitely recommend hiking in the cooler part of the day, though I think sunrise would be better than sunset if you can rouse yourself as the viewpoint faces towards the west. 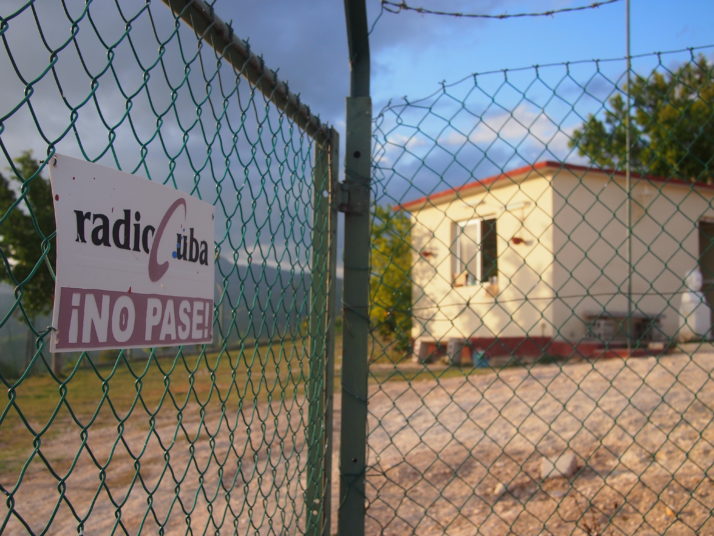 The enterprising security guard might even take you out back to stand on the roof of the shed containing the back-up generator (past the no entry sign) before selling you a cold can of beer!

View down to Valley de los Ingenios (from the top of the generator shed!) 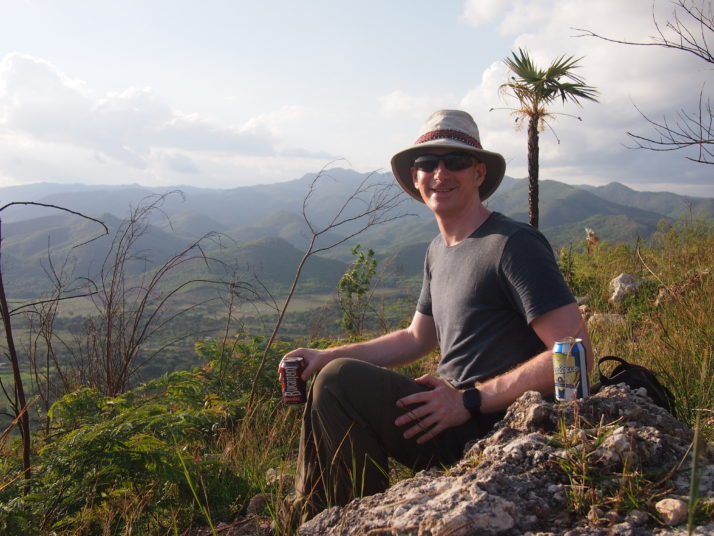 Admiring the sunset view with a cold beer

We hired a taxi to take us around a few of the sights in the Valley de los Ingenios. First up was a viewpoint restaurant which was fine, but for us the view from Cerro de la Vigía was better. Next up was San Isidro de los Destiladeros, the ruins of which are slowly being excavated and restored but are currently in an interesting intermediate state set in lush forest (complete with hordes of mosquitos). 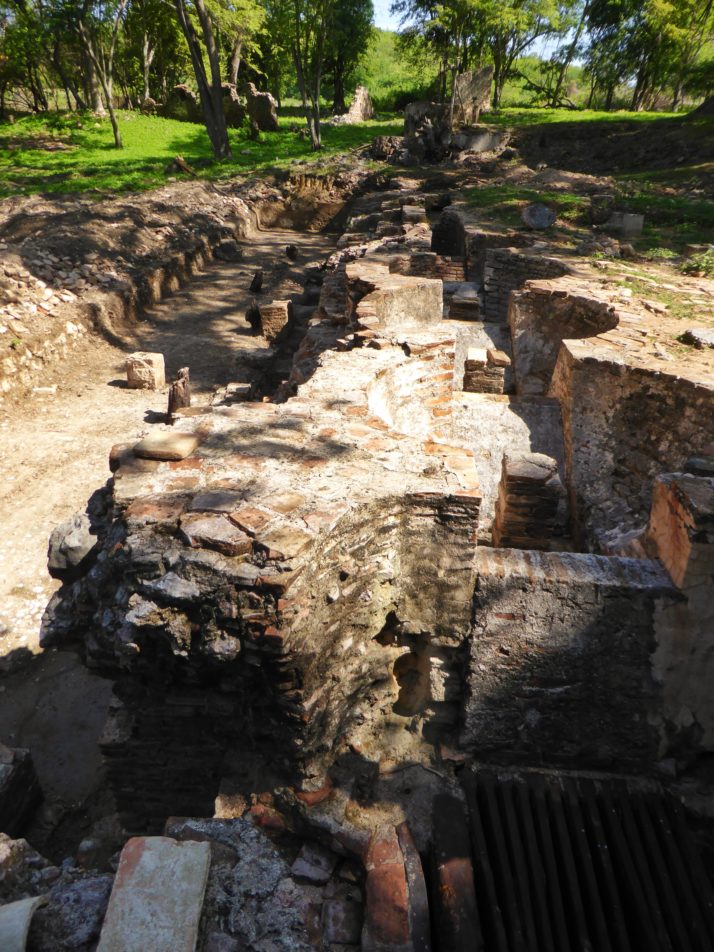 From San Isidro we moved on to Manaca Iznaga, the most touristed of all the sites we visited in the valley. Here the colonial mansion has been turned into a restaurant and the 44m tower which was used to keep an eye on the slaves who did the plantation work is open to tourists with good views from the top. Behind the restaurant is an old sugar press which would have been turned by animals or slaves to extract the juice from the sugar cane. 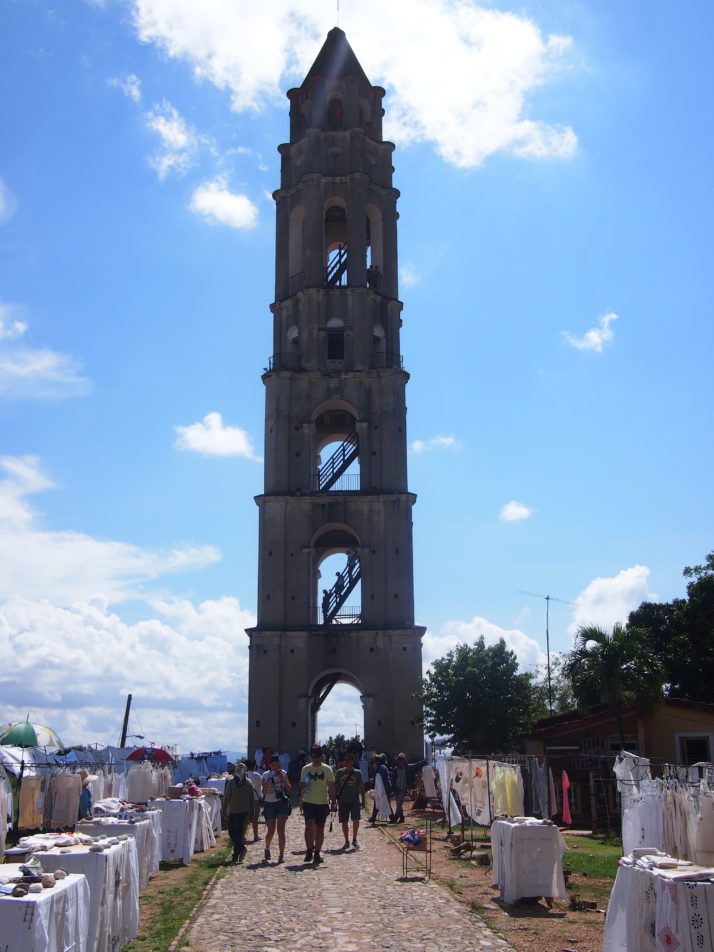 Our final stop in the valley was at Casa Guáimaro. When we arrived we were the only people there and the lady custodian began showing us around the house with its frescoed walls and period furniture explaining the history of the Borrell family who had built it, then in just a few generations lost it, and its subsequent usage as offices, a school and even housing for seven local families! My Spanish isn’t good enough to ask how the wall paintings were preserved during that time, I can only imagine that they had been painted over and then uncovered later. About halfway through the tour the lady began distractedly glancing out of the window and two minutes later we found out why when six bus loads of children on a church trip from Cienfuegos rolled up and started invading all doors. We were handed off to one of the bus drivers to be shown the final two rooms while she tried to contain the crowds… 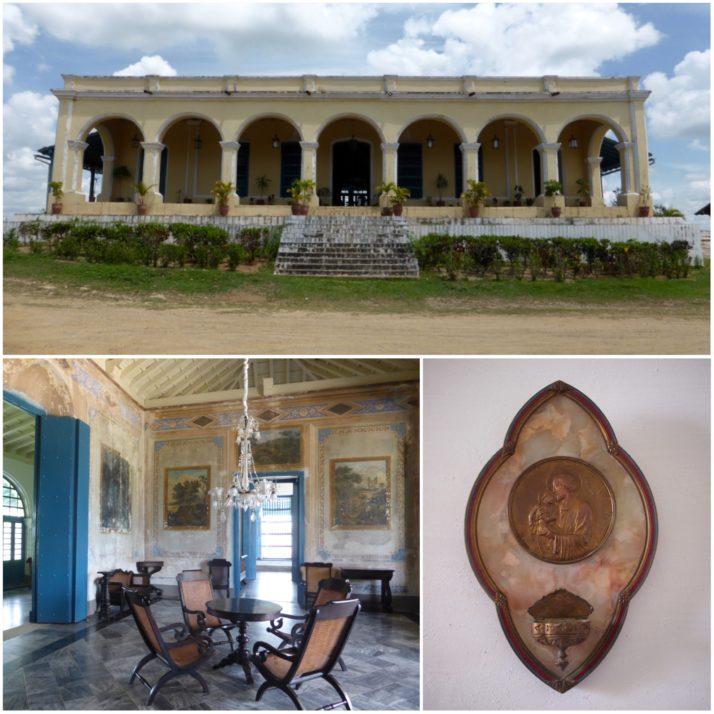 Casa Guáimaro; the wall paintings in the entrance way shows scenes of European cities; a holy water holder in the small family chapel

We enjoyed the variety of the sights in the Valley de los Ingenios, I had thought that it might get a bit repetitive visiting old sugar plantations but each stop had something different to see. On the way back into the city our driver asked if we’d like to stop at a pottery workshop and we agreed. It was interesting to see the craftsmen working so quickly and uniformly and we admired everything we were shown so our driver was rather confused when we didn’t want to buy anything (I think he would get a commision) but we genuinely don’t have a need for a multi-coloured ceramic mobile or vase.

On our final day, we took a walk away from the bustling touristy centre to the west towards the cemetery passing lots of normal Cuban life on the way with roadside butchers, greengrocers, pizza shops and even a barber who Andrew was able to persuade to cut his hair for just a little more than the locals’ price. 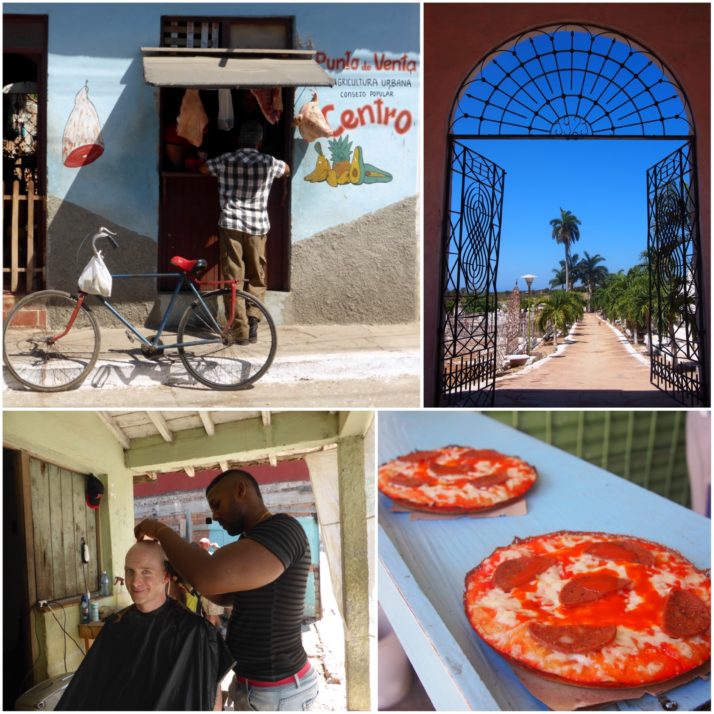 Clockwise from top left: a pig’s head hangs outside a butcher’s shop; gateway into the cemetery; pizza for lunch; the barber had a price list on the wall but insisted that the tourist price was different – he looked rather uncomfortable when we pointed out that all hair is the same

In the afternoon we took the tourist bus to the beach, Playa Ancon (for the record we should have believed the taxi driver and hired a colectivo taxi for the same price – we would have had some flexibility over times and it wouldn’t have been such a crush on the way back). After the beautiful beaches we’d visited along the north coast of the island, Playa Ancon was a bit of a disappointment, nice enough but just not as perfect. We took a walk away from the crowds towards the end of the peninsula then, back at the beach, relaxed with a beer in one of the small bars with a view of the waves. 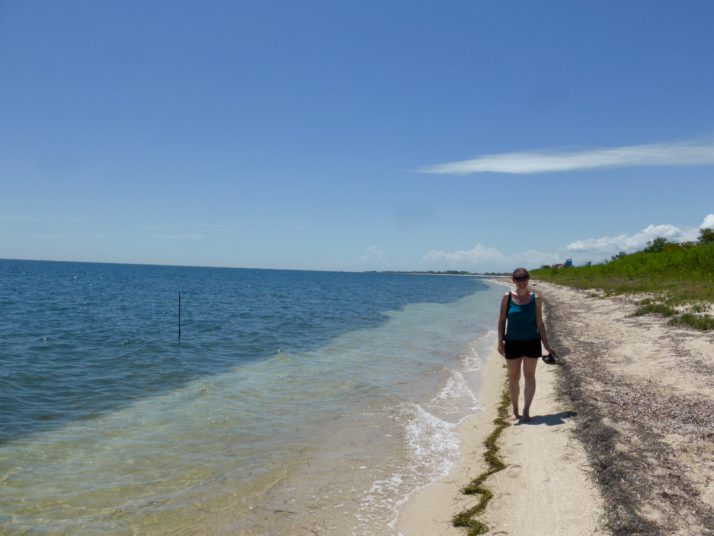 Wandering away from the crowds at Playa Ancon

One thought on “Trinidad, Cuba”