When we were planning our trip to Georgia I’d wanted to include some time in the Black Sea beach resort city of Batumi even though Julie, Jo and I aren’t really beach people, and by that I mean that we prefer a hike, city walk or good museum to a sun lounger. Not that sunbathing was on the cards in late March as it would have been far too cold! 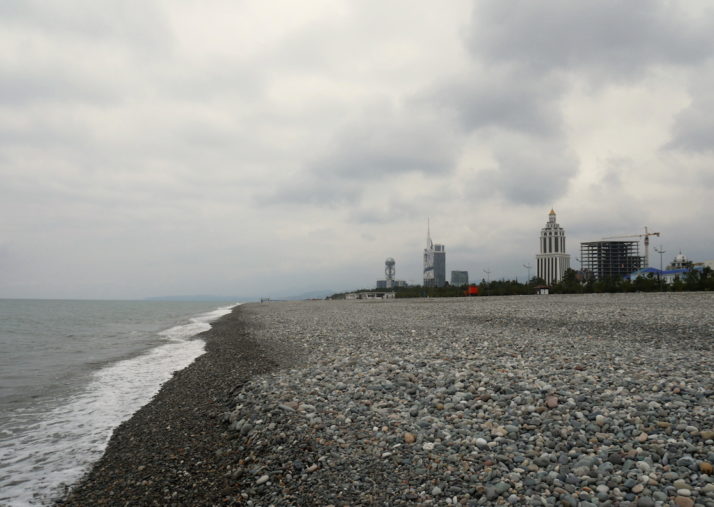 Batumi: Georgia’s beach resort. No fine sand but it is clean and over 6km long

With much of the same reasoning behind hiring a car in Armenia, having picked up another in Kutaisi meant it was easier to justify a couple of nights in Batumi as there were a few sights we’d read about that piqued our curiosity, such as the Black Sea Boulevard, a tower with a ferris wheel at the top (how does that work? – we had to find out!) and the region’s khachapuri speciality is the iconic bread-boat filled with cheese and topped with an egg. Much like Naples being the home of pizza and serving the best we’ve had, would this be our home of khachapuri? 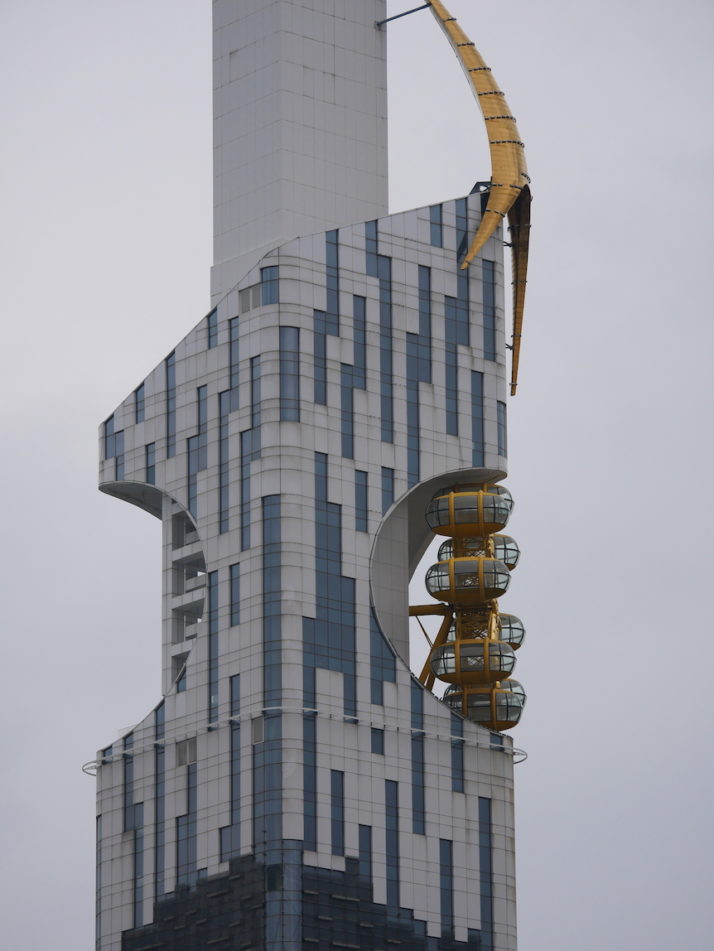 There it is – the ferris wheel at the top of the tallest building in Georgia. Originally built as a Technology University, it is currently destined to become a hotel

Batumi is the third largest city in Georgia and it is easy to see that the laid back vibe is popular with Georgians, Armenians, Russians and Turks alike. Accommodations a-plenty (and really cheap off season) running the whole spectrum from self-service apartments to international luxury hotel chains and they’re building new apartment blocks at an impressive rate too. 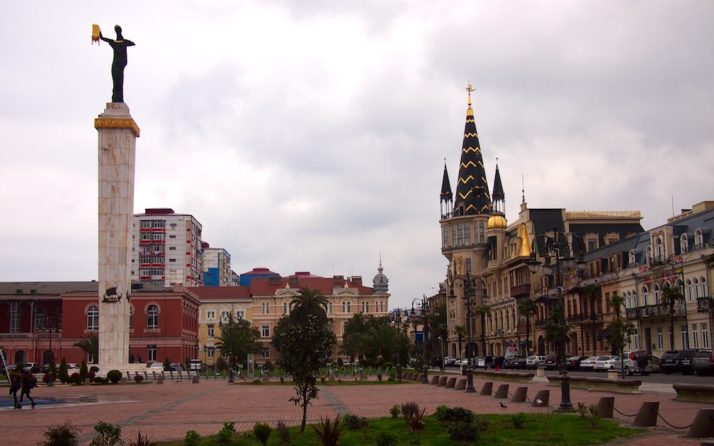 We started our tour of the city in the respectfully renovated Evropas Moedani or Europe Square, consisting of lovely two-tone brick buildings set around a large open square with one of those ground-squirting water features you can play chicken with and a tall statue of a woman holding a golden fleece. Why’s that you ask? So the story goes, Jason and his 49 Argonauts sailed past Batumi, along the Rioni river a little further up the coast and inland to Kutaisi where they took the Golden Fleece from a dragon. The legend of the Golden Fleece is based in history: Georgians used sheepskins to sift for gold in mountain rivers! 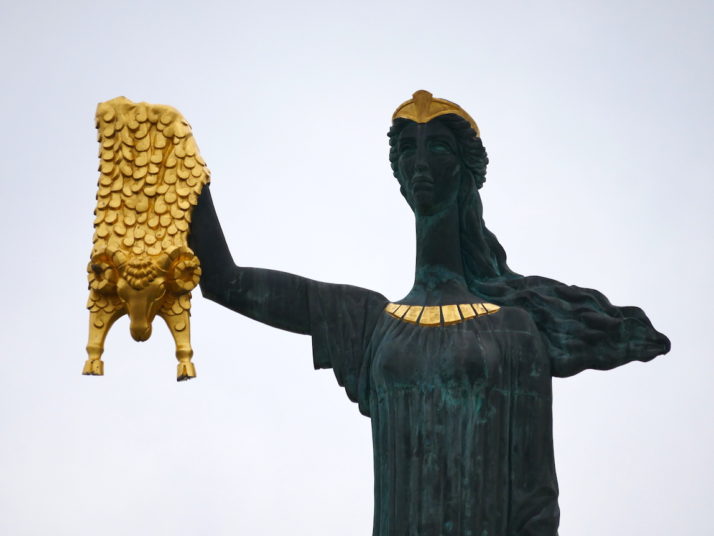 The Medea monument in Europe Square. In Greek mythology, Medea was a daughter of King Aieti, the king of Kolkheti in present day western Georgia. Medea helped Jason to steal the legendary Golden Fleece

Working our way towards the coast we stopped at the Adjara Arts Museum, a nicely sized gallery with a varied collection of Georgian, Russian and European artwork, followed by the Cathedral of the Mother of God in an imposing Gothic Revival style that the Soviets had previously repurposed as a high voltage laboratory! 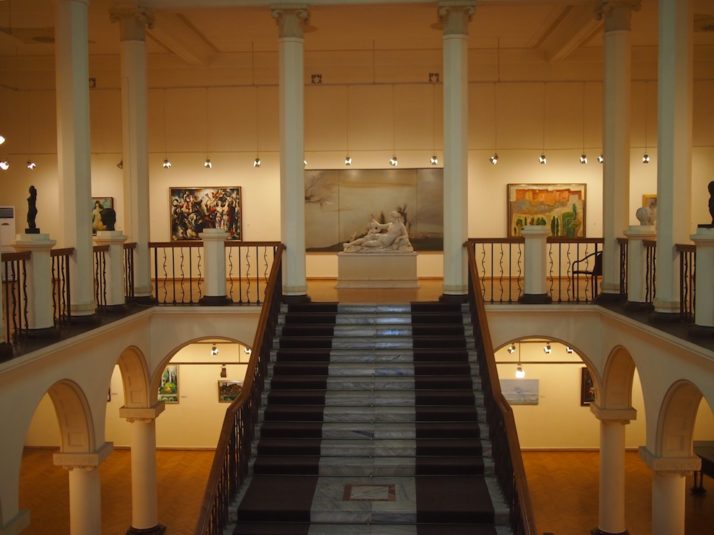 A solid and varied collection with a couple of standout pieces, such as a bold pomegranate by Kudba and a portrait of 2 old men by Gabashvili 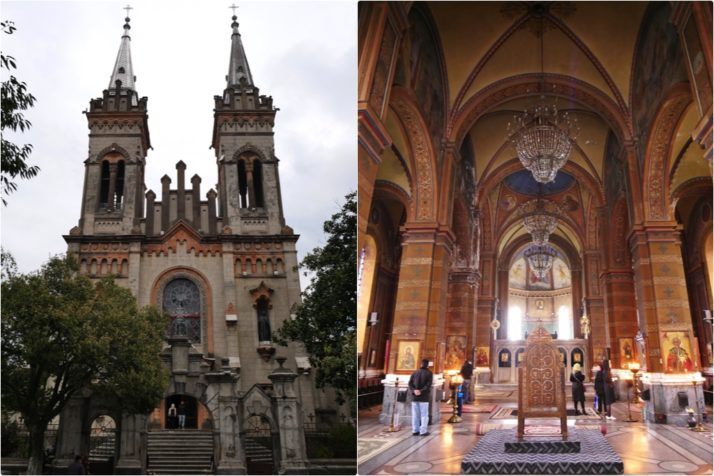 Batumi’s Cathedral of the Mother of God is an impressively imposing Gothic building. No danger danger of high voltage anymore

Batumi’s main attraction is the 6km coastal boulevard, a wide promenade with separate cycle lanes and lined with large, quirky art on the coastline side and impressive hotels and apartment blocks on the other. Crescendoing at the northern end is a wide open space dominated by a large ferris wheel, the other ferris wheel I mentioned earlier that sticks out of the 13th floor of the Batumi Tower – the tallest building in the country – and a monument to Georgian script and culture called the Alphabet Tower. 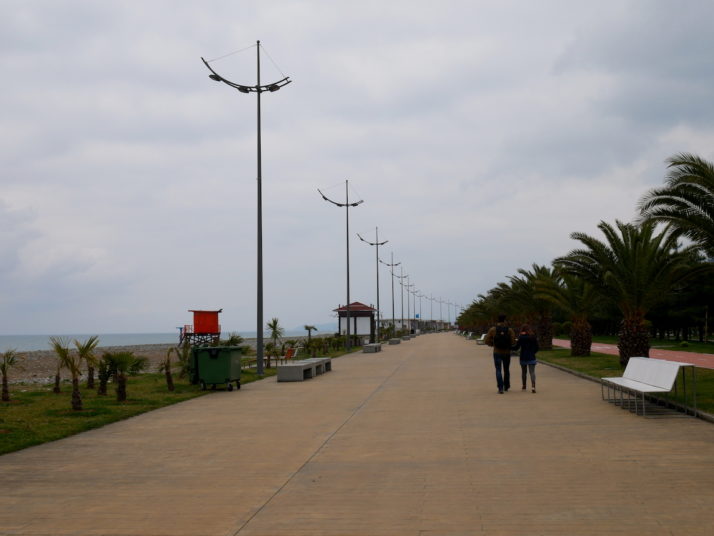 Batumi’s Boulevard. We reckon it’ll be a lot busier when the weather’s nicer.. 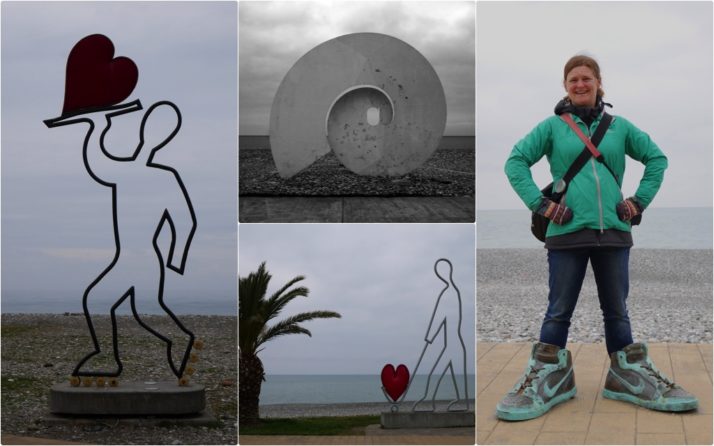 Batumi’s Boulevard is lined with quirky art, including these giant shoes that made us all look like midgets, a series of outlined figures with hearts and what we think was a cross between a snail and the ‘@’ symbol

There’s just as much to see at night too, the most impressive illuminated artwork being Ali & Nino (centre) who change colours as they pass through each other!

A special mention goes to the dancing fountains that our guidebook said wouldn’t be running this early in the year so we were very pleasantly surprised when we stumbled upon them. We’ve seen a few water displays set to music and lights before, but these were by far the most coordinated. 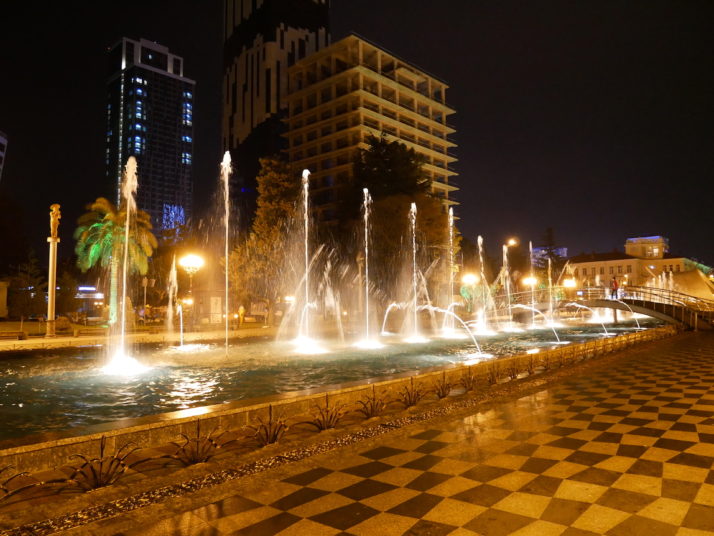 At this point in our travels around Georgia we’d accomplished our side quest of trying all of the styles of khachapuri, the country’s national dish of bread and (typically) cheese. As mentioned, the western region of Adjara is home to the most iconic of khachapuri styles – the Adjaruli khachaphuri.. 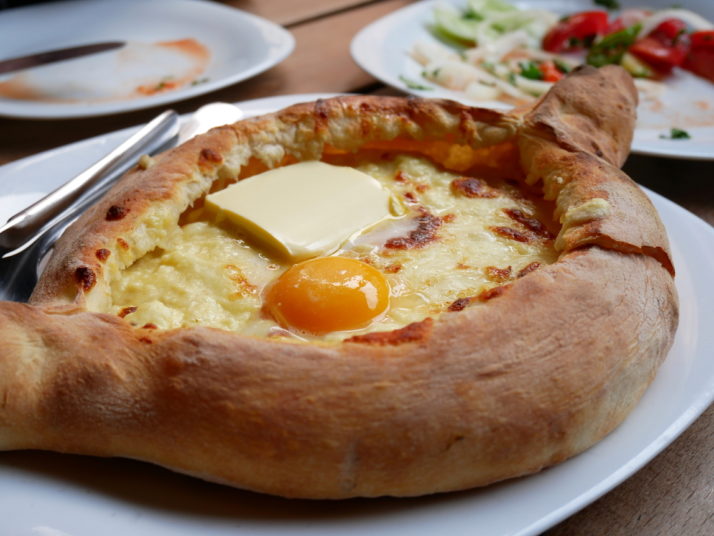 The Adjaruli – a bread boat filled with molten cheese topped with an egg and an generous knob of butter. Genius. Gotta catch them all! Source: Gudaturi

While the Imeruli and Megruli are available across the country and almost all varieties can be found in Tbilisi, we can confirm that just as for pizza in Naples, the local pride in Batumi makes for the tastiest of the tasty khachapuri. Honourable mention and a close second goes to the meat-filled kubdari we watched being skilfully made in Ushguli.