On our final day in Tbilisi we took the short marshrutka (minibus) trip north to Mtskheta, spiritual home of Georgian Christianity and a UNESCO World Heritage Site.  First stop was the Svetitskhoveli Cathedral which dominates the small town’s centre. 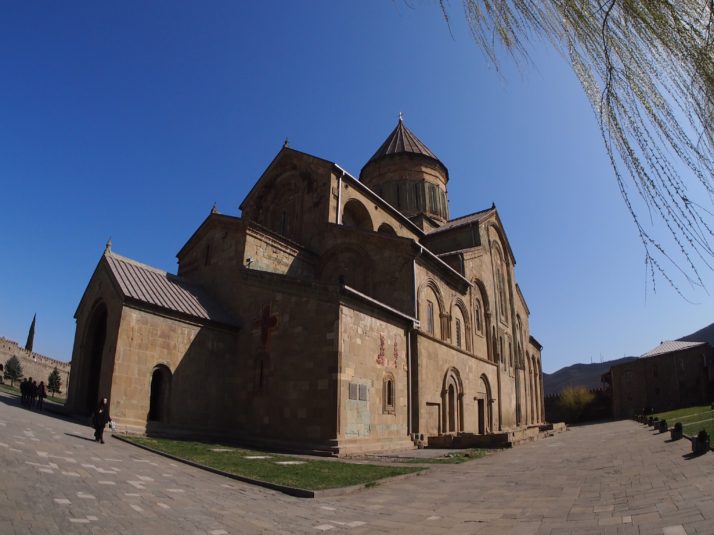 The Svetitskhoveli Cathedral in Mtskheta. We noticed that a lot of Georgian churches have little model churches on their roof ridges and this one is no exception

Svetitskhoveli means ‘Life-Giving Column’, a reference to the legend surrounding the building of the first cathedral on this site in the 4th century. Long before, the robe from Christ’s crucifixion was brought to Mtskheta by a local Jew and ended up buried nearby although the site had been forgotten by the time King Mirian, Georgia’s first Christian king, had been converted and decided to build a cathedral here.  When they tried to raise the cathedral’s central pillar it could not be lifted from the ground, but after much praying by St Nino (more about her presently) the pillar moved of its own accord to stand over the spot where Christ’s robe was buried. 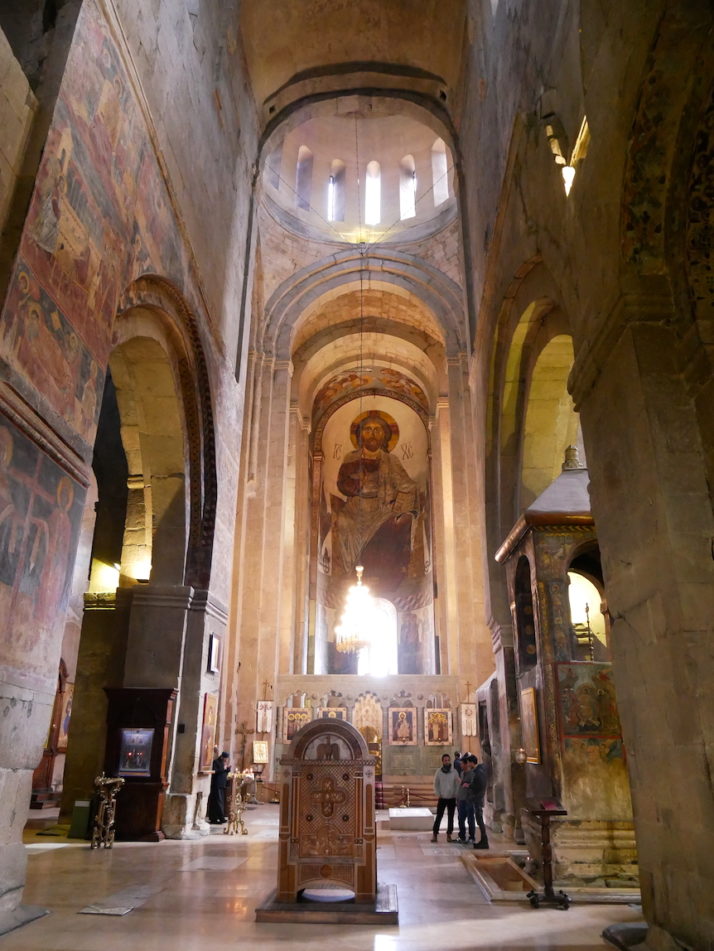 There are some beautiful frescoes inside the cathedral

We loved the cathedral’s decoration, with the Christ fresco in the apse reminding us of churches we’d seen in Sicily, notably Cefalù and Monreale, and the icons with hanging lamps in front. The gravestones in the floor give hints as to the history of the area and the different rulers who have had influence here at various times, we spotted several Cyrillic (Russian) and Arabic, as well as ancient and modern Georgian scripts. In one of the side aisles there’s a copy of the Chapel of the Holy Sepulchre in Jerusalem erected to mark Svetitskhoveli as the second most holy place in the world (after the original chapel) and today visited by many Georgians who are not able to travel to Jerusalem. 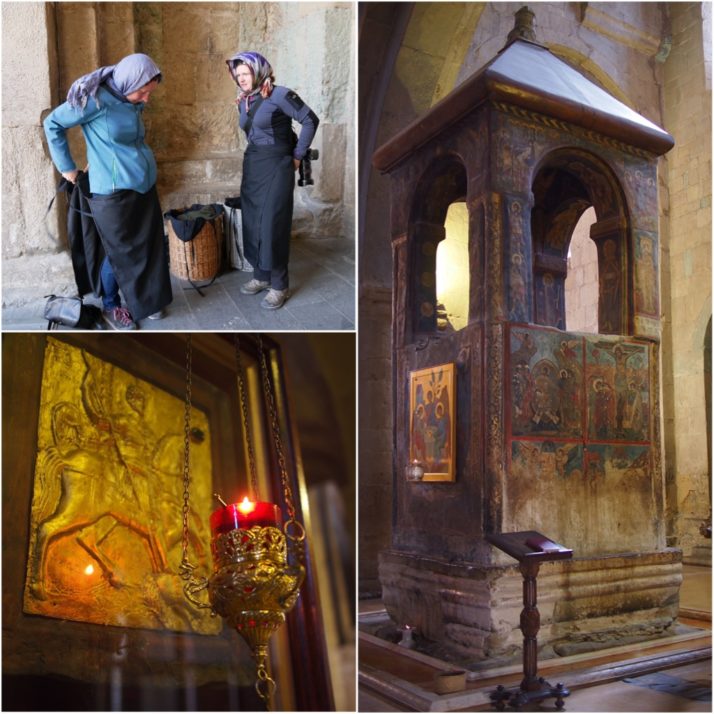 Svetitskhoveli Cathedral (clockwise from top left): Jo and I had to don headscarves and apron-like ‘skirts’ before we could enter (Andrew just had to take off his hat); the original ‘Life-Giving Column’ was on the site of this monument; as you might expect St George is a common subject for icons all around Georgia

After visiting the cathedral we were starting to get hungry. The Lonely Planet told us that lobio, casseroled kidney beans with herbs and spices, are a specialty in Mtskheta so that was what we sought out. They’re served in individual clay pots and were even tastier than we expected. With some bread and salad they made for a nutritious and cheap lunch! 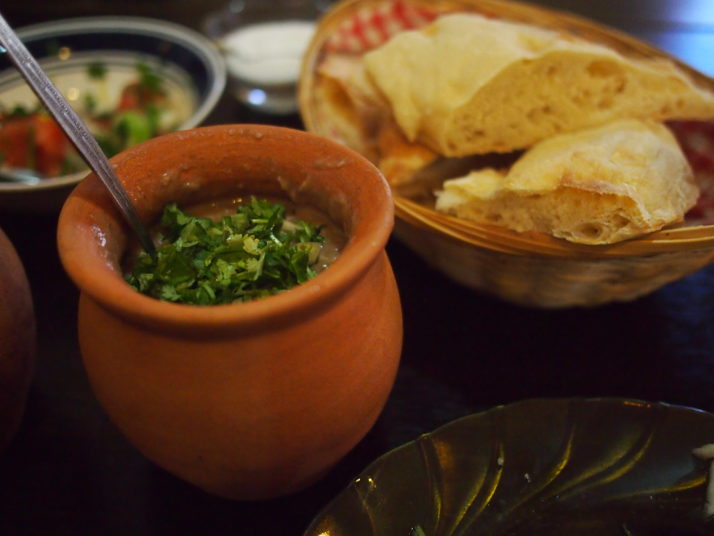 Lobio for lunch in a Mtskheta cafe

After lunch we made our way to the Jvari Church, sitting on a ridge over the town.  As the crow flies it’s not far, but to get there by road it’s 11km each way and, as it’s not served by public transport, most visitors take a taxi.  But that’s not our style, it was a glorious day and a bit of exercise would do us good, so we checked with the helpful lady in the Tourist Information Office who informed us that it was possible to walk there in about an hour.  The only hitch was crossing the dual carriageway that separates the town from the hill where the church is.  Fortunately the road wasn’t too busy, the visibility was good and there was a nice high central reservation to wait on in the middle, still it wasn’t the nicest road crossing we’ve ever done – though less stressful than navigating the hundreds of teeming scooters in Vietnam! 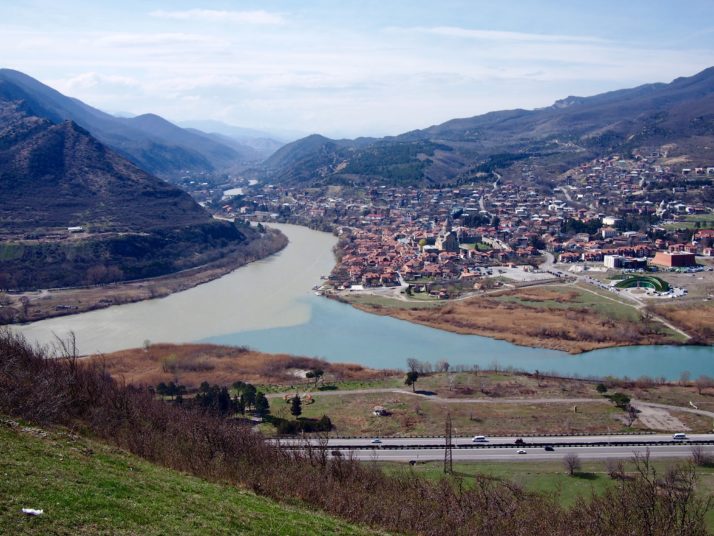 The Jvari Church itself is small and simply constructed but very holy for Georgians as it stands on the site where King Mirian erected a wooden cross soon after his conversion by St Nino in around 327AD. St Nino was a missionary from a Greek-speaking Roman family. Reputedly related to St George, she travelled to Georgia from Constantinople (modern day Istanbul) and became one of the most important saints in the Georgian Orthodox church. Her grapevine cross is a symbol of Georgian Christianity, and Nino is a very popular girls name too – it sometimes seemed like every other local woman we met was called Nino! 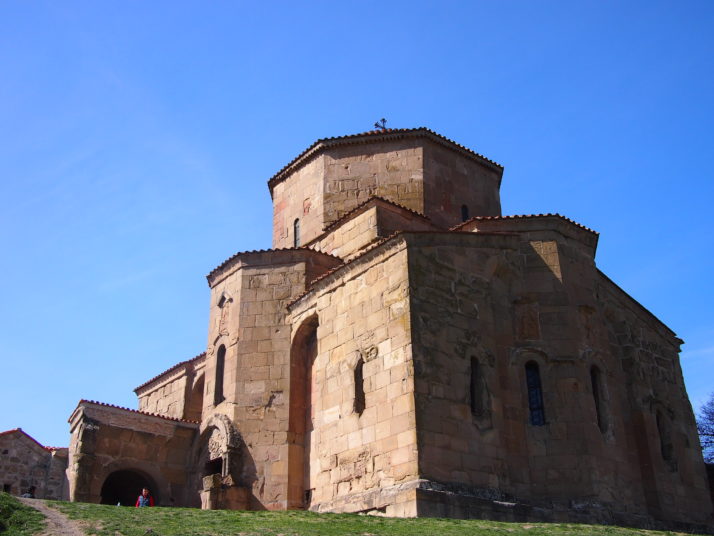 The small and symmetrical Jvari church

It was extremely windy on the ridge outside the church though the view was worth being blown about for. The inside is a big contrast to the Svetitskhoveli Cathedral, with bare stone walls rather than frescoes, the small circular space is dominated by a large wooden cross, and there’s a rather sombre atmosphere with a black-clad old lady shushing anyone who speaks too loudly. 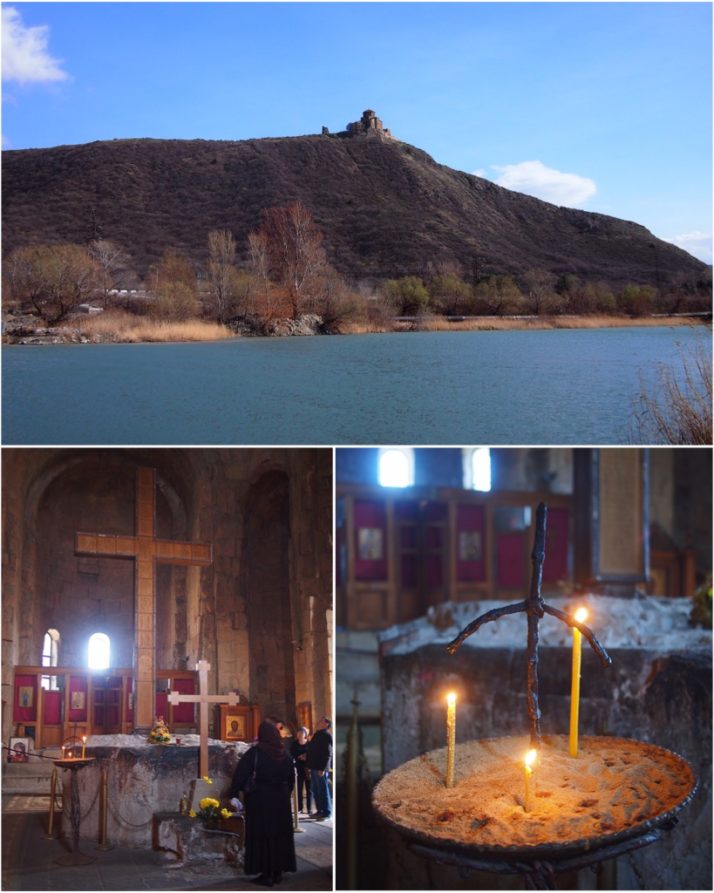 Jvari church (clockwise from top): the church stands on a ridge across the river from Mtskheta town; a representation of the cross of St Nino; inside the church is dominated by a large wooden cross