Severobaikalsk is at the northern tip of Lake Baikal – the oldest and deepest lake in the World. Our guidebook says that if all the rest of the world’s drinking water ran out tomorrow, Lake Baikal could supply the entire population of the planet for the next 40 years. 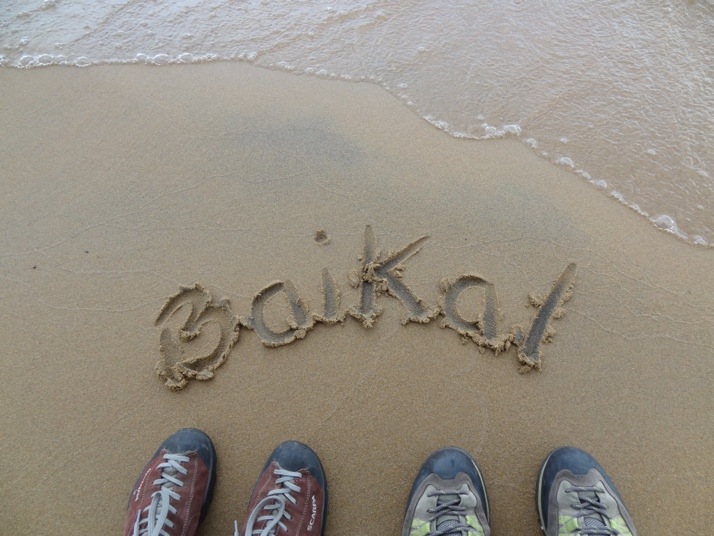 Our feet in Lake Baikal. The water is safe to drink, but maybe not the bit we’ve just stepped in..

The town itself is just a little older than us, as it was established to support the construction of the Baikal Amur Mainline (BAM), which is a second, parallel northern line to the Trans-Siberian railway. The town is quite a small place, not particularly pretty to look at, but its dominating, uniform, tiled apartment blocks are specially designed to withstand both permafrost and earthquakes up to 9 on the Richter scale.

Top of the recommendations in our guidebook for staying in Severobaikalsk is the Baikal Trail Hostel, run by the “ultra-helpful, English-speaking Anya” – and their description is spot on. Anya also has quite a connection to Severobaikalsk as we later found out – her parents helped build it and she grew up here: her Mother, Rada, was a bridge engineer, and her Father, Evgeny, worked on the apartment blocks.

The apartment blocks long complete, Evgeny is now working on a series of trails and walks with the help of volunteers towards the lofty aim of someday encircling the entirety of Lake Baikal.

The little wooden village of Baikalskoe is a 1 hour, bumpy local bus-ride south from Severobaikalsk, and is home to a small jetty and a 14km trail along the undulating western coastline of Lake Baikal. 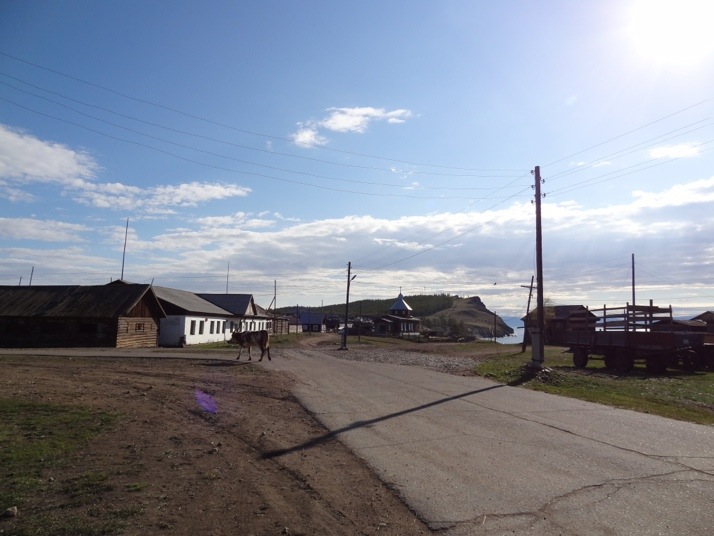 A cow crosses the main road in Baikalskoe village. The trail heads up the hill beyond the church

The trail contains some lovely wooden sculptures of animals; a cow, reindeer, fox, and after recognising a sable, we thought they were getting quite exotic and we wondered what might be next, a woolly mammoth or dinosaur perhaps? The very next sculpture, I kid you not, was a pterodactyl.

The trail took us up and down, through open field and forest, cliff-top and pebbled beach, each with spectacular views of the countryside and the lake 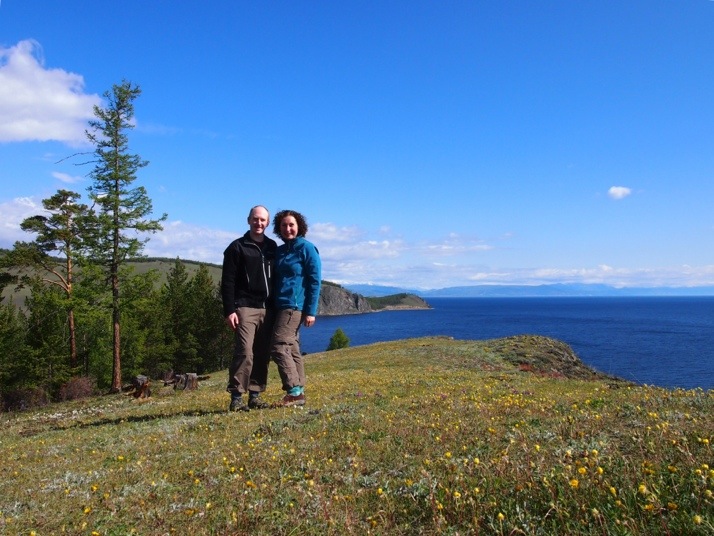 The water is clean enough to drink, and the air must be the cleanest we’ve ever seen as the forest floor is carpeted in various flavours of lichen. I specifically said flavours because there’s a moss-like lichen that reindeer find very tasty! 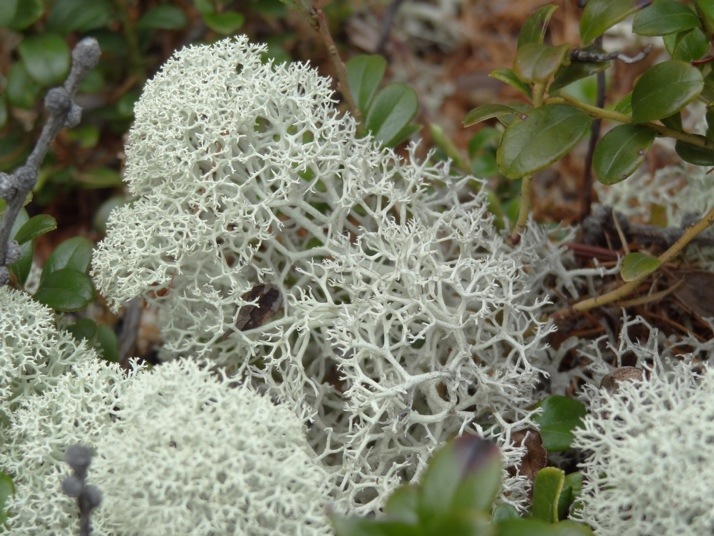 One of the many lichens

Before we got the return bus, Anya had arranged a traditional fish meal for us with the locally famous Gertrude and her family. Gertrude makes little fish pies that are a lot like pasties, and sells them in the village. They were so good that we think this is the reason she’s so well known. Dinner consisted of freshly made fish soup, fish pie, and homemade berry crumble fingers. Yum. Gertrude and her granddaughter Anya made us feel so welcome in their home. Cows waiting patiently for the bus back to Severobaikalsk

Close by Severobaikalsk are a couple of abandoned gulag mining camps. En-route to the northern one, and accompanied by Pavel who discovered it, our guide Rada stopped frequently to point out many of the local monuments to the construction of the town and the railway. After a team of tunnel-builders completed each of the 4 BAM tunnels nearby, they constructed a monument to their achievement and threw a party. 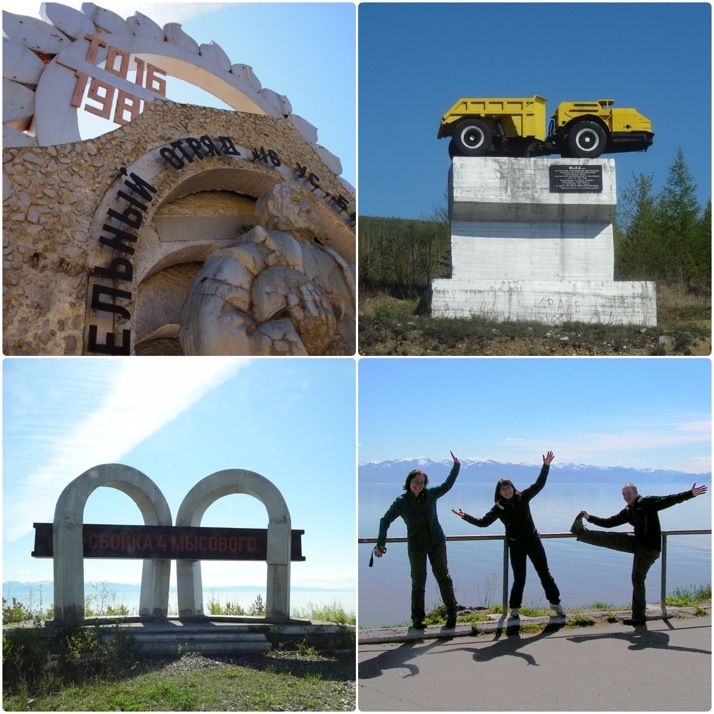 The trek to the gulag camp was overgrown but very pleasant. While the body treks forward, the mind wanders backward, imagining what it must have have felt like to be one of the 200 bourgeoise exiled to Siberian manual labour, walking this very path a lifetime ago. 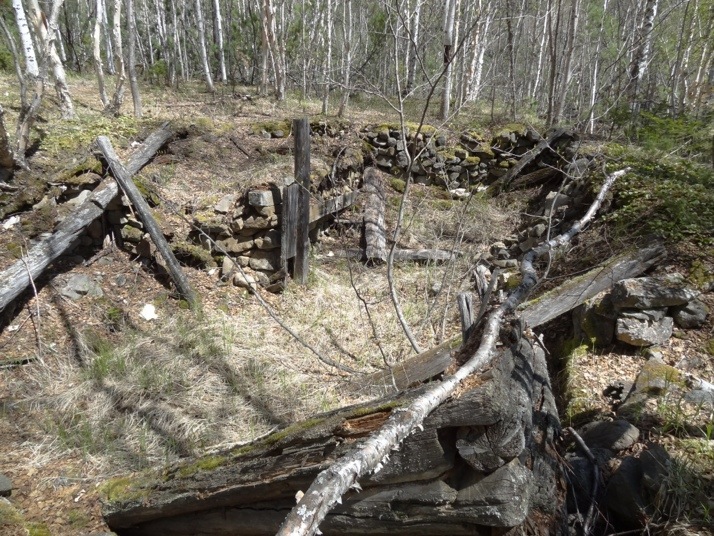 Only foundations remain of this former mica mining gulag camp

Only foundations remain of the camp’s buildings, the odd pan and mining wagons lie scattered about the place, as if the camp was suddenly liberated, leaving the forest to slowly reclaim what was once a man-made clearing. 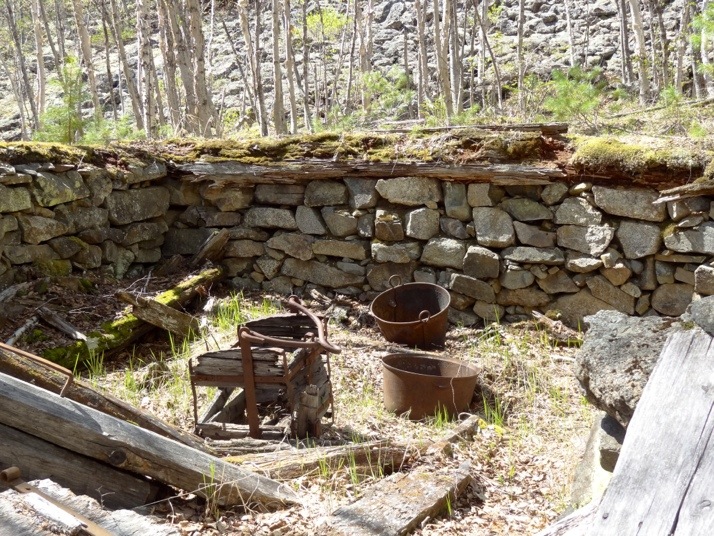 After a spot of lunch, the climb continued albeit at a steeper gradient to the mica mines themselves. We visited the entrance to 3 mines, all of them flooded, their entrances collapsed and strewn with small trolleys used to transport the mica. 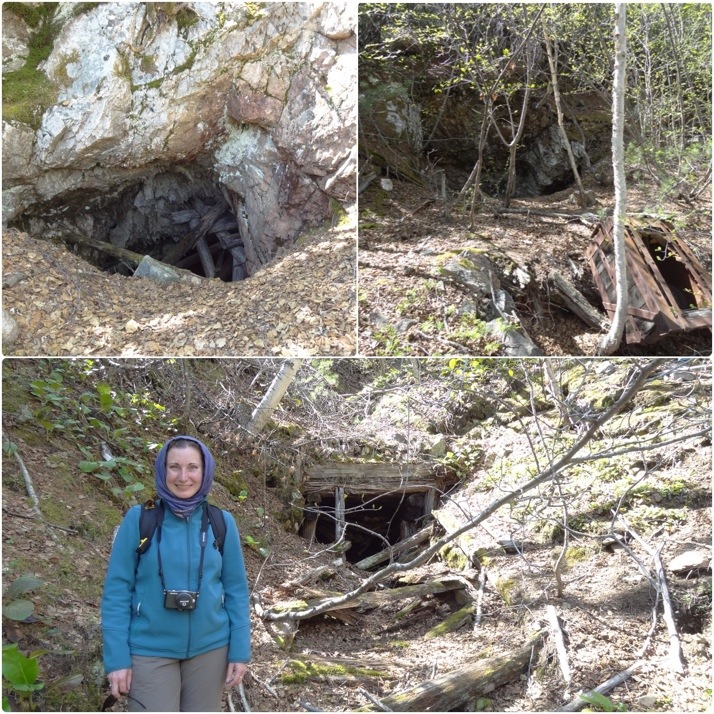 Mica mine entrances, at one of the gulag camps near Severobaikalsk

Because of the seismic activity in the area, there are a number of geothermal hot springs and given Julie’s love of saunas, banyas and all things hot, we had to check them out.. 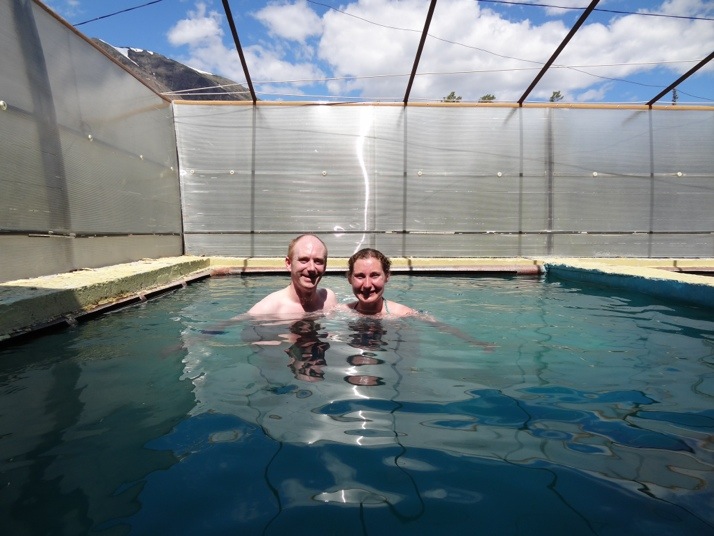 We really enjoyed the springs. The friendly attendant topped up the waters from the source until it got almost too hot to sit in them!

And so to our Severobaikalsk round up..

What photo takes you right back to Severobaikalsk?

When Lake Baikal starts to thaw, it does so in icicle-like shards, which make a distinctive glassy sound as they chink together with movement of the water and the wind.
A couple of weeks before we arrived, a suspected earthquake created a large wave on the lake, which deposited these icicles on the northern shore. It is a very rare spectacle, and one which all the locals came to see and climb! 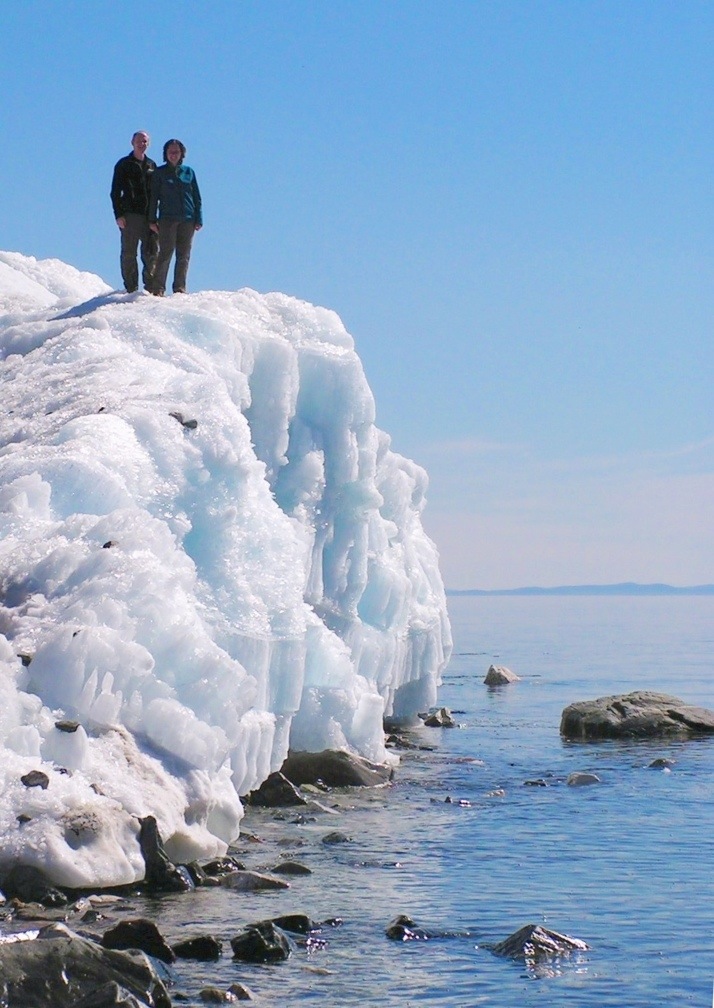 Us on the ice crystals at the top of Lake Baikal. Photo credit: Rada ;)

You really know you’re in Severobaikalsk when…

You think you’ve walked two or three blocks, but really you’ve only walked one – the apartment blocks are numerous and well spaced out.

What one item should you definitely pack when going to Severobaikalsk?

We were there in tick season (May-June), and even if you’ve had the vaccinations, you’re still not 100% safe from catching encephalitis, so anti-tick spray and vigilance are essential if you intend to go trekking.

5 thoughts on “Severobaikalsk Round Up”