The sheer variety of temples around Angkor is just incredible. Here are some of my highlights.

From afar, Angkor Wat‘s beauty is apparent but the temple of Bayon in the centre of the ancient city of Angkor Thom, in the Lonely Planet’s words …looks rather like a glorified pile of rubble from a distance 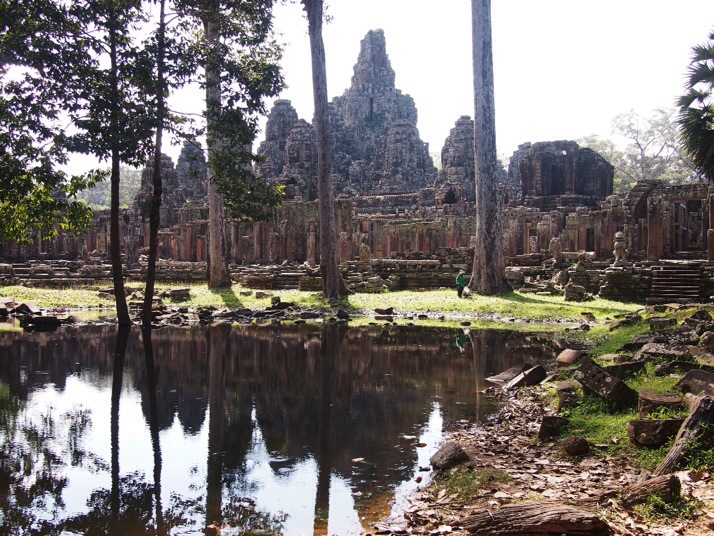 But as you move closer and climb to the upper levels you begin to see some of the faces looking out from every tower. Altogether there are 54 towers and 216 faces and I loved their slightly enigmatic Mona Lisa like smiles. 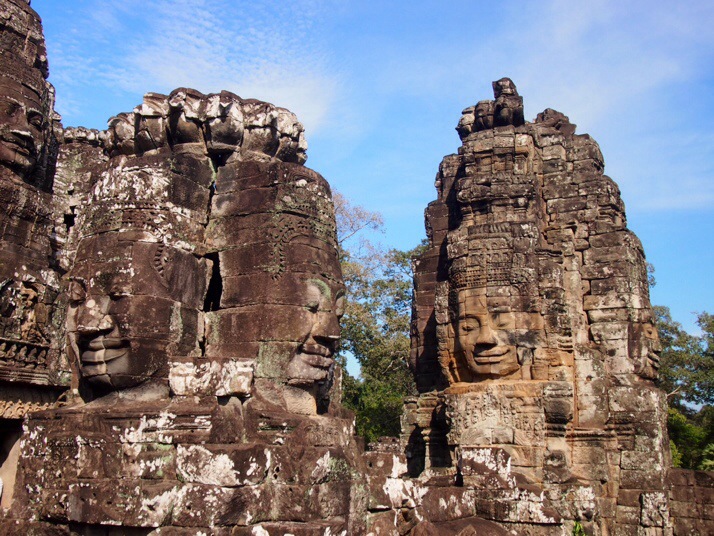 The landscape at Angkor is dominated by temples with five towers. Kbal Spean made an interesting change, its name literally means ‘bridgehead’ which refers to a natural rock bridge at the site but in English it is often referred to as the ‘River of a Thousand Lingas’. The linga is an ancient Hindu representation of the god Shiva and there are indeed at least a thousand of them carved on the riverbed here as well as numerous other Hindu carvings along a short stretch of the riverbank. 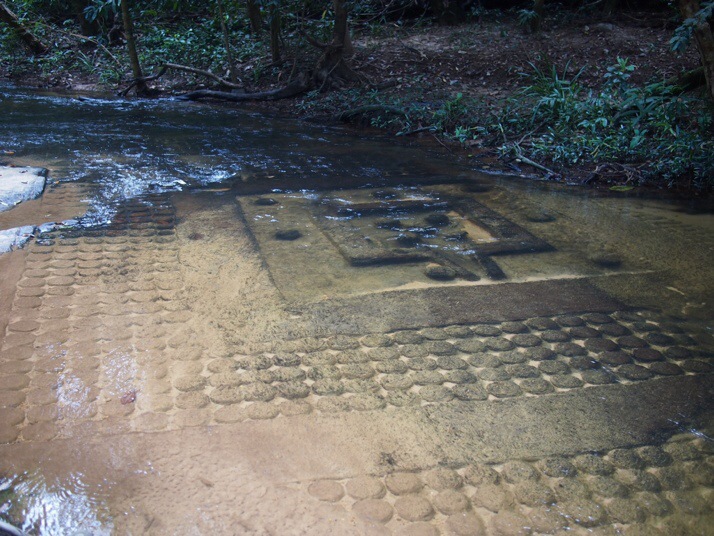 Linga carvings on the riverbed 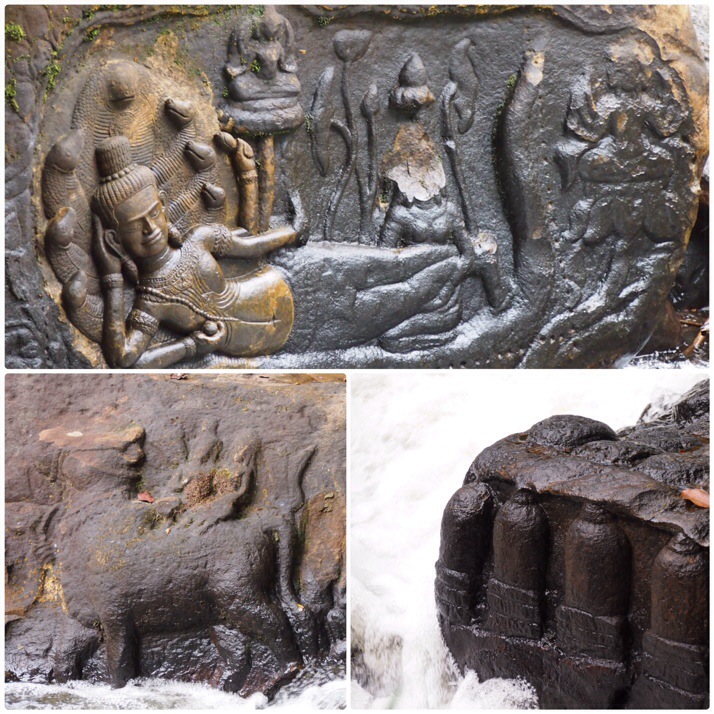 Hindu carvings of Vishnu, Shiva and Uma on Nandi the bull, and more lingas

The site is about an hour and a half tuk-tuk ride from the town of Siem Reap and then a further 1.5km uphill walk through the jungle from the car park to the carved riverbed. You won’t find coach loads of Chinese tourists here! As well as being a lovely change from the other temples it was great to see some wildlife in the forest. 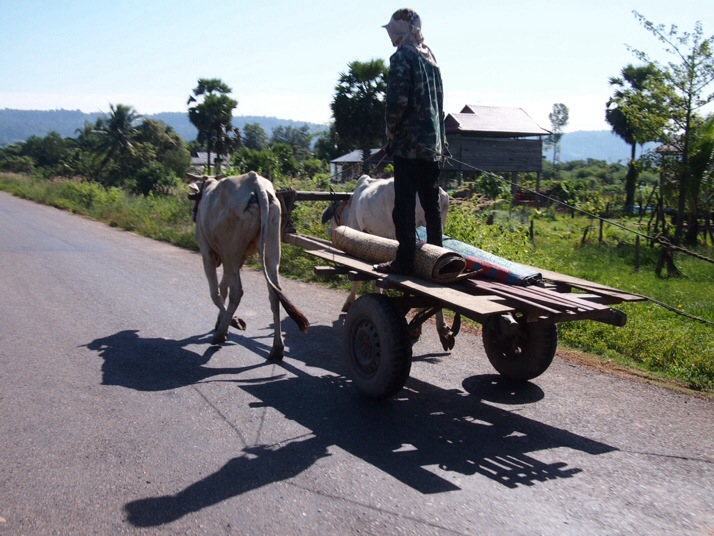 Overtaking an ox cart on the road to Kbal Spean 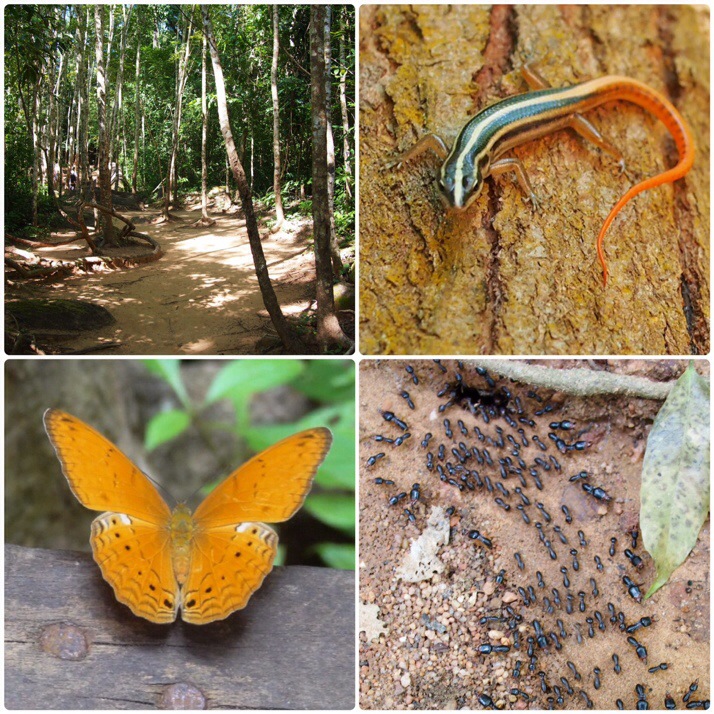 Clockwise from top left: forest path to Kbal Spean, Yellow Striped Tree Skink, there were so many termites munching next to the path that we could hear them!, pretty butterfly

We combined our trip to Kbal Spean with a visit to the tiny temple of Banteay Srei. The temple’s carvings are incredible. Breathtakingly intricate and seeming to cover every available surface.

Banteay Srei is so small that it looks like a model of a temple after seeing the huge scale of Angkor Wat, Ta Prohm, Bayon, et al. 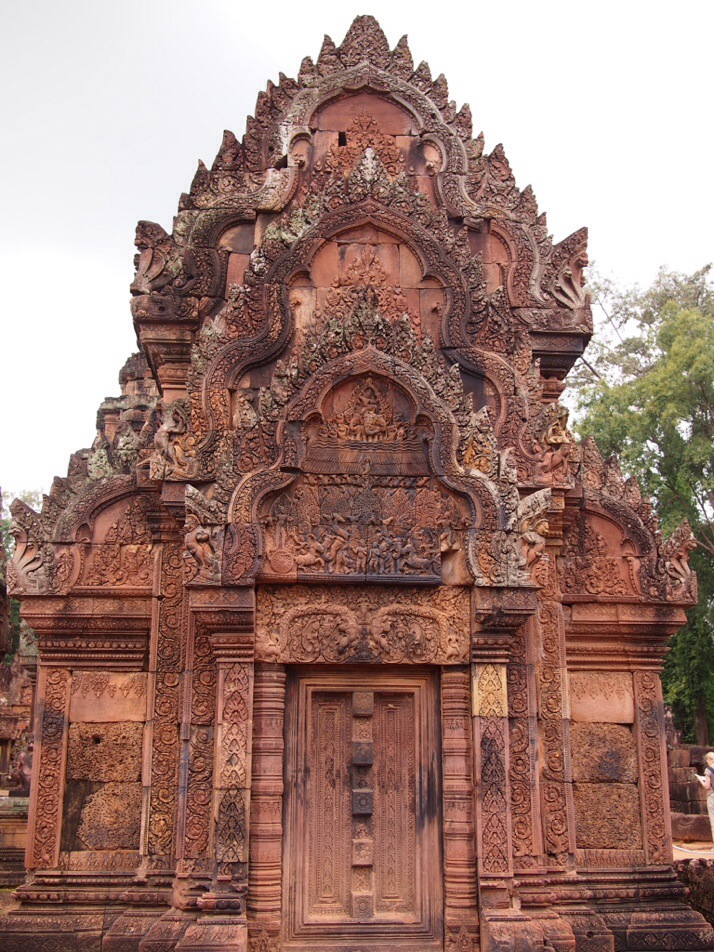 The ancient city of Angkor Thom is surrounded by a wall 12km long. It is punctuated by five gates – one each on the north, south and west sides and two on the east. They have huge faces atop their towers, similar to those at Bayon, but also incorporate stone elephant heads and other carvings. 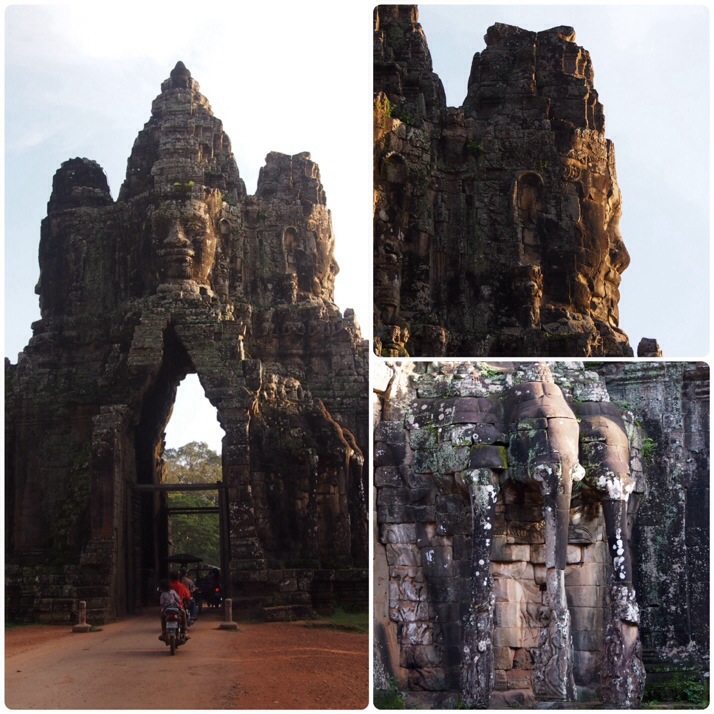 The east gate can’t be reached by tuk-tuk or bus, you have to come under your own steam. Some of its faces are starting to fall apart.

In front of each gate on either side of the causeway crossing Angkor Thom’s moat are 54 gods and 54 demons taken from the story of the Churning of the Ocean of Milk. They are battling to extract the elixir of immortality from the ocean by playing tug-of-war with a giant serpent whose middle is coiled around a mountain, turning it to churn up the water. 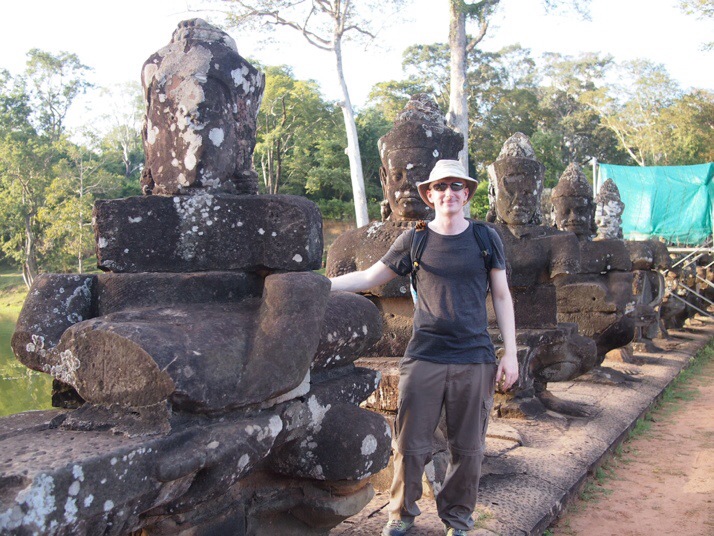 I think I inherited my love of old trees from my dad. There are magnificent specimens all around the area with huge buttress roots, dangling aerial roots and sprawling branches. 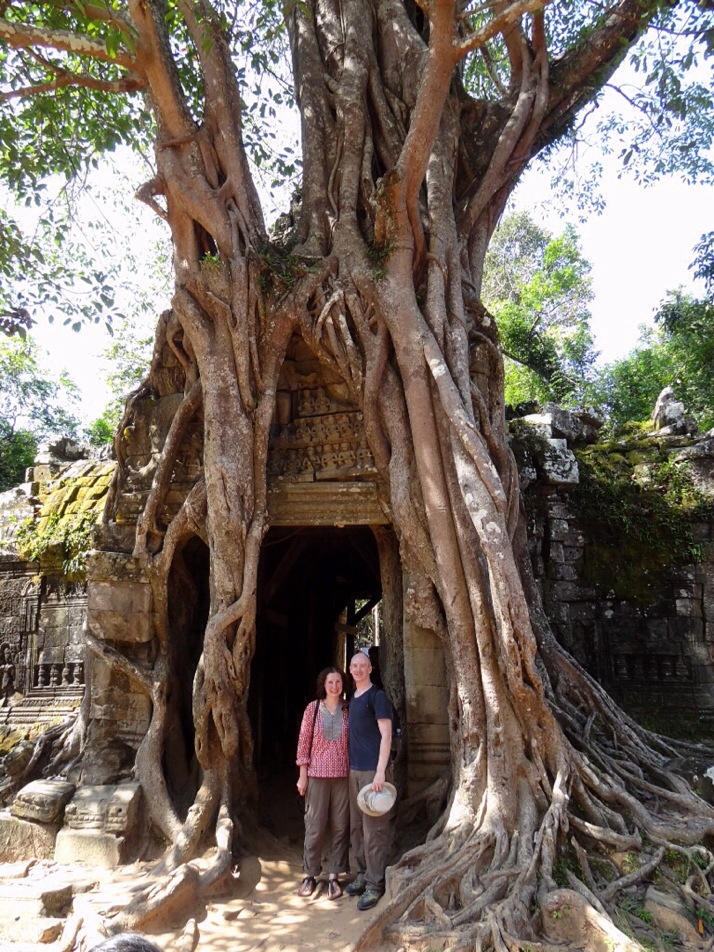 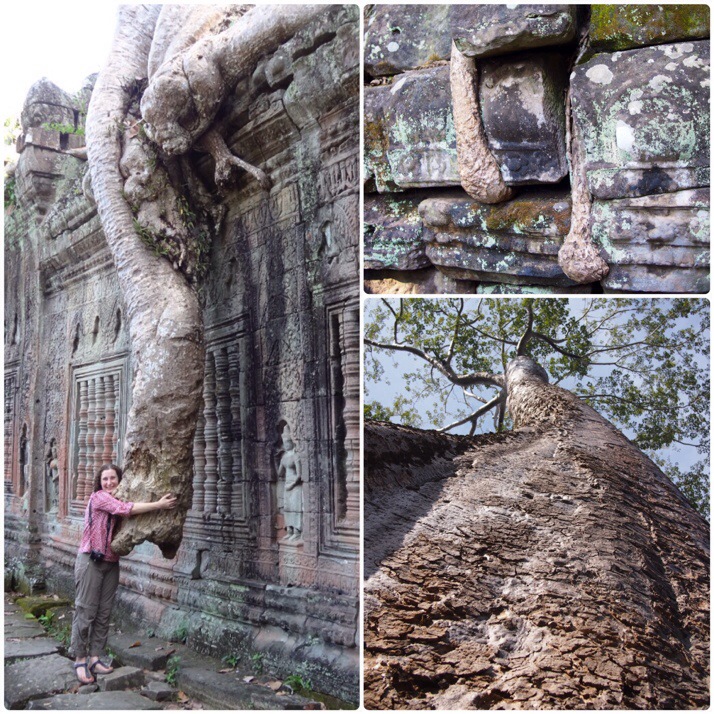 I love the tree! – hugging a huge root at Preah Khan, roots breaking through a temple wall, looking up a buttress root into the canopy at Ta Prohm

I know it’s not strictly a temple highlight (OK, it’s got nothing at all to do with temples…) but I felt like the meal that we had at Haven should get a mention as it is definitely on my list of memorable experiences from our week in Siem Reap. Not only was the food amazing and the service friendly, but by eating there we were supporting a good cause.

Many children in Cambodia grow up in orphanages. When they come of age they are basically turned out to manage on their own. And so this training restaurant was founded (by a Swiss couple) to help give these young Cambodian adults a start in life by providing life support alongside a training in catering and hospitality. A meal to remember: vegetable tempura to start, Khmer chicken curry for main, incredible chocolate cake for dessert, and rounded off with coffee and a shot of infused rice wine (this one was mango and green chilli)

If you’re planning a visit to Siem Reap we would highly recommend a meal at Haven, and it’s a good idea to phone or email ahead as when we just turned up one evening it was already fully booked on that night and the following night.