Amsterdam was on the list of places that we wanted to visit before we set off on this two year trip. We even considered starting our journey here by taking the ferry from Newcastle, but in the end we decided that we wouldn’t have enough time to do it justice and get through Europe in time to make the most of the fixed start date on our Russian visas. Amsterdam stayed in the back of our minds though and when we were planning the last stage of our route northwards through Europe it felt like a logical place for our final long stay before returning to the UK. We’d booked our accommodation and train tickets before I realised that staying in the Netherlands in April meant tulips and I got very excited! 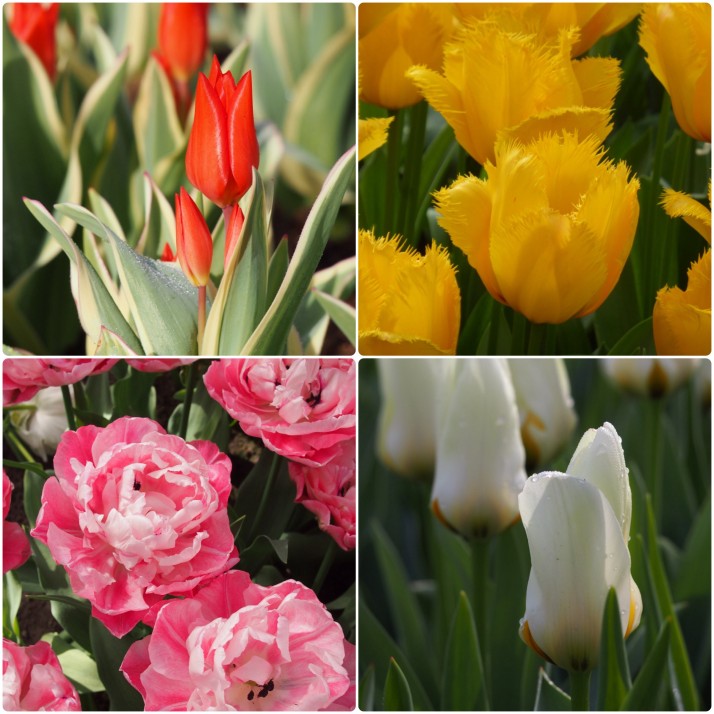 Tulips come in a surprising variety of shapes and colours

Tulips are not native to the Netherlands but were first introduced from Turkey in the 16th century and immediately became popular, so popular in fact that they were responsible for the world’s first economic bubble in 1637, usually referred to as Tulip Mania. Nowadays the Netherlands produces over 50% of the world’s cut flowers and a massive 80% of the world’s bulbs. Keukenhof is the showcase for the Dutch floricultural industry and every year 800,000 visitors from around the world descend between mid-March and mid-May to marvel at the spectacle. 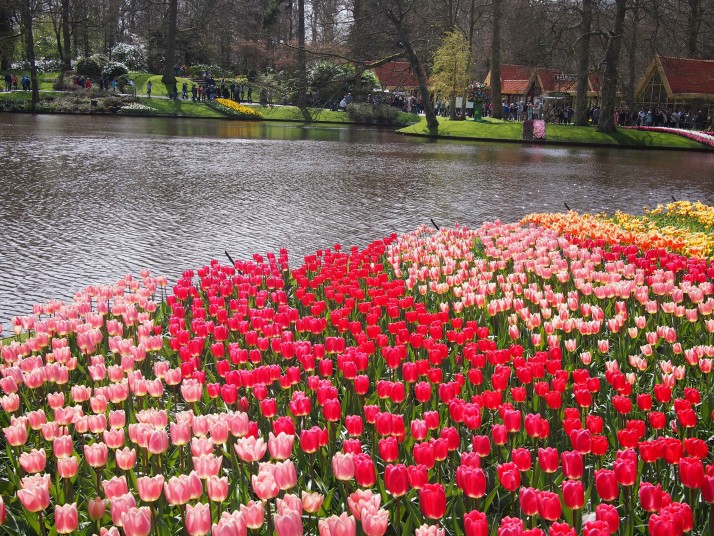 During our visit in mid-April, most of the outdoor tulip beds at Keukenhof were not yet fully open. An exception was this beautiful display beside the lake

It takes about 90 minutes, but it’s straightforward to get to the Keukenhof gardens from Amsterdam – get the bus to Schipol airport, walk around the corner and board the Keukenhof Express bus straight to the main entrance. We bought the combined bus and entrance ticket from one of the Canal Company ticket offices in the city – at €28.50 it’s actually slightly cheaper than paying separately and saves time queueing at ticket offices on the day of your visit. 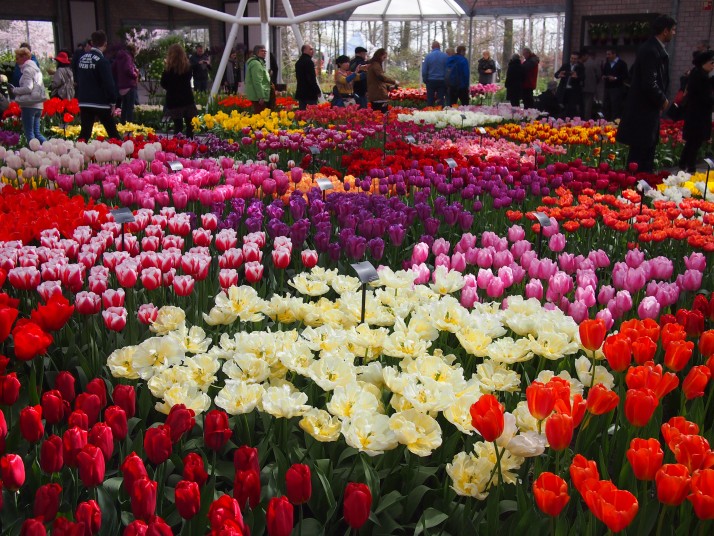 Squares of tulips in the indoor tulip display 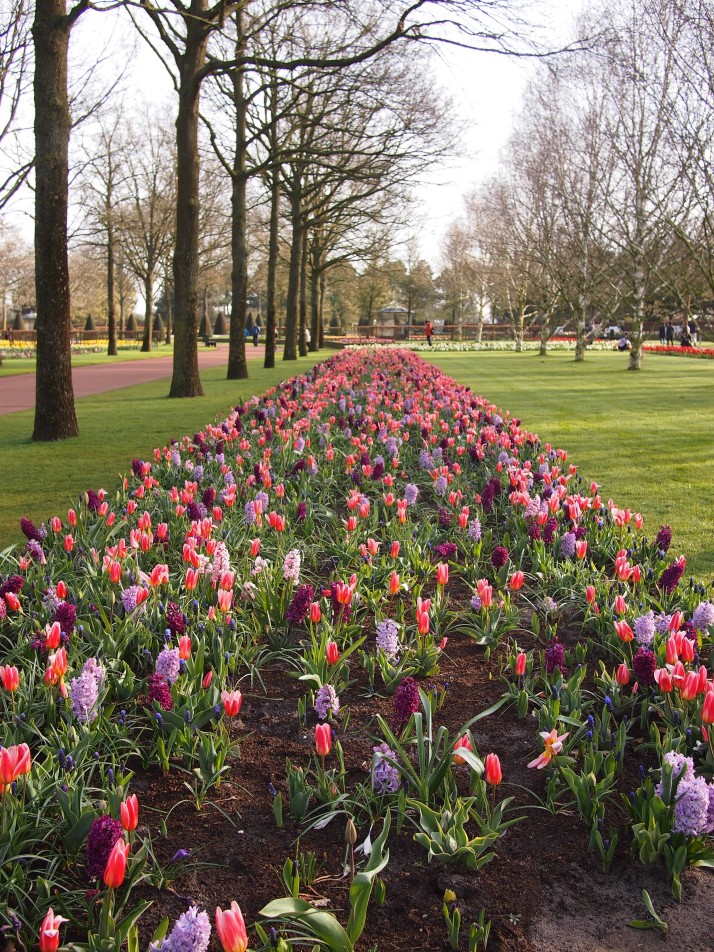 I really liked the mixed beds with their pretty complementary colours

Each autumn seven million bulbs are planted at Keukenhof. Although tulips are the headline act, the garden focuses on a whole range of spring flowering bulbs also featuring a wide variety of daffodils, hyacinths and crown imperials. This also means that there will always be something to see as the different flowers bloom at different times. Obviously the timing is heavily dependent on the weather in the preceding months. 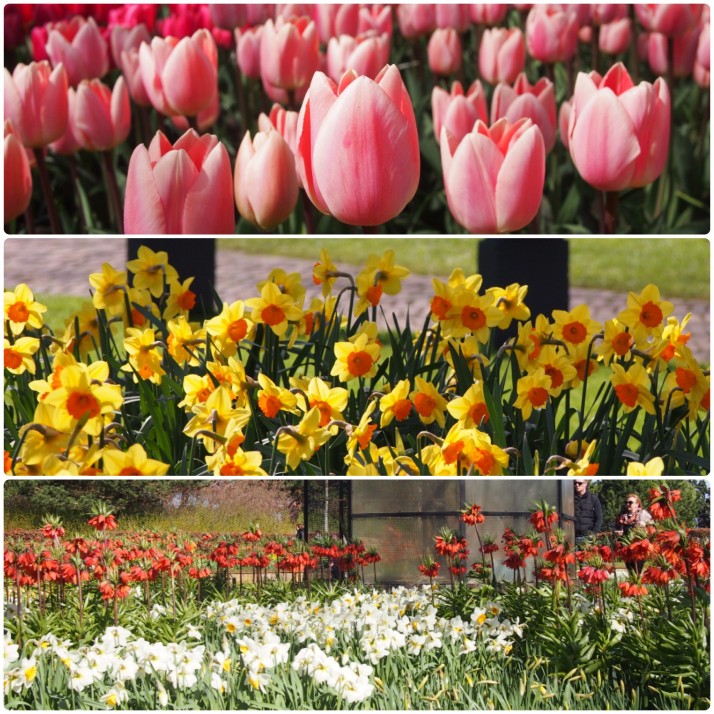 Keukenhof was filled with swathes of colour (top to bottom): tulips, daffodils and crown imperials 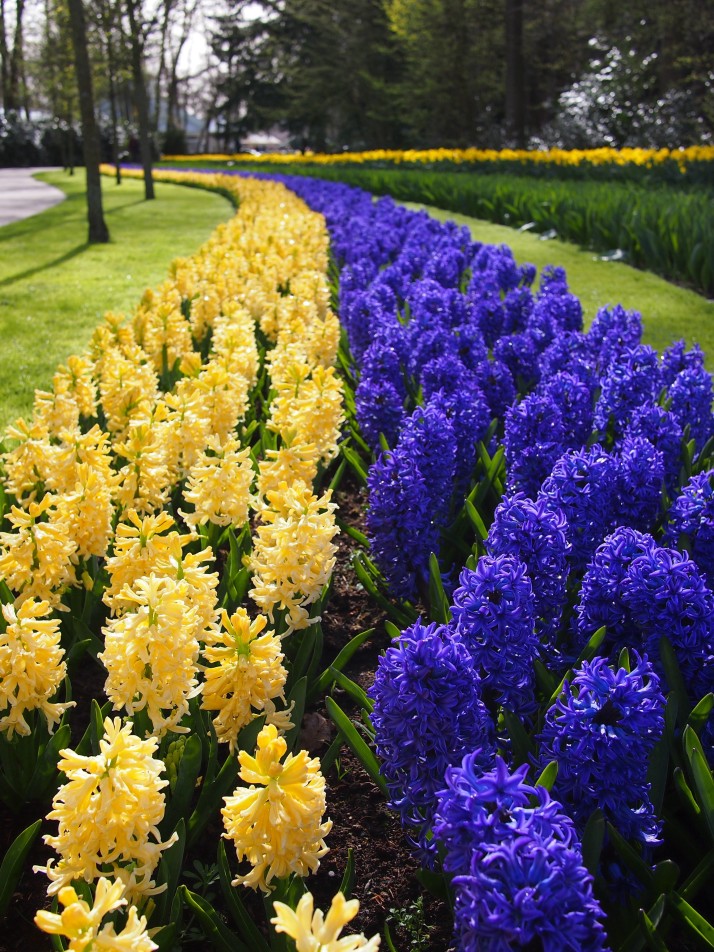 This ‘river’ of hyacinths smelt fantastic

To supplement the outdoor displays (and provide useful places to warm up on chilly spring mornings), there are three pavilions with flower shows. These change at various points through the season; when we visited one was dedicated to orchids, one to roses, and the main Willem-Alexander Pavilion had a mix of flowers including a wonderful range of tulips. 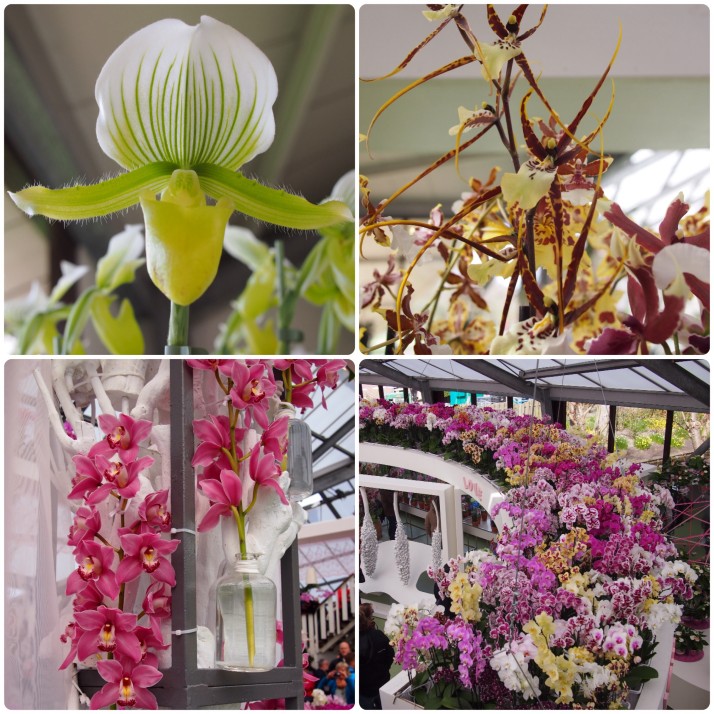 Orchid show in the Beatrix Pavilion 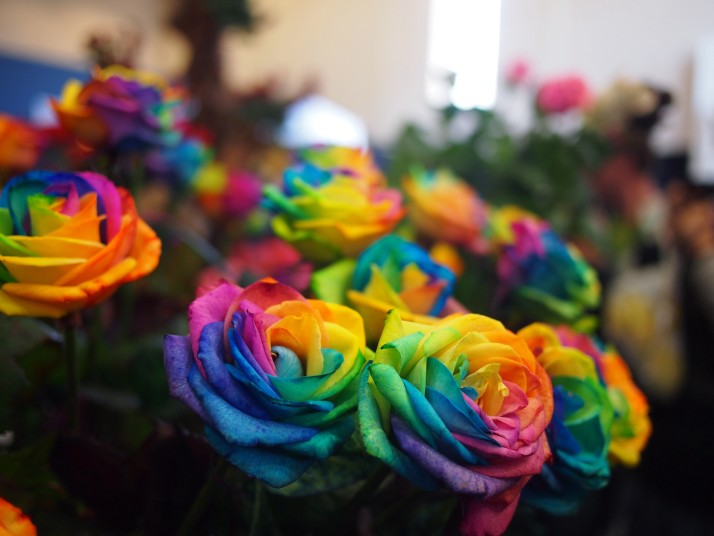 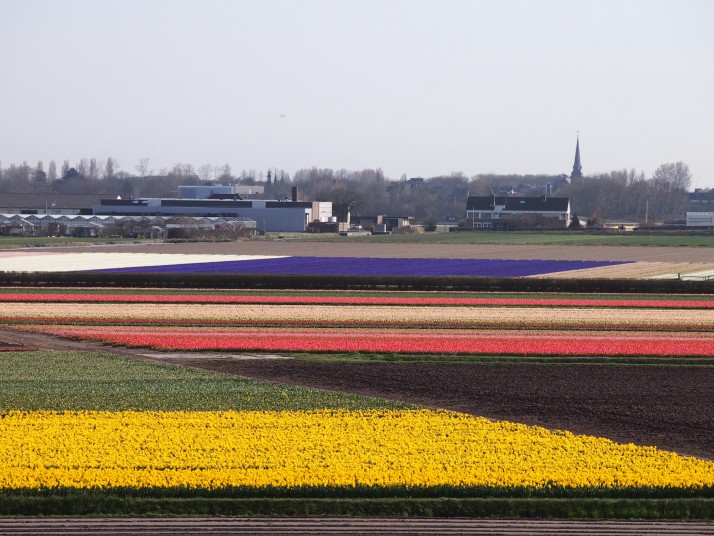 Bulb fields visible from the windmill at Keukenhof

This whetted our appetite for a bit more of an exploration into the bulb growing area, and what better to tackle such an enterprise in the Netherlands than by bicycle! We found a route online (PDF booklet in Dutch but the map is easy to navigate) which started outside Leiden Centraal station. The Dutch bicycle network is marked by a number of junction points from where arrows point off to the neighbouring nodes. Here I am at point number 77.

The ride through the countryside along well marked cycle lanes and through pretty little towns was nice enough in itself but before long we passed through Voorhout and into the start of the bulb field area. Cycling to the bulb fields (clockwise from top left): Some rather handsome hens beside the path; Julie passing a small windmill; bulb sculpture on a roundabout in Voorhout; Andrew cycling down the main street in Voorhout In the first fields that we came to was a group of workers picking bunches of tulips. This is quite unusual as most of the fields here are destined for bulb production not cut flowers 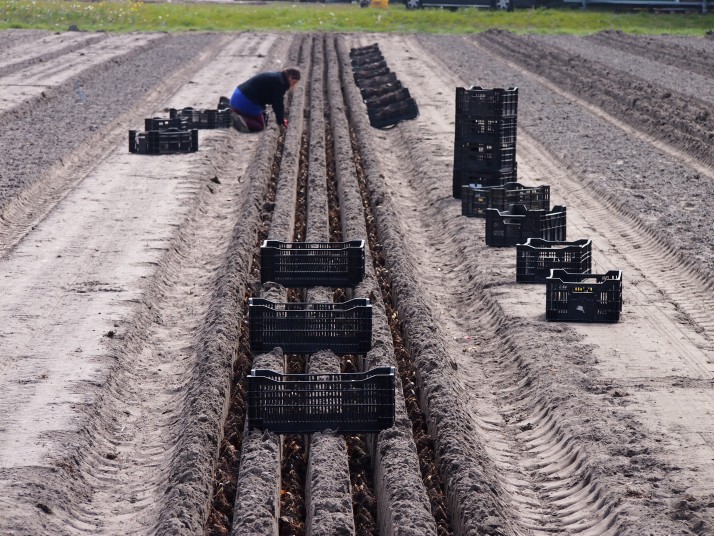 We came across one field where planting was underway

There were a few Dutch people cycling the paths as well but in general it was quiet until the route took us past Keukenhof and suddenly there were lots of tourists on bicycles (it’s possible to rent bikes at Keukenhof and do both activities on the same day). 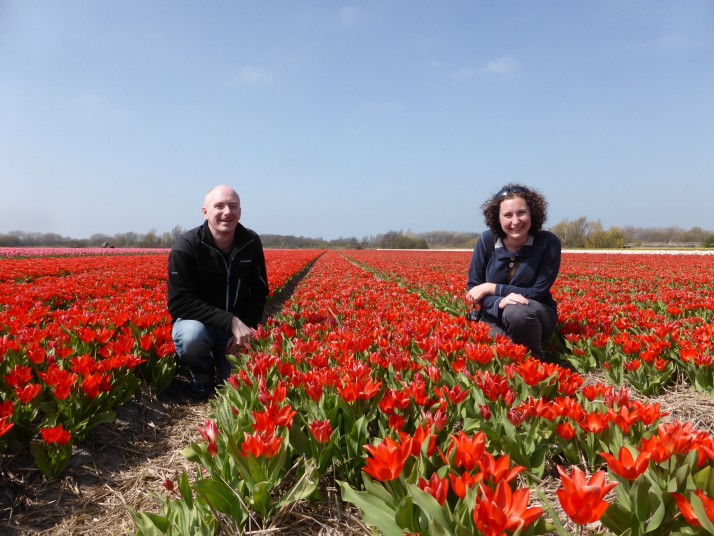 Keukenhof was an unmissable day and it was also extremely busy, the day of cycling was fun and felt more relaxed, but we’re glad we did both.