This is a guest post from our good friend Jo who came out to tour Vietnam with us. Take it away, Jo..

One of the things you’re Supposed To Do in Vietnam is Ha Long Bay, which has featured in several films – the one most people will probably have seen is Tomorrow Never Dies, that otherwise rather forgettable Brosnan Bond movie. It’s a vast area of tall karst (limestone) islands jutting out of the sea. It’s beautiful, and it attracts a lot of tourists. Every hotel in Hanoi advertises Ha Long tours and there are all sorts of options. 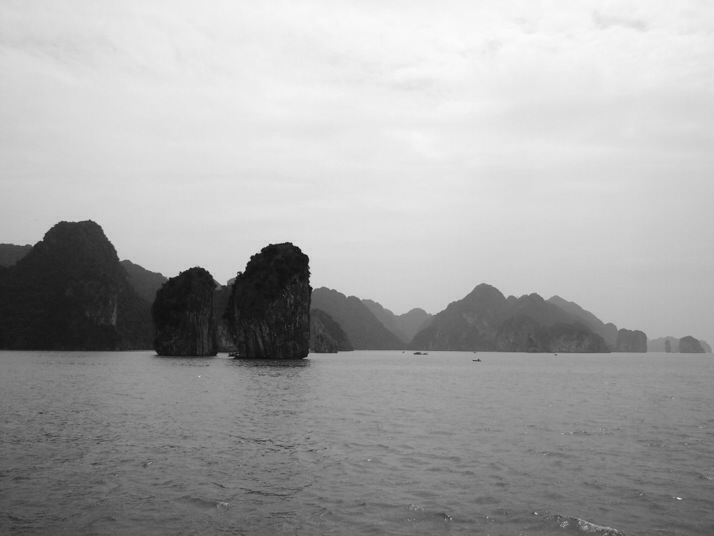 So we’d concluded, in doing our research, that we ought to see Ha Long Bay, but we were rather put off by the thought of hordes of tourists. However the ever-helpful Lonely Planet says that if you go to Cat Ba Island, you get to see pretty much the same scenery with far fewer people.

Cat Ba is reached through a long, but not too tedious, bus-bus-boat-bus trip which took about four hours. Our bus out of Hanoi was filled mainly with tourists, plus a few locals, and kept stopping as we left the city to cram yet more enormous parcels into the luggage lockers, deliveries for the city of Hai Phong. As we got into Hai Phong the bus stopped periodically for a very efficient off-loading of the goods. The whole thing was really well-organised, with only short waits as we transferred from one bus to another bus to the boat to another bus, and while long, it wasn’t at all tiring.

The town of Cat Ba is small, a bit developed and a bit touristy, but very quiet this time of year. After checking into the hostel we headed uphill for a view from Fort Cannon. Built in the 1940s by the Japanese it was then used by the French and Vietnamese. The view was a bit hazy and we felt the 50,000 dong (£1.47) charged for entry was a little steep, but we did have fun exploring the old bunkers and taking pictures of the cannon and old armament boxes. 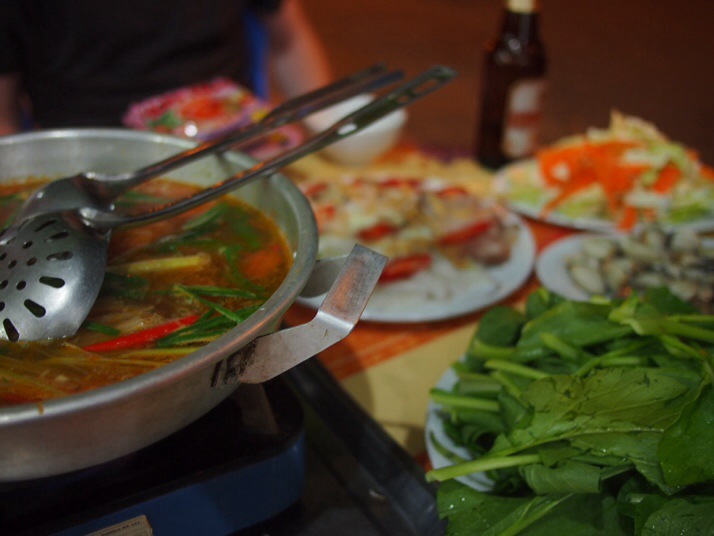 Dinner in town, after a beer by the seafront, was destined to be seafood hotpot. We caved when one of the restaurant owners who’d previously talked to Julie as we got off the bus gave us his patter, and we were glad we did. We got a dish of broth flavoured with lemongrass, ginger and spring onions, some packet dried noodles, a plate of water spinach, another plate of cabbage and carrot, a plate of clams and one of fish, squid and prawns. You cook the raw food in the hot broth as it bubbles away on a hotplate. It was utterly delicious, even when a small bug jumped out of the water spinach and committed suicide in the broth – anyway, by that point we were stuffed.

In the morning we were up early for our day’s tour out to Ha Long Bay and the closer Lan Ha Bay, which has much the same sort of formations. It was a windy day – further south, we later discovered, Central Vietnam was being battered by Typhoon Nari – but we got on the boat and chugged out into the harbour. Just before we exited, through a channel between two rocks, it was starting to get a bit rough and a couple of big waves came crashing over the open bows of the boat. The pilot promptly turned around and they called for a bigger boat. 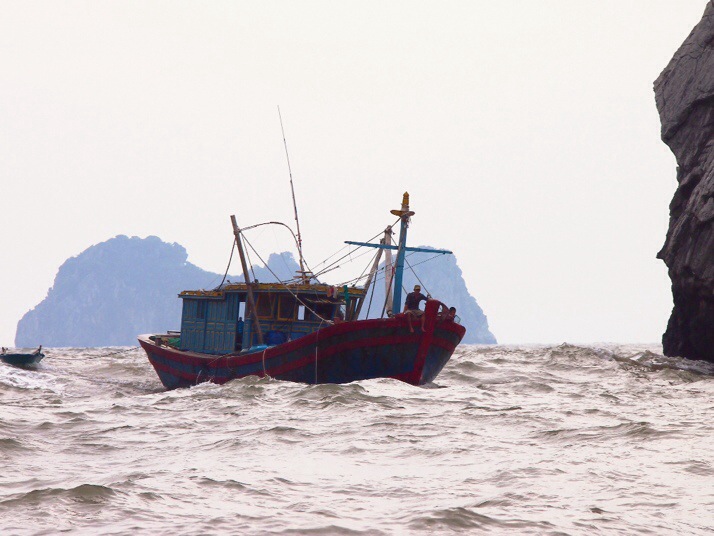 Fishing boat coming back through the channel

Once on board the bigger boat, our group of 20 spread out on the upper deck and off we went again. She rocked and rolled for about half an hour before it got calmer and more sheltered, and about that time the scenery went from “oh, that’s nice” to “wow”. We cruised through the karsts for perhaps two hours, past floating fishing villages and waving at passing fishermen, moving from Lan Ha to Ha Long. 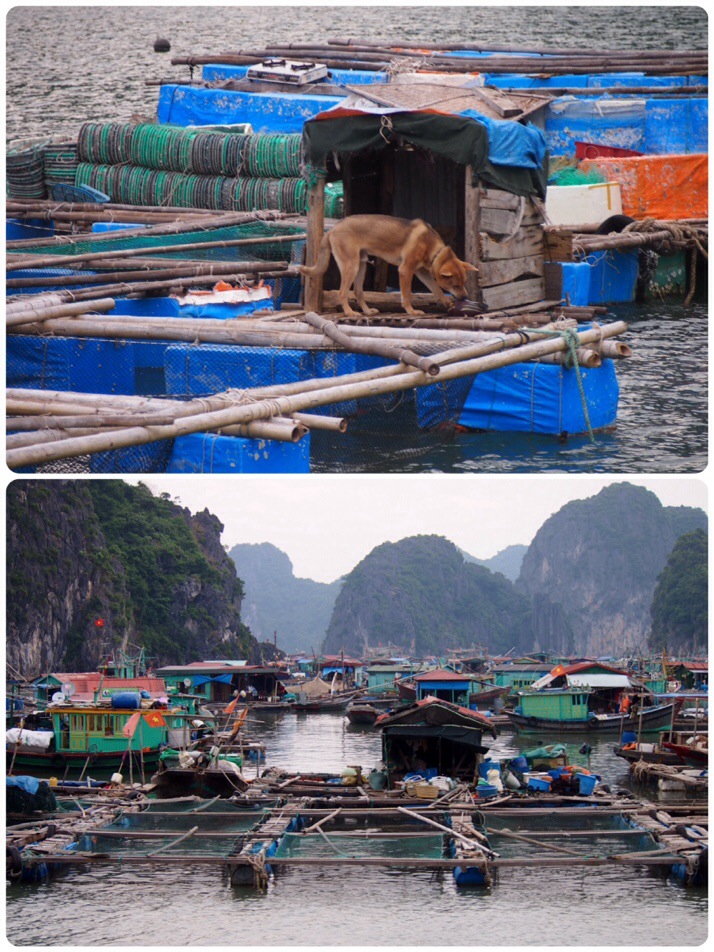 The group was a mixed one; there were a couple of Yorkshire blokes, a nice English couple, some crazy Italians, a French and Israeli couple, two German lads and a young Vietnamese couple. The Vietnamese girl astounded me and Julie by appearing in properly high heels, though she had also managed to pack a bikini for the watery parts of the trip.

Just before lunch we pulled up – with a couple of tries – next to a karst island, and scrambled ashore into a cave in the middle of the rock. I would not recommend flipflops for caving, but there were some spectacular stalactites and stalagmites hidden in the darkness. 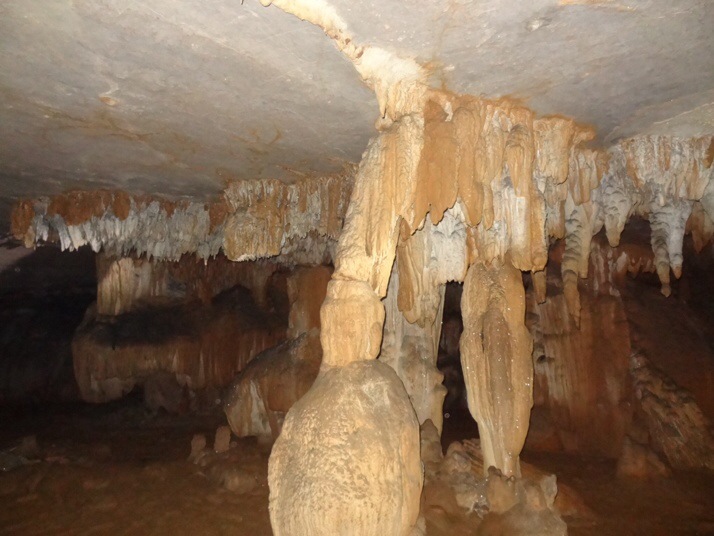 Lunch was a feast of rice, fish and some pretty good spring rolls. Shortly afterwards we got the chance to work it all off with a spot of kayaking. Sadly, they had no one-man kayaks so I had to manoeuvre a two-man by myself. We loved this bit of the day, kayaking through arches in the rock with bats squeaking over our heads. Then there was a swimming stop, where I failed to jump off the edge of the ship but Andrew, encouraged by one of the Yorkshire men, leapt off the very high stern into the warm green water. 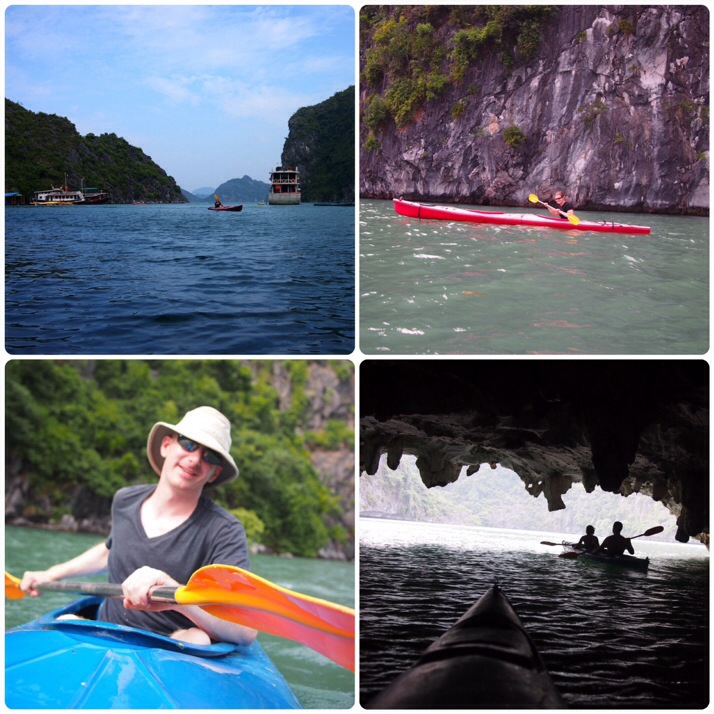 We cruised home, happy, coming into port past an enormous floating village – a town, really, with canals separating the floating houses.

On day two the wind had got up even more. With most of the day to use up before the bus we planned to get back to Hanoi, we rented scooters for a tour of the island.

While Andrew has a proper bike licence and has ridden big motorbikes in the past, my scooter experience consists of tootling very slowly around Aitutaki in the Cook Islands a few years back, and Julie had never been on one before. It turned out we were basically borrowing people’s personal scooters – I had one which belonged to the hostel receptionist – which just added to the nerves. They spent a while showing us how to start and brake, and fiddling with the dodgy battery on mine, before waving us off.

Actually once we’d got through town and the random people stepping or turning out in front of us it was pretty easy riding, with the traffic predominantly two-wheeled save for the odd bus or truck. By the time we made our first stop Julie and I were feeling much more confident.

That stop was at Hospital Cave, built by the Vietnamese with help from China in the 1960s. It acted as a hospital and hide-out for the Vietnamese forces, and as well as a first-floor network of concrete bunker-like rooms there’s a huge second-floor cave, with space for a cinema and a small swimming pool, and a third floor we weren’t taken to by our guide. It was a bit bare and damp, but you can imagine the claustrophobia of being hidden away there from the American bombing. 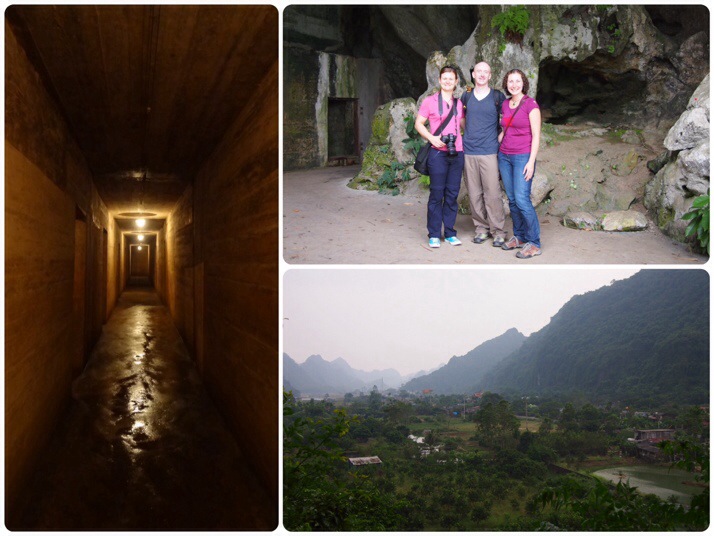 Inside and outside Hospital Cave

Then we continued on our way, doing a loop inland and then back along the coast, via ‘butterfly valley’ – in fact there are lots of stunning butterflies everywhere on Cat Ba, from small yellow and blue ones to enormous, velvety-black specimens. Sadly the really big ones never sat still for long enough to have their photograph taken.

We stopped for lunch in a small village, randomly picking a place with a sign outside it. The family seemed a bit surprised at suddenly having three Western customers, but set to and delivered us three bowls of (instant) noodle soup with mystery meat and a bowl of the herbs you put in soups here. None of us could decide what the meat was; it was vaguely liver-y but also fatty. 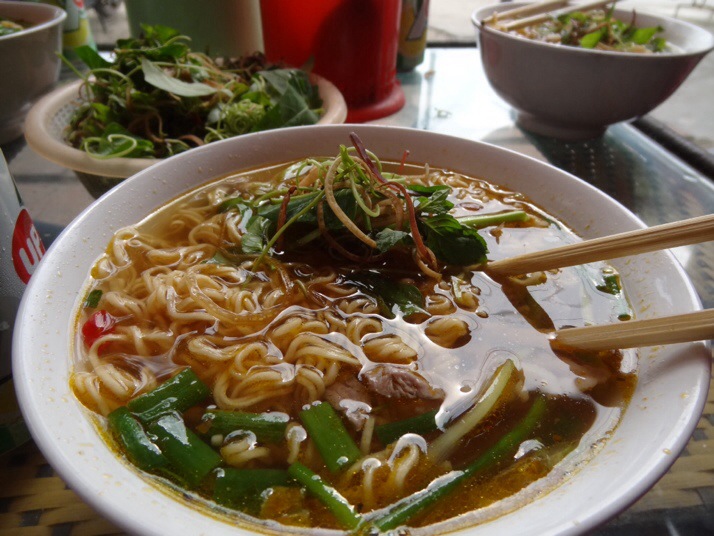 With a little more petrol in the tank (though not quite enough, I had to top up by buying a water bottle full on the way home) we decided to head back up our original road and then carry on north as far as that road went. It was a good idea – the scenery was stunning, through deep valleys of bush-covered karst, out to the sea at the end of the road. 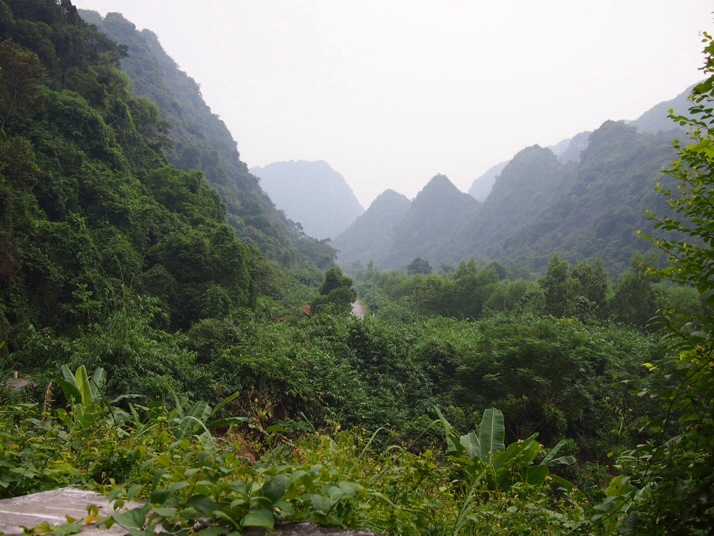 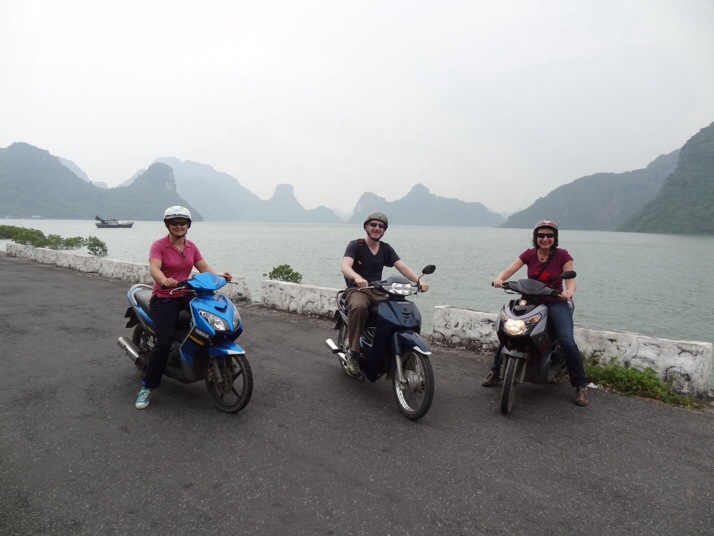 At the end of the road

We ended our Cat Ba stay with another bus-boat-bus-bus combo, only this time with far more locals than tourists. The Haiphong – Hanoi leg was slightly crazy. We were ushered on to the bus at the side of the road without even being allowed to put bags in the luggage compartment, so we all piled bags on an empty double seat. But then more people got on. And more. The conductor pushed bags into laps and set out little plastic stools in the aisle, and at various points en route to Hanoi more people would get on and off. At journey’s end, we were nabbed by a taxi driver with a rigged meter who tried to charge us three times the going rate for the trip to the train station, and there we waited for the overnight to Dong Hoi. But that’s another blog.