The area around the small town of Bagerhat in southwestern Bangladesh is home to more ancient mosques and mausoleums than anywhere else in the country apart from Dhaka. We visited as a day trip from the Division capital of Khulna and after an hour on the cramped bus we got off beside the centrepiece, Shait Gumbad Mosque, which dates from the 15th century. Its name is misleading, it means ‘Temple with 60 Domes’ but actually there are 77. We arrived just after it opened at 9am so there were few people about and we had the shady columned interior almost to ourselves. 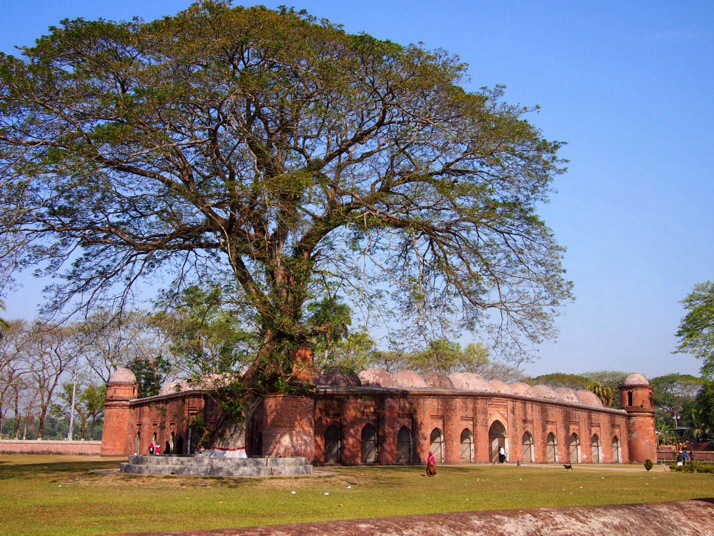 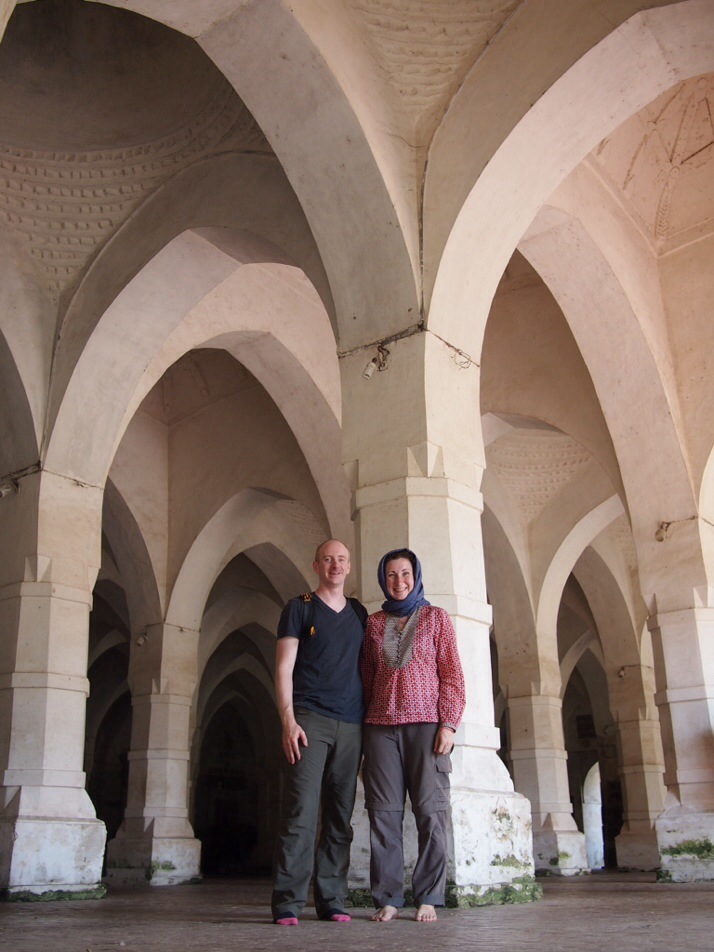 Us inside the columned interior of Shait Gumbad Mosque

After a quick pitstop at a nearby tea stand, we followed the path around the pond behind the mosque, passing through a small village with locals calling out hello and children following behind (this is normal if you’re a foreigner in Bangladesh…). There are two more ancient mosques hidden away in this village. We could only get into one, but the exteriors were both beautifully decorated with bricks patterned with plants and trees. 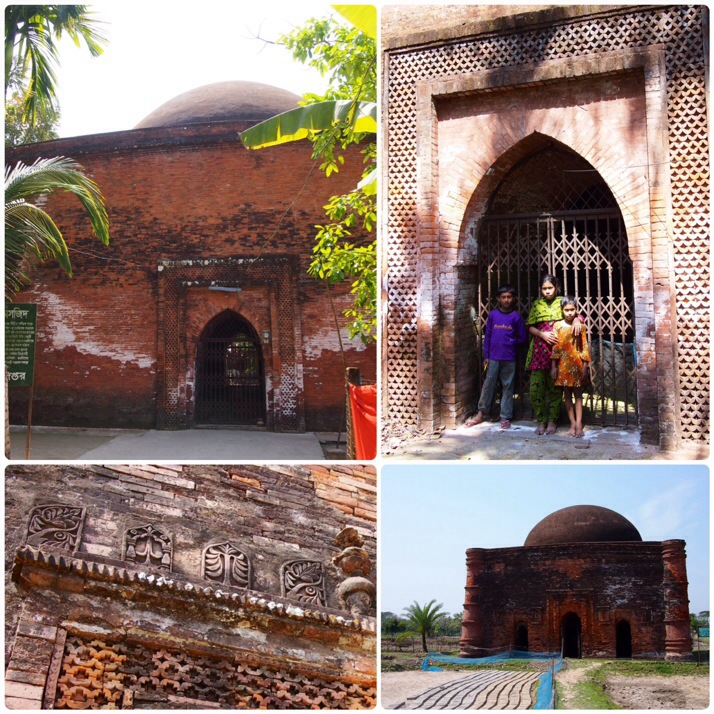 The walk between them passed by a small patch of open ground where in the UK you might find kids playing football, but in Bangladesh cricket is the national obsession so here there were a group of boys with bat and ball. Andrew was persuaded to go in to bat much to the boys’ delight, but after knocking the ball into a nearby pond (a boy jumped in to retrieve it) and then shouting ‘England vs Bangladesh‘ they brought out their best spin bowler and Andrew didn’t stand a chance! 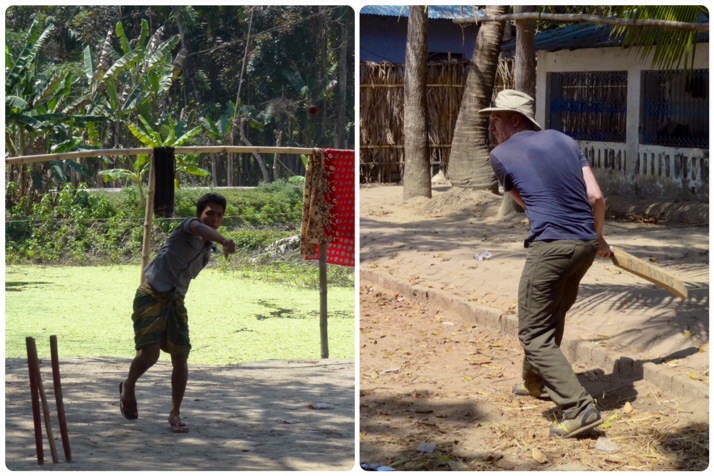 A short walk down the road brought us to the Mausoleum of Khan Jahan Ali, the man who decided to make his capital at Bagerhat and who is behind the creation of most of the historical monuments still there today. His tomb was busy with local pilgrims and women weren’t allowed inside the building (Andrew went in alone and reported that it wasn’t anything very exciting although he wasn’t allowed to leave until he’d made a ‘donation’). The large nearby pond is the home of a 100 year old crocodile who, according to the Lonely Planet, has become a bit of a tourist attraction. Unfortunately he didn’t put in an appearance for us although we got to see the taxidermied remains of his companion which died in 2011 and is preserved in the small Bagerhat Museum in the grounds of Shait Gumbad Mosque. 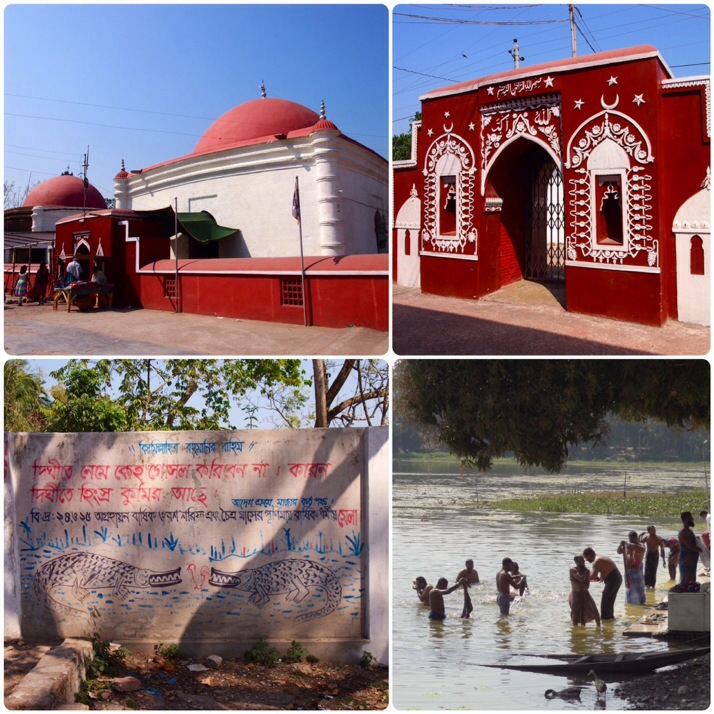 Clockwise from top left: Mausoleum of Khan Jahan Ali, decorated gateway in the mausoleum’s perimeter wall, there were a lot of people bathing in the pond considering it has a crocodile in it, there’s a handy picture on a wall beside the pond so you know what to look for…

Near the mausoleum are a couple more mosques, the Nine Domed Mosque which is a pleasant walk along the side of the pond, and Zinda Pir Mosque which has a number of tombs in its grounds. 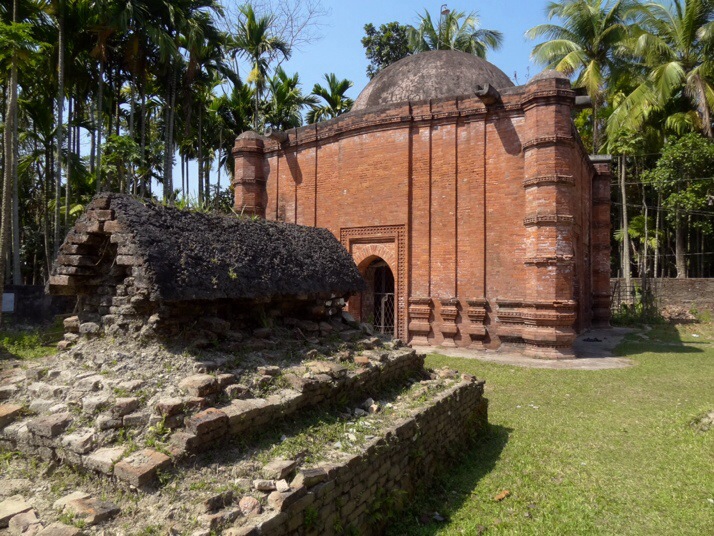 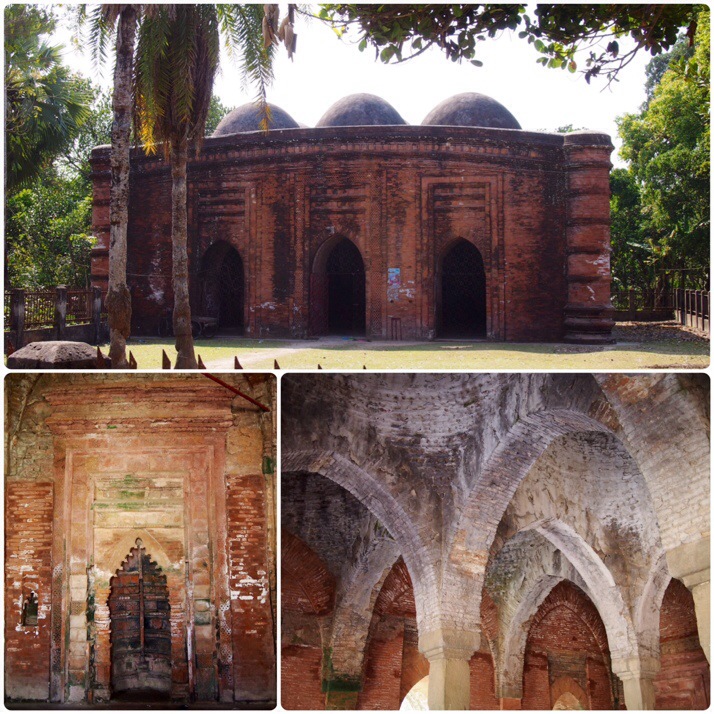 The final mosque that we visited was Ronvijoypur Mosque. Again away from the main road, this one took a little more finding as a crucial signpost was missing but eventually, after enquiring ‘masjid? masjid?’ to several bemused locals, we got there. The 11m wide dome is the largest in Bangladesh and is supported by 3m thick brick walls. 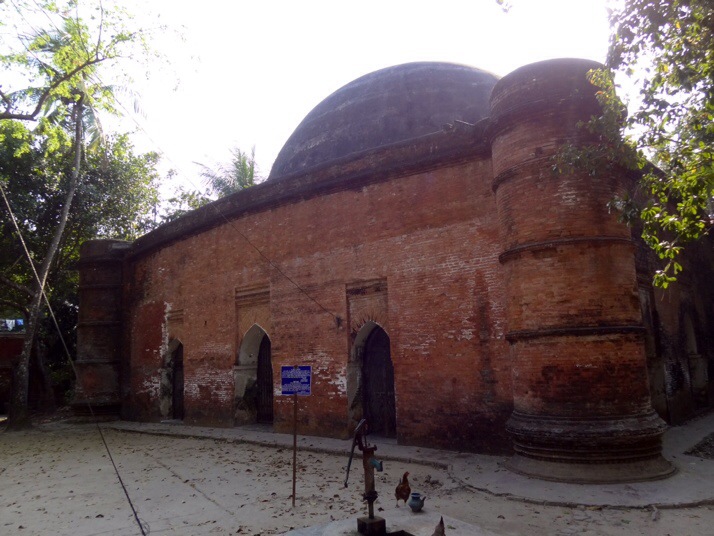 Ronvijoypur Mosque and its impressive dome

After the chaos of Dhaka it was great to see a little of what rural life in Bangladesh is like by wandering the narrow roads and villages between the mosques. Bagerhat was also our first taste of the rich history of Bangladesh and definitely whetted our appetite for more with its well preserved buildings and lack of tourists.

2 thoughts on “Village life and ancient mosques in Bagerhat, Bangladesh”