There are a lot of tourists in Amsterdam and it’s hard to feel like you’re not somewhere that thousands of people have been before (or actually are right now, standing in front of you, with their cameraphones at the ready), but we think we managed it at least once. Amsterdam’s Street Art Museum is in the Nieuw West district at almost the westernmost point of Amsterdam’s tram lines, in any case at the very end of line 13. And that’s where we met up with our guide Anna and the Dutch couple who were also on the tour. 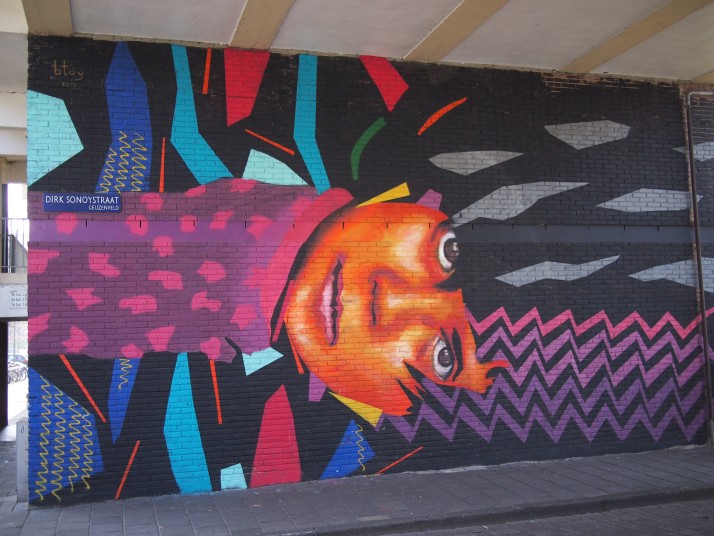 Anna has an interesting biography, she grew up in the Ukraine under the Soviet Union, left at 18 to live in London before moving onto Amsterdam, Brussels and New York before settling again in Amsterdam nine years ago. A few years later she quit corporate life to found a Street Art Museum… 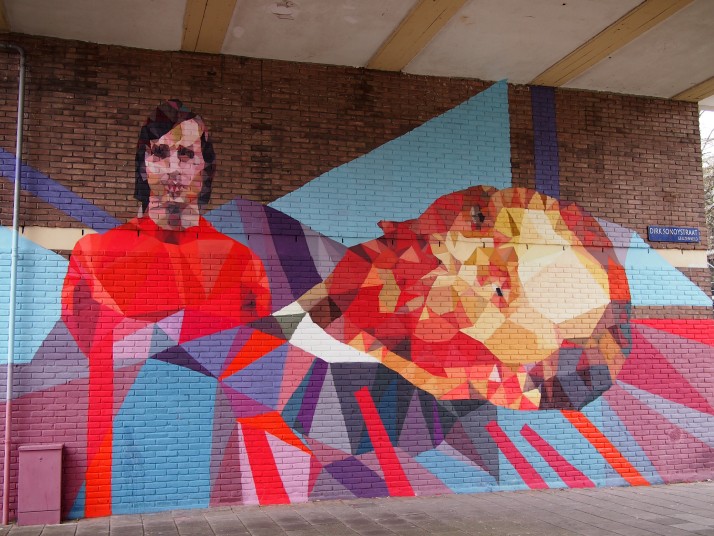 Right across the street from ‘Dimension’ are a couple of familiar faces, Johan Cruyff and Van Gogh, by Uriginal

If you have a read about on the museum website you’ll find something saying ‘No we don’t have a map. We have tours’. We initially thought, OK fair enough, but in the end, stunning as the art on the walls is, it was Anna’s stories that really brought them to life. Talking essentially non-stop for three hours (and just try to get a word in!) she told us what the paintings mean (to her, to the artist, to the community), about the artists themselves and their often atypical lives, and about the difficulty of bringing the works into being. 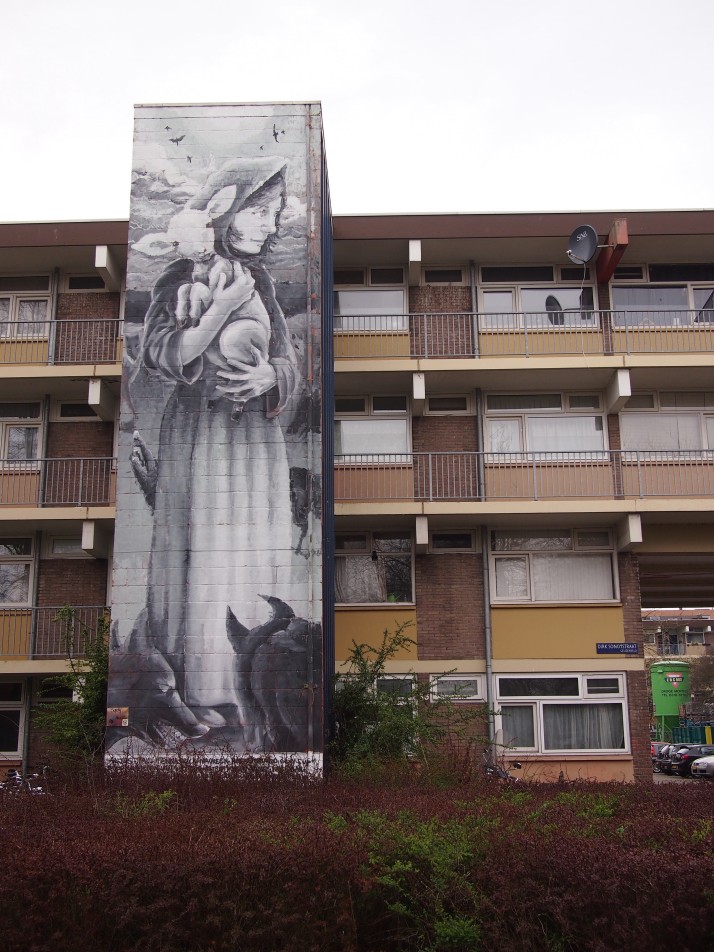 Not all of the walls are bold and bright, take for example the delicately beautiful ‘Safety’ by Alaniz 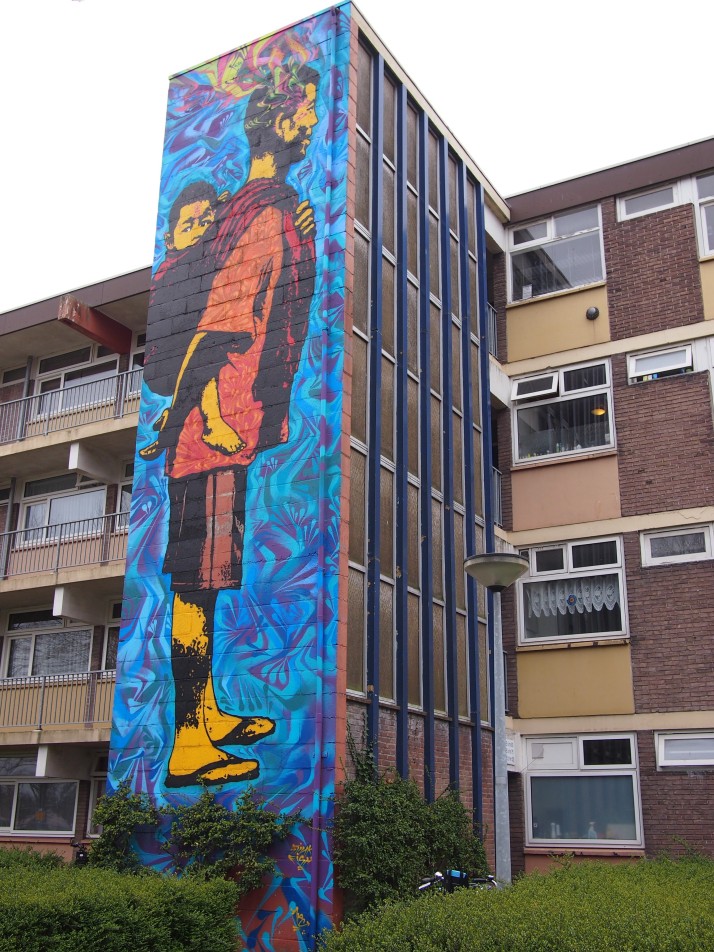 The most shocking aspect to me was the funding, the typical amount received per wall seemed to be about €2000, seems reasonable I thought, then Anna told us that the lift rental is €800, the paint cost €600, and the artists’ plane tickets were €400 meaning that there is barely any money left over for the artist, never mind for Anna and her tireless efforts at chasing through the bureaucracy. Oh, and while they’re in Amsterdam, the artist stays in Anna’s spare room! 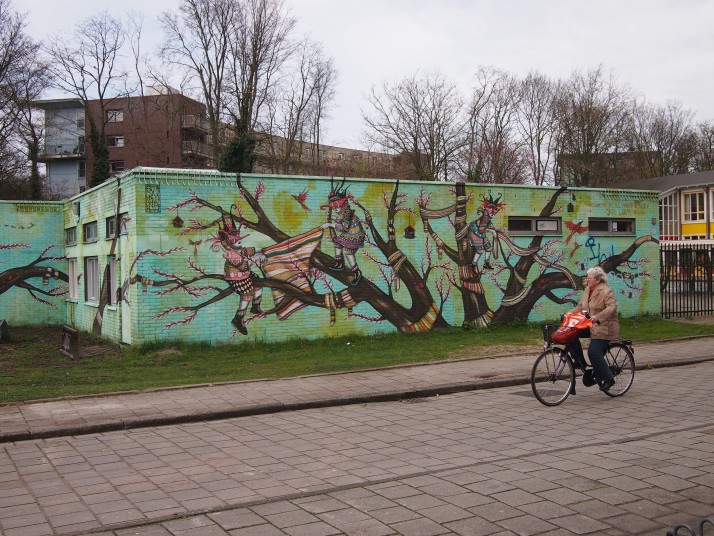 Having seen Johannes Vermeer’s famous ‘The Milkmaid’ in the Rijksmuseum we loved ‘Glory’ by El Pez and Danny Recall. 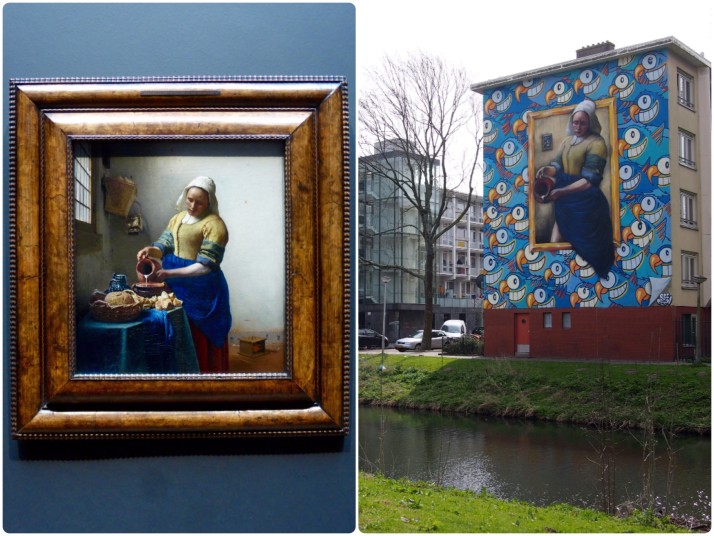 Vermeer’s ‘The Milkmaid’ in the Rijksmuseum and the Street Art Museum version showing a cheeky bit of leg and surrounded by colourful parrots!

The timelapse video of the creation of ‘Glory’ is jaw-dropping… (video credit: Anna Stolyarova) 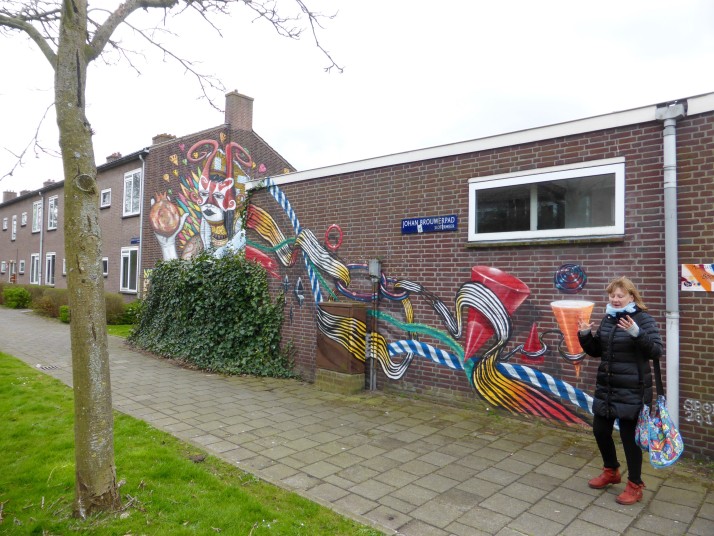 Anna in front of ‘Altruism’ by Spok with ‘Fertility’ by Skount in the background. These pieces will soon be lost as this housing estate is slated for demolition. 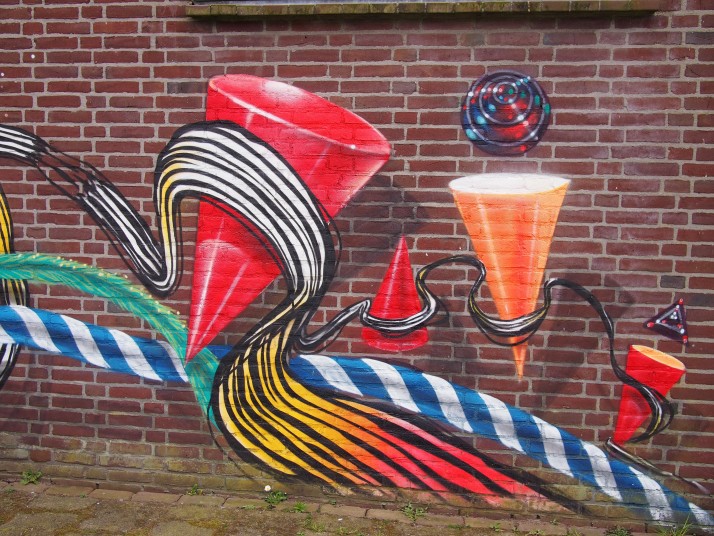 Detail of ‘Altruism’ by Spok. His technical skill is really obvious here, this is all done with spraycans, just look at the depth and range of colour that he’s managed to achieve 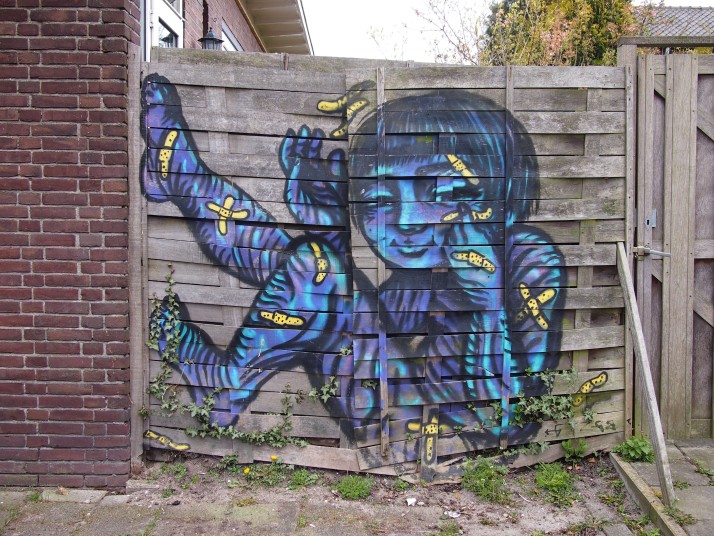 ‘Pain and Relief’ by Bastardilla was the museum’s first work 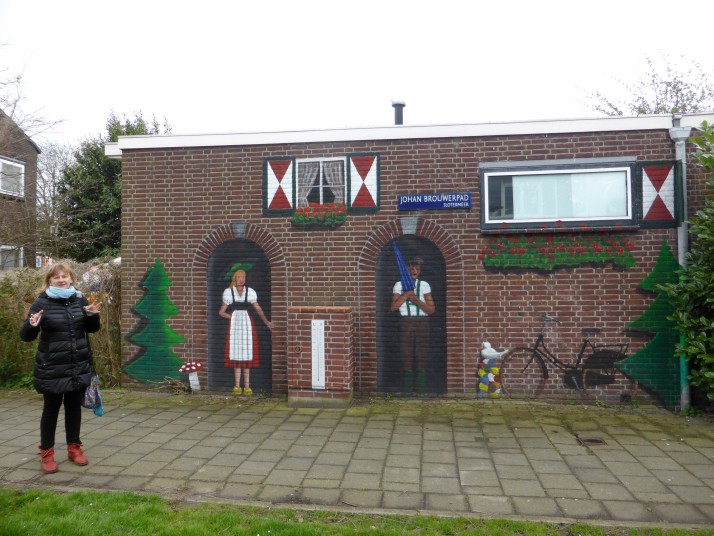 When a 60 year old professional mural painter approached her to contribute a work to the museum, Anna was keen to see what he would do. This version of a traditional Dutch weather clock took longer to complete than any of the museum’s other walls – notice how meticulously measured all the bricks on the painted telecoms box are! 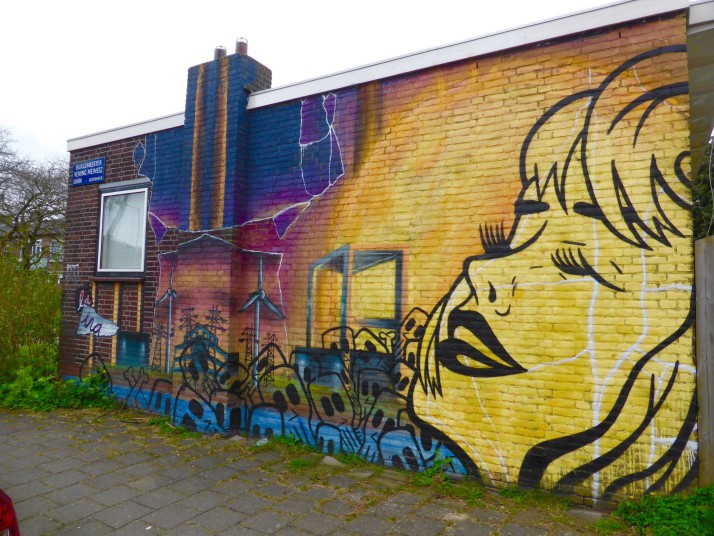 Towards the end of the tour was an area with some smaller works, all by different artists and very diverse. I love ‘Let Her Be Free’ with a woman in a headscarf of birds by Iranian duo Icy and Sot, she’s the new lock screen on my iPad (bottom left on the collage below). The last wall that we visited was ‘Tolerance’ by Alaniz, a nice nod to the multicultural diversity of Nieuw West. Anna sees the community as an essential part of the museum’s work and actively looks to include residents in the process. She explained how before any work begins they go door-to-door to speak to all of the building’s residents and get their approval of the plans, as well as encouraging them to visit during the work and inviting them to a completion party. 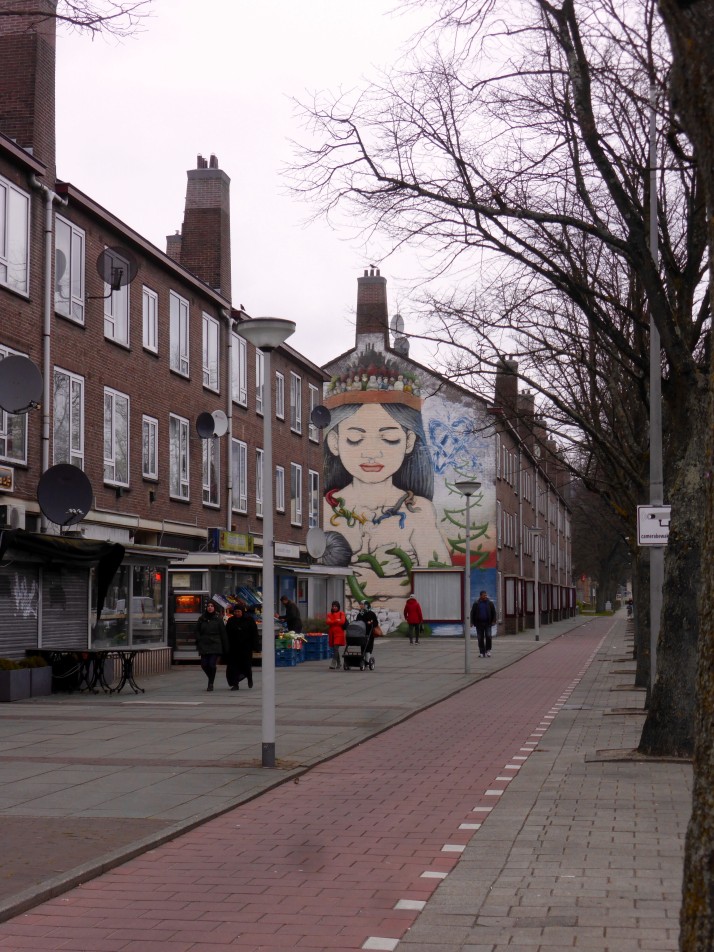 You can book a tour of the Street Art Museum Amsterdam through the website, we highly recommend it.