We spent a couple of weeks in South Korea’s capital city at the start of the rainy season. As well as the excellent DMZ tour with the USO, and learning how to make kimchi, here are some of the things we got up to in and around Seoul.. 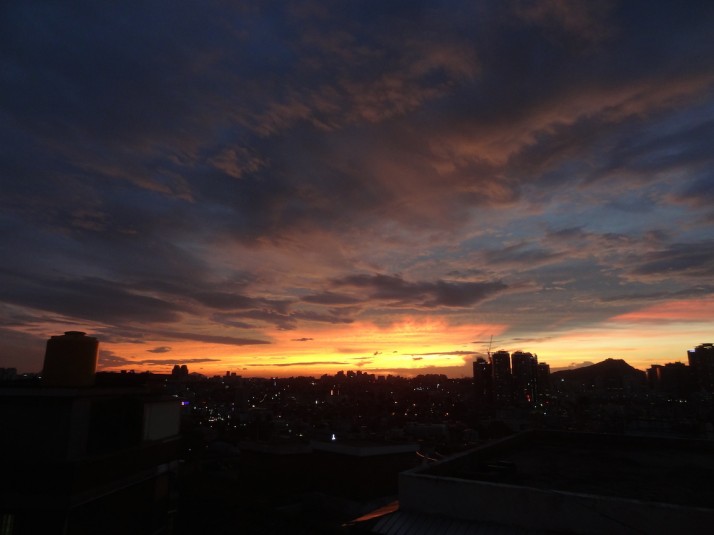 Sunset from southern edge of Namsan Park looking over south west Seoul, just up the hill from our apartment 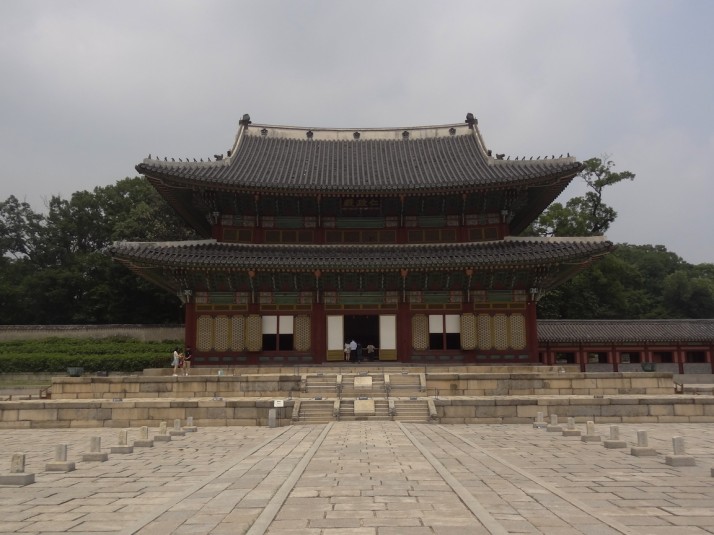 Injeongjeon Hall (a National Treasure) – is the throne hall of Changdeokgung, it was used for major state affairs including the coronation of a new king and receiving foreign envoys

Completed in 1412, Changdeokgung is a UNESCO World Heritage Site and one of the “Five Grand Palaces” built by the kings of the Joseon Dynasty (1392–1897). Although it has been destroyed many times by war and fire, nearly 30% of the buildings are original and the rest are either being restored or are completed. We started in the administrative quarter and were surprised by how many beautifully ornate buildings there were. 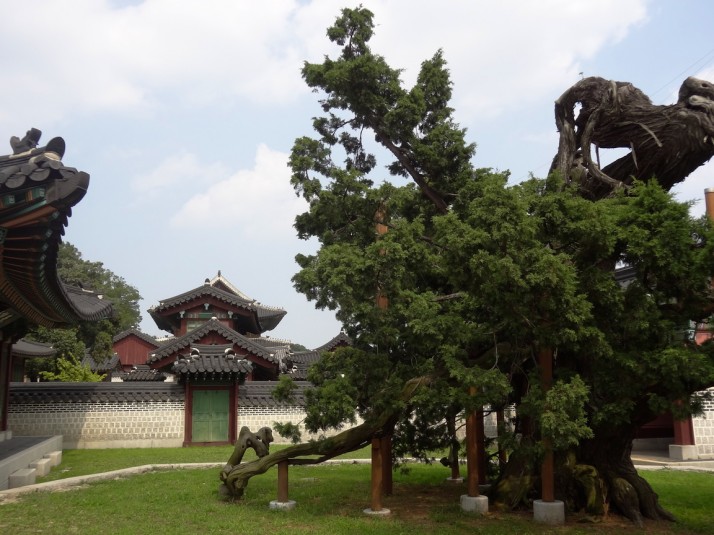 Old tree in the administrative area of the Changdeokgung Palace

After making our way through the main gate and up to the mightily impressive Injeongjeon Hall, we had a quick look around the King and Queen’s residences and yet more administrative buildings before heading to Huwon, also known as the Secret Garden. 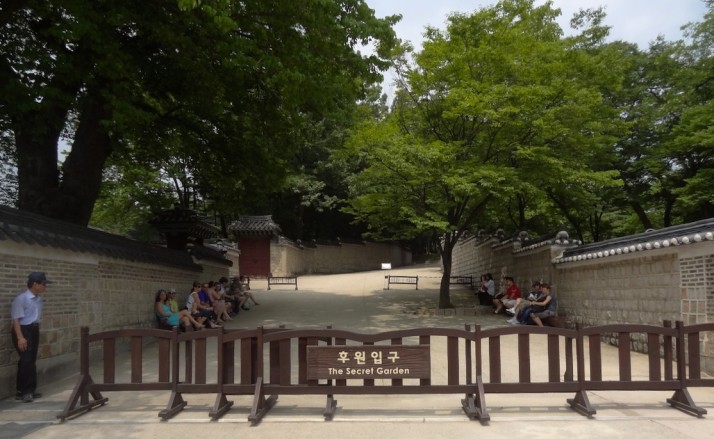 Starting the guided tour of the Secret Garden. Tours are arranged by language, and the English ones are booked up a few days in advance – best to book online before you go!

We’ve become accustomed to the Asian definition of “garden” being a meticulously manicured space, but in Korea, it seems that nature has more of a hand in the planning – of the ones we’ve visited at any rate. The Secret Garden is so-called because it was reserved for royalty and their guests, and, really, I’d call it a forest: firstly because it’s huge – almost twice the size of the palace grounds; and secondly, visitors would have ridden a horse or have been carried around it, stopping at pagodas to admire the small set pieces of scenery. This explains the scale and the lack of view for strollers. 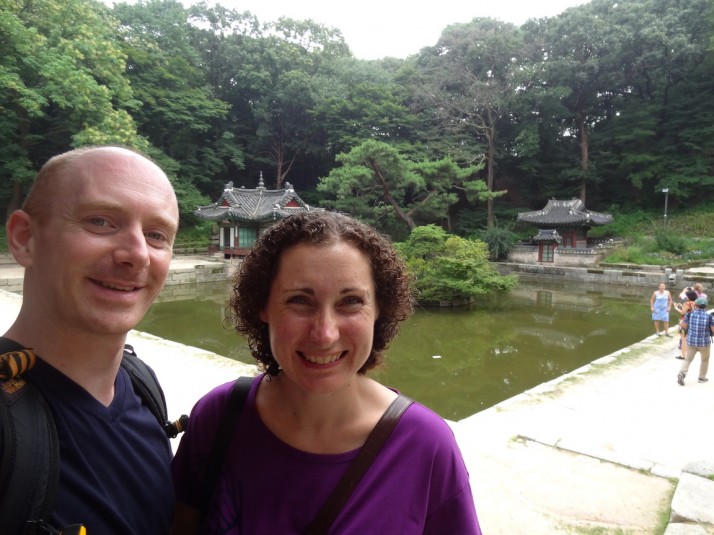 Us in the Secret Garden. In the background is the Buyongjeong pavilion, a recently restored National Treasure of Korea

Access is by guided tour only, and our bubbly guide was very good, but there were a lot of people in the group and we found we had to be near the front as she would start the explanations as soon as she arrived at each point of interest. We missed a lot of the introductions, and we were by no means at the back! 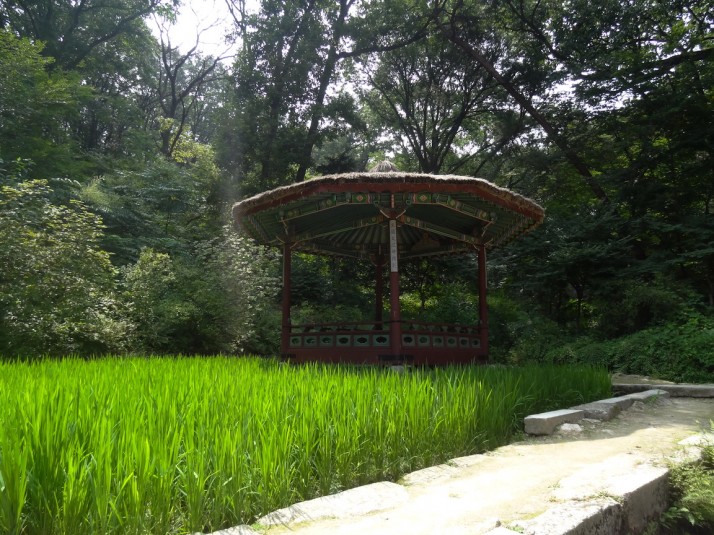 This pagoda seems to float on a field of rice 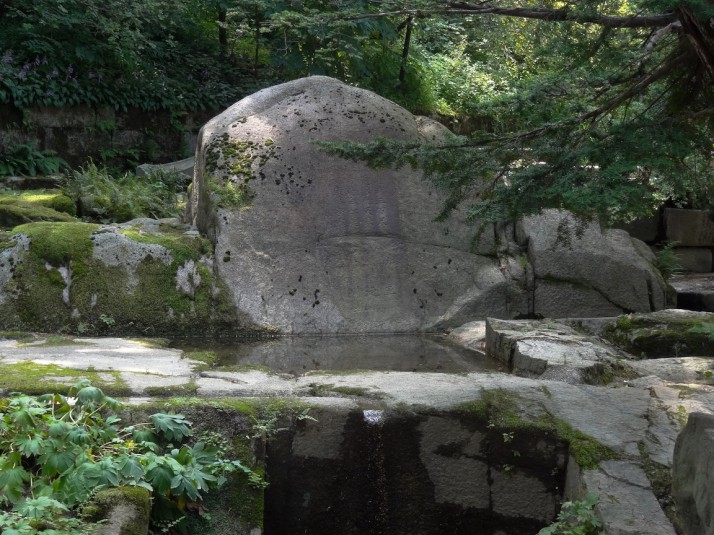 Hwaseong Fortress walls, looking down at the Hwaseomun west gate

We’ve done quite a bit of hiking in Korea, and after the 13km of the Geumjeong Fortress hike we did in Busan, we figured the 5.7km of the Suwon Hwaseong Fortress south of Seoul would be a nice stroll in the park!

It was a lovely clear day, but it was hot work as we elected to go clockwise from the Paldalmun – the main south gate, which meant we had a steep climb followed by a gentler descent. We took it slow and were rewarded with lovely views of the city and the old walls snaking around the centre. The climb, starting at Paldalmun past NamChi and NamPoru watchtowers to the SeonanAmmun secret gate A lovely park with a lotus pond just outside the walls, with DongbukGaknu pavilion on the left

About two-thirds of the way round is a visitor centre where we stopped for some shade and a well-deserved ice-cream. Here they offer basic archery tuition as the site was historically used by soldiers for combat training. 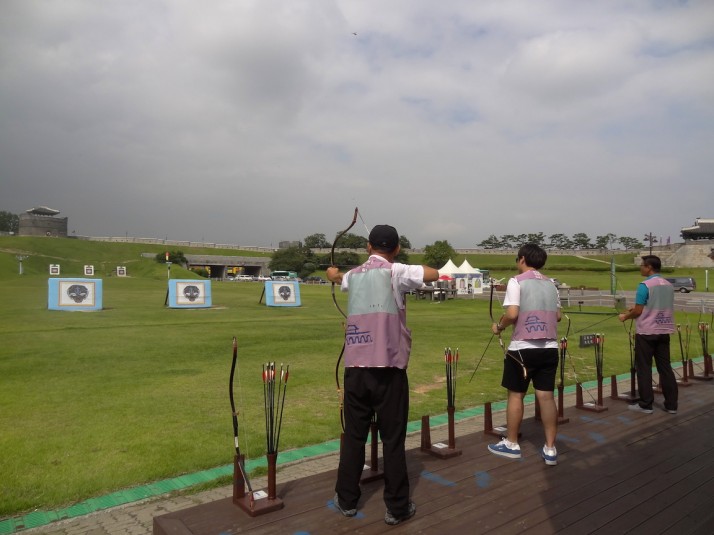 The archery instructors giving a quick (and very accurate) demonstration in front of DongbukGongsimdon. “Gongsimdon” means an observation tower and its design allows for spotting enemies inside the walls The National Museum of Modern and Contemporary Art (Gwacheon branch)

Set in the Grand Park, which also contains a zoo and a theme park called Seoul Land, the National Museum of Modern and Contemporary Art is a delight. Not only are the permanent collections free (bonus!), but it’s well laid out, had a fascinating and varied collection of artworks on display, and features a sculpture garden in its grounds. 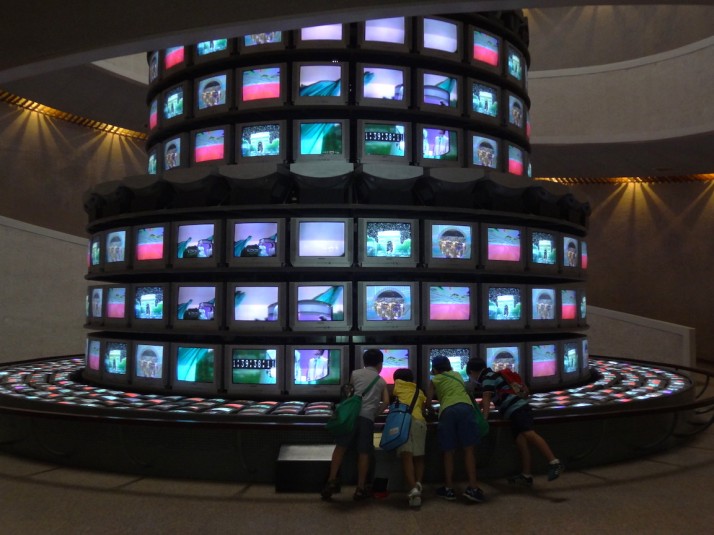 Kids enjoying the centrepiece of the museum – “The More, the Better” by Dadaikseon, 1988 – produced in celebration of the Seoul Summer Olympics of the same year. It reminded us of the “Tower of Babel” we saw in Helsinki

Each gallery has a specific genre, such as painting, architecture, or photography (to name a few), we both enjoyed the design gallery exhibition entitled “Objectology” which explored the appreciation of everyday objects as art. 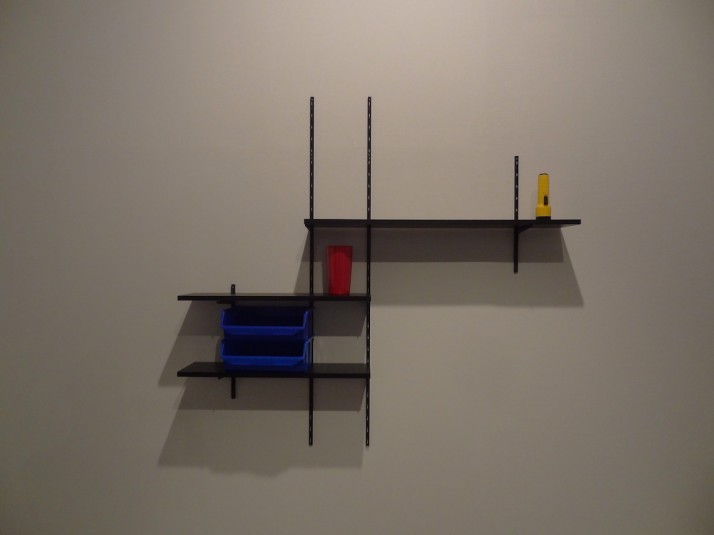 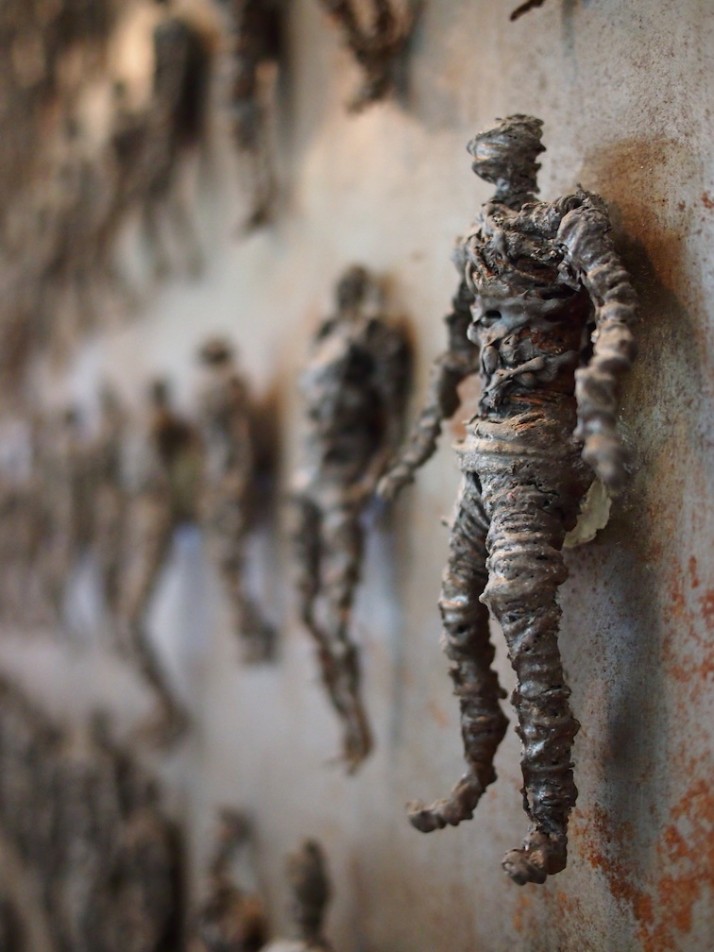 “Visual Point-Opener” by Kwon Dal-Gool, one of the many works in the sculpture garden 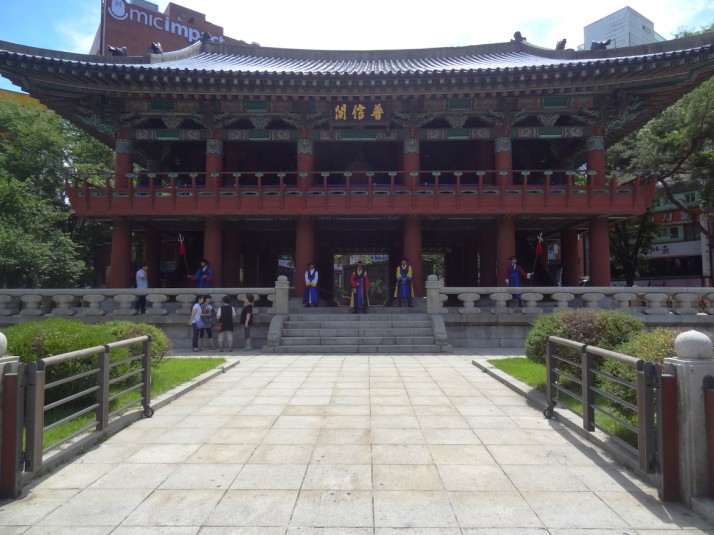 After our kimchi making class, we wandered through the centre of Seoul towards the Bosingak Bell Tower, and arrived to find a small queue near the steps and 3 guards at the entrance. As we approached the tower, the more flamboyantly dressed head guard turned to us and said “10 minutes” – we checked the time – it was 11:40.

We stood in the shade of the tower and a few minutes later the guards beckoned all of us inside and up the stairs to the second level – we followed the other group, feeling like we’d sneaked our way in. On the second floor we were treated to a bi-lingual explanation of the bell’s history before witnessing at arm’s length the mid-day bell ringing ceremony. Our timing could not have been better! 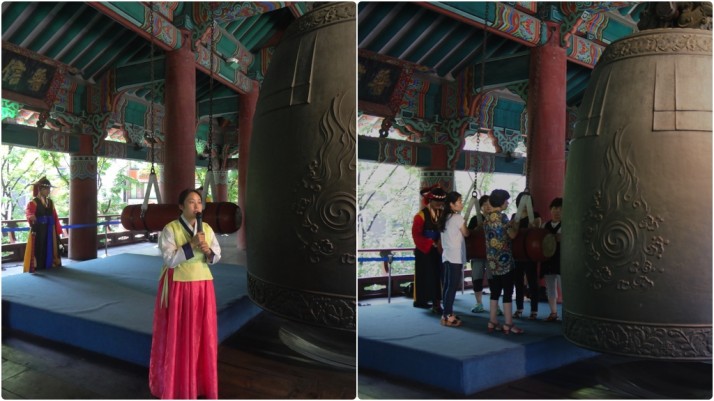 Introduction of the bell and the tower’s history, followed by 12 loud dings of the massive bell

For our last day in Seoul, we’d thought about finding a street food tour like the one we really enjoyed in Hanoi, but when we looked at the menus of 12 or so Korean specialties, there were only 2 or 3 things we hadn’t yet tried, so armed with a short list and a pair of hungry bellies we headed to the Gwangjang Market – home to rows of street food stands! 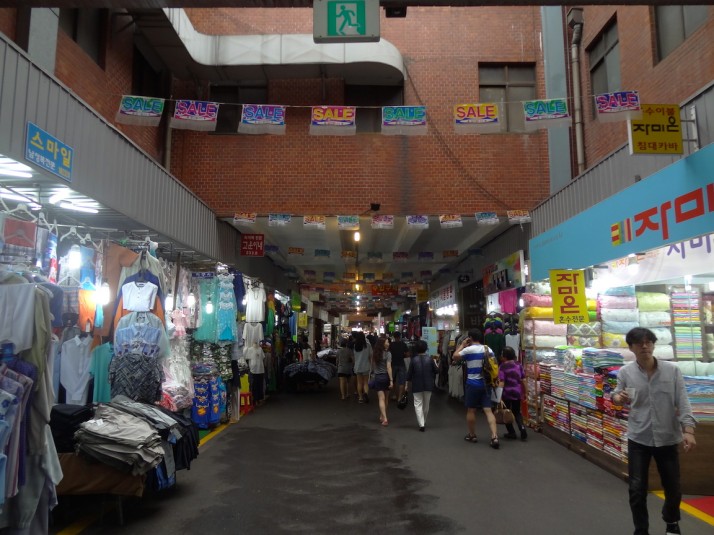 The main entrance to Gwangjang Market. It starts out with clothes, souvenirs, toys and herbs, but quickly gets going into food

The market is mostly small, independent clothing and shoe shops, except that the main east-west and north-south thoroughfares are given over to stand after stand of interesting, mouth-watering and occasionally stomach-turning delicacies! 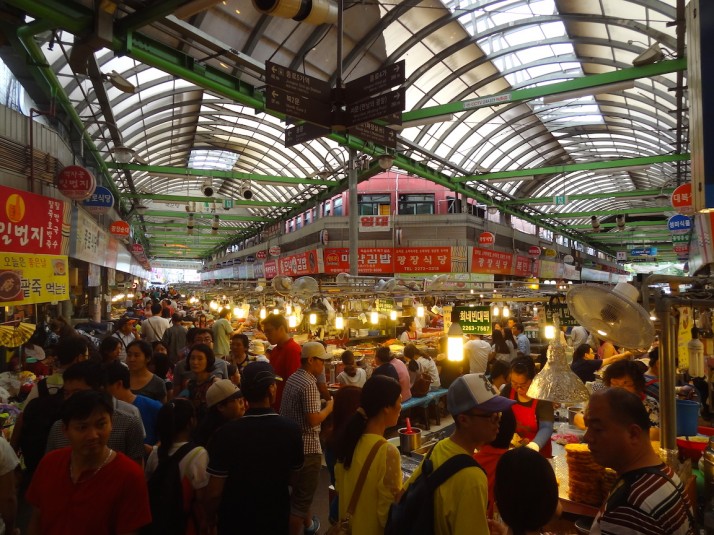 Most of the clothes shops were closed as we visited on a Sunday, but most of the food stalls and mini restaurants were open and there was plenty of business!

Julie spotted the shallow-fried mung bean pancakes straightaway, but we walked the length and breadth to see if we could find everything on our list. First, we sat down to a plate of kimchi dumplings.. 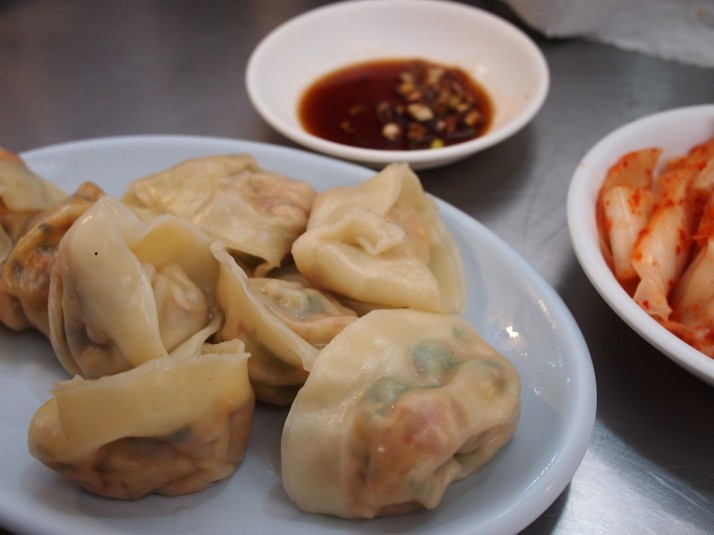 Is there no end to the uses of kimchi as a food ingredient? I’ll wager it’d do a grand job of your brassware too

Next up was the mung bean pancakes from one of the many mini factory-stalls turning the plain-looking beans into tasty, probably-not-so-healthy fried pancakes in front of our eyes 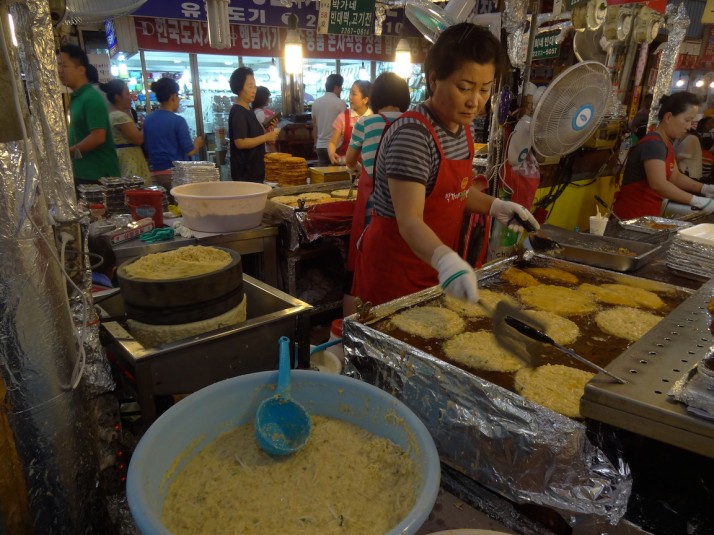 The finished product, a mung bean, cabbage and shallot pancake. They come with all sorts of additional ingredients, including, yes, you guessed it, kimchi

Footnote: Not so much a sight, but something I want to remember about Seoul.. the subway screens play curated clips from Vimeo and Youtube in between public service announcements, and a series of short animations featuring two larvae caught our attention. It turns out they’re by a Korean animation studio, and I found the humour to be just my cup of tea.. here’s one of my favourites, and there’s a lot more on this Youtube channel if you like it too.. enjoy!