Mount Fuji is the highest mountain in Japan, its near-perfect conical shape is iconic the world over, and its image can be seen in art, jewellery, clothing, sweets, cakes, posters and even toilet paper. 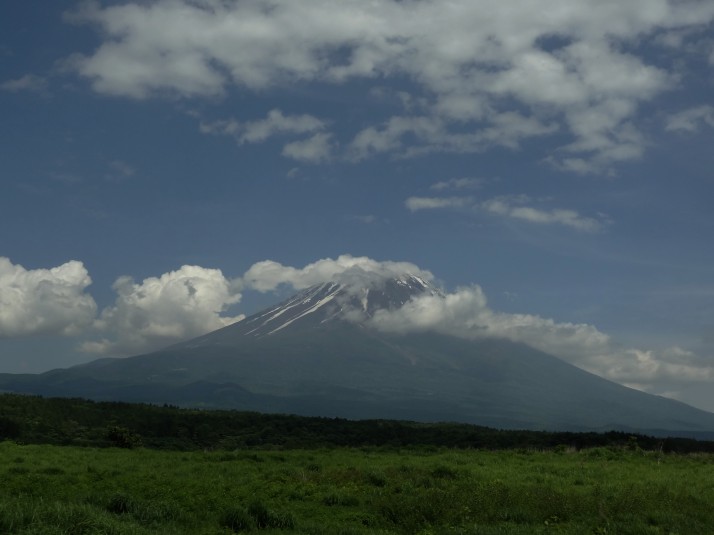 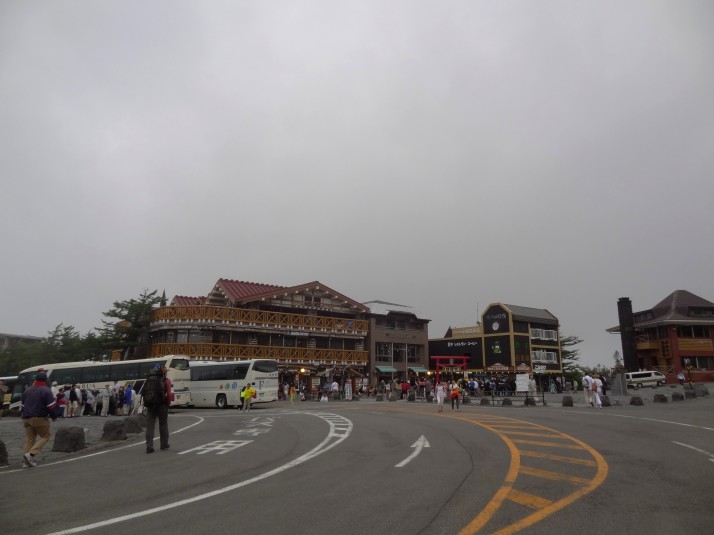 2305m: The starting point of the popular Yoshida Trail – Yoshida-guchi 5th Station (of 10). We weren’t expecting it to be so busy with day-trippers who had arrived by coach to shop and eat ice-cream! 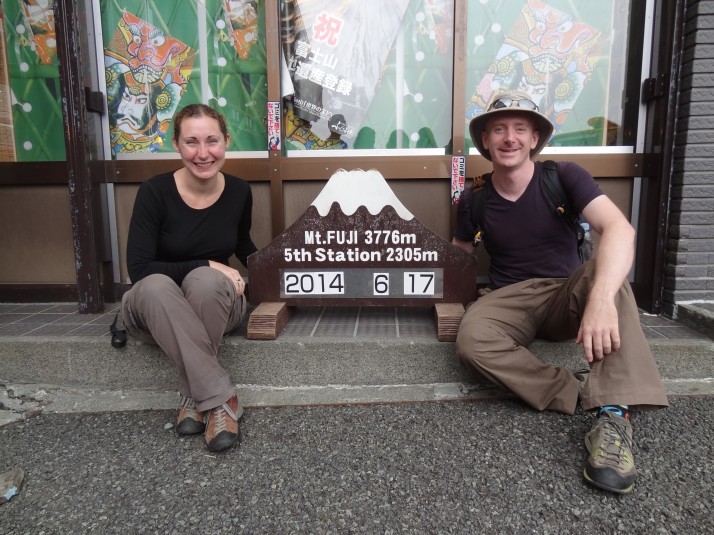 2305m: Us at the 5th Station, we joined in with the day-trippers and had our photo taken, but we didn’t stop for ice-cream, we’ve got a mountain to climb! 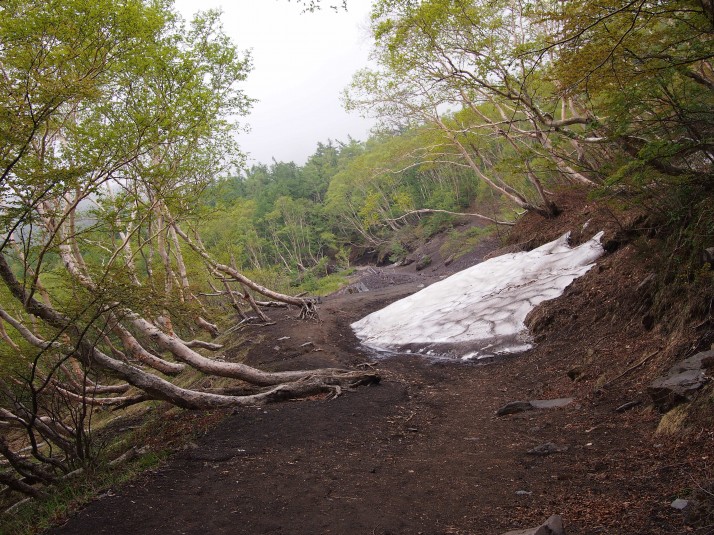 2305m: The Yoshida Trail really starts just around the corner from the souvenir shops. Less than 5 minutes in we find that there’s still snow on the ground at the end of June and hardly another person in sight 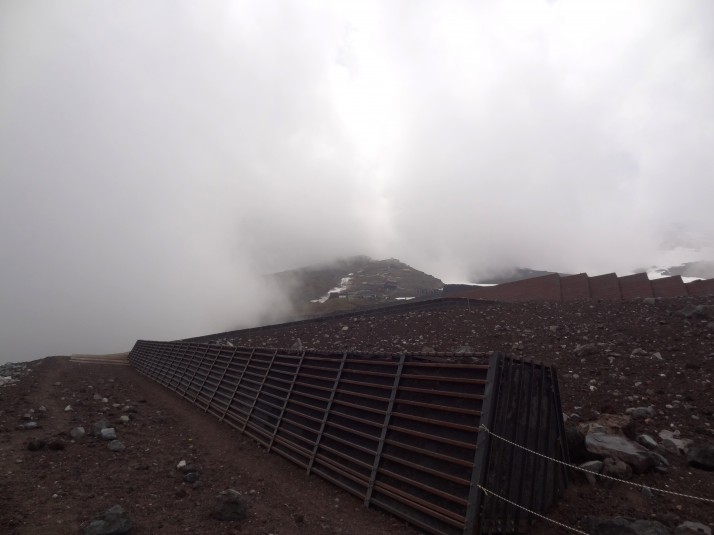 2390m: Just past Station 6 the ascent begins up the gravelly alien landscape of volcanic Mount Fuji. These large barriers are to prevent and protect against landslides 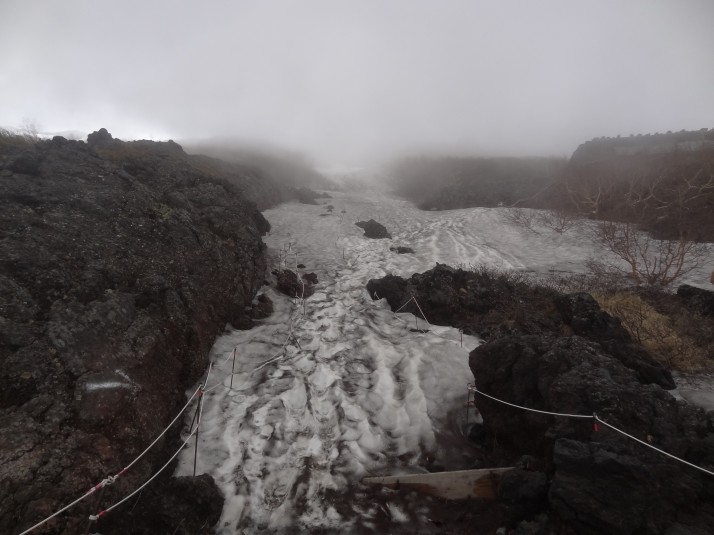 2672m: Snow blocks the trail just before the 7th Station. We’re still two weeks from the start of the official hiking season when the trails are cleared and the first-aid huts are manned 2673m: Undeterred, we carefully make our way through the snow by kicking in footholds 2700m: Stopped for lunch at one of the many huts on the Yoshida Trail. They’ll all be open in a couple of weeks time but for now they’ll do as wind-breaks! 2820m: We decided to stop at the torii we spotted off in the distance, can you see it? 2850m: Us at Torii-no, which is roughly half-way between Stations 7 and 8. It’s as far as we can go this time otherwise we’ll miss our bus home! 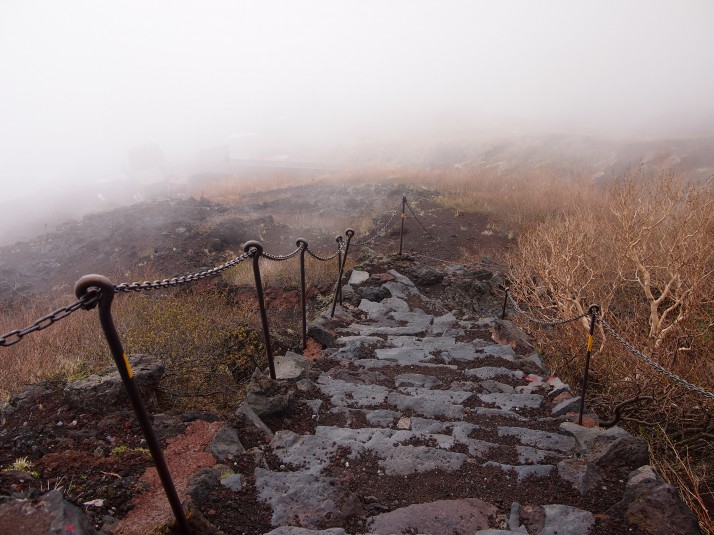 2850m: This is the view as we start our descent, that cloud can roll in quickly! 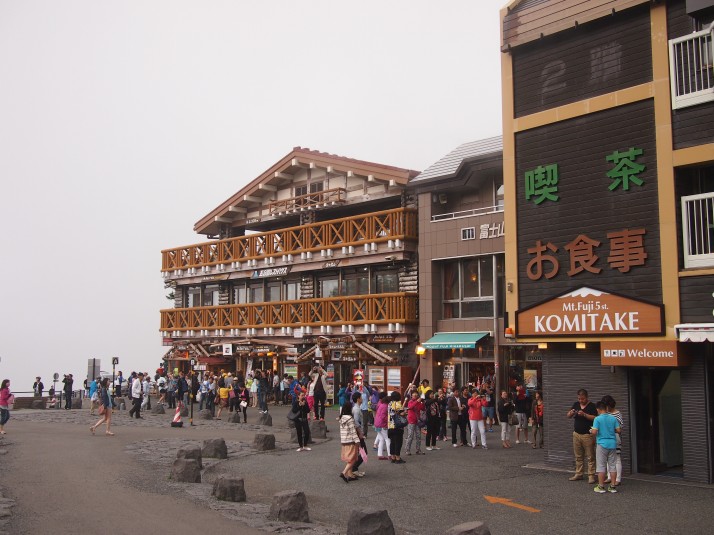 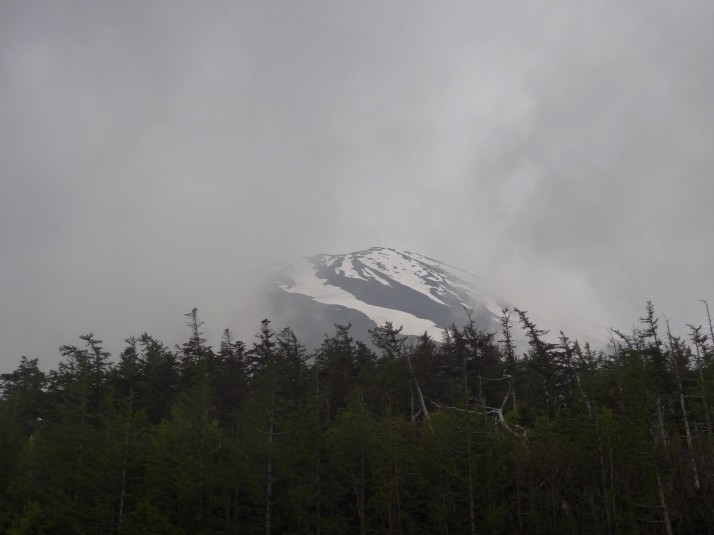 2305m: As we were about to get on the bus, Mount Fuji-san appeared in a break of cloud to say farewell. We’ll be back and next time we’ll make it to the top! We rested our tired feet and filled our bellies with the local Fuji delicacy of Hōtō – vegetable stew with noodles (and beef in this case), yum!

Cycling around 4 of the Fuji 5 lakes

There are 5 lakes to the north of Mt Fuji, and as our guesthouse offered free bicycle rental, we decided to see if we could visit them all, except Lake Yamanakako because it’s a bit too far away. 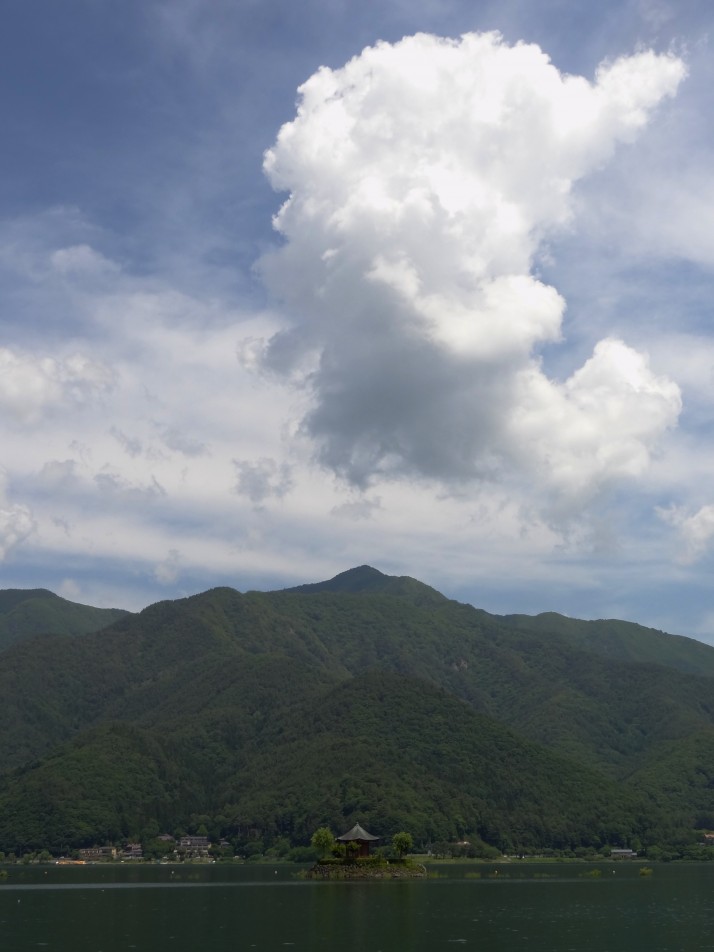 We started at Lake Kawaguchiko, the largest of the 5 and the most commercially developed. We saw a waterskier, lots of little row-boats for hire along the southern bank and two small islands at the western-end 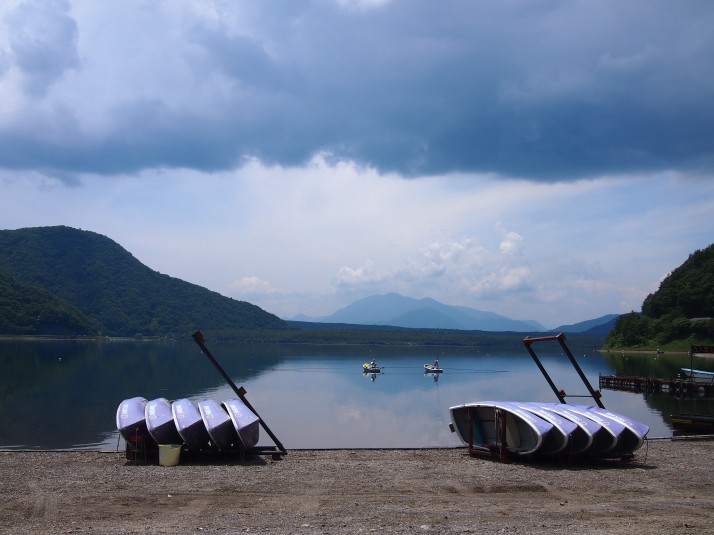 Cycling around the lakes seemed like a good idea – there are paths or roads around them, and these kinds of roads are usually pretty flat. However, we hadn’t considered the connecting roads given that this is a pretty mountainous region. All this to say that the road joining Lake Kawaguchiko to Lake Saiko was steep. After a long climb and a short tunnel the road descended to the next lake, but all we could think about was having to do it all again in reverse! Compared to Lake Kawaguchiko, Lake Saiko looks like it is set up for quiet fishing, and surrounded by steep hills it felt very tranquil Lake Shojiko is the smallest of the Fuji Five Lakes, and also looks set up for quiet fishing. It seemed to be very popular with the locals as it’s further from the beaten track We took a break from the saddle and walked up a short hiking trail to Mt Shiroyama for a spot of lunch. The view of Mt Fuji would have been great except for the clouds… The westernmost Lake Motosuko looks to be the most water sports-friendly. There were windsurfers out when we got there, and there were plenty of campsites, hotels and picnic areas just a stone’s throw from the shoreline. The main reason we wanted to visit this lake is because of the famous view of Mt Fuji that can be seen on the lowest denomination bank note – ¥1,000 – is from Lake Motosuko As we reached the viewpoint, the clouds cleared a little and Mt Fuji appeared once more to remind us it’ll still be here when we return to Japan.