In 301 AD Armenia was the first nation to adopt Christianity as the state religion, and today 3 sites covering 5 places of worship are recognised by UNESCO’s World Heritage List. While planning our trip we felt like almost every other thing we read was church this or monastery that – we were worried that we might quickly tire of them, that they’d all start blurring into each other and we would fail to appreciate their differences and significance.

I’m glad to say that wasn’t the case! So the story goes, Geghard Monastery was founded by Gregory the Illuminator in the 4th century at the site of a cave with a natural spring. Geghard is a common and easy day trip from the capital Yerevan, and as well as being an impressive sight in a spectacular location, it’s important because Gregory is credited with the country’s Christianisation. 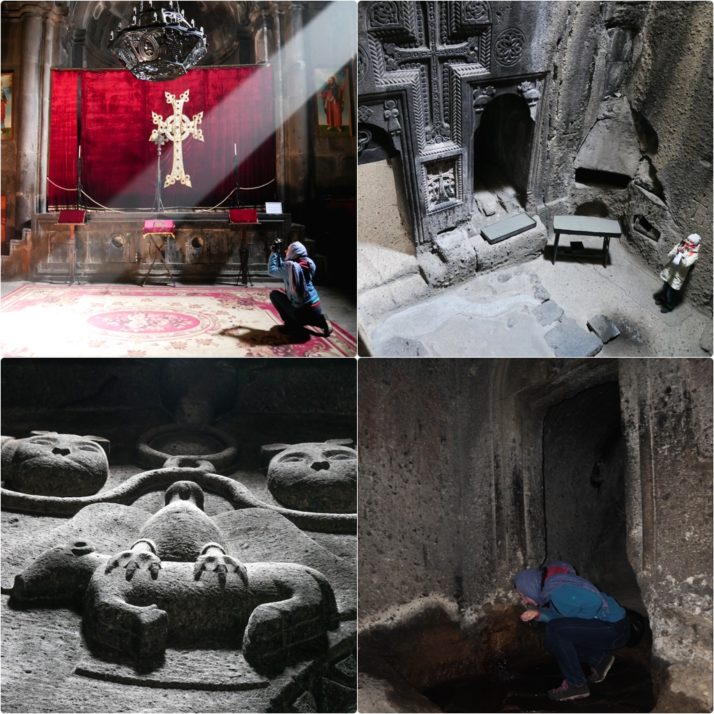 Clockwise from top-left: Julie photographing the chandelier in the main chapel; Zhamatun, the second of the cave chapels, viewed from a hole in the floor of the Upper Jhamatun; Julie tasting the spring water – very clean in taste (no sulphur or mineral aftertaste) but very cold!; Carved relief of a ram’s head, two lions and an eagle clutching a lamb which is believed to be the coat of arms of the family that had the cave monastery extended in the 13th century

At the beginning of March we pretty much had the place to ourselves, but out of the sunshine exploring the chapels and caves was pretty cold. Completely worth it though, as the carvings throughout the monastery are so detailed, particularly the most recent ones. We especially liked the boldness of the older carvings in the caves and the finer work in the corridor to the upper gavit.

The Temple of Garni The Temple of Garni, the only remaining structure of pre-Christian Armenia

A visit to The Temple of Garni is usually combined with Geghard Monastery as it’s pretty much on the way. Our day trip also included a stop at the modern Charents’ Arch but unfortunately the morning’s haze hadn’t quite cleared enough for us to see it framing Mt Ararat.

The Temple of Garni isn’t on the UNESCO Heritage list, but it is believed to have been built in the 1st century AD so it’s nearly 2,000 years old! We loved the detail of the stone carvings around the roofline, and the very big steps at the front to get to the altar inside. 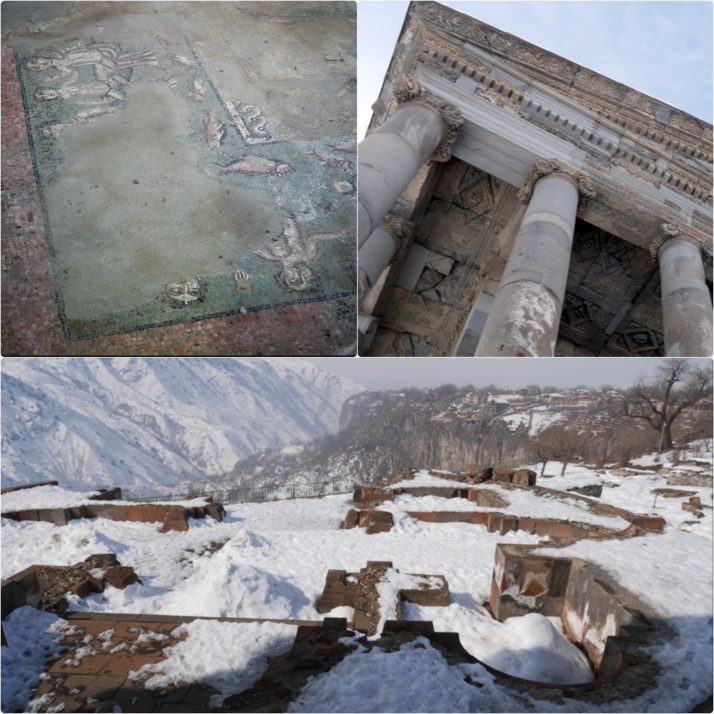 Clockwise from top left: The remains of the mosaic floor in the Roman bath house; Detail of the temple roofline carvings; the remains of the St Sion Church with a view down the Garni valley

The remains of St Sion Church sit adjacent to the temple but we could only just see them peeking out from the snow, however we were able to see through the door of a building nearby which houses the mosaic flooring remains of a Roman bath house – nowhere near as well preserved or extensive as those at the Villa Romana del Casale in Sicily – but fascinating to see such a breadth of history in one place. 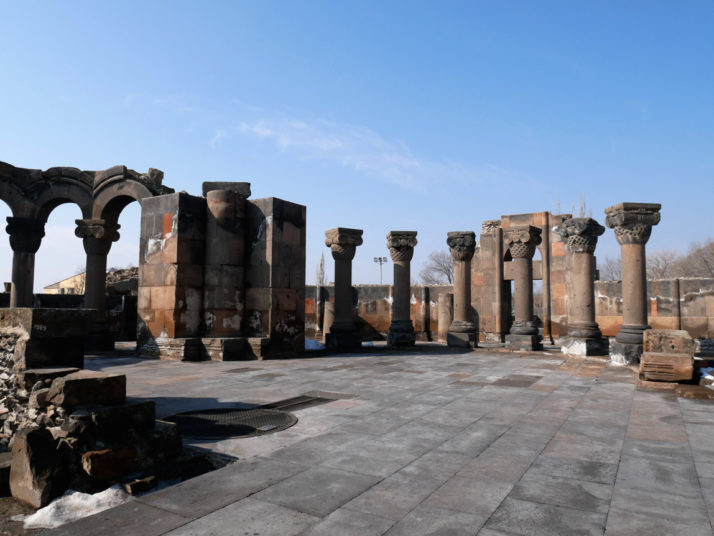 The ruins of the 7th century Zvartnots Cathedral

The ruins of Zvartnots Cathderal and the Mother See of Holy Echmiadzin are the second UNESCO site that we visited in Armenia on another day trip from Yerevan. According to the small museum on site, Zvartnots Cathedral was briefly the centre of Christianity in Armenia, and its unique design was inspirational for the restoration of the much larger dome of Haghia Sophia in Constantinople, now Istanbul. The remnants of Zvartnots Cathedral, clockwise from top-left: a pair of carved eagle capitals; a model of what Zvartnots may have looked like; and the many pieces of it which lay around in the surrounding fields like a massive jigsaw puzzle

According to the information pages on the excellent Armenia Heritage website, the surrounding buildings were a palace used by the Catholicos of All Armenia (i.e. the head of the Armenian Church) and included a throne room, a Roman bath house and a large winery. Palatial indeed! We really enjoyed exploring the ruins and trying to imagine how impressive the cathedral and its surrounding buildings would have been. Echmiadzin Cathedral. There’s always something being repaired when we visit the sights of a country!

Echmiadzin (officially Vagharshapat) is the 4th largest city in Armenia having once been the capital, but the reason for our visit was the Mother See of Holy Echmiadzin – the centre of Christianity in the country – and specifically the Mother Cathedral of Holy Echmiadzin, the oldest cathedral in the world. Inside it felt open and airy despite its relatively small size, and easily accommodated the many worshippers and handful of tourists. We liked the restrained frescoes and the 3 rooms of the treasury museum behind the main altar that includes among its relics the right-hand of St John the Baptist and the Holy Lance, said to have pierced the side of Christ. 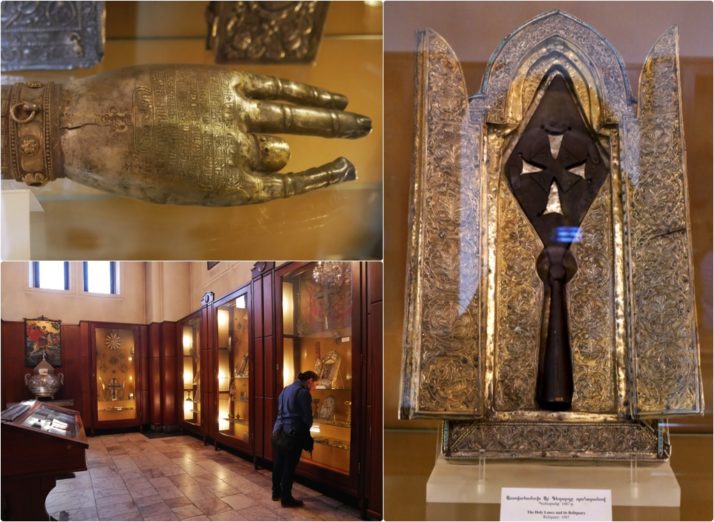 Clockwise from top-left: Reliquary of St John the Baptist; The Holy Lance and its reliquary; Julie in the first room of the Cathedral Museum

As well as the cathedral, the Mother See, like the Vatican, comprises a number of other buildings including a seminary, and there are some very modern additions like the Gate of St Gregory and my favourite, the circular Church of the Holy Archangels. 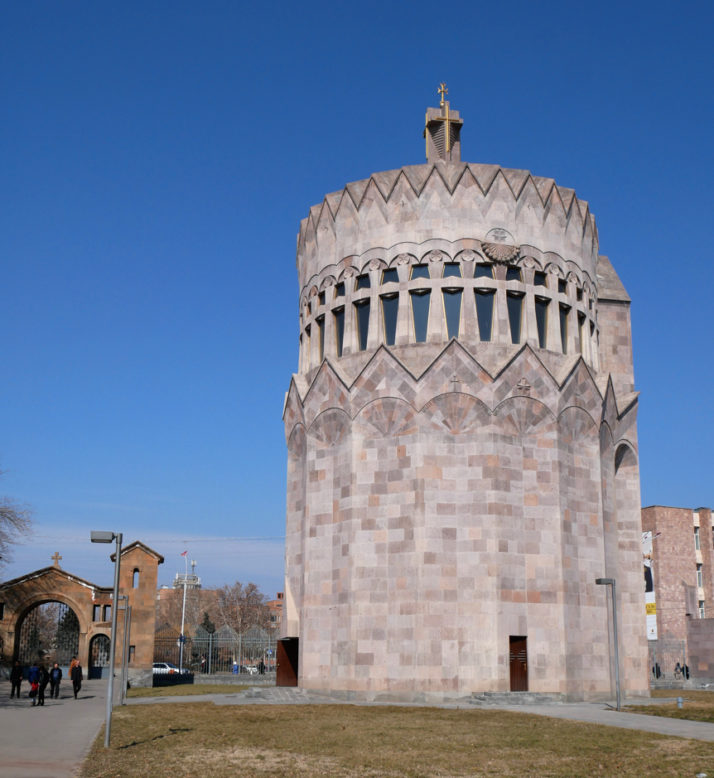 As well as the cathedral and its treasury museum, we liked the new Gate of St Gregory and the funky tall circular Church of the Holy Archangels. 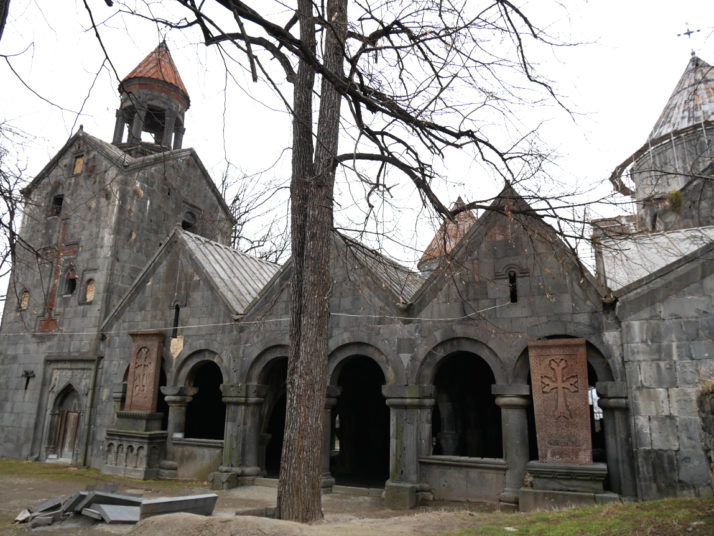 Sanahin Monastery, tucked away on the fringes of the village

Near the end of our fortnight in Armenia we stayed in the small northern mining town of Alaverdi, an excellent base from which to visit Armenia’s final UNESCO site – the monasteries of Haghpat and Sanahin.

While it is possible to visit both in a day, or even half a day by taxi, we split them up so we’d have plenty of time to explore. Sanahin is the closer of the two to Alaverdi, though they’re both a short but very steep 1st gear marshrutka ride from the bottom of the Debed Canyon to their respective villages and they’re very different. 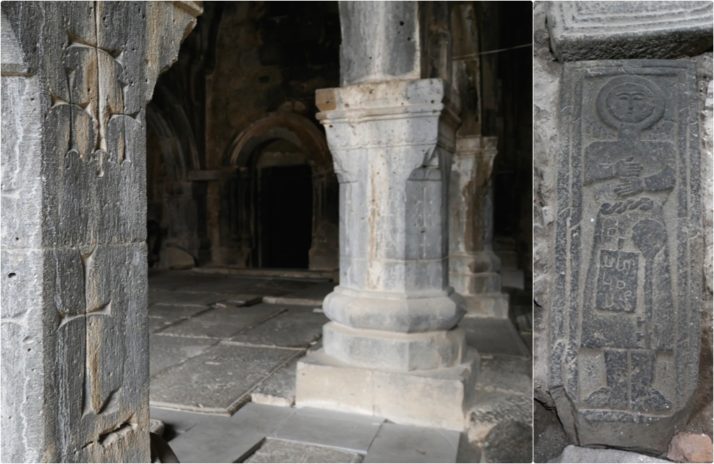 Details of Sanahin Monastery: the carved pillars and walls of the main gavit which we saw at all of the churches and monasteries in Armenia; One of the carved gravestones depicting the profession of the deceased, we think he was a musician

Sanahin looks compact, squeezed into a forest clearing between the edge of the village and the foot of the hills but it feels big, especially in the main covered entranceway or gavit, the floor covered in the gravestones of royalty and those once important in society, often depicting the interred’s profession. However, our favourites were the huge square bell tower with red brick crosses incorporated into its walls, and the fine examples of two khachkars (literally “cross-stones”) standing to attention that flank the main entrance. 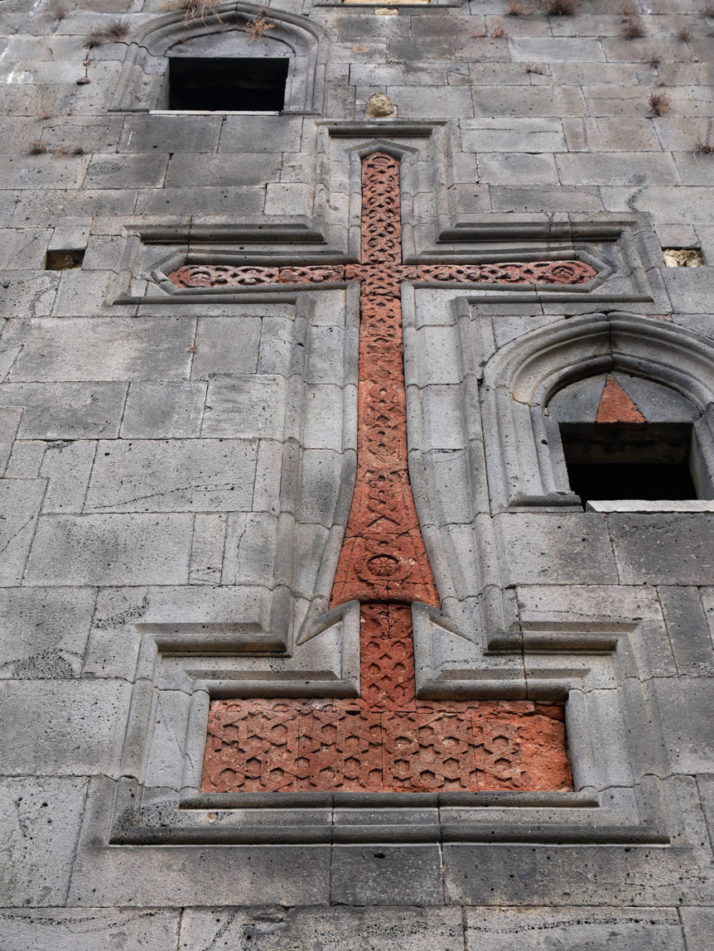 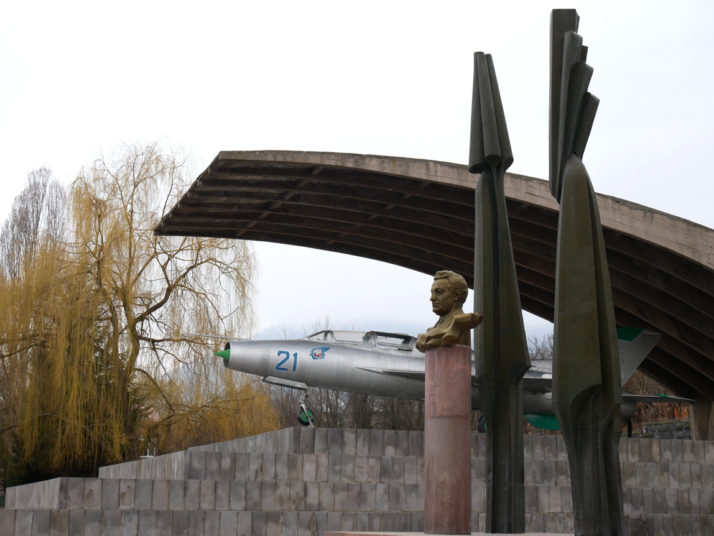 Just down the hill from Sanahin Monastery is the museum of the Mikoyan brothers. One worked for 60 years in the Soviet Politburo and the other designed the USSR’s first jet fighter, the MiG 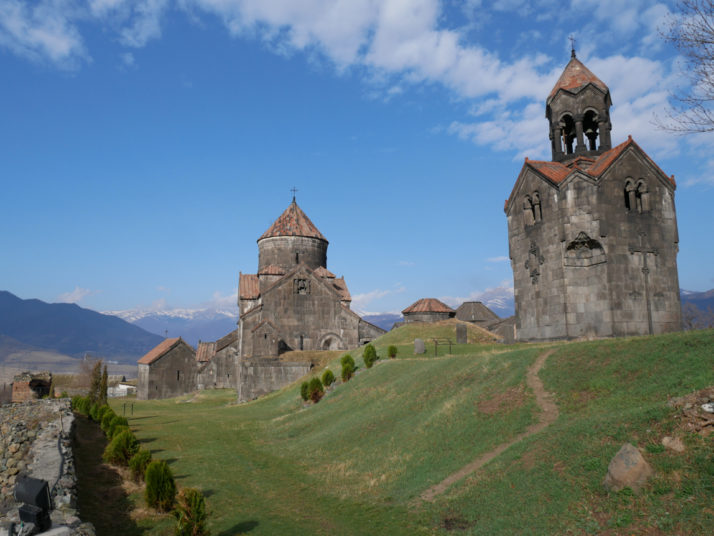 In contrast to Sanahin, Haghpat Monastery sits on a lofty perch overlooking the village and the canyon. When we arrived we thought it was closed as all of the gates were shut, but after wandering around the perimeter of the old walls a local farmer gestured through so we crept in and started exploring. 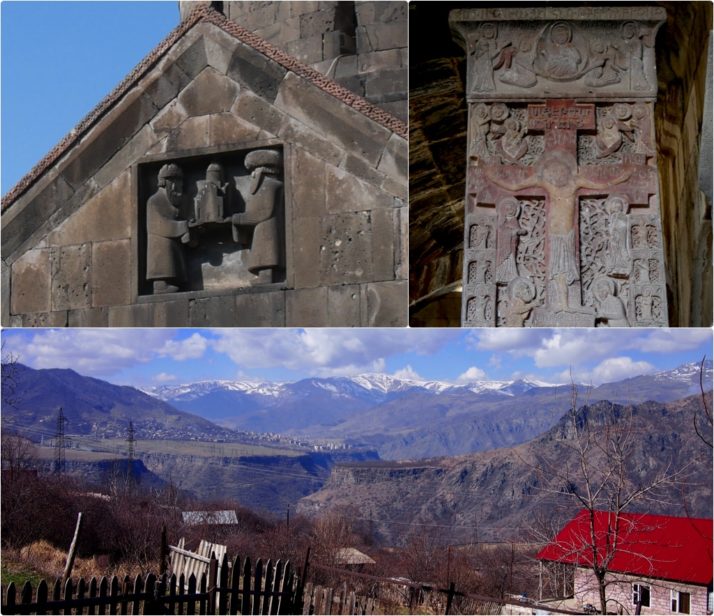 Clockwise from top left: detail of the carving of the monastery’s founder’s sons Smbat (who later became a king) and Gurgen holding a model of the church; the Amenaprkitch (All Savior) Khachkar of 1273 is the only one we saw in Armenia with a painting on it; and the view of the valley canyon with Sanahin just visible on the left ridge

As we worked our way around a youngish guy with a big bunch of keys started opening up the buildings and encouraging us to enter. A Polish couple arrived and he seemed more comfortable talking to them in Russian – we followed them all to the bell tower but unfortunately there was only time for the other couple to climb the tower as the caretaker had to lock up. Still, we’re glad we got to see inside the locked churches! 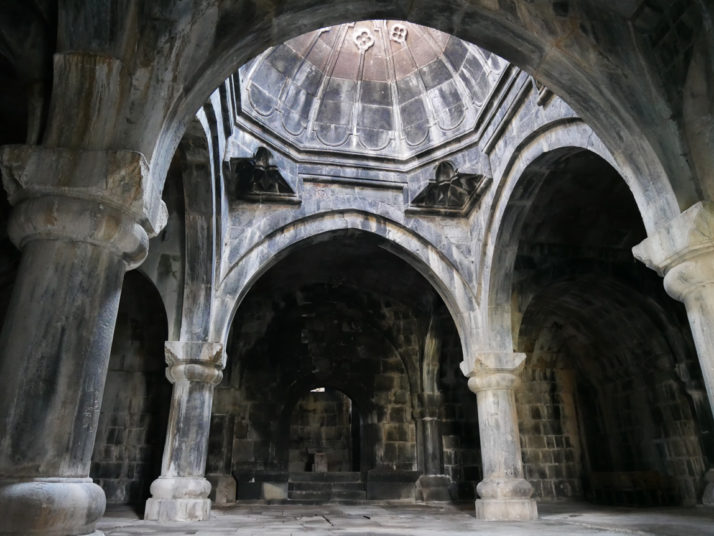 As well as the separate bell tower (very different to the one at Sanahin), we liked the vastness of the ancillary buildings – one, the Hamazasp Gavit used as a monks assembly room is the largest gavit in Armenia, and we especially liked the depiction of the two brothers holding a model of the church. 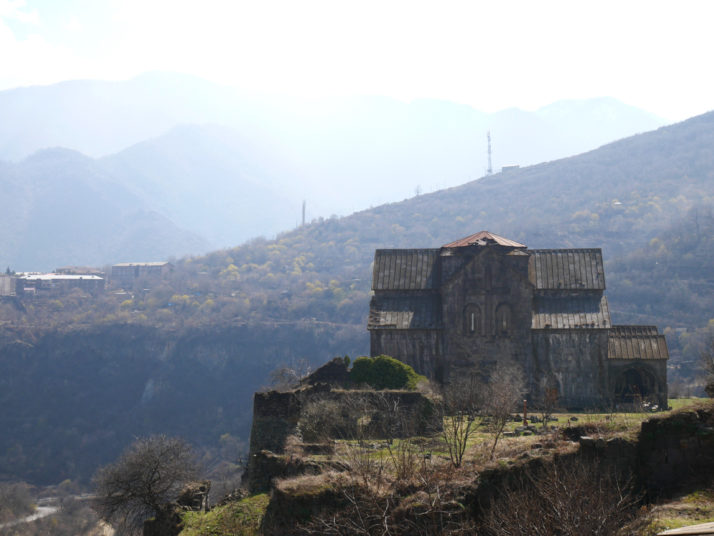 Akhtala hill-top church. Stunning location and not much to look at from the outside, but inside..

After our visit to Haghpat we decided not to wait 1½ hours for the next marshrutka and opted to set off on foot hoping to hitchhike a little further away from Alaverdi to the small village of Akhtala. A transit van, an old Vauxhall Cavalier with a cheery pair of Georgians (one of whom looked like George Clooney!) and a lovely couple in old Lada making a bread delivery later and we were there, the non-UNESCO St. Astvatsatsin church in the Akhtala complex.

We stood at the gates for a minute or so taking in the views (and taking photos, obviously!) when an old gentleman rattling some keys walked past us and gestured to the church. Feeling a bit like we were being frog-marched, we followed and were led inside – Wow. 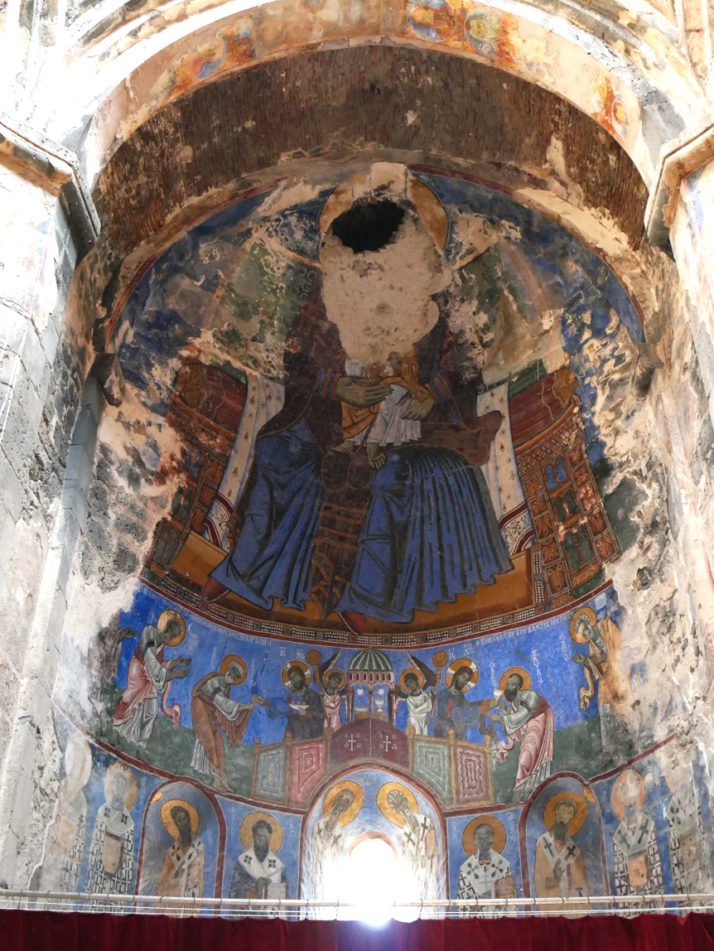 It’s an assault of vivid colour! Beautiful, detailed frescoes line the walls though some are in desperate need of a little restoration..

We spent as long as we dared gazing in awe at the colourful, detailed murals while the caretaker quietly stood out of the way occasionally checking his mobile phone. We could easily have spent an hour inside walking around and slowly checking out each of the walls. It looks like repairs have started on the roof so we made a donation and asked if it was OK to look around the grounds. 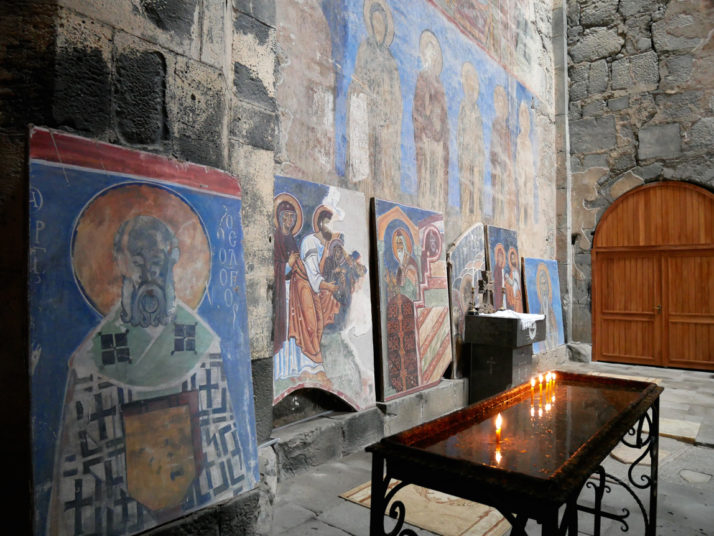 This prompted a short tour.. our caretaker was keen to point out the grave of the last monk to live here who died at the age of 100 in 1972, the old monastery cells in the walls, some kilns near the entrance and a modern sculpture that he was quite keen for us to step through which superstitiously helps your relationship but we both thought framed the monastery quite nicely.. 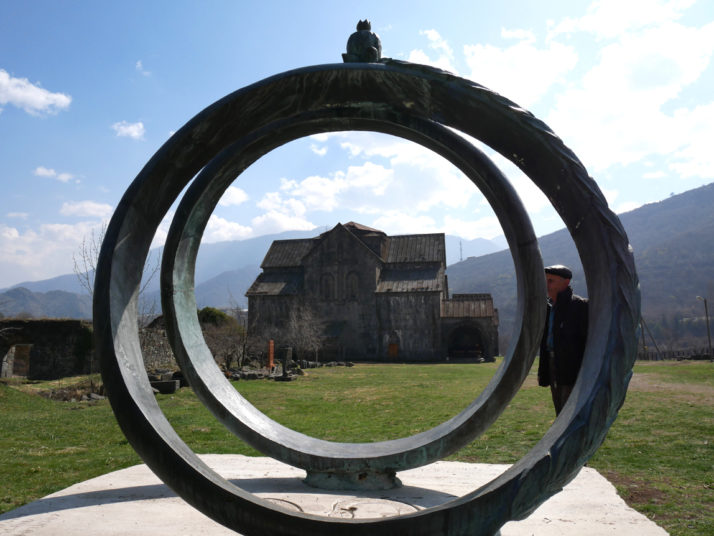 Modern sculpture at Akhtala – if only I could recall the Armenian for “Excuse me, sorry, would you mind taking a step backwards please?”

Feeling confident in our hitchhiking abilities, we set off from Akhtala towards the main road and after about 40 minutes and a few attempts we eventually managed to wave down a telecoms engineering van heading our way that had 4 guys in it and 2 spare seats. One of the young guys, Mikahl, graduated with a degree in English and we had a long and interesting conversation with him and his work mates. He also tagged us on Facebook as “English autostoppers” :o) 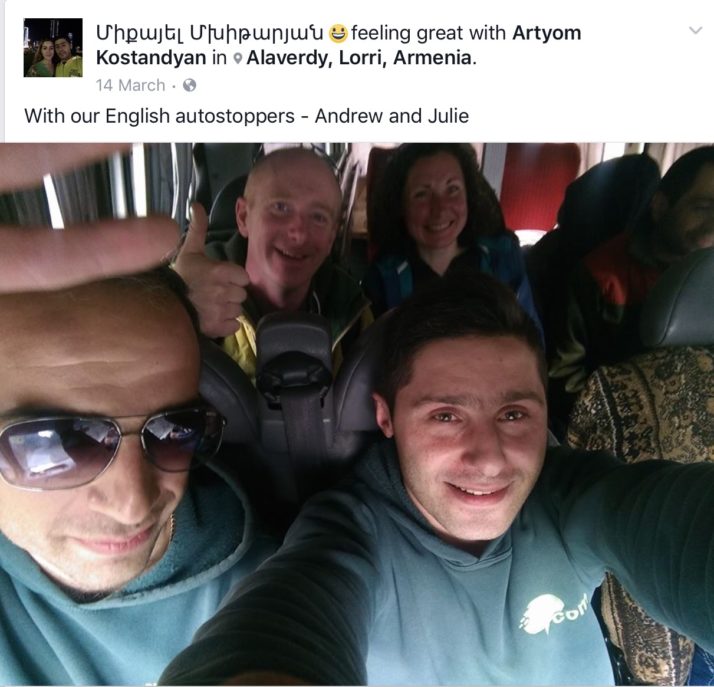 Mikahl tags us on Facebook on our way back to Alaverdi! Thanks again for the lift and the conversation :o)

The thing we’ll remember most that distinguishes Armenian churches and monasteries from any other places of worship we’ve seen so far are the carvings on the outside walls. They are covered in crosses of different sizes and styles, almost like graffiti, and we think they look really good!

3 thoughts on “UNESCO Churches and Monasteries of Armenia”