The most famous sport in Thailand is, of course, Muay Thai kickboxing. It’s not possible to sit in a bar on the eastern side of Chiang Mai and not be handed an A5 flyer for the thrice-weekly bouts at the Kalare kickboxing stadium, which is just off Chang Klan road, north of the Night Bazaar. 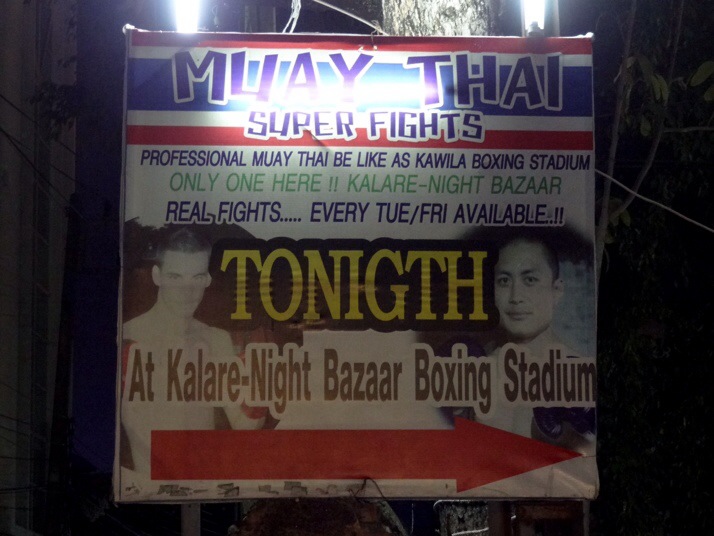 Wedged between a dusty gravel car park and the variety performance stage at the back of the Night Bazaar, the Kalare stadium looks like it just rolled into town that morning. ‘Makeshift’ would be an apt description. We bought our tickets out of a plastic tub on a small folding table while an enthusiastic recorded announcement played overhead voiced by an older-sounding Thai gentleman with an excellent grasp of showmanship English .. “Tonight! Proooooooo-fesional Thai Kickboxing!”

Now, allow me to interrupt the story for a second..

Neither of us are boxing fans, and while I did watch a lot of wrestling when it was popular back in the early 1990s, my most recent experience of watching this kind of sport was a few years ago where I saw Evander Holyfield in a boxing match on the TV in a sports bar in the United States. As the fight progressed and the fighters got more and more injured (broken noses, cut eyebrows, black eye’s etc), I started to feel a little queasy. While I still maintain it was the effects of the beer and not my softer sensibilities that was to blame, I was a little apprehensive about how I’d fare given that Muay Thai is more of a contact sport than Heavyweight boxing is, and that we’d be seeing it in person.

Anyway, back to the “Proooooooo-fesional Thai Kickboxing!”..

We took up a couple of seats on one of the ringside-length plain metal benches, and the place quickly filled up around us with equal-parts tourist, expat and local. The programme for Wednesday the 22nd of January 2014 listed 7 fights. 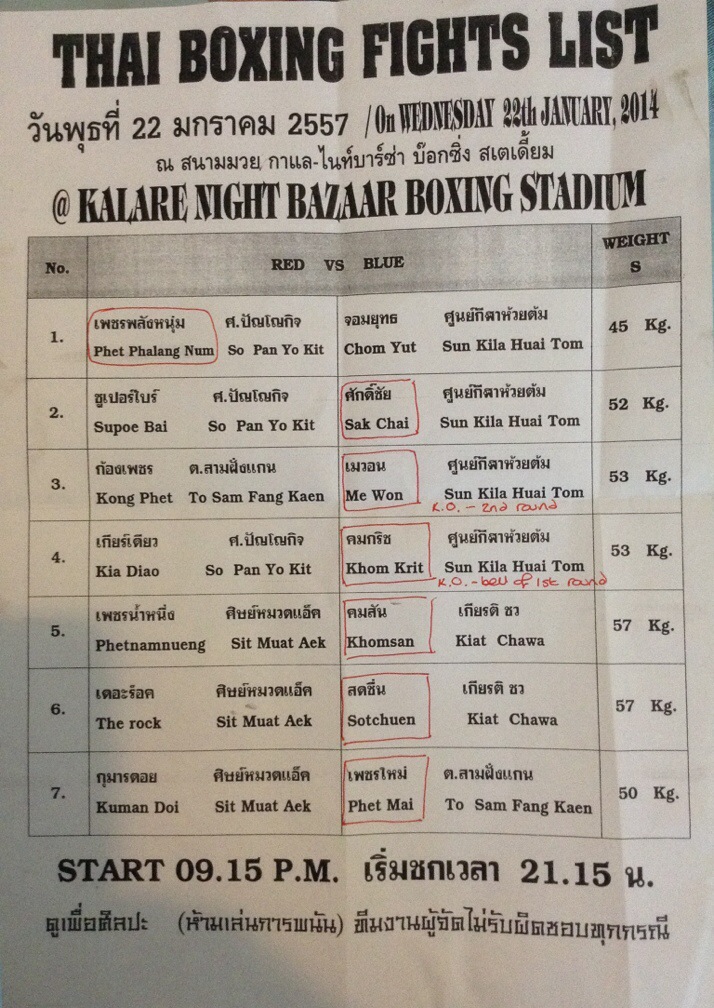 Then the fighters came out and, wow, they looked young.. 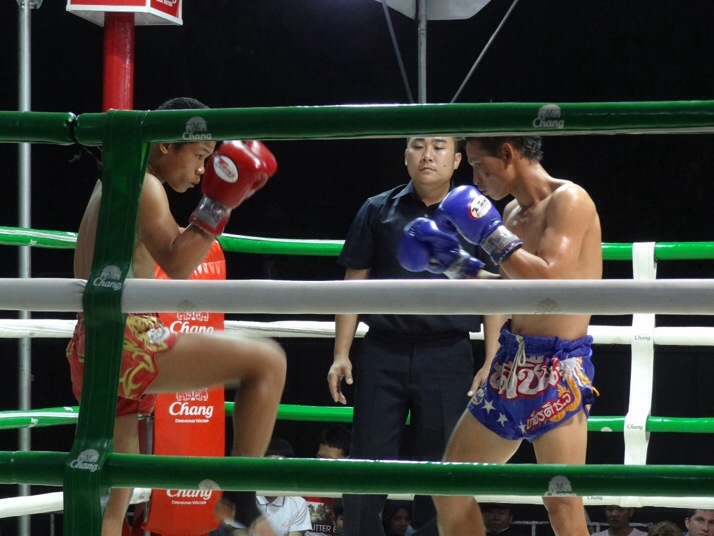 At times it was difficult to understand who had won each of the 5 rounds in a fight, but by the end our analysis of the match was in agreement with the judges’ verdict. 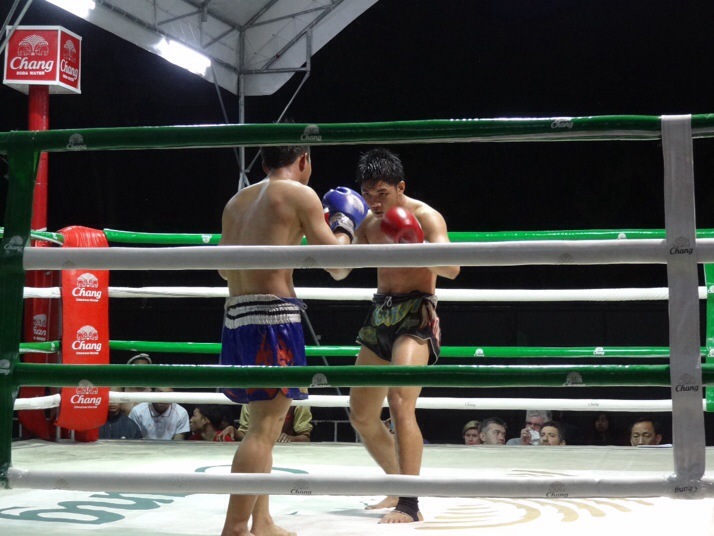 5th fight – Phetnamnueng (blue – winner) vs. Khomsan (red) sizing each other up in an early round 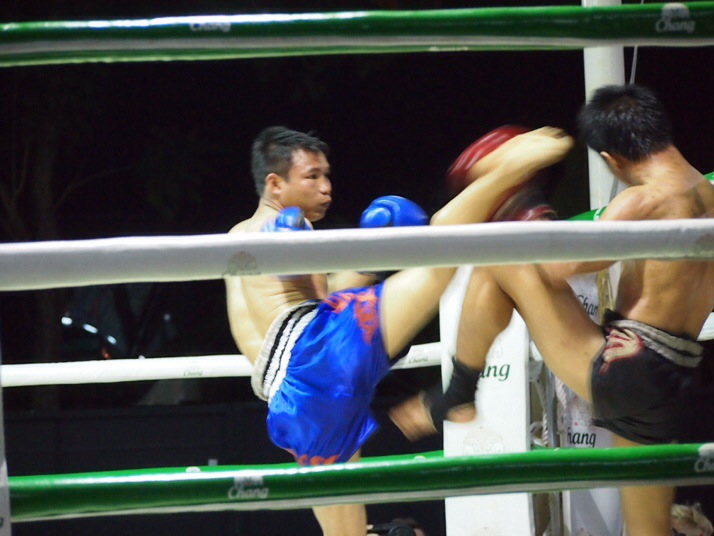 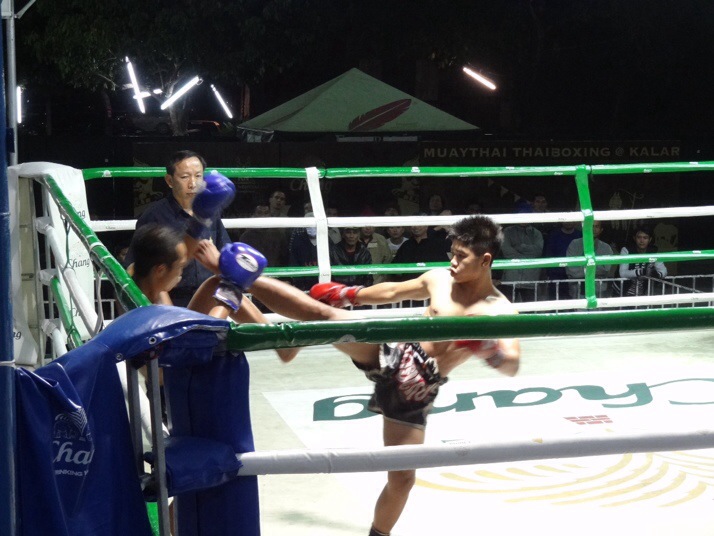 Helped by two KO’s (knockouts) – one from a kick to the head in the 2nd round, and another from a disabling kick to the upper arm at the end of the first round – everyone really started getting into the fighting, cheering on the good contact from kicks and punches, and otherwise looking engrossed. 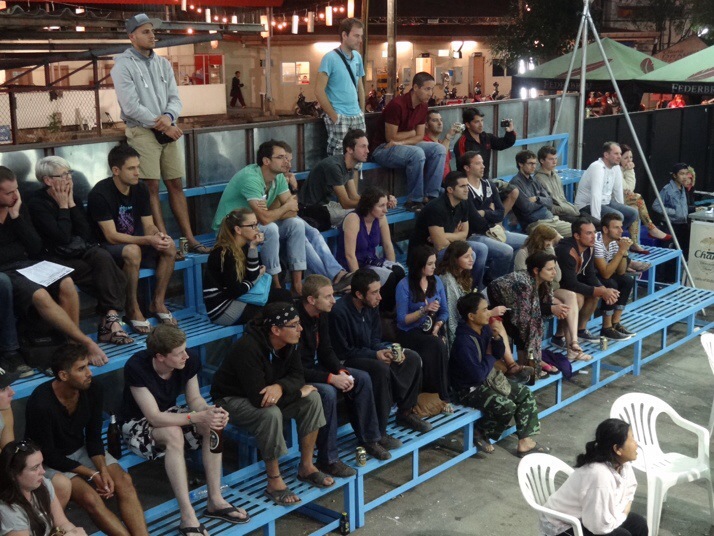 The crowd – utterly engrossed and on the edge of our seats

There certainly wasn’t anything makeshift about the fighting, and, somewhat despite our initial preconceptions, we enjoyed the evening more than we thought we would. Oh, and I didn’t once feel queasy. I was right, it was the beer.