Chengdu is the capital city of Sichuan Province, and made it into our itinerary for the sole reason that back home, my favourite Chinese take-away dish is Sichuan crispy shredded beef. 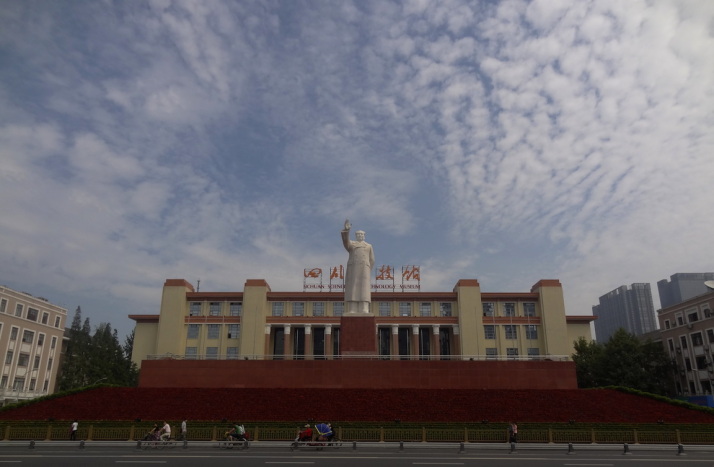 We arrived with two missions, upload the monumental amount of photographs we’d taken in the previous 3 days in Zhangjiajie, and more importantly seek out what is, to my mind, the second best dish in all of Chinese cuisine1.

Upon our arrival, we found that our hostel had a free walking tour of Chengdu and after a surreal detour to see a temporary exhibition of 102 Doraemon figures (why?) our tour took us through the central food court area where our guide stopped to recommend the shredded beef.. bingo! Sichuan shredded beef as presented in the UK, Mmmmmm ;o) 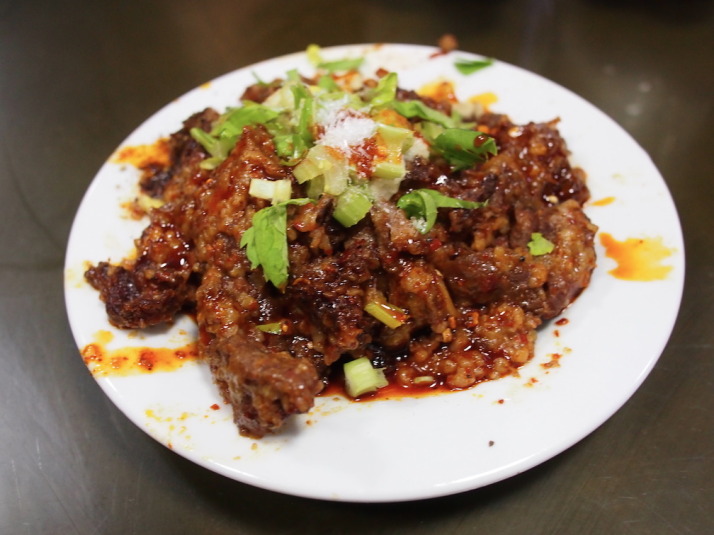 Sichuan shredded beef as presented in Sichuan. Very different, and oh, wait, my mouth is on fire!

Sichuan cuisine is well known for its spiciness. The region grows its own varieties of the key ingredients used in many of its signature dishes, but one thing we didn’t know before we tried it was that Sichuan pepper has a numbing effect on the mouth. Our guide said this is so you can eat more of the spicy-hot Sichuan chillies. And in case you needed help eating more, the dish is brazenly garnished with Monosodium Glutamate, or MSG. It’s sounding a little less tasty now, isn’t it?

After pushing most of the MSG to the side, I can report that the real thing is very spicy (almost rivalling the Korean pot noodles we had in Mongolia), and from the few mouthfuls I remember before I started perspiring and lost the sensation of taste it was excellent.

Upon reflection (and a bit of time to regain feeling), I think I enjoyed the authentic Sichuan shredded beef in Sichuan more. The dish at home is often covered in a gloopy, glutinous sauce, whereas the dish in Sichuan (after the removal of the MSG) feels lighter and, well, cleaner, if that’s not a strange thing to say given the aforementioned topping and the numbing sensation.

Thankfully, there are plenty of things to occupy our other working senses in Chengdu.. 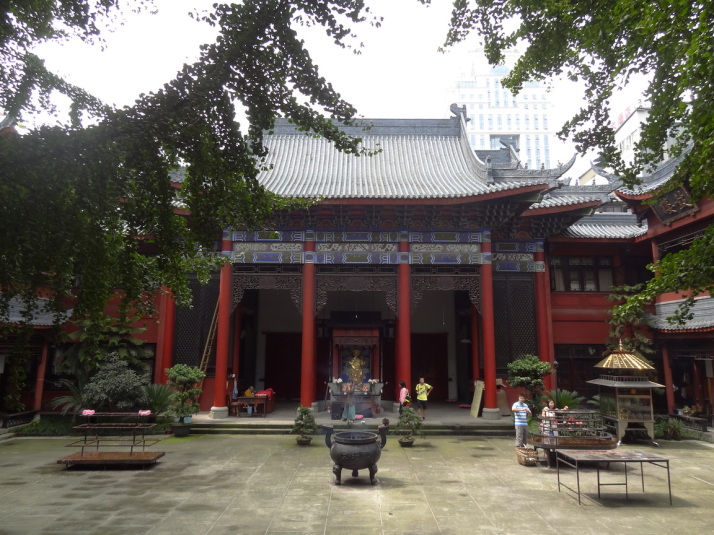 Having read that it was possible to eat with the nuns at the Aidao Nunnery, we headed there with time to spare before the 11:45 commencement. Not sure of where in the Nunnery it took place, or at exactly what time, we only knew for certain we were in the right place because of the amazing vegetarian smells coming from the kitchens around the back.

11:45 came and went, but just before 12:00 we saw a few people helping themselves to two bowls and a pair of chopsticks, so sheepishly we did the same and followed them into the large hall at the right of the complex. 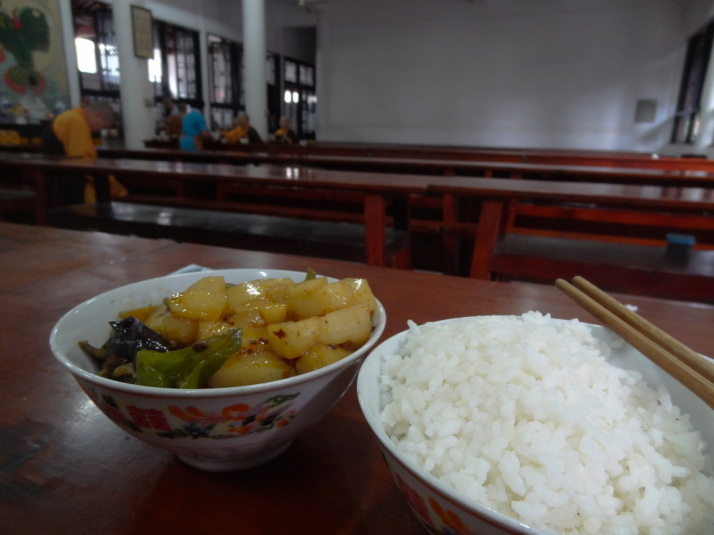 A budget banquet in a bowl! Our vegetarian lunch consisted of umpteen different and delicious dishes and a bowl of rice

After a short prayer (and a little guidance from one of the friendly servers), out came the food – vat after mouth-watering vat was presented and scooped into our bowls until they were almost overflowing.

The food was delicious, plentiful, some of it was spicy, and there were 2nds, 3rds and even 4ths on offer! Best of all, it cost an embarrassingly low ¥5 – that’s just 50p! 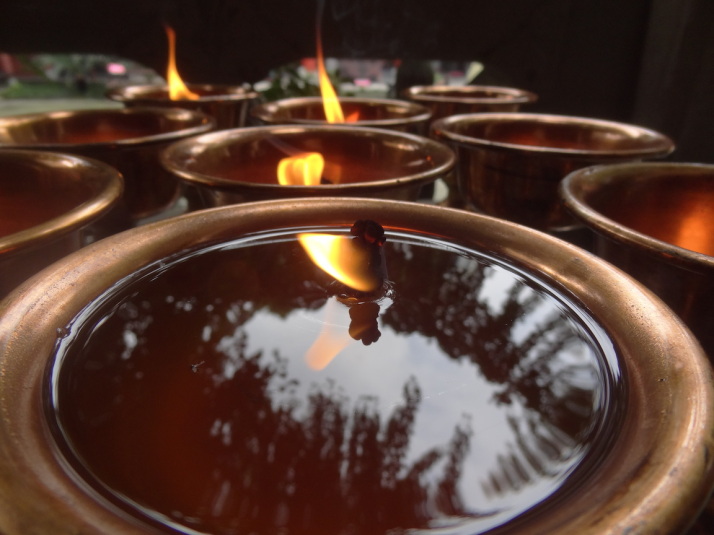 Afternoon tea in the People’s Park 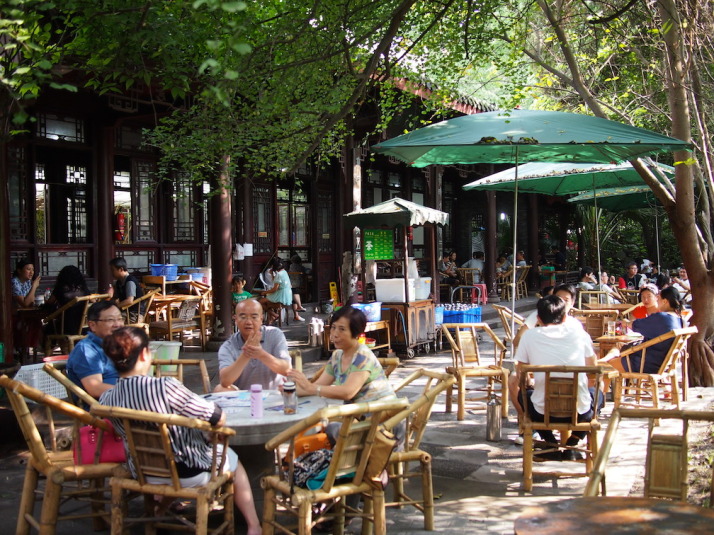 The Shao Cheng Tea House in The People’s Park, Chengdu. Of the 5 tea houses in the park, we chose at random and just happened to pick the cheapest one!

Allow me to preface this with a warning about tea ceremonies in China. There are a number of stories where foreign tourists are approached in the street by 2 Chinese students who, with excellent English, make small talk and then invite them to take part in a traditional tea ceremony. The tourists do indeed receive tea, but are locked into the building until they pay over £100 or more per cup (and we’ve heard stories that run into thousands of pounds or dollars).

There must still be money to be made in this scam as we were approached twice while in Shanghai, the second time the invitation was to the Shanghai International Tea Festival (which does exist, but had finished some 2 months prior). The approach was the same: “would you take our photo please? Thank you, where are you from? etc..” 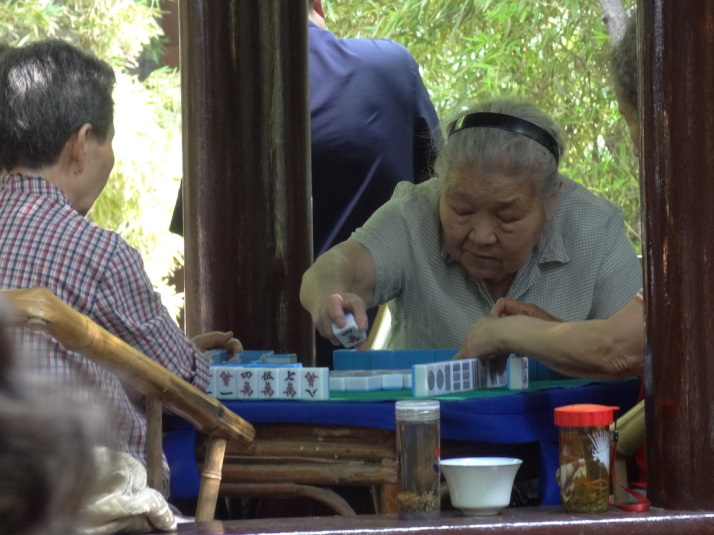 While tea ceremonies are for very special occasions, drinking tea is even more ingrained in the Chinese culture than the British. We have seen so many Chinese tourists wandering around with what look like water bottles full of tea leaves, and they routinely stop to top them up with hot water – indeed, the only drinking water flight-side that we saw in Beijing airport was from a boiler for just this purpose!

As if I need present more evidence, Chengdu’s People’s Park has 5 tea houses. We chose one at random, and were seated at a table next to a delightfully peaceful pond in an enclosed courtyard with only the sound of mahjong tiles and tea cups being placed on the large stone tables.

Julie and I waiting for our tea to arrive

We each chose a different teas from the small, worn, laminated card which thankfully was in English, and soon our tea sachets arrived together with two small cups and a single, large thermos-like canister full of hot water for us to top up our tea with. Julie’s jasmine tea. The price per cup includes a seemingly unlimited supply of hot water, and we agreed the 3rd or 4th cup was just about the right strength

We spent a very enjoyably relaxing 3 hours in the tea house, at which point the tea was just about the right strength. Had we not been seated next to the fascinating Jeff from California who teaches English to Chinese teachers (and reminded me a lot of my Dad – hi Dad!), the hours would have dragged as there’s only so much mahjong you can watch everyone else playing when there isn’t anyone to explain how it works!

Leshan Buddha – the biggest Buddha in the world 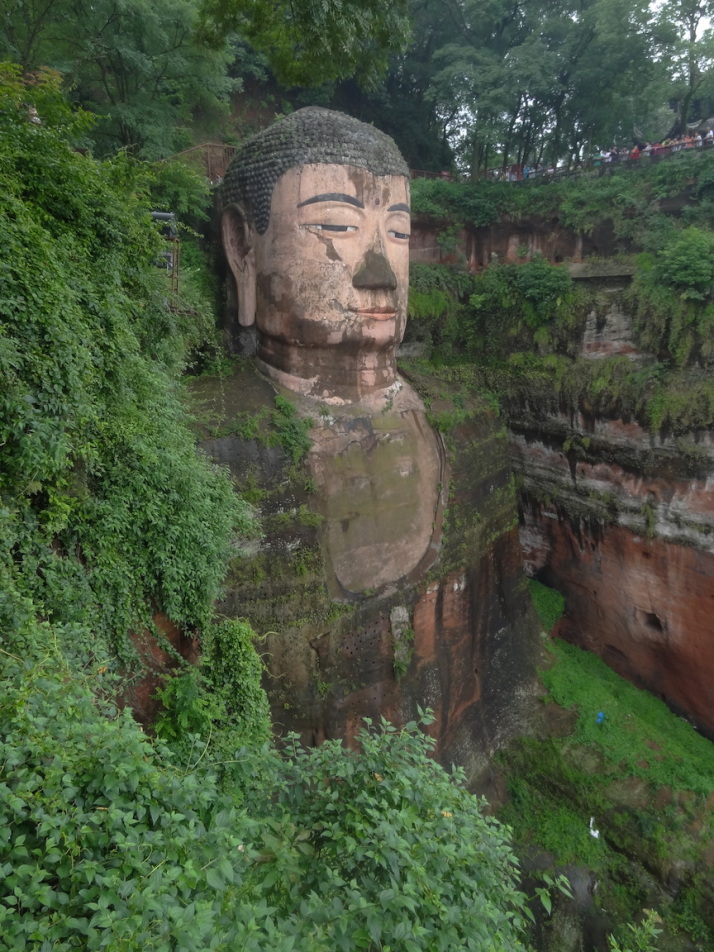 The Leshan Buddha, the biggest statue of Buddha in the World (notice the people in the top-right of the photo for a sense of scale..)

The biggest Daibutsuden or Buddha house in the world is in Nara, Japan, and even if it stood at at its original size instead of the current ¾ it still wouldn’t accommodate the largest Buddha statue in the world – the 71-metre (233 ft) giant seated Buddha of Leshan.

A very easy day trip from Chengdu on public transport, we arrived expecting just the main event and found a park of caves, statues and pavilions on the mountaintop that the Buddha is carved into. The Leshan Buddha, viewed from shin-level

The route starts level with the Buddha’s head, and narrowly twists back and forth as it descends to the small viewing platform at its feet. Niches along the way are carved with Buddhist motifs, and the changing perspective means the queue moves slowly because there’s always another photo to take! 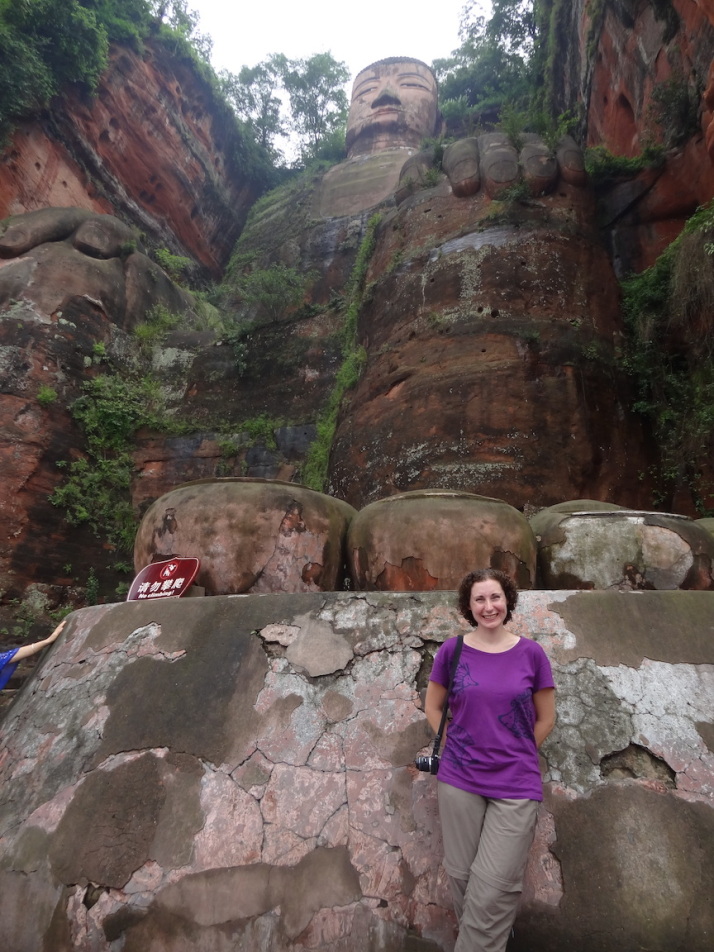 Julie at the foot of the massive Leshan Buddha statue

The passageway out was longer than the descent down, and brought us out at the south gate and an unexpected highlight of the day – the Mahao Cave Tombs Museum.. 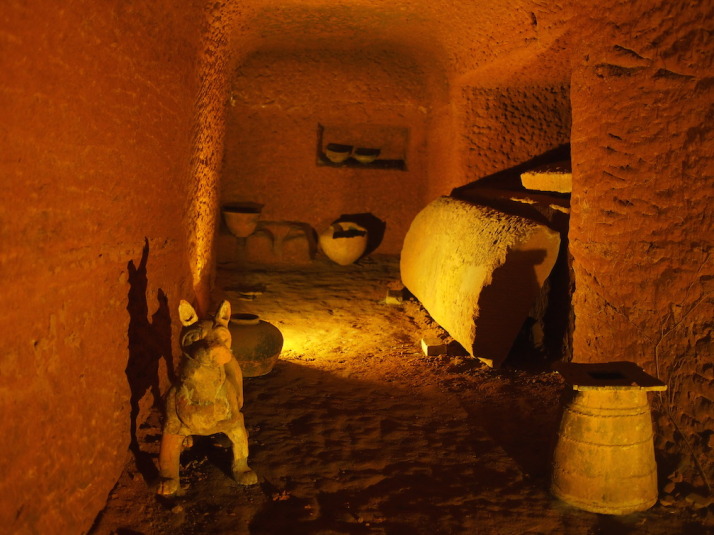 The Mahao Cave Tombs museum is quite small having only 2 rooms of artefacts, but the main attractions are the wonderfully lit cave tombs themselves. These tomb caves date from the Eastern Han dynasty (AD 25-220) and were built to house the remains of local nobles. The curtain call of the Sichuan Opera in Chengdu

A few years before we set off on this trip, I’d seen a short film about face changing opera, where the performers would change their masks so quickly that it was unperceivable to the watching audience’s eye. Having forgotten the name, I had originally recalled this as being a Chinese art, but when we didn’t find it on our first trip to China, I thought it might have been Japanese. Both China and Japan have an opera style called Noh, and while this does involve mask changing, the changes are done between acts or scenes. Imagine my delight when we arrived in Chengdu to find a sort of cabaret performance that culminated with Bian Lian – the very mask changing performance I had hoped to find! 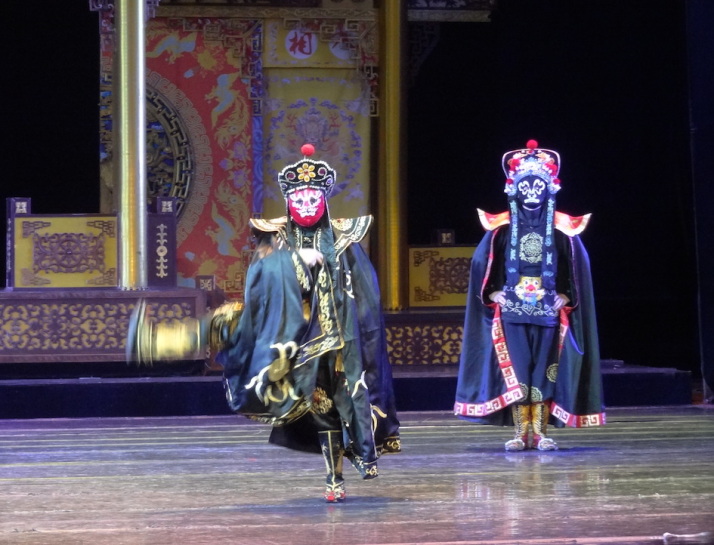 Bian Lian performers in the middle of their piece

The show we saw is clearly designed for tourists with Chinese and English introductions, a giant electronic subtitle board that almost kept pace with the action, and distinct set-piece acts very much like a mini caberet or variety performance.

The highlight for our hostel-organised group was undoubtedly the Bian Lian. Saved for last, 7 artists came on stage and wowed the theatre with their skill and speed. One, after the typical wave of the arm or slight head turn to trigger the change, almost dared us to see how fast he was by looking straight at the audience and simply giving a little skip – we didn’t blink and we still missed it. Audacious, unbelievable and spectacular. 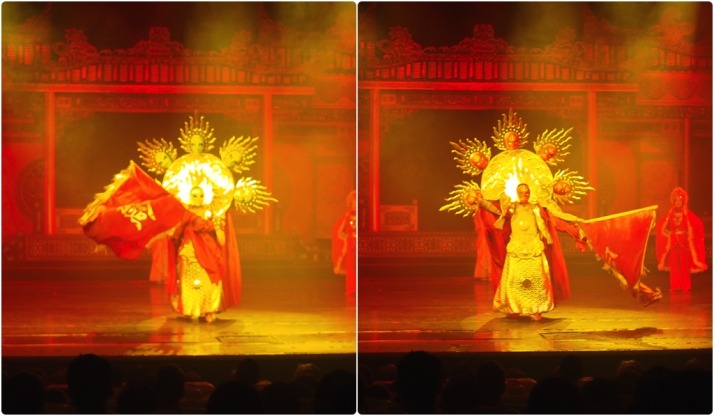 As well as ‘normal’ Bian Lian mask changing performers, there was a puppet Bian Lian, and this performer with 6 synchronised masks!