Villa Romana del Casale was a large Roman villa almost in the centre of Sicily whose remains include the best collection of Roman mosaics in the world. 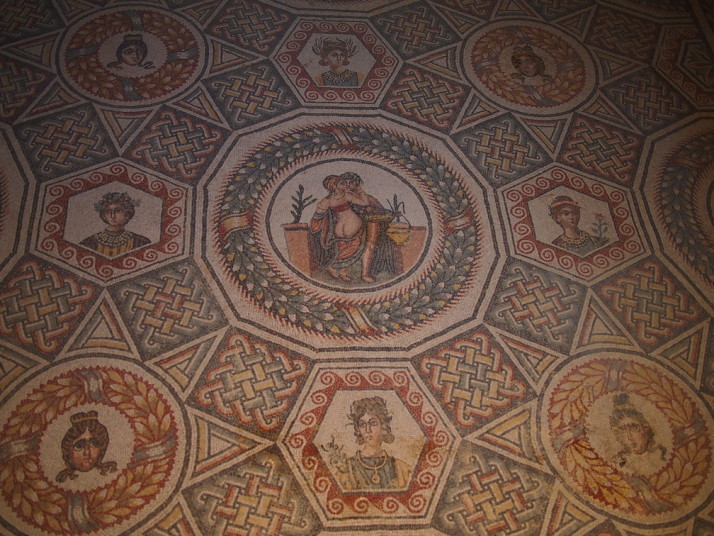 The mosaic floors of the Villa Romana de Casale are breathtakingly intricate. This central design in the master’s bedroom represents love and immortality, and features Cupid and Psyche

We’d originally planned to visit the volcanic island of Stromboli on our way to the Italian mainland, but when we found out the hiking tours were cancelled because it was likely to erupt again after the spectacular eruption 5 months ago in August, we changed plans and jumped on a bus to Piazza Armerina, a small town near Villa Romana de Casale. And we’re so glad we did instead of heading straight to Naples.. The former porticoed entrance court of the Villa Romana del Casale. The wall would have been Just beyond the row of pillars with a marble fountain in the centre

Originally built in the 4th century on the site of an existing villa, it was expanded a number of times before possibly being damaged or destroyed by invaders. Parts remained in use throughout the Byzantine and Arab periods until a massive landslide in the 12th century almost completely covered it. Forgotten, the area was turned over for cropland for nearly 700 years until the 19th century, when bits of mosaic and columns where found, leading to the first professional archaeological excavations in 1929. 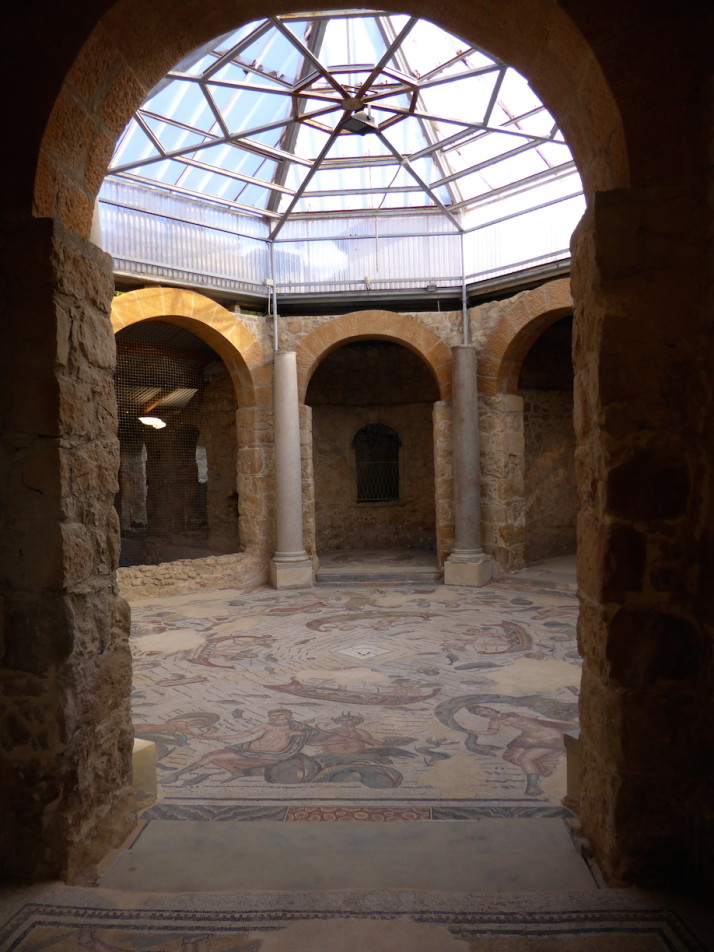 The walking route starts at the villa’s Roman bathhouse, which was open to the public and staying guests. This is the great hall of the frigidarium, an octagonal room with cold baths in the corners and corridors to the hot baths, massage rooms and the house. It reminded us of the Turkish baths we had in Istanbul but the decoration here is more impressive than the plain marble flooring of the hamams

There are many nice things about travelling off-season: generally the transport is cheaper (if it’s running); accommodation is easier to find (if it’s open); but our favourite benefit is the reduced crowds at tourist attractions (if they too are open). We’ve stayed with some lovely hosts in Sicily and Piazza Armerina was no exception, but the shorter winter days meant the shuttle busses for the 3km trip out of the town to the villa weren’t running. Having risen early intending to hike our host was having none of it and insisted he take us in his car! 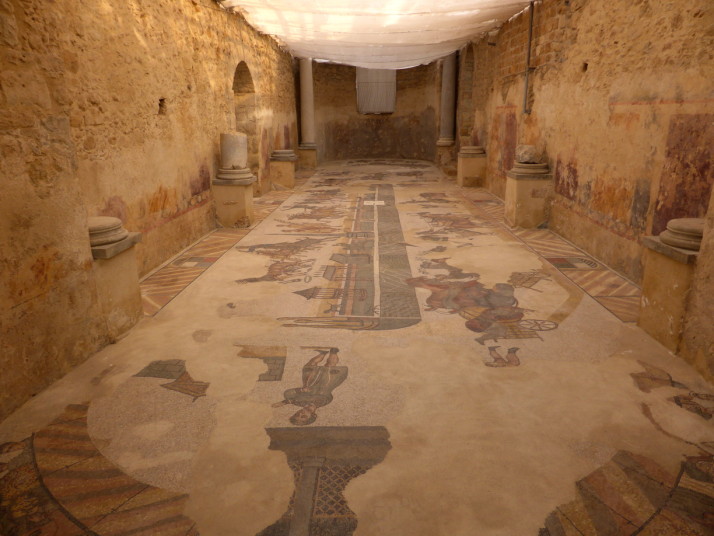 The two-apse room or ‘palestra’ is the grand entrance hall to the spa or Roman bathhouse for the villa. We’re viewing it from the ‘common’ entrance, the family and important guest entrance is on the right and the baths are to the left. The mosaic depicts a race of quadrigae (4-horse chariot) at the Circus Maximus in Rome

We arrived just a few minutes after it opened and we saw 2 other couples as we walked around, then a group of 6 or so just as we were leaving, so we had the whole place to ourselves and really took our time to study the stunning variety of mosaics and read the excellent information boards. 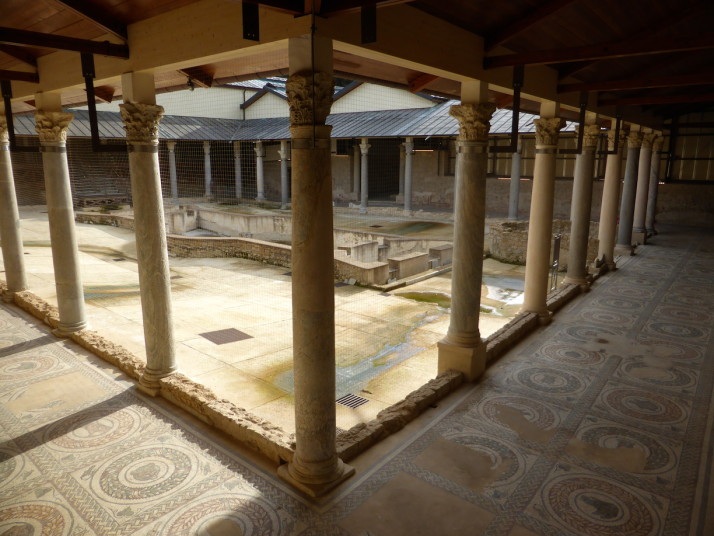 The central portico of the villa separates the service rooms, flats and halls for administration, from the boardrooms and the basilica 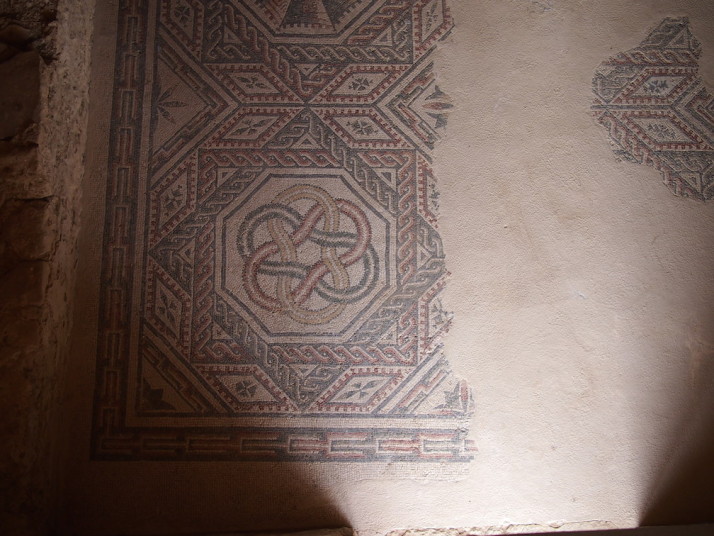 Most of the service rooms are decorated with elaborate geometric patterns, like this one in the 3rd service room, believed to have been for the domestic attendants to the adjacent rooms 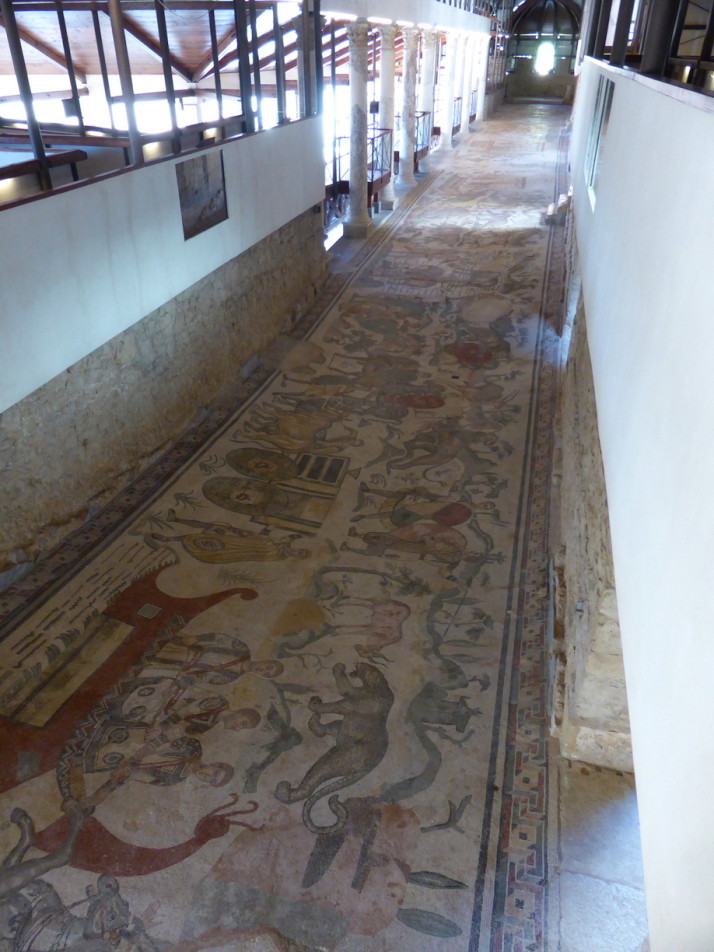 At the opposite end of the portico from the main entrance is one of the most famous pieces in the villa – the “great hunt”. It actually depicts the capturing of ferocious and exotic wild animals for exhibition in Rome, and is about 60 metres long 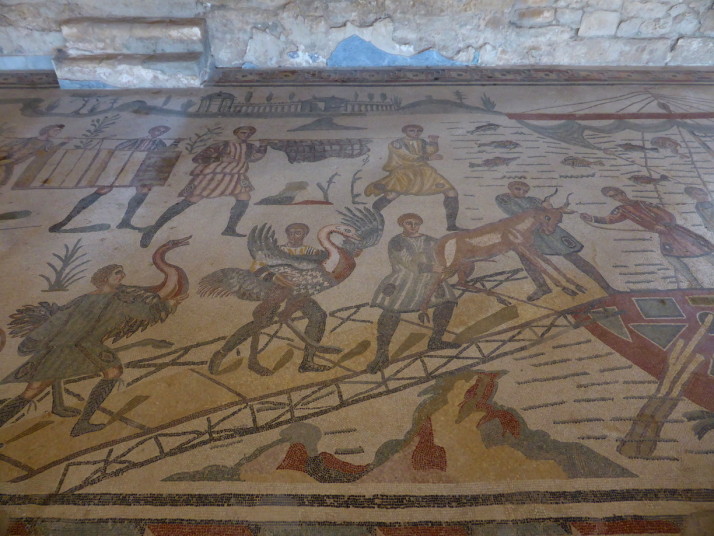 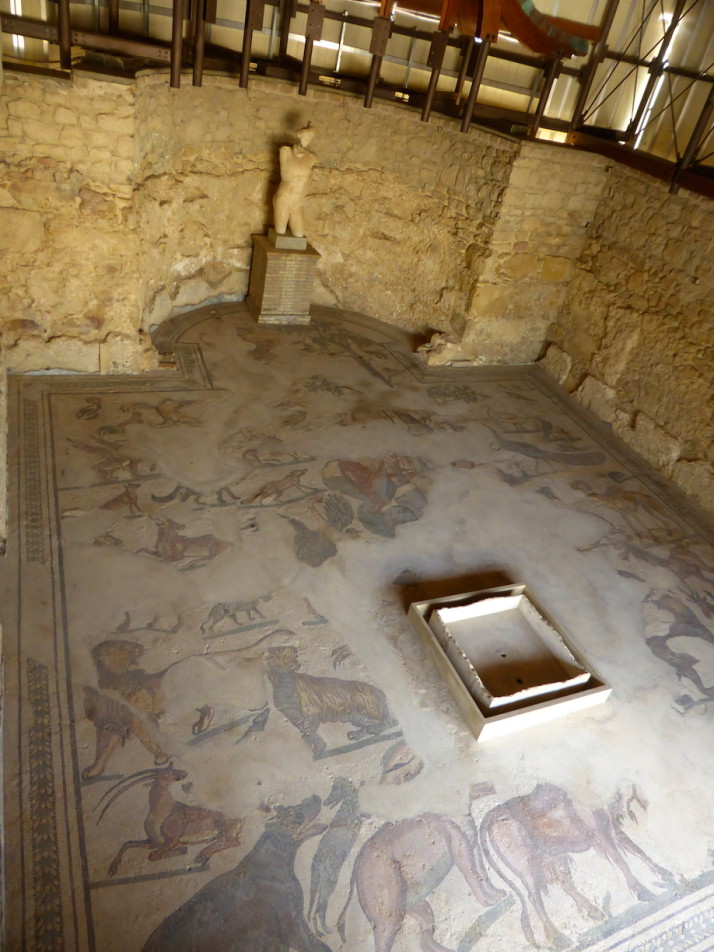 One of the boardrooms opposite the service rooms and apartments, this is the Diaeta of Orpheus, a splendid room whose walls were faced with marble. It is thought to have been used for summer banquets and musical entertainment. Orpheus is a mythical singer and poet surrounded by 50 species of animals arranged by size, with the smallest at the top in the alcove 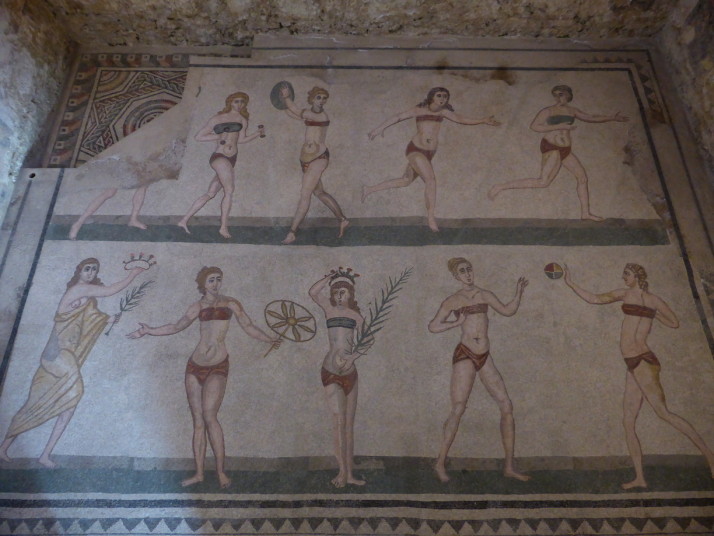 Probably the most famous of the mosaics in the villa – that of the nicknamed “bikini girls”. They’re actually athletes dressed in a light outfit for competition consisting of a strophium and subligar. The almost fully-clothed figure in the bottom left is handing the winner a crown of roses and a palm branch.
In the top-left is an earlier geometric pattern which was replaced, probably due to a change of function or use, but check out the vivid, vibrant colours – we tried to then imagine the entire villa like this. Wow! The route took us outside giving us a chance to warm our fingers a little. Next up was the triapsidal triclinium and as you already know that means, I need only talk about the mosaic floor which depicts the enemies of Hercules during his 12 labours. We think this area is currently being restored or improved for viewing as there were ropes over the entrance stairs and everything was covered in dust (yes, we hopped over ropes!) 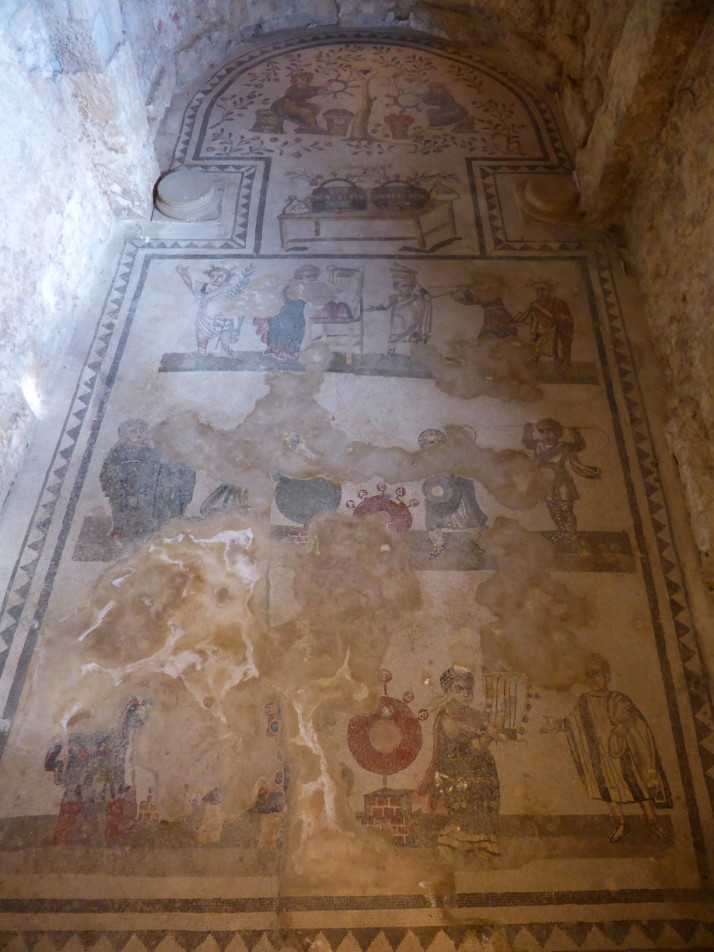 The route then took us through the most important rooms of the villa – those of the master’s apartment. This apsidal hall is believed to be the bedroom or study and features young musicians, actors, poets and mimes in theatrical competition Just next to the master’s bedroom or study is the aquatically themed semi-circular portico which served to join the rooms of the master’s apartment, providing cool air and water from a fountain in the middle. The scenes are of pairs of fishermen using all the tools and techniques of the day – nets, creel, trident and rod and line 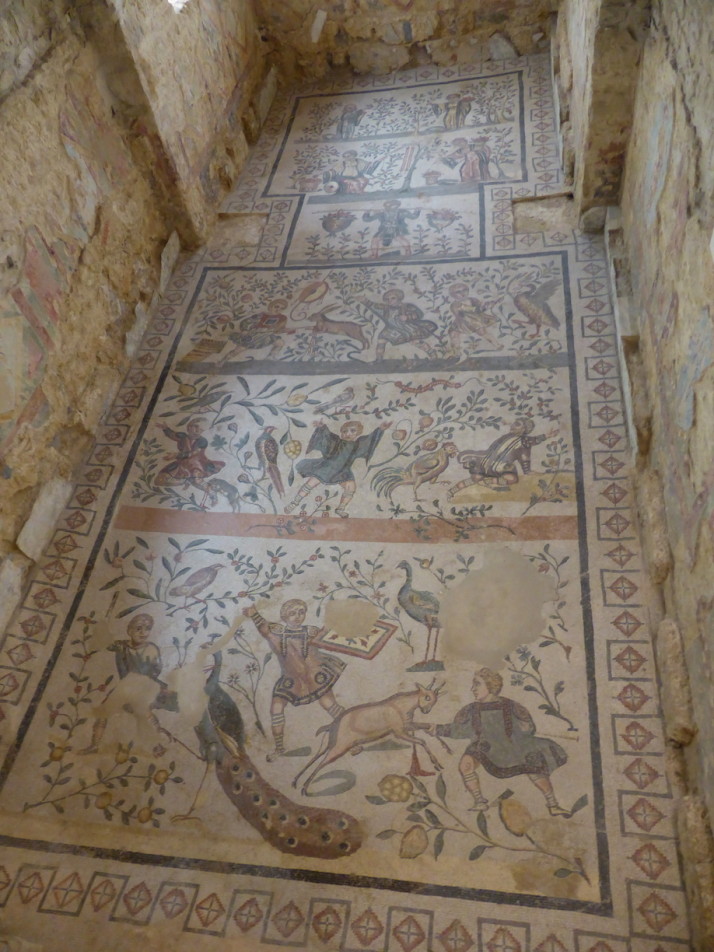 This is the other bedroom of the master’s private apartment. This time the flooring depicts children trying to capture barnyard animals, though not as successfully as their elders in the “great hunt” – one is bitten by a rat and another falls to the ground after being chased by a giant rooster! The second to last section is the mighty hall of the basilica, which was the most richly decorated in the villa – the walls and floor were lined with polychrome marble sourced from all over the Mediterranean. Excavations discovered glass mosaic in the apse vault which would have looked amazing from the entrance hall right through the courtyard 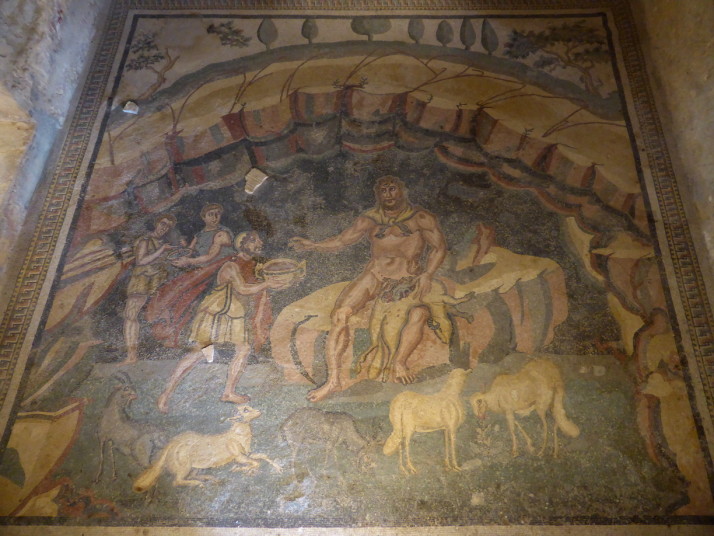 The final 3 rooms of the route comprise the master’s northern apartment. The antechamber depicts the famous mythological scene of Ulysses escaping from Polyphemus. Many of the rooms are of mythological tales that have moral lessons. The lesson here is Ulysses represents human rationality succeeding against the brutality and unmoderated greed of the giant Polyphemus. I imagine that walking through each room is to be reminded of the intended moral behaviour

We were very fortunate with the weather, but although it was a bright, clear day, most of the mosaics are inside the villa and the protective roof meant that we got a little chilly. After a good 3½ hours following the route, we warmed up with a spot of lunch on a bench in the car park in the sun before hiking the 5km back into town.

We’ve added Stromboli to our ever-increasing list of places to come back to, but we’re so pleased we decided to visit Villa Romana del Casale. Not only are the mosaics simply amazing – and that’s saying something after Monreale Cathedral and The Church on Spilled Blood – but I think that means we’ve been to every UNESCO World Heritage site on Sicily!