Ulan Ude is the capital of the Russian oblast (state) of Buryatia. It was our last stop in Russia before crossing the border into Mongolia and we found it to be a friendly and interesting small city.

Ulan Ude has the somewhat dubious honour of having the world’s largest Lenin head on display in the main square. It is 7.7m tall and weighs a massive 42 tonnes. Our hostel had a collage of comedy photos of the statue which inspired us to try a couple of our own! 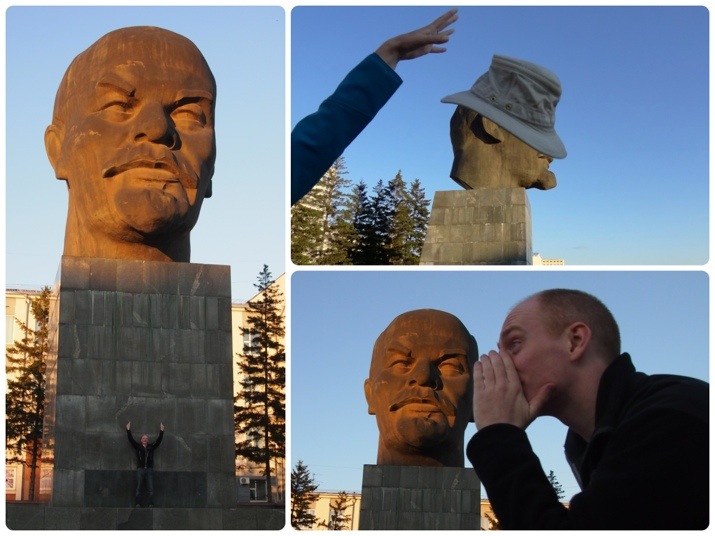 See if you can spot Andrew in the first picture to get an idea of the scale! Also, there’s a caption competition for what he’s whispering to Lenin – post yours in the comments

We treated ourselves to a pub lunch on our first day in the city. We had to contend with a menu written only in Russian, but by this stage we knew enough words to work out what each section was (soups, salads, main courses, grill…) and so we took pot luck. Andrew chose from the main courses something that we thought was chicken, and contained a word that was something like ‘Mexican’, and I chose a random soup (chanakhi). Andrew’s was indeed a kind of Mexican chicken (well done us!) and mine was a fabulous, very savoury broth with huge chunks of meat (mutton or lamb I think).

The local specialty of Buryatia is a dish called ‘Buuza‘. We tried these twice, the second time they were delicious homemade ones at Nadya’s birthday party – we even got the recipe: mix beef and pork mince, diced onion and a little bit of water, form into balls roughly 3cm in diameter, wrap in a simple dough of flour and water, pinching up the edges to seal them. They are cooked by steaming, and should be eaten by hand using the dough to catch the juices. 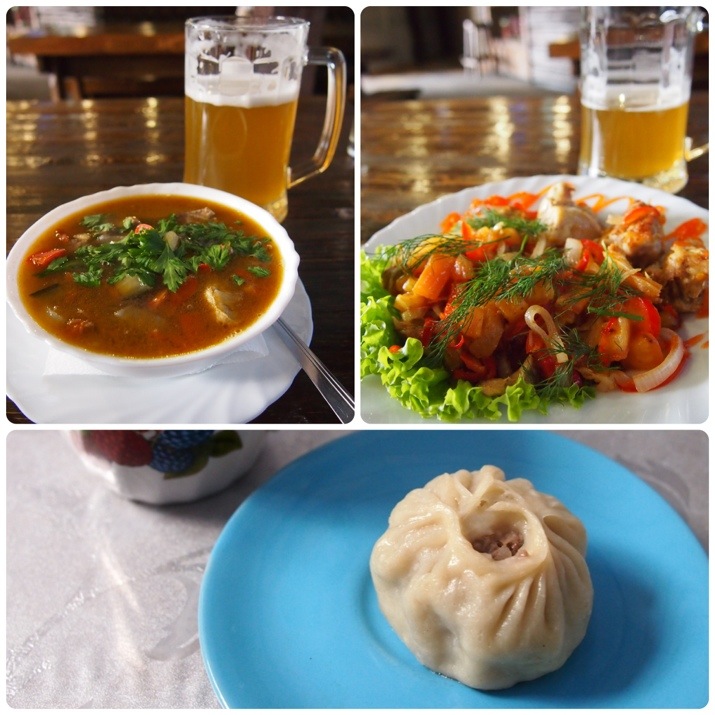 Soup and Mexican chicken at the Bochka pub, a single Buuz

On our first afternoon we had a wander around the town and then visited the Buryat History Museum. The local people (Buryats) are mainly Buddhist and the top floor of the museum was a display of devotional paintings (thangkas), statues, and costumes used in Buddhist mystery plays, which had been collected during the closing of the monasteries after the Revolution. It was especially interesting to read the description of the meaning behind some of the images as we’re likely to be visiting quite a few Buddhist sites over the coming months in Mongolia, China and beyond! The rest of the museum was devoted to the history of the region from ancient times, through Genghis Khan and the Mongol empire, to the nomadic cultures and railway building in modern times. 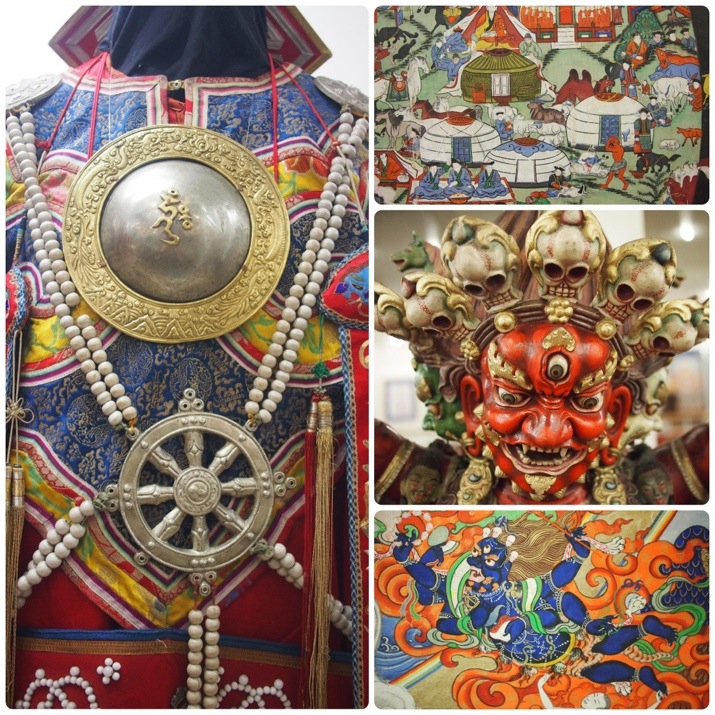 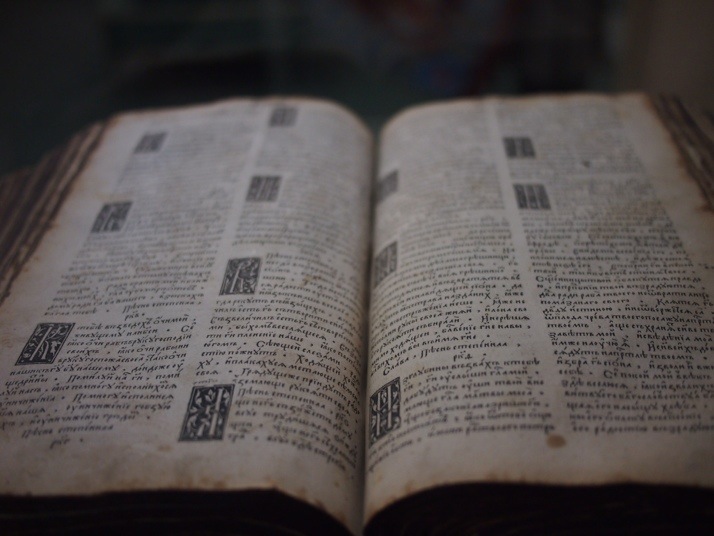 A copy of the ‘Ostrog bible’, the first complete publication of the bible in the Church Slavonic language printed in 1580

Having learnt a little bit about Buddhism at the History Museum, the next day we set off on the 1 hour bus journey to the Datsan, or Buddhist monastery, at Ivolginsky. As instructed by our guidebook, we followed the path clockwise around the site, turning the prayer wheels as we went – the big ones took quite a bit of effort! The temples themselves were beautiful, very colourful and different to anything else that we’ve seen in Russia.

The Datsan is also home to the body of the 12th Khambo Lama who ‘died’ in 1927. He stipulated that he should be buried in the lotus position and exhumed after 30 years. When he was dug up in 1955 the monks found his body to be miraculously preserved. In 2002 he was exhumed again and still found to be looking as if he’d only recently died. The body is now kept in the monastery, but we didn’t see it as it is only brought out a few times a year. The faithful believe that he didn’t actually die but reached the state of nirvana while he was meditating, so it is just that his spirit has left his body behind. 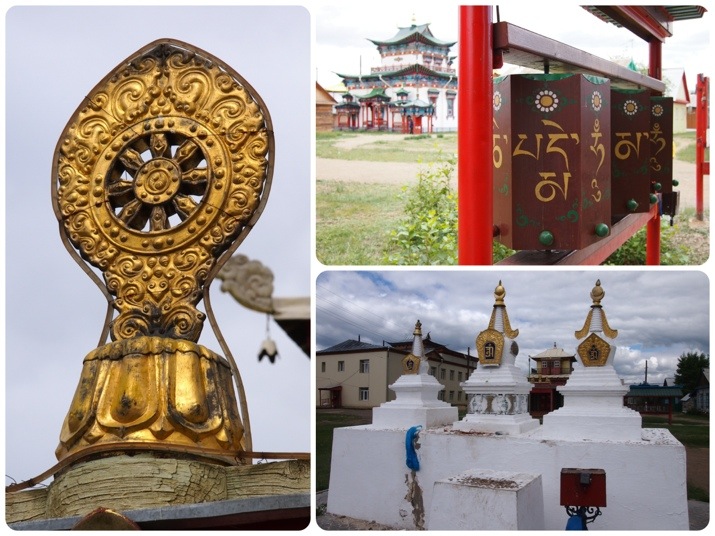 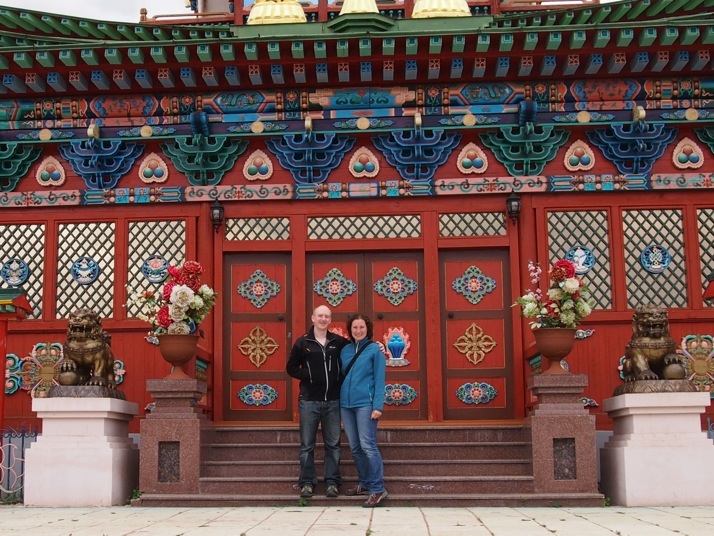 Us outside the colourful main temple

In Ulan Ude, we spent yet another day at an open air ethnographic museum (see also Riga and Suzdal). But this one was a little bit different as it contained examples of wigwams (called chooms in Siberia) and gers as well as wooden houses and churches similar to those in the other museums. It also has a rather sad zoo section of Siberian wildlife. The animals seemed to be well fed and their enclosures kept clean, but it was heart wrenching to watch the majestic Siberian tigers and brown bears pacing up and down in their small cages. 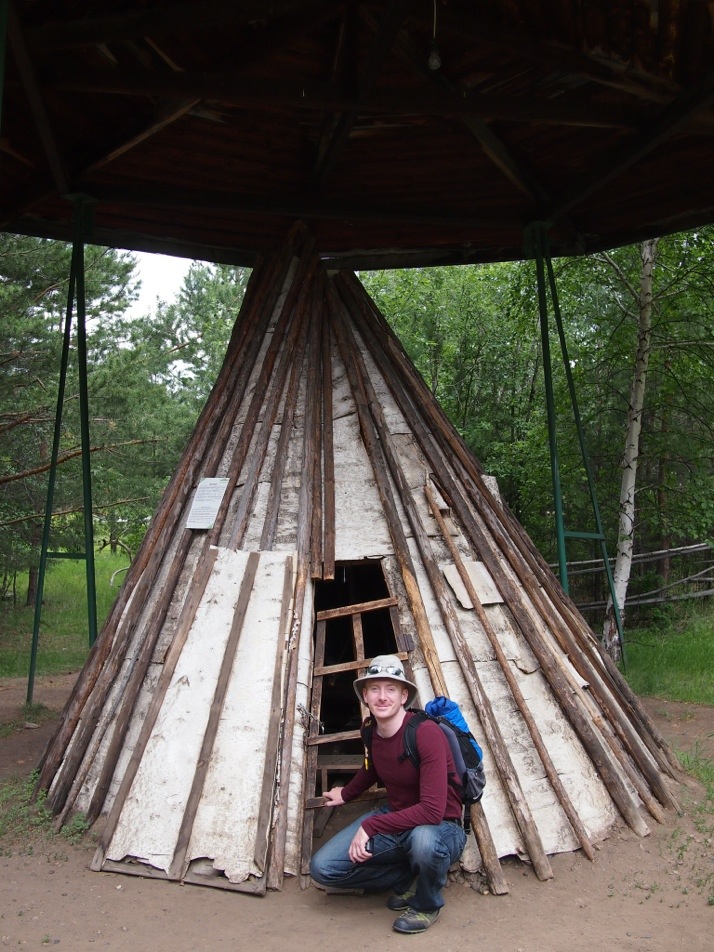 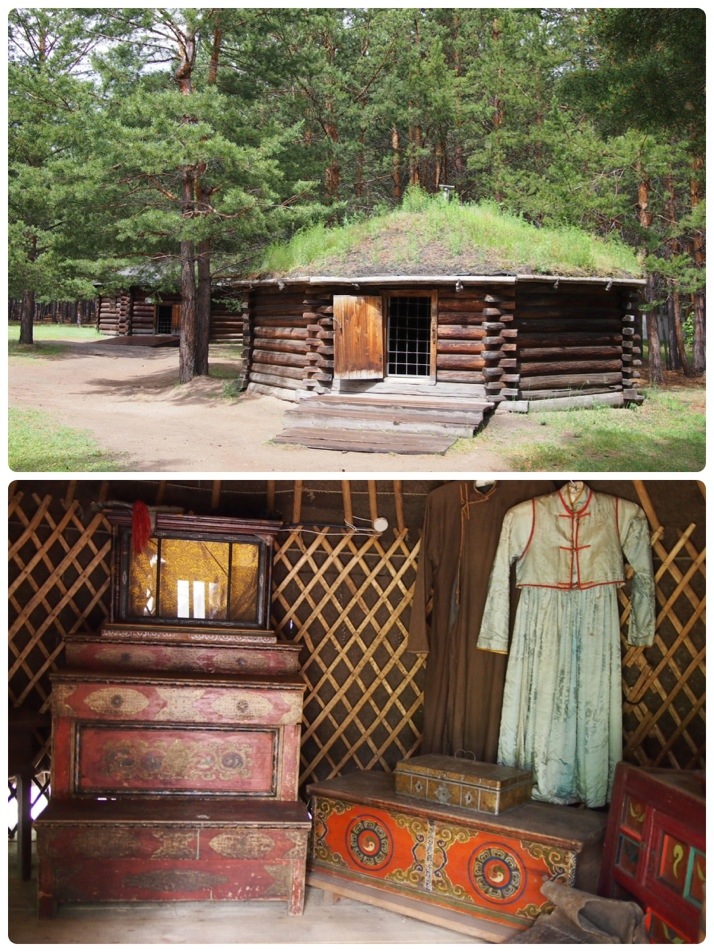 A wooden ger (I’m not sure that the green roof is strictly traditional…), reconstruction of the inside of a felt ger