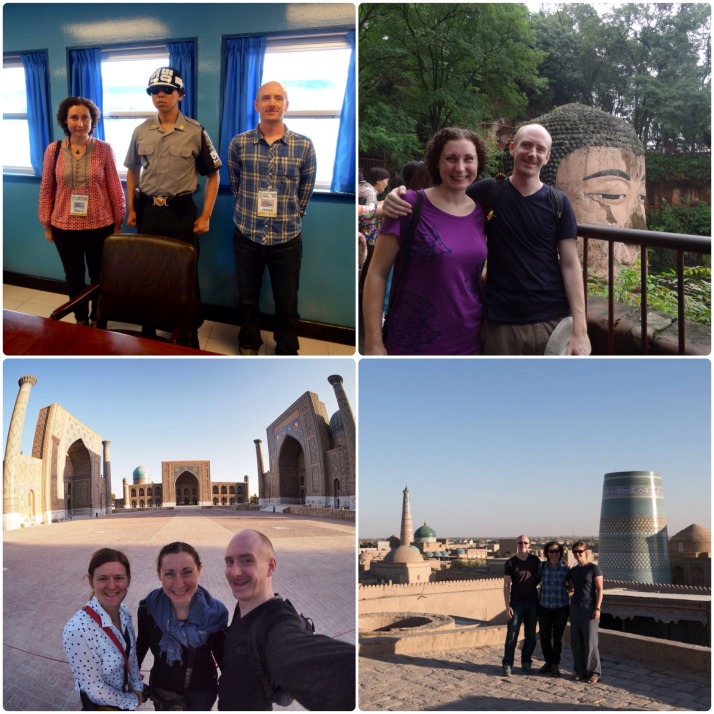 Clockwise from top left: With ROK soldier at the DMZ in Korea; the largest Buddha in the world at Leshan; sunset in Ichon-Qala at Khiva [photo credit: Jo Harris]; Registan Square in Samarkand

Not quite. Day-to-day expenses haven’t been too high, but three sets of flights, expensive visas for Uzbekistan and travel insurance renewal in September all bumped the total up. Our average daily spend over the three months has been £75.52. Our daily spend to date since we left home has been £70.63. 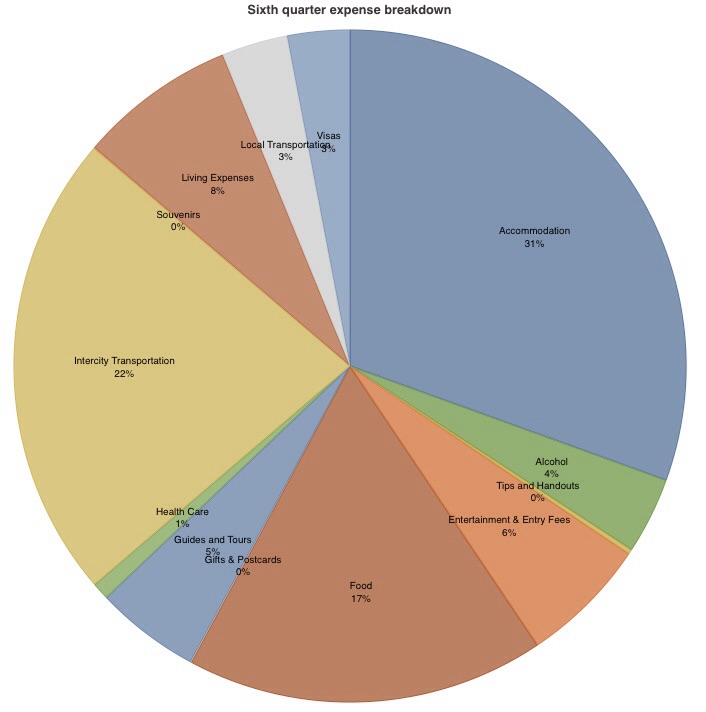 That the Korean language is written not in characters representing words, but with an alphabet called Hangul. At first glance it looks like it’s made up of thousands of characters like Chinese or Japanese, but it’s actually built from just 24 basic letters arranged in blocks. We got to the point where we could recognise a good few and decode whole words with the aid of a cheat sheet!

Julie – A soft bed… Many have been the nights when I have wished for my own comfortable bed in the last few months as the concept of springs and mattresses doesn’t really seem to have caught on in the budget accommodations of China and Uzbekistan. The most extreme example would be the bed we had in Wuhan where it is no exaggeration to say that we may as well have been sleeping on the floor…

Andrew – I’ve really missed driving. It’s not the convenience as we’ve packed pretty light and we love public transport – especially overnight trains – but the enjoyment of motoring and, as we’ve seen quite a few motorbikes and scooters, of riding too. Though I’ll see how I feel about a motorbike when I get back to the British weather..

This is usually a really hard question to answer, but this time we both immediately said the Registan in Samarkand. We were really looking forward to seeing it and had a nagging worry that it might be a let down but it was even better in real life, absolutely jaw-dropping.

In Samarkand we’d met the same portly taxi driver pretty much every day near the Gur-E-Amir Mausoleum offering to take us to Shakhrisabz. The evening before we planned to make the trip we went to seek him out and arrange to meet the following morning. At the mausoleum we didn’t see him in his usual place but Andrew soon spotted a large guy a little way off chatting to another taxi driver. He rushed over to shake his hand and say ‘hello’ but as the man turned we realised it was a different driver… He was so dumbstruck by a random tourist shaking his hand that we were walking off giggling before he recovered himself enough to shout ‘taxi?’ after us!

The owner of the Mirzo Guesthouse in Tashkent, Murod. He’s an affable retired history professor who is always keen to have a chat although he doesn’t speak much English (he absolutely pounced on any guests who spoke Russian). When he found out that Julie’s degree is in maths he excitedly told us (mostly via his son Oybek who runs the guesthouse with him and speaks excellent English) about medieval Persian mathematician Al-Khwarizmi, who came from Khiva, and whose name serves as the root for the words algebra and algorithm. When words fail, Mr Mirzo is proficient at communicating through the language of music, liking nothing better than getting out his dutar on an evening and serenading any guests who happen to be about! 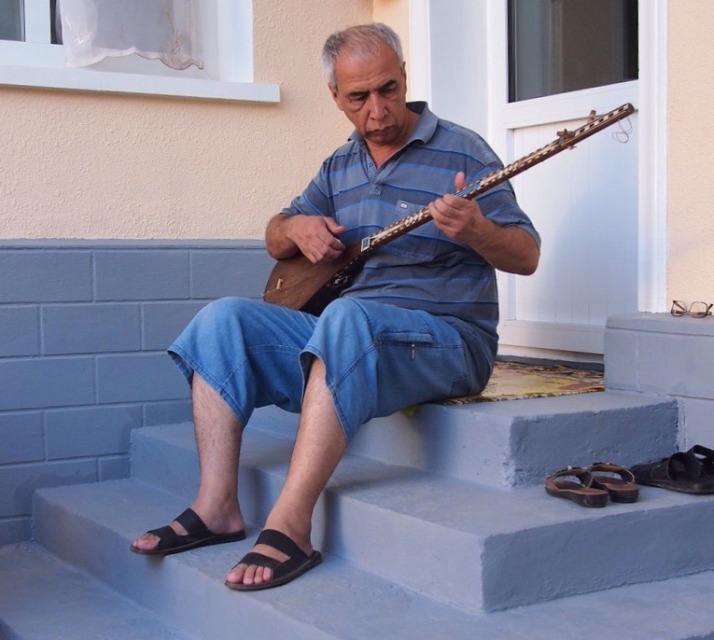 More so than on our first trip, we found the language barrier in southern China harder. It’s not that we encountered more Cantonese where our very limited Mandarin didn’t work, it was that our pronunciation made planning our independent travel very difficult on occasion. For example, we were trying to buy our train tickets to Zhangjiajie but the woman behind the counter didn’t have a clue where we wanted to go. It was only after showing it on a map to a student who just happened to be in the queue with us, that we learned how to say it properly! (it’s “Djang-Jar-Jay” in case you’re wondering!)