The most common way to cross between Armenia and Georgia is the overnight train between the capitals, but as we wanted to visit the northern UNESCO monasteries of Sanahin and Haghpat we put them at the end of our Armenian adventure so that it’d be a short hop to the border. Here’s our account of the straightforward crossing using public transport, the only drama being the manufactured kind at the hand of taxi drivers keen for business at the end of the off-season. 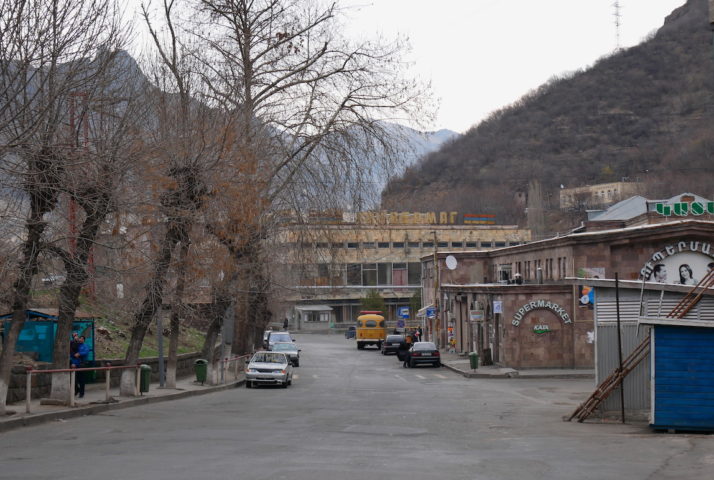 We’d been told by our guesthouse that the marshrutka from Alaverdi to Bagratashen (the Georgian border) would leave at 08:50 so we got there about 10 minutes early, which just added another 10 minutes to the wait as it didn’t arrive until 09:15. One local taxi driver insisted that there wasn’t a marshrutka to the border that day, and another said that if it didn’t arrive by 9am then it wasn’t coming at all so we should obviously just hire his taxi instead. We politely declined and said we weren’t in a hurry! 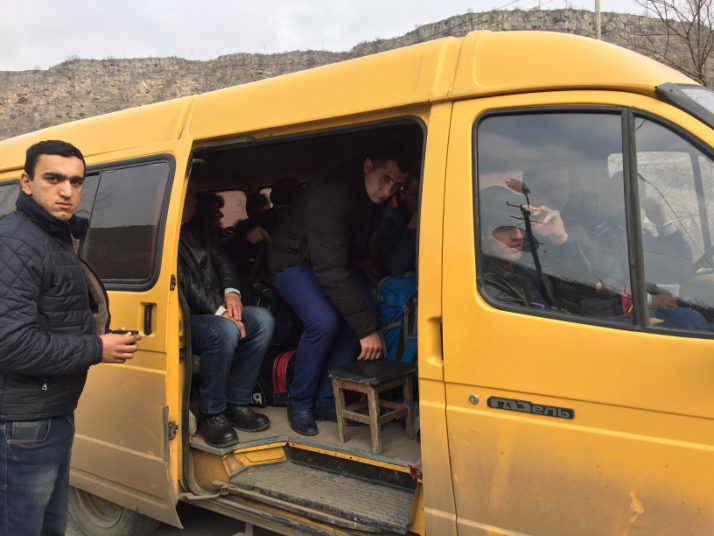 The marshrutka arrived already pretty full with locals. They made space for our bags under the bench seats and I ended up on that small wooden stool next to the sliding door – at least I had a seat! 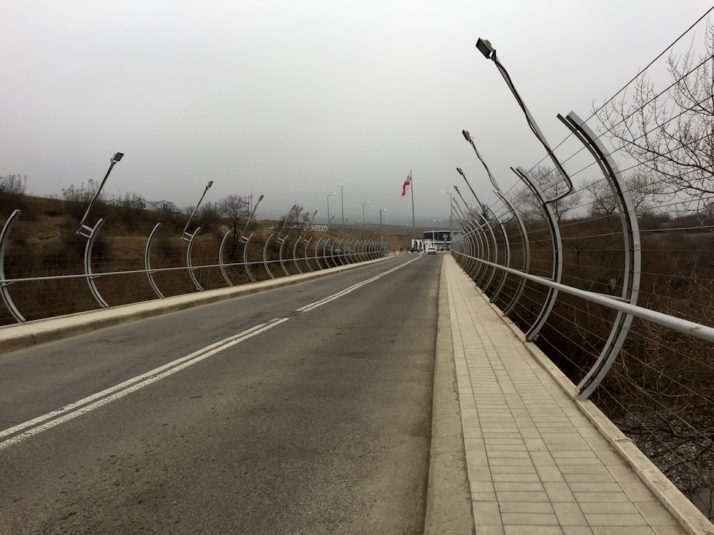 The footpath follows the road over a bridge, and from there the Georgian border building awaits

The marshrutka dropped us about 100 metres from the border and the driver pointed us in the right direction though it was pretty obvious. After dredging up “hello” in Turkish to speak to some very friendly Turkish lorry drivers waiting to cross we walked through the almost empty Armenian Border Control building, had our passports stamped without a question or delay and continued through the building and outside.

It’s a 5 minute walk across a bridge spanning the Debed river to the Georgian Border Control building. Just inside the entrance is a bank counter – it’s a very good idea to change any remaining dram or withdraw some Georgian (GEL) money here as we didn’t see an ATM the other side of passport control.

All of our bags were X-Ray scanned before reaching passport control. No queues or questions for us here either and we walked out the other side into the small car park looking for our onward marshrutka – a Ford Transit or Mercedes Sprinter-style van.

Fortunately for us the marshrutka driver had parked right next to the exit and was standing in front of his van having a smoke so we asked “Tbilisi?”, he nodded and waved us on board.

A taxi driver saw us getting on and had a bit of a go at him in Georgian – we presume because we’re tourists and should therefore have taken a taxi. His taxi. Our marshrutka driver didn’t seem at all bothered by his plight. We waited in the marshrutka for about 10 minutes to see if anyone else arrived before we set off. 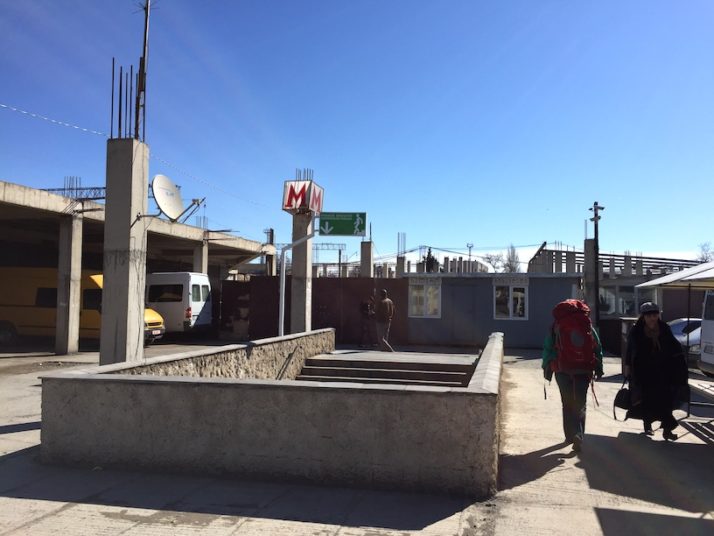 The Tbilisi metro is 0.50 Lari to go anywhere, charged onto a contactless travelcard which is also handy for buses and the cable car, and costs a refundable 2 Lari which can be purchased from the counter inside any metro station

The final destination in Tbilisi is the western bus station which is also conveniently close to the Samgori metro station making it trivial to get anywhere in the city. Including a trip on the metro, the total cost from Alaverdi to Tbilisi was the equivalent of £2.70 each.