Datong is a strange place. For a start, the city centre is partway through being rebuilt. That means that they are knocking down perfectly fine but not very attractive buildings in order to recreate the historic centre… I think it’s being done to make the city more attractive to tourists, but the scale of the work is so huge that it will surely take decades to recoup through tourism the amount being spent on construction. 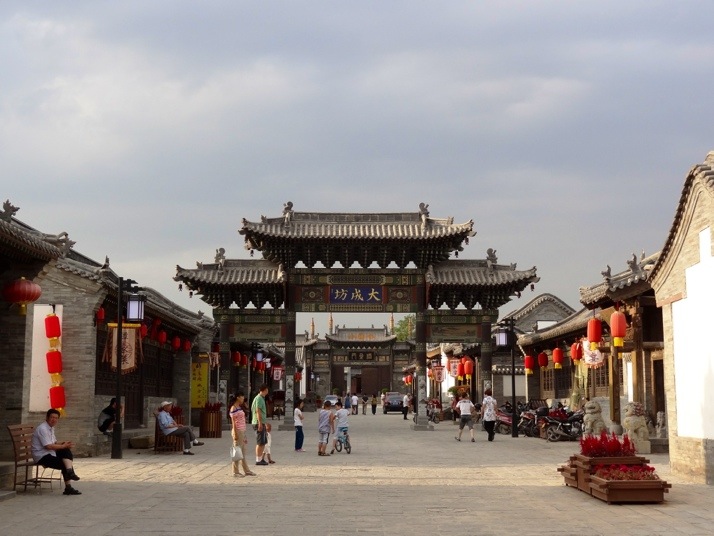 We also felt a little like celebrities here. It’s sufficiently off the beaten path that the locals are very curious about anyone ‘foreign’ looking! I think we’ll encounter this quite often as we travel through China but I don’t know if I’ll get used to it. To give you some idea:

Getting to Datong was very straightforward. As the train takes about 6 hours we decided that it wasn’t worth doing an overnight trip as we wouldn’t get enough sleep so instead we took the bus which is faster (between 4.5 and 5.5 hours). We were worried about buying our bus ticket but in the end it was more complicated to find out which bus station in Beijing we needed, and how to get there (for anyone having the same difficulties it’s Liuliqiao which can be reached by subway lines 9 or 10). To buy the ticket, we said ‘Datong’ and showed the clerk the Chinese characters for the city name in our guidebook. She turned her screen around and showed us the time of the next bus and the price. Easy peasy. As an added bonus we got views of the Great Wall during the journey which whetted our appetite for when we make the trip there! 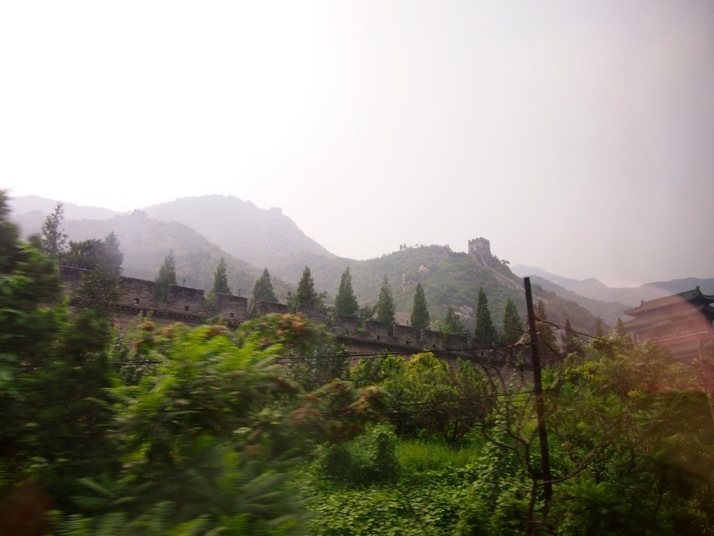 The Great Wall from the bus

We stayed at the brand new Fly by Knight Hostel, the original branch of which is in Beijing. We had a large and comfortable private room with floor to ceiling windows. As the hostel is located on the 22nd floor of a brand new apartment building this means that we had incredible views over the city. 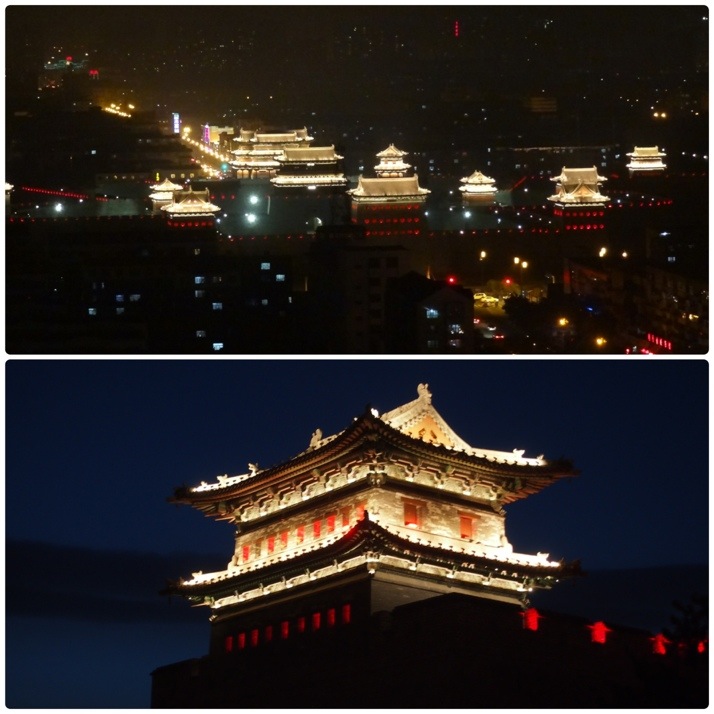 The city walls are lit up at night

Sights in the city centre

One of the authentically old parts of the city centre is the Nine Dragon Screen which was built in 1392. According to the information board in the grounds

it was originally situated in front of Dai-king Zhu Gui’s mansion who was the 13th son of Zhu Yuan Zhang, the first emperor of the Ming dynasty.

The mansion has long since gone, but the screen is well worth a quick visit. And yes, the first thing we did was to count the dragons and check that there were nine! 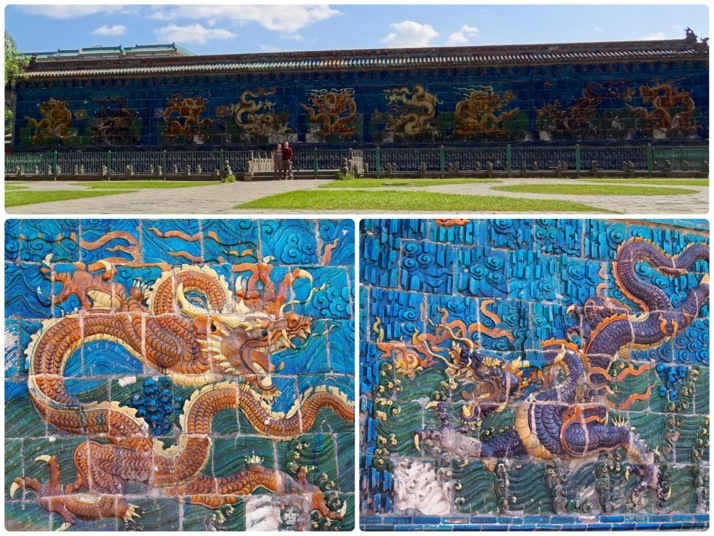 Us in front of the Nine Dragon screen (we really are there in the middle, it’s just very big – 45.5m long!), and two of the dragons

We discovered that it’s also possible to walk on the city walls. Amusingly, the entrance ticket describes them as Ancient City Walls despite the fact that it’s not yet possible to walk all the way around because they haven’t finished building them! It was a nice walk though and we amused ourselves by watching the Chinese tourists on the tandems that are for hire on top of the wall. 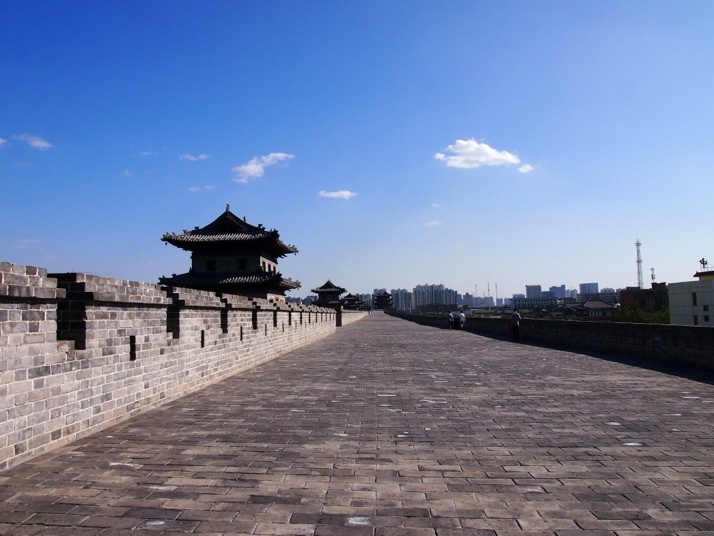 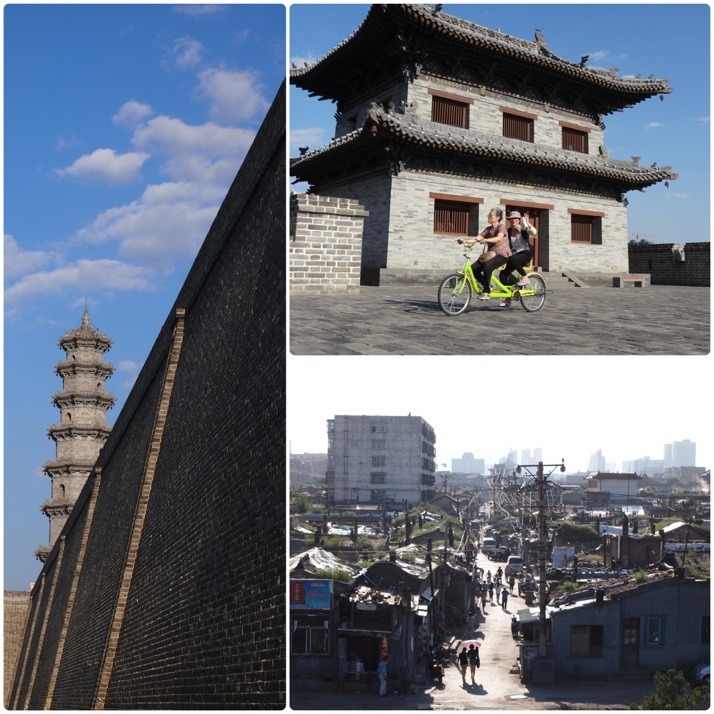 There’s a fake pagoda as part of Datong’s city walls, Chinese tourists on a tandem, and view of a not yet demolished part of the city centre from the walls

From Datong there are 2 day trips to major sights which are really the main reason for visiting the city:

The Hanging Monastery is located near the town of Hunyuan, a two hour bus ride from Datong. Again it was easy to buy the bus ticket and the bus driver put us into a taxi for the last 5 minutes to the site of the monastery. If we had been a bit more on the ball we would have tried to communicate to the bus station taxi driver a time when he should come and collect us. Unfortunately, we thought he was just going to hang around, but he was nowhere to be seen when we came back out. We waited to see if he would return (with more tourists from another bus for example), but in the end we had to haggle for a taxi back to Datong – they quoted such a ridiculous price for the 2km to Hunyuan bus station that it just wasn’t worth it. Anyway we had plenty of time to bargain so we were quite pleased to get the price down from 200RMB to 140RMB.

The monastery itself is built into the side of a cliff and dates from 491. It looks as if it’s kind of floating there, as it’s supported by beams drilled into the rock face as well as stilts to the ground. The mountain peak above it protects it from rain and strong winds, and its position 50m from the ground means that it doesn’t get flooded. The buildings are now just a tourist attraction and there is a prescribed path around the 36 tiny rooms and linking walkways. Some of them are a little precarious and there aren’t many spaces for passing people so we sometimes felt a bit pushed along by the horde of Chinese tourists behind us, but the up close views of the roofs and the building’s quirky structure were worth it. It’s construction is not the only unusual thing about the monastery, it also has elements of all three of the traditional religions: Buddhism, Confucianism, and Taoism. 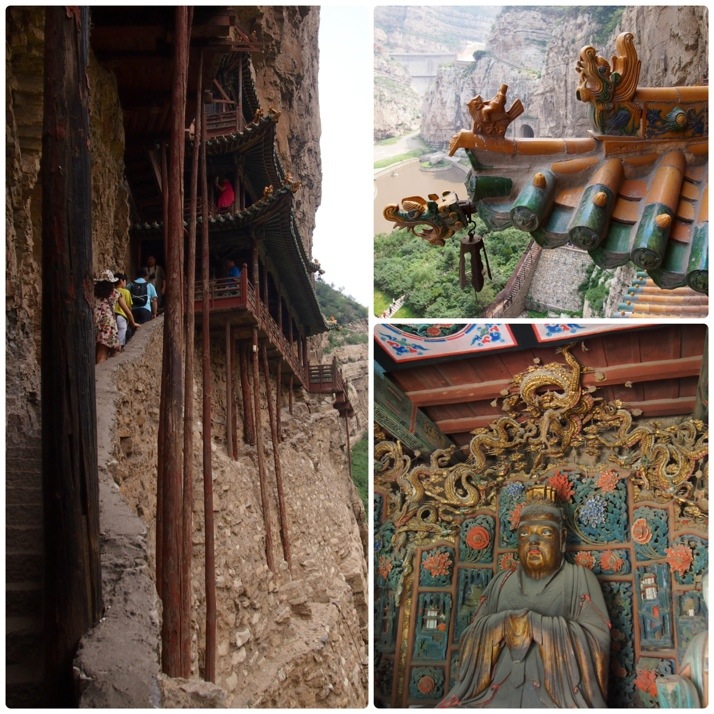 Narrow staircase between levels of the monastery, colourful roof tiles, and inside one of the temples

The Yungang grottoes also date from the 5th century and feature Buddhist carvings and paintings in dozens of caves. The cave decorations range from bright wall paintings to huge Buddha statues (some are nearly 20m high). We enjoyed the variety and the scale of the place is really magnificent. 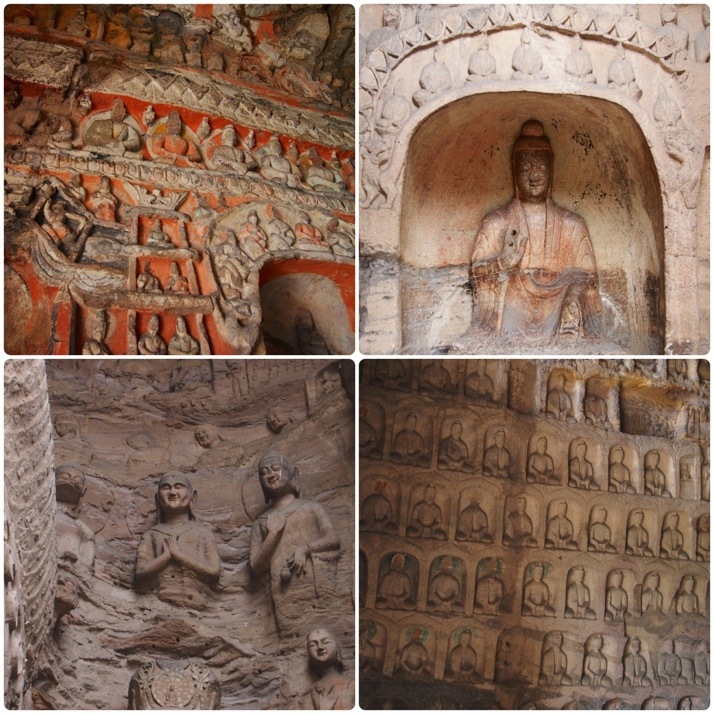 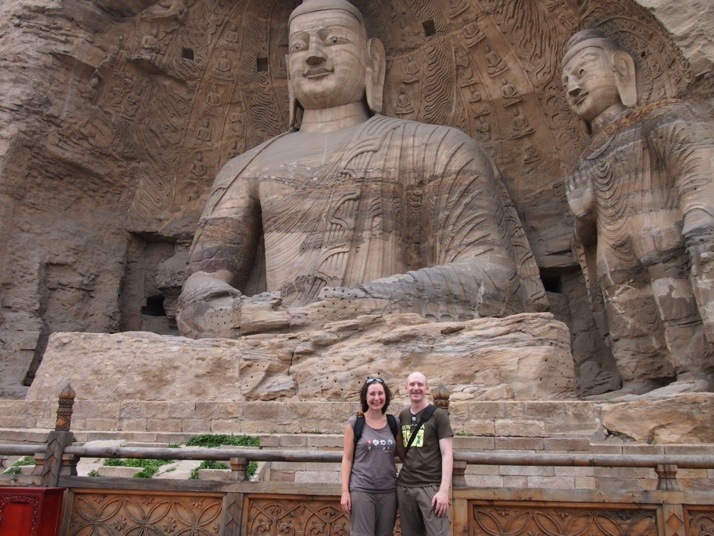 Us in front of the 13.7m high White Buddha (cave no. 20), the cave entrance around this statue has collapsed

The caves’ original purpose was of course worship and Buddhist visitors today still burn incense and pray. A new temple has also been built on the site.

Burning incense, new statues inside the temple, the newly built temple complex is on an island We had a bit of trouble finding the Nine Dragon Screen at first and stopped in a local restaurant for lunch and to ask the way (travelling tip for China: copy out the Chinese characters for the sight you want to visit before you leave your hostel, or carry your guidebook with you – showing someone the written Chinese is much easier than the blank look you get if you try to say it). Lunch was potato starch noodles in what looked like chilli soup although it wasn’t actually too spicy. Potato starch noodles are not easy to eat with chopsticks – if I didn’t know better I would think they were made from jellyfish, they’re slimy and gloopy and fall apart when you lift them too high from the bowl! They were surprisingly tasty though. 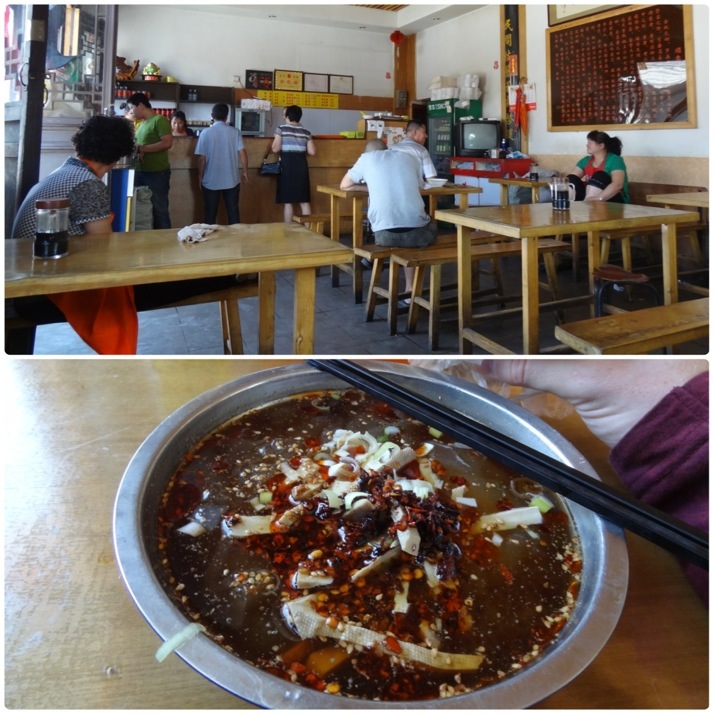 The restaurant, and the noodle soup (the noodles are all lurking below the surface in this picture)

But our favourite place to eat in Datong (we went there every day!) was a street stand just along the road from our hostel. It was run by a husband and wife team. She shaped and cooked bread rolls on a charcoal stove and he shredded the (pre-cooked) pork with mild green chilli and some of the pork cooking gravy to stuff the freshly baked rolls. Delicious! 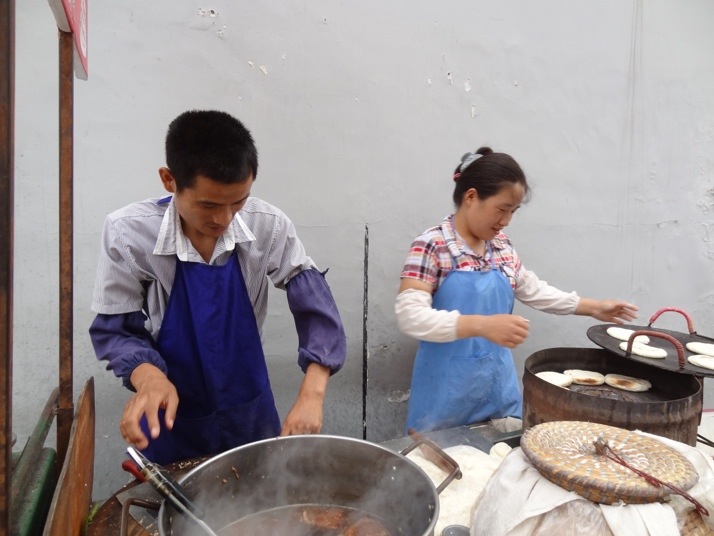