Starting at 7am in Bayamo, we arrived by taxi in Santo Domingo at the foot of the Sierra Maestra mountains and the entrance to Turquino National Park at 8:30am.

There was a little waiting around until the 4WDs had ferried various groups to the starting point and then it was our turn. The low-ratio gears in the people carriers made short work of the steepest roads in Cuba (some gradients were up to 45%!), even with 9 of us, everyone’s 2-days worth of luggage, a guide and a driver onboard! The starting point, 950m above sea level, is a concrete plateau or turning circle where a signpost points right for the Comandancia de la Plata, and left to Pico Turquino. From here it’s a 13 km hike where we gain just over 1,000m to reach the summit of Pico Turquino, the highest point in Cuba!

Full of energy, spirit and new faces to get know, we set off apace down the wide and easy-going track, which soon narrowed to near single-file well-maintained forested trail. 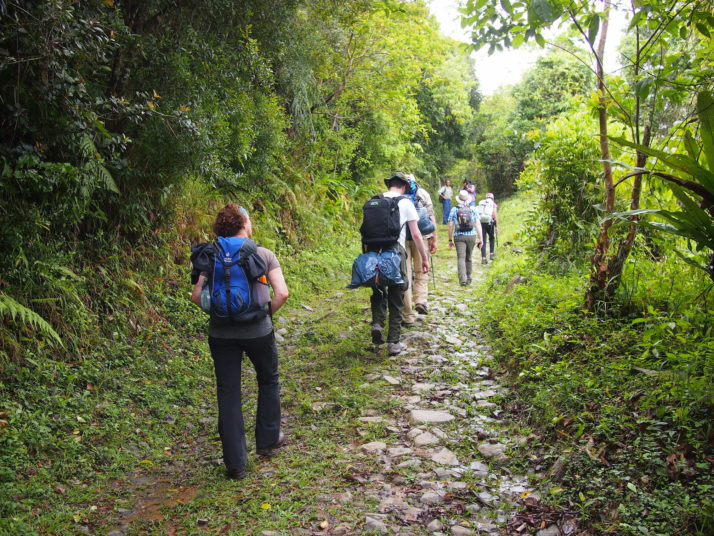 Our group starting the hike to Pico Turquino

We’d hoped to see plenty of wildlife and we weren’t disappointed: We saw woodpeckers, Tocororos (the national bird of Cuba because its plumage is the colours of the Cuban flag: white, blue and red), a cute little green and white fluff-ball of a bird called the Cuban Tody Flycatcher, and even hummingbirds doing fly-bys right past our heads! 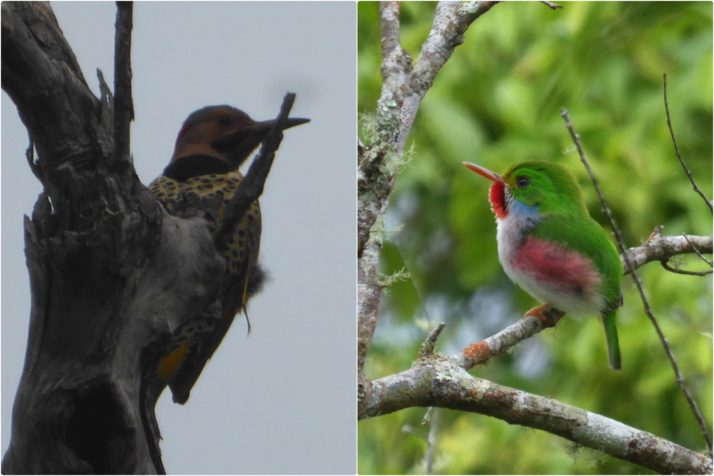 Our guide Raul was very good at stopping to point out the different flora and fauna, and at taking the time to explain a little more about them. He had a smartphone with him, and when he stopped to take a photo with it I knew it must have been for something good and close by; I took a couple of steps back to join him and saw, about 4 metres away, another Tody Flycatcher shouting at the top of his little voice!

Also in our group was a French couple and the guy was just as knowledgeable about the birds as Raul, it turned out he writes books about them! Julie with our informal guide and translator

The forest was lush with orchids, lichen and various reptiles and insects too.. 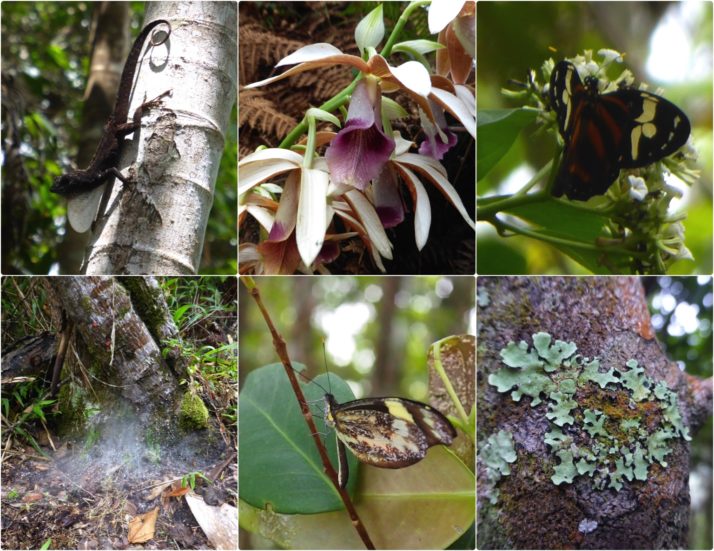 Some of the flora and insects. Clockwise from top-left: A small lizard shows off its white throat; wild orchids; we didn’t see many butterflies; but there was plenty of lichen; another rare sighting of a butterfly; blankets of spider’s webs like piled up snow at the foot of trees. We didn’t see any spiders though!

The final kilometre felt like it was really twice as long to our tired legs, and after a particularly muddy section of the trail we emerged at Camp Joaquin just after 3pm, the welcome sign greeted us with an altitude of 1364m though we’d certainly climbed more than the 414m difference since the start given the up and down terrain. After picking our bunks in the shared bunkhouse I decided to take a very cold bucket shower before we sat down for lunch. 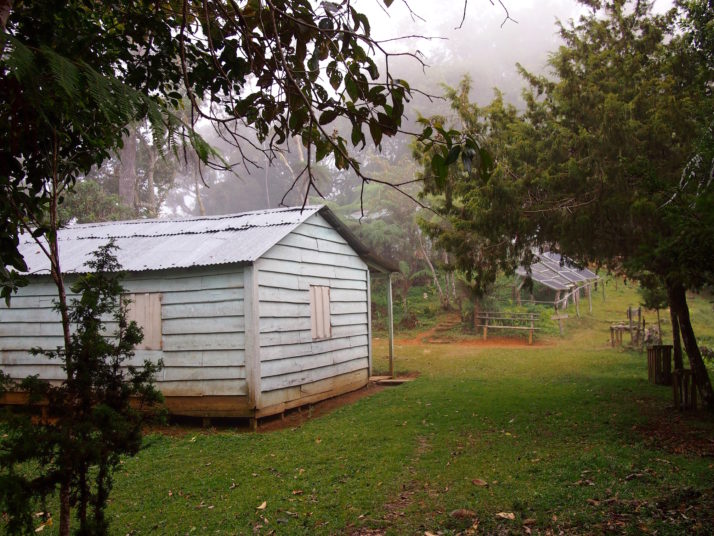 Arriving at Camp Joaquin. The bunkhouse is the building on the left 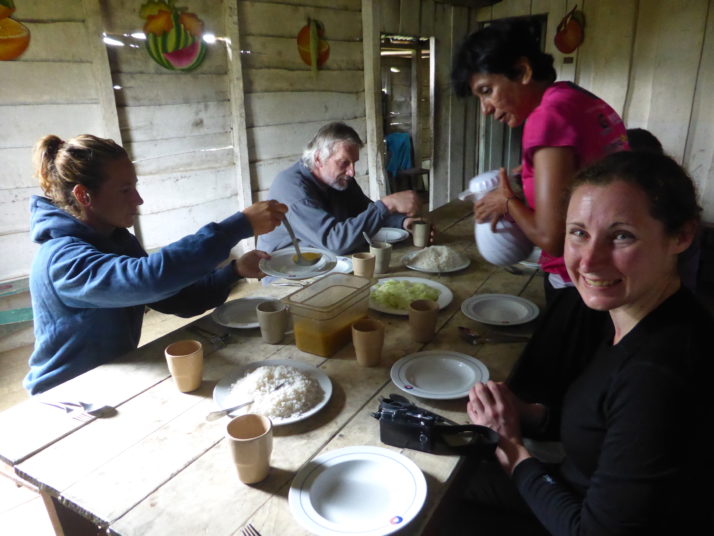 Our group sharing out the well deserved lunch 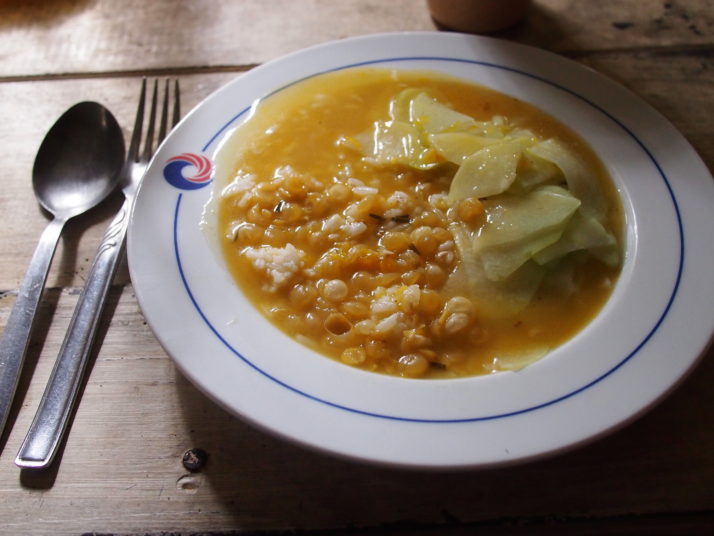 Mmmm.. a hot meal of plain rice, bean soup and chayote – a vegetable that tastes like cucumber

Day 2 – Camp Joaquin to Pico Turquino, then down to Santo Domingo

Alarms went off at the unsociable hour of 4:30am, and after a simple breakfast we started the final 5km ascent in the dark. I was the only person without a torch, making do with the auto-focus lamp on my camera which was enough in 2 second bursts for me to get my footing. The start was a long section of muddy stairs with the occasional handrail, and we all found it a heads down challenging start to the day. The second day started in the dark, and involved a lot of up and down as we worked our way towards Pico Turquino

As it started getting lighter, we saw that the cloud that had come in the night before was still with us and we wondered if it would clear or be clearer by the time we made it to the top. 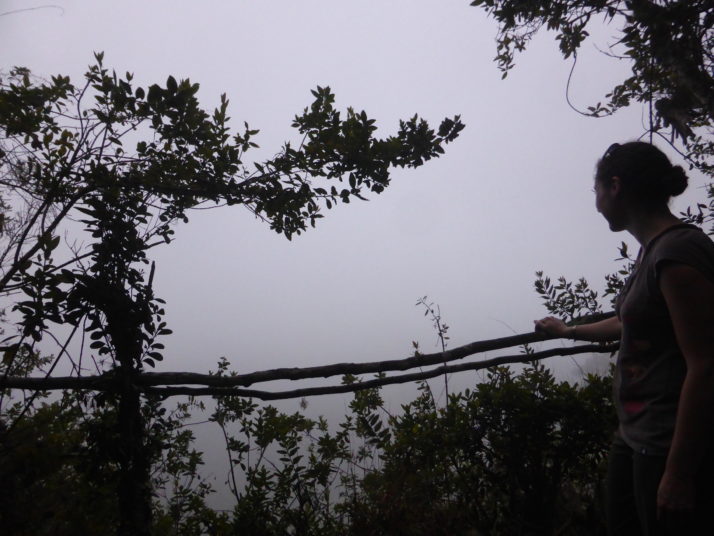 Mirador means viewpoint in Spanish. Not much of a view past the trees this time!

Raul kept our spirits up with startlingly accurate descriptions of the trail ahead and how long it’d take to reach the next km marker or resting spot. Just before 9am we turned a corner and entered a small, foggy clearing – we’d all made it! Made it! The top of Pico Turquino, if you can see it! 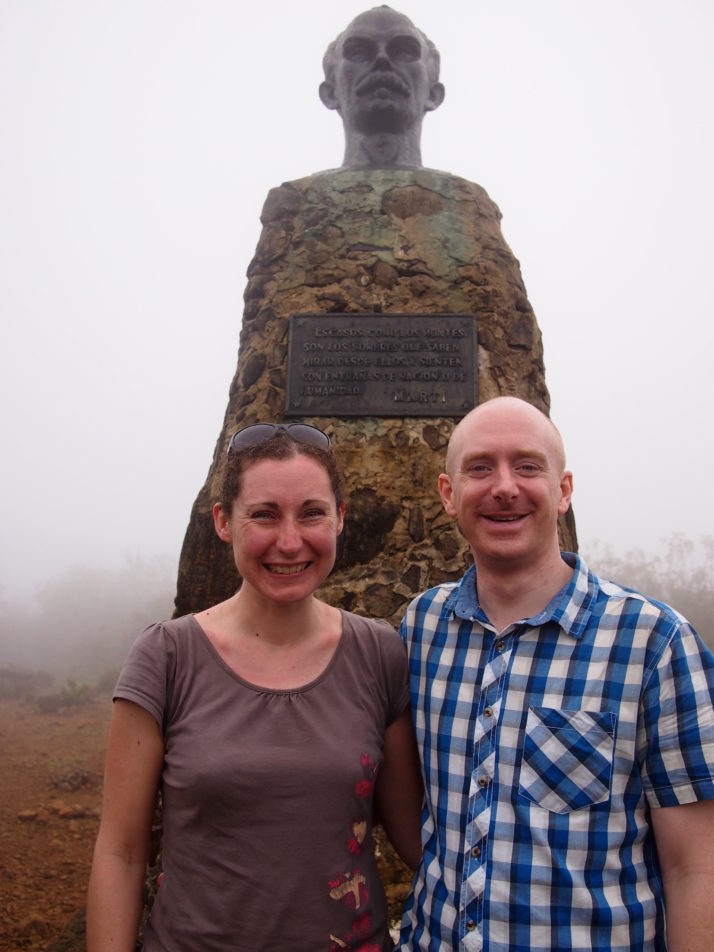 Us with José Martí at the top of Pico Turquino

Everyone shared out the various snacks they’d brought, and we took it in turns to have our photo taken with the giant José Martí that had been hauled up some 63 years prior, before bidding him farewell and starting the 5km descent back to the camp.

As I may have mentioned previously, I much prefer hiking up to hiking down, and I don’t think I was the only one who was starting to feel tired legs and sore knees, but the scenery was new because it was now light enough to see it! 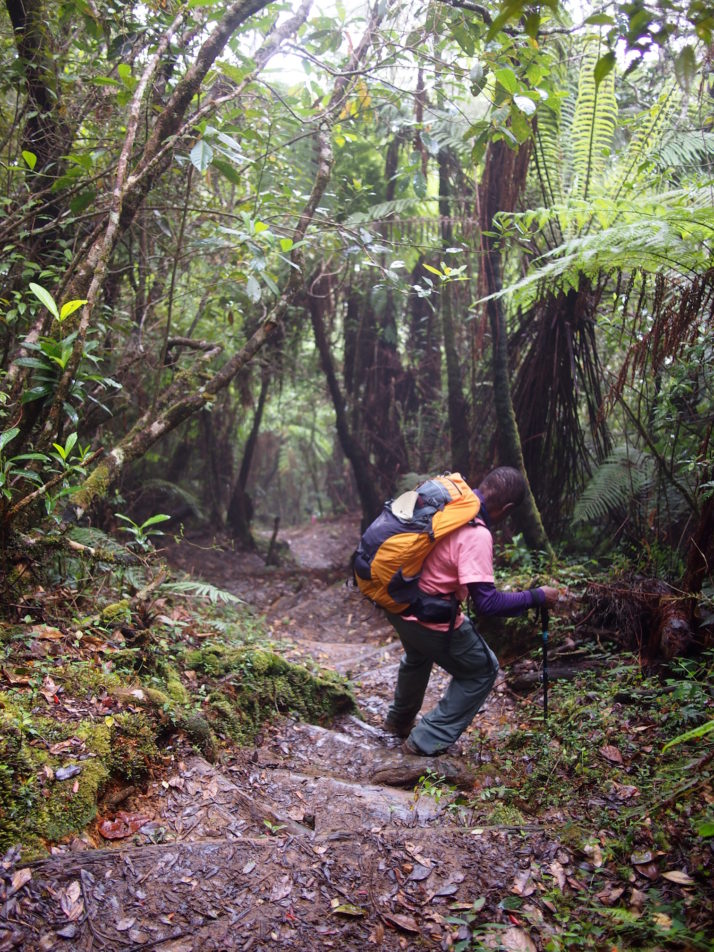 Moremi, Julie and I taking it easy on the descent 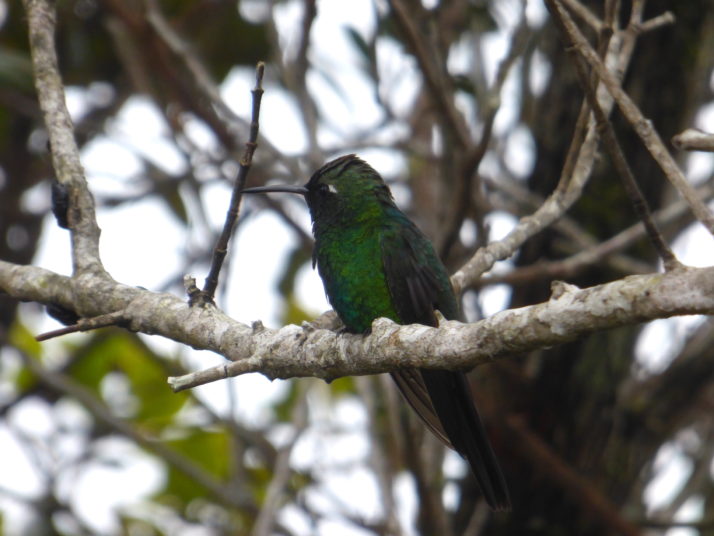 A hummingbird stopped on a branch next to me to say hello!

Stopping for lunch at the camp was very well received, mostly for the chance to sit down for an hour to rest our legs! Refuelled and re-packed, the only way was to continue the trail down the remaining 8km – it didn’t sound that far considering we’d already done 10km before lunch! 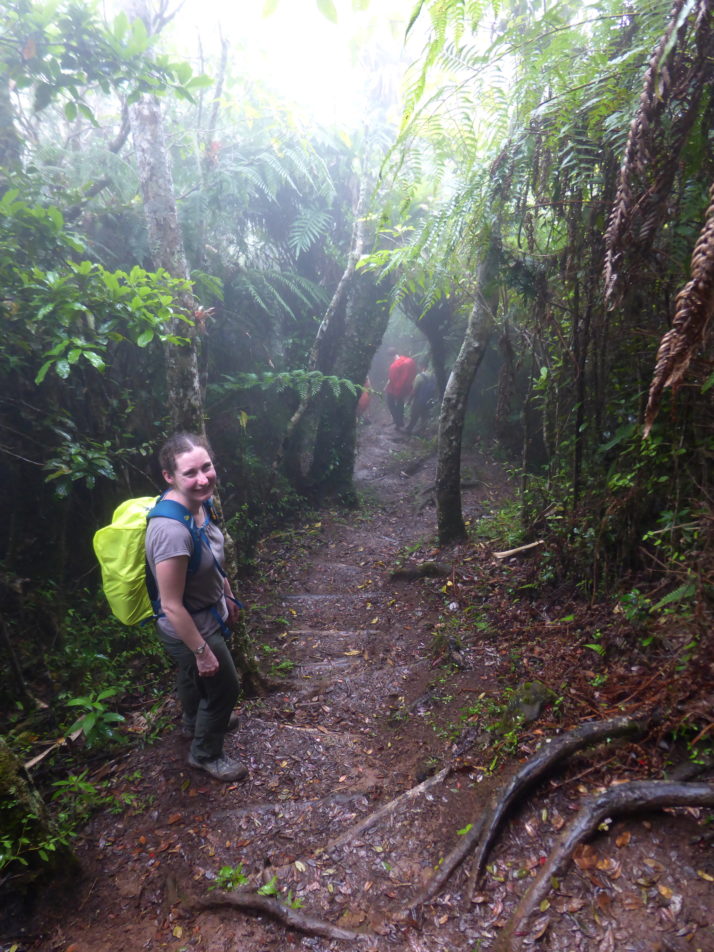 No wonder we couldn’t see them at night, they’re black and tiny!

With about a kilometre or so before the end the misty fog turned to rain. Everyone bar Julie and I donned their waterproofs – we’d left ours behind as we’d tried to pack light, figuring that we’d just get wet – and we got very wet indeed! So wet that we thought the 4WD wouldn’t take us back but they weren’t the least bit concerned! Look at the relief! The final stretch of hiking in the rain wasn’t the most pleasant bit – we can’t wait to get into the jeep for a soft-seated sit down having hiked 18km!

Pico Turquino is a beautiful and challenging hike. We saw some colourful wildlife and met some adventurous people though we were all a little disappointed that the weather wasn’t better on the second day.

We awoke from our deep restorative slumber to the sound of cockerels. Our legs felt like they’d pretty-much recovered though the soles of our feet were still a little sore and our shoes hadn’t completely dried out from yesterday’s drenching.

Our lovely hostess at Casa Arcadia made sure we were suitably fortified for another day of hiking with a typically huge Cuban breakfast and we made our way to the now familiar park entrance for the much more civilised start time of 8:30am. There was a shorter wait for the 4WD this time and a much smaller group too – just two others; an older couple from Germany and our guide Rogelio who we’d met on the hike down yesterday afternoon. 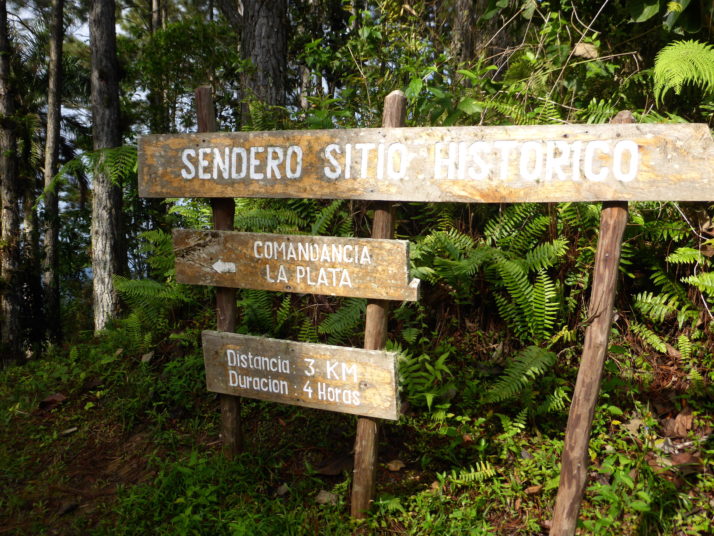 The start of the Comandancia de la Plata. 3km? After Pico Turquino that should be a doddle!

It’s a much easier hike than Pico Turquino, though the first few downhill steps were enough to remind our legs of yesterday’s soreness! We didn’t spot as much wildlife, and the route soon took us through an old farm. Today, the people who live here maintain the historic site rather than farm the land, but when Fidel and his Los Barbudos (‘the bearded ones’) regrouped and set up camp here, their support in food and silence was vital to the Revolution’s success. In return, the farmers received education and medical treatment. An old farm en-route to the Comandancia, now a base for maintenance workers

Just past the farm and up a short but steep section of trail we arrived at one of the checkpoints that encircle the Comandancia. These simple straw huts were used to control access to the camp. Of the few visitors, most weren’t allowed past them, their messages and supplies were relayed to keep the size and location of the actual campsite a secret. It worked too, Batista’s troops and reconnaissance aeroplanes never found it. Checkpoint #1 – this is as close to the camp as most people would get. Messages and supplies would be relayed from here

Just past the checkpoint, the forest and the sky opened up, welcoming us.. Just up the hill from the checkpoint. Incidentally, the hole in the foreground used to be a tree! It was taken down so Fidel’s helicopter could land when he visited on the 50th anniversary of the Revolution

The camp itself is pretty big, at its height it supported 300 troops and is spread out along both sides of the valley. The first building we came to was originally a meeting hall and hospital and is now a sort of visitor’s centre with maps, photos, copies of communications from Fidel and memorabilia such as a sewing machine and medical supplies. Julie did a fantastic job of translating the description of the camp as the centre’s attendant pointed out each building’s purpose in a model of the valley. Rogelio then took us deeper into the camp, further than any visitors would have gone as it was explained that if they were allowed through the checkpoint then they’d be met at the meeting hall, where they only had sight of one or two other buildings and so couldn’t gauge the camp’s size. A little further into the camp we passed a signpost that read ‘Radio Rebelde’ (Rebel Radio) which pointed to a nearby peak where the rebels would raise an antennae and broadcast propaganda for a few hours every night. 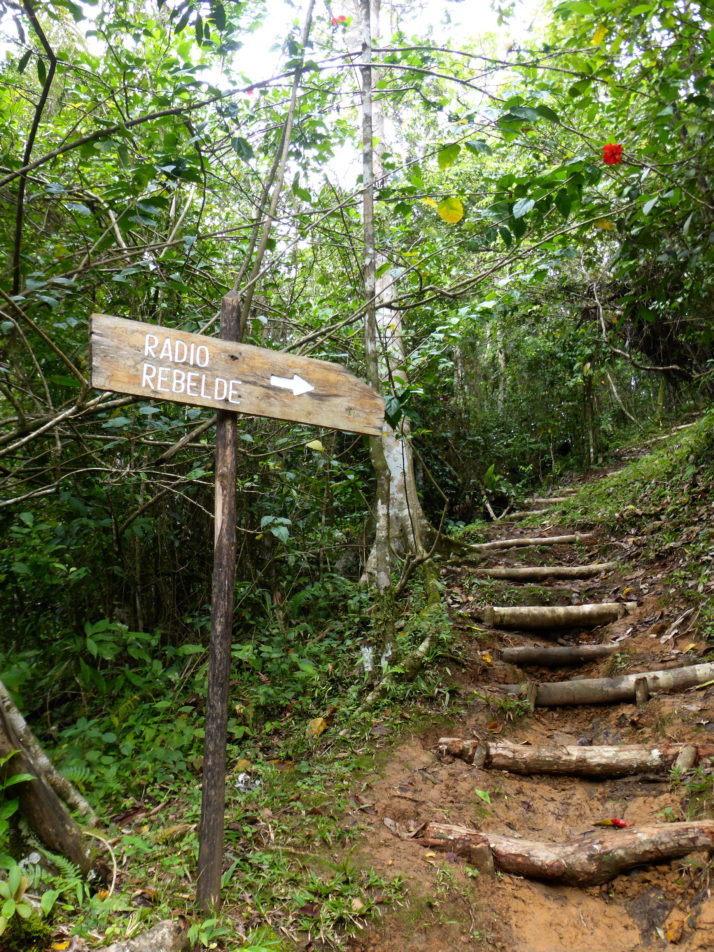 The path to the peak where the Rebel Radio was broadcast

The next buildings on the trail were the storehouse, ‘cocina’ or kitchen come dining hall, and then down a narrow path and round the back of a small hill we arrived at the highlight of the Comandancia – the very well hidden Casa Fidel. Fidel’s 3-room forest abode. Dropping in unannounced, there was always the risk he wouldn’t be in Inside Casa Fidel: the main or entrance room has a kerosene powered fridge which was used for medicines; the bedroom which doubles as an office with a writing desk

We’d read that there were 7 different exits or escape routes from Fidel’s house and it was fun walking round it to try and find them all. Fidel even had his own private outside toilet

Just past Casa Fidel was a 2-storey building used as a library and documents storage which was being re-constructed to the same design, simply because being made of wood it had deteriorated after 55 years. The 2 storey archive building was being restored

We continued around the small hill and came out back at the kitchen. From there our guide was quite keen to get us back to the starting point as soon as possible as he suspected it might rain again. We passed a couple of groups heading to the Comandancia on our way back along the trail, and no sooner had we jumped into the 4WD than it did indeed start chucking it down! We really enjoyed the entire Comandancia de la Plata. It’s a very different experience to the Pico Turquino hike as it’s nowhere near as physically challenging even though they’re in the same region and start from the same place. Although we only got to see inside 6 of the many buildings that make up the camp, the significance is not the buildings themselves, but that the Cuban Revolution was planned and orchestrated from these simple wooden huts.