Florence is only a 1.5 hour train ride north of Rome but it feels very different to the capital, or any other Italian city we’ve visited for that matter. It’s very chic with lots of designer shops and the souvenir of choice appears to be leather goods – shoes, jackets and bags. The narrow streets and old buildings remind me a lot of my hometown of York – not to mention that it is also dominated by a monumental cathedral, albeit very different in style from York Minster.

There’s a beautiful view over the city from Piazzale Michelangelo

The Cathedral of Santa Maria del Fiore (St Mary of the Flowers) is commonly known, as many cathedrals in Italy are, as the Duomo, the Dome. And you can see why. Construction of the church was begun in the 13th century but it was left incomplete with a big space at the end of the roof to accommodate a dome that they didn’t have the technology to build! In the early 15th century Filippo Brunelleschi stepped up to the task after studying the dome of the Pantheon in Rome. His design has been an influence for many others including Michelangelo’s dome on St Peter’s Basilica in the Vatican, and the Capitol in Washington DC. 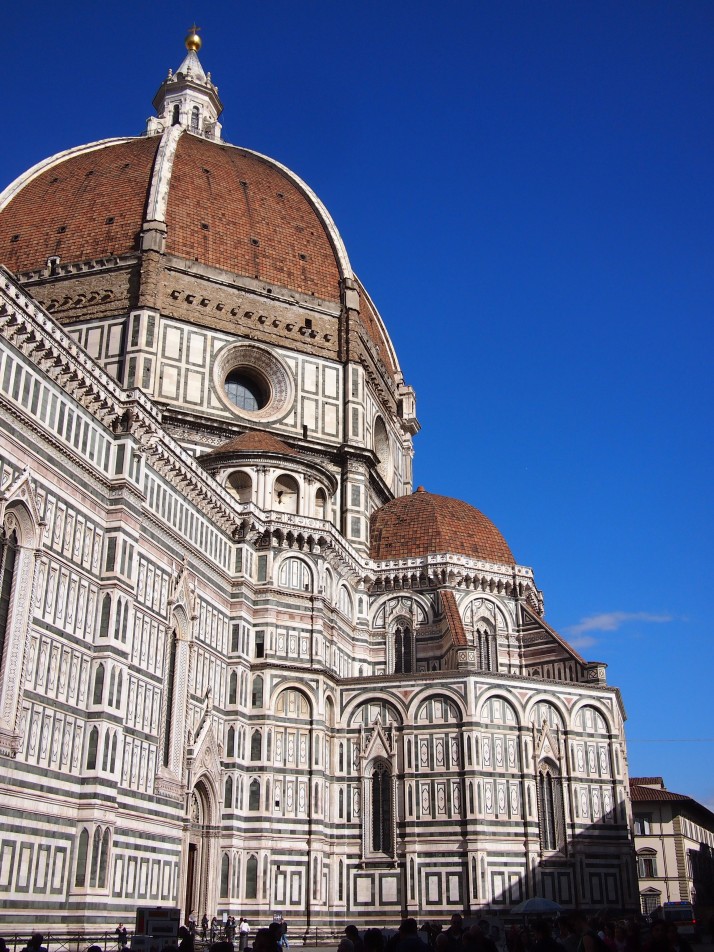 The magnificent orange dome above the green, pink and white marble-clad walls of the cathedral

Unfortunately the interior doesn’t live up to the glory of the exterior being for the most part a large, plainly decorated and empty space. Beside the cathedral stands the campanile, or bell tower, and opposite the main doors is the Baptistry, separate structures but in the same style as the main church so that they form a cohesive whole. We didn’t go into either of these but we spent some time admiring the relief scenes on the Baptistry’s bronze doors which are heralded as examples of early Renaissance art for their detail and perspective depth. 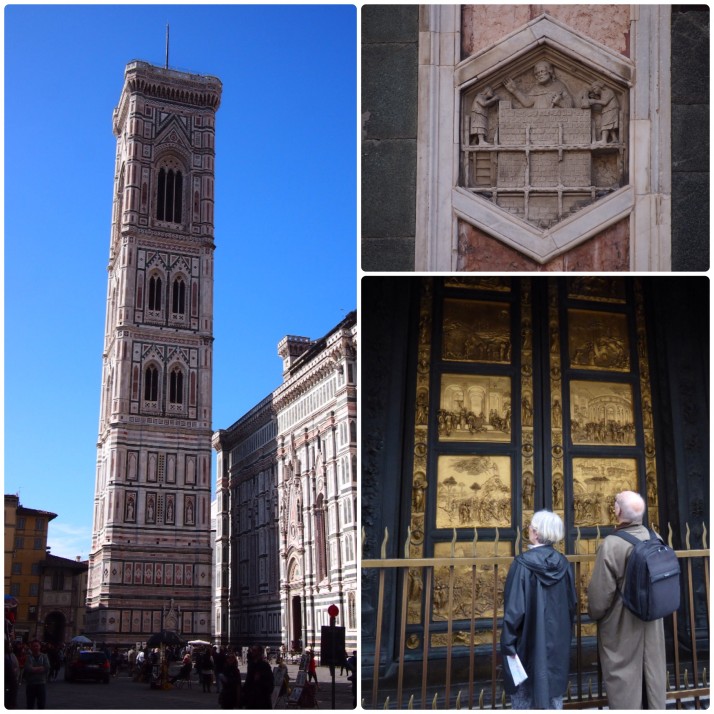 On our first afternoon we did a walking tour of some highlights of the historic centre. From the Duomo we walked down the old main street Via Calzaiuoli to the Church of Orsanmichele. The unusual square structure of the church with no tower or dome is due to the fact that it was once a grain market whose arches were filled in to create a church in the 14th century. The Church of Orsanmichele has two naves, I liked the right-hand side altar with its intricate tabernacle and painting of Madonna della Grazia

Evidence of the church’s former life are visible in the ceiling hooks which were used for pulleys and the former grain chutes in the wall columns which were used to move grain from the upper to lower floors. Around the church’s outer walls statues are displayed in niches, and upstairs is a museum with the originals of the statues, including one of ‘St Mark’ by Donatello. 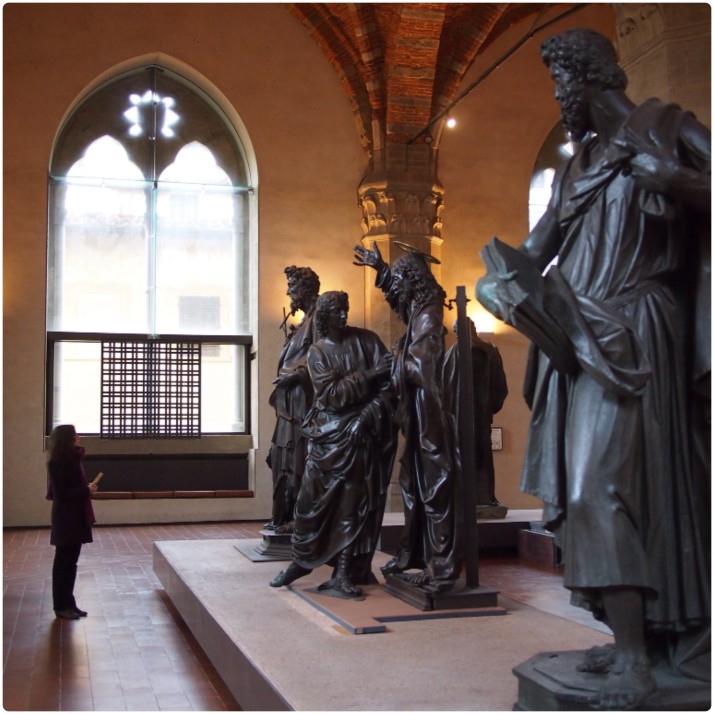 Admiring the original statues in the museum on the upper floor of the Church of Orsanmichele, open only on Mondays so we were lucky with our visit day

Just along the street from the Church of Orsanmichele is Piazza Signoria and the Palazzo Vecchio, Florence’s former city hall and later home to the super-rich Medici family who by funding vast quantities of art were responsible for kickstarting the Italian Renaissance. It’s possible to go into the entrance courtyard without paying for a ticket and we’d highly recommend it for a look at the ornate decoration. Beside Palazzo Vecchio is the famous Uffizi Gallery (which we didn’t visit having had a bit of an art overload just the week before in the Vatican Museums). We did however walk through its courtyard to the River Arno. Ponte Vecchio is the oldest of the bridges over the river dating to 1345. Its buildings were originally occupied by butchers and tanners who emptied their waste directly into the river but nowadays they contain the very fancy shops of goldsmiths and jewellers. 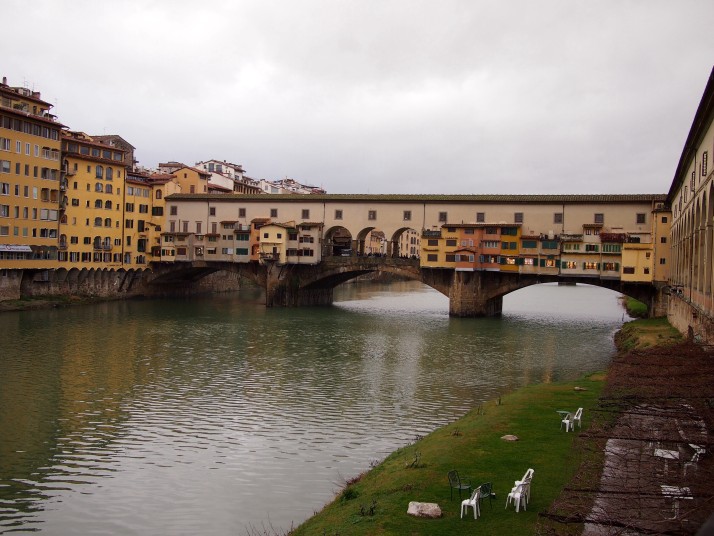 On our second day in Florence we were able to fulfil a hankering that we’ve had since our arrival in Sicily – to finally sit in, and even drive, one of the classic Fiat 500s, or Cinquecentos in Italian. As no one else had booked for the Classic Tour on that day we got a private tour with our guide Niccolo in the lead car, Giacomo, followed by us in bright blue, 54 year old Fernando. Of course the cars have names, how else would you be able to encourage them up the hills? 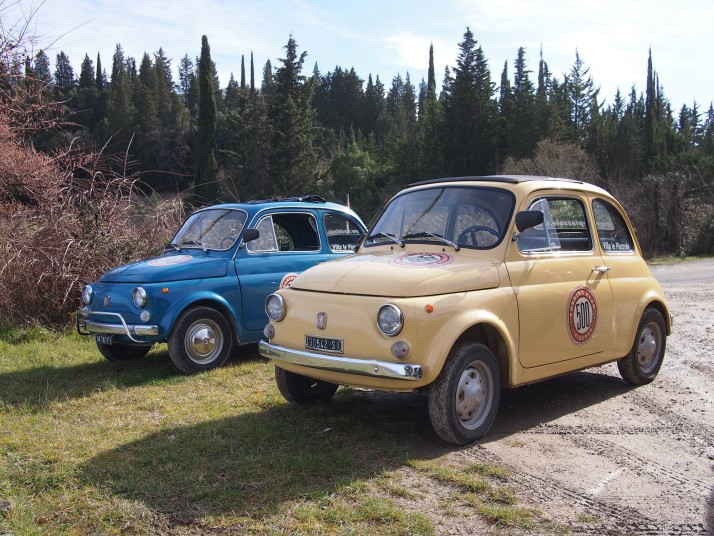 Before we set off Niccolo showed us Fernando’s controls as well as giving us a lesson on the horn – one toot is angry, two to say hi, three or more if you wish to show your appreciation as you pass a beautiful lady – yep, this is Italy… We took turns at the driving and soon got used to the double clutch gear changes as we zipped (OK, trundled) through the beautiful Tuscan countryside surrounded on all sides by olive trees and vineyards which produce the famous Chianti wines. 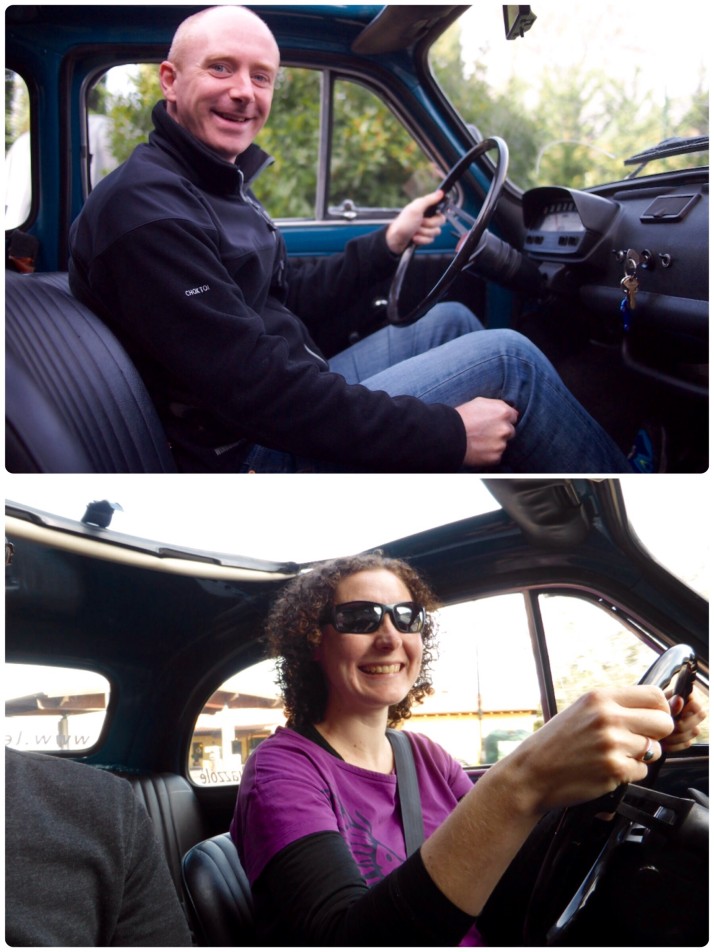 Driving Fernando, our trusty Cinquecento, for the morning 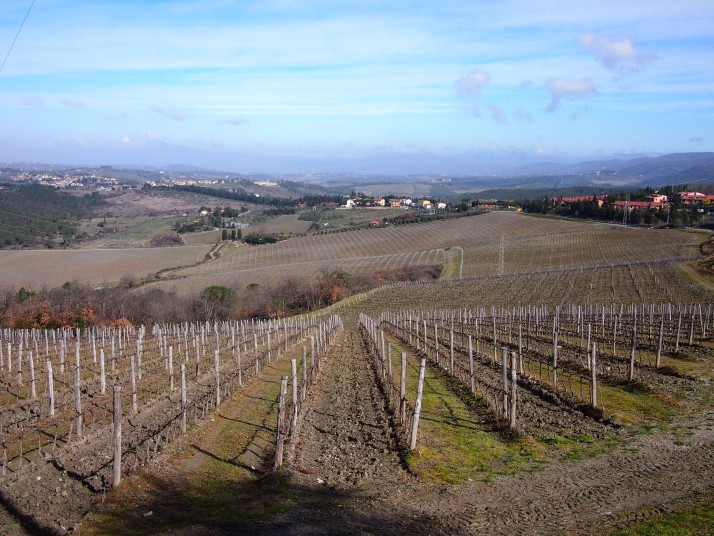 The Tuscan countryside is dominated by vineyards

It was a lot of fun even if the brakes were quite terrifying – if you’re going downhill, even standing on the brake doesn’t seem to have much effect! That evening we had a very enjoyable dinner with our host Francesco and a couple of his friends. However, sitting down at the very Italian hour of 10pm resulted in our going to bed at 1am and wasn’t conducive to getting up for morning sightseeing. By the time we ventured out it was almost lunchtime so we went to the covered Central Market for a traditional Florentine sandwich of lampredotto, or tripe, specifically the cow’s fourth stomach… Somehow we seem to be eating more adventurously in Europe than we did in Asia. Not sure how that’s come about, but anyway with the parsley sauce and the top half of the bread bun dipped in the cooking broth the lampredotto was quite tasty. 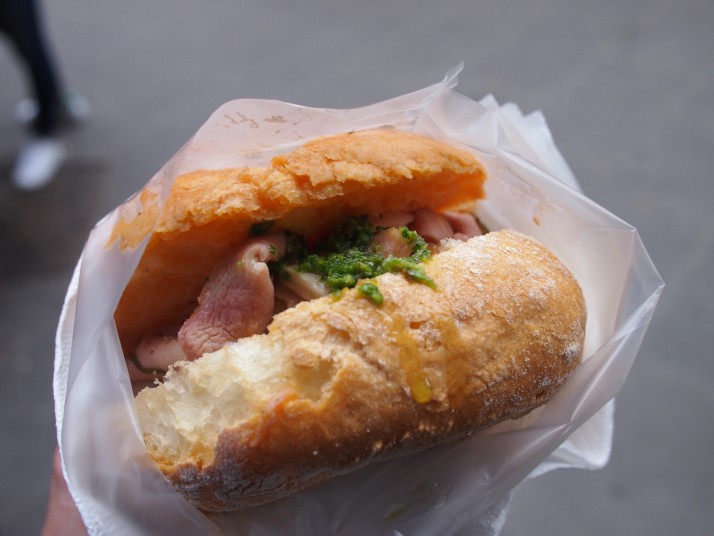 Afterwards we wandered through the aisles of the market hall enjoying the butchers, fishmongers and mounds of sun-dried tomatoes and fragrant porcini mushrooms. On the second floor under the roof were lots of quality looking eateries and a cookery school with a glass wall where we watched the students at work. Central Market (clockwise from top left): the market is housed in this impressive two floor building; lettuces; Florentine butcher; rays for sale at a fishmonger

As the stalls began to pack up for the afternoon we made our way to the Accademia Gallery. There’s really only one reason to visit this small art gallery, the statue of ‘David’ by Michelangelo. We’d already seen a couple of replicas of the famous statue, one outside Palazzo Vecchio and a bronze cast at the viewpoint of Piazzale Michelangelo, but we still wanted to see the original. Versions of ‘David’ outside Palazzo Vecchio and at Piazzale Michelangelo

The other rooms of this former convent contain various pieces of religious art, as well as a small museum of musical instruments, and then we rounded the corner to a sight we’d seen many times in pictures, the gallery leading to ‘David’. The gallery leading to the room containing ‘David’

Lining the sides of this gallery are some unfinished pieces by Michelangelo which are interesting as an insight into how he worked. Unlike most sculptors who make a plaster version first so that they can measure up the points on the marble, Michelangelo worked directly on the marble block from front to back believing that God guided him to reveal the figure which was already contained within. 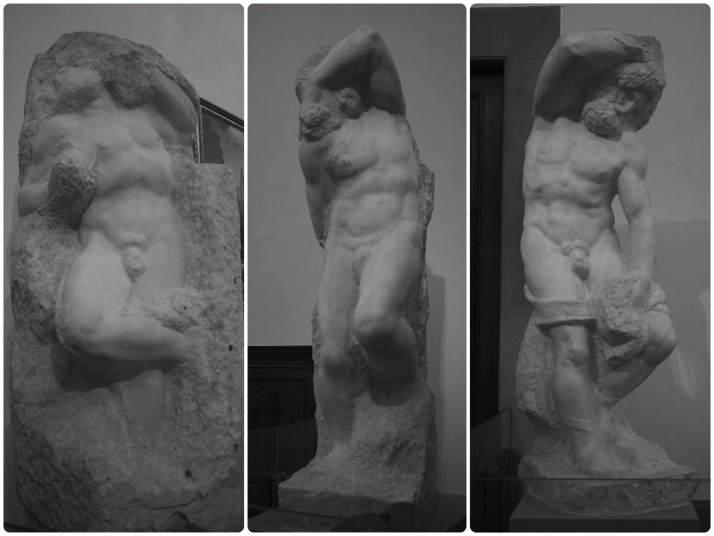 Michelangelo’s most famous sculpture depicts the biblical hero David as he prepares to fight the giant Goliath. It’s much bigger than I expected, standing 4.34m high, and dominates the room containing it. 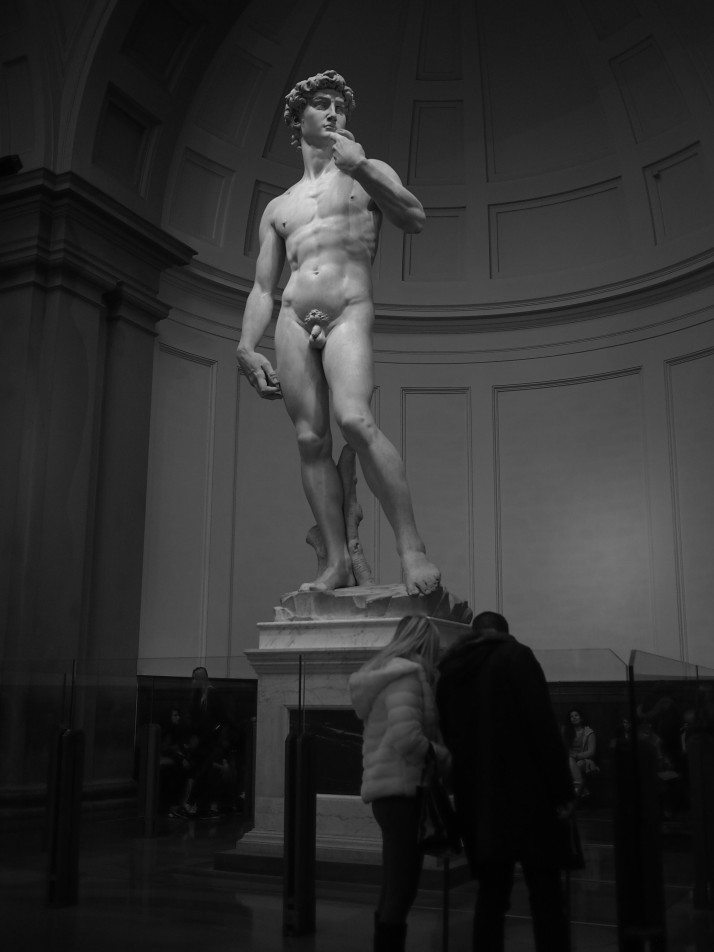 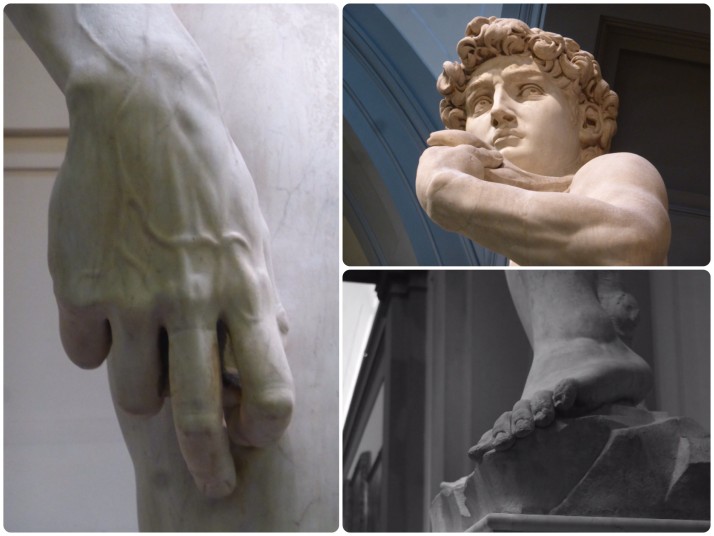 ‘David’ details (clockwise from left): the realistically bulging veins of his right hand; David gazes off into the distance; in 1991 a visitor attacked the statue with a hammer damaging the toes of the left foot

We were surprised by how much there is to do in Florence considering its small size. We’d definitely consider a second visit if only to have another plate of the local specialty T-bone steak which we had for dinner right before we caught the train further north…