We read quite a few travel blogs and have noticed recently that other travellers take food tours to get to know the cuisine of a new place – for example here and here. This sounded like a great idea to us and so before we arrived in Vietnam we did some research and found that the Hanoi Cooking Centre runs a half day Street Eats and Market Tour which sounded like just what we were after. 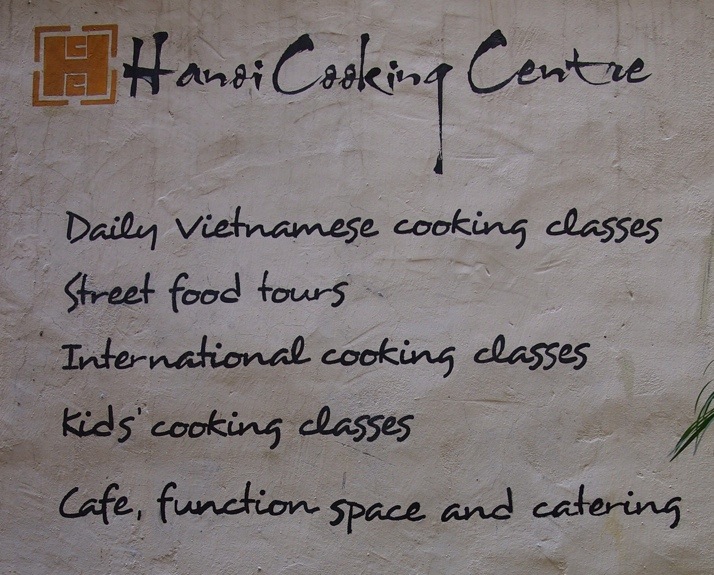 We were told to arrive at 9am with an appetite when we would meet our guide and the rest of the group. Our guide, Huế, is head chef at the Cooking Centre and was knowledgeable and enthusiastic about Vietnamese food. The rest of our group consisted of an Australian mother with her teenage son and a German/Canadian couple who live in China and their two young children (aged about 2 and 4).

First stop was just across the road for the classic Vietnamese dish of noodle soup, phờ. Andrew went for the beef and I decided on chicken. Huế told us that the beef stock was prepared by first soaking the beef in cold water for 2 hours and then cooking it really slowly, usually overnight, to extract the full flavour from the meat and bones. The chicken stock doesn’t take quite as long but neither is allowed to boil to ensure the soup is translucent.

With the phờ we had green tea prepared from fresh leaves. 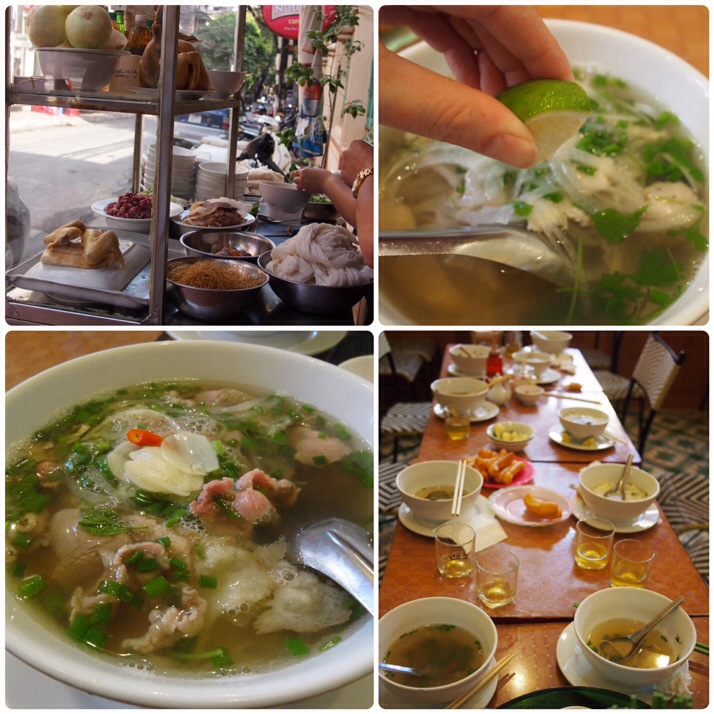 Phờ (clockwise from top left): preparation area, squeezing lime into the chicken phờ, not much leftover, beef phờ topped with garlic and chillis

To give us a bit of a breather before the next course, Huế took us to the local market to see the different foods on offer. Similarly to the markets that we saw in China and Hong Kong, everything was very fresh with live fish and lots of crisp greens. 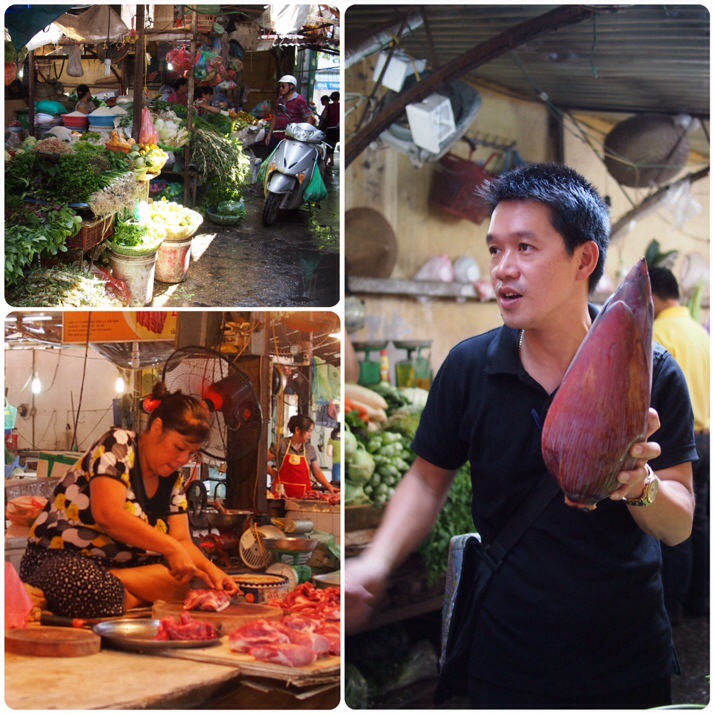 Shopping from the back of your scooter is common practice in Hanoi, Huế showing us a banana flower which is made into a tasty Vietnamese salad, This butcher worked cross-legged from her block!

After a brief taxi ride to Hanoi’s Old Quarter we arrived at a traditional rice pancake roll restaurant. The pancakes are made from rice flour, are as thin as French crêpes and are cooked with steam rather than the frying that we’re used to. We tried two types filled with chicken and pork, both were sprinkled with dried fried shallots and were very tasty. Huế left us to munch through the pancakes before reappearing with a saucer and what looked a dead cockroach, oh dear it looked like we were going to be thrown into the deep end of Asian cuisine… He explained that it was a kind of water bug and asked who wanted to try it. None of us looked keen, but peer pressure might have pushed us into it if he hadn’t offered an alternative – the bug is squeezed into a sort of essence which we could add to our dipping sauce to try. It tasted surprisingly like a strong almond essence, I’m not sure that it necessarily enhanced the pancakes, but it wasn’t unpleasant either. 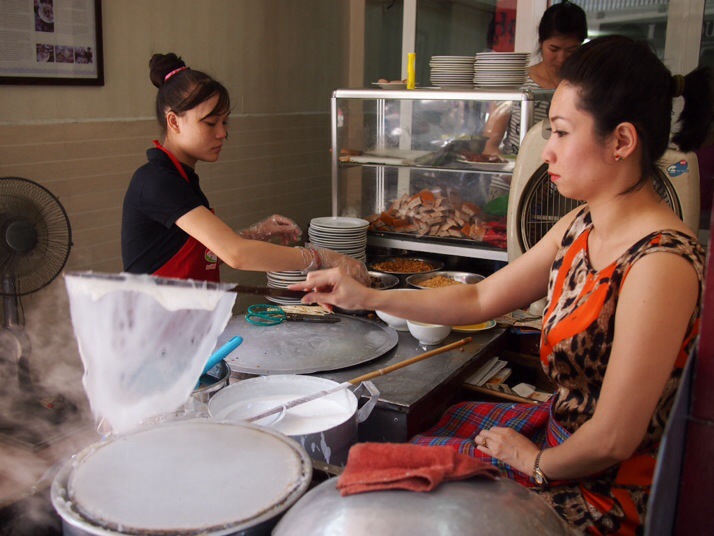 The rice pancake chef was rather glamorous Hovering tentatively over the dipping sauce with added insect…

I missed Huế’s explanation of the green rice which we bought from a street vendor, but according to vietworldkitchen.com

I did however hear that it’s seasonal and so we were only able to try it as it is autumn. 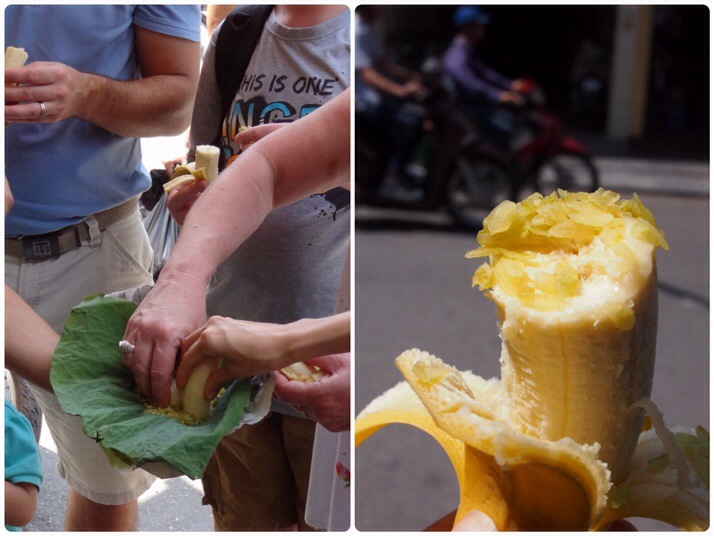 Green rice with banana, we found the flavour reminiscent of dried fruit

A definite highlight of the day, these prawn cakes are made from a sweet potato batter and whole prawns. Originally the prawns came from West Lake in Hanoi city hence the name, but the waters are no longer as clean as they were and the shellfish is now sourced elsewhere. They are fried in three pans of oil of varying temperatures to ensure their crispness and non greasy texture. The dipping sauce was made from fish sauce, lime juice, green papaya, carrot and …. Huế told us that Vietnamese eat the prawns with heads, shells and all (it’s good calcium for their dairy-light diets) so we tried them that way and found that it just added extra crunch!

We expressed our liking for these early on and, as everyone else was slowing down as they filled up, Huế force fed us the last of them (arms twisted behind our backs obviously…) by dropping them into our dip bowls. I know, it’s a hard life… 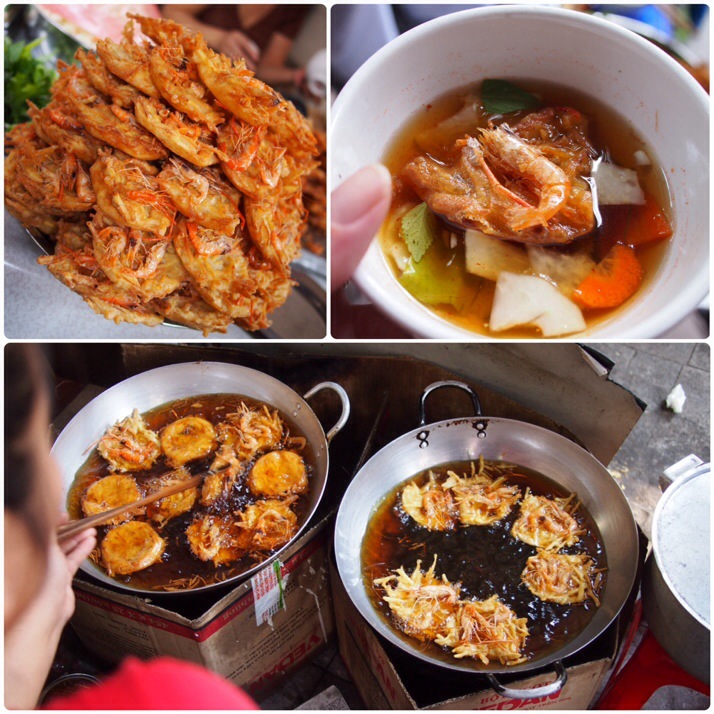 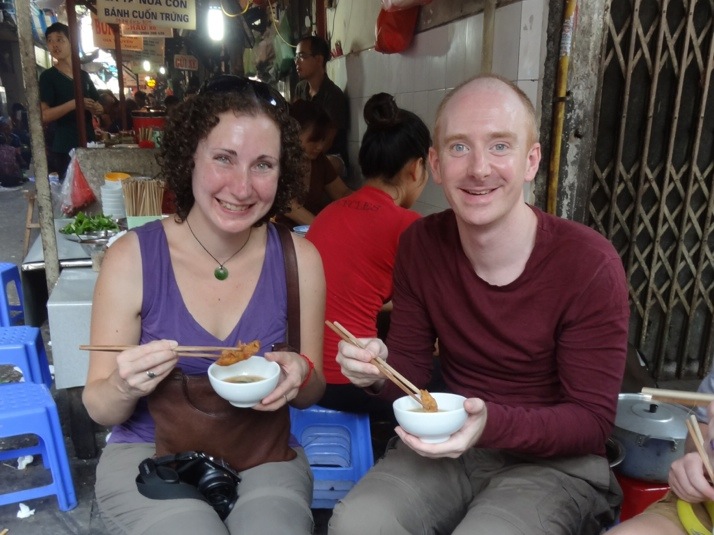 Us enjoying the prawn cakes

The next street restaurant on the itinerary sold bún chả. Bún refers to the noodles, long, thin rice vermicelli, and chả is the barbecued meat served with it. The noodles come cold (and handily pre-chopped with scissors) and the meat is slices of pork belly and little patties of pork meat served in the ever present dipping sauce. The stand we ate at cooked the meat on bamboo skewers giving it a lovely smoky flavour. 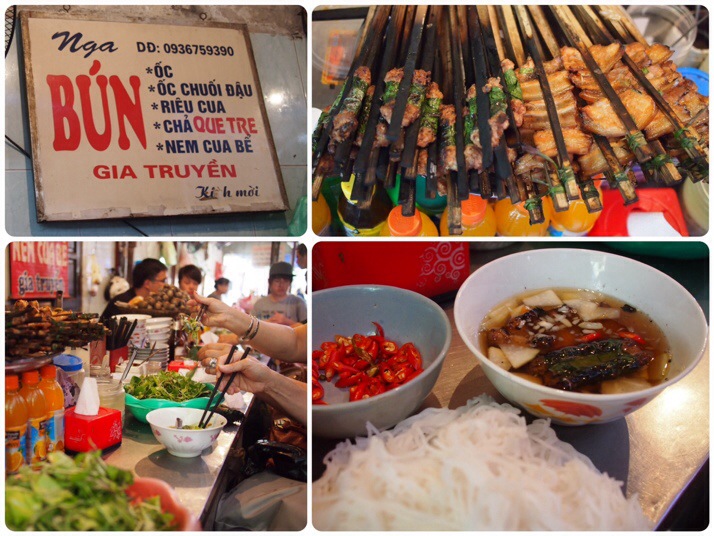 After all that it was time to see whether we had room for pudding. Ché is a traditional Vietnamese dessert made from a mixture of beans, jelly, tapioca, corn and fruit topped with coconut milk or condensed milk. The stalls are a bright display of the different ingredients and despite the unlikely sounding combination we found the ché to be tasty and sweet enough to give us a sugar rush! 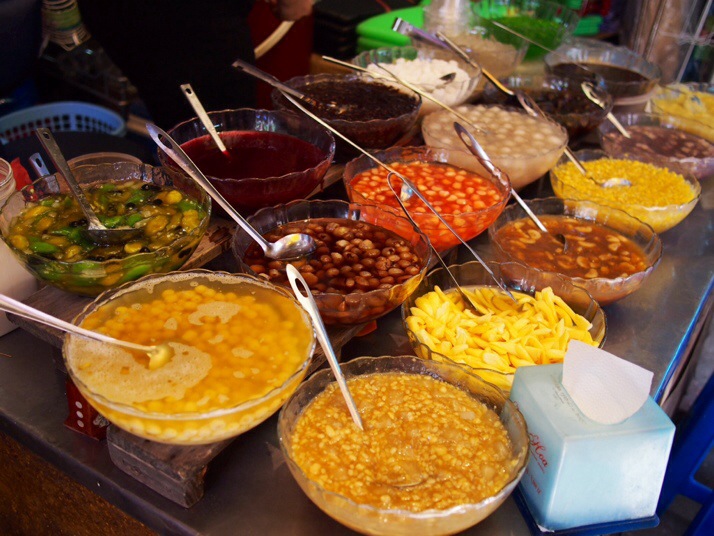 We had understood that the tour would end with dessert so when Huế called a taxi after we’d finished our ché our stomachs groaned. Fortunately we were now entering the liquid part of the tour and as everyone knows there’s always room for beer! The taxi took us to a traditional Bia Hoi bar, common throughout the city and usually with small plastic tables and tiny stools occupying the pavement outside. The beer is ‘fresh’ and served straight from the keg into glasses which are roughly half a pint. It’s only about 3% alcohol so it’s light and easy to drink on a hot day. 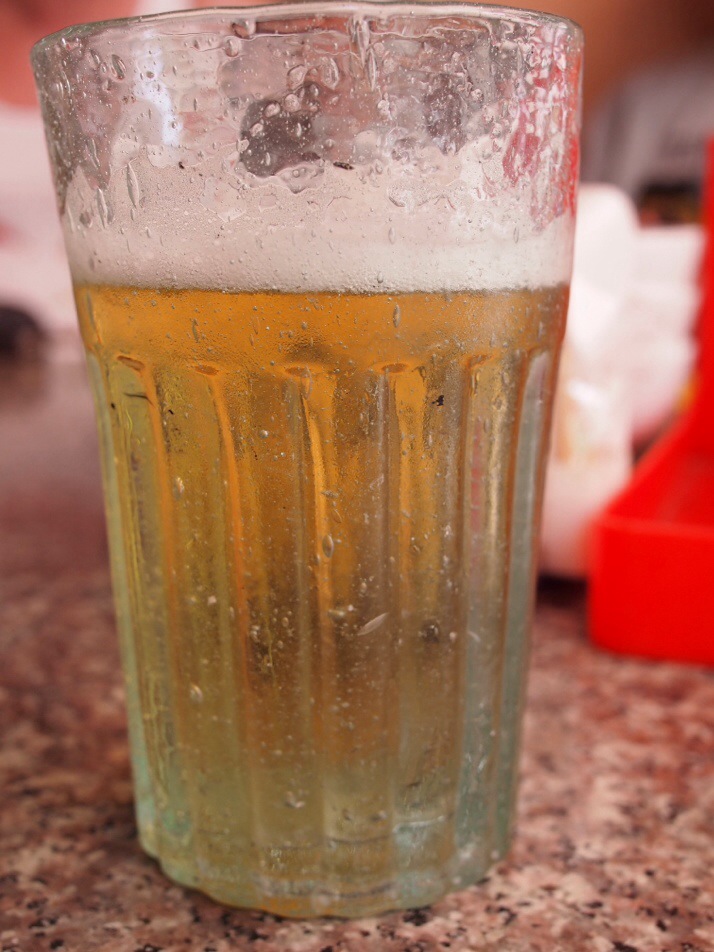 I thought that my photo wasn’t straight until I realised that the glass leaned to one side! Typically the glasses used in Bia Hoi bars are made from this slightly green, bubbly glass

The last stop on our route was a traditional coffee house. Vietnamese coffee is strong and usually served with condensed milk which means that it’s also sweet. The stuff served by our guesthouse for breakfast is not really to my taste but the blend at 80 year old Cà Phê Duy Trí was much smoother and the condensed milk had been frothed to create something akin to the latte art that is often seen in fancy coffee shops at home. 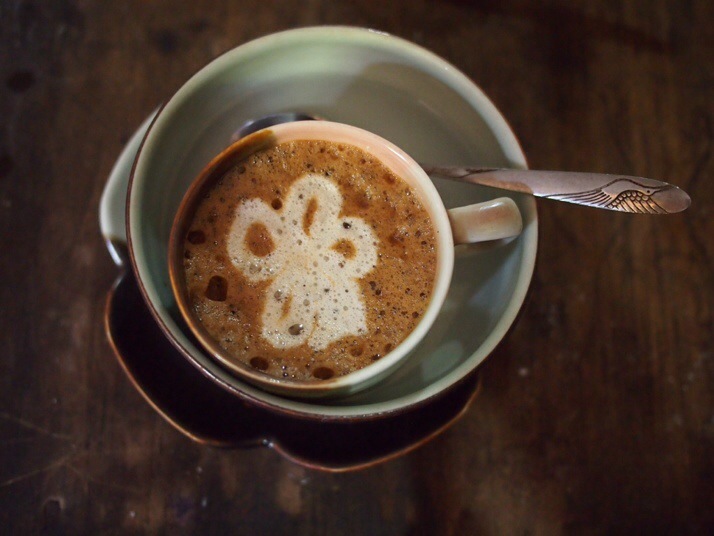