When staying anywhere we like to use our own two feet to get around – it’s cheaper, we get to see more of the town or city, and the exercise does us good! However, staying in a big city means that sometimes walking just isn’t feasible or we’d be walking all day and not seeing the sight that we want to see. Moscow and St Petersburg are Russia’s two largest cities and so we’ve had to get to grips with their underground rail systems (buses and trams are usually trickier as maps of routes are not so readily available and stops not so well signed). Fortunately both cities have networks that are cheap and pretty straightforward to use.

The metro in St Petersburg is the deepest in the world (by average depth of its stations). The deepest station is Admiralteyskaya at 105m below ground. The escalators down to the platforms are ridiculously long (about 3 minutes by our reckoning). We kept trying to get a photo to show them, but it’s really tricky to get a good perspective. It’s just 28 roubles (about £0.55) for any journey. For that you get a token, something like a fairground ride token, which is fed into the station entrance to let you through the turnstile, you are then free to exit whenever, and from any station. Although stations are fairly far apart, the five lines reach most corners of the city and trains run every 2-3 minutes during the day from one end of the line to the other. 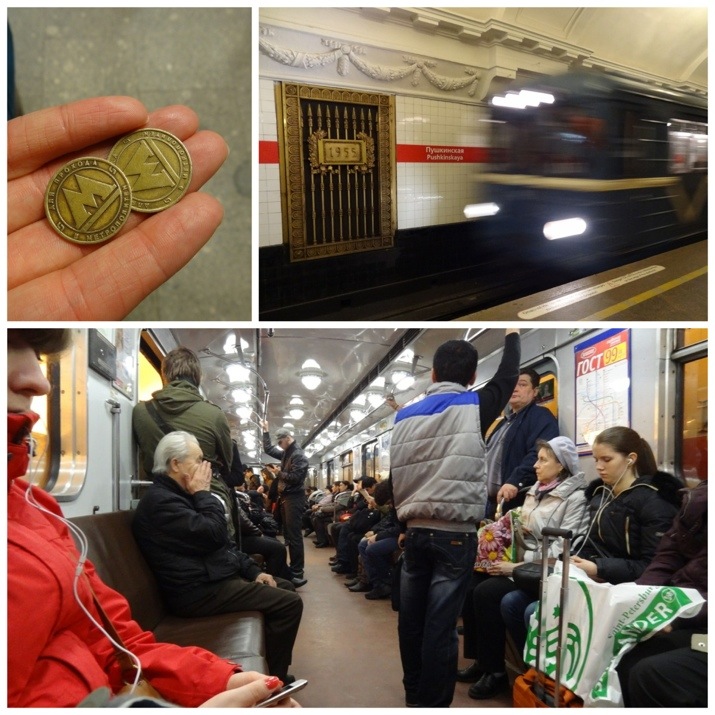 St Petersburg metro: Metro tokens, train arriving at the platform, inside the carriage 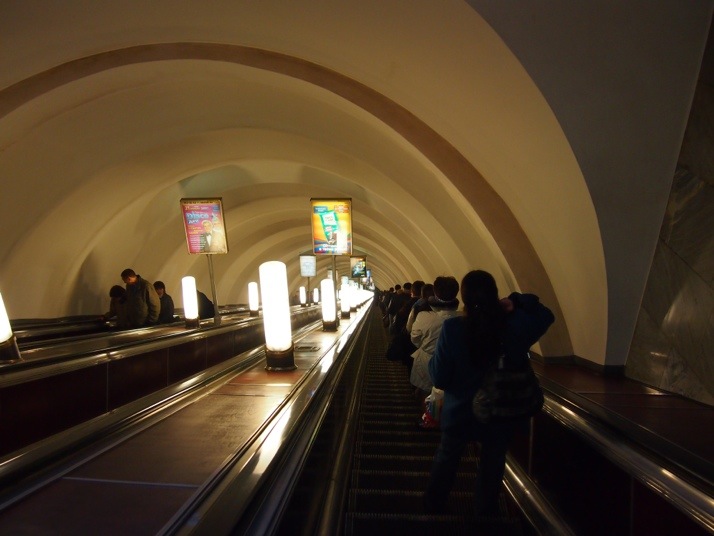 It’s a long way down!

The Moscow metro system runs in a similar way to St Petersburg but uses magnetic cards rather than coin tokens. You can buy cards valid for one trip (30 roubles, approx £0.60) or more with prices getting cheaper as you buy more (e.g. 300 roubles for 11 trips works out at approx 27 roubles or £0.55 per trip). It is a larger network with 12 lines and almost 200 stations and we found it a little more confusing to begin with, especially the signs which direct you how to transfer between the different lines within the connecting stations. It’s also been a test of our Russian reading skills as, for the most part, there are no signs (and certainly no announcements) in English. Having a metro map with the stations named in Russian and English has been invaluable and we’ve found that the best way to work out when to get off is to count how many stops we need and then keep track while we’re on the train although this did backfire on us once and we ended up overshooting by a station so we had to swap to the other platform and get the next train back! Moscow’s metro is the 4th busiest in the world (after Tokyo, Seoul and Beijing) and we really got a feel for that when travelling at rush hour. 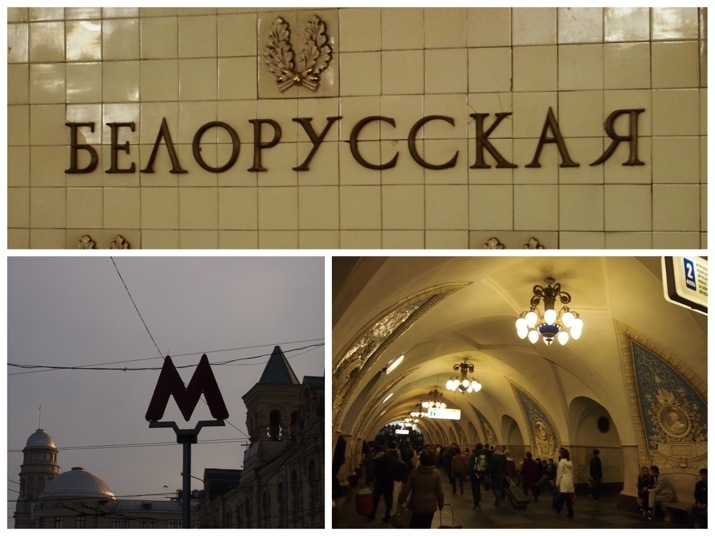 Some of the stations in St Petersburg are quite impressive with chandeliers and mosaics, and Avtovo’s glass faced columns were the real stand-out, but you can think of them as a warm-up act for the Moscow stations. Stalin ordered that the metro stations should be designed to glorify the the Soviet system and awe the people. We spent a few hours one afternoon hopping from station to station and admiring the designs (all for the price of one trip – good value sightseeing!). 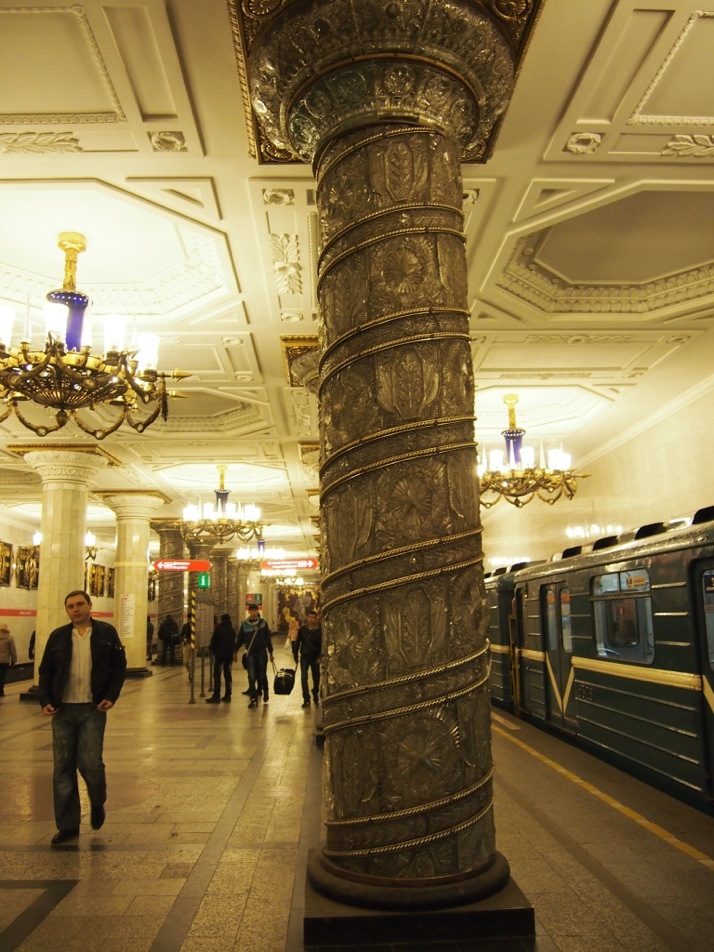 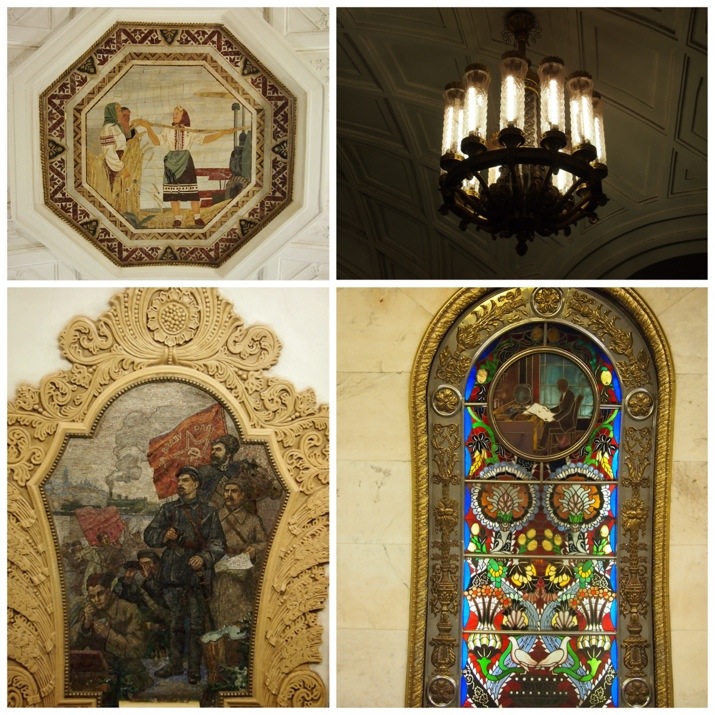 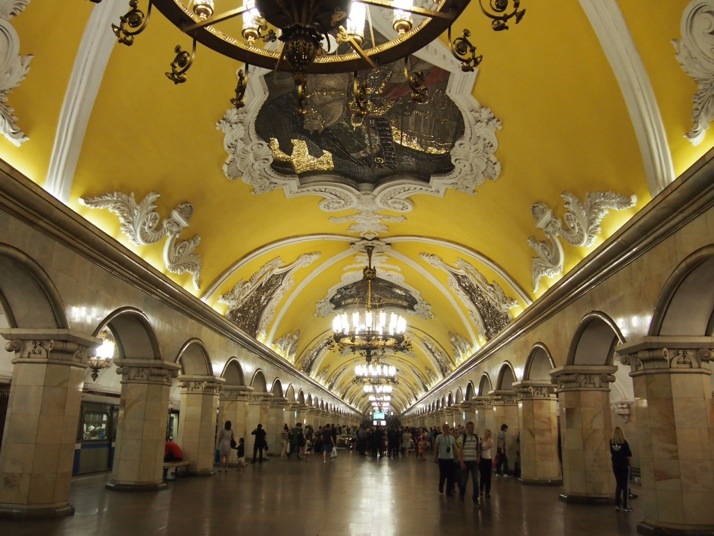 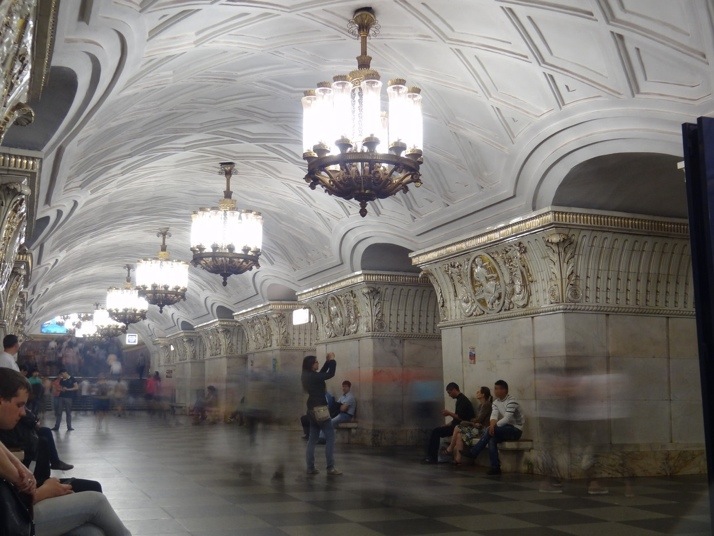 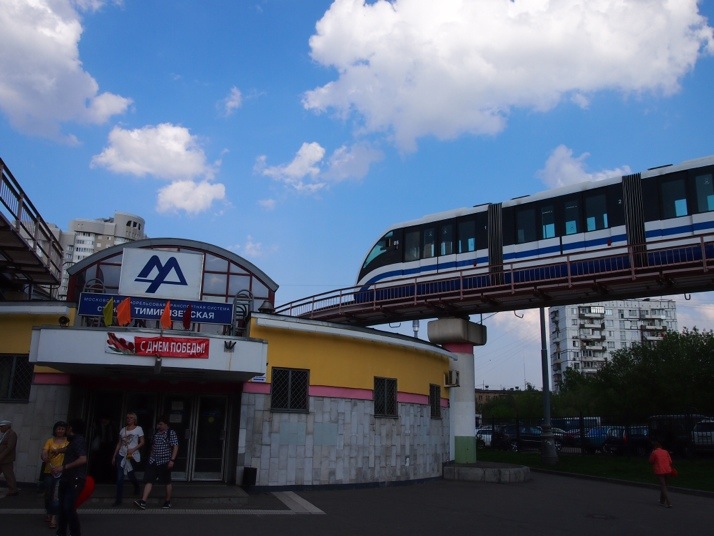 4 thoughts on “Travelling Underground in Russia”