We really enjoyed the first ‘stroll’ that we did in Istanbul so for our second one we chose to head a little off Istanbul’s beaten tourist path towards the Şehzadebaşı district. We again began at the Galata Bridge but, rather than walking towards the tour group crowded square in front of the Haghia Sophia, this walk went in the opposite direction to areas where people live and go about their daily business without thinking about tourists. 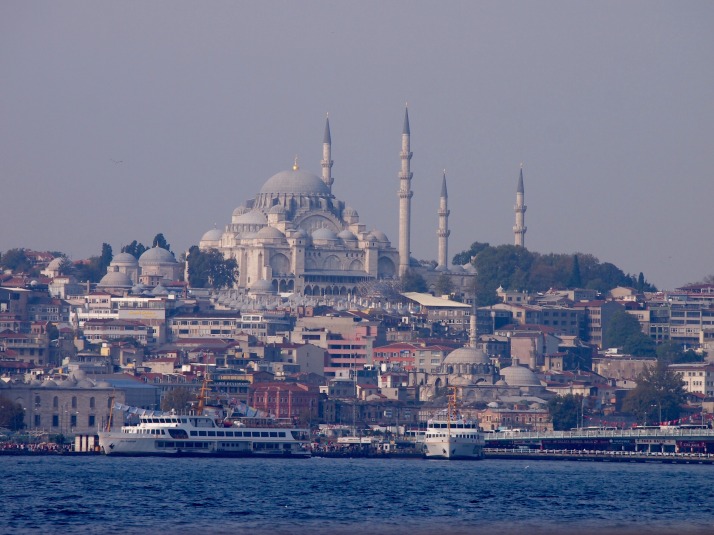 Süleymaniye Mosque from the ferry arriving at Eminönü, this would end up being our destination for the day

Although it doesn’t incorporate any “big sights” this walk gave us a real appreciation for how steeped in history Istanbul is. It took us past many small mosques and other buildings, many over 500 years old, tucked away in commercial and residential areas and still in use today. 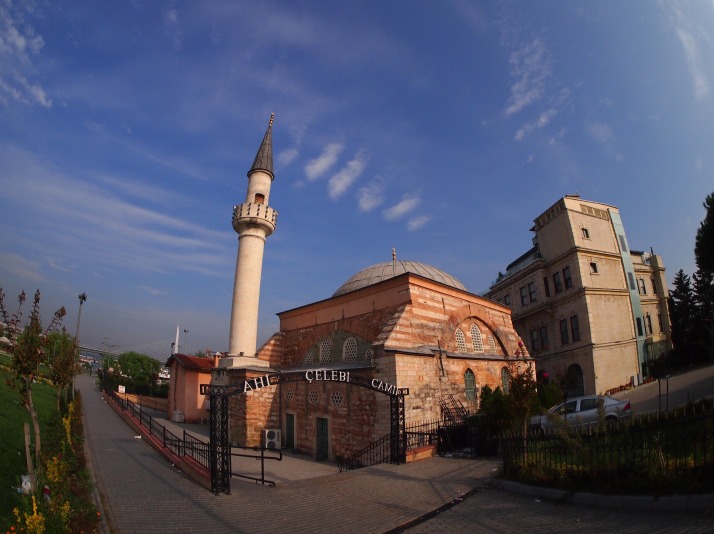 Church of the Pantocrator

Probably the most impressive sight on this stroll is the former Church of the Pantocrator. Unfortunately for us it is undergoing what appears to be extensive restoration so we weren’t able to explore it fully. It was built between 1120-36 during the Byzantine (Roman) period when Istanbul was called Constantinople (there’s a song in there somewhere…) and is actually two churches joined by a chapel. Due to the builders’ fencing we could only really get a good look at the southern church which, as with many of the Byzantine churches, was converted to a mosque when the Ottomans took the city in the 15th century. 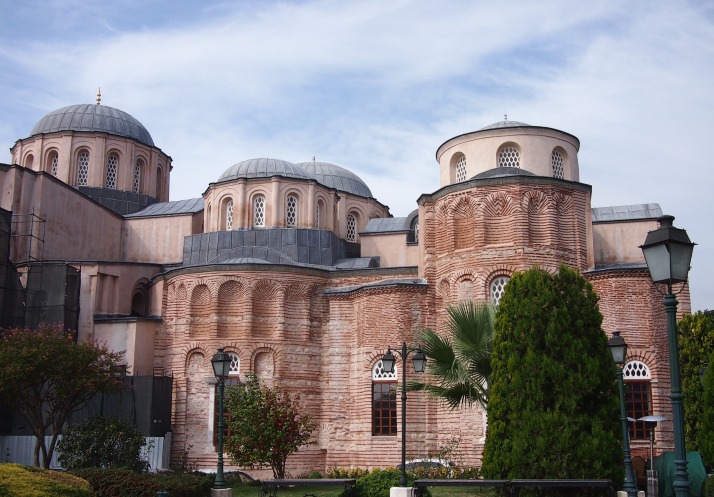 Church of the Pantocrator from the south

It isn’t currently open to the public but we managed to sneak in along with some people who had an appointment with the imam! Inside it was strange to see the mihrab not in the centre of the wall opposite the door (as it is in purpose built mosques) but set off to an angle on one side. This is because the Byzantine churches were oriented to the east but mosques in Istanbul face towards the south-east, the direction of Mecca. 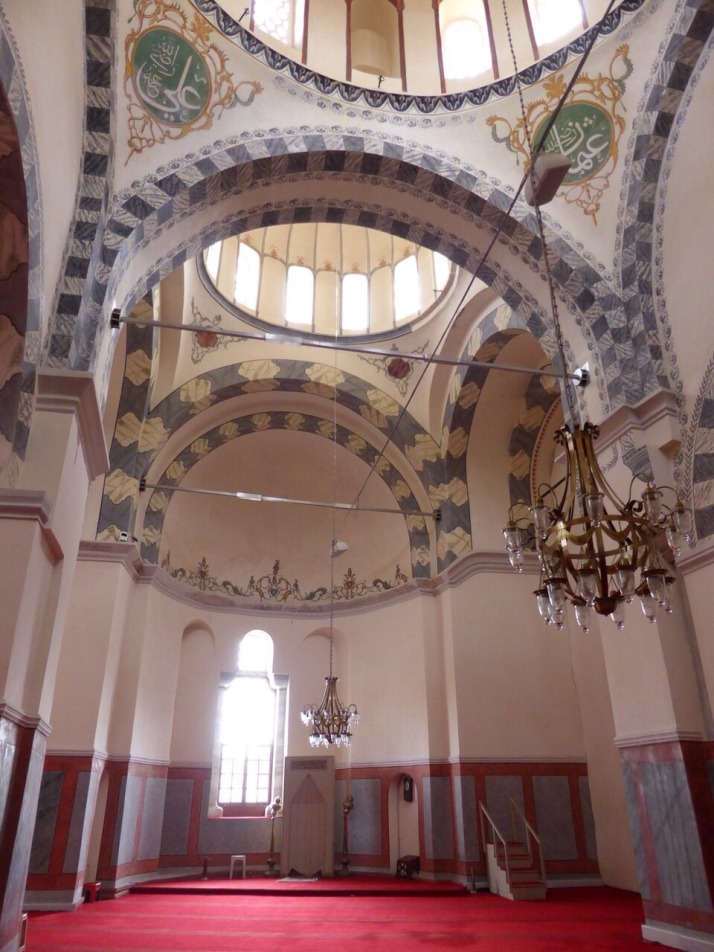 Interior of the Church of the Pantocrator, now called Zayrek Mosque. The mihrab can be seen just to the right of the window in the front left corner of the building

Trying to find the next sight on the itinerary, we were hailed by a man working in a bakery. We said hello and carried on our way but quickly discovered the Şeyh Süleyman Mescidi covered in scaffolding (the authorities here are really in restoration mode) so we retraced our steps for a bite of lunch. We were the only customers eating in but there was a steady flow of takeaway business and as the friendly waiter took our order (part guesswork on our part and part his recommendation) we settled back to watch it being made and baked in the wood fired oven behind the counter. It doesn’t take a genius to work out that local style food from a busy shop, freshly prepared and still hot from the oven was absolutely fantastic! 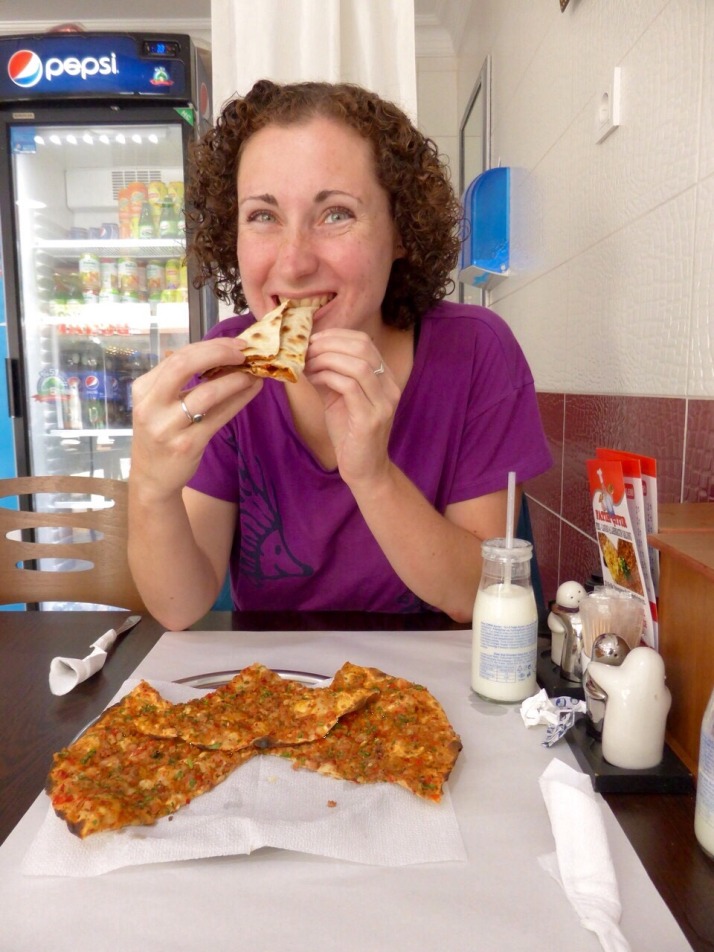 Tucking into lahmacun for lunch at Fatih Çitir restaurant

Having slightly over-ordered (and hence overeaten) we shambled into the back streets beyond the shop to search out yet more historic mosques. This felt even more off the beaten path. We found locals gossiping on the streets, old men drinking tea and reading newspapers, and kids running up and down with cap guns more than once scaring us with a nearby bang. We got a little lost but eventually managed to reorient ourselves and carry on with the stroll. 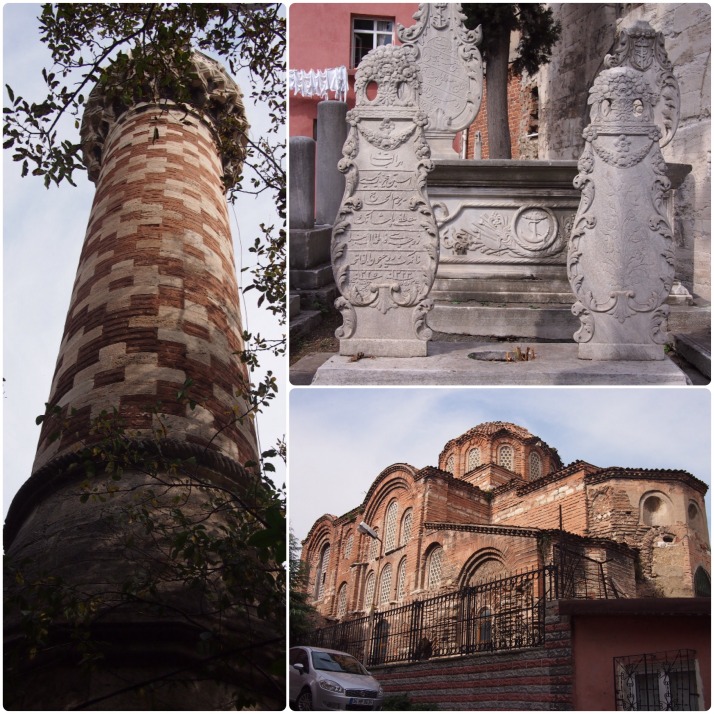 Şehzadebaşı mosques (Clockwise from left): the prettily patterned minaret of Haci Hasan Mescidi; gravestones in the grounds of Aşık Paşa Camii; Eski Imaret Camii, another converted Byzantine church, this one was the Church of St Saviour Pantepoptes

Retracing our steps back past the Church of the Pantocrator we turned, as instructed, down Itfaiye Street where we were expecting to find a hamam, built by Istanbul’s most famous Ottoman architect, Sinan, and recently reopened. We suspect that this was the building completely covered in scaffolding (yet more restoration) but we were too distracted by the pens full of sheep and goats to investigate more closely. It looked more like a livestock market than a butcher’s shop but, as we watched, sheep were sold and then hustled over to the shops across the way where they were slaughtered and butchered. It reminded us of the goat slaughter we witnessed in Mongolia. 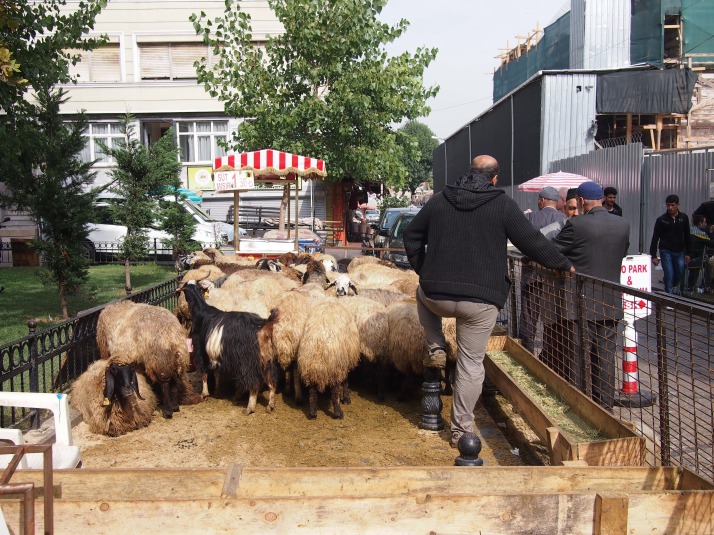 Sheep for sale in Itfaiye Street

We later found out that it was a national holiday when traditionally each family sacrifices an animal and so this market is likely not a permanent fixture. One enterprising seller engaged Andrew in conversation, trying to sell him a sheep and reassuring him that it would be butchered for him to take away! Granted, we do have a kitchen in our apartment here, but I’m not sure we have the equipment or appetite to deal with quite so much mutton…

Having escaped without a carcass we made our way to the end of the street where we found the hugely impressive Aqueduct of Valens. This structure was built around AD 375 as part of a system to bring water into the city. Incredibly 900m of the original one kilometre length remains. It seems to pass right through local life unnoticed, crossing a busy road, sheltering teashops and bordering a public park. Locals drinking tea under the Aqueduct of Valens

Apart from the archaeological remains of another ancient church, this was the end of the stroll. As we had a couple of hours of the afternoon left we decided to head up one of Istanbul’s many hills to visit the Süleymaniye Mosque.

This mosque was commissioned by, and is named after, Süleyman the Magnificent, Ottoman Sultan from 1520-66. Its architect was Mimar Sinan, regarded as the greatest of the Ottoman architects. This is the largest building that he constructed and our guidebook assures us that the Süleymaniye Mosque is “by far the finest and most magnificent of the imperial mosque complexes in the city”. 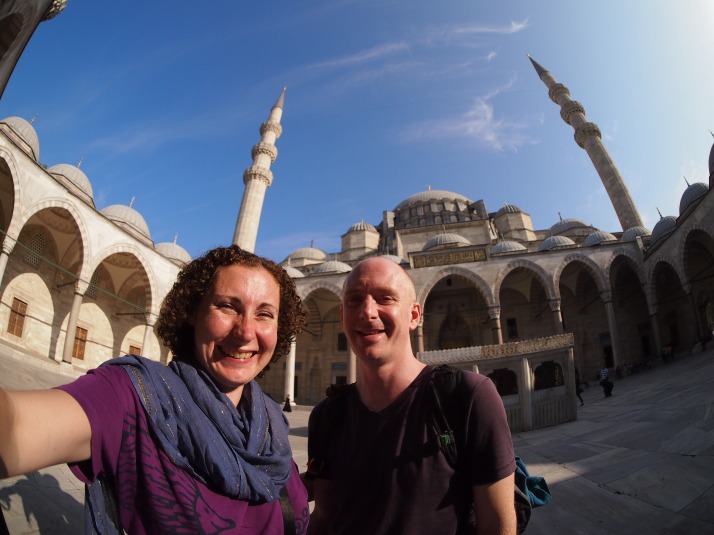 Us in the courtyard of the Süleymaniye Mosque

The exterior is extremely beautiful, both in general form with its multitude of domes and the four tall and graceful minarets, but also in the details. We especially liked the arches made up of alternating marble stripes, but everywhere there was intricate stone carving and attention to detail. 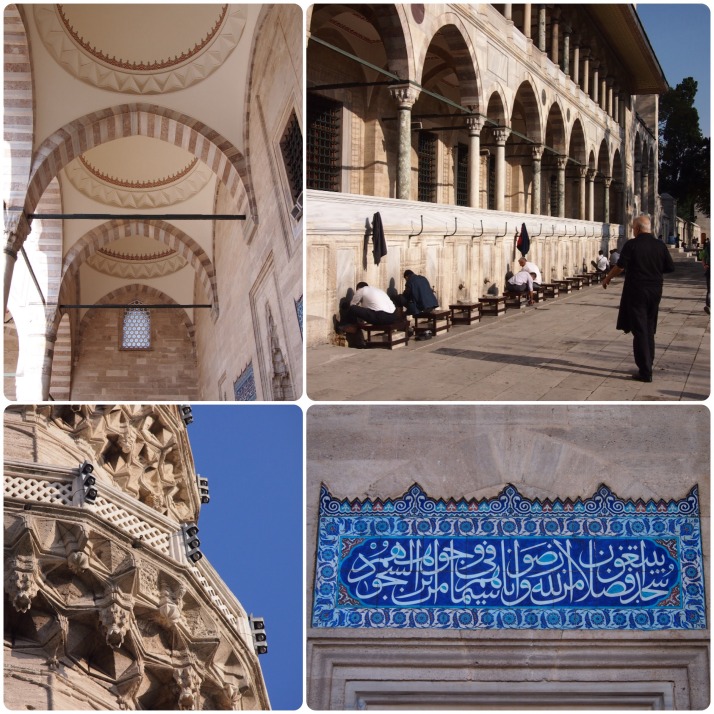 Exterior details (clockwise from top left): striped marble arches in the domed gallery around the inner courtyard; men perform their ritual ablutions before entering the mosque for afternoon prayers; calligraphy on bright blue tiles over one of the windows; stone carving detail on the balcony of one of the minarets 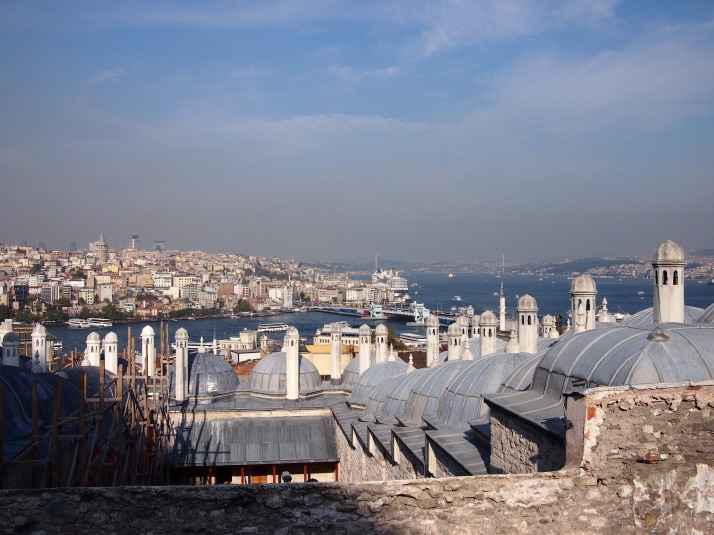 Its location atop the city’s Third Hill affords spectacular views over the domes of two of the mosque’s medreses, across the Golden Horn to Galata and down the Bosphorus Straits

The inside is just as imposing, it’s essentially one huge open space with the central dome soaring to 47m above the floor. I really liked the painting on the dome, the stained glass windows in the eastern wall and the huge metal circles of lights suspended around the room for illumination and which seem to be typical of all the mosques we’ve visited in Istanbul. The mosque is at the centre of a complex of buildings which were all part of the same religious foundation. These include theological colleges, a hospital and a hamam. For us one of the most interesting areas of the mosque complex was the graveyard. Including the türbes, or mausoleums, of Süleyman himself as well as his favourite wife, Haseki Hürrem. Known in the west as Roxelana she is judged by many to have had too much influence over her husband the Sultan. By pressing our noses up against the windows, we discovered that the türbes are beautifully decorated inside with stained glass and blue patterned tiles. 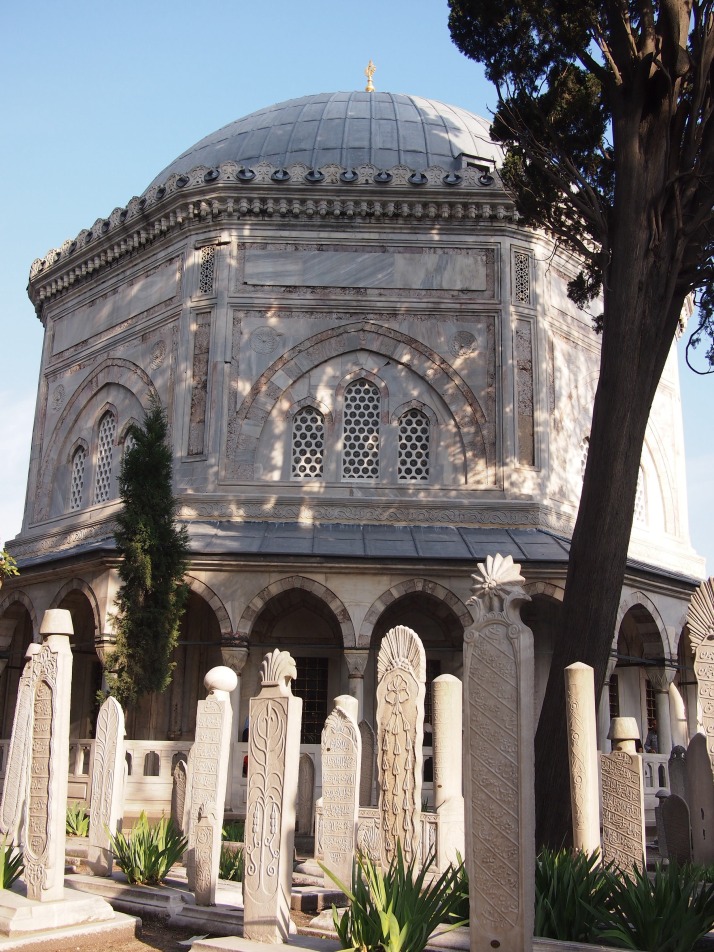 The türbe of Süleyman the Magnificent is surrounded by other graves

Sinan himself is buried on a corner to the northwest of the mosque in a mausoleum which he designed and built in the garden of what was his home.